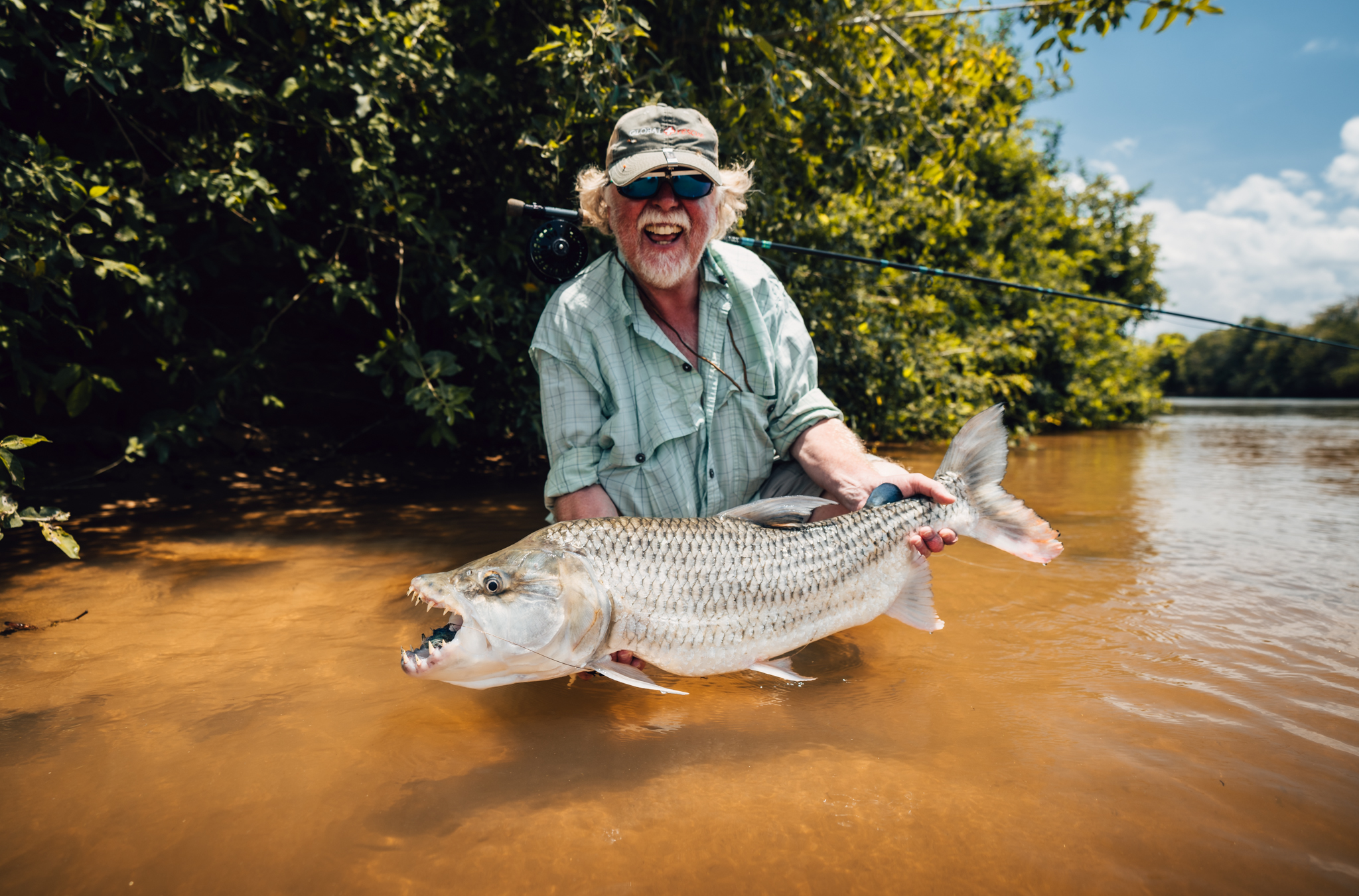 It’s been amazing watching the season build and tigerfish numbers increase, as the days continue to grow longer. Each of the rivers is changing in their own way and each offering unique scenarios in which we target Tanzania tigerfish. This week marked the first sighting of dragonflies on the water coupled with the first signs of spawning tigerfish. There’s no doubt that everything is starting to kick off into full swing. Bringing with it some of the most incredible tigerfishing one could hope for. Truly exciting times!

As is the case with Tanzania tigerfish, the feast and famine cycles on the Ruhudji continued. Periods of exceptional action, followed by periods of hard grind were the order of the day. Success came down to finding the type of structure, and the areas where the fish were holding, once this had been achieved it was a matter of cast rate and good hook sets that ultimately brought fish to the net. The timber of the Ruhudji proved to be the answer this week, fishing floating lines and pumas (a non-weighted bulky deerhair pattern, fished just subsurface) tight into structure proved most productive and great sport which was shared by all. There is nothing quite like seeing a heavy set tigerfish break cover and roll on a top water pattern merely meters away from the boat!

Despite the timber fishing incredibly well, a number of the Ruhudji’s famous deep outside bends had their own unique moments too. It was simply a question of finding the bends that were holding fish. The bends funnel large volumes of water around shallow sandbanks, often creating deep undercuts on the outside of a then bend, the bend then pinches creating deep and fast flowing slots where tigerfish congregate. Guests were rewarded for good casts and great line control.

Putting flies deep into the undercuts and in the pinches allowed for a host of memorable eats. Due to the volume and speed of water flow through these deep bends and the sheer power of a tigerfish , one can only grasp the brutality of a tigerfish eat in these scenarios by experiencing it firsthand. A feeling every angler needs to be exposed to!

All guests managed to land a good number of memorable fish once more this week on the Ruhudji, and a lot more were lost. Tanzania tigerfish that don’t show themselves due to hook pulls, tackle failure, user error etc, will always haunt us all. This is arguably the toughest part about tiger fishing, but also makes it so addictive. James managed to find some exceptional form this week and put numerous big fish into the net on the Ruhudji.

The most memorable was a 16lb fish coming right off of timber in a neat side channel. James was fishing a floating line coupled with a top water pattern tight into timber. It didn’t take much convincing before the fish tore out and inhaled the fly, James made short work of the fight and subdued the fish elegantly, resulting in a special memory shared between guest and guide.

Whilst the guys were cracking on and getting it done on the Ruhudji, the team on the Mnyera were having fun of their own. The Mnyera truly came into its own this week and what a special week it was. The ticket to the Mnyera this week was target the top ends of bends. Plus areas that presented clay features in deep water. The rapids, as always, did not disappoint and provided for some highly excitable fishing on both the boat and foot.

The guys managed to kick it off from the get go with Ronnie’s first fish tipping the scales at 20lbs. The rest was gravy for return guest Ron. What an incredible tiger fish. Ron threw a long cast up stream, working a particular clay pinnacle on a sinking line. Half way back, his line shot out of his hands in a way that could only mean one thing. A giant. We all knew, from the start that this one going to be special. The fish stayed deep whilst tearing downstream. However, it didn’t’t take long before this big hen went airborne, and man was it spectacular. Violent head shakes with the sound of rattling gills made for shivers.

Things were tense at this point as we knew we were in for something wild. Ron managed to keep his calm despite the sheer and raw chaos that all onboard were witnessing. Game on he said, and sure as anything, Ron expertly managed to put the fish in the net on the stroke of lunch hour. What a way to finish session one! Ron followed up with a number of special fish.  A great way to finish his three days on the Mnyera river.

Randy, also a regular at guest and good friend, similarly decided to jump in and got stuck into tigerfish from the get go, and managed to raise an incredible amount of tigerfish on one particular clay run. A session that I won’t be forget for some time. Randy was fishing Harley Shakes and Pumas on a floating line over the clay resulting in fishing coming up to the top water patterns almost every cast for the better part of an hour. He managed to net 6 fish in this period of chaos and have many other run ins with big fish, sadly shaking the hooks. Randy managed to save the best for last on his final day in the rapids, landing an 11, 14 and 16lb fish on the last day of his trip, the dream end to a week of tiger fishing for Randy! The eat from the 16lb fish will last an eternity.

Both Greg and John decided, like all good anglers, to also get involved and sample the big fish that were on offer for the week on the Mnyera. The two anglers were involved in a red letter morning. It was day two of their stay on the Mnyera and we were fishing middle beat. We stationed the boat on a clay shelf searching for tigerfish on foot. It took two cast and John was tight, the fish took off and immediately showed big fish presence. The fish turned and worked its way up shelf before going acrobatic.

The moment the fish jumped we knew it was of epic proportions. The fish continued to go airborne another six times before sadly shaking the hook. Heartbreak. John dusted himself and the guide off and proceeded to hook another good fish. The fish immediately ran towards the sand shelf and managed to run the fly out its mouth on the sand, another blow to both guest and guide.

The silver lining was that we had found an area holding big fish with plenty of time left. Greg stepped up and set hooks on a wonderful fish right after the second loss. Greg expertly steered the fish away from the sand shelf and put a stunning 17lb in the net. A chaotic and incredible start to the morning! John had his socks up and cast on point as the morning built into yet another special moment. We headed down river some 500 meters before setting up anchor on a tight clay bend.

We had decided to prospect the deep slow water in front of the bend when John’s fly line exploded into action. This was big, really big… there was a deafening silence on the boat. The fish dug deep with long extensive runs, all we wanted was to see the fish before anything else happened. The fish stayed true to its roots and hugged the clay tightly for the duration of the fight. After what felt like the longest fight yet, John managed to unsettle the fish. Not quite ready for the net, the fish shot off once more for the depths. This time we knew the proportions, heart in the mouth moments for all. Once the dust had settled, John was bankside with an incredible 20lb tigerfish, a truly momentous occasion!

A special fish to end a truly red letter morning. John went on to stick yet another absolute giant of a Tanzania tigerfish on the final day of the rapids tipping the scales at 20lbs once more, is there any better way to settle debt with tigerfish? Hats off to John and his hard work, it most certainly paid off in spectacular fashion!

It’s invigorating to see this systems grow and change as we welcome the summer in full swing up here in Tanzania. The guides are more excited than ever to sample the remainder of the season with this last week wetting the appetite that much more. What an incredible week, who knows what’s going to happen for the second half of the season? One thing we do know is that it’s looking good, really good, and we are justifiably excited. Click here if you would like to catch a Tanzania tigerfish of a lifetime! 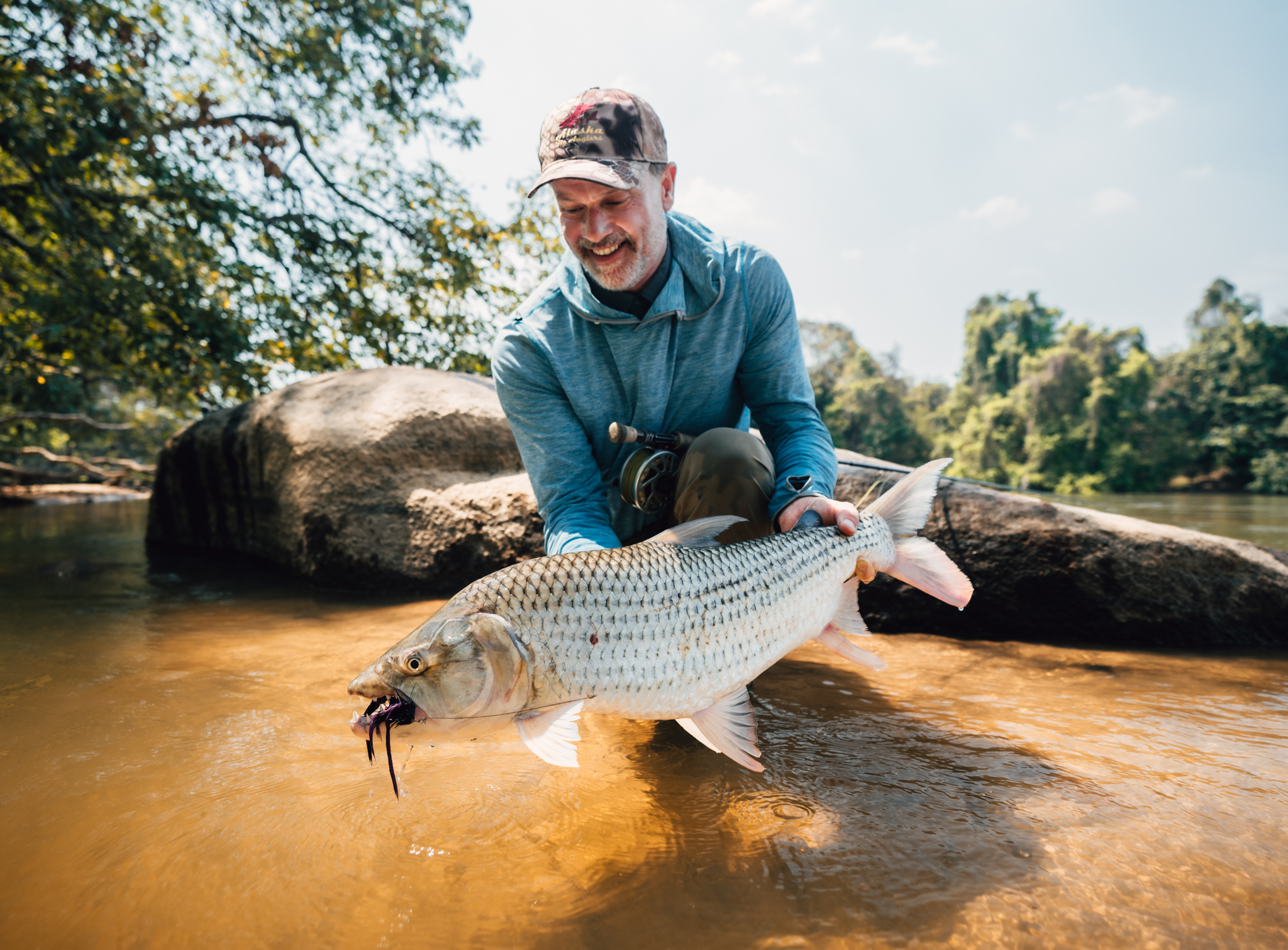 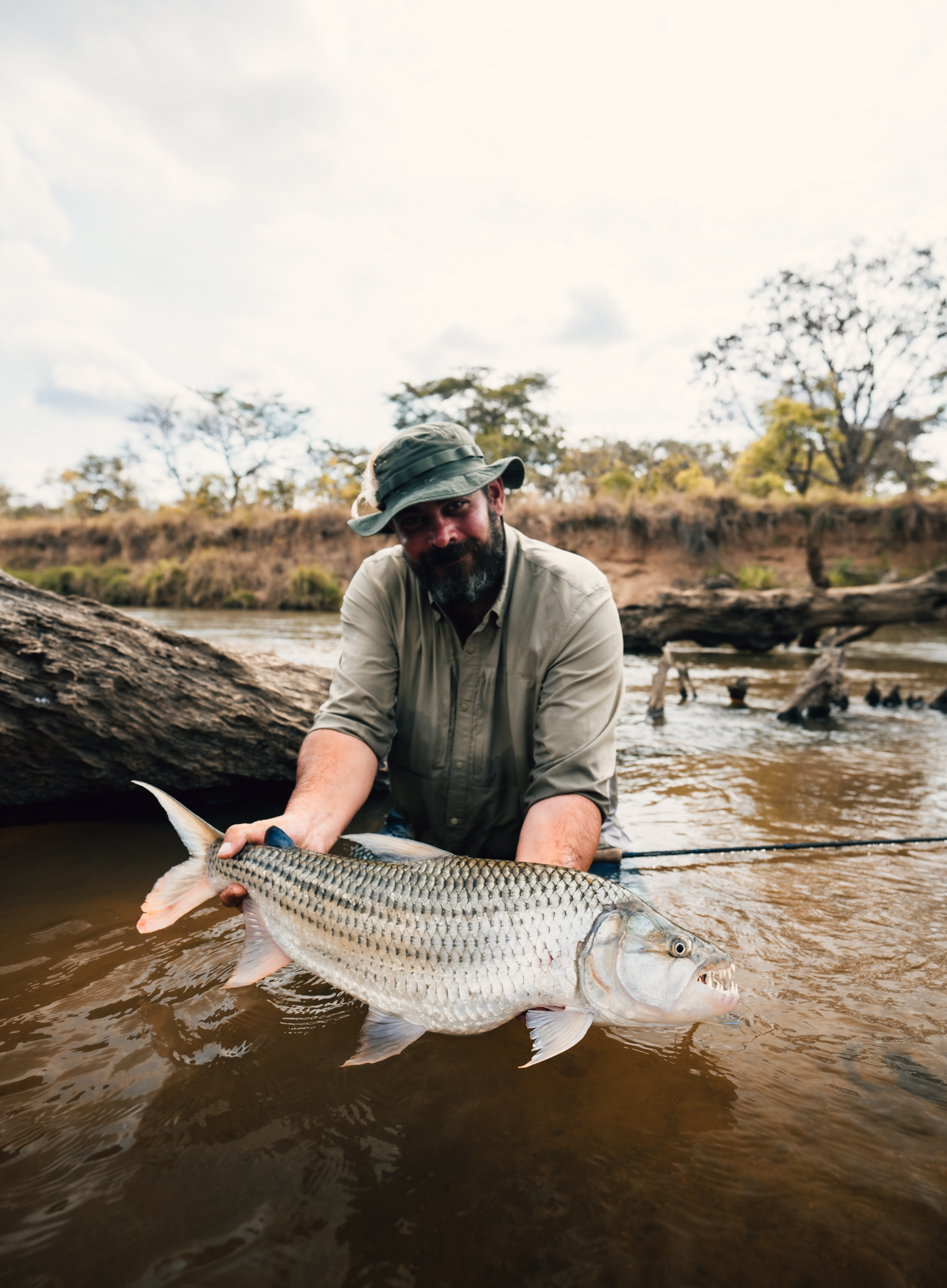 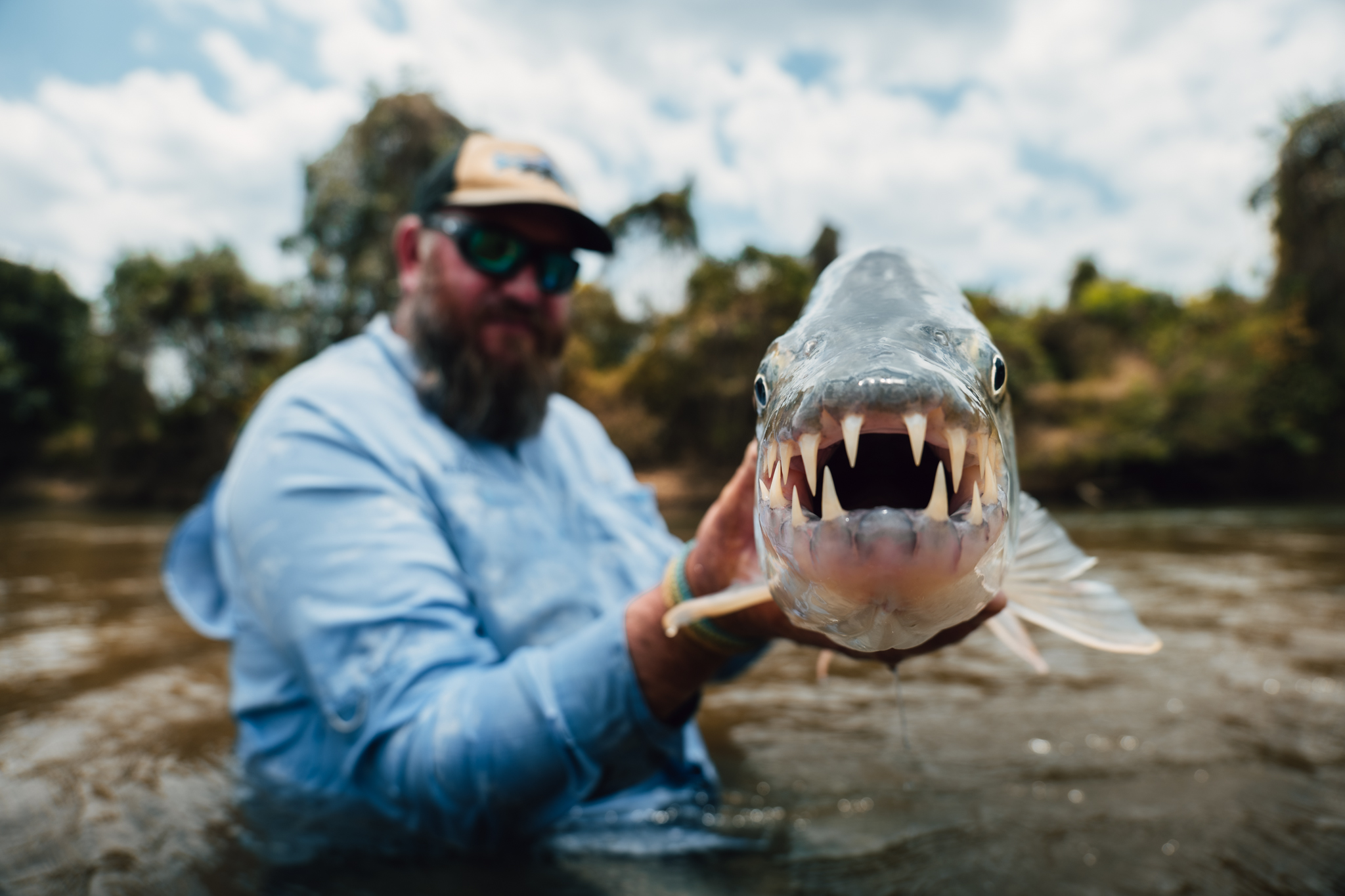 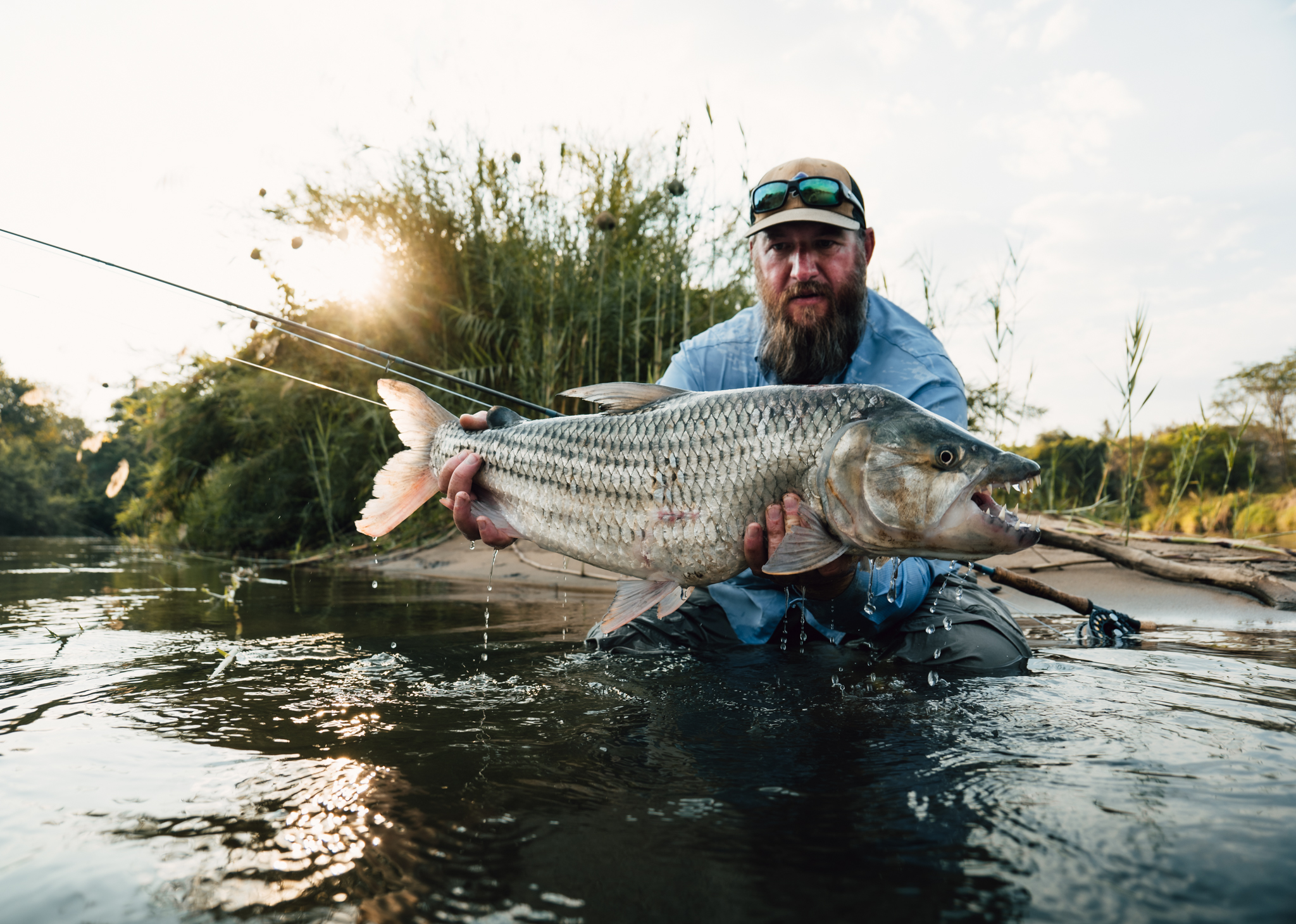