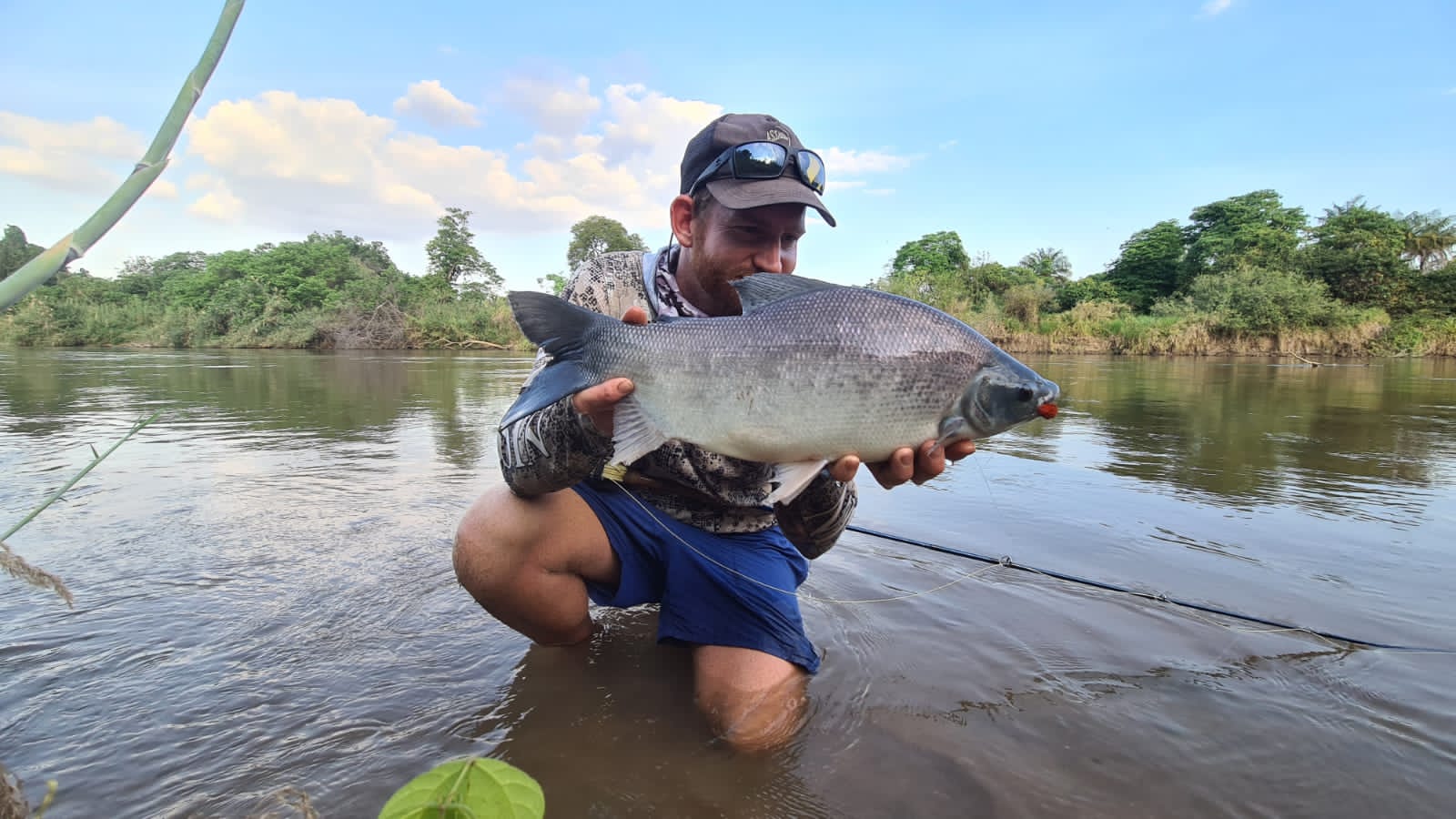 Before going to Tanzania, I had never even considered the possibility of successfully targeting any species of Distichodus on fly. However, this changed quickly once I arrived on the Ruhudji river for our Tigerfish season this year.

Distichodus petersii (ndungu) are a large, vegetarian/fruit-eating species and are abundant when the right conditions present themselves along the river. The right conditions being a fruiting fig tree which overhangs the water, and preferably a couple of birds or monkeys jumping around the branches and knocking fruit into the water. 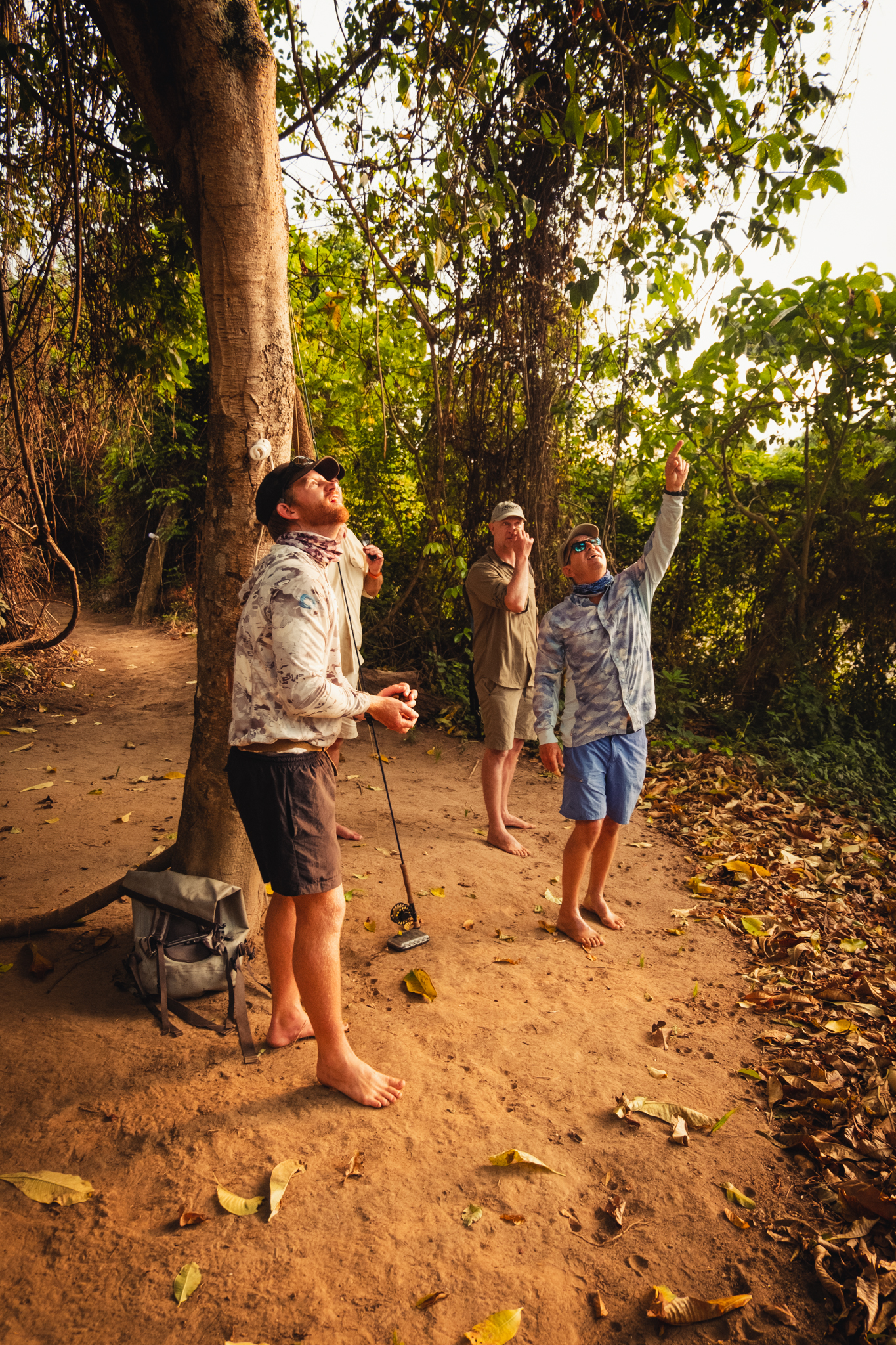 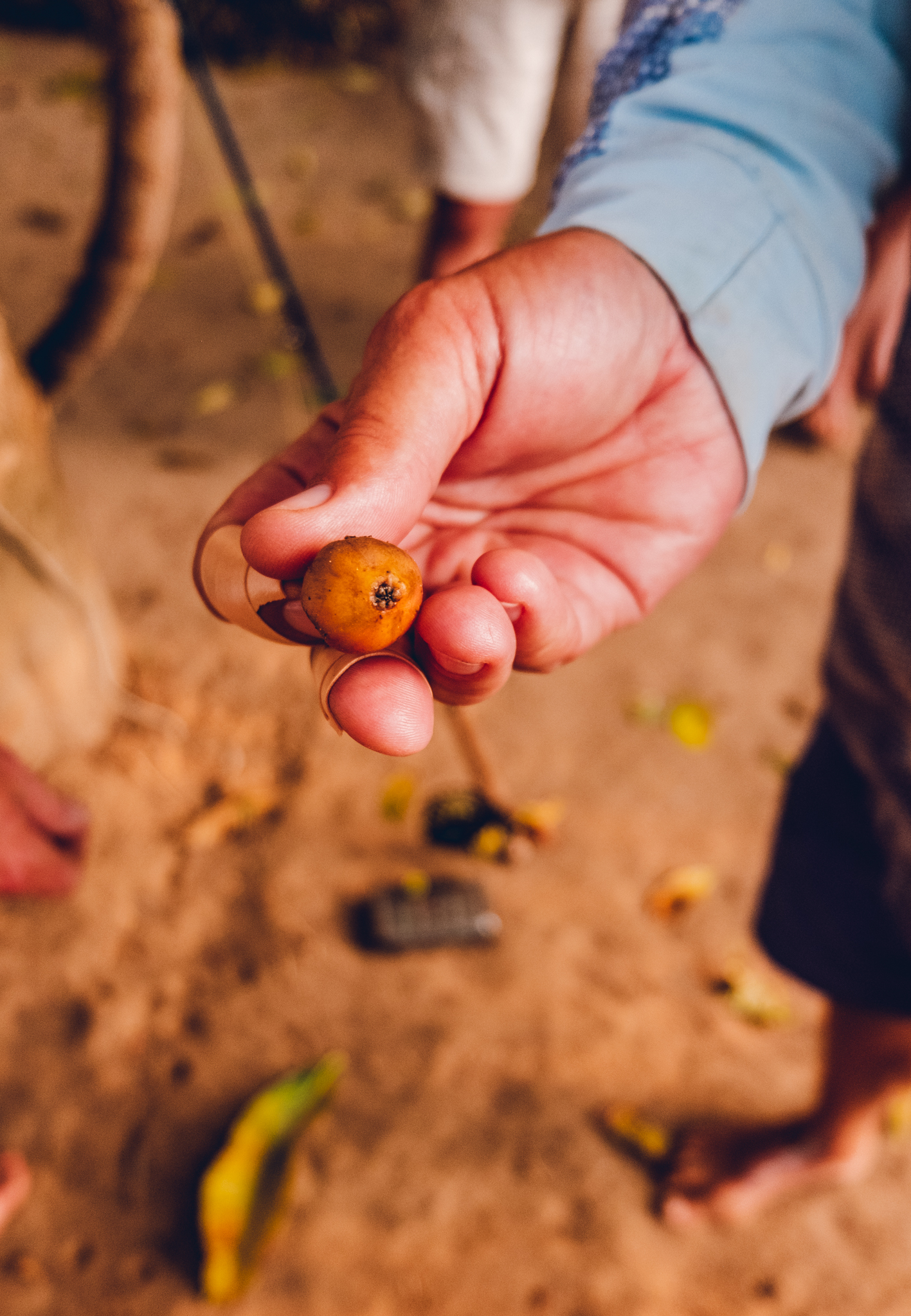 After cracking the code so to speak, the guests had a fun time learing about but also targetting these wonderful fish on fly

The first distichodus I had a chance at, was on a shallow bank (maybe 50cm of water) under two big overhanging fig branches. I thought in the shallow water it would be very loathed to come to the surface, but when a fig landed in front of the fish, it rose immediately and inhaled the fruit before returning to its position in the current.

Armed with a fig imitation (tied with spun deer hair on a #4 hook) rigged to my 5wt outfit with 8lb flouro tippet, I snuck into position and launched the fly just above the fish in the current. The fish rose immediately and then followed the fly downstream, staring at it from about 5cm away, while I held my breath. It then came closer before sucking only half the fly into its mouth. I got so excited and tried to set the hook, but missed the bite completely, sending the fish back down into the deep with a big tail splash.
I was devastated and thought I had successfully ruined my only chance at one of these fish. Then to my amazement I saw the same fish swimming back upstream into its original holding position.

Obviously, it was still interested in feeding but was now a lot more wary. Over the course of the next hour and a half, I managed to tie 4 different flies, and presented each in turn to see if there was any interest. The 4th fly I tried was a small bright green fig pattern on a #12 hook. The fly landed nicely upstream of the fish and as it drifted overhead, she rose and ate the fly without a moment’s hesitation. I set the hook gently yet firm, and it took her half a moment to realize what was happening before charging off into the current with a few sweeps of its massive dark tail. Almost 10min later I finally got her out of the current and into the shallows where I could finally breathe a sigh of relief and admire this amazing fish. 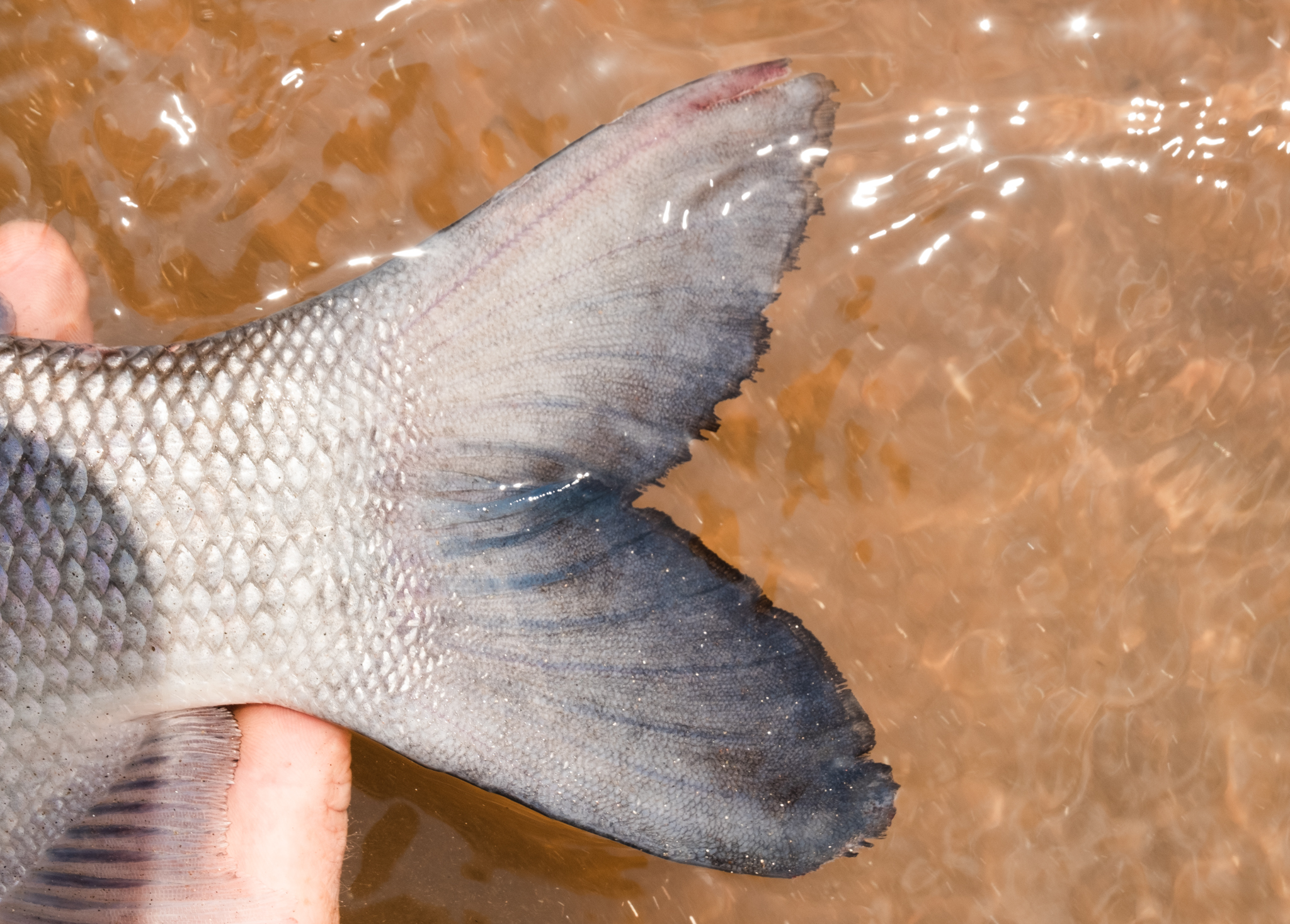 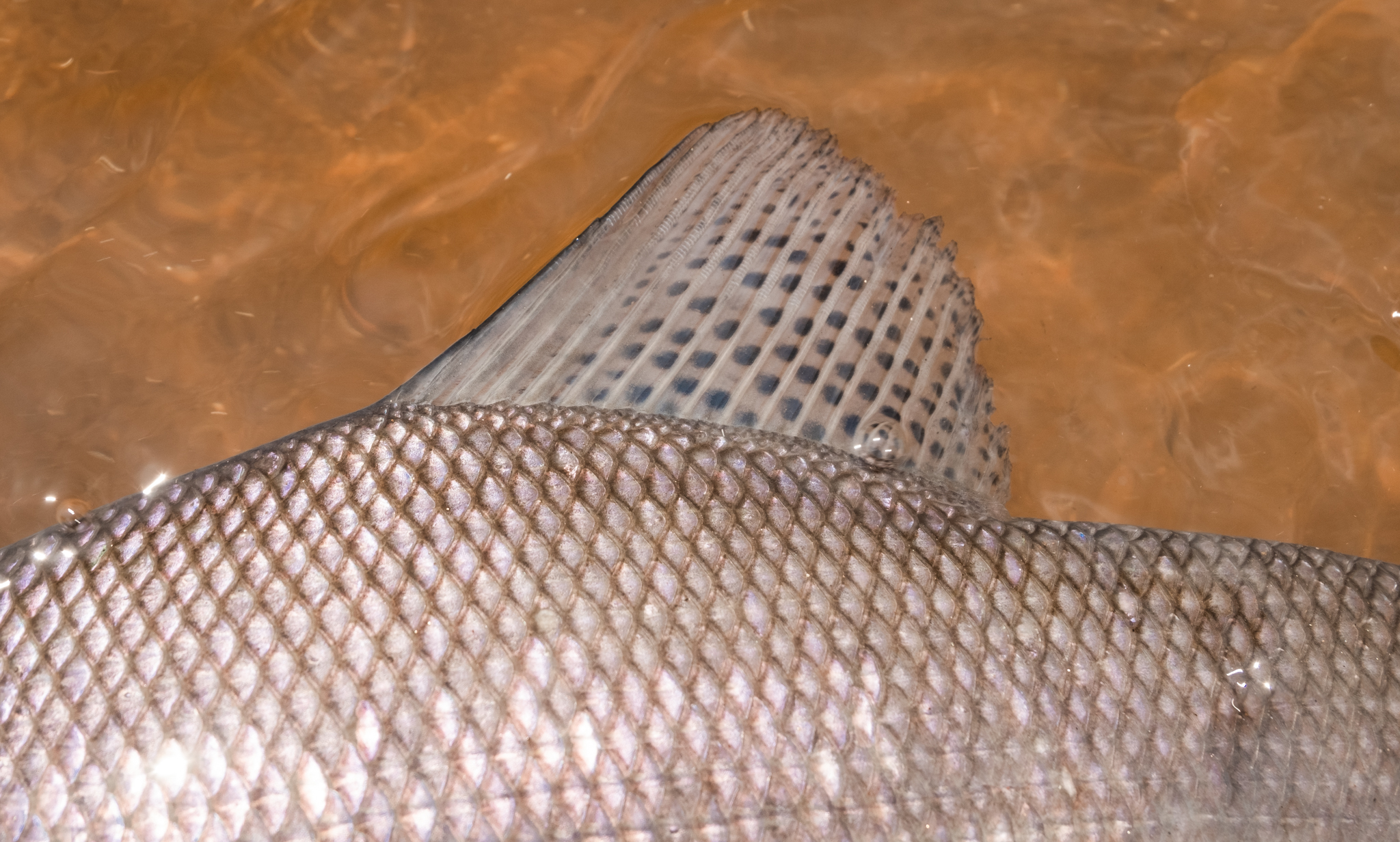 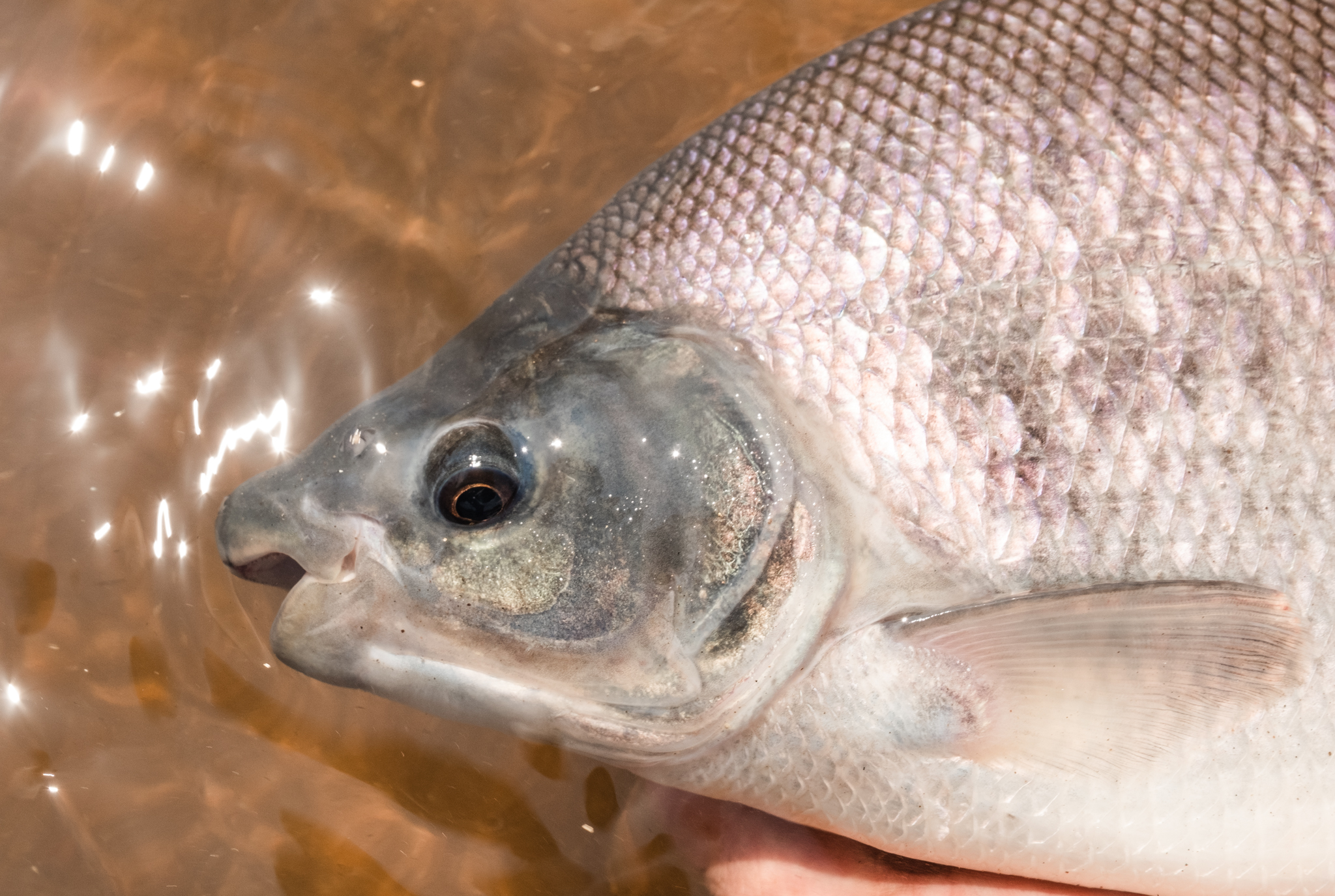 The tail is massive and makes trying to bully this species almost impossible. The eyes are also big and after watching the behaviour of other specimens later, I realized they have amazing eyesight and spot you or any other threat on the bank a mile away. So, a stealthy covered approach is vital. They have a very peculiar mouth with several rows of small rasping teeth and upon placing my finger between the jaws, I discovered they have impressive crushing power, obviously for cracking or squashing fruit and berries before swallowing them.

Smallish spun deer hair flies in the shape of a fig that floats worked well but later I found the same flies with a 3mm tungsten bead tied into the body, making the fly sink slowly, worked way better. Even when the fish weren’t feeding actively, if you allowed the fly to sink and drift through the deeper holes where the fish were hanging out, it would produce a bite.

This is a species I will very highly recommend anyone to try their hand at it if the opportunity arises. They are a fish that very few people have managed to tick off the species list and are a very worthy adversary on a light flyrod rod. 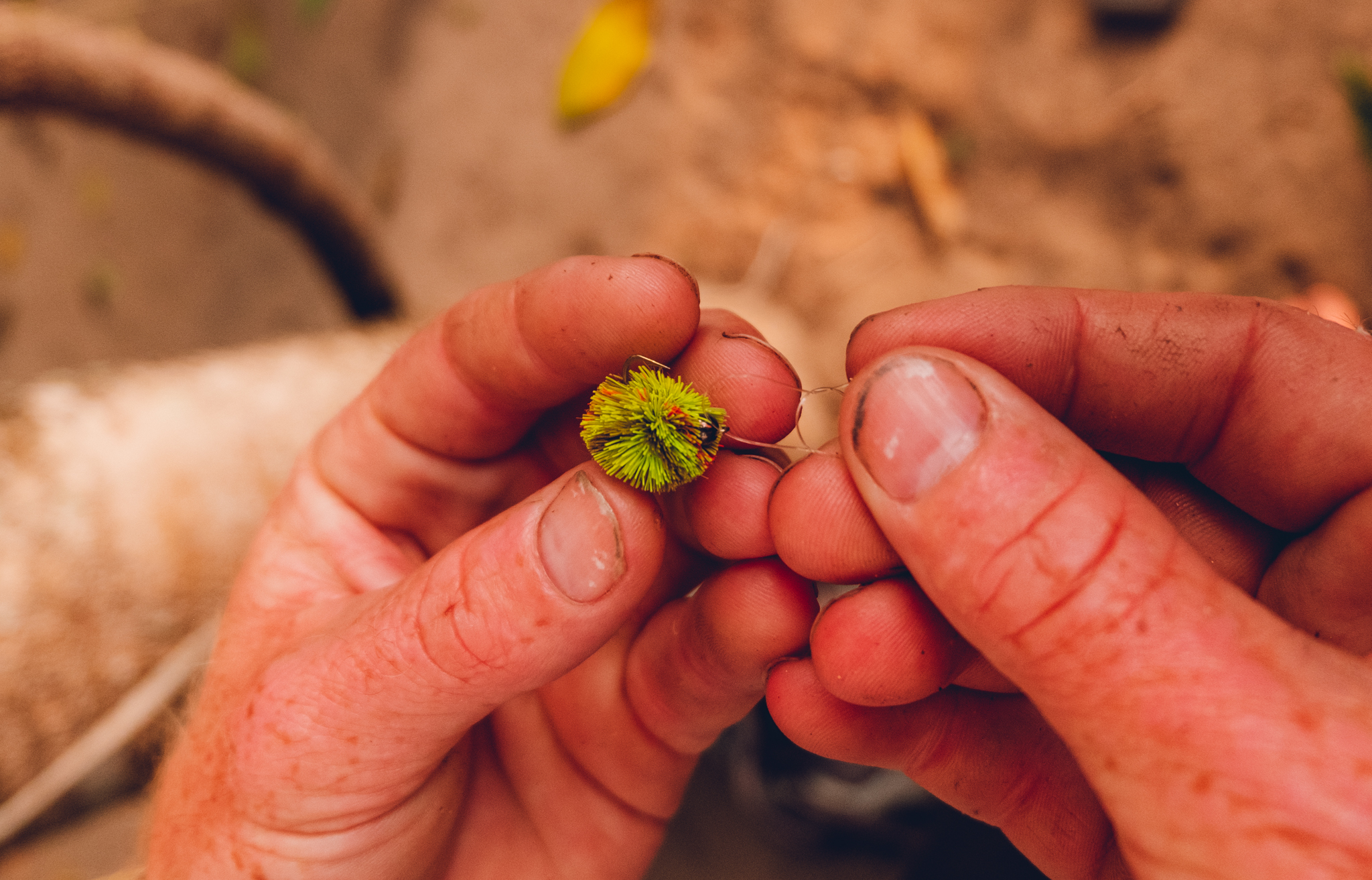 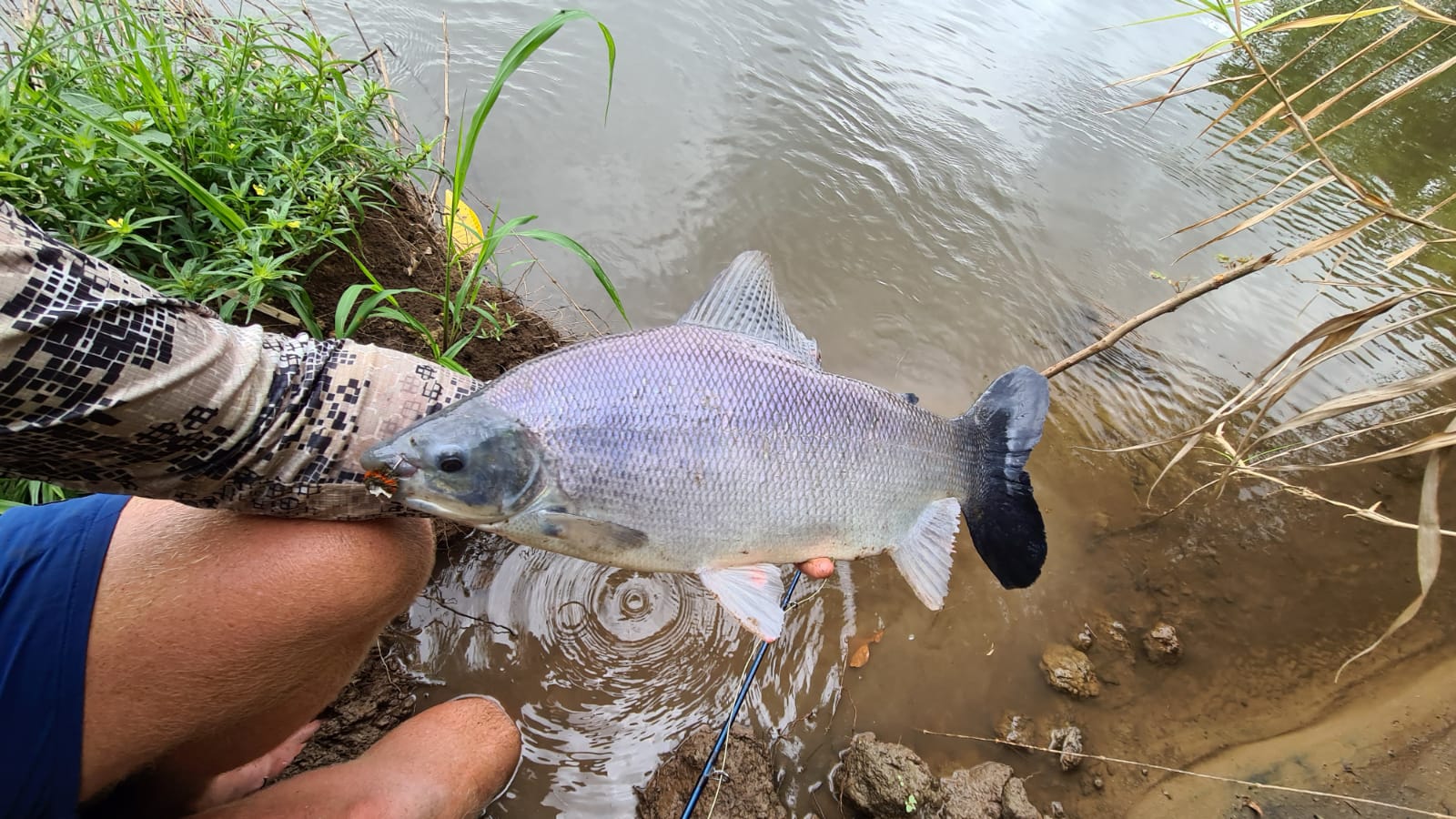 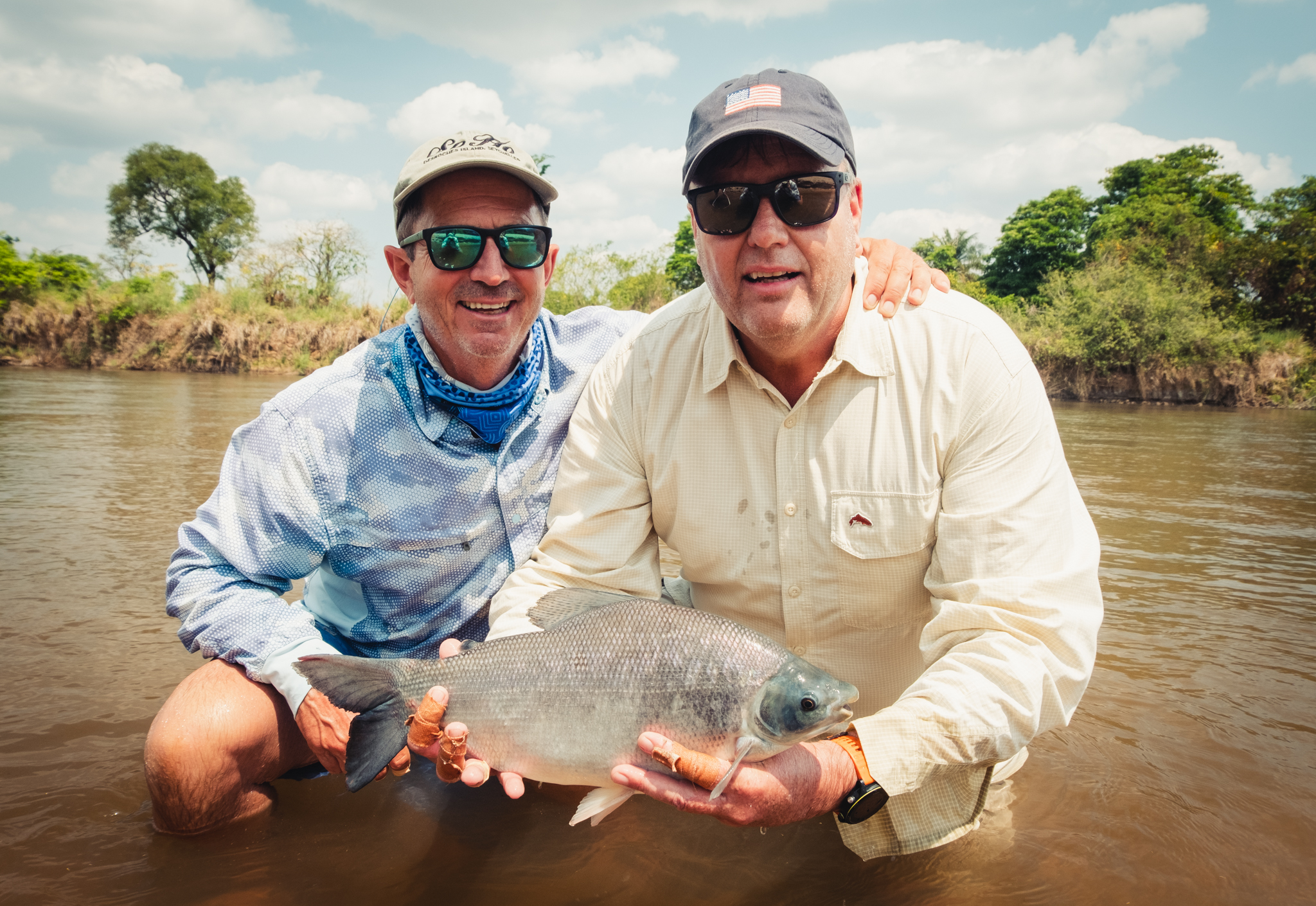 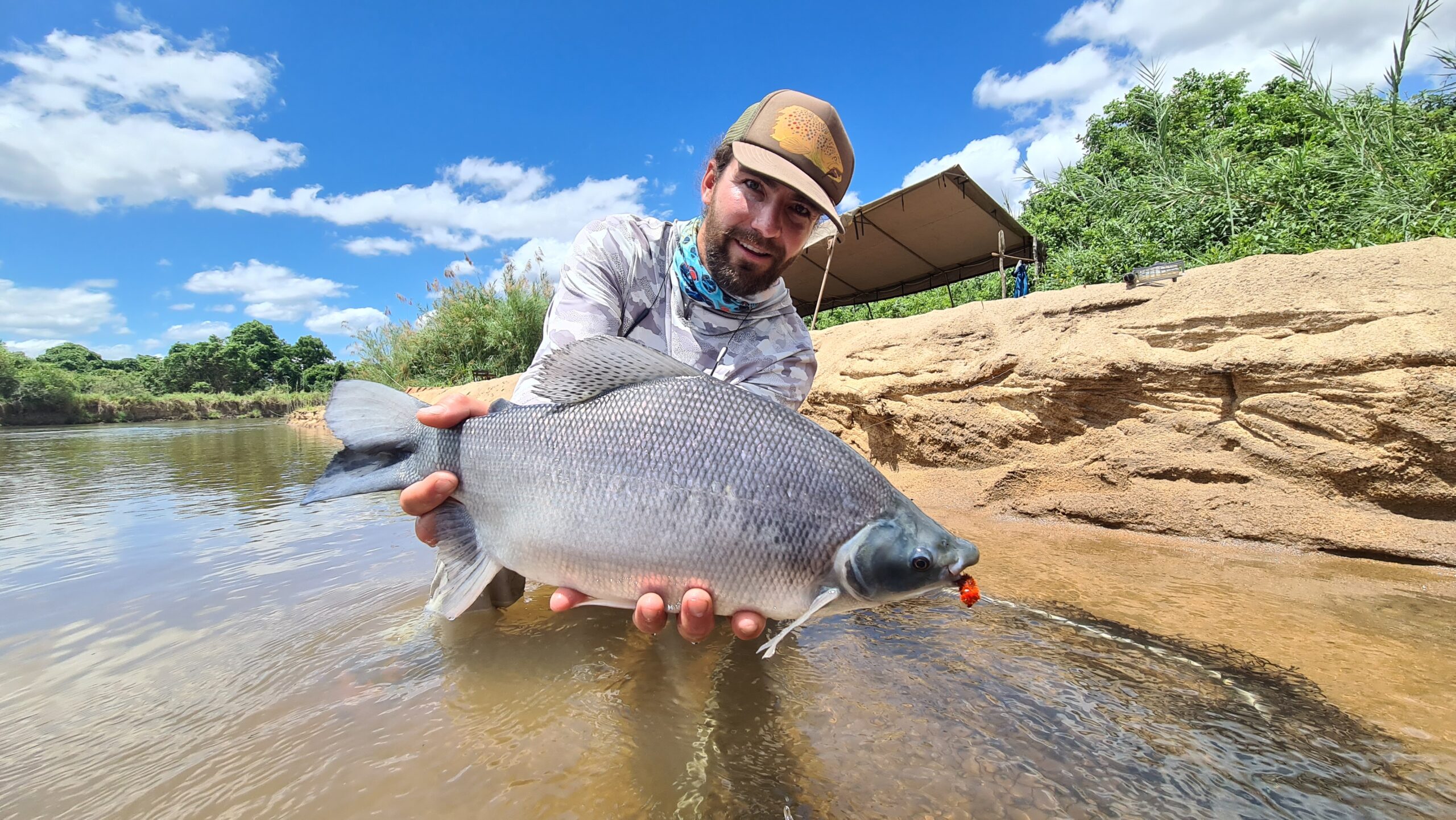 Some very happy guests with a new impressive species ticked off their list.