Week 4 of the season we welcomed onboard the South African trio of Jay Smith, John Toich and Richard Gorlei. They were joined by German guest Steffen, and TF’s Tanzanian guide Greg Ghaui. Other than John, everyone had fished the Nubian Flats over prior seasons.

With the weather forecast still looking good, the plan for the week was to head straight north to Shambaia, then if the weather allowed, head even more north the Khor Shinab. An area we had not yet been able to go to this season.

Upon arrival at Shambaia on the first morning, we were greeted by a really strong current that almost looked like rivers flowing around the coral heads. We wasted no time and headed for the pinnacles. It did not take long before GT’s in all shapes and sizes were coming in on the tease, angry and ready to crush everything in sight. Richard managed to hook into a real monster on the inside of Merlo and everything looked really promising but after a good fight, his knot on his fly came undone. Everyone managed to tussle with some more GT’s but these fish were getting the better of everyone. Jay managed to keep the scoreboard ticking over however as he put the heat onto the bluefin trevally, managing to land SIX very descent fish.

The afternoon session was quite slow compared to the morning as the wind started to pick up and blew our only shot of going to Khor Shinab right out of the window. Greg salvaged the afternoon for the guys and sight-fished a very nice bohar snapper right before the end of the day. 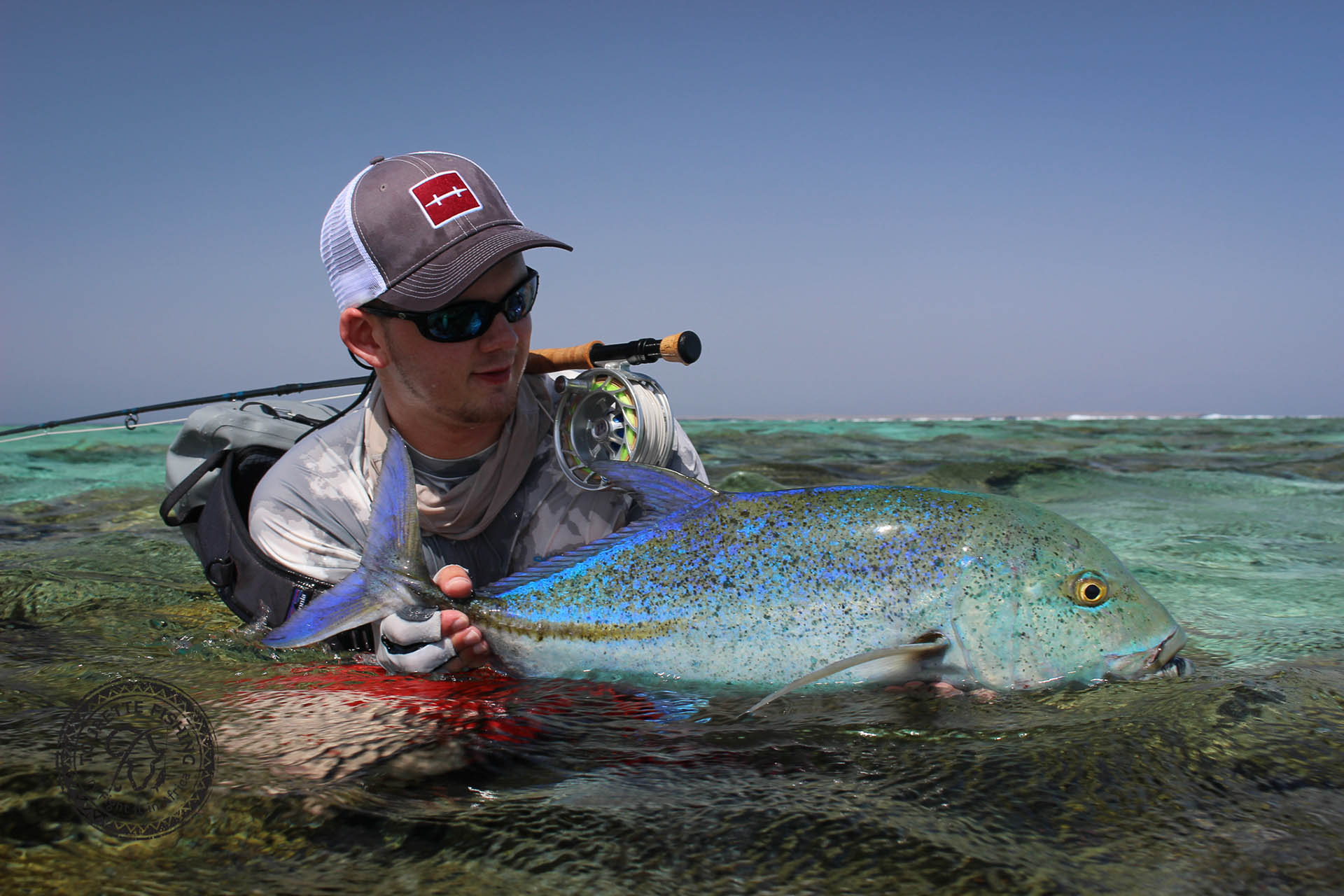 bluefin trevally, one of the most beautiful saltwater flyrod species on the planet

The morning of Day 2 we woke up to even stronger wind but still manageable. The current was still going but the wind and swell made the crossing to the pinnacle a very wet and wild one. John and Richard walked the surf side on Abbington hoping to spot some trevally while Jay Smith fished blind over the edge on the inside. His white NYAP got so much attention that guide Mark had to craft more NYAP’s on the go by cutting up bits and pieces if other flies and UV glued them together. GT’s, bluefin trevally, snapper and coral trout were attacking the fly with gusto. The hook up to landing ration was not looking so good though. The edge on this atoll is so fowl that you need the biggest dose of ‘good luck’ just to land a small fish. None-the-less, Jay was having a ball, which in the end, is all that counts. Over at Angarosh though it was slim pickings for Steffen and Greg as the weather was pushing the fish down.

The wind grew even stronger overnight and by the start of Day 3, we were forced to cancel our plans to fish the atolls as the wind made the sea to wild. Unfortunately these things happen. We took this opportunity to tie up some flies, re-rigged rods, and made we were 100% ready and prepared for our next session out.

Late in the afternoon the wind gave us a small break and we jumped onto the tenders. We headed out to the coral heads just north of the mothership, where a brute of GT appeared under the one tease. Both anglers made perfect casts behind the tease and before the flies even started moving, a beast GT inhaled Greg’s fly and then raced off into the deep at a frightening pace. Italian guide Fede grabbed the boat quickly and soon the guys were offshore, fighting this fish from the safety of the boat. Trying to fight a fish of this size on terra-firma while he is swimming over the edge in the deep, is almost guaranteed to end in tears. After what felt like forever, Federico grabbed the fish by the tail. A real monster! The guys were lost for words, especially Greg-who on his first trip out in 2014, missed out on a photo of his then PB GT of 98cm, which got away while the guys were getting ready for the pic. However this time round, everyone made sure Greg got his photo as this fish deserved some real bragging. 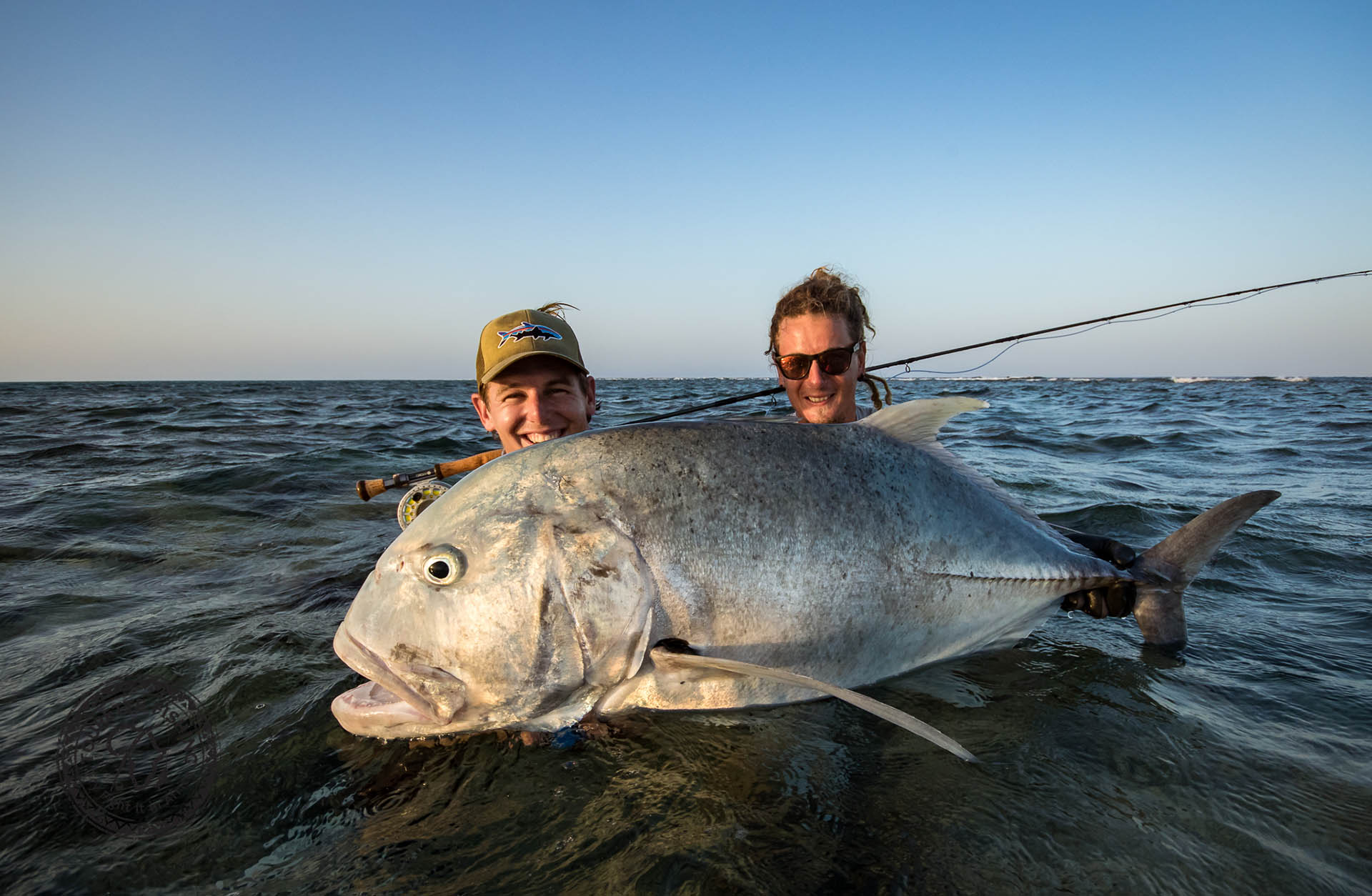 Greg(left) and guide Federico with the monster GT 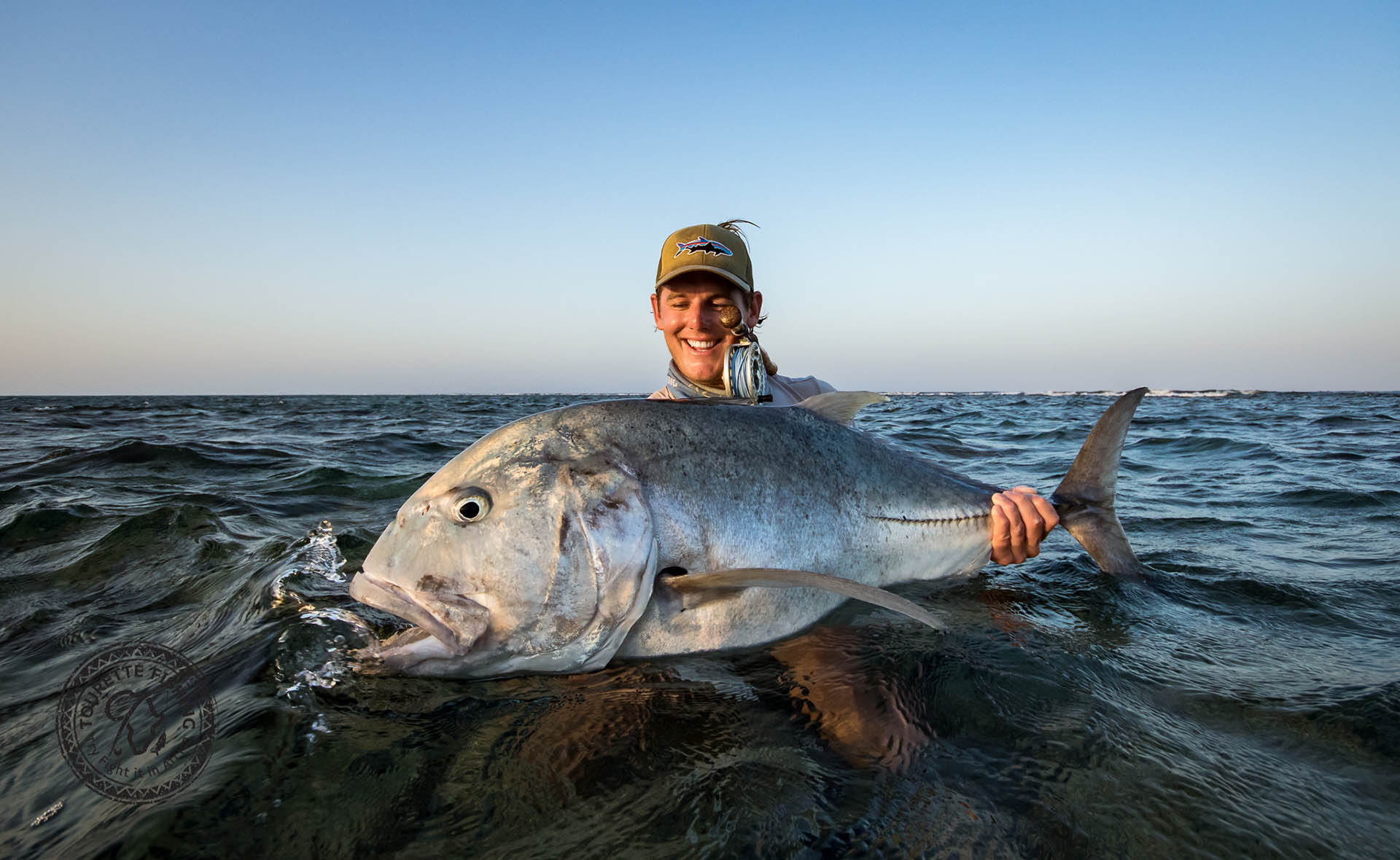 For the second half of the week we moved a little more north to Ras Abu Shagrab where we fished for Day 4 & 5 before moving down to the island Magarsam for the final day.

The triggers were out on the prowl around Ras Abu Shagrab and the lads took full advantage of this. Steffan netted FIVE triggers in the one session (including a trigger slam consisting of a yellow margin, titan, and a picasso). Jay landed a very nice yellow margin right after he missed a shot at a really nice bonefish, while Richard and John also ticked off triggerfish on their species list.

On the second last day the fishing slowed down considerably compared to the previous day but the area around the lagoon mouth still produced fish. Some small GT’s, bluefin as well as a big barracuda were landed.

On the last day on the flats around Magarsam the stars aligned somewhat for the guys. Split into two teams, Greg and Steffen tackled the eastern side while the others headed to the West. The fish were out on the feed and the guys had a really good hooking ratio, hooking almost every fish casted to, but the landing ratio was not in anyone’s favor, other than the fish. On the western side, the guys hooked eight triggers but didn’t land any! The flat was quite shallow so the majority of these fish were feeding right on the edge over very foul coral. 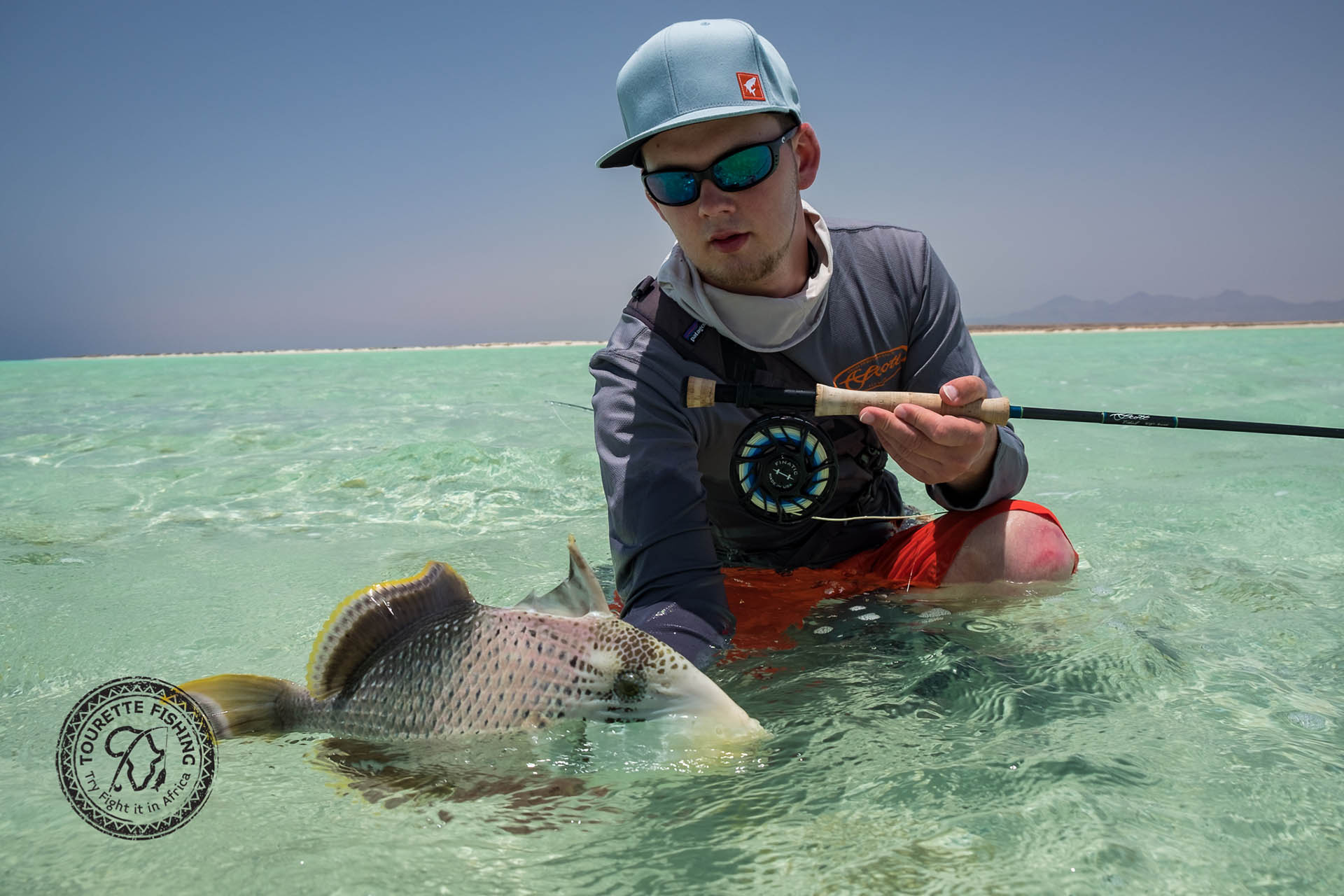 The trigger master Steffen. He really brought his A-Game to Sudan

On the eastern side, Greg and Stefan were not having much luck either. They did not get many shots at triggers, but ran into plenty trevally. Loads of bluefin and small giant-trevally were making the most of the cooler water on this side of the island and kept the guys entertained. Greg had a shot at a good GT midmorning but the fished missed his fly completely. Not long after, Stefan’s had some misfortune as well, pulling the hook on a good GT, as well as losing an estimated 15kg barracuda that bit through his leader after a short explosive fight. Steffen manage to salvage his day by landing a good titan triggerfish right at the death, and in so doing bringing a week of fairly erratic fishing to an end.

A big thanks to all our guests this week. It was a pleasure guiding you, and great to share the magic of the Nubian Flats together again. 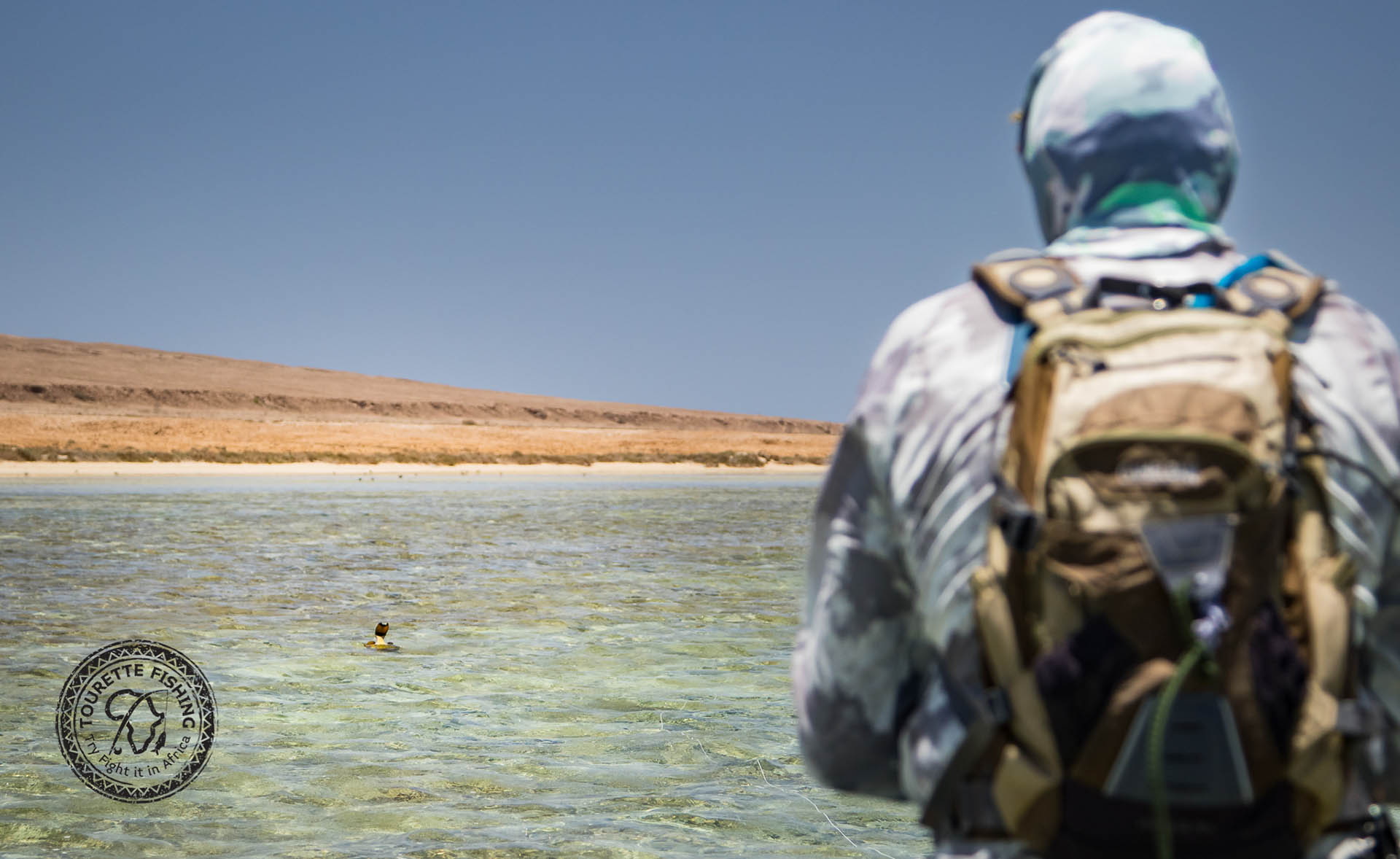 Tailing triggerfish, a sight that will get any fly fisherman weak at the knees 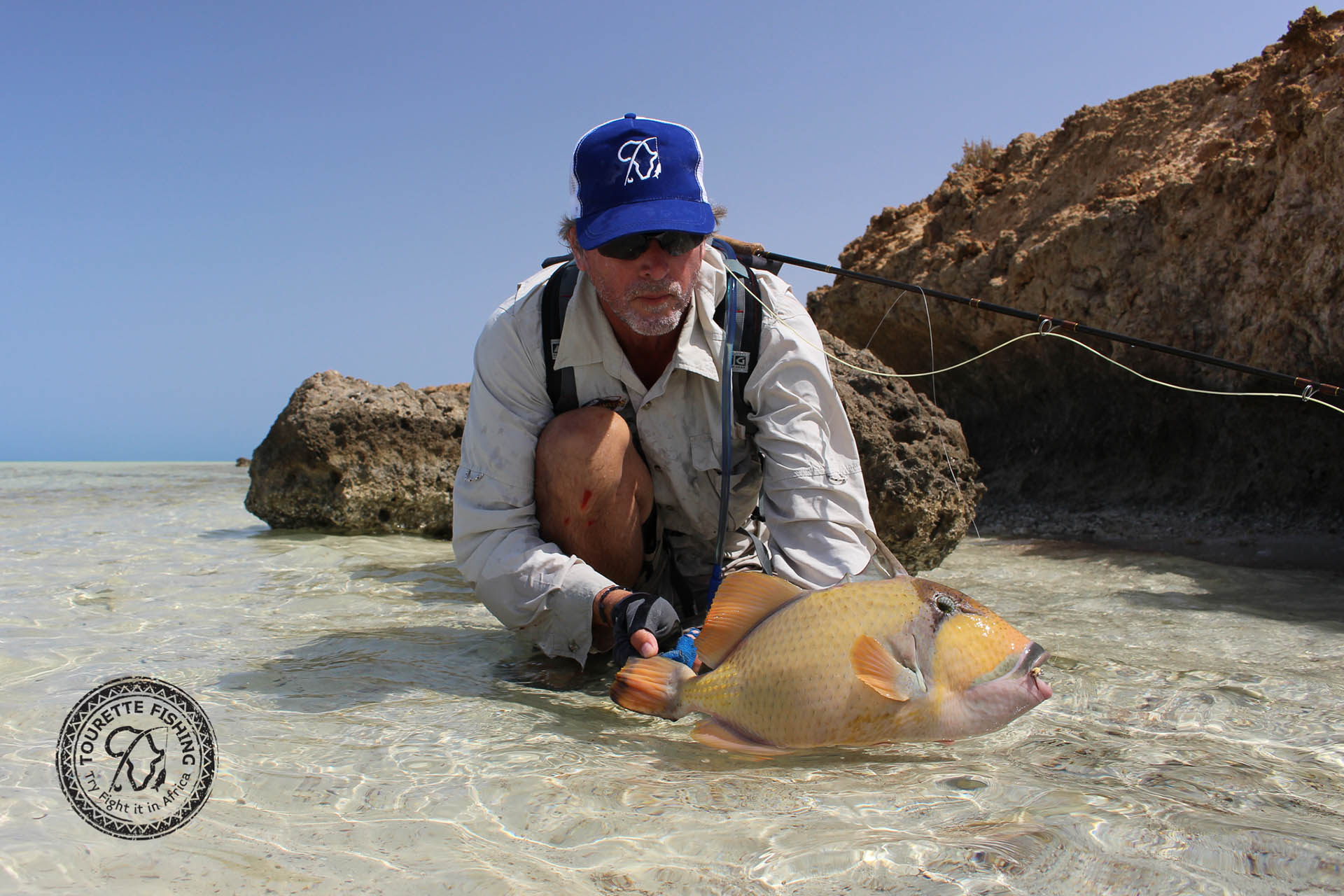 Richard with a nice Titan Triggerfish 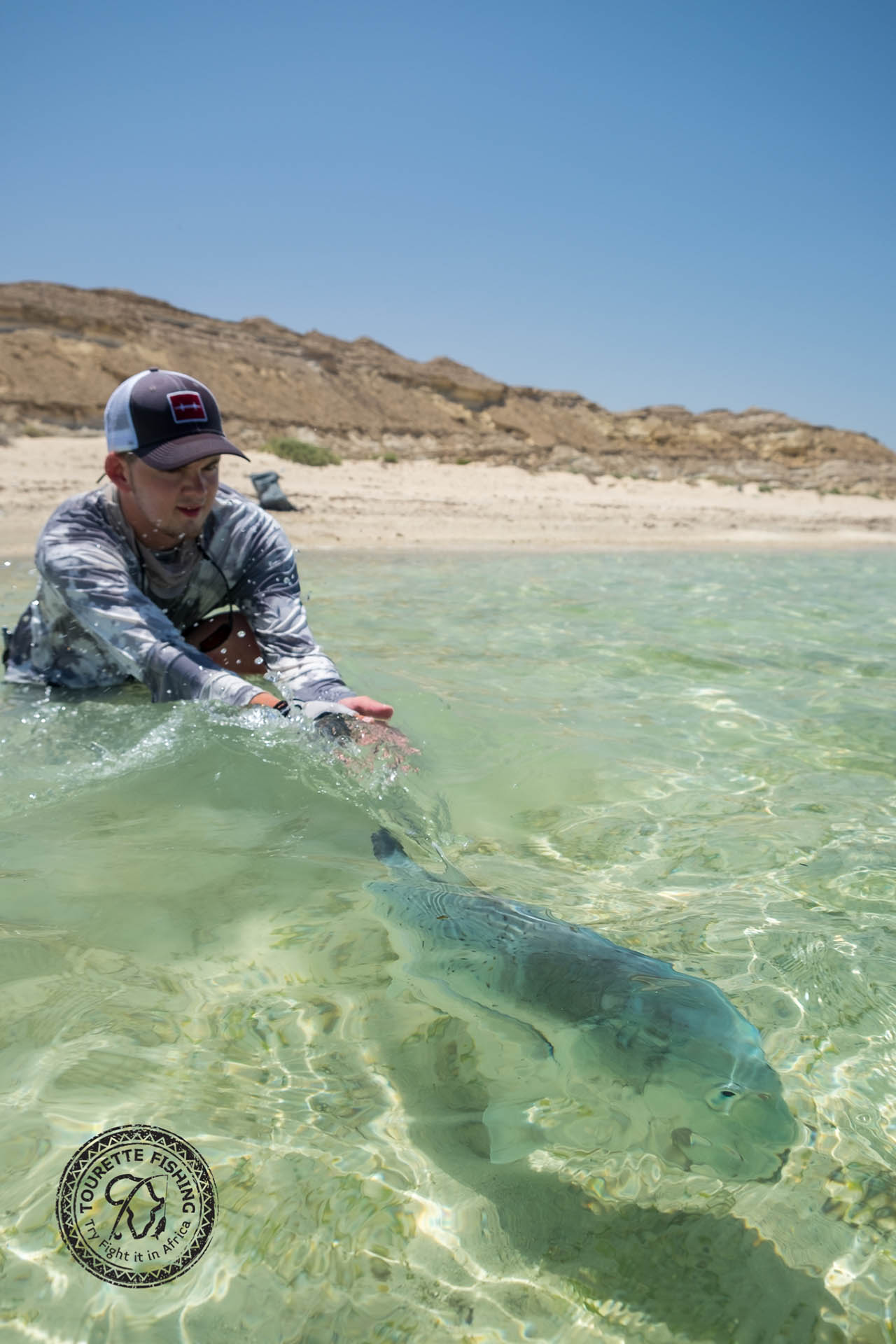