For the second week of the 2016 Nubian Flats Season we welcomed onboard an all American group. Returning guest Mike la Sota was joined by his friends Russ, Matt, Mike, Josh, and Wade. A reall great bunch of guys with an even greater sense of adventure. So after the briefing everyone got settled in and marked the start of a ridiculously fun week.

After some careful consideration and planning according to the weather forecast, we headed north on the first morning to our first anchorage for the week at Ras Abu Shagrab. This area has some huge coastal flats and can produce some world class fishing.

There was a huge north current pushing over the flat and this was textbook GT conditions in the Red Sea. For some bizarre reason though, we did not bump into any on our walk but as luck would have it, a shoal of 30 odd GT’s came swimming along where our trusty boat driver Mahmood was waiting for us on the flat. But this did not faze us as the flat had a couple more tricks up its sleeve. About two hours into our walk and numerous shots at triggers, we spotted some bonefish moving out of the shallows. We managed to hook one at our first attempt but sadly broke off on the eat. Shortly after though, Russ hooked into and absolute brute of a bonefish, which gave him a spectacular fight. Lady Luck was not on our side and this fish, estimated at +-13lbs, came unbuttoned right at the net. This defeat was taken well however and the guys gave each other a strange mixture of high-fives and comforting pats on the back. Loosing a fish at the net is sort of a win but in hindsight, managing to get the eat and watch that fish rooster tail into the distance was a victory on its own and more than satisfying. We saw one more massive bonefish that we miss-took for a GT in the deeper water, but did not manage to show a fly to.

After lunch we thought our luck might make a turn for the better and soon Mike la Sota hooked into another 10lbs bonefish. He got a very good hookset and soon this fish was racing over the flat. Lady luck was still not with us. Somehow Mike managed to bump his spool with his hand halfway through the fish’s first run, which sent the fish quite spectacularly into the air before snapping the tippet. In-between all the bonefish chaos, Matt kept the team’s score ticking over and landed himself a very beautiful yellow margin triggerfish and some snapper on the tease. 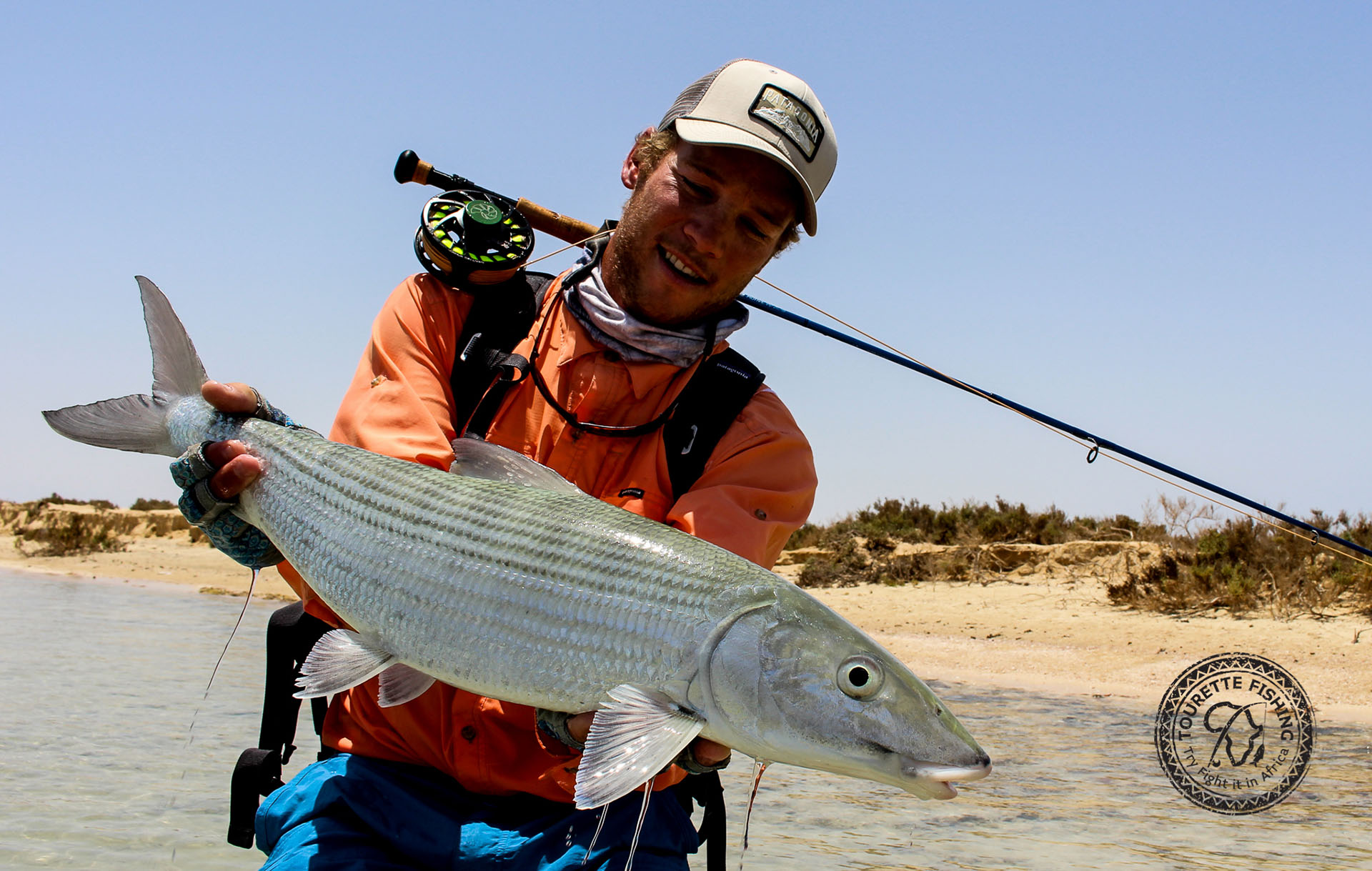 By day two the current slowed down and so did the fishing. The difference was like day and night but the guys were undeterred and carried on with the job at hand. The lads managed to land some nice triggerfish. Matt, Wade and Josh all went tight into triggers and converted. The story of the day had to go the Josh. He decided to turn the tables on the bonefish very casually and hooked into a 9lb bonefish, but this time round, pulled it right into the net. Everybody was beyond excited and this moment served as the turning point of our luck.

The morning of Day three, Team America got a full introduction into just how incredible and intense the offshore pinnacles can be! Or as fellow Italian guide Federico puts it “being rape-ed”. As per usual we split into two teams with Mike L, Josh, and Matt on Angarosh while Mike, Wade, and Russ headed to Merlo.

After a giving the guys a very thorough briefing on what to expect, the guys on Angarosh waded cautiously out for the first tease. With a strong current from the south we had high hopes and we were not disappointed. On the second tease we had 10 Geets (all over 90cm) come racing up the wall in a V-formation behind the teaser. Like pro’s, the guys kept their cool and everyone presented perfect casts which almost instantly turned into organised chaos! Josh hooked the biggest GT, in access of 100cm, which immediately popped his flyline on the hookset. Both Mike and Matt managed to turn theirs before the edge but Mike’s fish tried one more rush and just managed to get its head over the edge and parted his 150lb Seagar leader like it was cotton. From over on the left came a loud high pitch singing noise which wasn’t Matt but his line on full lock down being pushed to its limits as his fish was trying the same tactic. As he turned the fish again, he received massive applause from the beaten anglers to his right and an even bigger applause when the fish surrendered and got tailed grabbed. This is where teasing turns into a team sport as any fish landed is a team fish. The rest of the morning we sighted 8 more big GTs cruising the flat on Angarosh while staking out the waves on the wild side. We had four shots at them but unfortunately didn’t connect with any.

The team on Merlo’s story was just as savage and dramatic as ours. They returned with all their fly lines broken by GTs. After putting his head under water and looking over the edge with his mask, Italian guide Federico actually made the call to stop fishing on Merlot as the fish were just to big to land under the circumstances. 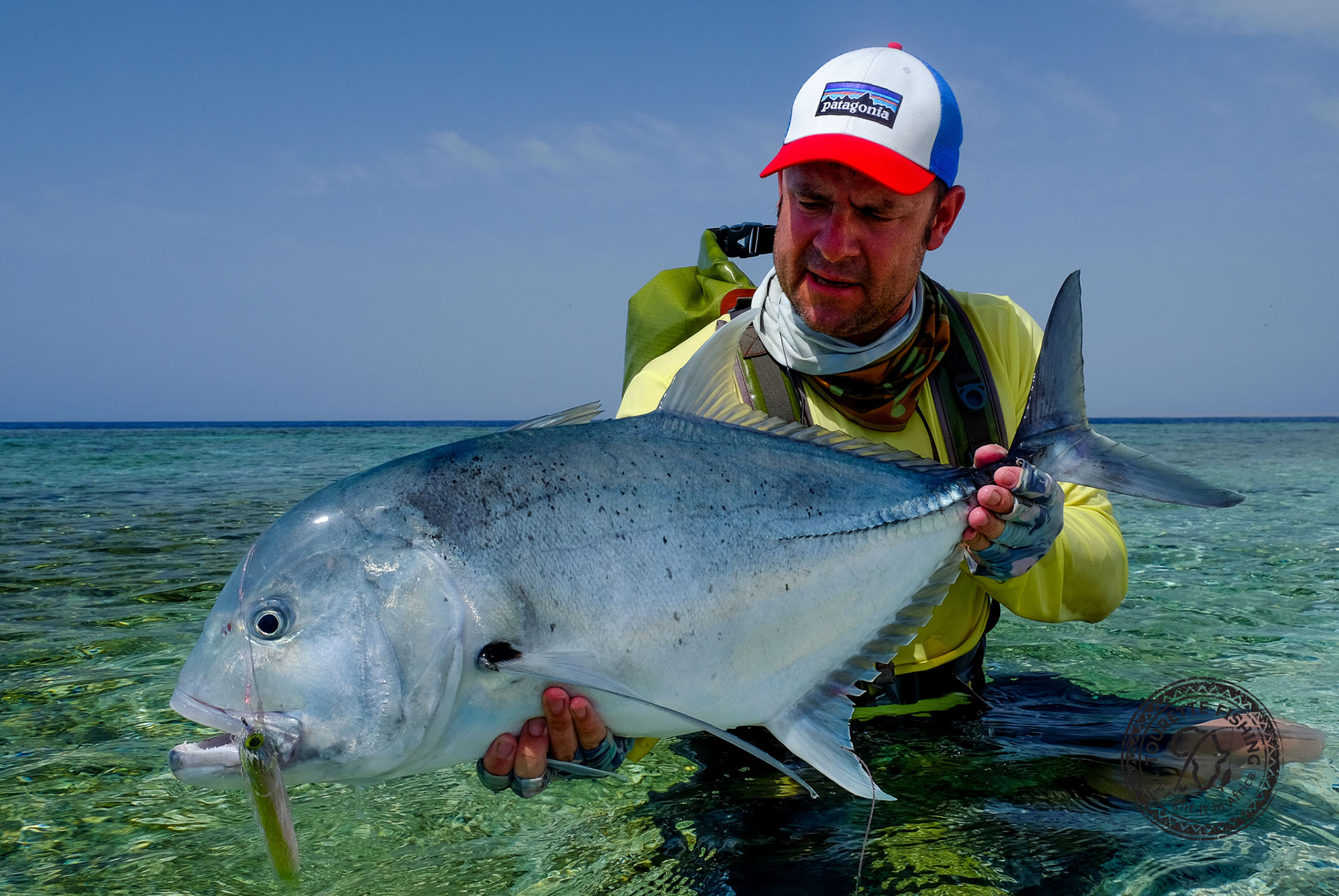 Giant Trevally on the Nubian Flats

So at lunch we had a 1 in 6 conversion rate, which we all agreed was perfectly acceptable given the terrain we were fishing on. After lunch we hit the flat we call Shambaia for some more civilized trigger-fishing. The wind proceeded to die down through the course of the morning and by mid afternoon the flat looked like one giant mirror. Needless to say, the guys had to get their ninja on as triggerfish in these conditions can be close to impossible. Mike la Sota stepped up to the plate however and almost immediately ended his Titan drought by landing one right out the gates. We also got some really good shots at milkfish shoaling on the flats, as well as some bonefish. No conversions but incredibly exciting close quarter stuff.

On Day 4 we woke to pan-flat glassy conditions and incredibly high temperatures. It was so hot that it felt the sun was within walking distance from us. With no wind and current, and given how educated triggerfish become in these still conditions, we decided to go try for some sailfish offshore where we’ve been seeing them hunt the last couple days. Sadly nothing came up on the birds and we ended the day off species hunting over the deep reef edges with 9wt’s and small flies for all sorts. This turned into a great deal of fun with the guys racking up about 10 species, from queen fish to peacock grouper. 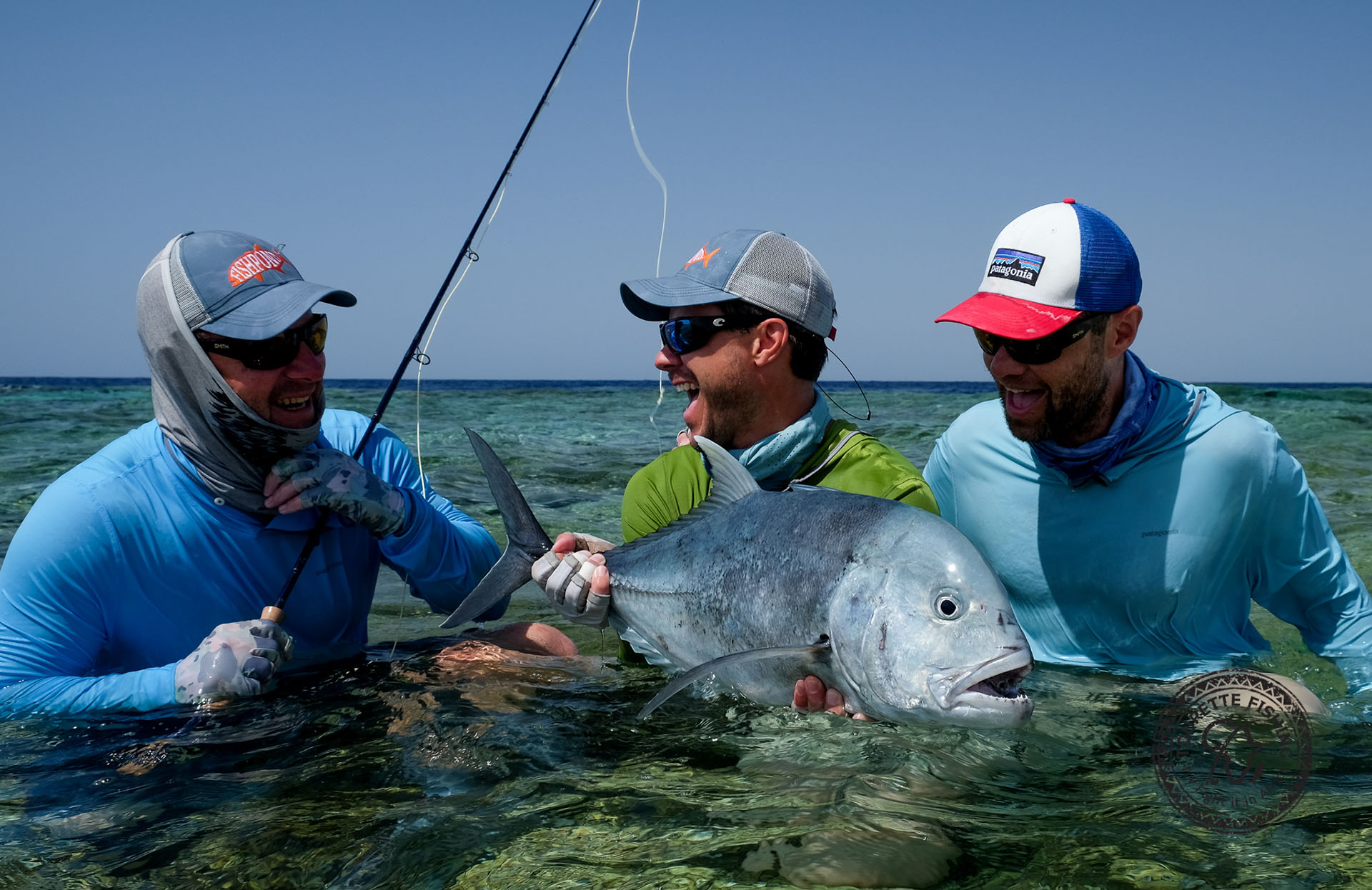 The team admiring their catch out on the pinnacles

The wind was playing ball on the second last day of the trip and blew just enough to keep us cool and not effect the guys casting. The current also picked up again and there was a fierce push from the south. It was a no brainer and soon after breakfast we made our way back out to the pinnacles. This proved to be an excellent choice as straight off the bat, Wade landed a very respectable Geet. The action died down immediately for some reason and we weren’t sure what was going on. Tease after tease nothing, but then on a tease, that went quite far out, a big dogtooth tuna came out of the deep blue in hot pursuit. It was so big it could dwarf a dolphin. This clearly created some FOMO(Fear Of Missing Out) under the surface and within a second, GT’s were coming from everywhere. There must have been 30+ fish coming at us like torpedo’s ready to crush everything in sight.

The guys were ready though and as the angry mob reached the edge, we fed them three sempers and yes, Tripple UP! De-ja-vu two days ago! With anglers all hooked up right on the edge of a 50m drop, plus one guide dancing around trying to keep everyone on their perches, the ocean decided that this was not enough entertainment and decided to put a huge oceanic white-tip shark into the mix.The hungry shark came right onto the flat and ended up almost on-top of Rus, who in the process lost his footing and was flat on his back, while still connected to his GT. Then to make matters even more exciting, 2 big reef sharks crashed the party as well and quickly turned this cluster into something that needed some really quick, careful decision making. Matt quickly snatched his fish by the leader, and pulled the fly. Then proceeded to help Wade keep his footing on this gnarly mix of sharp uneven coral and deep holes, before loosing his fish to reef. Meanwhile Rus managed to get his fish over the edge about two minutes later, which then surged again into the deep once more before cutting his line on the coral edge.

We were completely man handled by absolutely everything but will go down as the most exhilarating few minutes of our lives. After some tremendous laughter and head shaking, we composed ourselves again and carried on fishing. Straight away Rus hooked something massive again, but this time round it was fighting more like a big dead weight than a trevally. He would gain some line and then the fish would just go stationary on the wall again for a while before moving a couple meters. After a quick inspection with some diving goggles, we realised he was hooked into a massive malabar grouper that was perched on the reef and had zero plans of coming up to the surface. In the end, this giant won the battle and snapped Russ’s leader on the coral. A very eventful morning!

After a quick lunch and sail over the middle of the day, the team set out to tackle the Snake Islands before sunset. 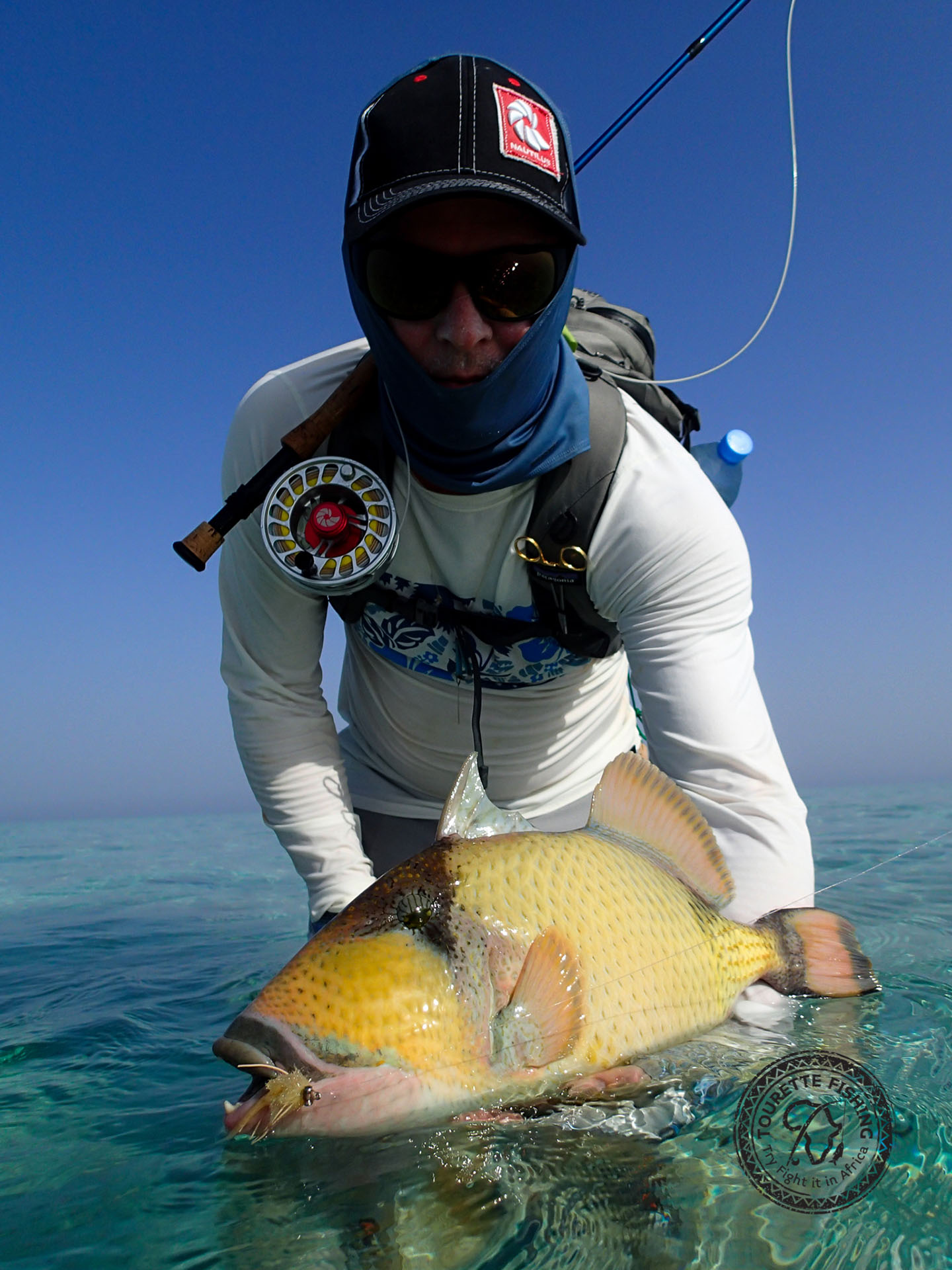 Little Snake Island had some very obliging triggerfish and Josh landed a very nice yellow margin triggerfish. The guys on Big Snake Island came across a big geet while still making their way to the island. They quickly intercepted the fish, but the fish missed the fly and spooked after seeing to the tender boat.

The final day of the trip we got greeted by big wind and rough seas. We fished the northern section of Magarsam Island but by midday the wind started pushing close to 35knots and made conditions unplayable. We called it a day and headed back to the mothership to celebrate an extremely eventful but fun week. 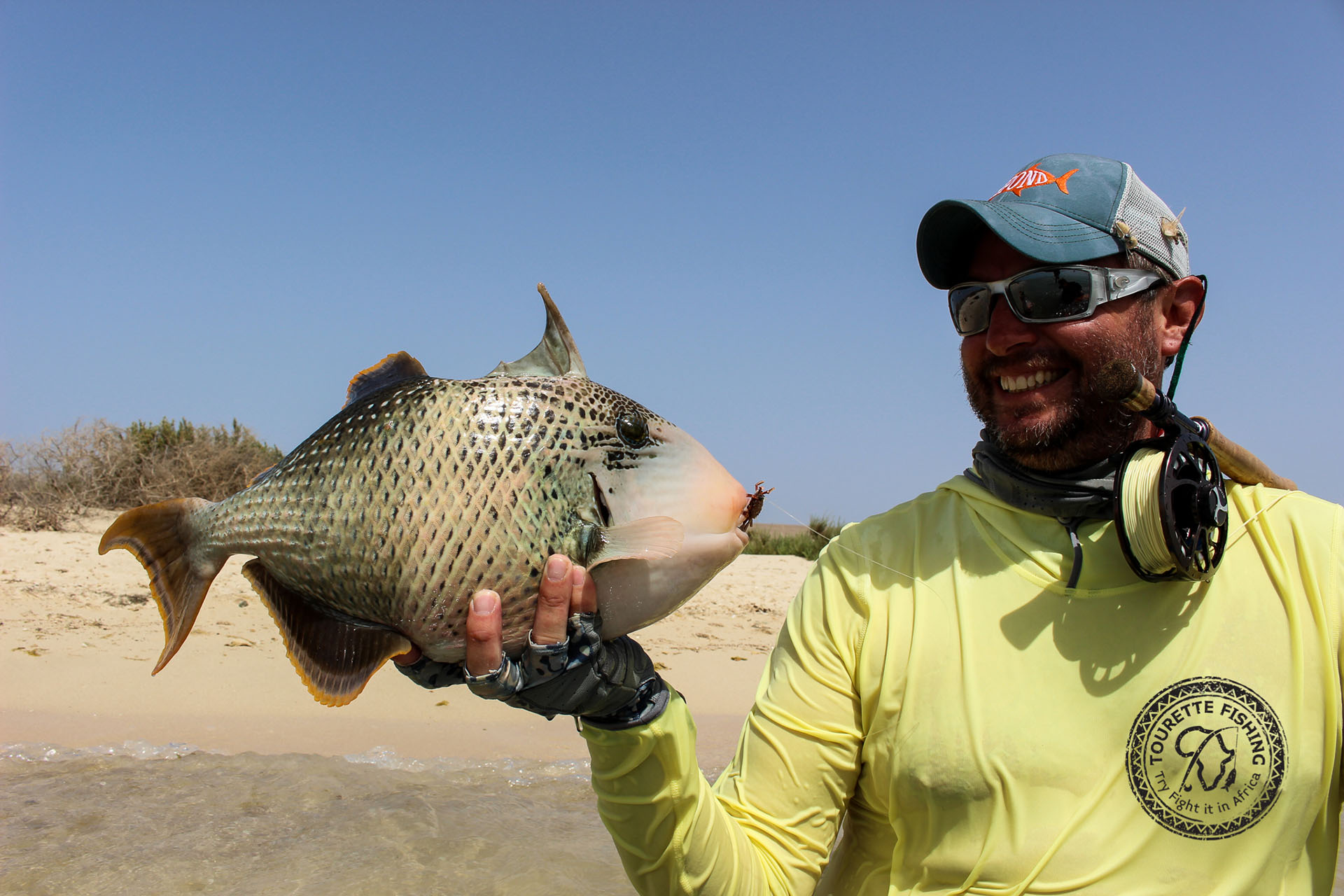