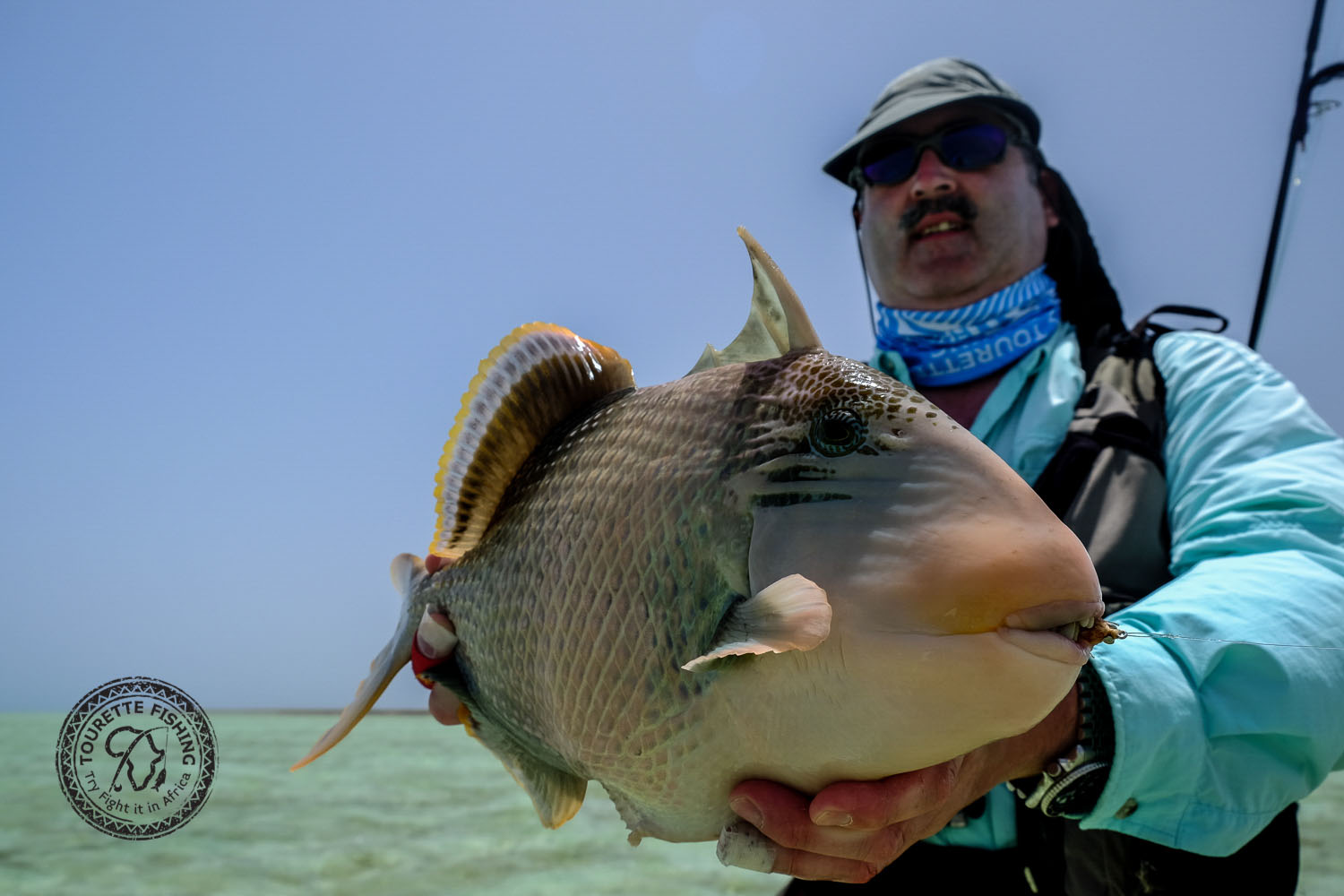 For the first week of the 2016 Nubian Flats season, we were blessed to be joined by a number of great characters of every corner of the planet. We were joined by Bruce from Scotland, Tom from the USA, and Johan from RSA. An interesting mix of cultures but all three of them had one thing in mind, fish!

Early on the morning of Day 1, the mothership steamed out of the harbour and set course for the first anchorage just south of Snake Island. The plan for the day was to fish the western side of the big Island for the day, looking for triggerfish and trevally. The morning started off well and not long into the walk Tom had a good shot at a permit with-in the 20lbs range. The fish showed good interest and followed the fly but then in true permit fashion, it decided that this was not the day, before spooking off into the distance.

Tom got given a second chance and soon after he was presenting his fly to another smaller permit. Again the fish showed plenty interest, but this time round Tom’s fly got snagged on the bottom. Needles to say, the fish lost interest and went in search of food elsewhere. By midday some clouds(very unusual for this time of the year) rolled in over the area and made sight-fishing a nightmare. With the low visibility, we changed tactics and ended off the day with some teasing along the outside reef of Snake Island. The lads landed some really nice bluefin trevally and ended the day in the high spirits. 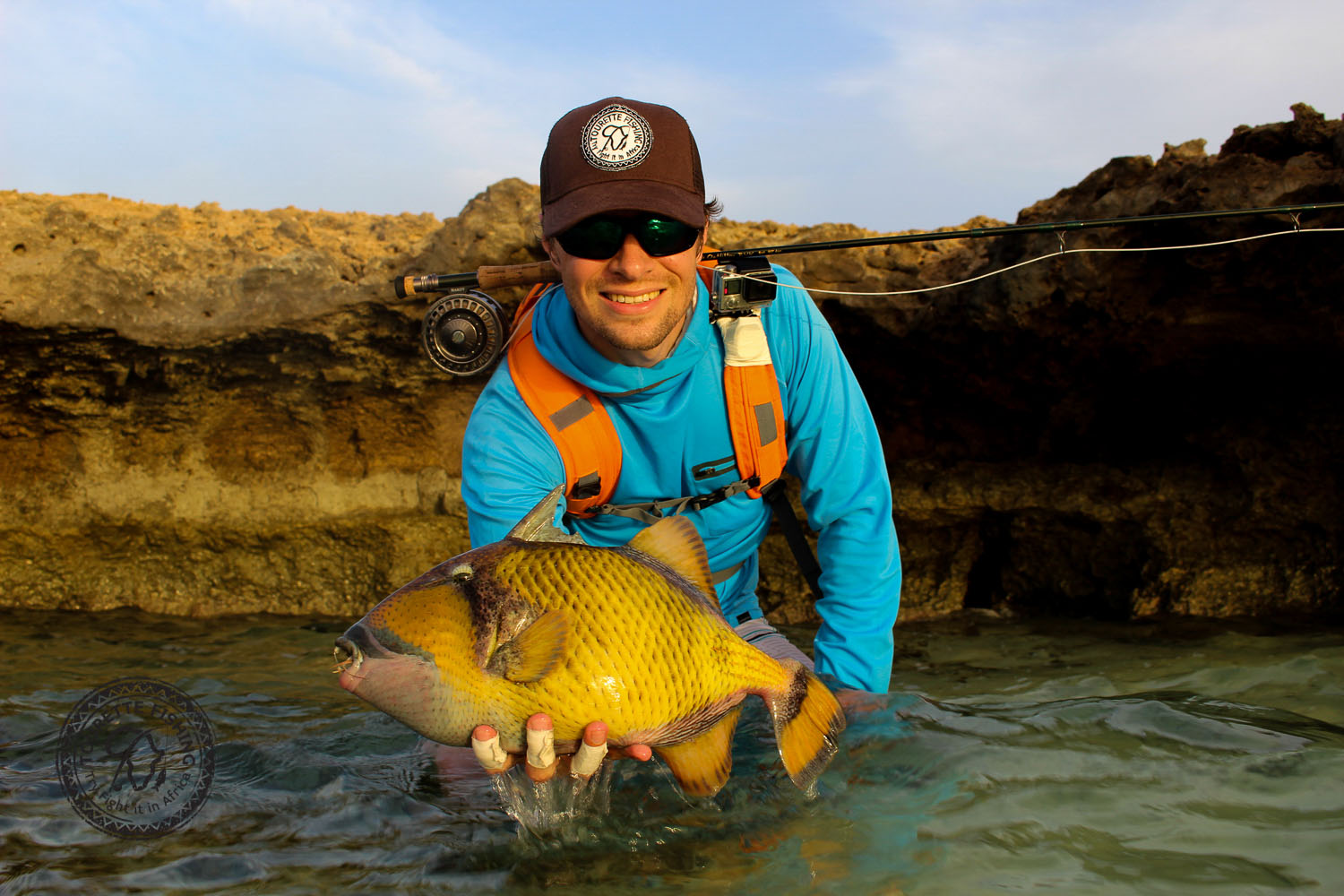 On Day 2 the clouds disappeared and the guys got treated to some good fishing. Landing some good titan and yellow margin triggers on the flat, as well as some big bohar on the tease and one big GT lost.

On the morning of Day 3 we moved the mothership to the next anchorage to the north of Snake Island, where we planned to fish the last couple days of the trip before making our way back to Magarsam for the final day.

The massive sand flat that we call Shambaia had a good variety of species which included milkfish, some triggerfish, and trevally (both giant and bluefin), but the glassy conditions were just to calm and we landed very few fish. Most would think that glassy conditions are perfect, but try drop a fly in front of a weary fish without disturbing the water and making a noise. Almost impossible. Outside on the pinnacles however, the fish were on the feed and we tried to capitalize on this. The flats on these pinnacles had some really big GT’s on them and we got handled by some brute’s! Tom hooked into a monster that somehow unhooked itself, and straight after Johan got cut off by a meter-plus sized fish that was unstoppable and swam him right off the flat and over the edge. On the tease it was even worse. Countless big GT’s were exploding like grenades behind the tease, and tearing through leaders like there was no tomorrow. Like fellow Italian Guide Federico would say, it was a “massacre satanico”. These pinnacles hold some spectacular fish but on this terrain it is almost impossible to land fish. Extremely sharp coral with crazy drop off’s is enough to even shred the best of tackle.

The lads kept the scoreboards ticking over and managed to land some small bluefin but the GT’s were clearly leading the scoreboard. GT’s Hero – Flyfisherman Zero 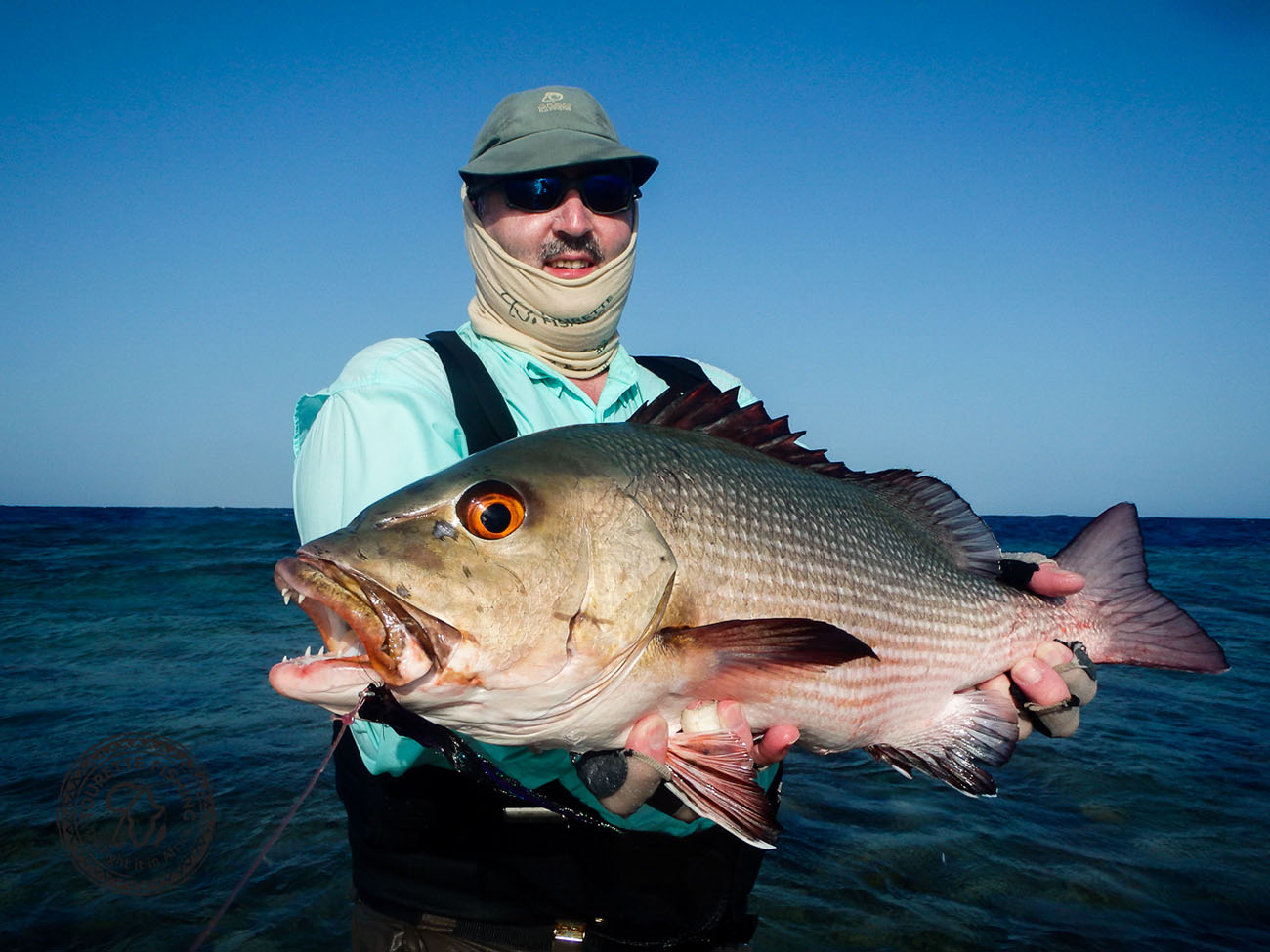 Bohar snapper, the dog of the Nubian Reef 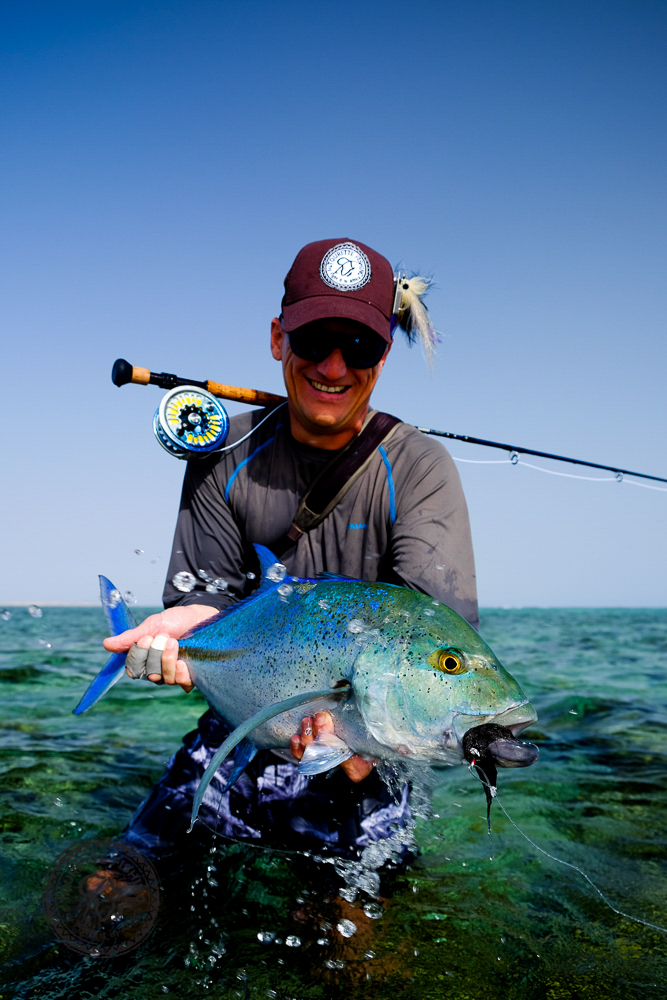 On the final day we were back on the northern side of the big Island and things were looking up. Bruce opened up the scoreboard by landing a very nice yellow margin triggerfish . Tom followed up soon by hooking into another nice yellow margin but this fish managed to chew through his light tippet before he could get it to the net. Next up Bruce, who was clearly on a good day, landed another beautiful yellow margin triggerfish. If the previous couple day’s hiding by the GT’s weren’t enough, we came across a good 90cm fish in super skinny water, hunting with his back sticking out of the water. Tom quickly got his 12wt ready but it was not to be. He placed the fly right in front of the geet, but got denied. Another victory for the trevally. But thats fishing

It was a week of many highs and certainly a few lessons in what it takes to land fish in these conditions, but it was a week that was thoroughly enjoyed by all the guests and guides. 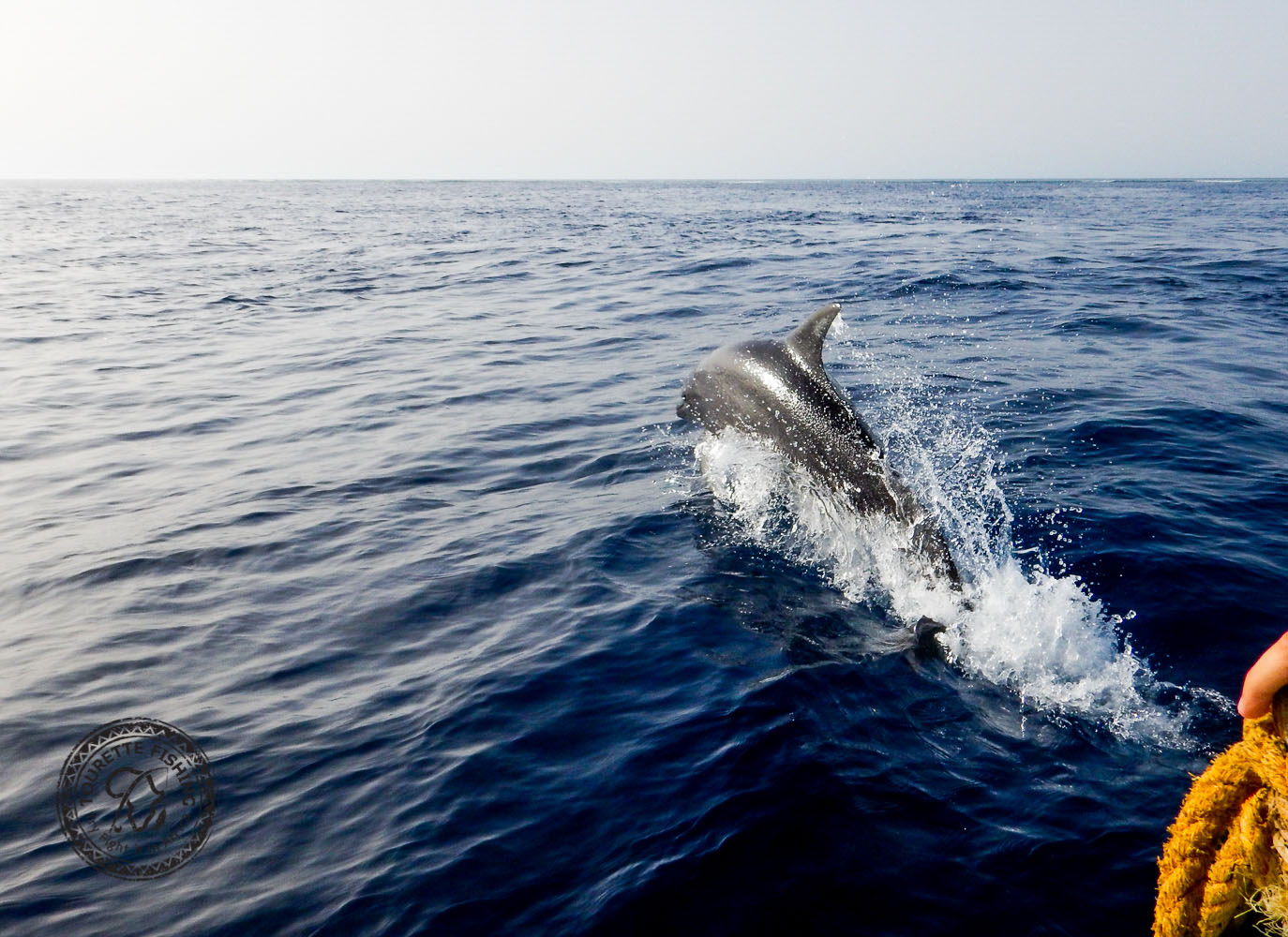 A common sight in Sudan, dolphins surfing infront of the skiff 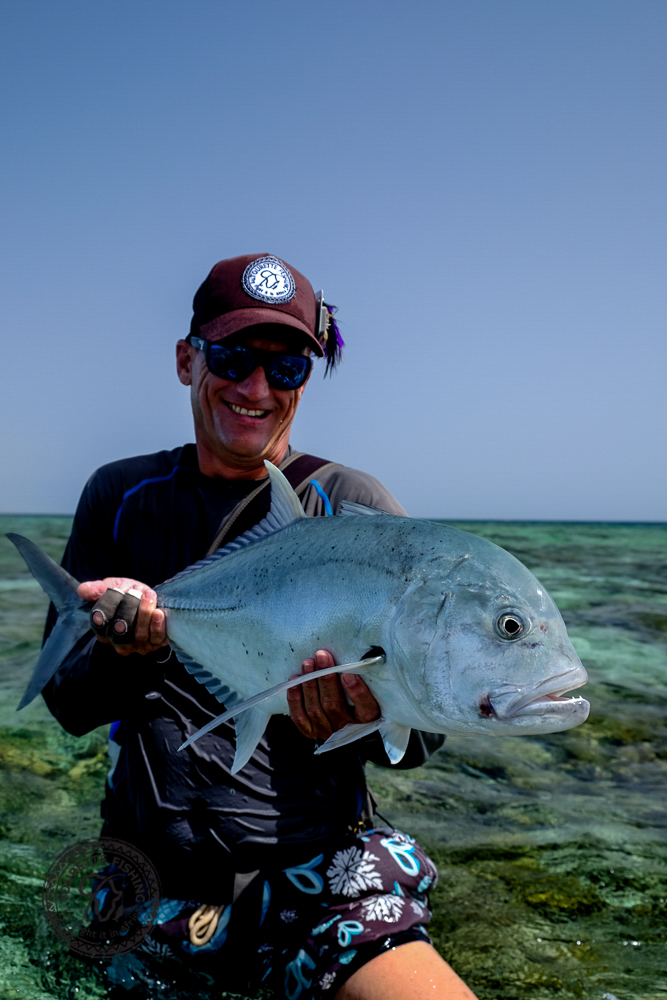