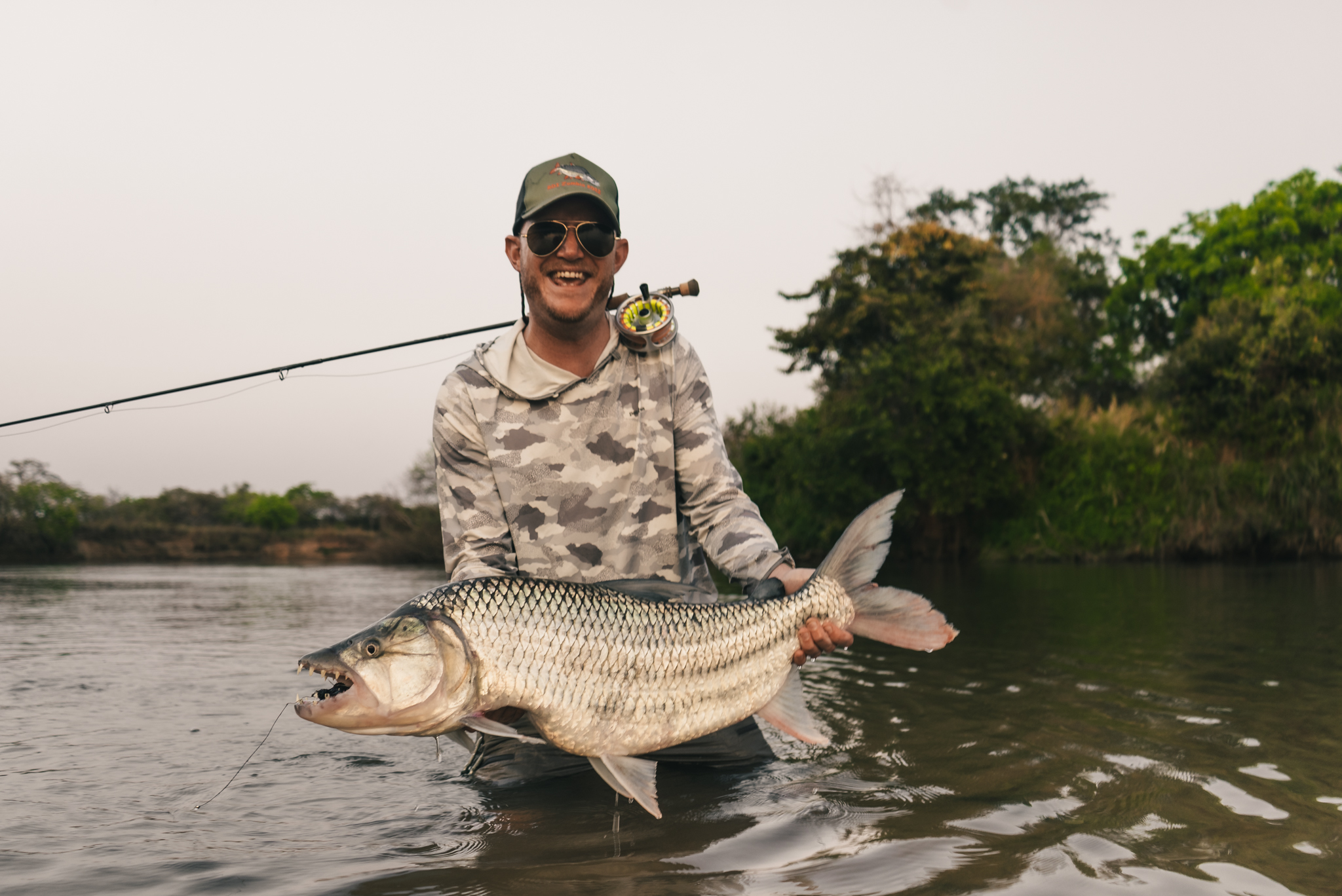 Week 6 welcomed anglers from around the world, namely South Africa, Zimbabwe, England and the USA. We couldn’t’t have hoped for more excited and diverse bunch of guys.

Summer is officially here as the river comes alive! From the insects, to the bird life, the bank-side wildlife. Plus all the various fish species that these two river systems are home to. One things for sure, the water consumption has somewhat doubled in comparison to the first half of the season, amongst other beverages 😉 It is getting warm ekse!  Smiles all round though. Time to dig into the tigerfishing.

Surface flies and backing making a regular appearance on the Ruhudji

Once more the guys were out the gates at a rapid rate. The first day commenced on the middle beat on the Ruhudji. One boat starting above camp and the second boat starting below camp and then swapping beats after lunch. The aim for the day was to dig into the deep outside banks with sink tips. Then target the timber and other bank-side structure on the drift with both floating and intermediate lines.

The morning started off slow with very few fish showing signs of aggression, the volatile upstream breeze certainly wasn’t making anything easier. However, the day threw us a bone, the skies opened up as the wind subsided with one hour left of the morning session. Suddenly the fish turned on as a late flurry of juvenile tigerfish reached the net. The guys had a serious itch to scratch come lunch hour. The afternoon certainly didn’t disappoint……

Anchored up in a roaring shoot in the first bend below camp was the setting. The boat was squared up with a tight pinch as the guys were getting flies deep into a large deep and fast shoot. With Bruce and Neil carrying their form from the morning session, we were anticipating some fireworks! Bruce was dialled in within a handful of casts with line sunk deep along the edge of an ominous seam. Second strip and Bruce went tight, extremely tight as the fly line tore through the seam. Bruce made sure and set the hook in spectacular fashion. The fish was going nowhere but the net for Bruce. It wasn’t long before Bruce was nestled up on a signature Ruhudji sandbank grasping a 16lb beauty.  A superb fish for the first afternoon of day one.

Meanwhile on the other boat things were heating up as well

Whilst the ‘’geriatrics’ continued on boat one with Tim, the second boat upstream were having a blast of their own. Greg set up both Chris and Ed for an exceptional late afternoon session, fishing Harley Shakes into red hot timber. The guys were moving fish at a rate of knots. A highlight of this sessions was when Chris managed to finely stitch his fly behind a sunken tree, and it was immediately met by the aggression of hunger ridden tigerfish. The fish headed for the hills revealing the bright blue backing in true tigerfishing fashion. Chris applied the brakes and brought the fish home, a lovely 12lb fish to round off day one.

As the week continued, the guys managed to pick up where they left off, Neil came to the party in a big way jumping a fish in the 20lb range the flowing morning. A fish of exceptional proportions and one that won’t be forgotten for quite some time. Sadly the fish threw the hook in true tigerfishing fashion. Neil, only fuelled by the encounter, dug deep and produced a stunning 13lb tigerfish to finish off his morning session.

His boat partner, Chris, now chomping at the bit, came right in a big way shortly after Neil’s Stella performance. Chris swung a neatly tied baitfish pattern right into a likely undercut cut when he was met by brute force. An immense fish, of 15lbs, was a suitable note to wrap up a great day on the upper Ruhudji. Bruce and Ed pulled off a couple last minute moments of magic landing a pair of double figure fish amongst various other juvenile tigerfish. It truly was a great day.

It was all to play for as their final day on the Ruhudji commenced. Bruce, as always, got off to a flyer. A stunning 14lb tigerfish just half an hour after his morning coffee. Things were on. Chris didn’t let Bruce out of range for too long before he managed a brute of a 16lb tigerfish on the floating line, a stellar effort as he plucked the fish out of an immense timber jam. What a way to finish off their Ruhudji stint.

Losing a monster on the Ruhudji, classic tigerfishing!

After swap over (when guests swap between Dhala and Samaki Camps each week), the second half of the Ruhudji leg started on the same note with Tom expertly coaxing a 15lb fish to the net on day one. Kyle fought a noble fight after a couple bitterly sad moments of big fish shaking the hooks. Kyle managed to subdue an impressive amount of tigerfish for his stint on the Ruhudji ending the final day with a stunning double digit tigerfish. Pete also placed his best foot forward landing a series of spectacular double digit tigerfish. What more could one ask for! However, Tom had one last joker to play before the end of his stay.

Quite literally, on his final cast of the week, Tom went tight on something truly special. This aggressive fish pounced all over a top water fly fished just subsurface on an intermediate line. This fish ripped into the backing before all onboard could blink. It then turned, and immediately went airborne, a true giant. The fish broke the surface in attempts to shake the hook, only the head and the fishes rattling gills saw the light of day, – the telltale sign of an oversized tigerfish. The fish made one more impressive surge and managed to throw the hook – no surprise when tigerfishing in Tanzania. Heartbreak for all. Thankfully for Tom, he had already pulled off the fish of a lifetime during his first half of the week on the Mnyera River. More on this to come….

The gents that set off on the Mnyera had a cracking start, 10 minutes into the drift down from camp in a deep fast flowing clay cut corner Kyle who had never caught a tiger at the point was sinking his fly and stripping it out of the gutter on the swing when it went tight. After a dogged fight from a well behaved tiger, who didn’t jump too much, he managed to land a 14lb tiger, not a bad way to open his account. From there on the week was consistent- producing many double digit fish ranging from 10-16lbs.

It was an afternoon session on the middle beat when something special happened. Tom and Pete were fishing floating lines against the timber, it was getting late and almost time to call it a day. We decided to fish the last 50m of the bank we were currently working. Pete put in a cast right up next to a submerged tree and instantly went on with a good fish that exploded on the surface fly. We knew from the onset that it was a solid fish. The fish jumped a few times and pulled a bit of string, before being  safely guiding into the net, a great 16lb tiger and a new PB for Pete. After a few photos the fish swam off strongly.

Everyone was fired up to see if that fish had some friends with it, so we repositioned next to the timber and this time Tom threw a cast in. One strip and the water erupted, this one was definitely a bigger fish, and it  took off downstream at a blistering pace (line burns to prove it), running deep into the backing. The giant fish jumped a few times in the middle of the river then decided she wanted to go back into the sticks.  Tom had to do everything he could to stop that from happening.

The suspense was unbearable

We held our breath as we watched it jump centimeters from the structure. Then for some reason this fish turned and came out into the deep sand section of the river.  After a nerve racking fight the fish found its way into the net. It was a huge 22lb tiger. A magical moment for all on the boat to be part of, and a more fitting way to end the day could not have been scripted.

Overall, both the Mnyera and Ruhudji delivered some exceptionally tigerfishing this week. As the guides team, we had a thoroughly enjoyable time this week spending quality time with regular and new guests a like. We look forward to building more friendships in this special place as we welcome our next group to camp this Saturday – if you would like to come on safari in Tanzania with us, get in touch!

Cheers from Dhala and Samaki Camps 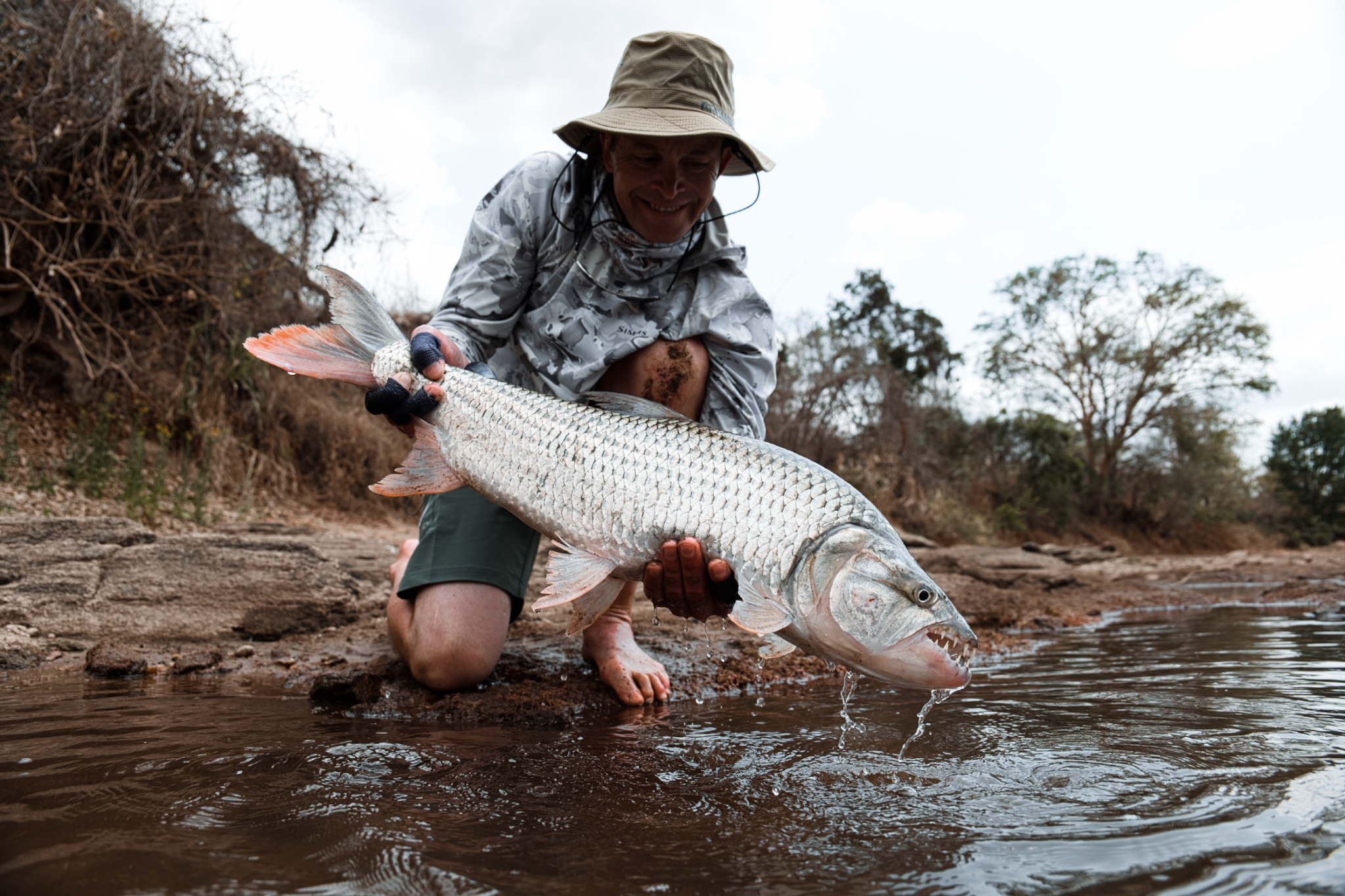 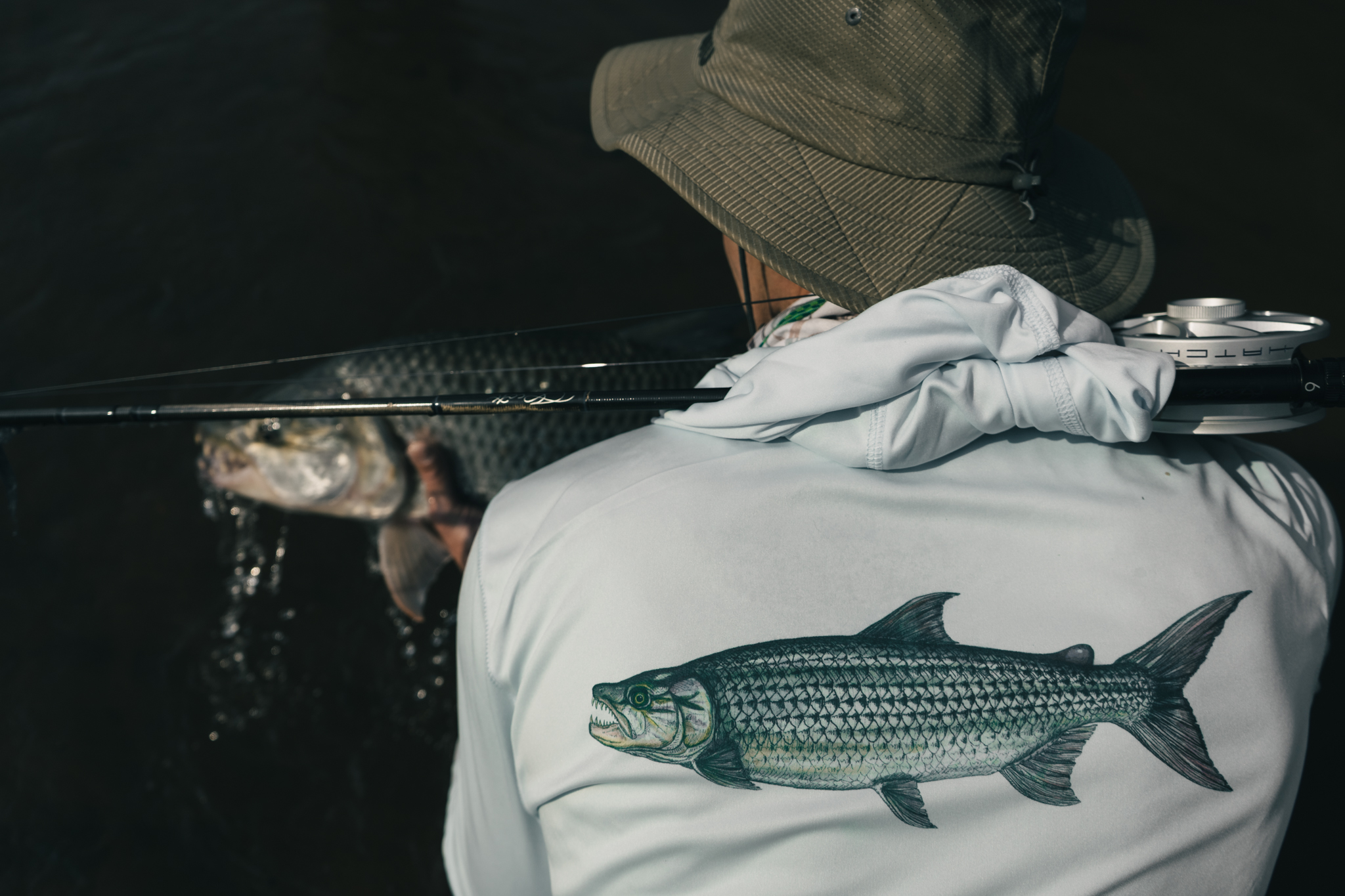 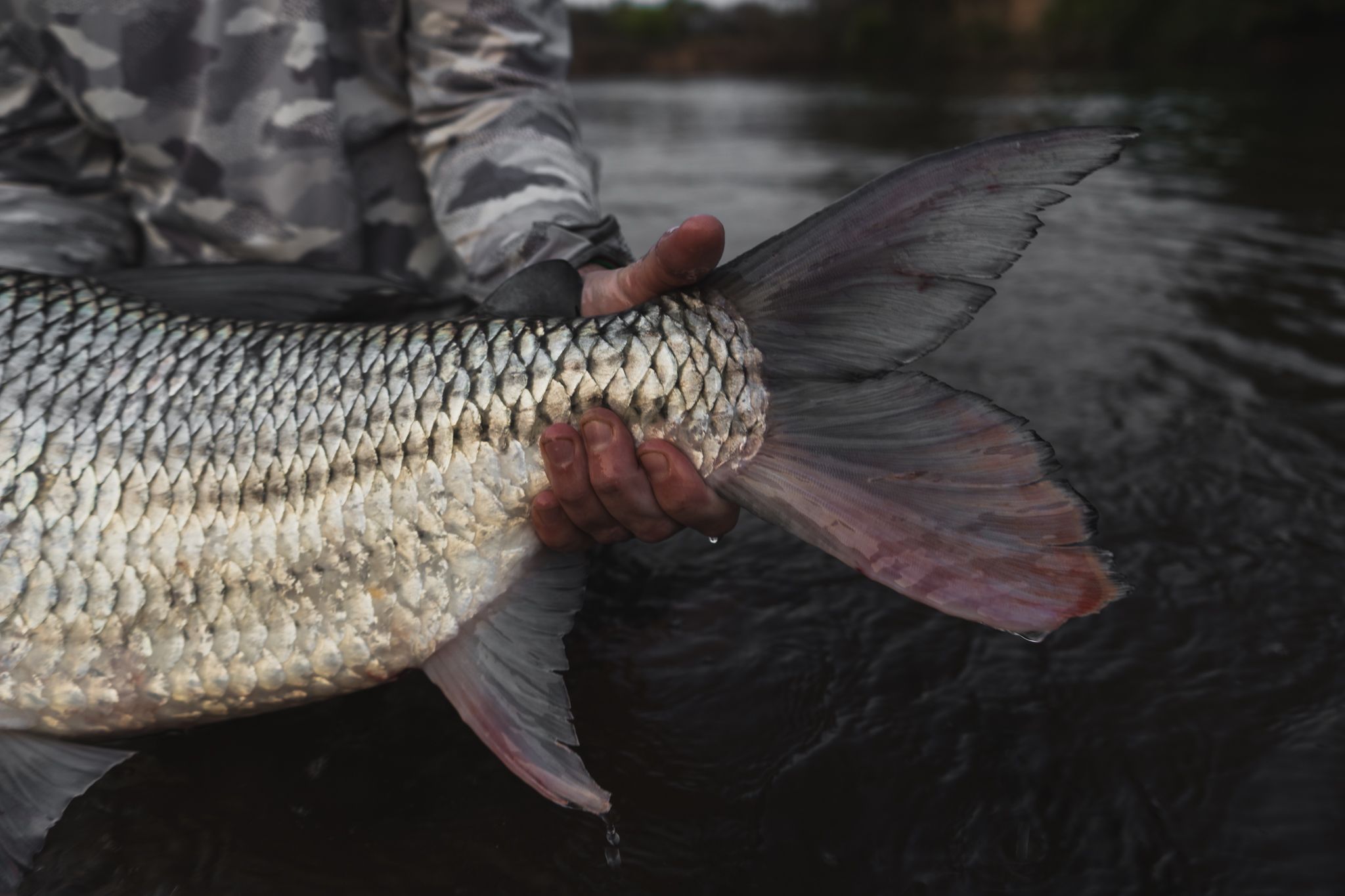 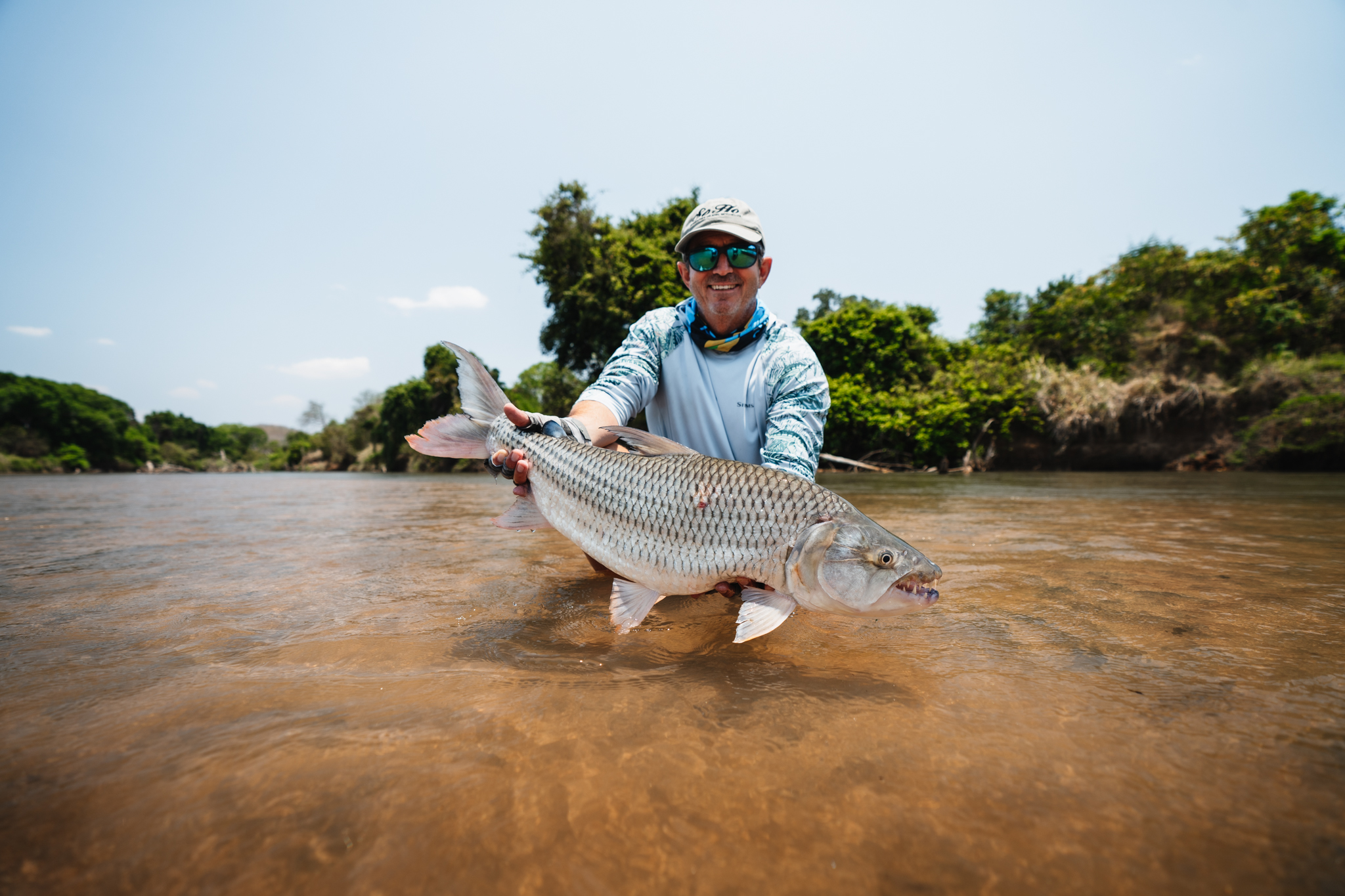