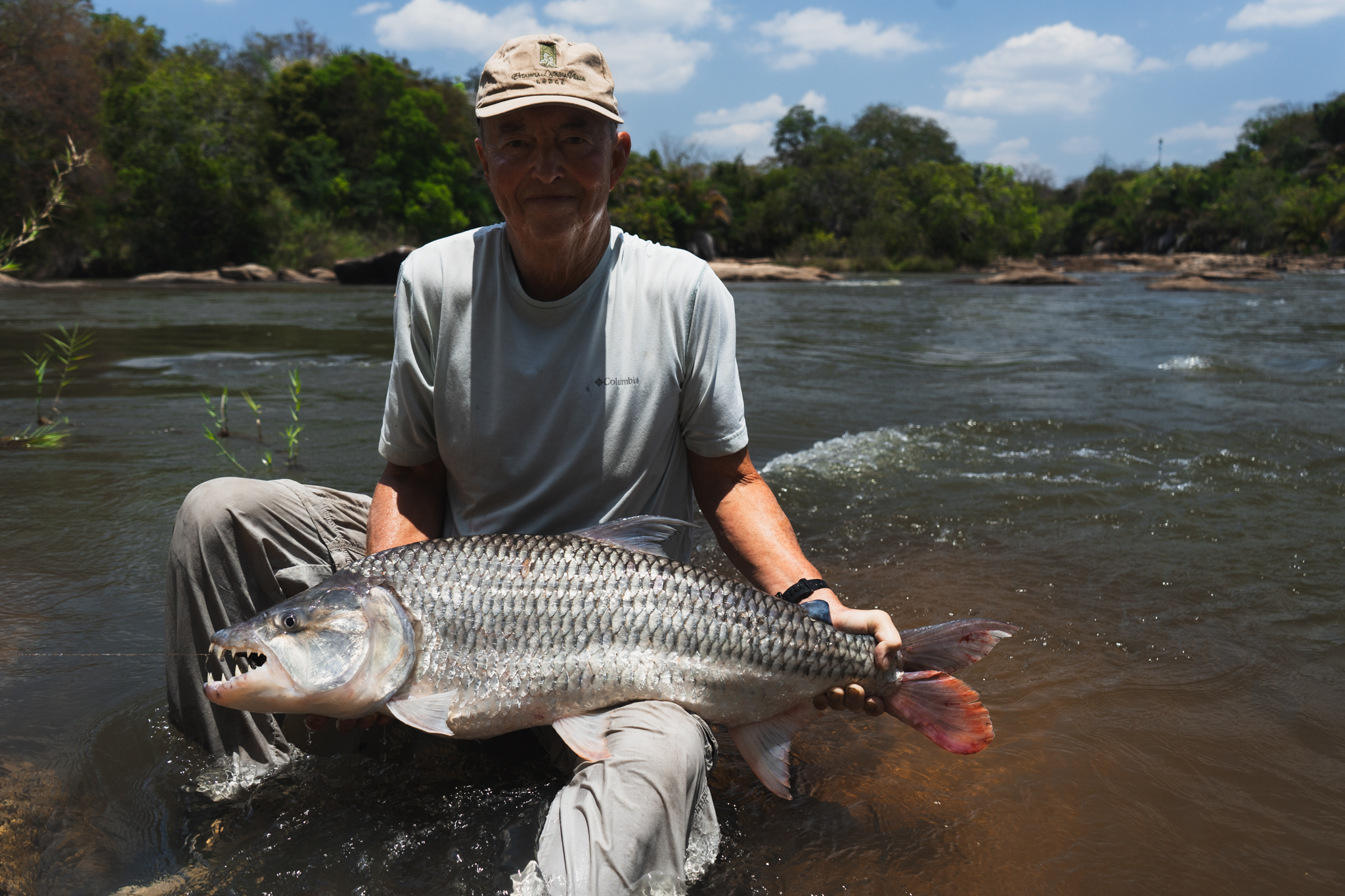 The first day of week 3 started superbly well, three hefty double-digit tigerfish met the net before lunch on Tim’s boat. No time to shake off the rust. The guys were off to a flyer. What happened to the slower mornings? The following day sang a different tune; the fishing was tricky across both rivers.  Fish were holding very tight to structure and could only be tempted to a reaction bite by fishing flies ultra-tight to their lies in the structure – timber and deep outside bends. This resulted in a lot of swirls and boils on the fly, as the fish snapped at the flies in irritation as opposed to full on attack.  The tigers were not happy and were being finicky.  It is what they do. The following day was the opposite. The bite was back on, and the guests on both rivers were treated to some magical tigerfishing with many double digit fish coming to the net. The next 10 days preceded in much the same vein, periods of intense action, followed by lulls. All very pleasing to witness – tigerfish behaving exactly as they are meant to.

Staying focused during the quiet periods is part of the mental game and the key to converting the tigerfish bites that take you by surprise. Here, the African Waters guides team work extra hard to ensure our guests remain in the zone, and fish smarter, rather than harder in these tough times.  When the tigerfish are out feeding aggressively, we shift our focus to keeping anglers calm during the frantic bites. It takes a cool head to react and fish effectively when the big fish are out feeding. The energy levels on the boat are tangible, adrenalin levels skyrocket, and it is during these periods where the gentle guidance of a seasoned pro can make the difference between landing the fish of a lifetime, or watching it disappear in a heartbeat. But even when we all do everything right, tigerfish don’t follow the same script….

Heartbreak on a monster

On this session, Fred from South Africa, managed to guide his fly neatly underneath a patch of dense vegetation.  On the retrieve it was met with brute force and a shuddering boil as this monster fish tore out of the structure and into open water. One jump, two jumps. We had him! The line suddenly went slack as our reward slipped away. A snapped hook was the culprit. Heartbreak. That’s tiger fishing. Although this behemoth of fish did not make it to hand, Fred managed several impressive double figure fish in his week, with the biggest stretching the scales to an impressive 18lb.

With perfect weather, hot and very little wind, we headed up to the top beat on the Mnyera river, Things were looking positive as the fish had been active and conditions were excellent. Disembarking at Kasingo, we walked the upper beat, fishing all the prime spots meticulously. Strangely, the fishing proved to be somewhat tricky, all the productive lies seemed to be quiet as the morning progressed. The guys stopped for picnic lunch in the riverine forest with only a few bumps and little else show for their efforts.

It was after lunch however, when something truly extraordinary unfolded. Oli and Mark headed down from lunch into the top of a notorious pool, double-up. Mark nestled his cast into a likely lie under a pronounced bubble line. The line went tight on the first strip as all hell genuinely broke loose. The fish tore off unannounced without any glimpses of its size; the guys knew this was different. After peeling off 15meters of fly line and a further fifty meters of backing against a stiff drag, the fish made its first appearance. Violent head shakes and extreme acrobatics a long way down the pool. The guys were witnessing something truly incredible. After many a tense moment, Oli slid the net under this fin perfect trophy – a fish of many lifetimes, an unbelievable 27lb tigerfish; totally otherworldly. The size of this fishes caudal and its length were staggering.

After the dust had settled, Greg decided to jump in on the act and discover what a 20lb tigerfish was all about. The following day saw Greg from France step up and connect to yet another incredible fish, also on foot. After many tense moments, Greg managed to subdue a 20lb Mnyera tigerfish, what a way to sign off on an outstanding week! Apart from these incredible fish, many other double figure fish were landed by our visiting anglers from the UK, US, South Africa, and France. We truly cannot wait for what lies ahead for the rest of the season – get in touch here if you would like to join us for a fishing experience of a lifetime! 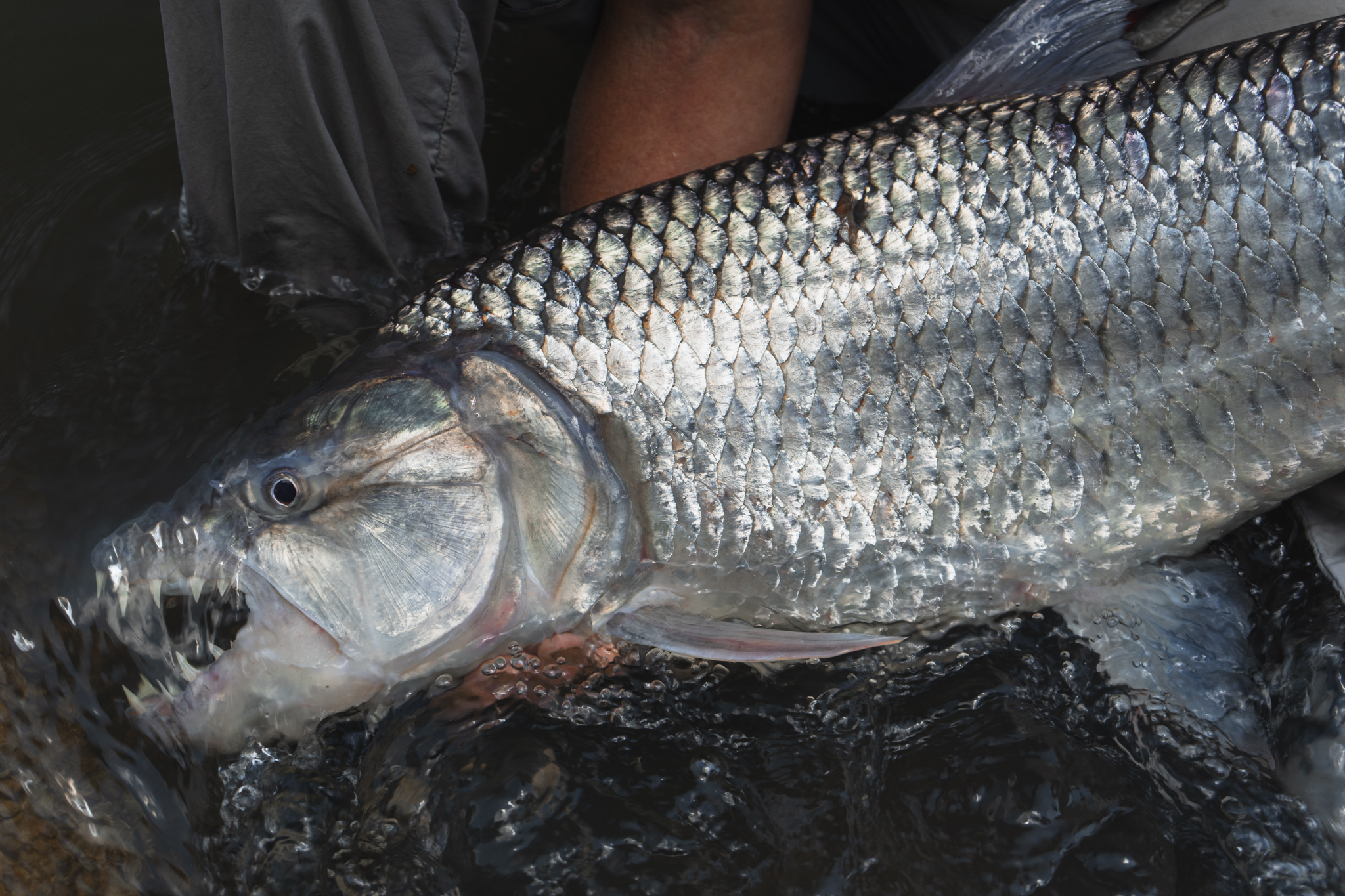 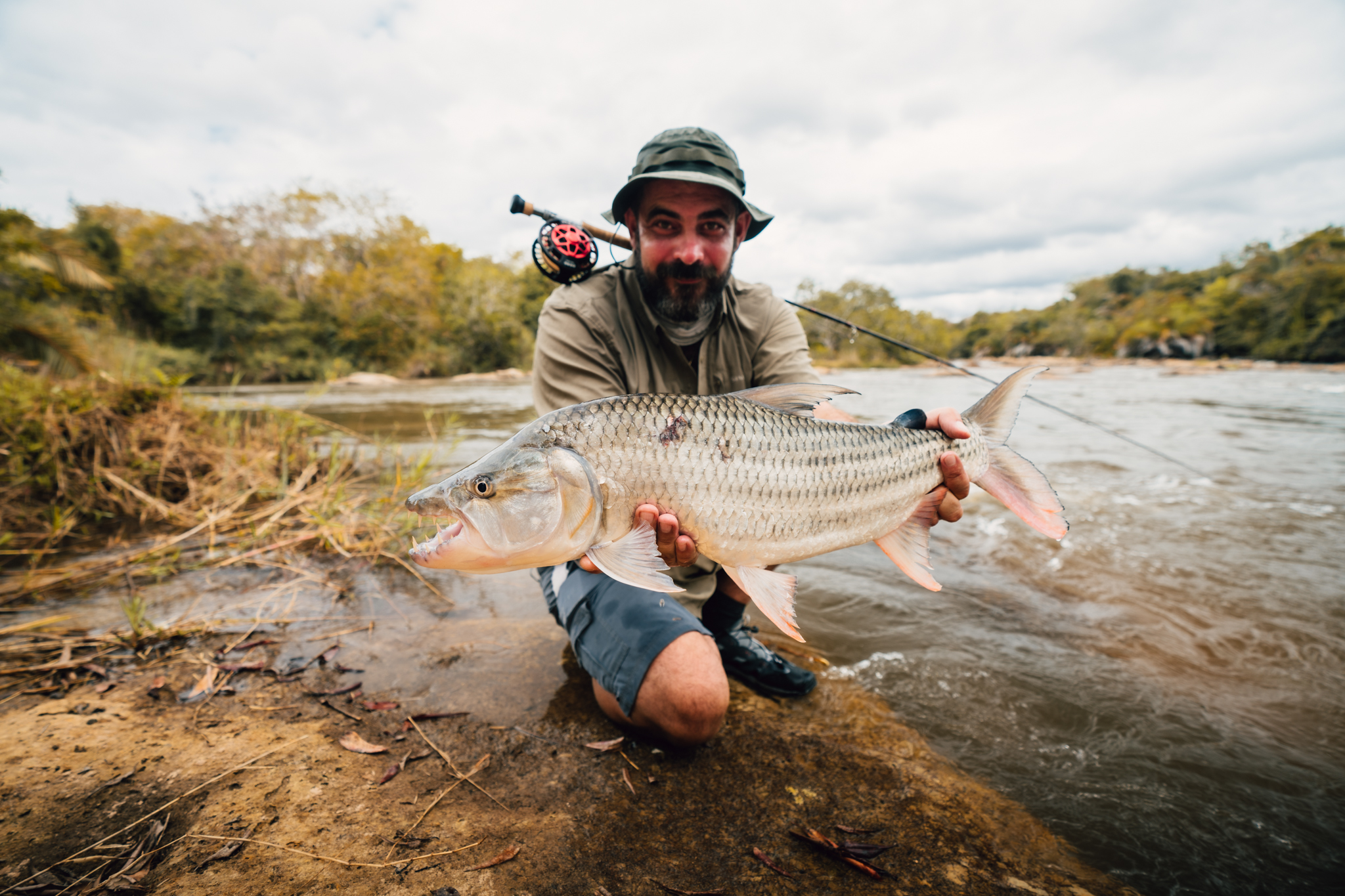 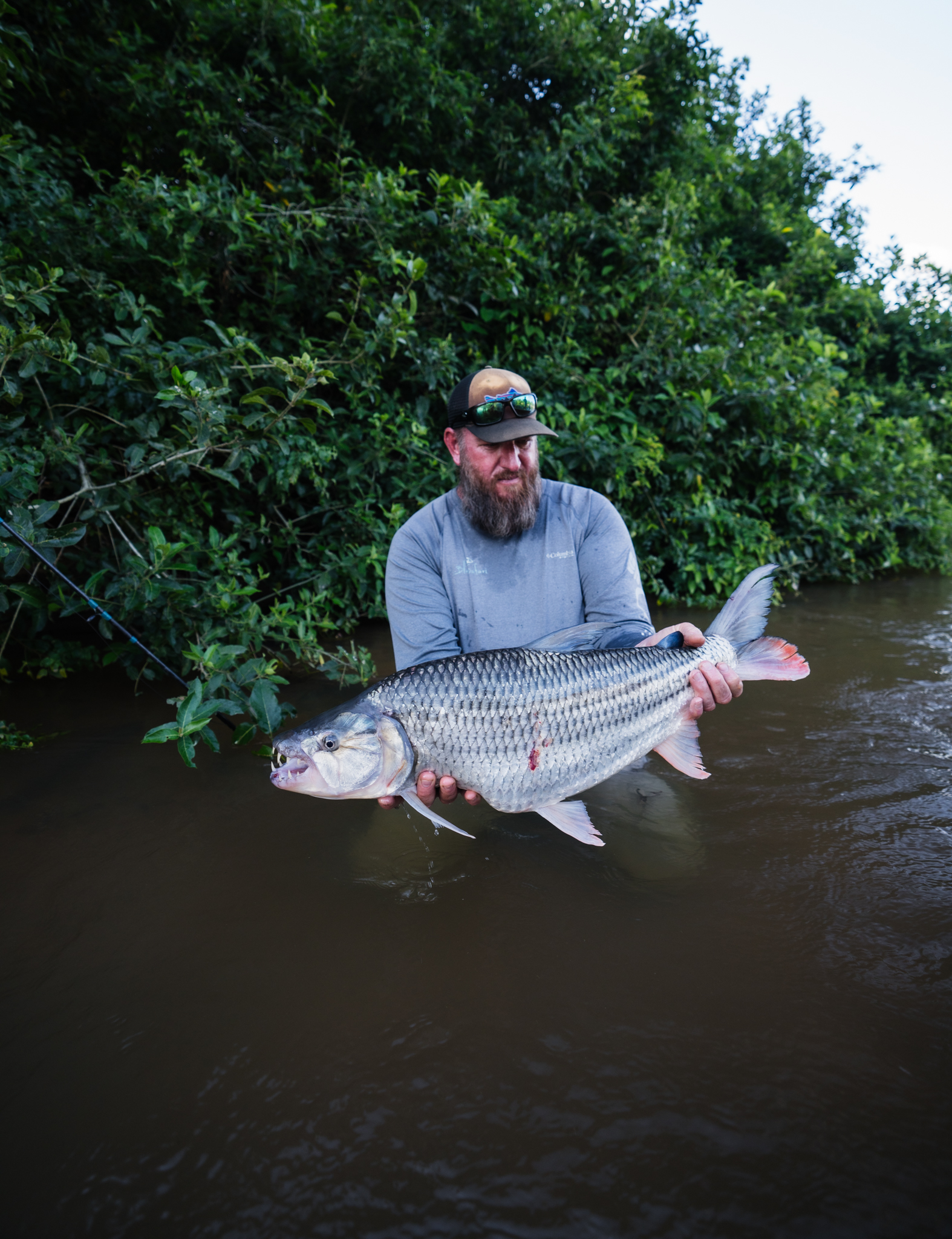 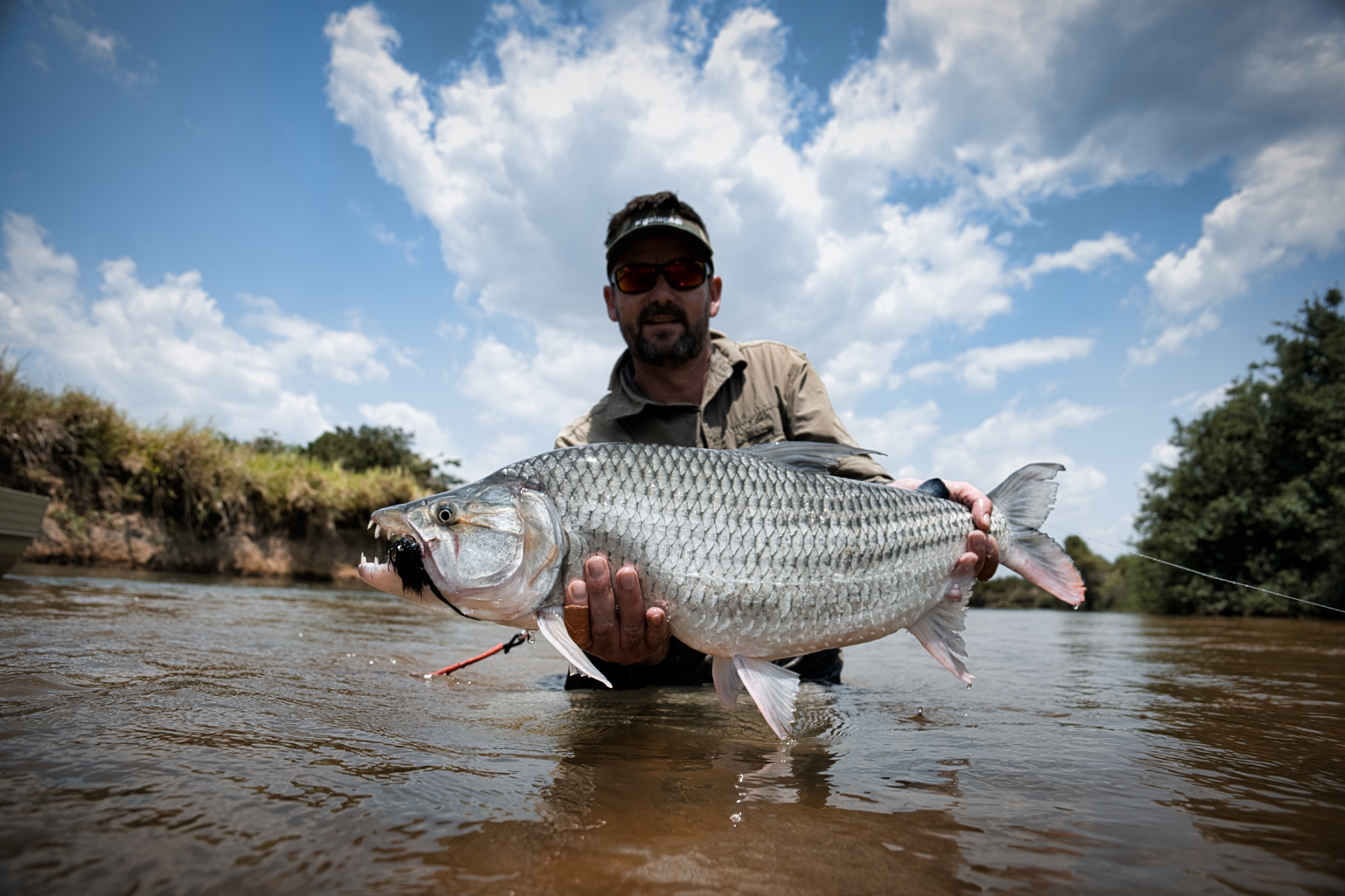 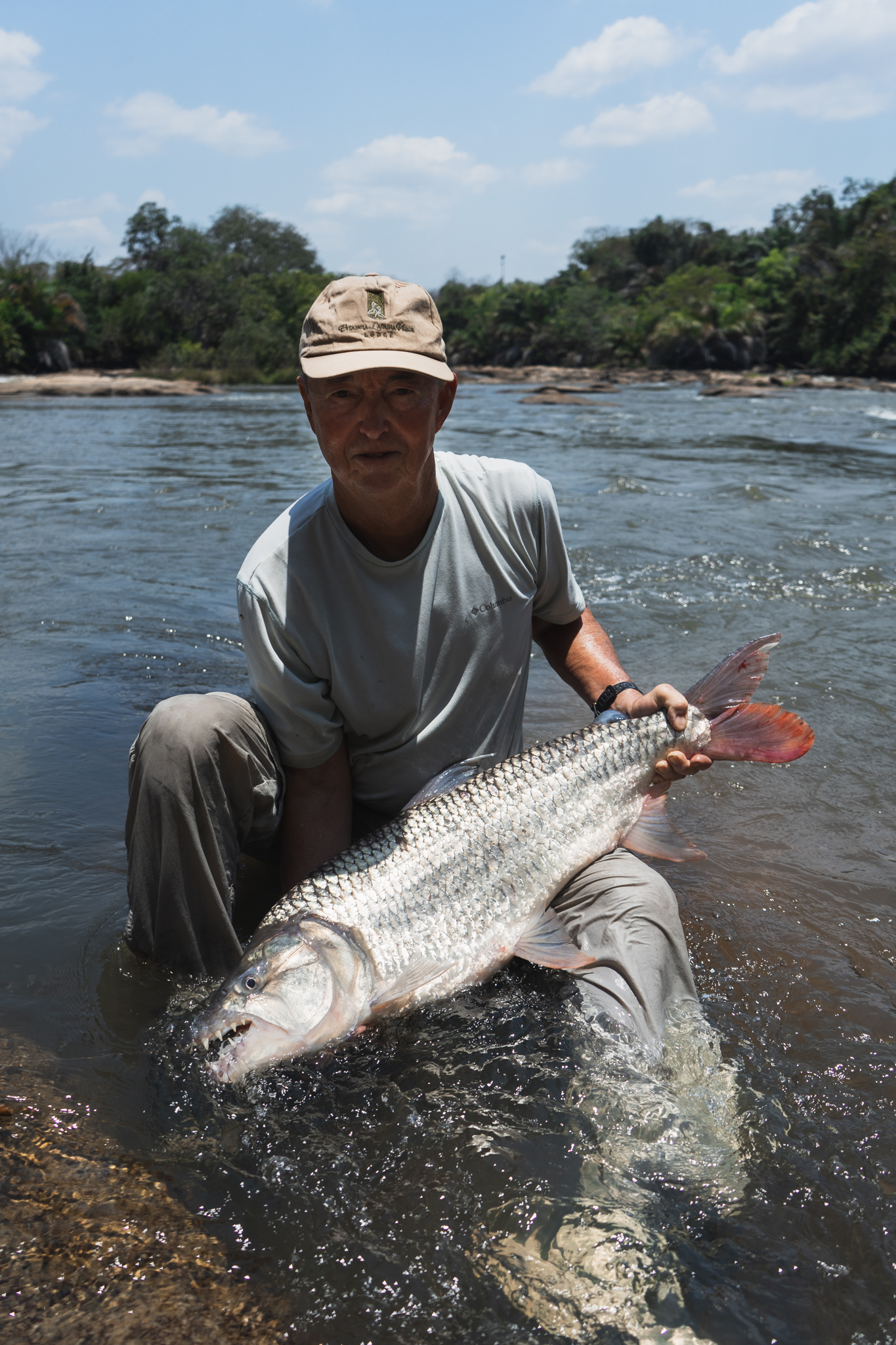 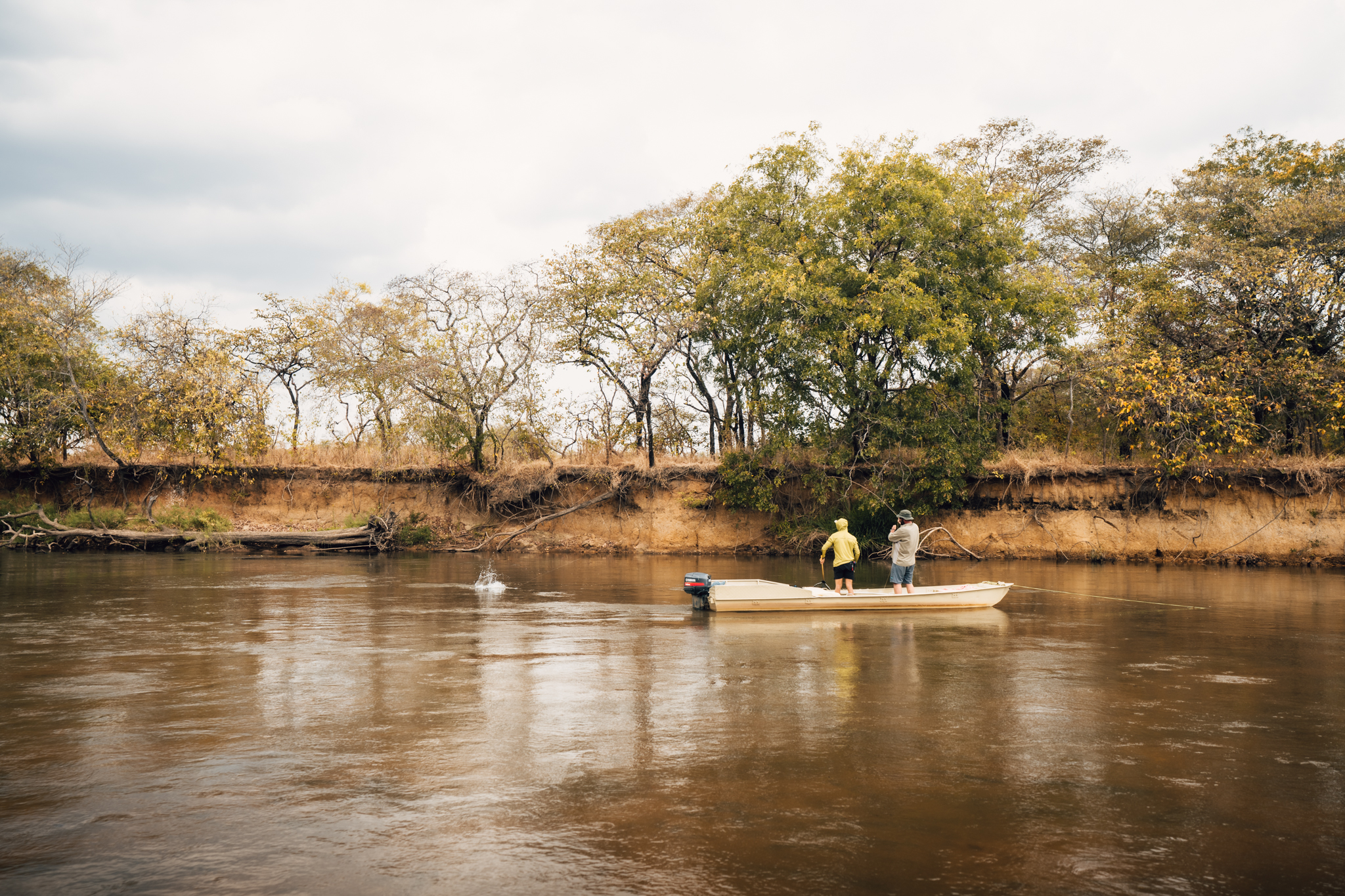