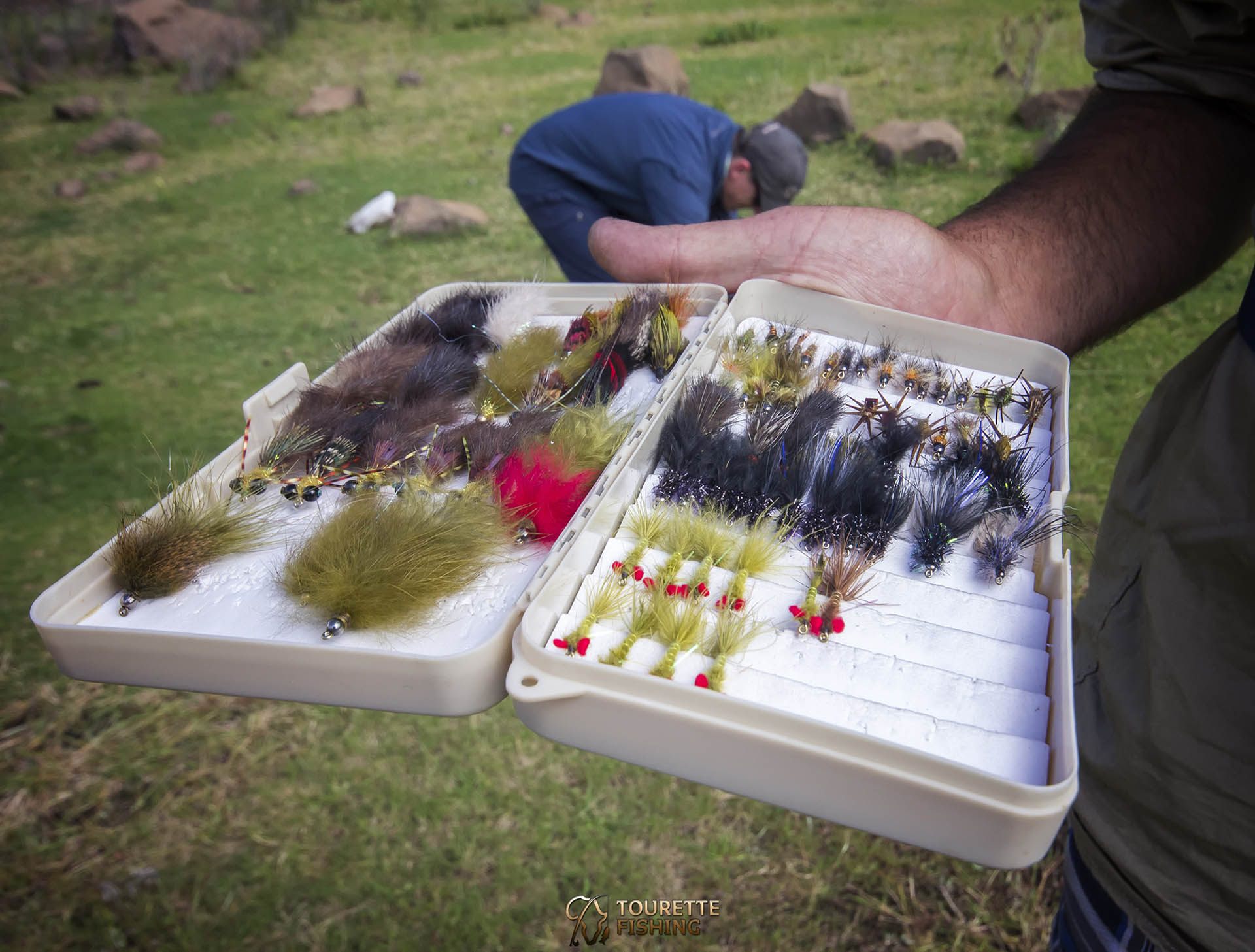 Selection of flies used in the dam

A cold chill in the air, winds pushing clouds over the high Maluti mountains from the west and the smell of rain in the air, it was certain, the hot sunny days of summer were slowly but surely coming to an end! Nonetheless, the yellowfish were still around in good numbers and with five new guests in camp, some fishing had to be done!

Shortly after arriving in camp, the gents were briefed on the days ahead, their tackle inspected and in no time we were ready to roll out. Unfortunately mother nature had other ideas, and not even 5min into the walk down the river the heavens opened up leaving everyone wet and cold! Needles to say, it did not take long for the kettle to be put onto the gas stove with everyone huddled in around it. 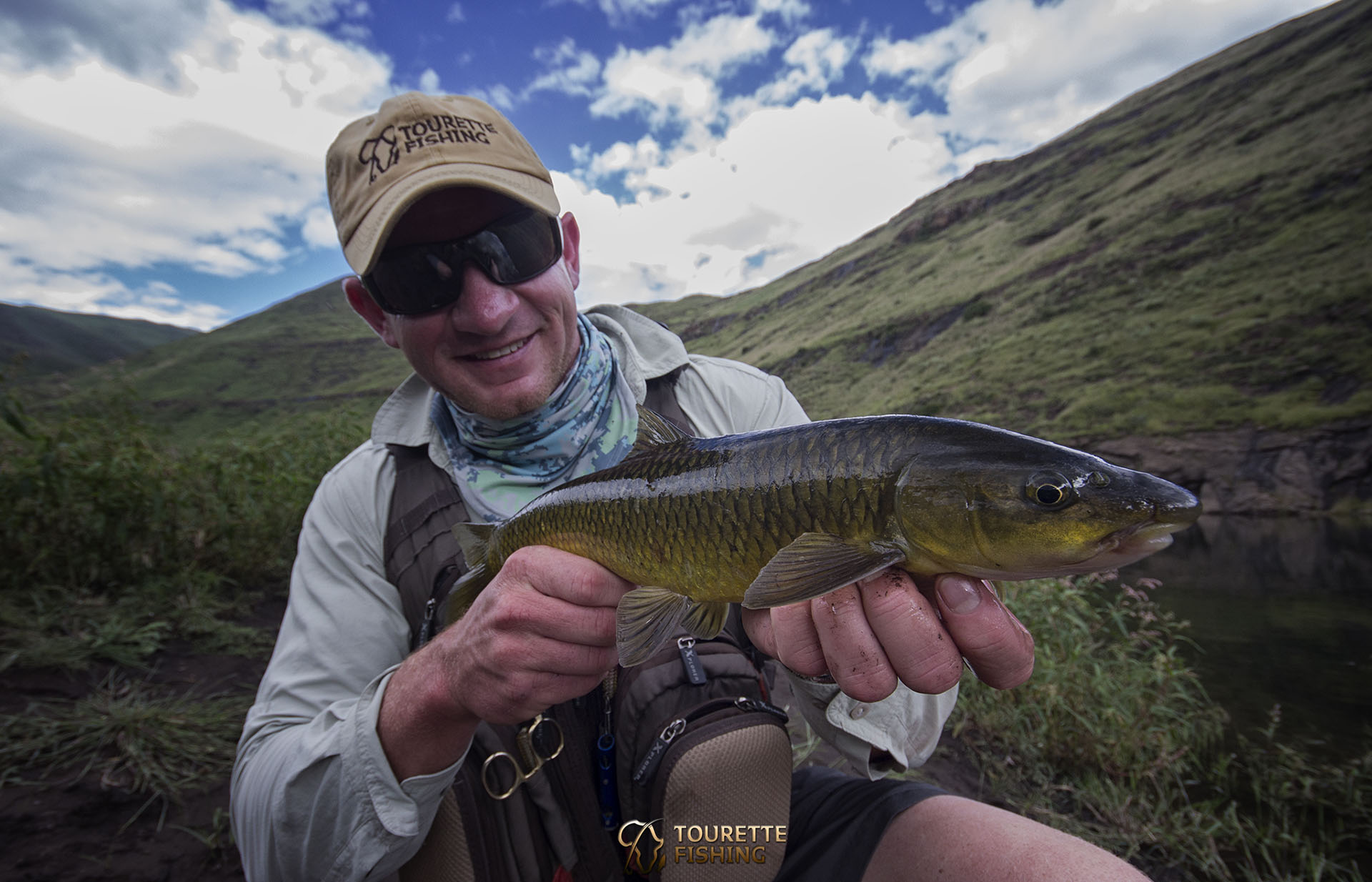 The first full day started off with really good conditions weather wise. The water temp in front of cap was still a bit colder than we would have liked so we decided to get into Leroy (the “trusty” camp cruiser) and fish a small inlet and bay about 15min drive from camp. This area had been producing for us in the past week when river conditions were not ideal.

This turned out to be a good call as all the guests got stuck into the yellowfish from the start. The vast majority of fish were taken on two nymphs rigged New Zealand style slowly drifted on the edge of a submerged weed bed. Hotspot, Hare&Copper and Copper John’s produced the goods. No real big fish were caught, but the vast majority of them were in the mid 30cm range. 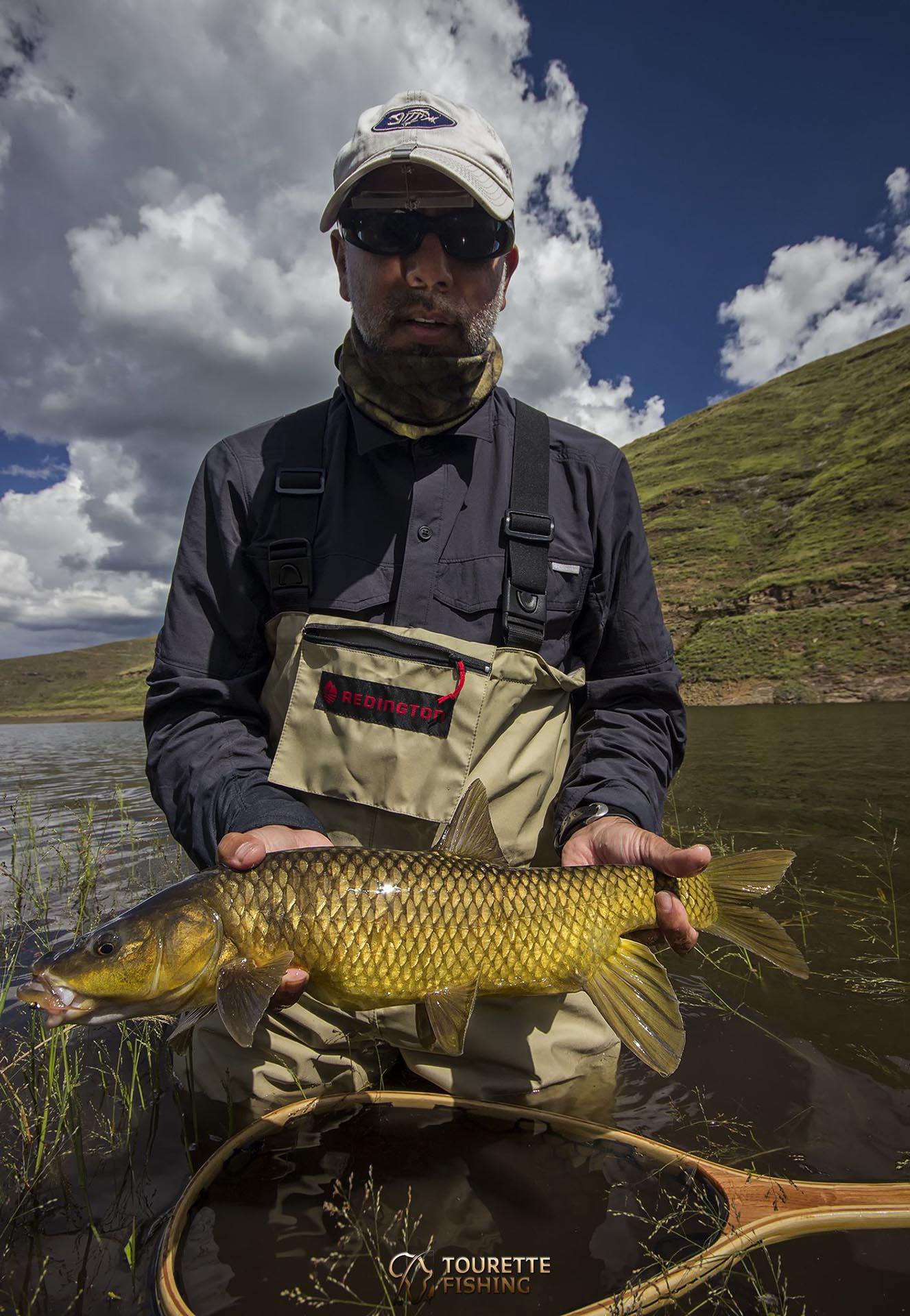 Cassim with a tank 55cm Yellow caught in the dam

After a quick lunch in camp we headed down river for the afternoon and fished a section just above the estuary. It started off slowly but during the last hour of daylight, as water temps reached the maximum, the fish became very active and were taking Klinkhammers and parachute adam’s like there was no tomorrow! Hats off the Richard who managed a really nice yellow in the mid 40cm.

With river conditions much the same on the second full day as the first, we decided to fish a very similar pattern to the day before; except this time round half the guys would stay on the same side of the dam while the others would cross over and fish the cliff and grass banks. The cliff side seemed to be the winning side as plenty fish were sighted and caught on both dry and nymphs. A is often the case when sight fishing to big fish in stillwaters, some really big fish were popped on the take. The highlight of the day was a 55cm fish landed by Cassim after an incredibly tense fight.

The guys were really happy as we headed back to camp to fish the river for the afternoon session. This turned out to be a little slower than expected but the guys still managed some great yellowfish and the odd trout. Richard again managed a good mid forty cm fish while the rest of the guys tucked into the fingerling sized trout on dry.

All in all a fun couple days in Lesotho. With some more heavy clouds creeping over the mountains (that were to bring floods to the entire area!) the group decided not to fish the last morning, and head out before the rains hampered their travel.

Only one more group to go before we start breaking down camp but if the weather will allow, only time will tell.