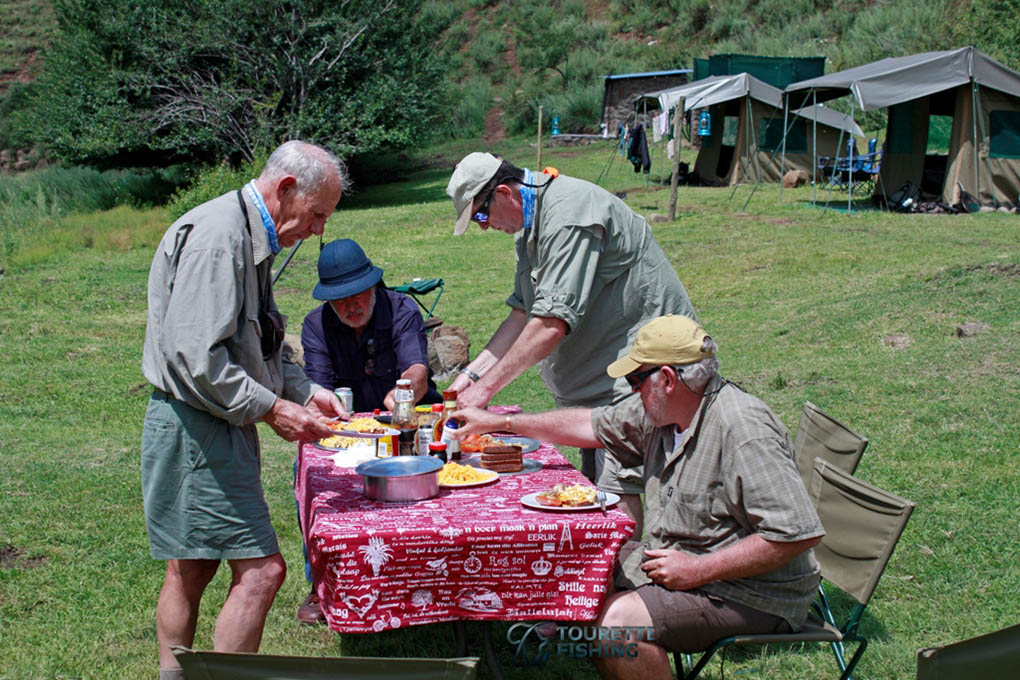 Breakfast time on the Bokong

Our trip started out in the village of Ha Lejone so that we could first fish the Malibamatsu river and its sister tributary the Motete .

Our group consisted of Murray Pedder from Flyfishers Unlimited and 4 of his guests namely Ken, Alan, Martin and Thys.

On arrival of the guests the rain Gods had decreed that we would be denigrated to the position of pontificators of weather and imbibers of scotch as the heavens opened up (Ken, Martin and Thys got a brief 15min session in before this, and manged to land 1 fish, and tempt a few more that unfortunately come unbuttoned). We did both of the above to the best of our abilities as we waited for the rain to stop so that we could hop in my trusty ’75 Cruiser and go in search of rivers that were clean and slow enough to fish the following morning. Martin had his Toyota Prado and followed behind. 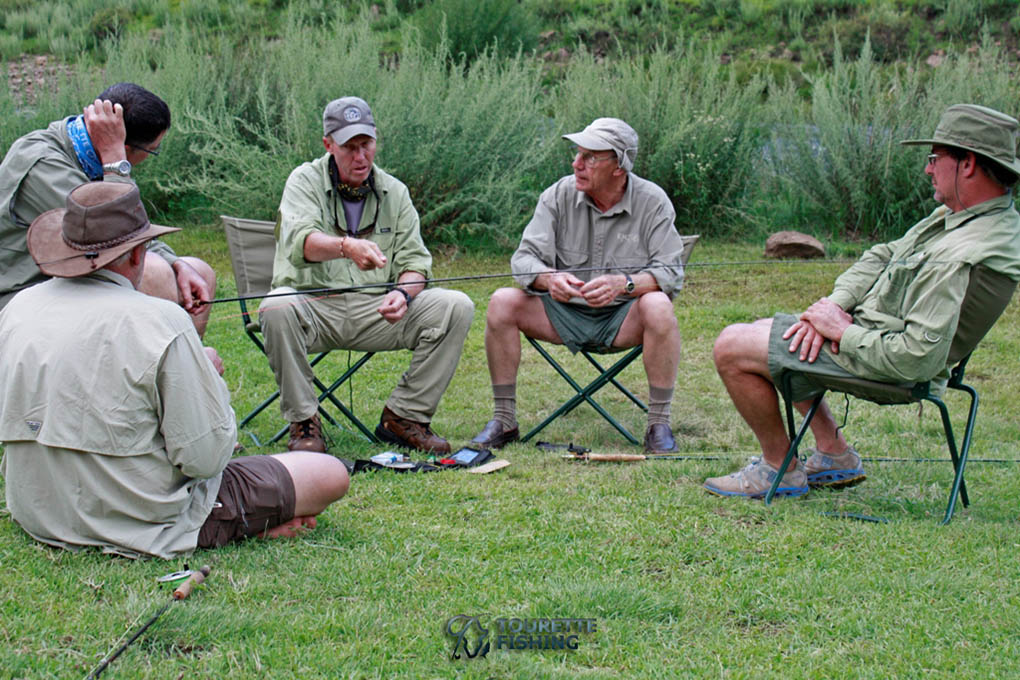 Murray working through Czech Nymphing setups with his group

We were to spend the first full day of the trip fishing the above mentioned rivers and after a scenically mind altering drive, we arrived at the Malibamatsu, only to find it coming down brown and fast like the splashboard of a Hindi toilet in the height of the mango season!

Being a of a democratic nature and also noticing that Alan,Thys and Martin were looking at the river as if they would like to have a stab at it with heavy nymphs and a strike indicator, I suggested that I would cross over the ridge (read Mountain) to the confluence (about 45 min drive)to see if visibility and flow were any better , leaving them in the capable hands of Pierre my fellow guide.

To cut a long story short, it was the Motete river that was the culprit, and the Malibamatsu above the confluence was running strong, but mercifully a bit clearer! I had taken Ken and Murray with me and they went on down to the river and got into some nice yellows after a couple of casts. After waiting for the others to arrive, we went down and after a challenging crossing for some managed to get some fishing in that resulted on a few nice fish, but nothing like we were used to on this river. We fished as late as was safe and then hiked out on the contour path back to the vehicles. In total 11 fish were landed before we climbed out of the valley and headed back to base

The trip past Katse and onto to our main camp on the Bokong was uneventful apart from the usual mind-blowing scenery.

Both Pierre and I were quietly holding thumbs that the Bokong River in front of camp would be behaving itself, but considering how much rain was in the area the gesture seemed futile. 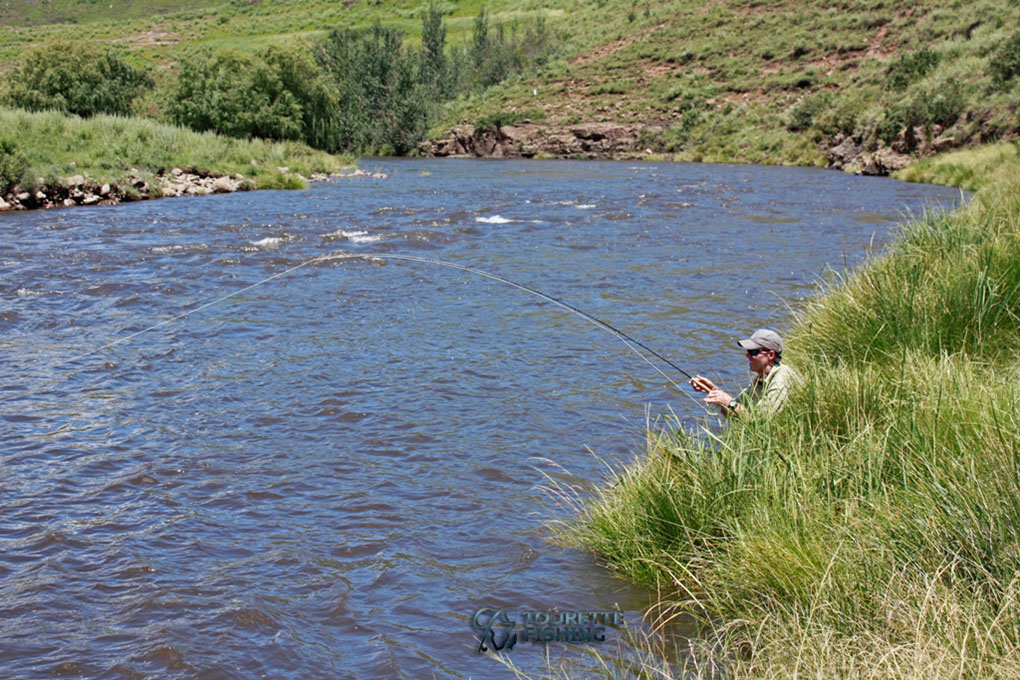 Czech Nymphing the fast water in front of camp

Upon our arrival in camp our hearts sank, as we were presented with a very angry river frothing at the mouth and flaying its banks as if to dare us to contemplate bringing a fly near its surface! Unperturbed our hardy guests tackled up and did what they had come to do, fish the river of course….!

The river was unfordable so we were constrained to the one bank, and as Murray clearly pointed out , the only way to get down to fish in this velocity of water was to fish deep, close and heavy. Czech nymphing would have to be the order of the day and so it was.

Martin coerced a yellow from its hiding place in the torrent as did Murray and the others, but it was hard demanding fishing and not quite the style that our guests had envisioned when they decided to fish Lesotho rivers with us. 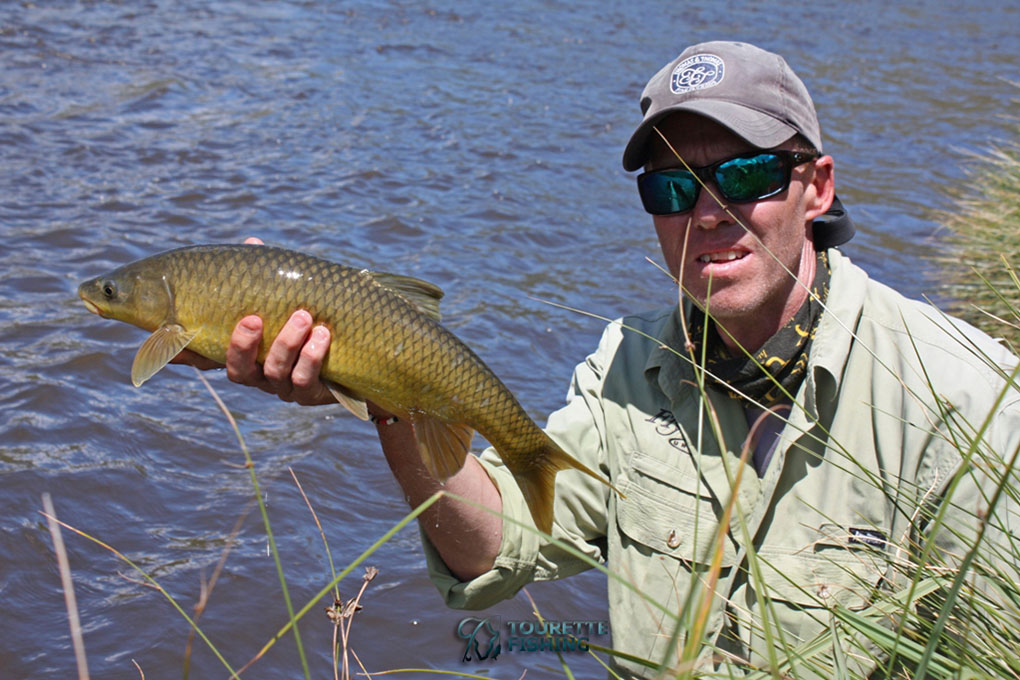 Success in the fast water

Upon closer inspection to the amount of effort the guys were putting in versus the rewards, we decided that discretion was the better part of valour and we decided to head downstream and fish the estuary where our raging river calmed down and became a clearer more fishable water as it met the big water of the Katse dam.

Upon arrival we noticed just how many fish were rising and spirits were immediately lifted and rigs were altered. Some using dries suspending small nymphs and others choosing to fish deeper using only nymphs. It proved successful with all taking yellows in a relatively short time and fishermen commenting on how feisty the yellows were as they put up a good fight right until they were netted. 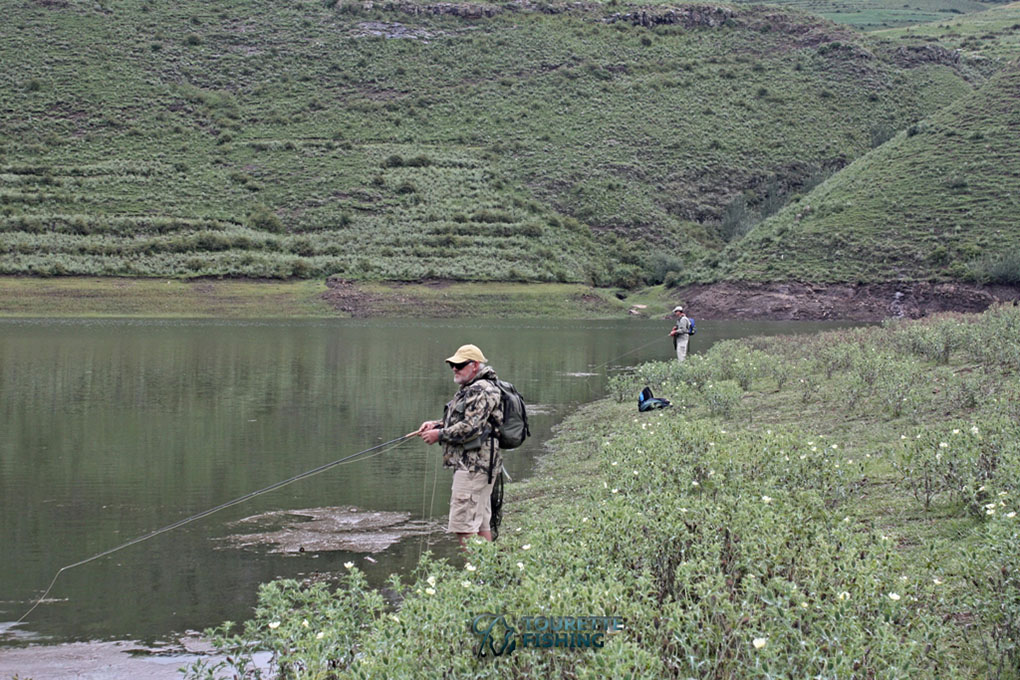 All in all it was a good day that improved even more as we adjusted our techniques and rigs to suit the conditions and as the day ended we trekked back to base camp, tired but happy with our performance in this unusually wet environment.

After a good meal and many drinks around the campfire to stave off the cold wet weather around us and blustery convivial conversations tinged with bouts of raucous laughter, we retired to bed fortified to face what tomorrow would bring.

The next day dawned dry after a full nights rain and the river was as challenging as ever. The group consensus was to try the river again as it was a tad lower and clearing, Ken being the exception as he wanted more of what the dam had given us the previous day. I elected to go with him and keep him company. 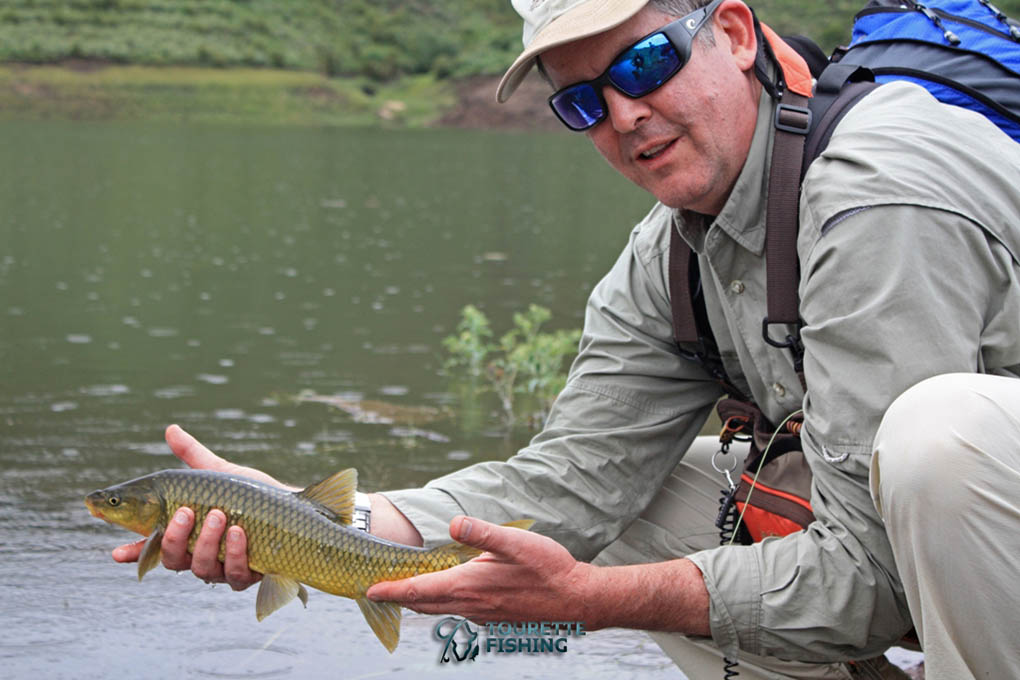 Martin getting in on the action

It did not take long for Ken to get into the yellows on the dam and at the end of his session he declared , having hooked 11 and landed 9 really nice yellows on a fly of his tying called the “Black Magic” ( you will have to ask Ken for details, as he blindfolded me everytime I came near him)

We returned a happy pair, but were told on arrival in camp that the river had once again come out tops in the battle to keep her fish from prying flies, and subsequently our rods wielding warriors had come away with very little to show for their efforts.

That evening much was said about the weather, none of it very flattering, but nonetheless the food and good quality scotch made up for the lack of fish numbers. Jokes and laughter flew thick and fast and bonhomie was the order of the night.

The day of departure dawned blue and the sun was hot as our guests prepared for the trek back home. The river had dropped substantially , but sadly the temperature was a tad too cold at 15 deg and as everybody had a last session before leaving. A few small trout were caught but no yellows. They would only contemplate the fly when things warmed up…. With the weather on the turn, things are looking good for the next group.