Ray, Paddy, Bruce, Kevin and Paul were back in camp along with two friends Garry and Crash, both visiting for their first time, eager to experience the story’s their buddies had told them about…and prove the stories were true! To the newcomers this week, we were please to illustrate that a place exists where one can still catch trophy tiger fish in numbers on a regular basis. To our repeat guests, it showed that the strict fishery rules implemented by TF and KNS including a strict catch and release policy, stringent fish handling rules, and a comprehensive beat management system is paying off. Proof in the fact that, over the years since their last trip, the rivers continue to fish as if they had never been fished before.

With waters now dropping rapidly after the horrid rain in the previous week, all involved were expecting good results over the next six days. Bruce and his five friends started their trip to the Ruhudji, swatting at the ever persistent tsetse flies en route, reminding them they were deep in the African bush. Paul readied himself on the Mnyera for a re-match with Africa’s fresh water heavy-weight champion the following day. With seasoned veterans behind the reel, it’s no wonder that the anglers this week took the fight to the fish, and came out tops! 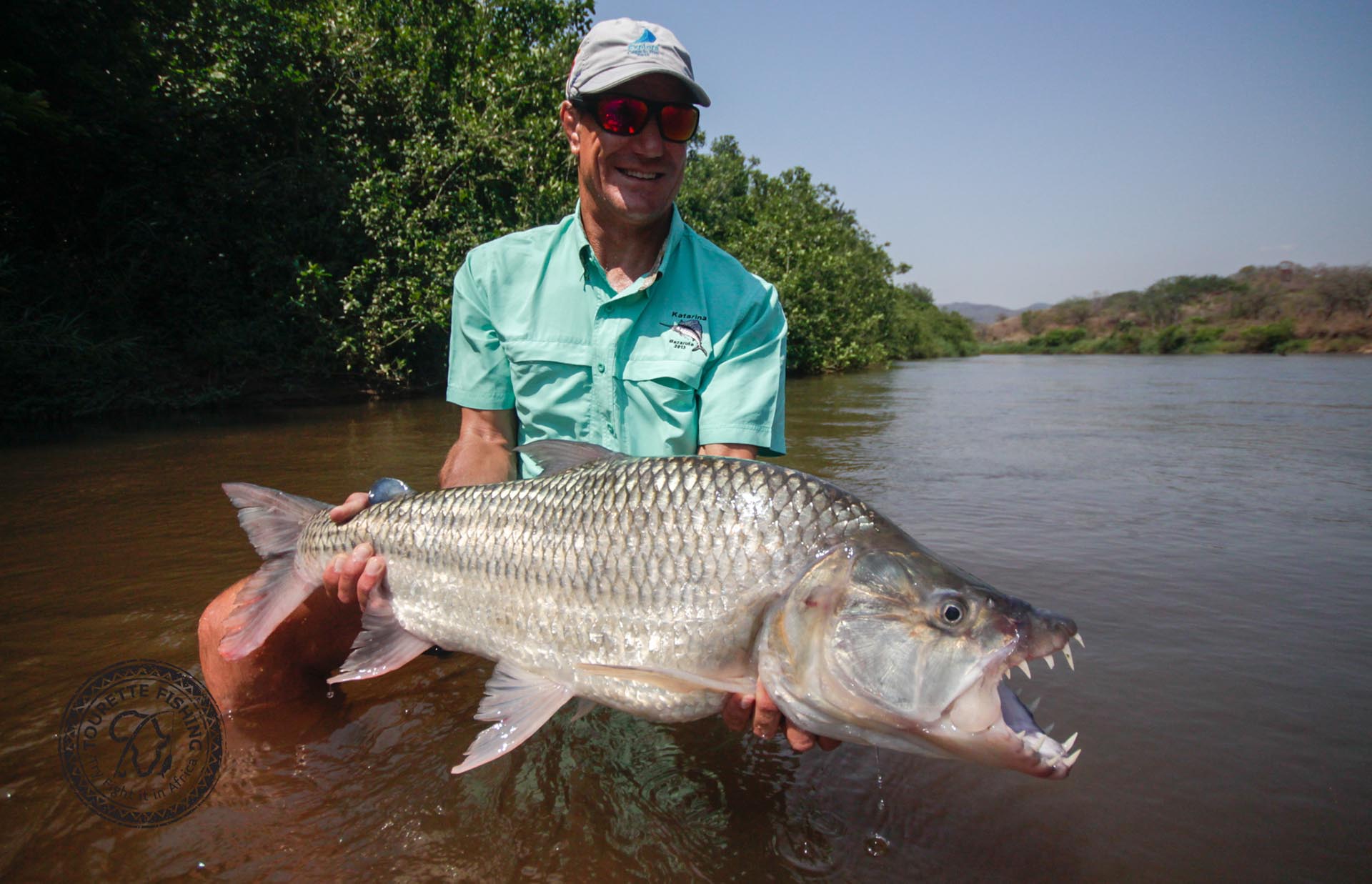 The guys on the Ruhudji barely wasted time for breakfast and were once again drifting passed the same logs, clay banks and phragmites that they had passed on two years before. Although the memories off each piece of structure had faded it was obvious that, when the first fish started pealing line off the finest kind off reels, the fight of a big tigerfish and what to do in such a situation was not easily forgotten. The guys used their past experience well and started to convert many big trophies. Kevin and Garry proving true form as they muscled in, amongst other great fish, a 20lb fish each. Paddy having an excellent last day on the Ruhudji which included three landed double-ups his partner, and amongst many other smaller fish landing, on his own, a 17, 15, 14, 13, 11, and 10 pounder. The guys on the Ruhudji seemed to be victorious over the first three days, at least on the water this was the case… 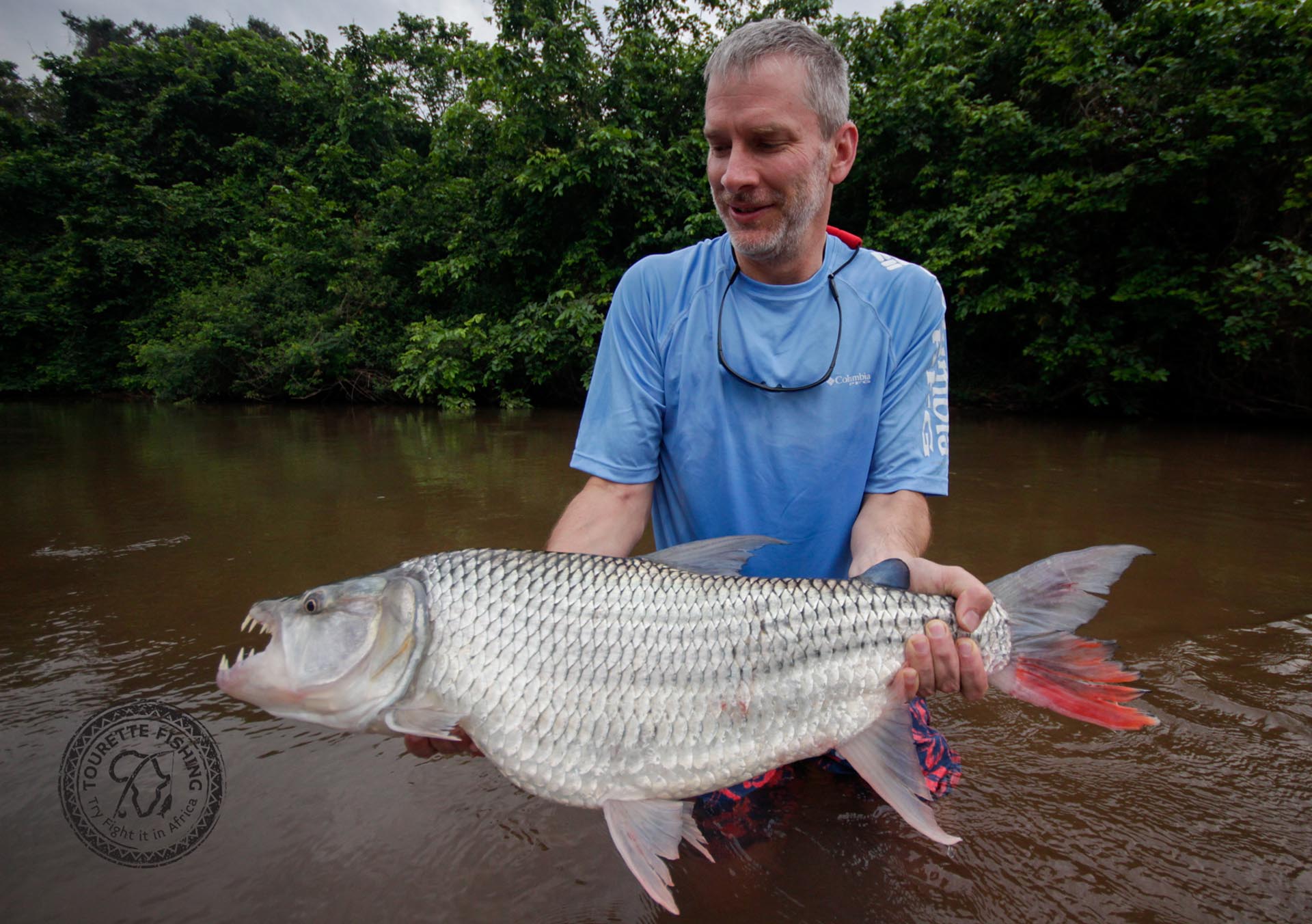 “Seeafu” or Army ant as it is commonly known, appears on a few rare occasions over the season. Usually first appearing in small numbers while we eat dinner on a sand bank in front of camp on the Ruhudji River. They seem harmless at first, but after releasing a pheromone into the night sky, their ranks swell and they are soon organized into black carpet that is the Seeafu invasion. The soldier ant of this species has a set of pincers that lock into flesh with such force that it is a proven substitute for stitching wounds amongst more rural African tribes, so it is no surprise that when this formidable force reach our immediate location they spread panic. Even the most bush-hardened of our guests will join us in the retreat to Seeafu-less ground. This week it was our ever smiling boat driver, Saidi Alley, who was the victim of this pillage. Showing us his room covered with dead Seeafu in the millions from the battle he raged the night before , it was obvious that he had emptied enough cans of DOOM in his courters to float a hot-air balloon over the Serengeti. Nature however will always win, and the Seeafu would be back along with the tsetse fly, along with the rain, along with the hippo and crocodiles, and everything else that makes the Mnyera and Ruhudji Rivers, deep in the Tanzania wilds, such a unique destination. A place that takes hold of your sole, and brings amazing guests, the likes of Paul Lavins (at 83 years of age) back year after a year. 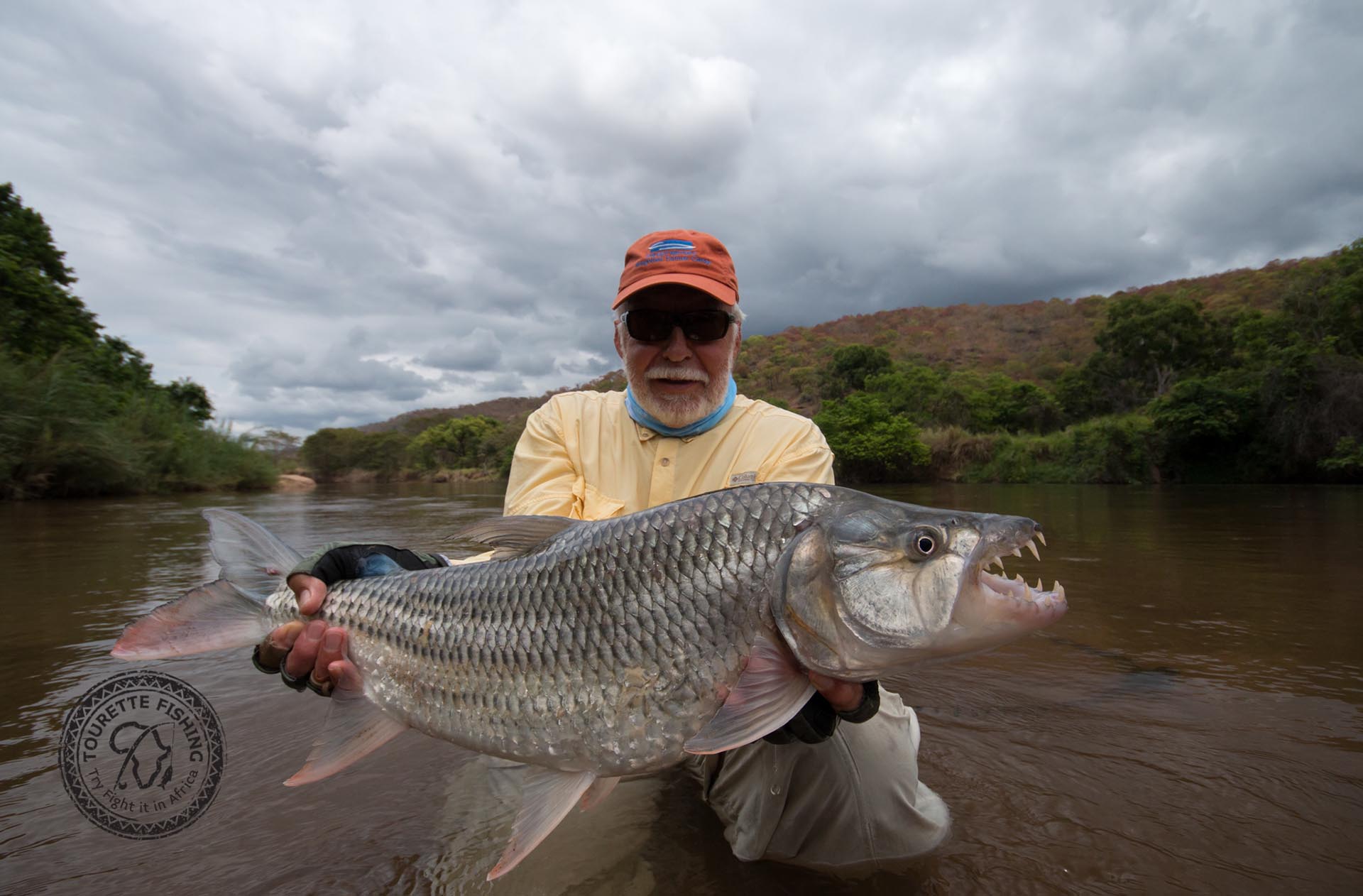 For Paul this was his third trip with us in Tanzania and he was adamant to match it with his last. Pauls first three days on the Mnyera were tough in any mans book but through persistence he managed to connect to a good amount of big fish that wrenched line and fly into the depths, and on a few occasions rendering some of the strongest hooks on the market bent and useless. Paul’s days on the Ruhudji were not easy either, but fishing for these fish seldom is. Paul pushed through the loss of great fish and rain and eventually was rewarded with two 12lb pounders, an 11 pounder and several smaller fish. A great score in view of the circumstances. The guys on the Mnyera were too, treated to some exceptional tiger fishing.

The first day on the Mnyera for Ray and the guys was one that would be turned back too in our catch register in the future. Bruce started things off in the rocky sections of the upper Mnyera with a 17 and 15 pounder that ate his blue and white clouser. Ray fought through several wrap-arounds to land a beautiful 18lb fish, Paddy landing another 17 and amongst a handful of other double digit fish spread between the group. Crash experienced one of the greatest fights I have ever witnessed on the Mnyera… 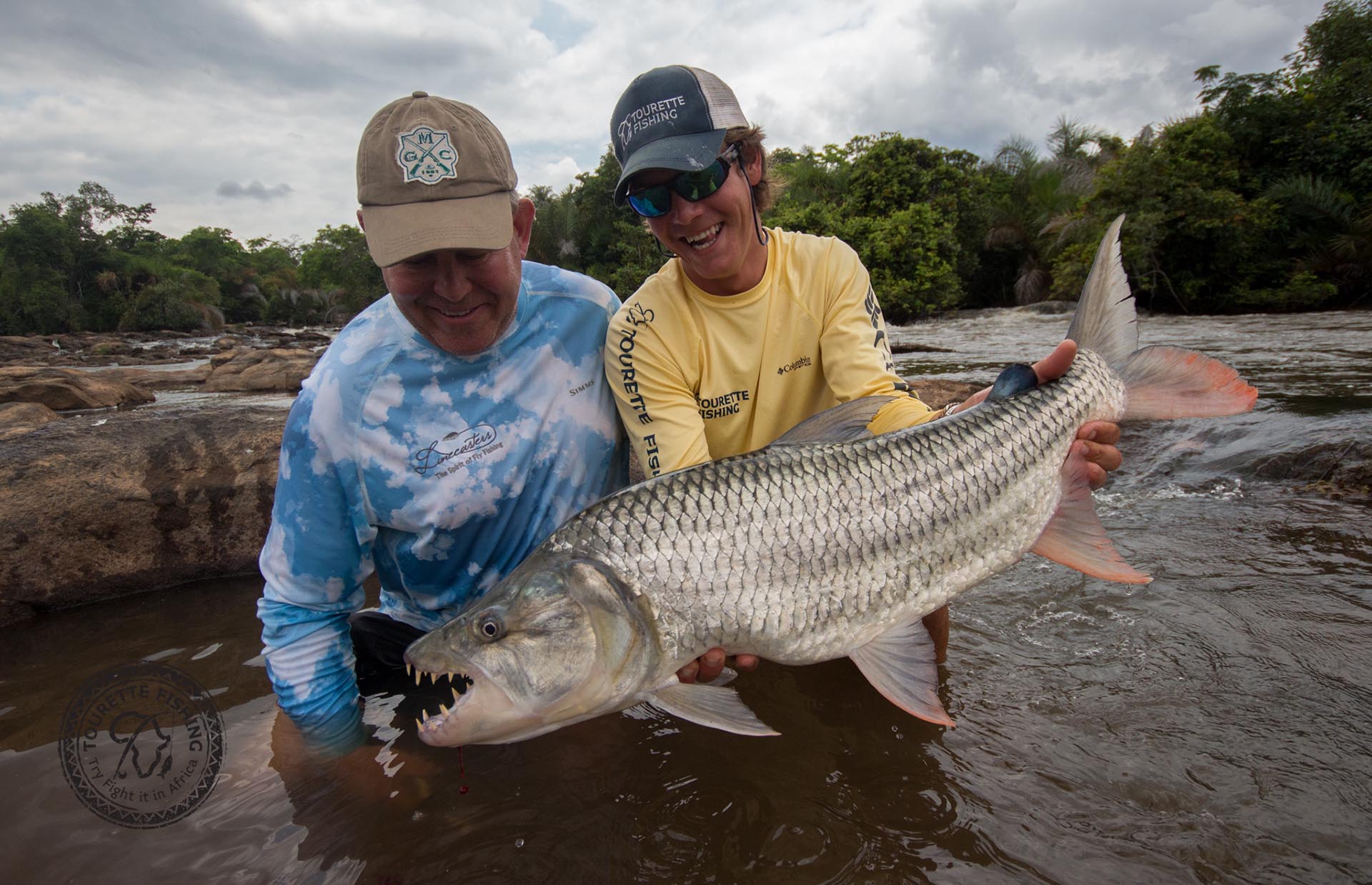 Drifting a shallow section on the upper Mnyera scattered with numerous logs and trees Crash put in a perfect cast between a fork of roots protruding off the bank and quickly became tight with fish that seemed to save all its fight for this one day. The silver giant launched into the air several times as it charged downstream, flaring its blood red gills as it put Crash and his gear to the test. After a very tense fight we were kneeled in some admittedly precarious water for a photograph, but we felt safe as Crash was holding in his hands a true monster of the river, a tiger fish weigh in at 22lbs. After a tough day to follow the guys ended their trip in the Kasingo Rapids where they landed fish in the 19, 17, 15 pound range, along with many other fine trophies. A bush braai and a couple of cold beers for lunch could not have been a better end to this great week

Kind regards and a big thanks to all the guys for joining us here in Tanzania. We hope to see you all back here for round three! 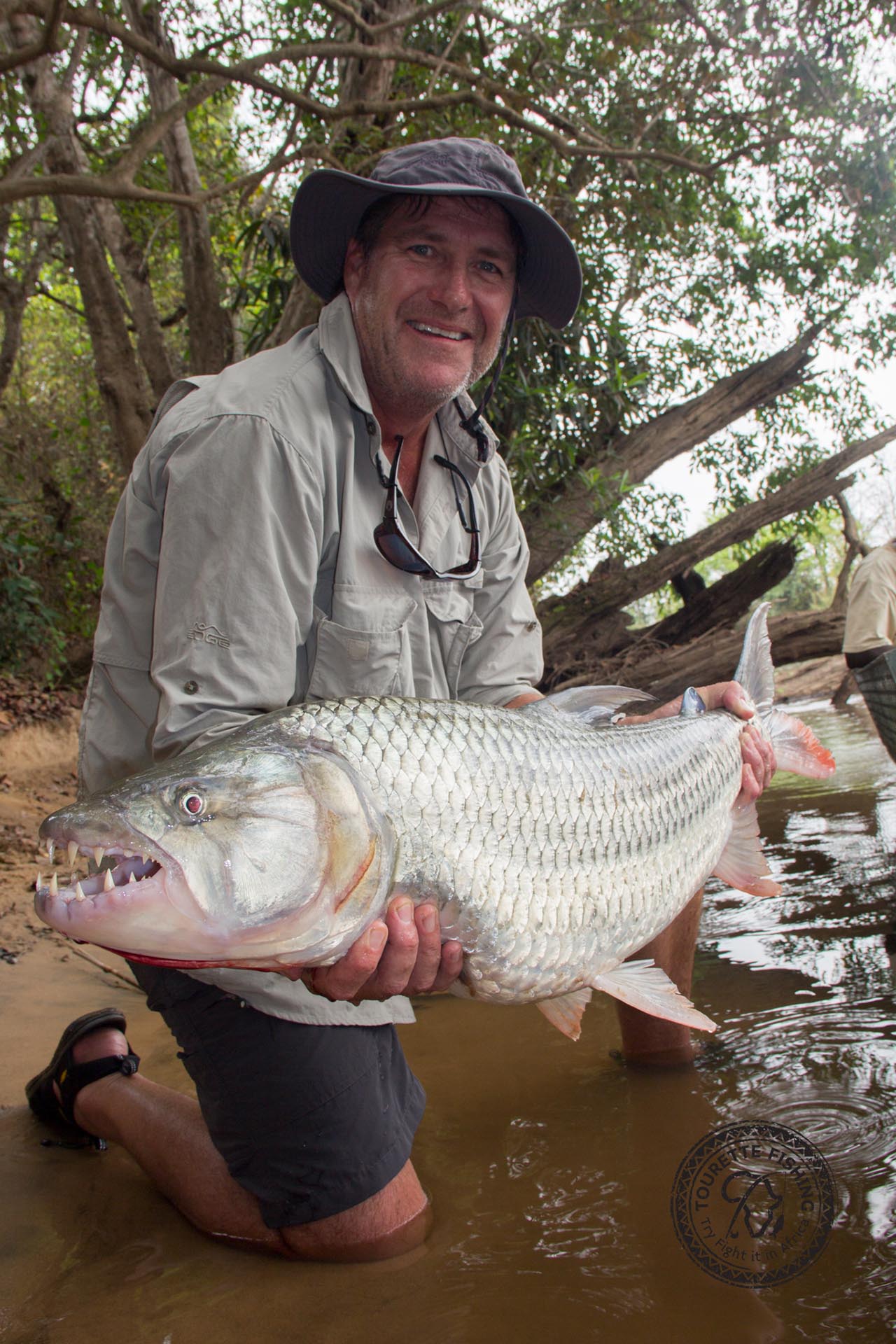