The subject for this week, the 6th week of the 2014 season in Tanzania, is rain. The fear of rain amongst the guides in Tanzania is deep seated and every day while polling our guests down these rivers a keen eye is kept on the horizon for marauding cumulonimbus clouds. Once a year, at least, these clouds arrive in the Kilombero and dump their load on the valley causing trouble mid season! However this time, the trip was far from miserable.

Mike, Ringo, Seb, Mark, Graham, Rod were friends all in the Tobacco selling industry and Simon and Frank, long time fishing friends from the states arrived in camp under a hot cloudless sky… as clichéd as its sounds, the scene was truly set for an excellent fishing trip.

The teams split and Mike, Ringo, Rod and Graham started their drive through the beautiful Kilombero valley to Samaki Camp on the Ruhudji, while Seb, Mark, Simon and Frank remained on the Mnyera river, eagerly waiting their first day battling with the enormous tiger fish that waited to wreck yet more of the flies that drifted passed their noses… and a battle it was, both with the elements and on river.

The tigers seemed to jump the gun and at breakfast the river was alive with explosions of white water and terrified baitfish. Flies were soon cast amongst these bait fish and the anglers started to connect with fish from the word go. Day one on the Ruhudji the guys were in on the action as well, and remained busy though out the day. In true Ruhudji style, many of the large fish hooked were accompanied by similar sized monsters all the way to the boat, fighting for the fly trapped in the hooked fishes jaw. On one occasion, a fish actually getting its teeth entangled in the trace protruding out of the original fish’s mouth and inevitably pulling the fly loose, leaving the unlucky angler fishless 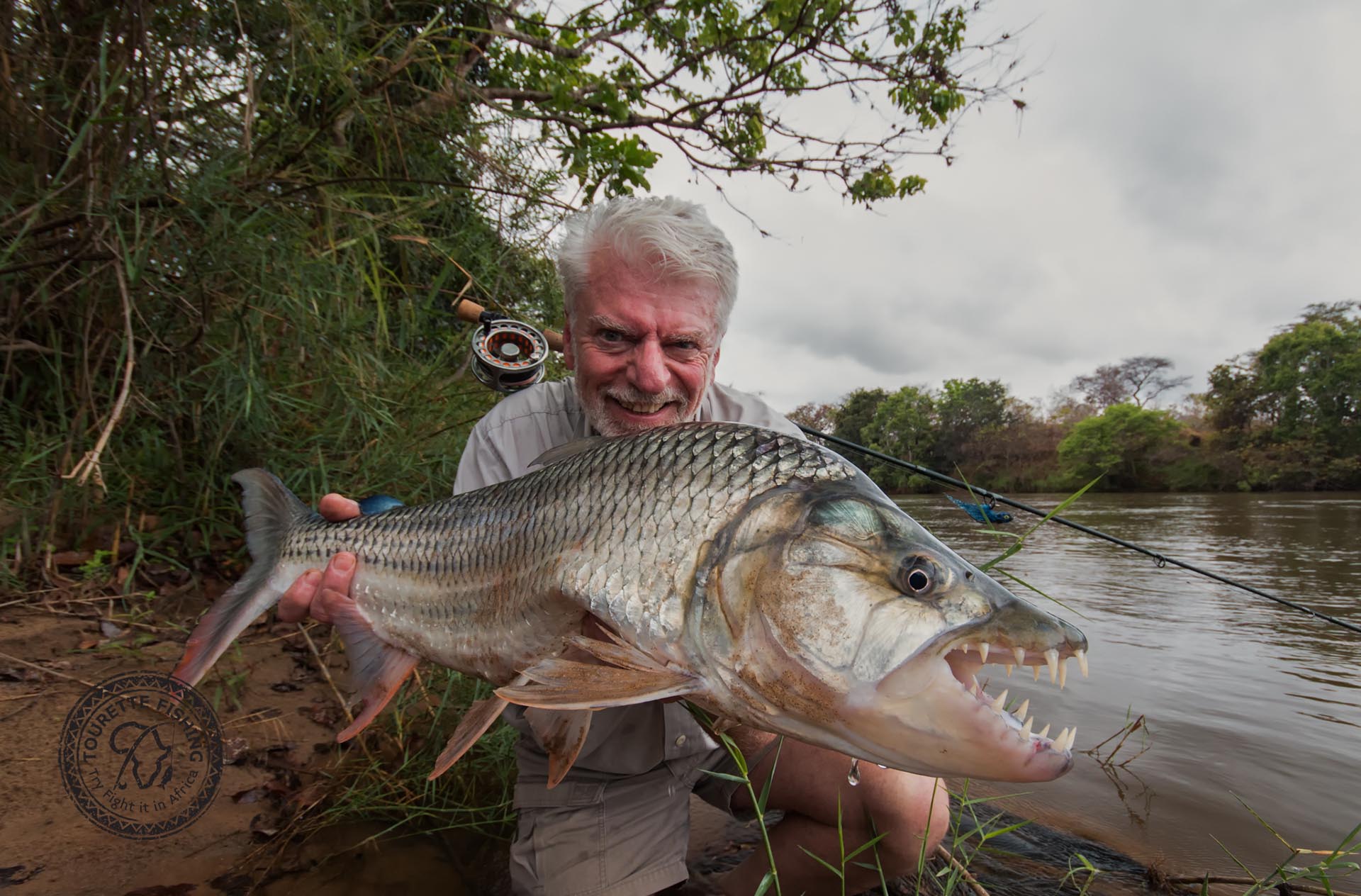 The fish came onto the bite in big way the further into the day , and anglers were connecting to fish behind almost every piece of structuyre and in all good looking lies. The chaos of these predators escalated to the point where a fish launched itself into the boat, connecting guide Stu Harley on his inner thigh and inflicting three deep gashes’s to remind him of the day. By late afternoon several 13 and 11 pounders had been landed and things were looking good. However, over the horizon crept the dark grey menace, growling as it approached. By 4:30pm guides, guesst and boat drivers were drenched as they stood in the grey haze that was early rains. The fishing did not die off that evening as all anglers persisted through the down pour and landed and handful more good fish. The trip back to camp in the rain was cold but spirits were high after a great day on the middle Mnyera and lower Ruhudji. In the back of everyone’s head, though, was the dreaded question, ” what will the rain do to the river?”.

To explain the next 4 days of this trip day by day would get repetitive and pointless. The rivers swelled and as we drifted down stream it was as if we were floating on a vast expanse of “Matabella poridge”. Hits became rare and a part from Ringo’s massive 18 pounder out of the Kasingo rapids, few fish made it to the net. At this point you might ask why I am still writing. Well now more than ever I have a reason to keep writing. 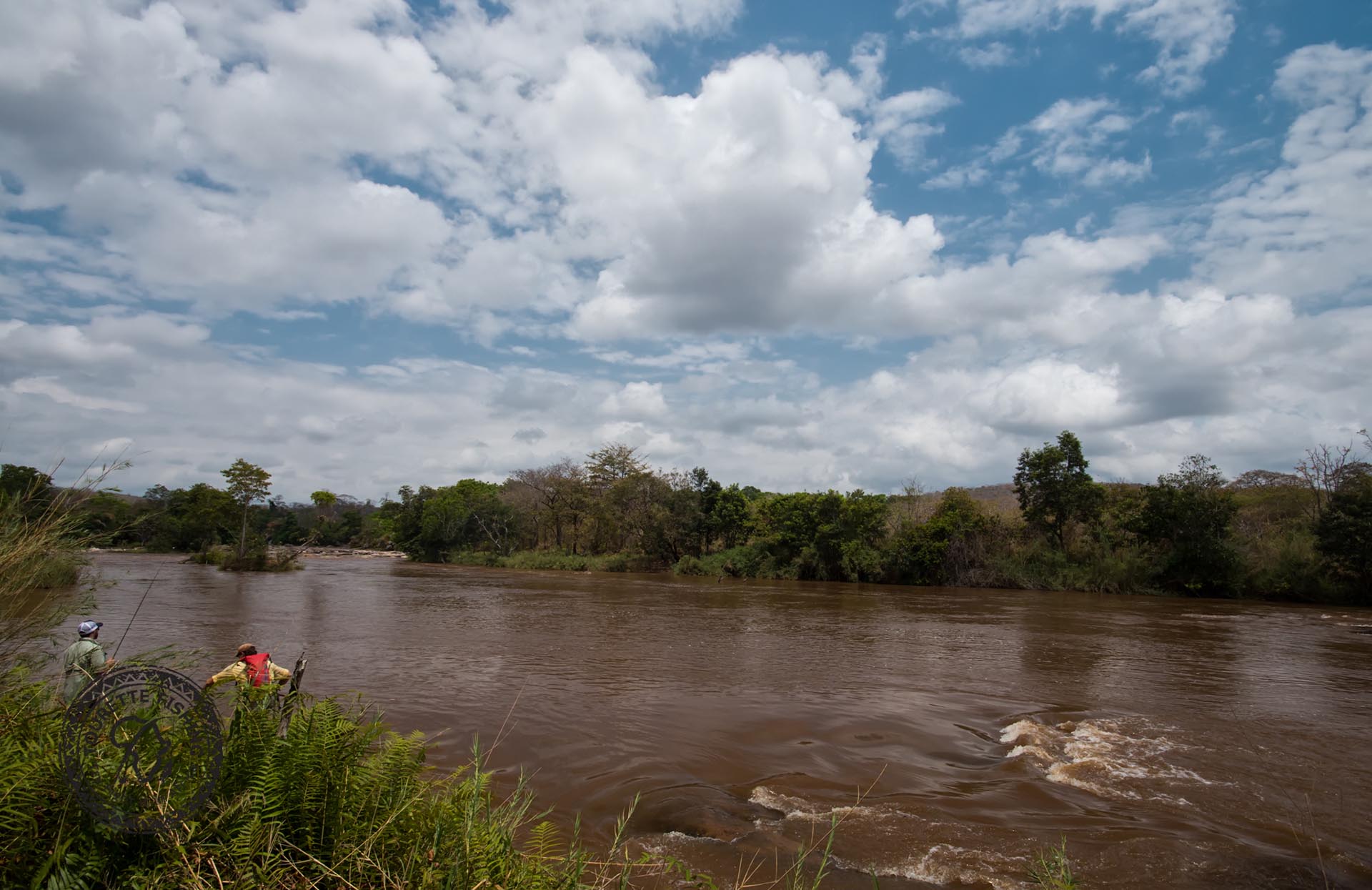 Tanzania in flood. Note the muddy color of the water

To many these fishing trips to a far out destinations are trips of a life time. Once that plane touches down there is no looking back, so when mother nature grins while spitting here 50ml of rain upon the water you are supposed to be fishing it is important to both guide and angler to still make the most of their trip and not give up. These anglers did just that. With a keen interest for birds, trees and the general “going-ons ” above and below the water, the group let themselves be entertained by this beautiful place, in all her natural beauty. After fishing really hard for only a few fish all day, the evening were spent fire side with tears rolling out our eyes from shear hysteria as the guys retold stories and sang songs of the “good old days” to the tune of Simons harmonica. Even with such tough fishing it seemed nothing could have made this trip any more enjoyable. Mother Nature had thrown everything she had at us but the guys took it with a pinch of salt and turned it into a week that neither guide nor guest will forget. 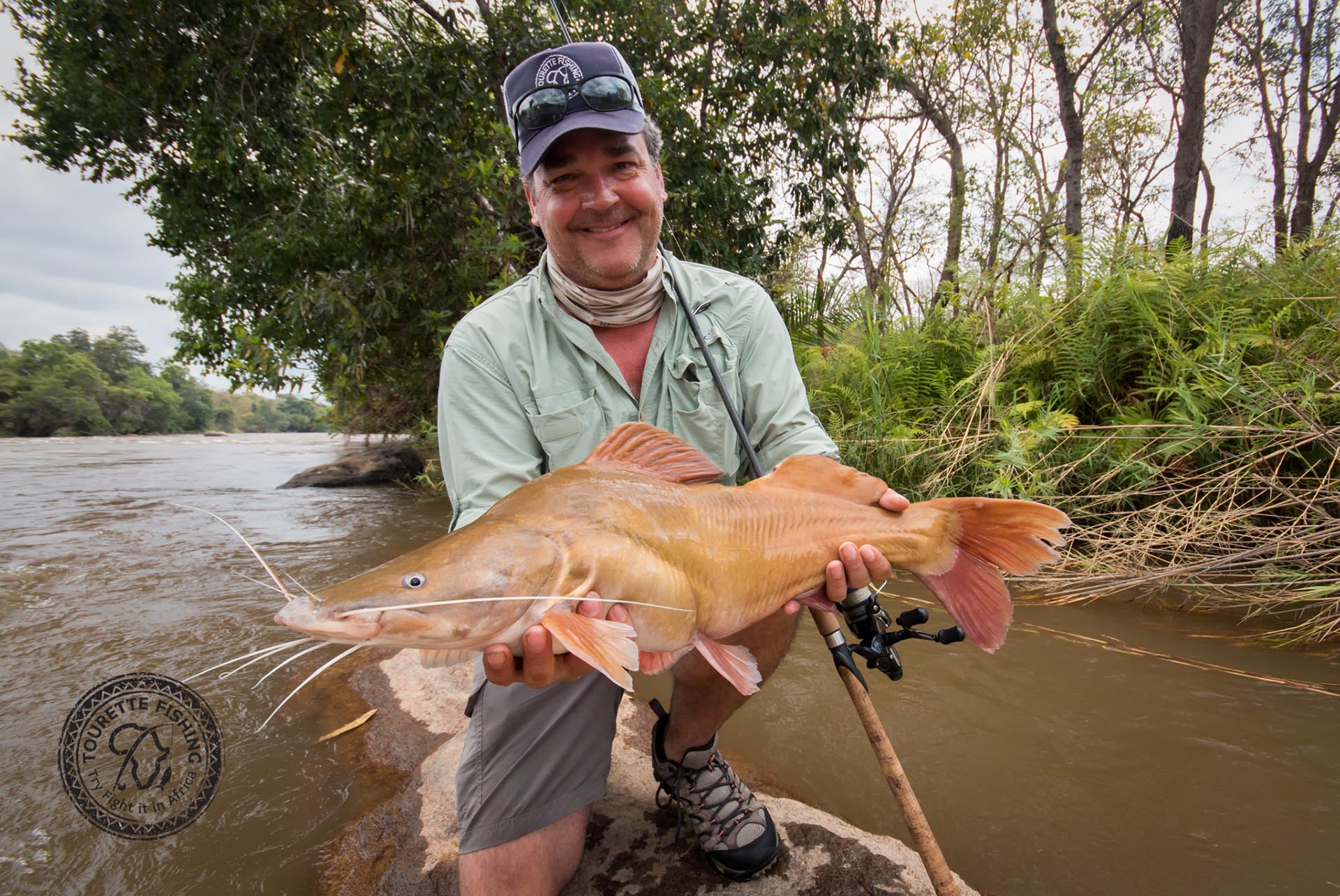 With the rain gone the waters started to drop and the clarity improved with every day and along came the final full days fishing. The cards were on the table and it was time to give it our all. The guys hit the boats running before the first birds had bothered to shout their annoyance at the rising sun. With the Mnyera still high and cold, the guys struggled throughout the day but still managed to net a 13 and eleven pounder. The Ruhudji, in far better condition, fished well and the guys managed to land two 13’s, two 10’s, an 11 pounder along with several smaller fish on their last day.

After a tough week on the water, it was time to say goodbye to yet another group of guests. After many nights reminiscing on life, and long days on the river, we guides learnt one thing, amongst good company, nothing can ruin a fishing trip. 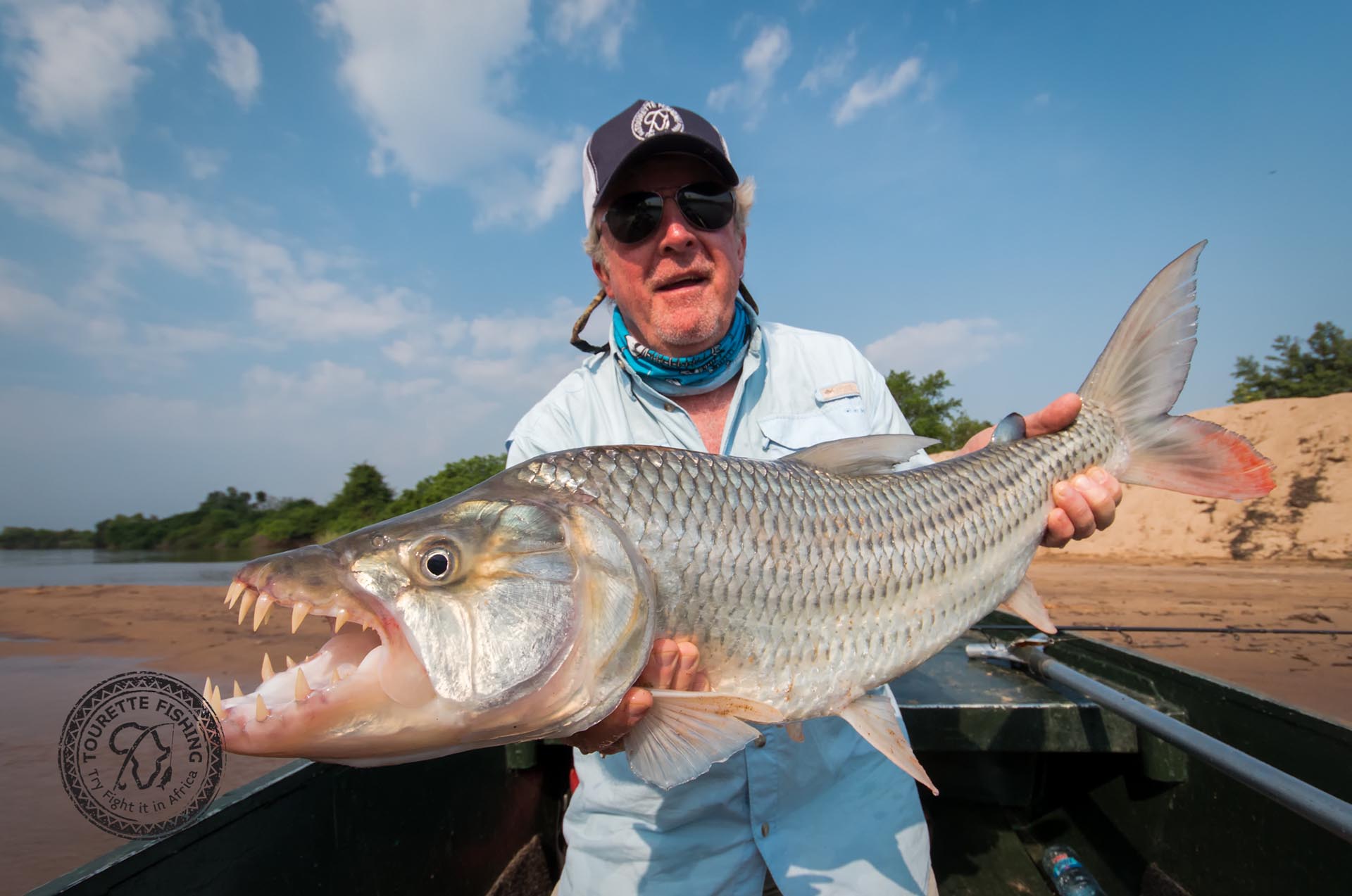 Another 13lbs fish for Mike Roberts despite the tough conditions 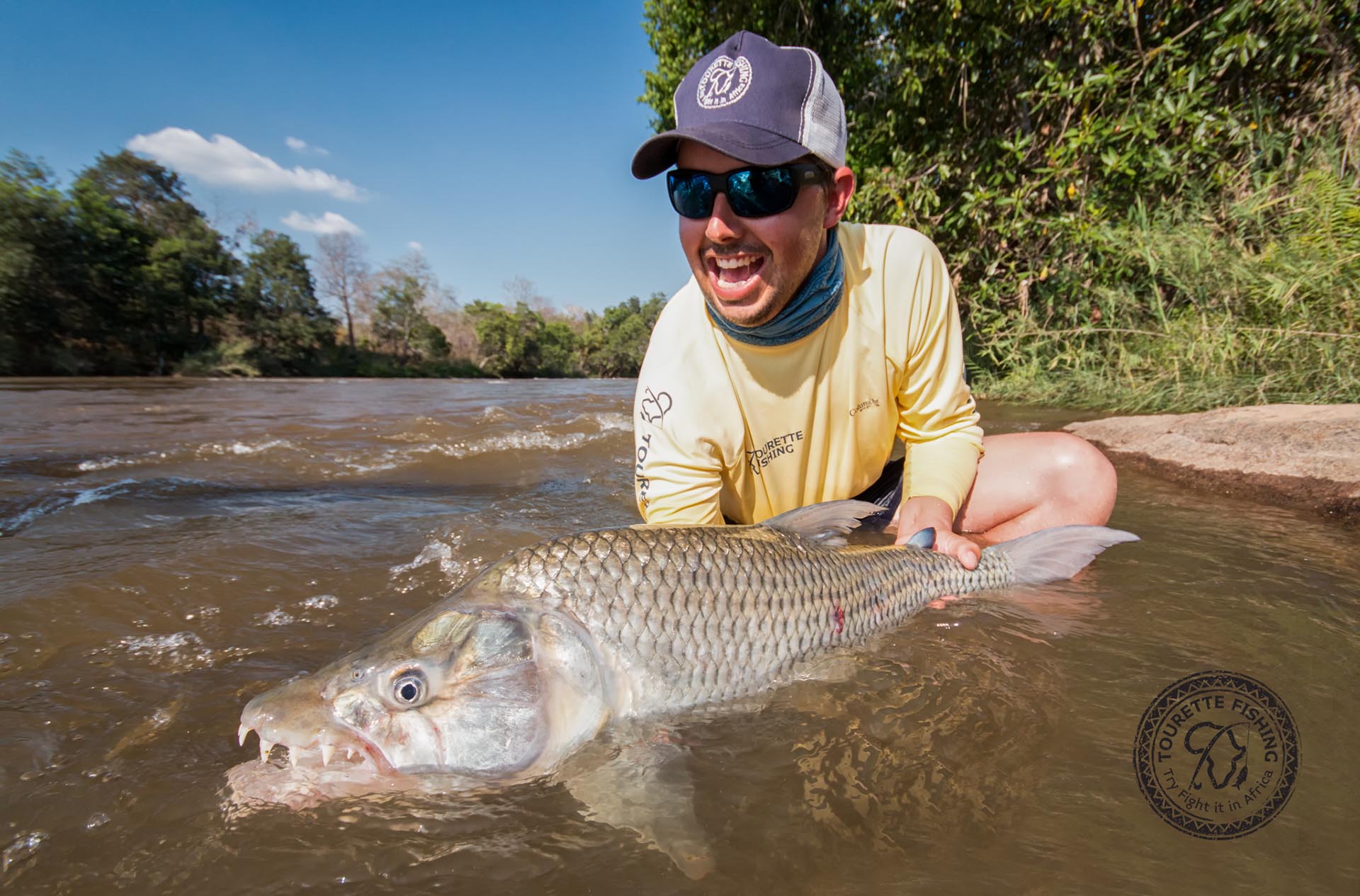 Kindest regards and a big thanks to you all for joining us here in Tanzania. We look forward to having you all back.