The first group of the 2014 season in Tanzania consisted of three friends from Brazil. Celso, Pedro and Aline. Our guests arrived on the 6th of Sept, a late start to the season which generally gets under way in Mid August. Unfortunately late season rains had kept both rivers high and cold. The Mnyera in particular was showing no signs of dropping as is traditionally the case at this time of year. Regardless of the potential difficult fishing conditions, fish we must, and so we took to the water as soon as the guests were settled in.

Day one and two were spent peppering the banks of the Mnyera, and although all our guests made a valiant effort, few fish made it into the boat. After the first day of intermittent drizzle, and a second day of similar conditions, catches were scarce. Celso managed to land 4 fish ranging from 3lbs to 8lbs, which was good going considering the conditions. Apart from Celso’s few fish, and several halfhearted attempts of tigers trying to eat Pedro’s and Alines flies, it was time to face the fact that the Mnyera was not going to improve in the next couple of days, and the seemingly lethargic tiger fish in this river were not getting any closer to the hungry and aggressive tigerfish we all know. The decision to leave the Mnyera and head over to the Ruhudji a day early was made. 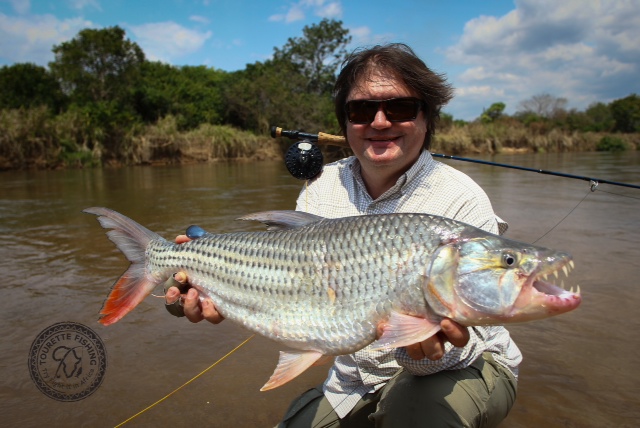 Pedro with a healthy 12lb tigerfish

On departure to the Ruhudji the immediate concern was not of the conditions of the river, but the state of the newly opened road to get us to camp. After the unseasonable rains of the last few weeks our worst fears came to light. The wet black cotton clay sunk its soft claws into the landcruiser bogging us down numerous times. Armed with a machete and axe, we ‘deforested’ the immediate area and pushed on through the black porridge that was once a road beneath the vehicle. After much sweat and hard graft we eventually got the tired but eager guests to the Ruhudji river camp. 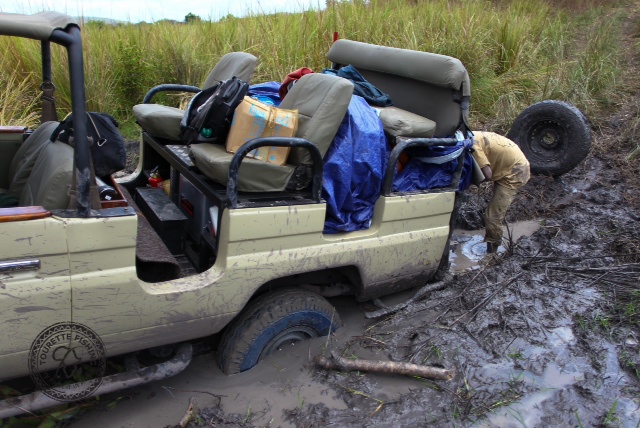 With not much daylight left, the guys (and girl) did well on their first session on the Ruhudji. There were a number of considerably more aggressive hits and Pedro landed a beautiful 12lb fish. The scene was set for a much better 2nd half of the trip.
With a new day and newly formed eagerness we headed to the upper Ruhudji. With true upper Ruhudji form guests were rewarded with some excellent fishing. Celso quickly landed a nice 11lb fish and connected with 5 more fish well over 17lbs, one in particular big fish launching itself right over the front of the boat and was estimated at over 20 lbs. The fishing was back on! 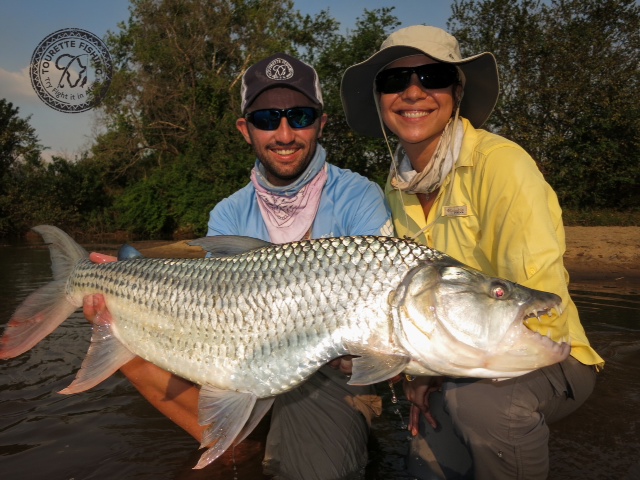 Aline and guide Mark Murray proudly display a massive Tanzania tigerfish. This 18lb fish was taken on the Ruhudji river on a black&white brush fly. On the initial take it ran screaming down stream into the backing in a matter of seconds.

The last two full days of the trip were spent on the middle and lower Ruhudji where some interesting and exciting fishing took place, with many more big fish hook-ups keeping the guys on their toes. Pedro got himself another nice 12 pound fish, and Celso an 11 pounder. The star of the week however was Aline and her “take everything and give nothing back” approach to fighting trophy tigerfish. Aline did superbly well to land a massive 18lb fish, that at first glance looked way over 20lbs. All the tigerfish were in mint condition, fat and healthy, which bodes very well for the rest of the season! 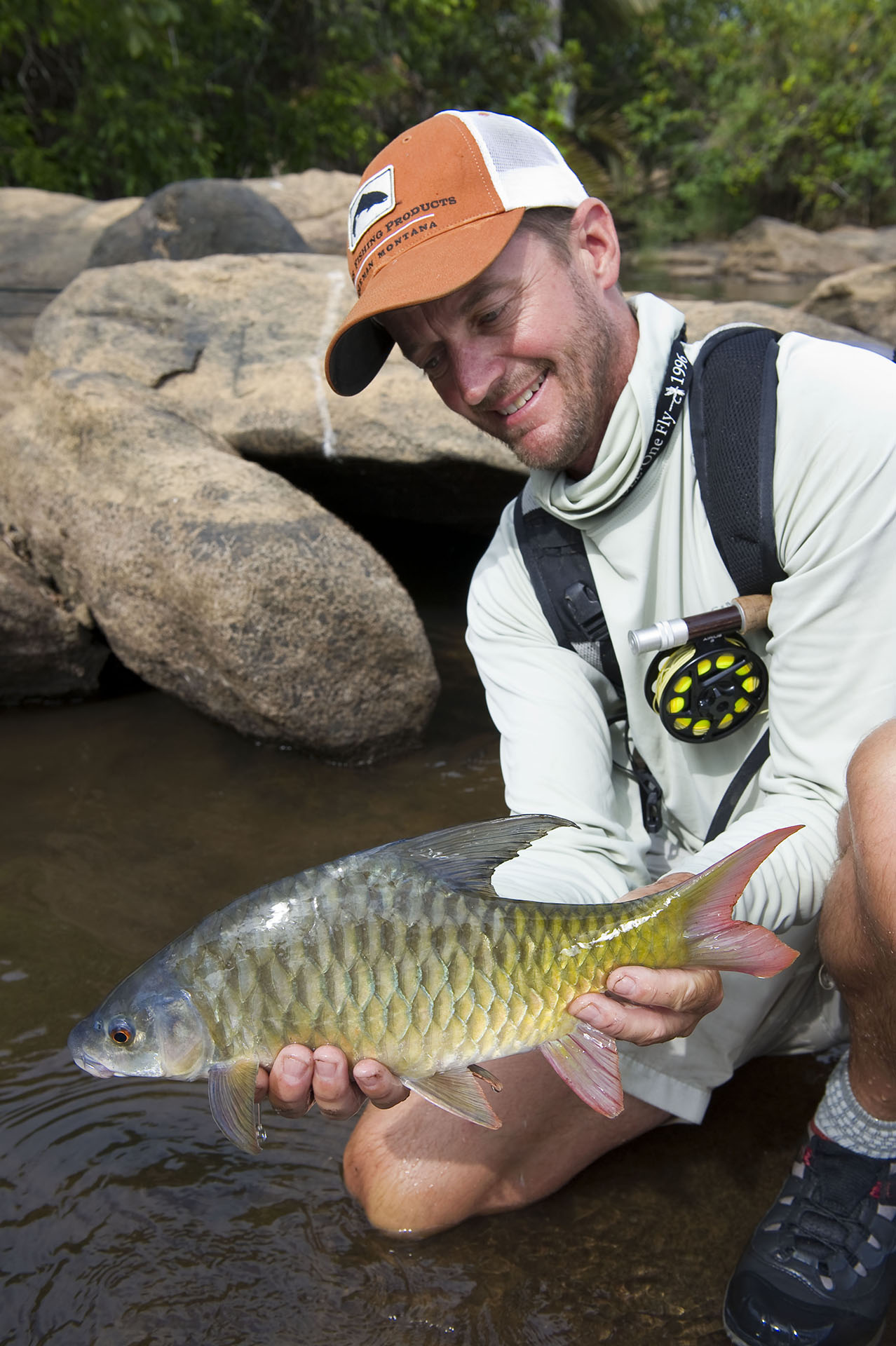 This pic of a black velvet (caught by Jeff Currier 2010) nymphing in the rapids shows the size we have found them up to now.

Last, but not least, one of the highlights of the week came when Celso hooked up with what was thought to be a big tigerfish. However, on its first roll it turned out to be something quite different! Previous seasons in the Kasingo rapids we have experienced some unique fly-fishing for local yellowfish species. One of these species is relatively unknown in the ichthyology field,and has been dubbed the “black velvet” by the guides, due to the beautiful mauve and black tinges on margins of its scales and fins. Originally we thought these fish maxed out at about 3lbs. Celso’s catch has changed everything. After a long and loud fight, Celso landed a huge 9.5lb black velvet which surprisingly ate a blue and black deerhair pattern, thus concluding a challenging yet enjoyable week. 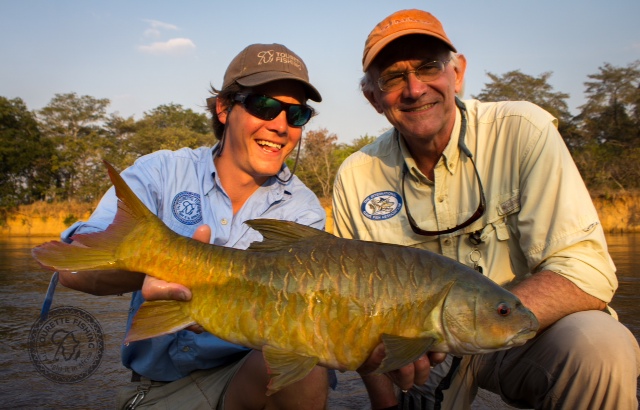 TF Guide Stuart Harley and Celso Spinelli with a 9,5lbs yellowfish taken on a blue & black deerhair pattern while fishing for tigerfish.

A big thanks to Pedro, Aline and Celso for their relentless effort and patience in tough conditions, and well done on all your excellent fish.

Andrew and the TF Guides Crew (Mark, Greg and Stu)