Nothing beats a full fishing camp, and after the last few relatively relaxed weeks, there was a definite buzz about arrival day as we welcomed seven new guests for the fifth installment of the 2016 Tiger season. 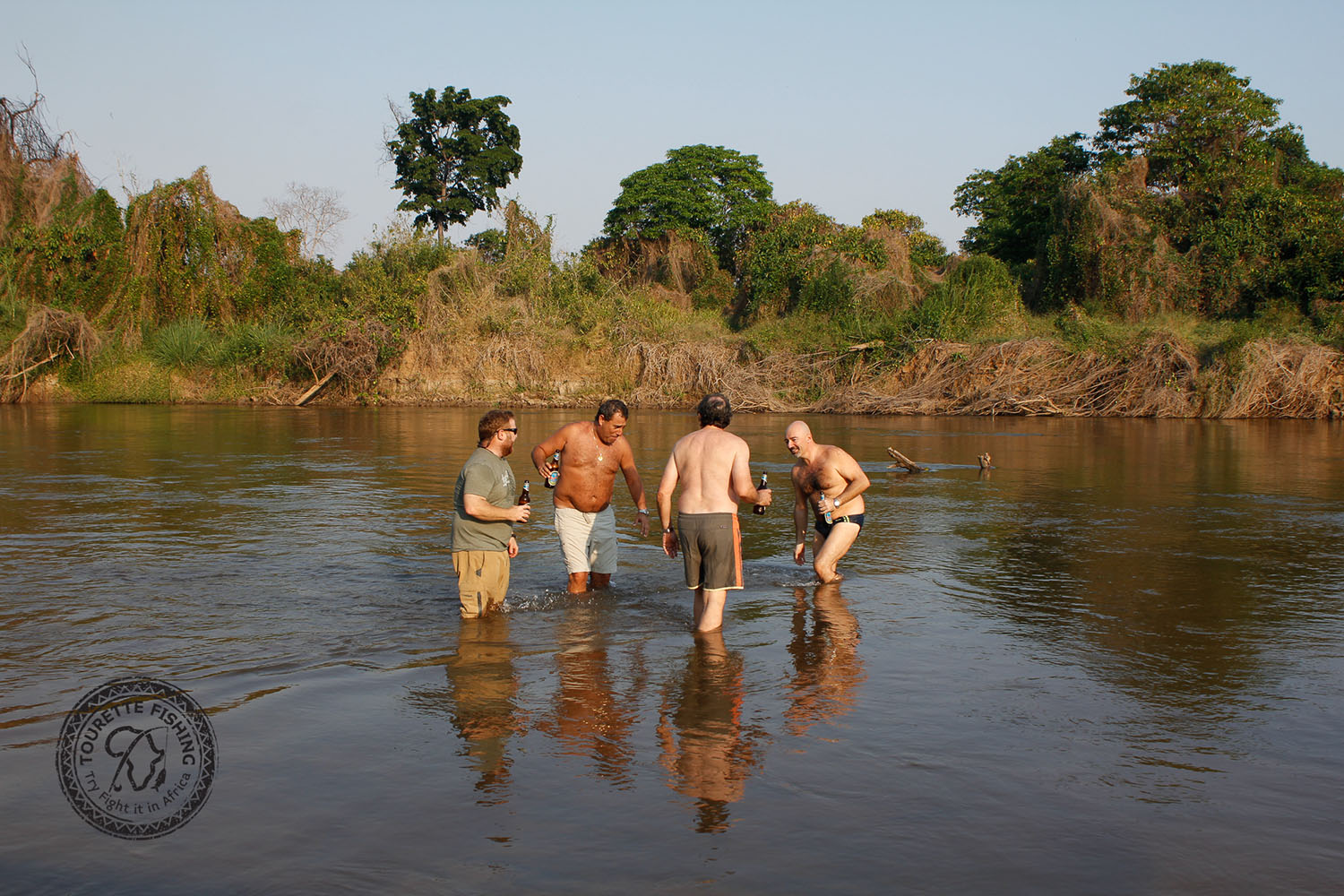 Unwinding after the long journey to the heart of Africa.

As always we were very happy to be seeing Paul Lavins back where he belongs, on his annual quest to add more big tigers to his incredibly impressive and diverse hit list, this time in particular to take up head guide Mark Murray on his promise of an 18 pounder! Argentinean clients have featured sporadically over the past seasons, but enough so to rank them up there with our favourite nationalities, so we were also pretty excited about the group of five, put together by and including Luis Agrest who fished with us two seasons ago. Peter rounded off the group, and immediately slotted into the mix of personalities and nationalities that assembled in Dhala camp to start the week.

Four of the South Americans, Alejandro, Ariel, Kike and the ‘Puma’ headed over to the Ruhudji, and straight into a refreshing wallow on the vast shallow camp sandbar, complete with beers and all. Everyone had travelled a long way to finally get onto the rivers, so it was great for all the guests just to be able to settle into the comfortable camps, and start looking forward to fishing! 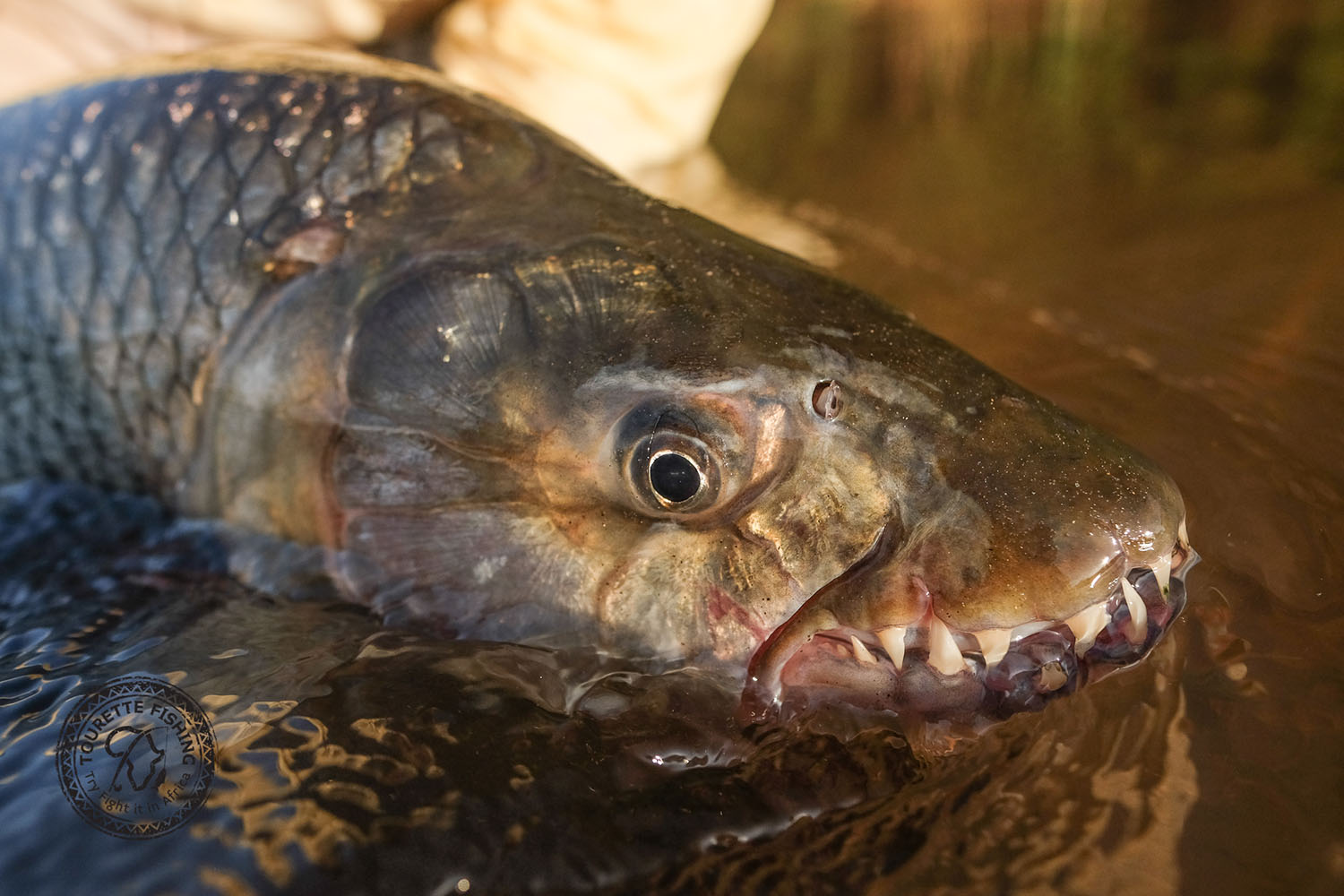 The prized eye of a trophy tigerfish, safely released.

Everyone was straight down to business early on Sunday morning on both rivers, and quite early on it was clear that there was really positive fish movement and action. The Ruhudji guys in particular were moving between hot spots throughout the morning, with a number of stretches providing multiple hits and fish, and some areas a borderline frenzy! There were plenty of smaller fish caught, even more lost, and good numbers of fantastic fighting 10-12 pounders. With action like this, it is usually a matter of time before one of the bigger females amongst the smaller fish is hooked, and all four of the ‘Argies’ were pressed by really big fish. Kike jumped a solid mid teen fish that spat his fly, Puma couldn’t quite set a hook to a strong running deep fish that we never saw, while Ariel had the biggest yank, but it snapped straight through his 45lb wire! 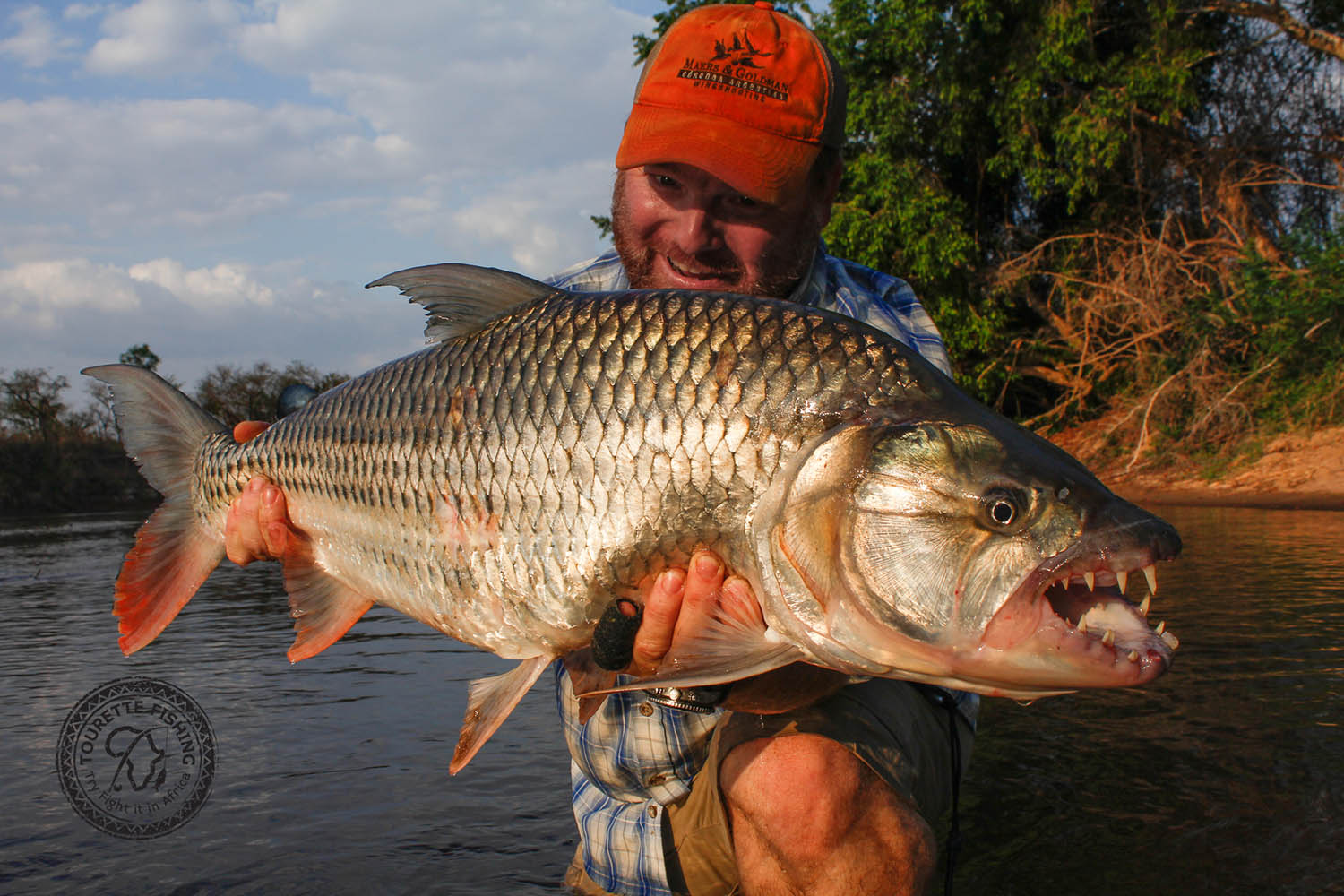 The pattern over the first two days on the Mnyera was different in that there was not wild action, rather short bursts of activity, but the quality of the fish that were out to play was breathtaking. On his previous trip, Luis left it to the last afternoon and the departure day to bag his two biggest fish, but he was much quicker out the blocks this time, adding an 18lb to his two twenties from two years ago. Peter weighed in with a 14lb, and a 15lb that he had no right to land! It blasted him straight into some heavy structure, but he’d done such a good job setting the hook that after close on 15 minutes of intensive follow up work from guide Mark tracking the tangled line, the fish was still on the end, and they were able to boat it! 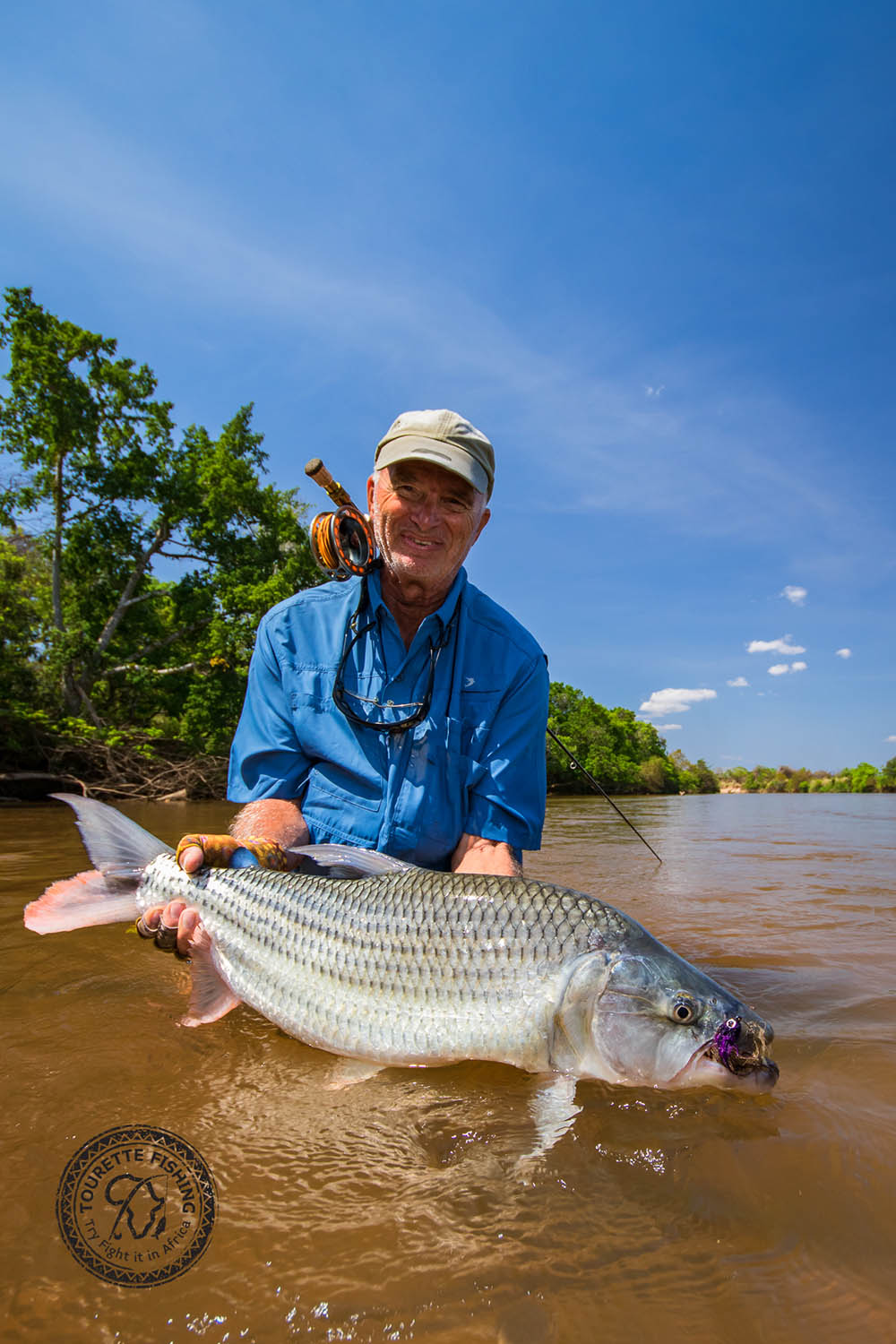 Day two calmed down somewhat on the Ruhudji, and after a busy session early on at the Riffles it was actually really quiet. Fishing the middle beat, the guys took a really chilled out mid morning break in camp while we dealt with an engine malfunction issue, and so by the time we went out again they were raring to go. After the activity the previous day it was hard to believe that it could be completely dead, and with conditions perfect, the late evening session again caught fire. Alejandro and Ariel managed a solid double digit double up, while Kike ‘the Iceman’ pulled out a 14lb, 15lb and 13lb fish in three consecutive casts , and the guys had to be dragged back in to camp in very last light! Again slightly different on the Mnyera, but equally impressive, the Lower section below camp came alive with big fish, and even writing it down now, it is hard to believe! Luis once again breached the 20lb mark, Peter again raised his bar with a brute of an 18lb fish, but the man of the moment was the dark horse Paul, who in 5 previous trips had peaked out at a very respectable 16lb. He landed a 14lb, 16lb and skipped the promised 18lb and went straight to 21lb! An incredible effort all round, and it was great that everyone cashed in on such good opportunities. 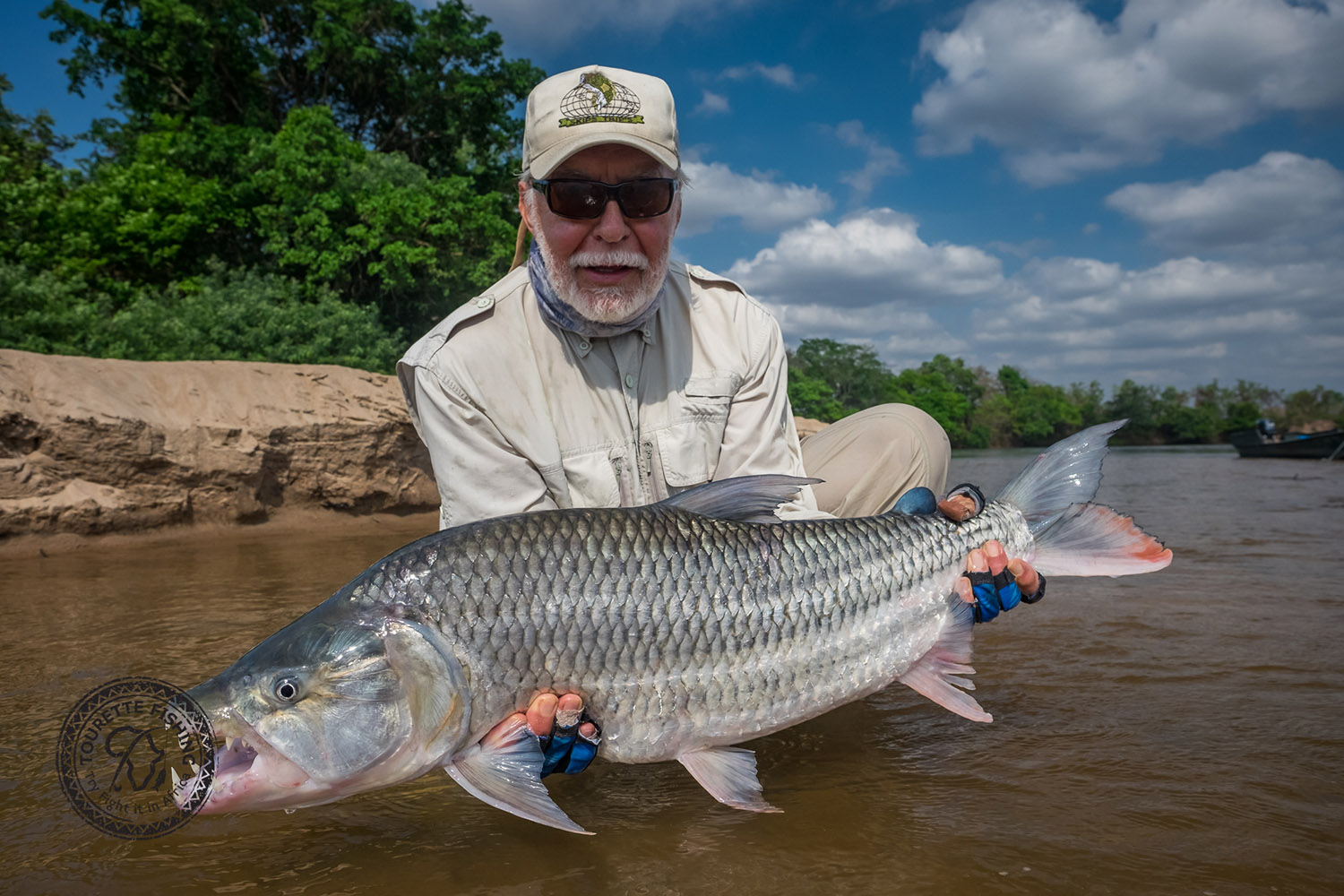 Paul’s experience really paid off. He is an inspiration to the guides team. If we can be fishing half as well as Paul at 80+ years of age, we will be more than happy!

A long boat ride up to the Upper Ruhudji probably meant that we missed the early bite, but things picked up throughout the morning, and just before midday, the 6-12lb fish were rolling in again, making for great fishing, as they all seemed to be in superb condition and the multiple line burns and finger tapes testified to this! Kasingo on the Mnyera also recorded a very slow morning with cloud and wind probably playing their part, but Paul was at it again this time with an 11lb fish. Similar to the Ruhudji, the switch was flicked in the afternoon, and Double Up saw everyone get roasted by at least one big fish in a power hour session! Plenty to talk about when the guests all met up back at Dhala camp on the eve of the mid week changeover, and I think both parties were excited about what lay ahead of them! 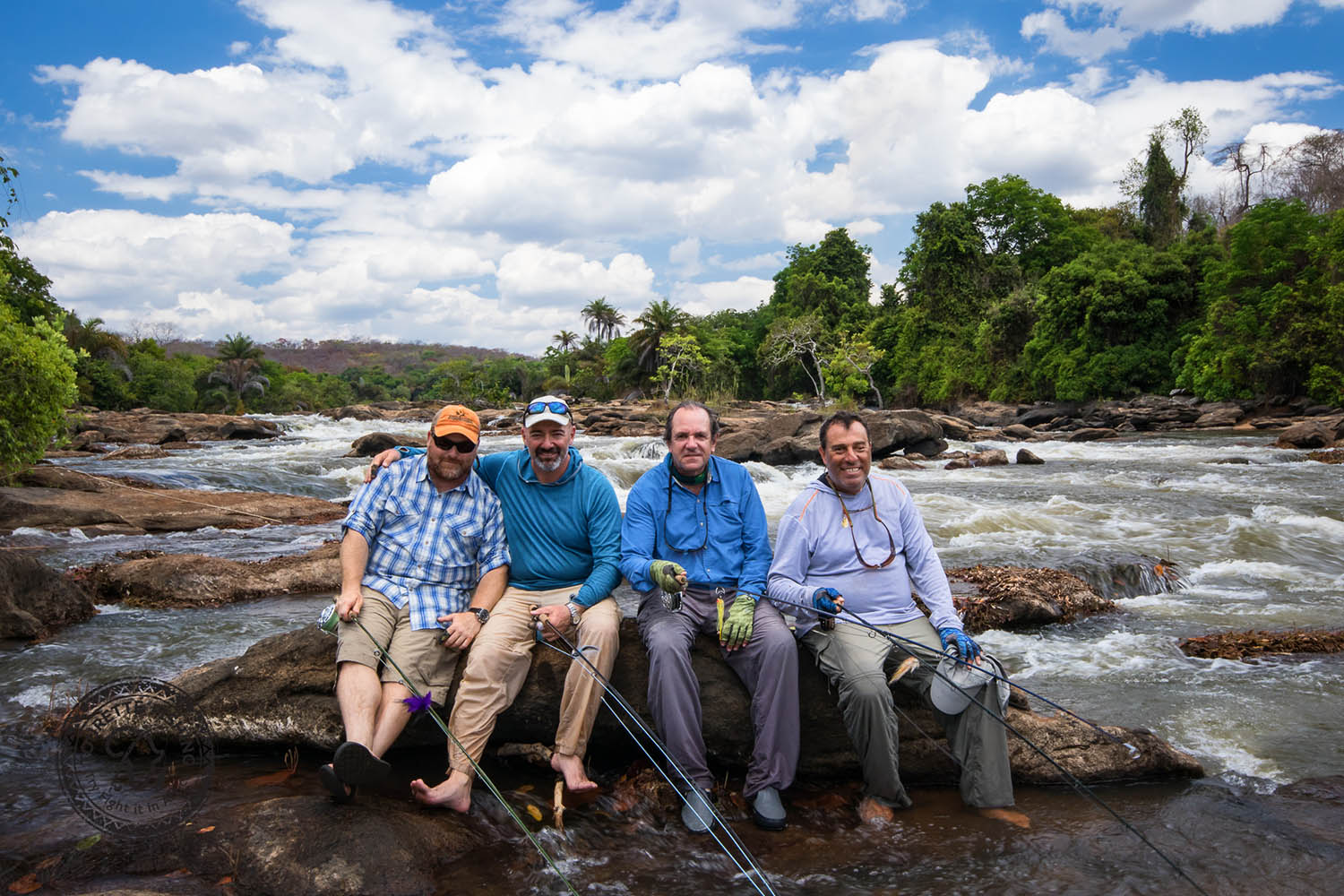 The Argies enjoying a break at Kasingo Rapids

Typical of a really aggressive feeding period is a period of calm in the aftermath, and this was evident on the Ruhudji which seemed to be a half a day ahead of the Mnyera in terms of feeding patterns. Luis and Peter covered a lot of water and had to work very hard for a 6 and 9lb fish, before finally connecting with something really significant late in the day at ‘Bob’s Catfish Cookout’ far down the lower beat. Lagging behind, the Mnyera was still in feeding mode, and Alejandro had his wire snapped, a hook opened and another two fish come unbuttoned within half an hour of starting in the Kasingo rocks! Ariel stepped up and boated his largest to date with a hefty 15lb, while Puma and Kike also felt out a few. Alejandro finally turned his luck with his first cast after lunch, latching onto a powerhouse that tore his dry 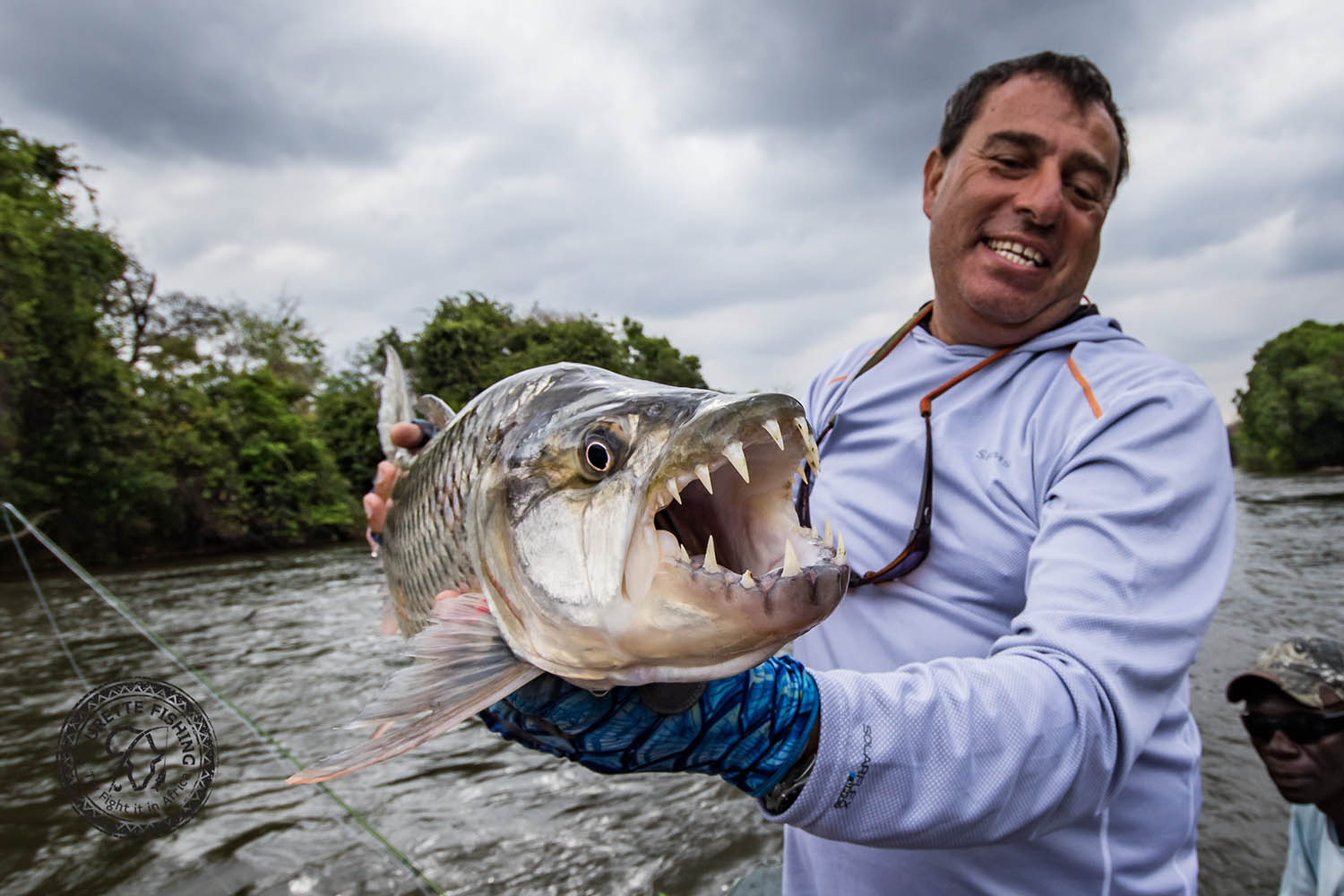 fly line through his fingers! He wore the pain though and hung on to claim a fantastic 18lb fish that put him right amongst the big players! Just when he thought his luck might have changed, he had another massive fish snap his leader, and while we quickly patched him up, Ariel the unassuming assassin stepped up and plugged into a belter of his own. Maintaining his great conversion rate, he fought it like a champion, and was soon cradling a 20lb of his own, an incredible fish and a special memory for all of us! Puma and Kike rounded off a stellar day of big game tiger fishing by bagging a 15lb each, making for an awesome team tally. 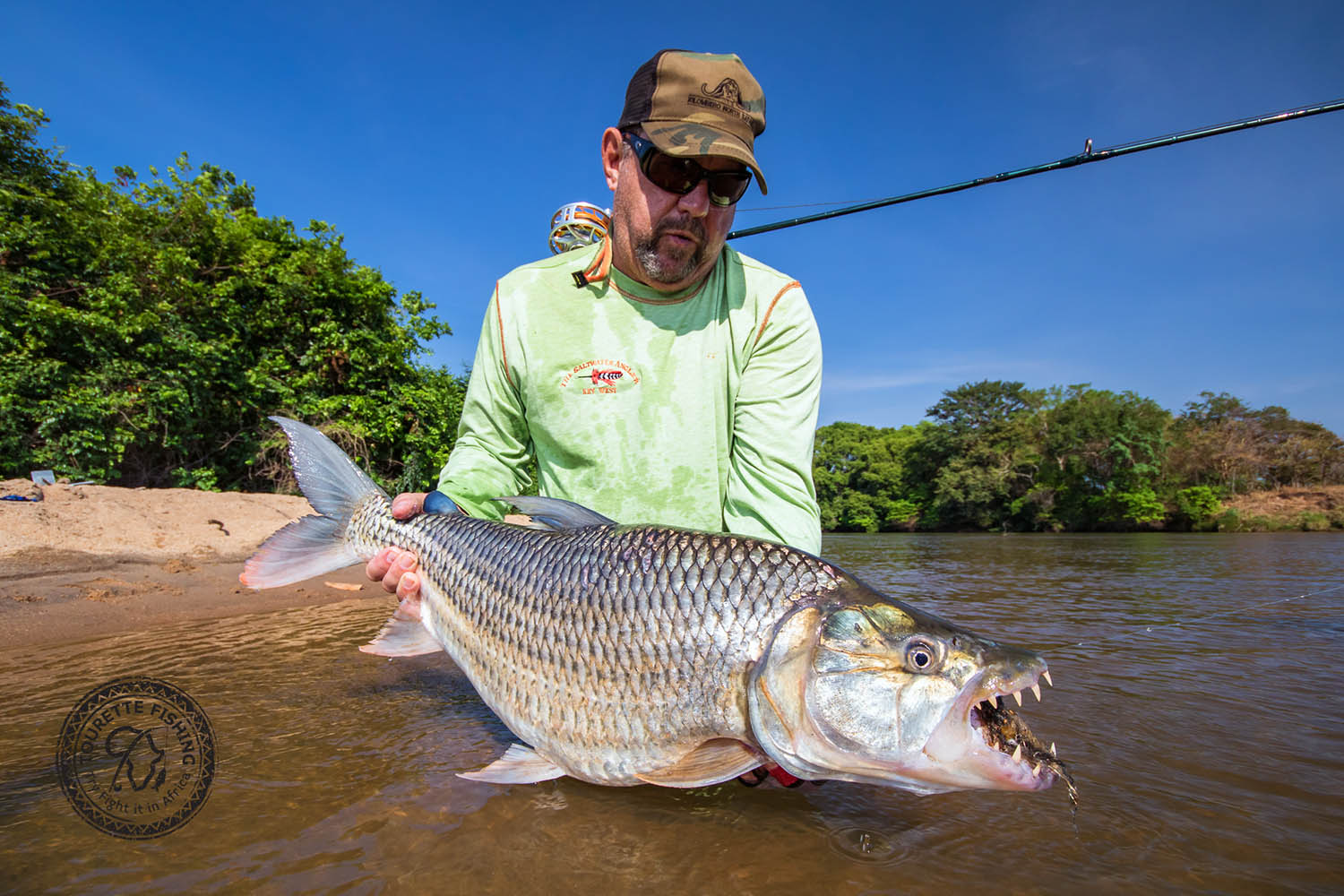 The feeding lull eventually caught up with the Mnyera, and the fishing was much more circumspect on the middle beat. Kike cashed in on the last real take by claiming an early morning 14lb to add to his swelling mid teen collection, but that was about it for a long few hours until the ‘Puma’ stepped up and bagged an 11lb and 6lb just before lunch. The afternoon failed to deliver on this promising stint though, and after a long fishless afternoon the guys were pretty worn out. The Ruhudji was in the midst of a feeding hangover, and takes were few and far between. Paul flew the flag with another proper fish, this one of 19lb, as he continued to re write the blue print for Tanzanian tiger fishing!

The fact that an 11, 13 and 8lb fish came out on the last day on the Ruhudji and it was considered to be ‘almost dead’ sheds some light on the kind of fishing we had enjoyed this week. Although Kasingo on the Mnyera was also a shadow of its potential self, we still had a supreme day there with some classic highlights. Alejandro was on form again and pilfered a beautiful 12lb fish on a popper out of a tiny braid of rapids, while Ariel put in a good shift on the Yellowfish front, sighting plenty and hooking up to one. This was a good way for him to deal with the heartache of losing a lump of a fish early morning right at the boat as the Tiemco hook broke as we tried to net it! Alejandro rounded things off perfectly by luring in the sole feeding fish at Double up late in the evening, after raising it twice on the popper. 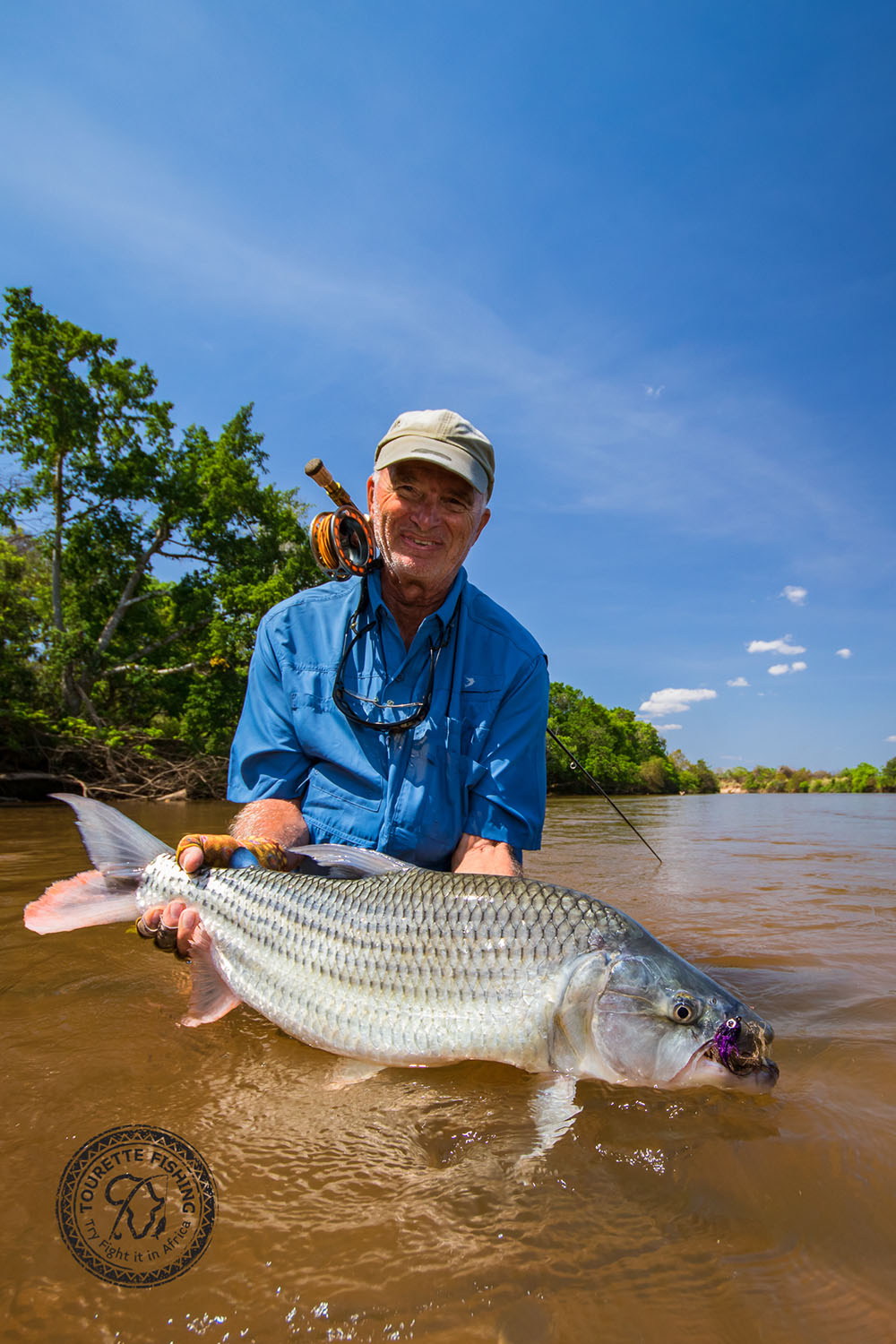 Stats will only ever tell a fraction of any fishing trip, and you only have to glance at this week’s to realize that it was something truly special! Wild fishing with great characters, it all came together, and we look forward to taking this momentum into the last two weeks of the season!