After a last minute cancellation on arrival day of two due guests, Steve and Vyvyen found themselves with the same happy conundrum that faced our previous guests, with one difference. Not only did they have both rivers and camps to themselves for the week, they also had four guides at their service, as the mid season reinforcements arrived in the form of veteran Stuart and rookie Keegan. 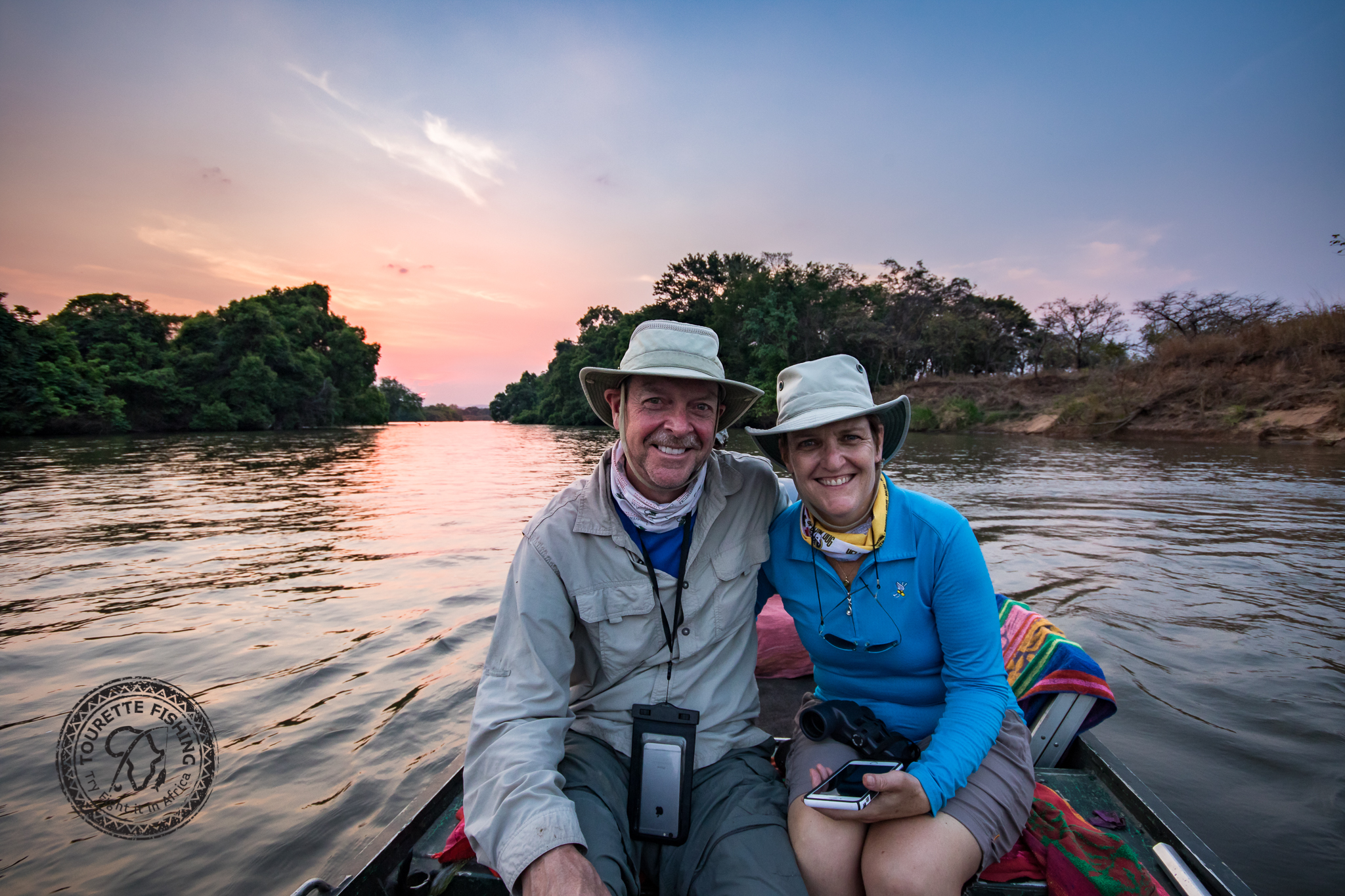 Relaxed, always game for anything, and all round good people, we were always going to have a good time with Steve and Vyven, and we really looked forward to the rare opportunity to spend some time on some activities that are sometimes somewhat sidelined in the all consuming pursuit of tigerfish! For the guides this meant a golden opportunity to get some footage and photographs of the amazing arena we get to work in, but hardly have the time to document, while for our open minded guests it meant a chance to really experience the Tanzanian wilderness.

As adventurous as they are, Steve and Vyven are late comers to the fly fishing world, so for the first afternoon it was decided that they would go out and get a feel for the rigs, boats and in general what would be in store for them over the week. They quickly got the hang of water loading and casting, and as soon as he had mastered mending, Steve wasted no time in hooking up to a hippo that had been lurking around the hole they were fishing! It was an inauspicious start to his tiger fishing career, but a great story and an interesting way to kick off the week! 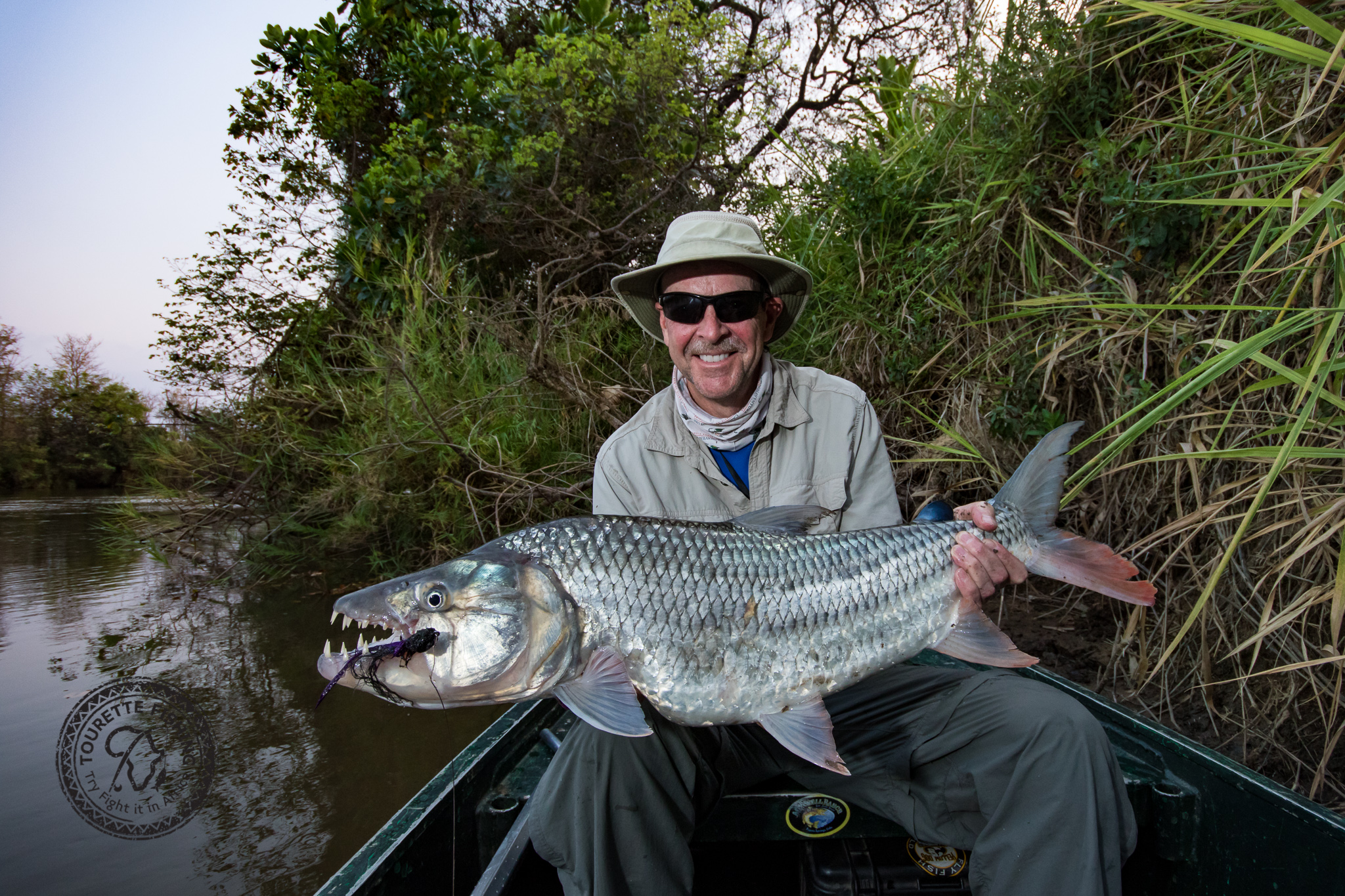 Steve’s 16lb tigerfish landed at Boko. What a fish!

Mark took the couple for a full day on the upper Mnyera on Sunday to show them some of his notorious stomping grounds, and the Burns’ were able to get into the groove of extended periods of engaging fly fishing. Again the upper beat was dormant, and aside from a few tugs here and there, there was not a lot to report at lunch time apart from more improvement from the fisher folk. Steve finally got on the board just after lunch as he got amongst some smaller fish which were really admired and appreciated, and great experience for the larger ones that would come. This turned out to be sooner than later, and when Steve went tight at Boko, within sight of the hippo pod, the events of the previous day must have crossed his mind! Luckily Steve held his nerve, and his fly line long enough to set the hook and fight and land a stunning 16lb torpedo! This is a spectacular fish for anyone, and very special for Steve, who had set himself up very nicely for the rest of the week.

The Middle beat also proved to be slow going in the morning, but once again a lone good chance presented itself, and Steve converted it to add a 13lb fish to his fledgling tiger roster. Vyvyen was still creating chances every session and although hadn’t landed one yet, was definitely honing in the tigers! The Gin and tonic sundowners at Ndolo pan, surrounded by bush and game and a belting sunset was not a bad way to round off a Monday! 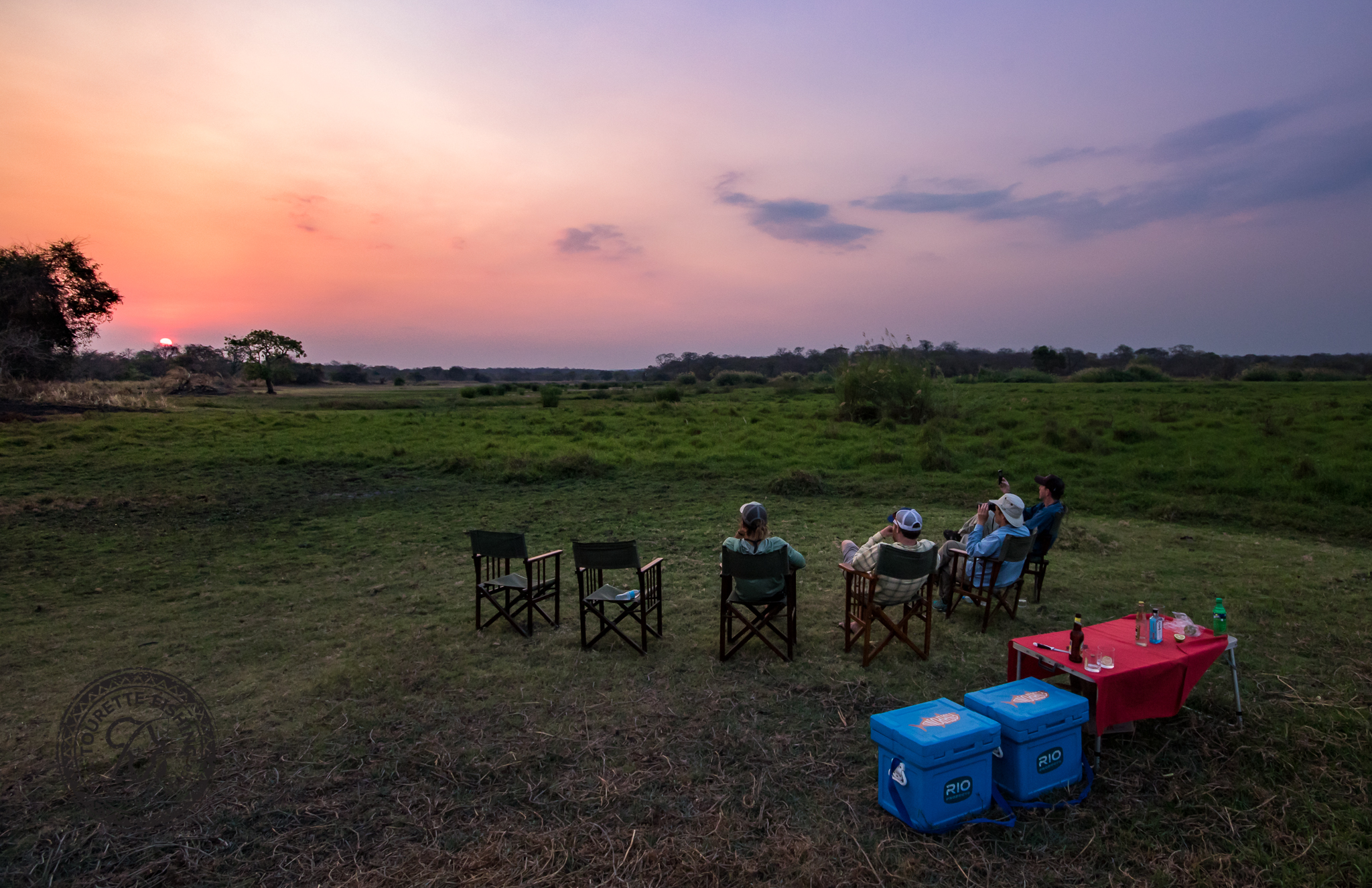 The third day on the Mnyera was an absolute gem, and even the experienced guides crew rated it as one of the best of our time. The funny thing about it was that very few fish were caught, but it was much more about the time spent really enjoying the Kasingo rapids on a stunning day, working pools for yellowfish, swimming, photographing , flying the drone, exploring and just taking it all in. Throw in a shady lunch and some hammocks into the mix, and it was about as good as could get! A day fly fishing and exploring the Kasingo Rapids

As always with the Tanzania Tigerfishing package, just when you think you have seen and done it all, you get to go and experience an entirely new camp and river, and on Wednesday morning the whole crew set off for the Ruhudji fly camp. The now avid tigerfishing duo were soon on the boats and plying the lower beat, and it was a measure of how far they had come in such a short time that they each boated four fish, with Vyvyen coming to the party in a big way! The pair were now making much better use of any chances coming their way, and the inevitable result was that they were getting more and more into the whole ‘Tigers on fly’ saga! 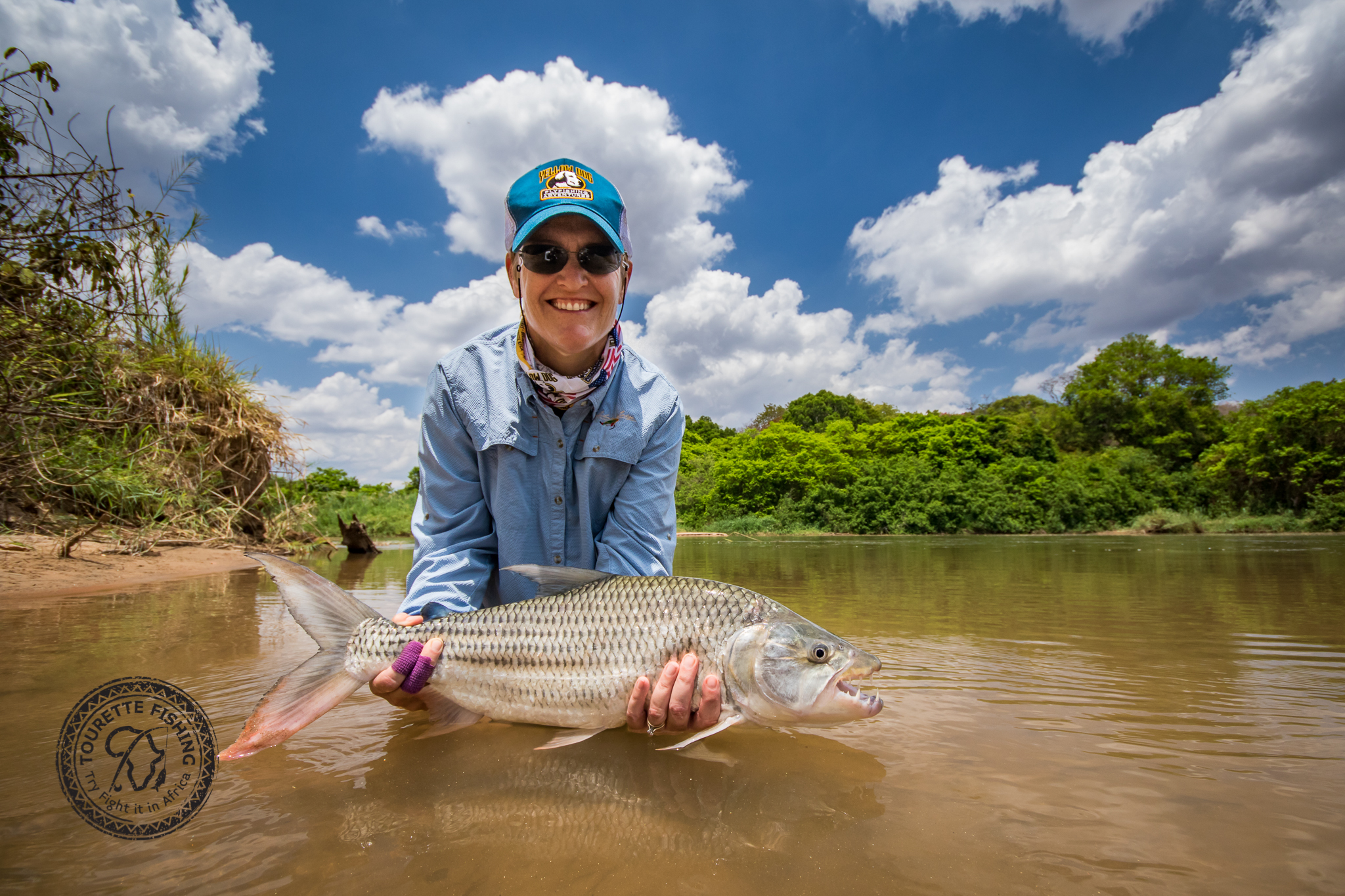 Vyv really getting he hang of fly fishing for tigerfish

Just around the corner from any good tigerfishing day is a tough one, and for first timers like Steve and Vyvyen, the fall was always going to be felt more acutely. It started as a typically slower morning session on the upper beat, but by the end of the afternoon it had become a full on soul searching episode as our guests tried to understand how no less than five hooked 17lb+ fish had eluded them! It seemed that the magic of the day before, when they could do no wrong, had worn off, and landing any fish was an impossible ask. Showing true tiger fishing grit though, they were not in the least deterred and were more determined than ever to improve their technique and ‘get back on the horse!’

The last day of the week was spent around the middle beat, but as with every day it was not going to be merited on anything to do with fish, but was already logged as a great day just for the fact that we were all out on the river enjoying ourselves. As it was, the fishing was sluggish, with some great early action at Riffles ensuring that both Steve and Vyv had some tigerfish interaction, before the classic mid morning lull. Early afternoon straight after lunch saw Vyvyen step up again and nail two fish in successive casts, but the rest of the afternoon slipped away from us, and too soon it was time to head back and board the vehicle heading back to the Mnyera. 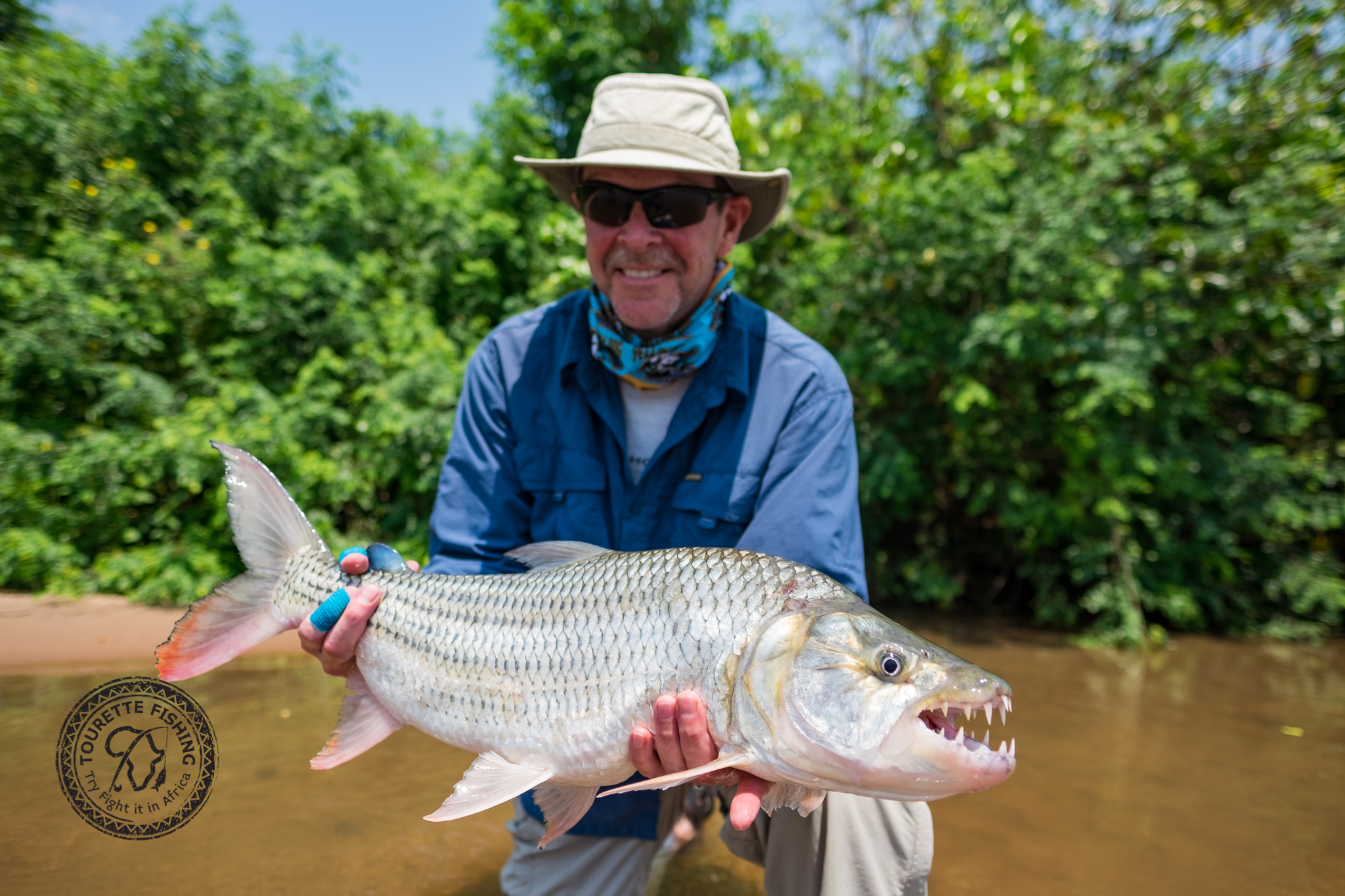 Steve making it count on the Ruhudji River

This week stands out for so many reasons, but mainly because it was such a sharp reminder for us as guides about the place we work in, as we were able to step back for a bit and really see it for the paradise that it is, and to be able to enjoy it with great people. They not only caught plenty of great fish, but their keenness saw them get a whole lot more out of the trip. To have notched up over 70 bird species as a sideline enterprise was probably the best example of this! As it was, no two weeks are the same here, and this was another gem, but the focus has already shifted to the last three fully booked weeks of the season which will no doubt cough up a whole lot more interesting times!