30km of Mnyera River and about 60km of Ruhudji were the exclusive property of just two anglers that made up the third week of the 2016 season. It was great to be able to catch up again with Tim who had fished with us two years ago, and also a pleasure to welcome Allan, who is in the midst of a fishing and travel bonanza, and was making his first foray into the world of flyfishing. 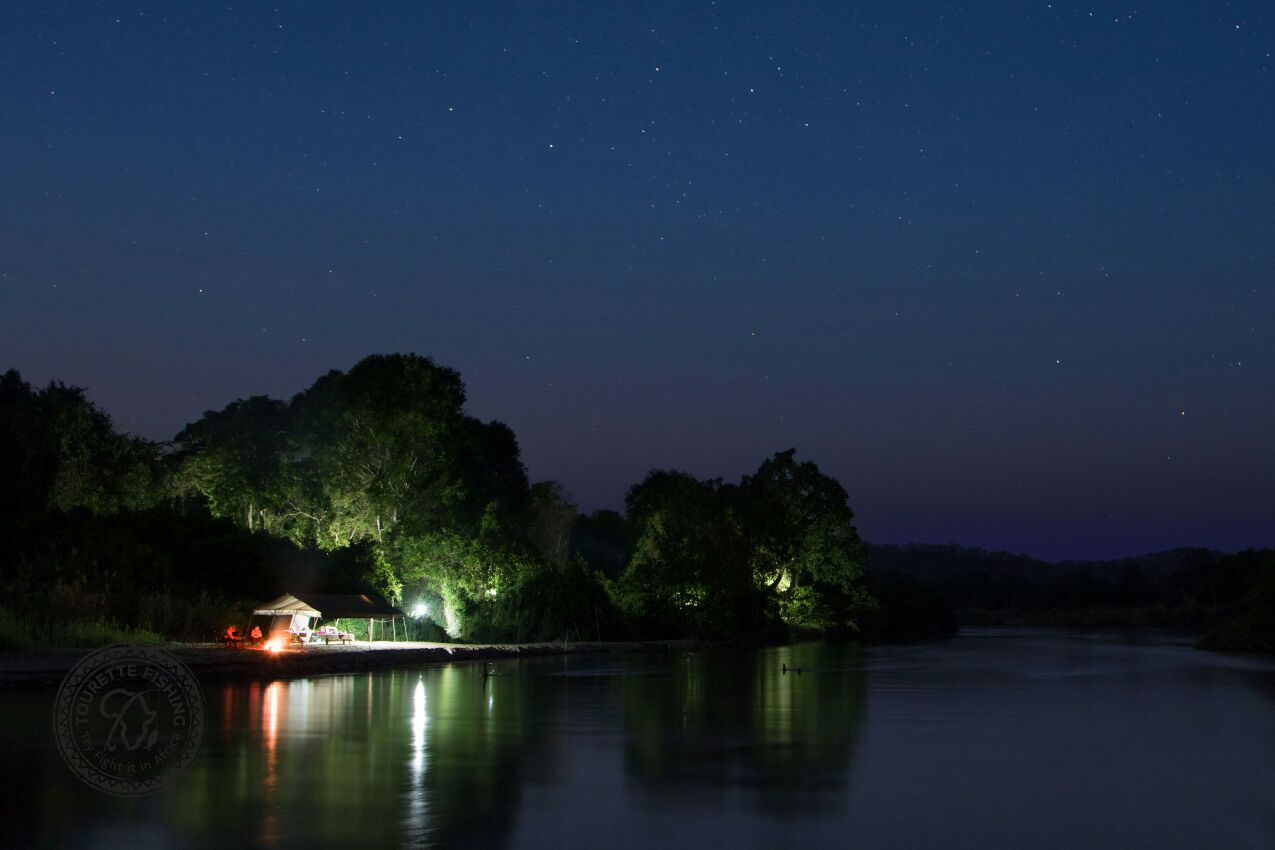 Samaki Camp on the Ruhudji River is arguably one of the most remote fly fishing camps on the planet.

With both camps, both guides and all beats to themselves, pressure was never going to be a problem and the guides and guests soon slipped into a relaxed rhythm of going out every day just to be on the rivers and see what fish would or wouldn’t come out! Allan, an experienced lure fisherman, had plenty to keep him occupied anyway with getting to grips with fly casting a 9wt and managing the a sink tip line, and Tim is one of the best exponents of just enjoying quality time on the river with a cigar and letting the fishing look after itself. This had worked very well for him on his first trip here, and having a 21lb and 19lb fish to his name, he would have been crazy to change anything! 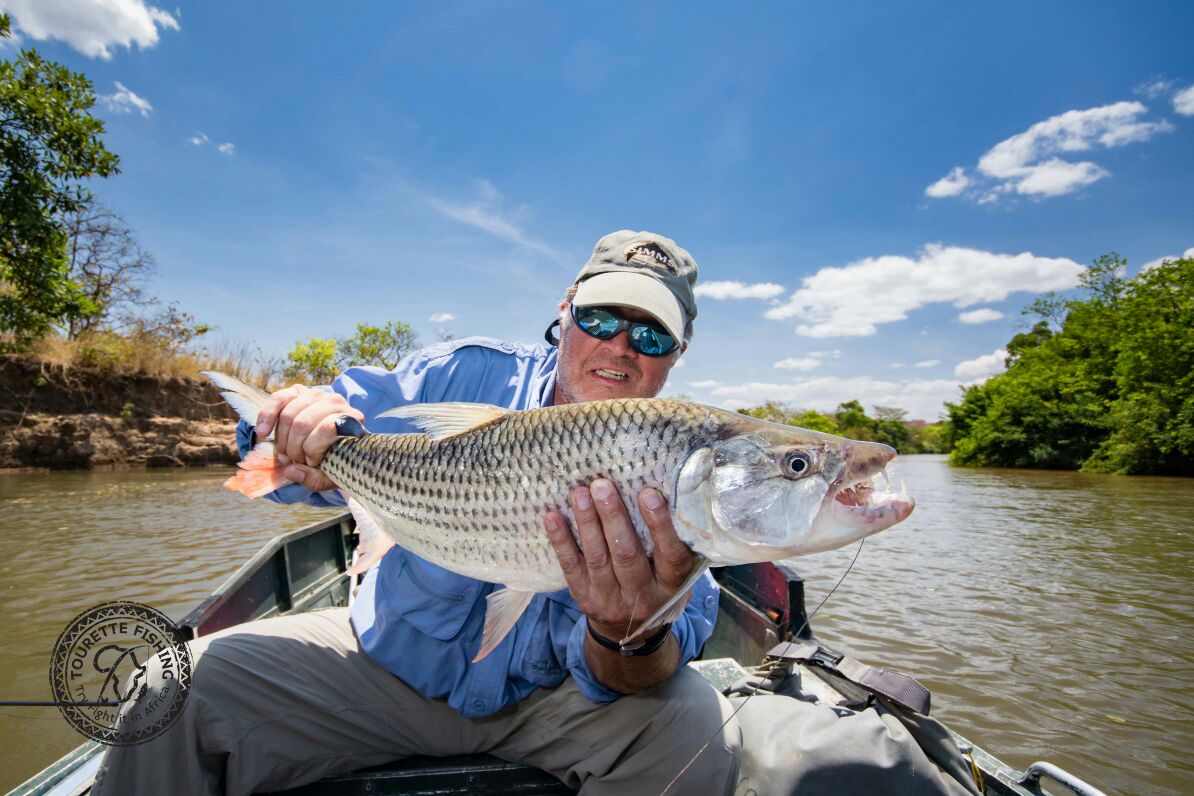 As with the last group, we headed over to the Ruhudji on changeover day, after a welcome lunch and siesta at Dhala camp on the Mnyera. The transfer drive between camps is always eventful in some way, and this was no different, with multiple game sightings (including elephants) plus a quick puncture tire change to keep us occupied! We still arrived in good time to make the best use of the beautiful evening light with some drinks on the sand bar while rigging up the rods. 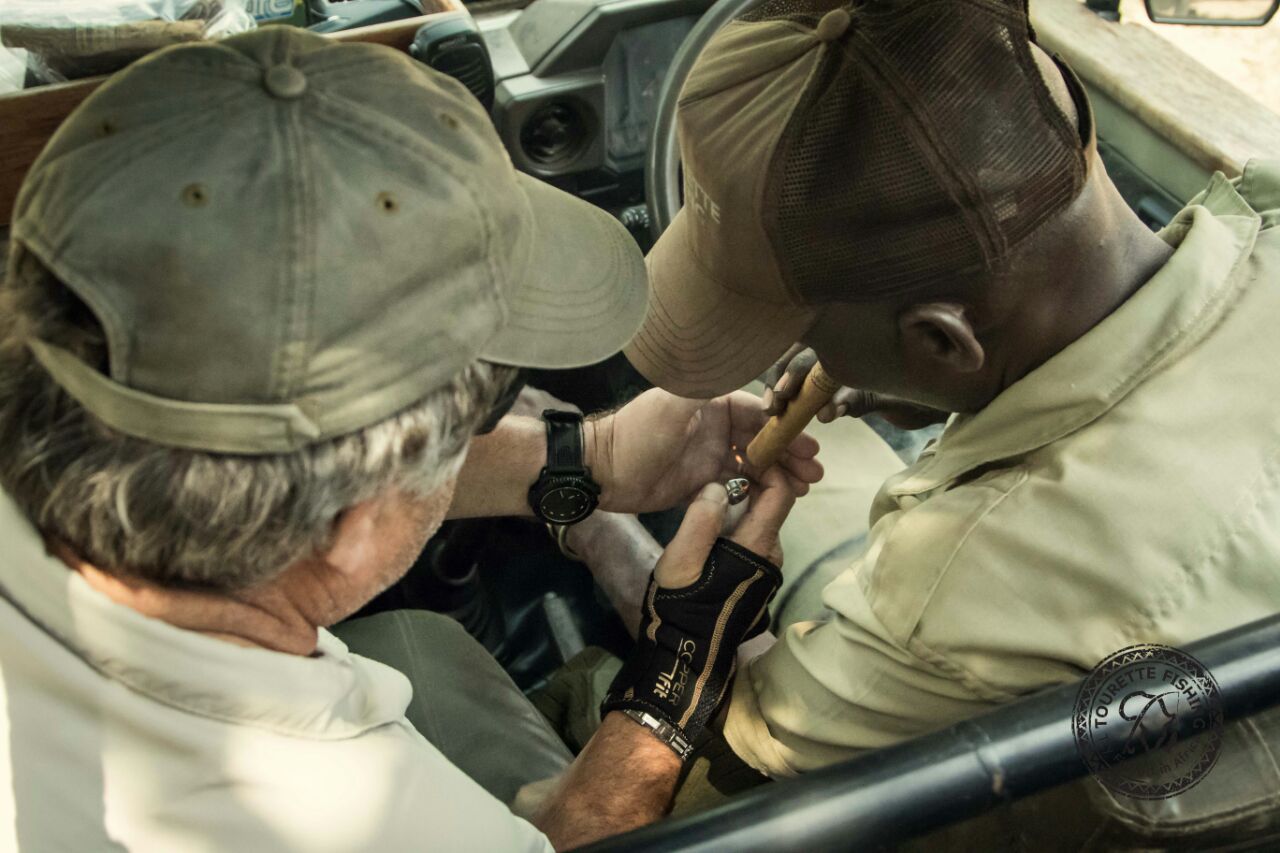 Sharing cigars on the game drive over to the Ruhudji River

Mark and the gents tackled the Lower Ruhudji first up, and did so with high energy and enthusiasm levels. A pleasure to guide, the guys stuck closely to Mark’s instructions and advice, and to end the day with a 10lb fish each was a fantastic, especially for Alan on his first fly fishing outing! He also had a taste of a much bigger fish with one of the last casts, but maybe a bit jaded at the end of a long hot day, he was unable to convert it. Positive signs though for the rest of the week! 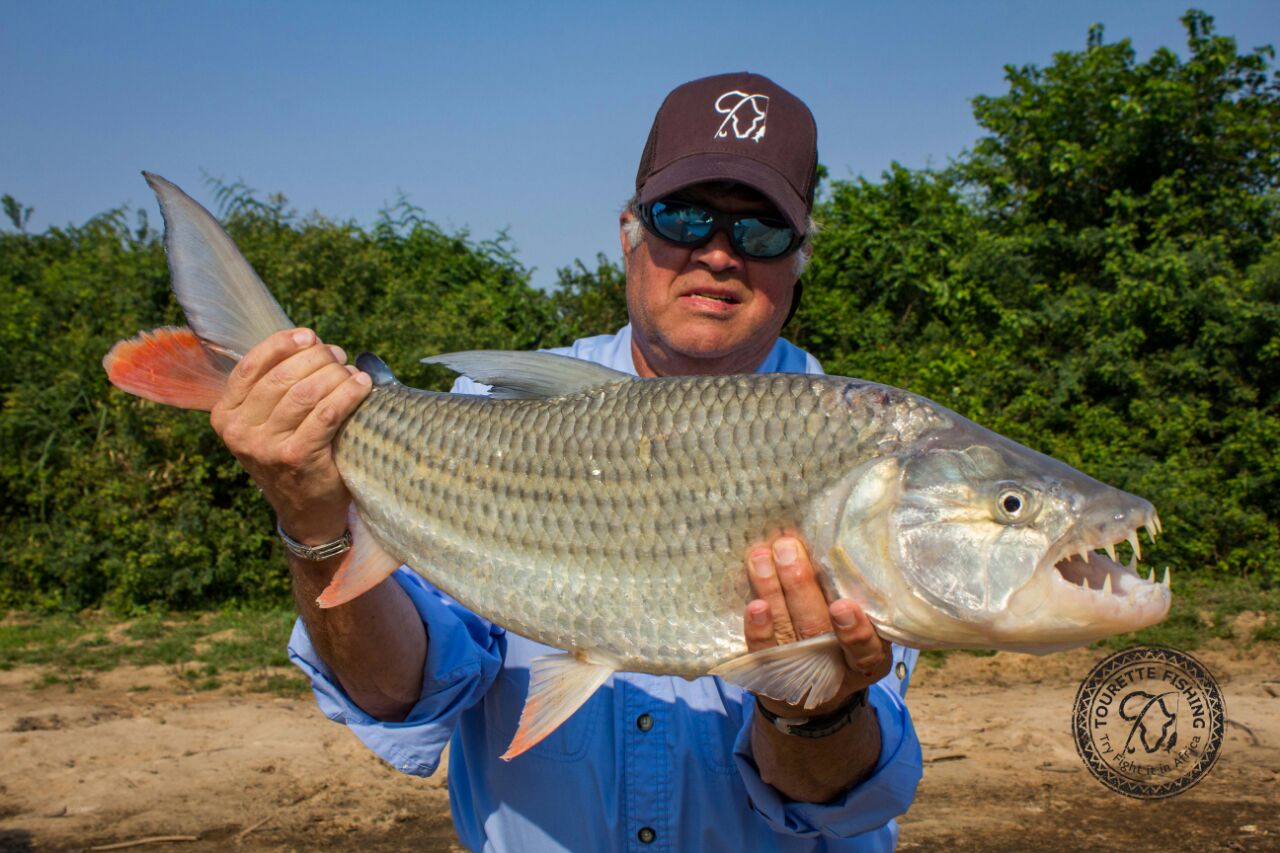 The day spent on the upper beat was arduous fishing, and all the action was condensed into a handful of spots over some very narrow time windows. This can make for frustrating fishing if the few opportunities are not converted, and all you are left with are long quiet periods to deal with voices in your head about how you let the fish get away! Luckily, although hard going, we did at least boat a couple of smaller fish, and in a late charge, Tim hooked up to decent fish four times late in the afternoon but it was that kind of day that all four found a way to escape! 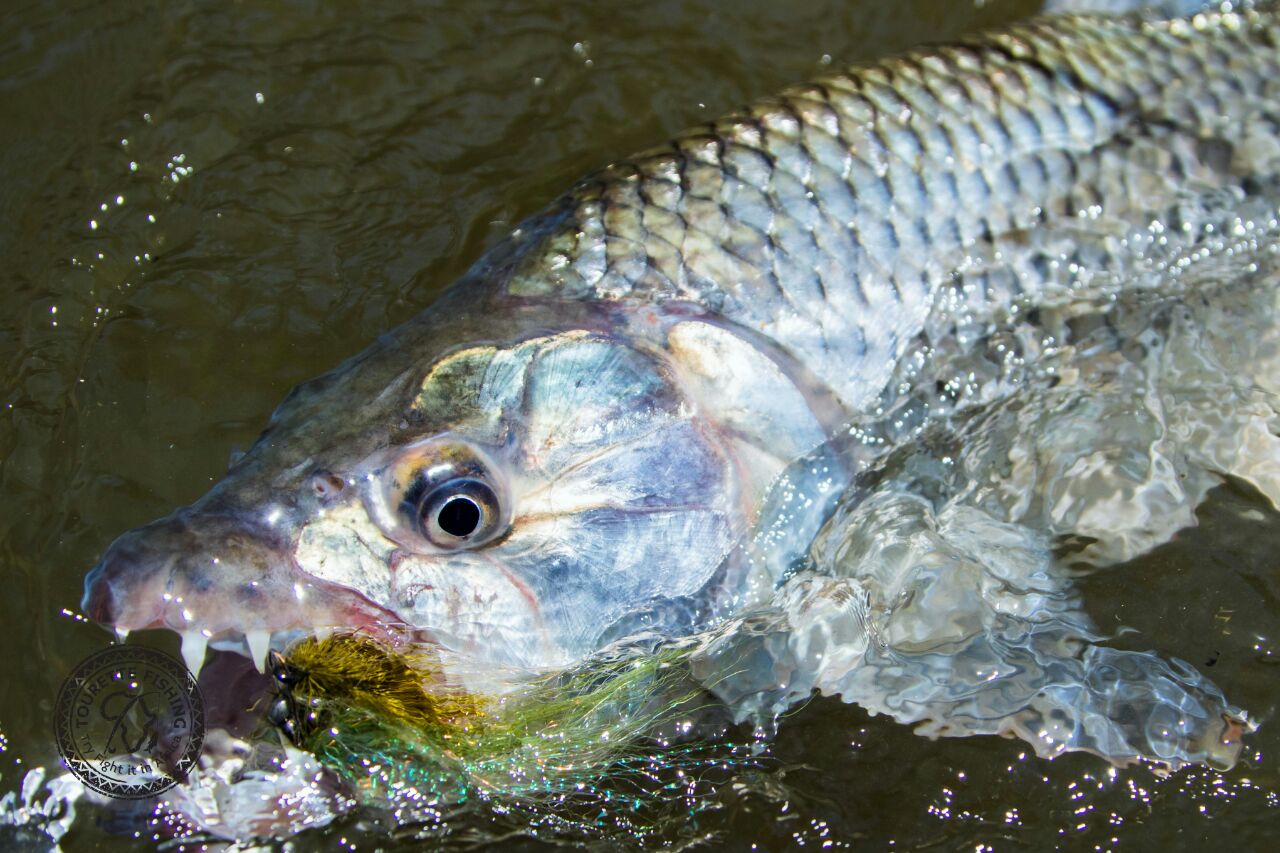 Tanzania tigerfish are not averse to eating big flies

By the third day, we were experiencing good clear weather and the temperature was really cranking up nicely, but the wind was gusting throughout the morning and really putting a spanner in the fishing works. Close to perfect conditions, as the rivers are looking really good, but it was really unforgiving fishing as the Tigers just wouldn’t feed on any terms than their own. We were off the river and well on our way back to the Mnyera in the afternoon by the time things settled down, and it was a good reminder of all it would take would be a small respite in the weather, and we could be ‘back to business!’ 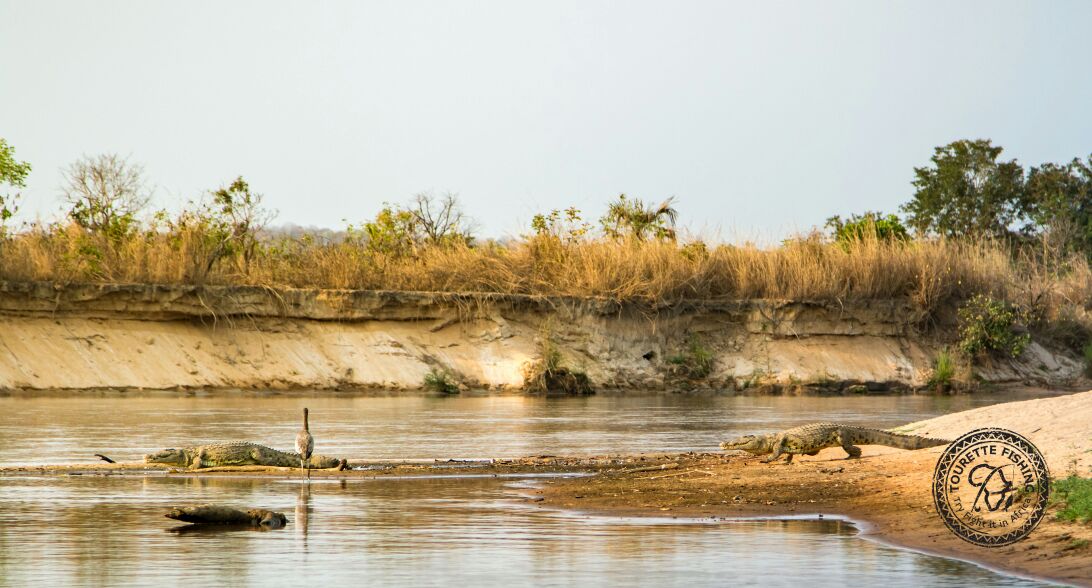 The hot, still late afternoons have been a bit more of a feature on the Mnyera, and we decided we would have to try and take full advantage of these to try and turn the week around. Tim and Allan still put in good morning shifts, and picked up some smaller fish and recorded some pulls in good water, but the tactic of having lunch in camp and resting up during the breezy midday and early afternoon, before launching an intensive offense in the late afternoon became a feature of the last few days on the Mnyera. The river never feels more fishy or alive at this time when the conditions are right, and you can almost feel the energy all around, as the birds and animals seem to be affected, and the water also seems to be alive with moving fish. Each afternoon we had several good pulls from notorious locales, most often from deeper water which we always associate with the potential for larger fish, and is always a positive sign that fish are actively feeding. 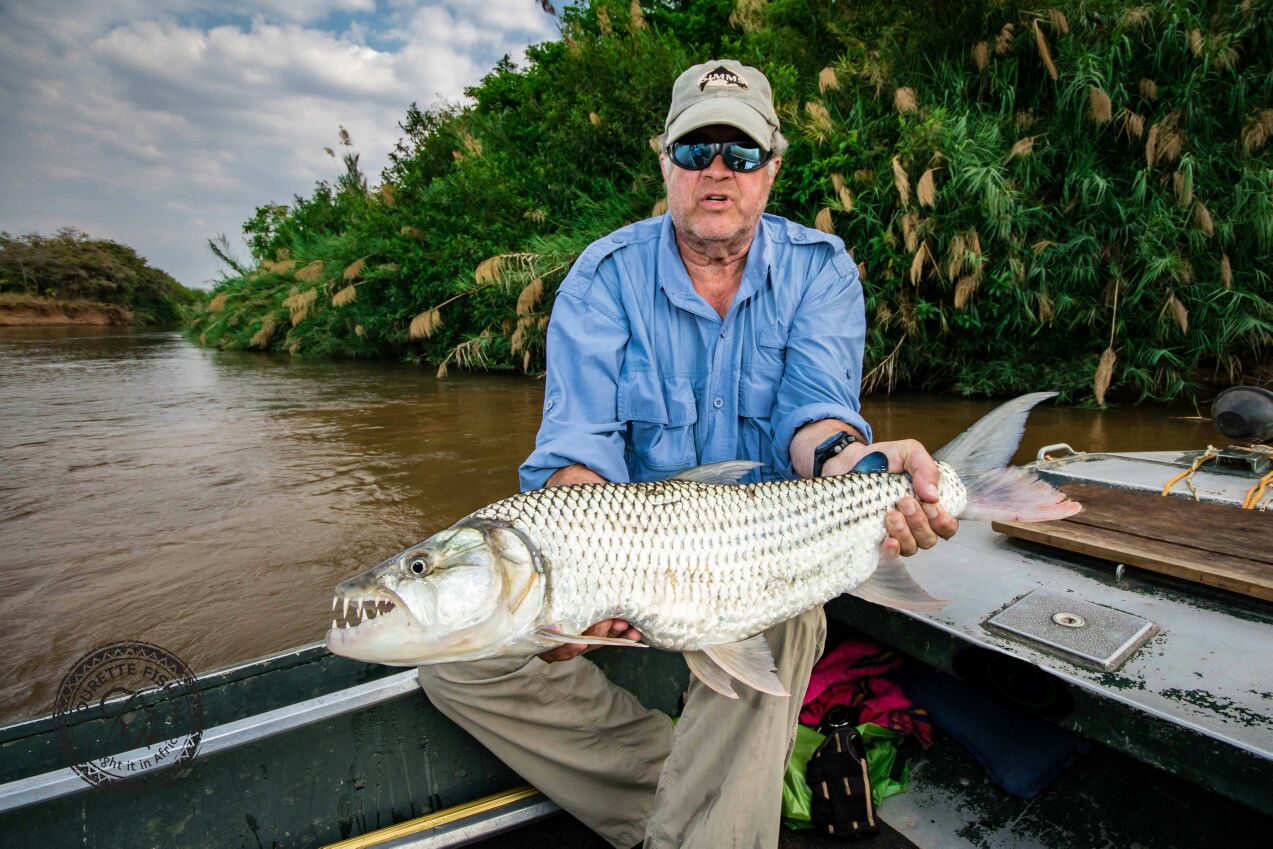 Since the fishing low point of the week on the third day, we had a feeling that things had gradually been stacking up in our favour, and so on the last day, we felt we had paid our dues and were due some luck! We decided to go out for an early drift, check in back at camp for a late breakfast and a rest then hit a short sharp midday session before lunch and a siesta, and then a final onslaught in the evening. Tim cashed in right away in the morning drift, picking up a runaway 12lb fish that tore around the boat before boosting off underneath it, causing Tim’s rod to buckle and break! Luckily it was so well hooked, and Tim was bent on landing this fish so without missing a beat, he grabbed the line and hand lined it to the boat! The spotlight naturally fell on Allan after this episode, and after missing out on a couple of hookups at the Bus Stop during the midday slot, he must have been feeling the pressure big time! He had paid enough school fees during the week, and he did show some massive BMT by stepping up and grabbing a 12lb of his own that really put his Echo rod to the test, but in this case came through impressively! Finally, a consistently action packed day, and finally just reward for two great guys who we had a lot of laughs with over the week! 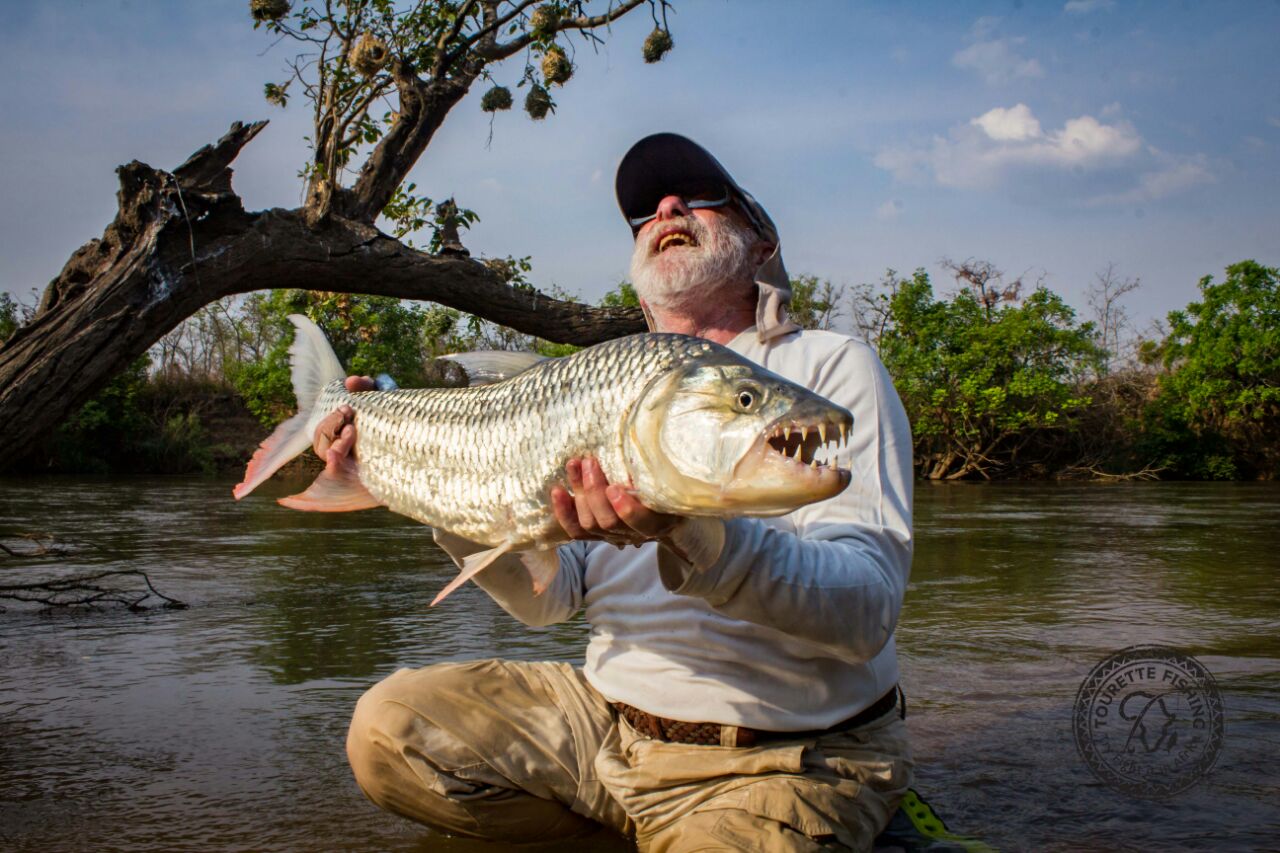 Alan enjoying the fruits of some solid fly fishing

It was great to have an old friend back in Tim, and to have made a new one in Allan, and we hope to fish with them again sometime. In the meantime, we will have a full complement of guides for the next couple of weeks as the season ramps up into the next gear, and hopefully there will be plenty of fish to keep us busy! 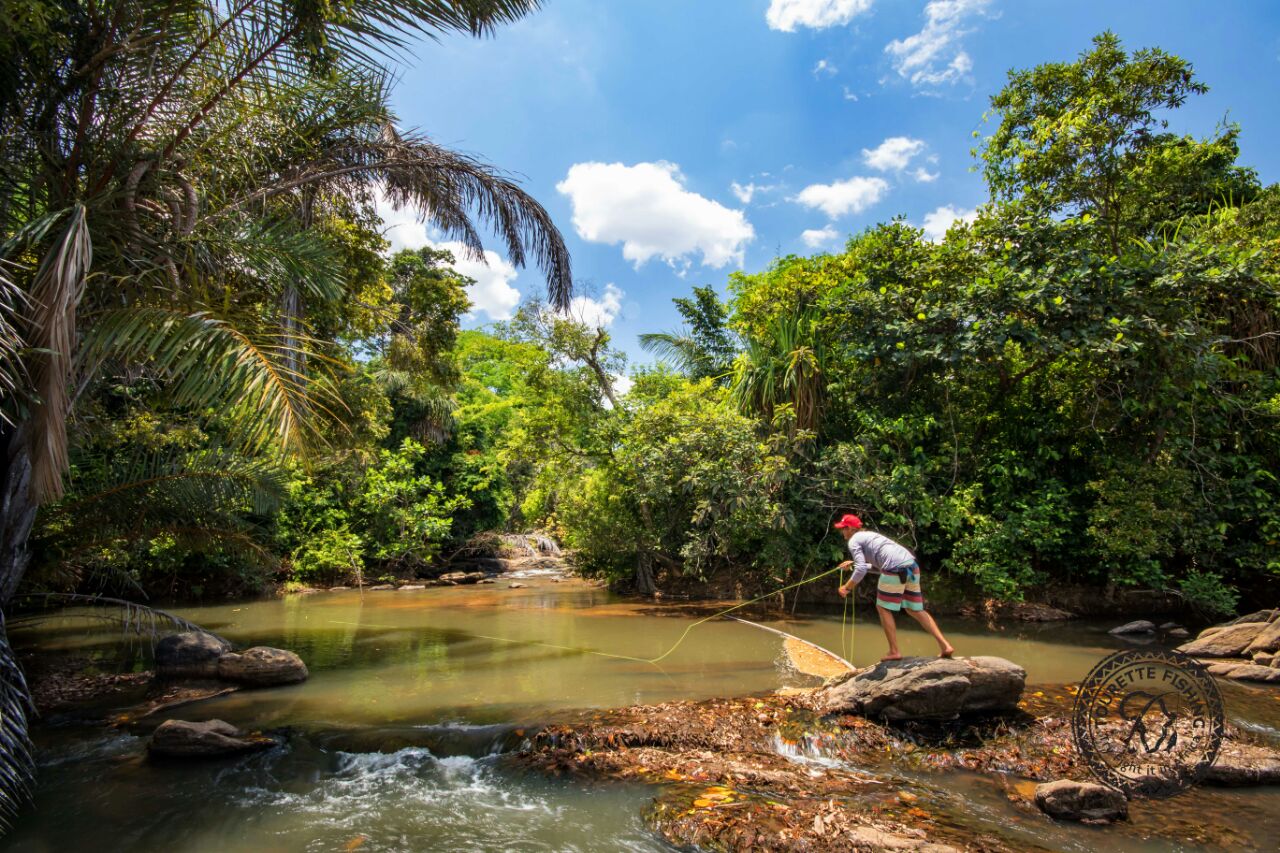 Fishing to yellowfish on the upper Mnyera
PrevNext