The best summary of the events of the second week of the Tanzania Tigerfishing season of 2016 was the ‘back to school, end of holiday’ feeling amongst the guides as we packed our four clients onto their departing charter plane. Thankfully there is never much time to mope around, as we welcomed our incoming guests, and we could only dive straight back into another week, and hope that it would be as entertaining as the previous one!

The fact that the fishing was pretty inconsistent over the course of the week just shows what a great time we had with a fantastic group of people in and around the greater goal of catching tiger fish. Pablo, from PointerFly Outfitters in Argentina, and hugely popular amongst the camp staff, fished together with Mark from Scotland, a gentleman with unmatched fishing pedigree, while the indefatigable Cobus fished together with Jil, his incomparably lovely wife.

Although the fishing style of the two boats contrasted, they did have in common the rollercoaster of enjoying ecstatic highs in between tough slow sessions that are so much a part of tigerfishing. Between Mark and Pablo’s fly fishing, and Cobus and Jil spin casting, this week’s experiences seemed to push the extremes of both!

By lunchtime on day one, spent fishing the lower Ruhudji, everyone had something to report. Mark was probably the unluckiest, losing a hefty fish in the 17lb region right at the boat, having hooked, fought and all but beaten it, ultimately undone by one last jump! Jil had enjoyed the best morning, making the most of a couple of good chances during periods of intense, accurate casting interspersed with some reading and relaxing! In one spot she landed a 10lb fish, and then soon after had the hit and run of a lifetime that required a mammoth effort to contain, and then retrieve. The end result, a personal best equalizing 12lb fish, and smiles all round. TIgerfishing has rarely looked so good!

No doubt taking great joy in his wife’s exploits, Cobus visibly relaxed in the afternoon, and soon began to make better use of the chances that his relentless and excellent casting was creating. A gamble to push on past lots of fishy looking water to reach the deep and fast Klausia channel paid off as Cobus’ jig was picked up tight up against a steep clay bank, and in the fast water, he had a real fight on his hands to bring in a beautiful 19lb tiger, a fish of a lifetime for a seasoned tiger fisherman, and just a brilliant way to end a fantastic first day.

Despite great looking conditions the following day, the fly guys in particular had a really tough outing on the upper beat. Pablo did very well to wrench a good 11lb fish out of ‘Impossibles’ which is no mean feat, and the effort and application of both gents could not be faulted. The feeling amongst the guides was that the fish might have been more focused on actively spawning over this period, or might have picked up a drop in barometric pressure, but either way, the husband and wife team also had slower going. Jil was once again front and centre though, this time with a new personal best 14lb fish; another great moment that was brilliantly captured by fellow TF guide Mark Murray in a photo that I think will be featuring widely in future publications!

The fish still seemed to have other priorities at least for the morning session of our third day, now on the middle beat, and any feeding activity was isolated and non committal. There was a really noticeable difference after a cool shady camp lunch, and both boats reported a steep spike in the number and quality of hits, and all the anglers had a busy but short afternoon session. It was great to carry this momentum with us on the drive back to the Mnyera! 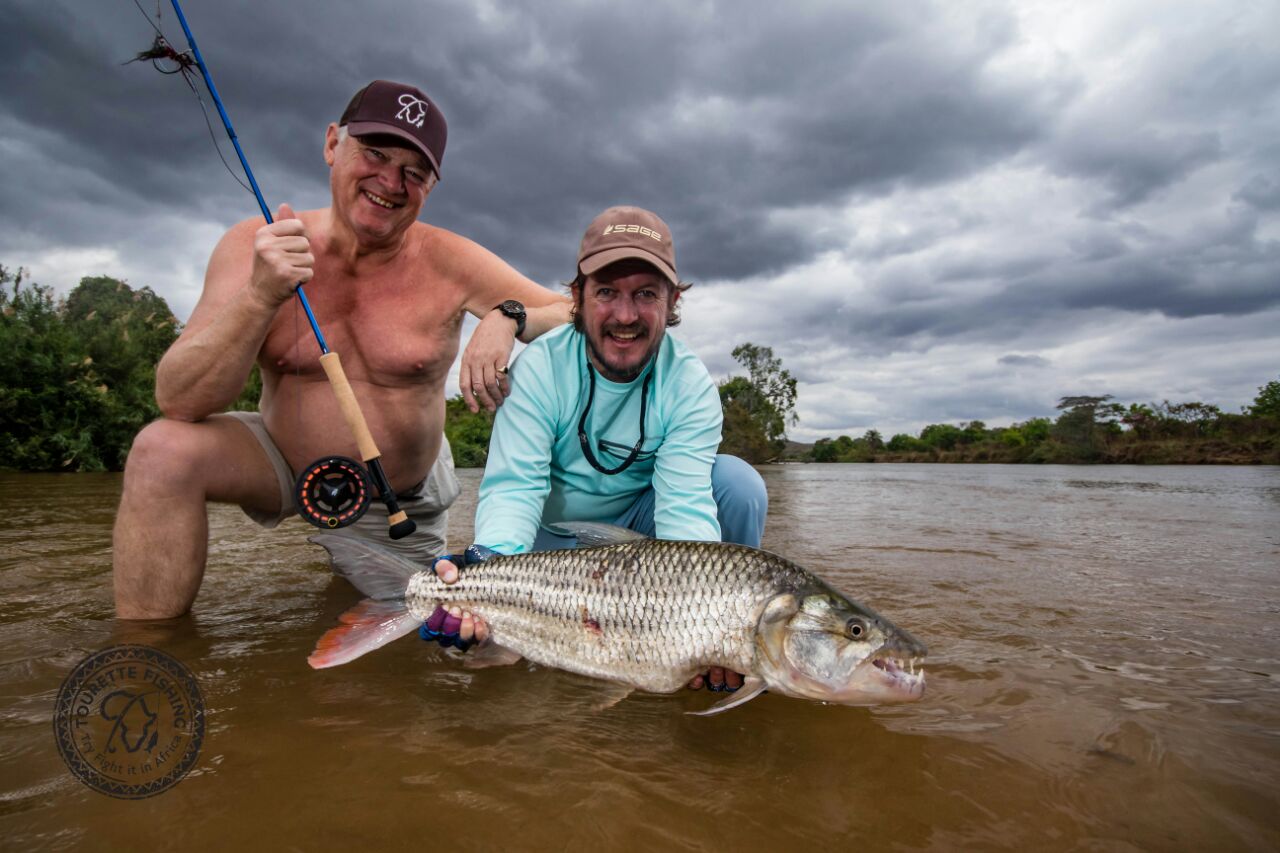 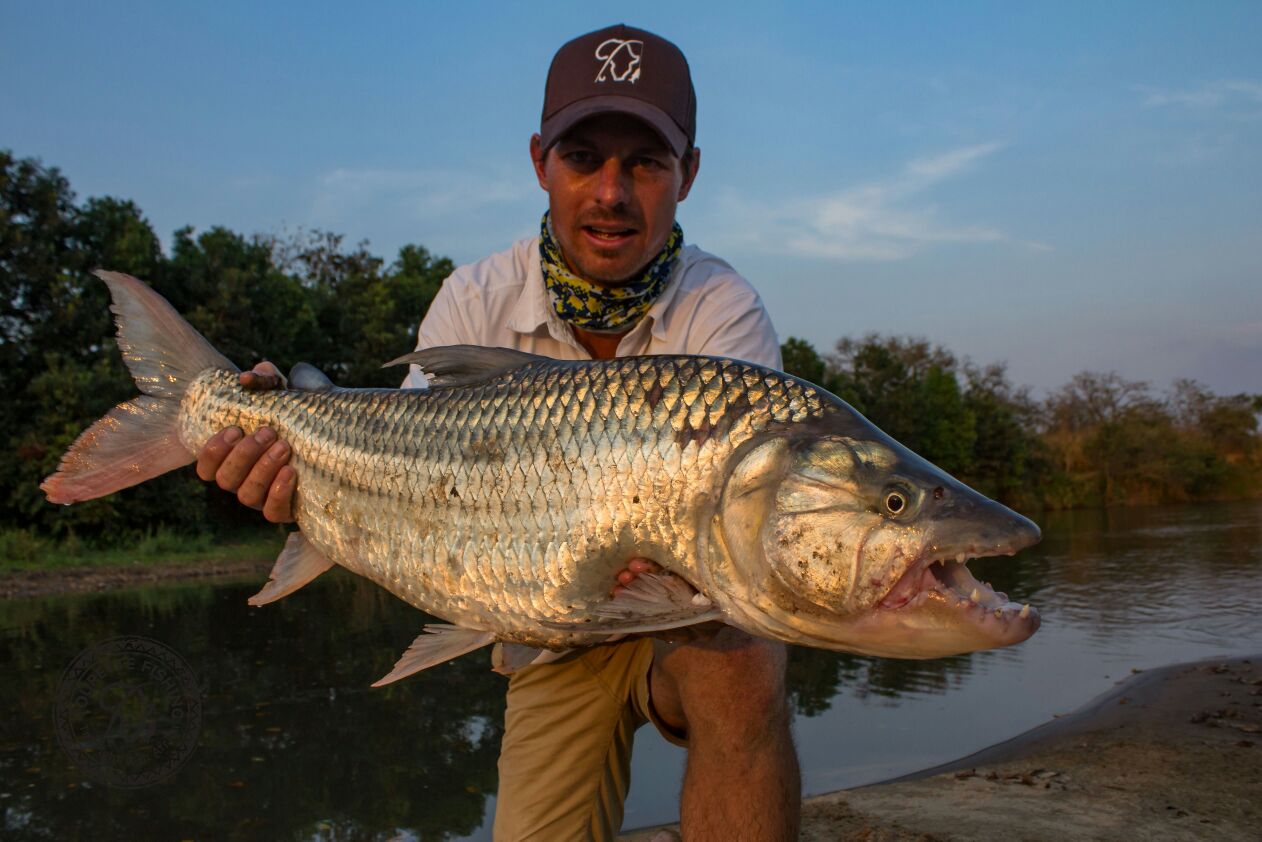 Cobus with a Tigerfish of a life time. This big lady was in the process of shedding her teeth as can be seen in the picture. 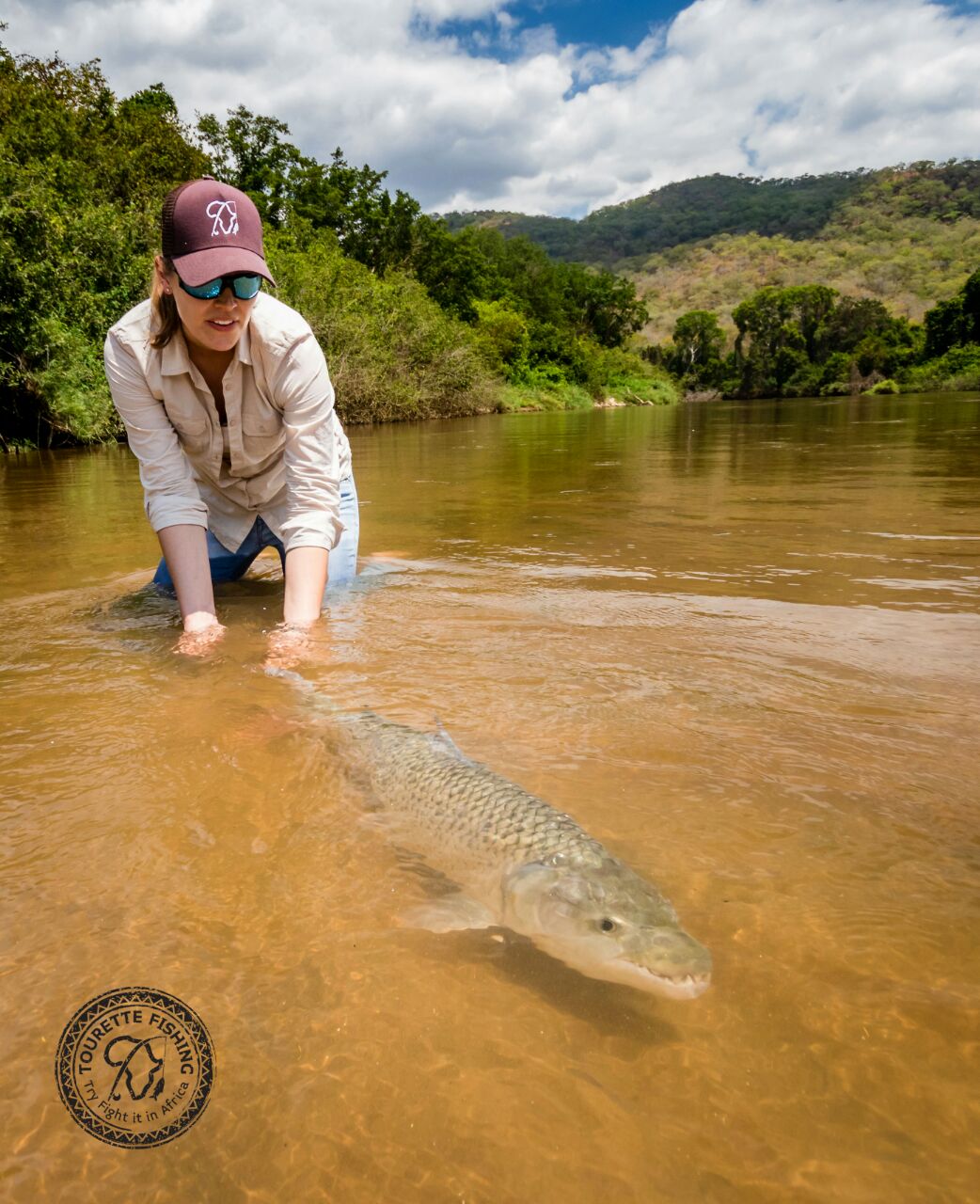 Not to be outdone by her husband, Jil releases a beautiful tigerfish on the Ruhudji River

Wednesday morning kicked off with a half hour rain shower, which always makes the guides nervous about water temperatures, and water levels, but it seemed very localized, and soon began clearing up. The lower Mnyera has a lot of the deepest water that we fish, and when the fish are pushed down, it can be quite a technical and tricky beat to fish on fly. Both Pablo and Mark had a good take or two early on while it was still and muggy after the rain, but as the cloud moved higher up and some gusty wind picked up, it seemed that the fish moved down deeper and tighter into their holding spots. Both these fly fisherman have been around the block, and both expressed a distinct preference for drifting and working structure to the anchoring, and slower working of deep water that would be required, and so after a quiet mid morning we made a call to return to camp and try again in the late afternoon. The contrast between the fortunes of the two boats was never sharper than on this day, as Cobus raised no fewer than 5 fish all around the 15-18lb range from the depths, managing to hang on to one of a very healthy 17lb to maintain his great form. Mark managed to bounce back in the late afternoon and picked up a couple of fish which went down very well!

The same pattern followed for the next day on the upper beat, with some concentrated action early on in the Kasingo rocks for Cobus, netting him a 15lb and 11lb fish before a drop in activity. Jil, who had been trooping on despite an aggressive bout of flu took advantage of this quiet period to return to recover in camp, while Pablo had also been slightly under the weather and had unfortunately missed the early action. Maintaining their attitude towards anchoring and slow working of water, the fly guys had another really tough day, as the fish just simply weren’t where the flies were. With the boat to himself, and Jil resting up in camp, Cobus took it up a gear in the afternoon, and together we detected a gradual improvement in weather, and fish activity. Starting with nothing through to a few bumps in good water, late in the afternoon found us in the right place at the right time. On anchor, fishing deep just below ‘Golden Gate’ we picked up a couple of presses, before a massive hit and surge had us both yelling out and thinking that this was it, the huge tiger we had been building up to! I caught a glimpse of a Vundu tail as it made a bee-line for the nearest submerged structure, and an all new excitement took over. Luckily Cobus’ rig held up, and after failing to untangle it from the tree, actually hand lined the fish back, lifted the tree, boga’d it and then cut the braid! After a couple of pictures, and opening some cold beers, Cobus was back at it, with the fishy feeling stronger than ever. Before the beers were even halfway down, Cobus’ reel was buzzing again. This was one of the most spectacular tiger fights to have been a part of, and it had it all. It must have run an extra 30m, 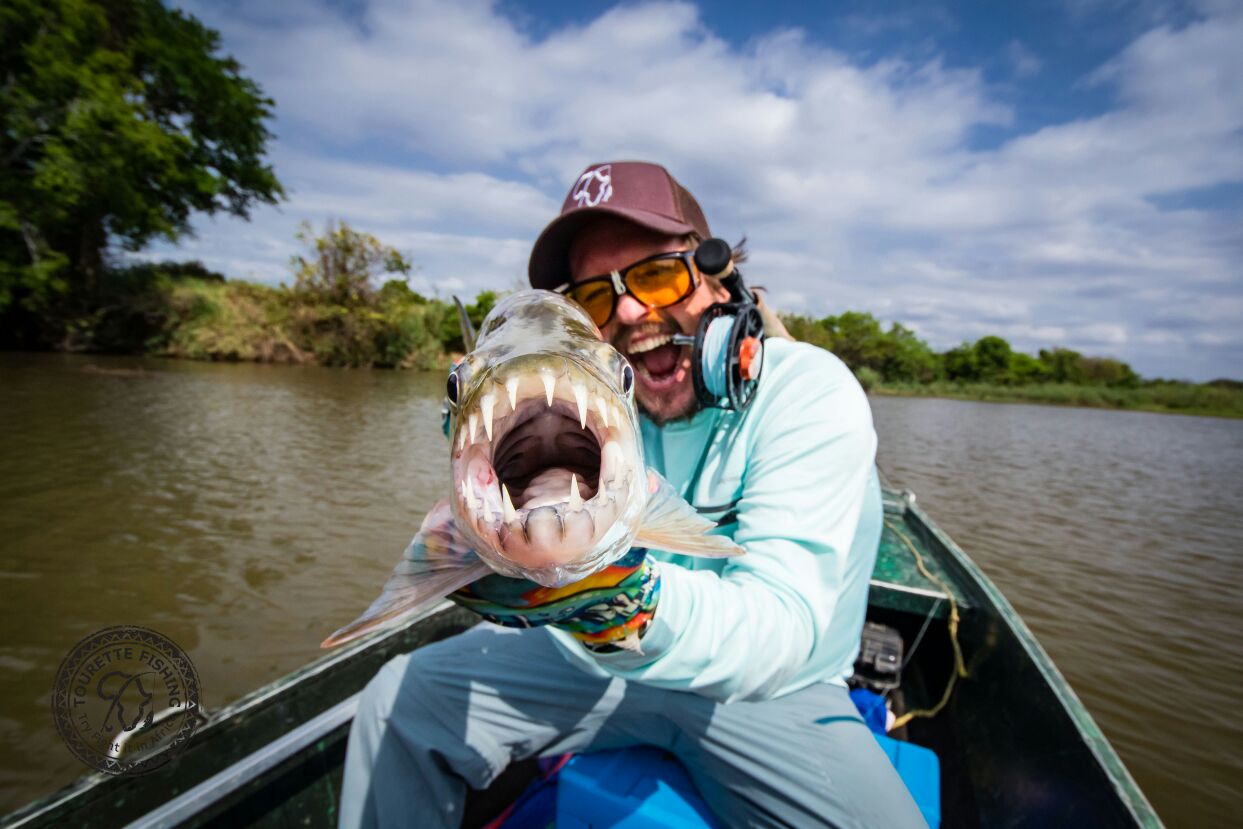 Pablo proudly displays the business end of a Tanzania Tigerfish

and then jumped five or six times as Cobus battled to bring it back up against the drop off. We had time just to rush back to the same sandbank and take some pics of this stunning 17lb fish, before cracking some more beers and heading home! Tiger fishing at it’s best!

It was a good indication of the events of the week that on the last day, everyone was just as motivated as on day one, all with something to prove. Pablo and Mark were still chasing some consistent action, and some bigger fish, while Cobus and Jil were in pursuit of the 20lb club membership! The fly guys were back on the boat, and roving around in the middle beat, while Cobus and Jil would be patrolling the Kasingo rapids. The weather pattern, and fish movement, seemed very similar to the previous day, 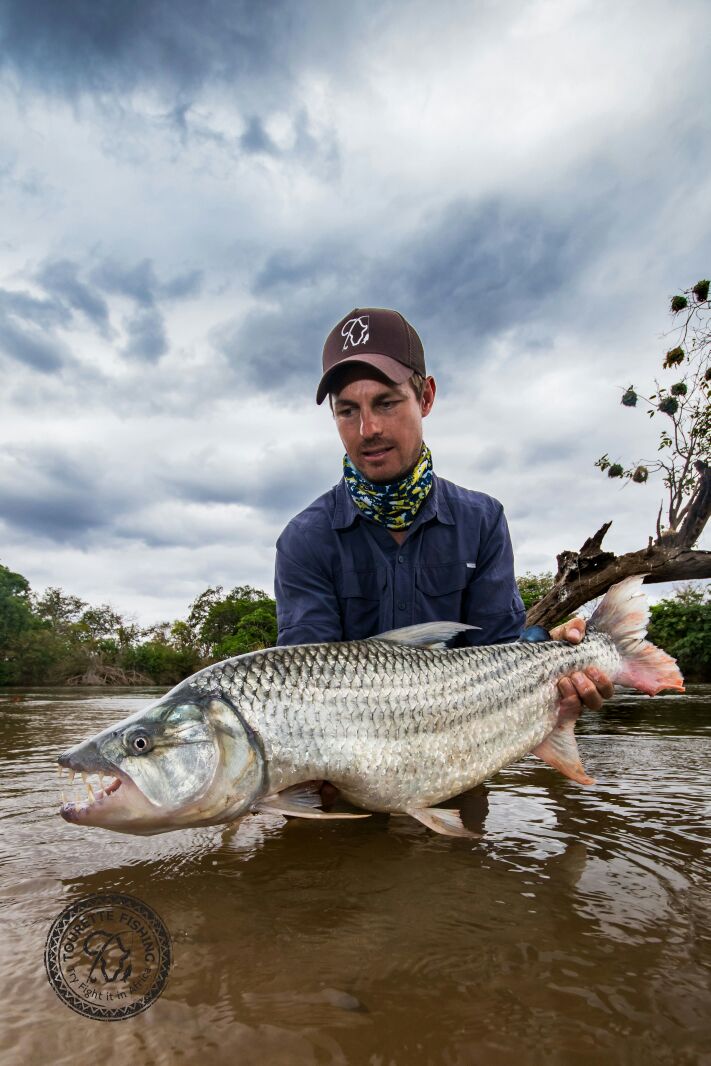 The big shoulders, thick caudal, and thickset jaw, are indicative of a Tanzania tigerfish in prime condition

with a small spike of activity earlier on, around 9am, before a long drop off. Then as the afternoon wore on, conditions became stiller and warmer, and the fish activity became more pronounced. This meant more hardship for the fly guys in the morning, but suited their style very well in the afternoon, as they started to pick up fish out of their feeding spots in shallower water and structure. The rapids followed the same pattern – after losing a big fish at the first pool right at his feet, Cobus had little to report up until lunch time, apart from a couple of smaller fish.

It was very fitting that both groups had their most exciting and dramatic sessions on the afternoon of their last day, and we were ecstatic that they could finish so strongly! Cobus found himself on a rock in the lower Kasingo region, wondering just how many 13-20lb+ fish could hold in one pool, and what it would take for him to land one, as he hooked and lost 8, including one brute that was the biggest he had handled all week. Meanwhile, Mark and Pablo were picking up hits and smaller fish as well as the occasional heavy pull, and generally having a great time until they finally decided to call last casts at the appearance of an edgy hippo downstream. Mark proceeded to plug into a strong fish that pulled him all round the boat, and the boat towards the hippo, which caused a fair bit of excitement on board! For him to land a 14lb fish in these circumstances was pretty special!

It was a turbo charged week that left us all buzzing, and we were lucky enough to enjoy some very special moments that were really about as good as tiger fishing experiences get. We hope to see all of these fine people back at some point! 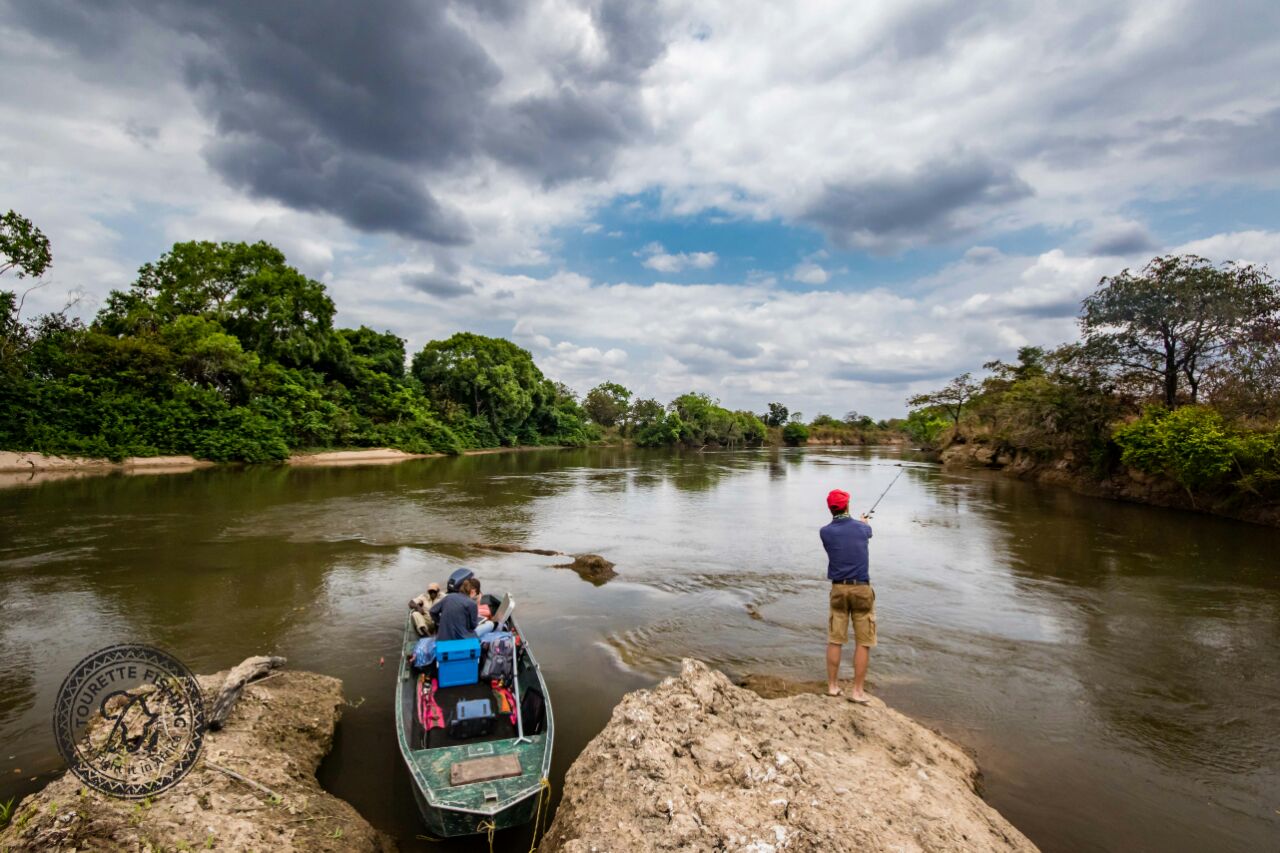 The magic of the Kasingo Rapids. Hope to some of the Mnyera Rivers rivers bigger tigerfish