Although the 2016 season has been a relatively short and compact edition, a cursory flick through the previous blogs was a good reminder of how lively and eventful it has been, and also went a long way to explaining why the guides team was digging so deep into energy reserves going into the last week!

The last week of a crazy season, with rain clouds building, a madcap mix of some returning clients and a high profile film crew on location to document it all, this was never going to be a normal week and as such neither was there any danger of a lack of motivation from the sharp end of the operation, the guides’ team!

The last crew in for the season, and what an enjoyable week it was.

After his mind blowing experiences of fishing the same week of last season, I’m sure Matt Harris had little difficulty convincing livewire Australian Hena, and professional cricketer Mark to join him on another quest for the huge fish and outrageous photo opportunities that only the Mnyera and Ruhudji rivers can provide, while Karl Bentele is a veteran of three previous Tanzanian Tiger trips, and it was fantastic to be able to welcome him back. These four gentlemen were to make their way over to the Ruhudji for the first part of the week in the extremely capable hands of Mark and Rob.

Stuart and I had the pleasure of hosting and guiding the first three days on the Mnyera with the legendary and intrepid Jako Lucas who had come to apply his considerable fishing and creative abilities to try and do cinematic justice to the pursuit of the Tanzanian Tigerfish. Teaming up with him for the cause was the fearless and peerless Rebekka Redd, while tasked with capturing the magic of the coming days were the dynamic and scarily proficient duo of Paul and Jeremiah of Drift Media. 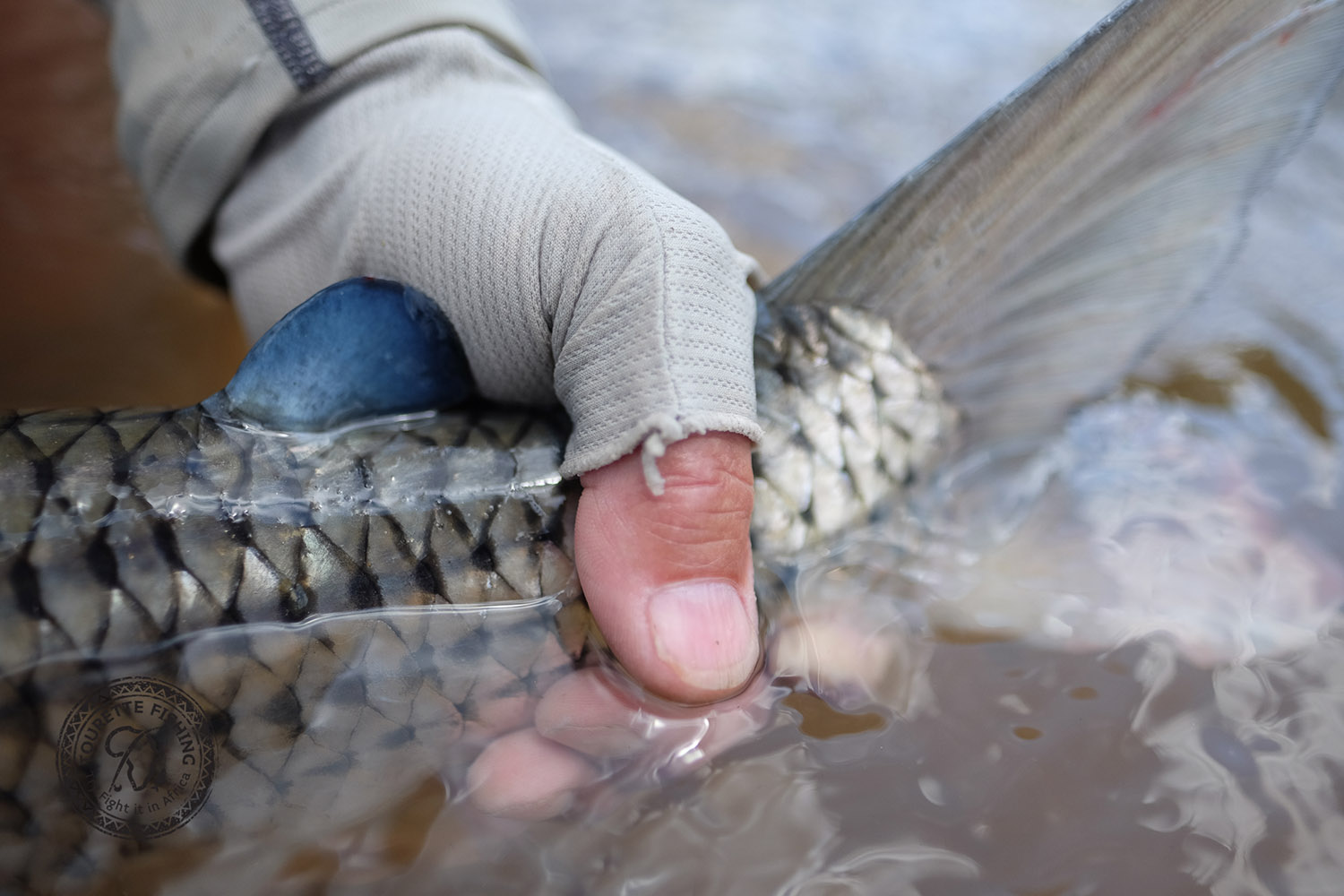 A quick side note on the development of targeting these magnificent fish on the surface: Although targeting Tigers on surface is not by any stretch a new development, and is fairly common and effective in certain areas of the Zambezi, it is also not necessarily a mainstream method of consistently targeting big fish. Here in Tanzania, I would suggest that maybe the turbidity of the water, and the fact that big fish have always been so successfully targeted deeper down as the main reasons for not actively pursuing the surface option as vigorously as it could have been. The inevitable comparisons between Tigerfish and its closest apex freshwater predator contemporaries the Golden Dorado and the Peacock Bass have also always suggested that they could be successfully targeted on topwater, and as a result many have continued to raise the question, rightfully refusing to accept that it is an exhausted avenue. The mantle has been taken up with a real purpose here by the guides team over the last three seasons, and through different experimentations and actively encouraging anglers to try more surface lures, the results have been incredible. Special mention here must be made of senior guide Stu Harley who has made it his personal mission to develop a surface fly that caters specifically for the Tigers’ unique requirements, as it has become increasingly clear that it is far from being a case of chucking in something that makes as big a splash and as loud a noise as possible. In the Kasingo rapids on the Mnyera River, we have the ultimate arena to explore this exciting option, and it has reached the point where Stu’s fly creation, the ‘Harley Shake’ is the go-to option as THE most effective way of raising and catching trophy Tiger fish in this incredible section of water. It has been amazing to witness and be a part of such a development that has taken an already special fishery to another level, and I think everyone can be excited about where it may still go. 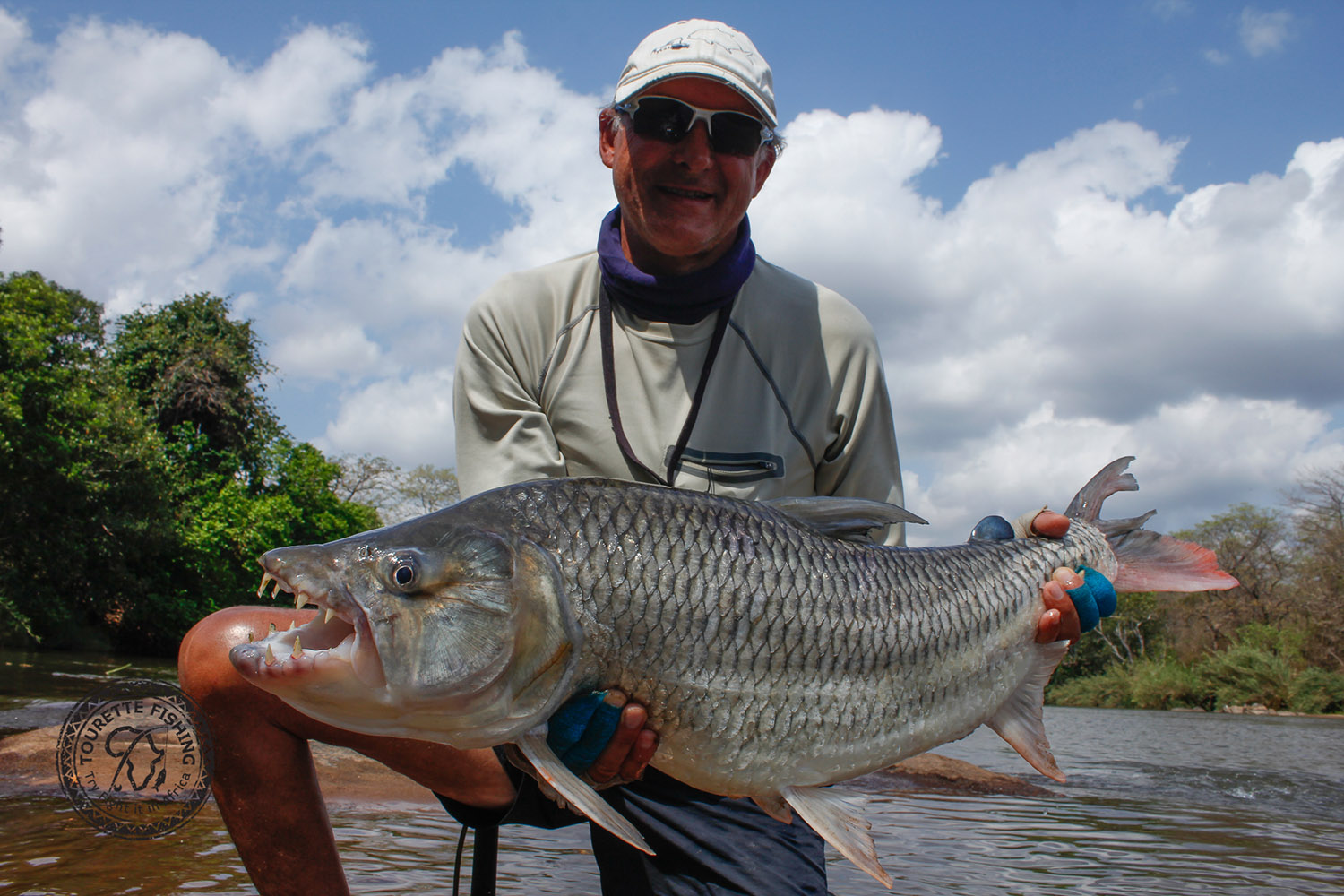 This top water magic was definitely something that we wanted Jako, Rebekka and co to experience, and hopefully document, so it was straight up to Kasingo on Sunday, followed by a full day on the river on Monday, and then a power combination of hot spots on the river and then back into the rapids for a late afternoon session on Tuesday. The fact that by 5pm on the first evening all the cameras had been parked, and the crew were taking turns at casting in between reviewing the unbelievable footage they had captured, said it all. It had been a far from wild fishing day, but the combination of quality angling by Jako and Rebekka, phenomenal camera work from Paul and Jeremiah, and stella guiding from Stu and Greg had resulted in some mind blowing results. From just a few chances, Rebekka had a 14lb, Jako a 17lb, Paul a 19lb, and Jeremiah countless Gigabytes of footage out the top drawer. A brilliant start to proceedings!

That’s a wrap for from an incredible 2016 season

Over on the Ruhudji, the unstable weather as the rains approached seemed to be holding the fish back, and the anglers were working hard for fish. There were some really quality specimens in the mix though, and Matt Harris was soon into the heavyweights once again with an 18lb slab of Ruhudji alloy. Hena and Mark both claimed a handful of fish up to the 13lb mark which went a long way to maintaining motivation, and Mark quickly established an MO that involved tangling with at least 1 really big fish each day that would somehow contrive to escape! Overnight rain and a minor rise in water levels on day 2 did not help the cause, but the group persisted admirably despite long hours of no fish activity. This hard spell endured right into Tuesday afternoon, until about half an hour before the crew was due off the water to head back over to Dhala camp, when suddenly the Tigers came alive like only Tigers can, and everyone was reminded once again just what makes these fish so special!

On the Mnyera, the river session on the Monday, like on the Ruhudji, was mostly hardship fishing, and after the highs and excitement of the day before, it took a big effort to maintain enthusiasm and execution levels. Luckily there was never a dull moment with this crew, and between some high quality casting instruction from Paul, and plenty of off the wall humour fuelled by some end of season madness, it was a very entertaining day! Regarding the ‘serious’ business of Tiger fishing, Jako was very unlucky to have a fly line snap on a fish that he had done everything right on, and that probably would have been his biggest of the week. Rebekka had a day of personal battles trying to recapture her mojo of the day before, but wouldn’t have to wait long before it returned in spades on Tuesday. Jeremiah was roasted twice by heavy duty fish late in the afternoon to wrap up a harrowing day of angling! The Mnyera fared better than the Ruhudji on Tuesday, and everyone was back on top form. Consistently amongst the fish, and relentlessly acquiring inspirational footage, we powered our way upriver and back into the rapids for a final showdown at Double Up, this season’s theater of dreams. Rebekka confirmed her return to top form with a breath taking hook set and fight to land a gem of a fish of 15lb, while Jako was also at it again with double digit fish, all off the top, and all while the cameras were rolling. 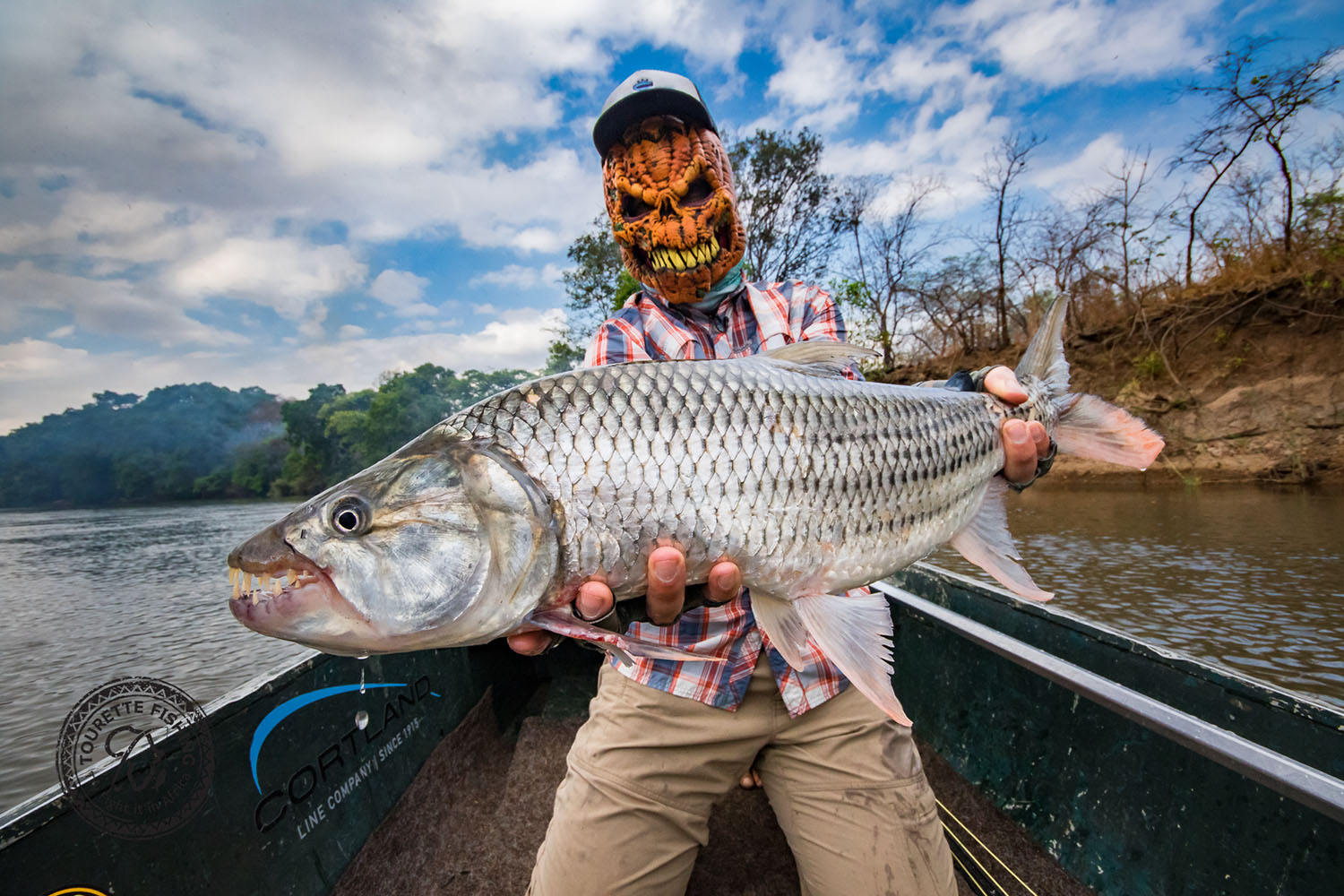 More so than ever it felt like we had already done a full week’s fishing by the halfway stage, but there was plenty for both groups still to look forward to. Matt, Hena, Mark and Karl were keen to get amongst the bigger fish that seemed to be showing themselves a bit more on the Mnyera, while the Ruhudji has to be the most scenic setting to catch any tiger fish, and so had obvious appeal to the film crew.

The Mnyera didn’t disappoint in that it did provide the big fish shots, although it must be said that they were in very narrow windows and that they were hard earned. Mark did not waste much time in re establishing his MO from the Ruhudji, as he was sorted out by a big fish early doors on Wednesday morning, again without doing anything really wrong and again with a 15lb+ fish! Himself and Hena bounced back with some great double digit fish from 10-14lbs to register a very respectable day of tigerfishing, contrasting sharply with Karl and Matt who had to wait until the last half hour for any action at all. Luckily Karl was up to the challenge, and brought home a cracking 17lb fish to rescue the day!

As it turned out, the fishing stayed very tough on the Ruhudji and there was not a whole lot to report fishing wise. Jako showed his class by converting some rare opportunities, while Jeremiah finally joined the party and weighed in with outstanding 14lb and then 15lb fish.

By the last day of the week, as fulfilling as it had been, there was still a lot of unfinished business on both rivers. Matt and co were still chasing a really big fish in the league of his last year’s effort, while Jako and co were also searching for the marquee shots of a type A Tanzanian trophy to round off their efforts. Hena and Karl walked straight into a boiling pot at Double Up, and by mid morning Hena had an 18lb; 20lb; 13lb; 11lb and 16lb fish to his name from a mixture of surface and streamer, while Karl also cashed in a 16lb! It was an incredible session, and huge credit to the anglers, Hena in particular as his southpaw opened up new angles, and his pin point casting helped to extract even unwilling fish! Karl consolidated his week with a well taken 13lb from a deep seam above Double Up, while for Matt and Mark, it was more circumspect. After coming out on the wrong side of a handful of half chances off the boat in the bottom of Kasingo, Matt squandered his chance of the week when he couldn’t quite stick a hungry and committed hulk of a fish that made its way straight into guide Stu’s ‘big 5’ fish seen in Tanzania! 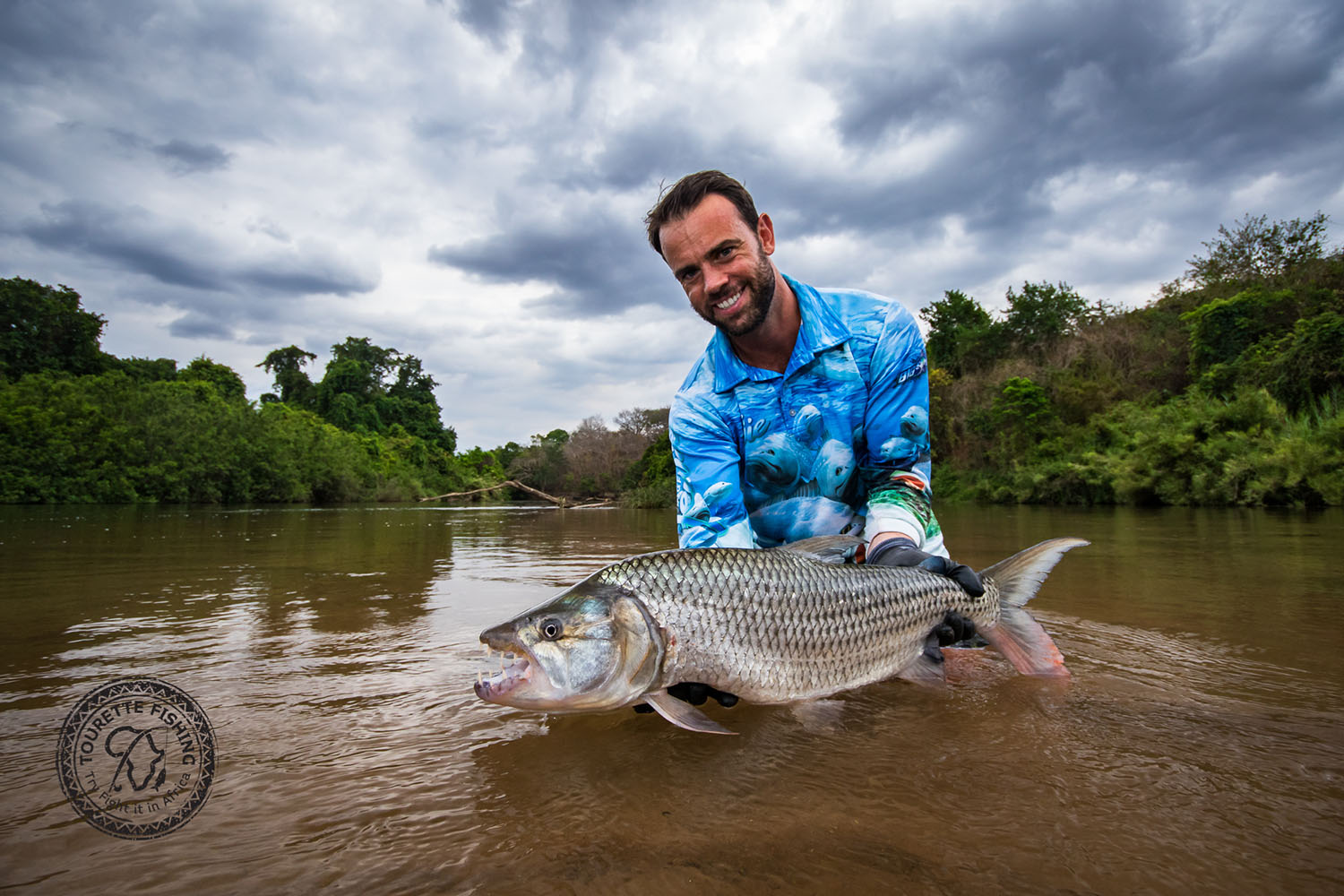 On the Ruhudji, I don’t think anyone really expected anything different from the previous days’ tough fishing, except maybe Rebekka who holds herself to very high standards, and was due another significant contribution. When guide Rob tee’d up the opportunity on a deep drop off on the Middle Ruhudji, Rebekka stepped right up and bagged herself and the crew a 20lb stunner, a very popular fish and an incredible way for a special week to come to an end!

It was a week that took a monumental effort to pull off, but the special thing about the Kilombero Valley is that the rewards really are limitless and we were lucky enough to be able to appreciate it fully. To feel refreshed and rejuvenated, and completely drained at the same time, showed that this week had a huge impact on all of us, and gave us a glimpse of where we hope to pick things up again from next season! 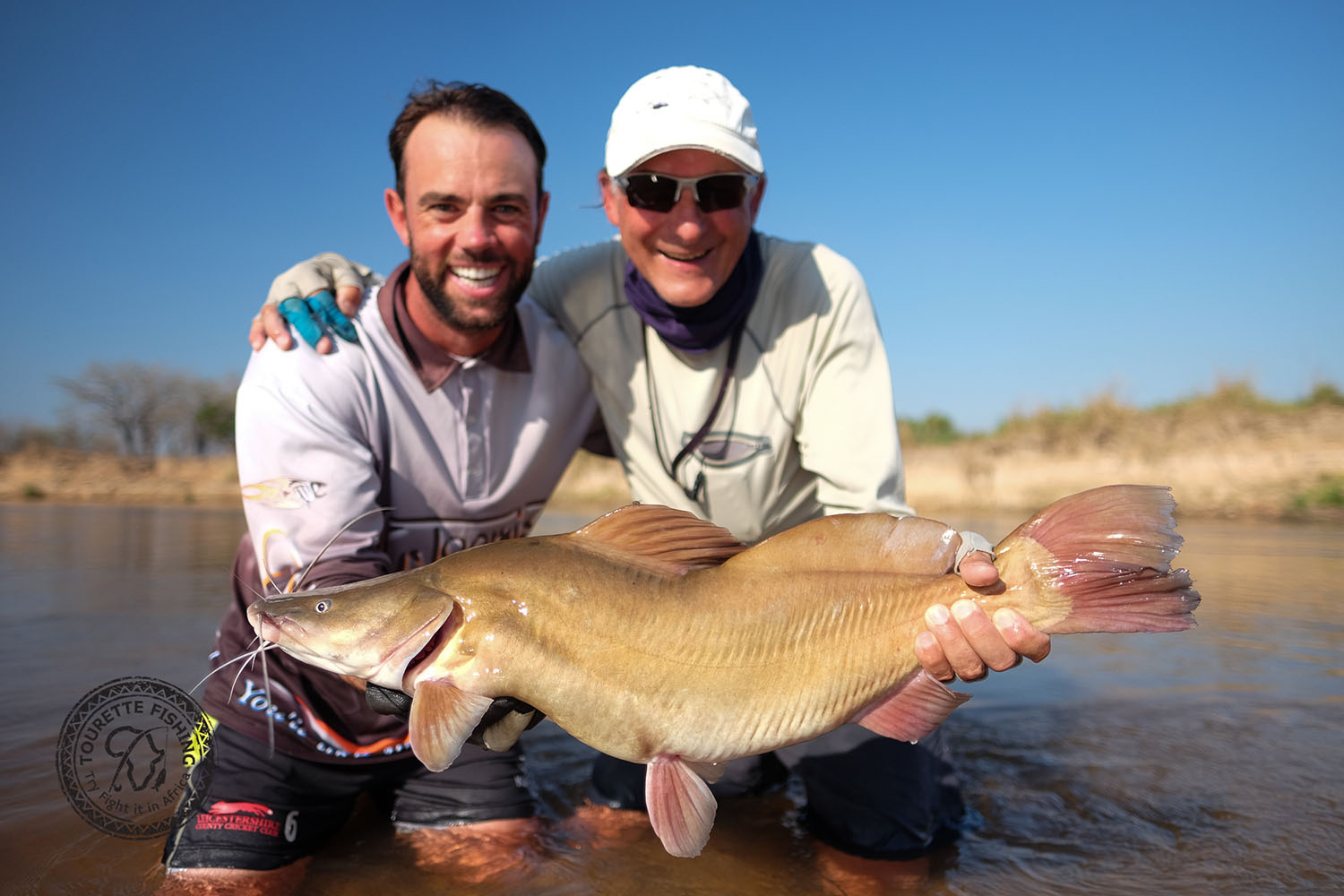 Although it is time to call a wrap on the 2016 Tanzanian Tiger fishing Season, despite it already being a household feature, I think there are very exciting times ahead for this incredible fishery and wilderness, and we look forward to being a part of this with all our returning and new guests in the coming seasons! 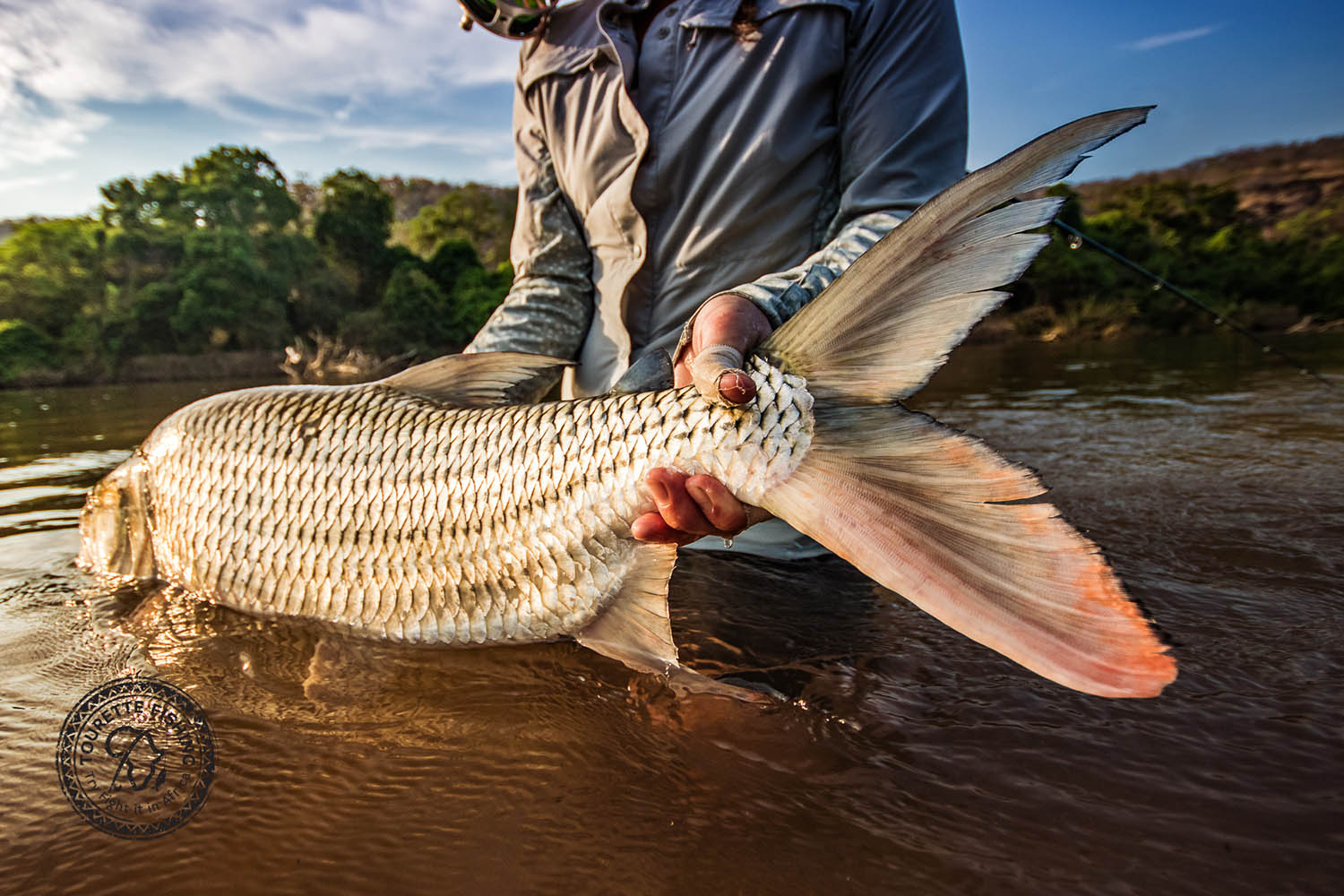