We welcomed an All African group to camp this week. The Inside Angling and WildFly crew of 6 anglers/cameramen was ready film another few episodes for their respective channels, showcasing the incredible fishing in the Kilombero North Safari Concession. As well KNS guests Kobus and Anton. The goals for the week were clear. Ensure Kobus and Anton experienced the best of the Mnyera and Ruhudji River, and achieve PB tigerfish, and create some incredible content with the WildFly and Inside Angling crews.

The filming got off to an explosive start as the first fish of the week was a 14lb tigerfish landed by Mike. The focus for the filming this week, was to get as many fish on the surface as possible. This visual method of fishing is incredibly exciting, and lends itself well to creating some great shows.

The Mnyera session brought about some interesting fishing as well as a lot of frustrations with numerous fish showing scant regard to anglers and tackle. But, as we are so often reminded, this is the nature of tigerfishing. The biggest fish of the week landed by the fly crew was a 15lb beast that gave Jeremy something to write home about after a blistering finger burning first run. The Inside Angling team had a stellar day on the upper Mnyera with 6 fish landed over 10 pounds. The biggest being 16lbs and 14lb landed by Craig and Mike respectably.

Anton and Kobus’s time on the Ruhudji was also one to remember with both gentlemen landing some huge fish with the biggest being one of 19lbs. Both men were also captivated by the beauty of this river, and the fauna and flora in the area.

The Ruhudji river came to the party for both film crews, with lots of action on surface and sub-surface flies and lures. The upper beat provided the most incredible action as the Inside Angling crew landed a 19, 17, 14, and 12 lb fish, on top of smaller rats and mice, all in a morning sessions.

The Wildfly crew had bit of a tough morning, but was rewarded with the fish coming on later in the day. A highlight of the session was when Jeremy “hooked a log ” which turned into a rare and incredibly strong 16lb Bagrid catfish. The next day proved to be tough for both boats on the Ruhudji due to gusting winds bringing with them some unsettled weather. The fly crew managed however to land a respectable 14lb and 13lb tigerfish in the tough conditions.

Anton and Kobus found themselves ending their trip on the Mnyera, and with it brought a few memorable days of fishing for the two close friends. Together they landed two fish of 19lbs, above a wide spread of tigerfish of various sizes. What put a cherry on top of it all so to speak, was a fish caught at the rapids that at this current time in an unidentified species for us here, but in all likely hood belongs to the Labeo family, however a weird looking denizen of the deep none the less. The week was special in that it brought old friends together, to share incredible experiences with each other, as well as providing the perfect platform to forge new friendships around a crackling fire on the banks of two of the wildest rivers in Africa.

A tip for the week is to remember that at times the fishing will be tough, but opportunities will present themselves. So keep positive through the lows, and take opportunities of the highs, because they are going to come around, and when tiger fishing you have to be prepared. Until next week.

Brent and the entire KNS and TF teams. 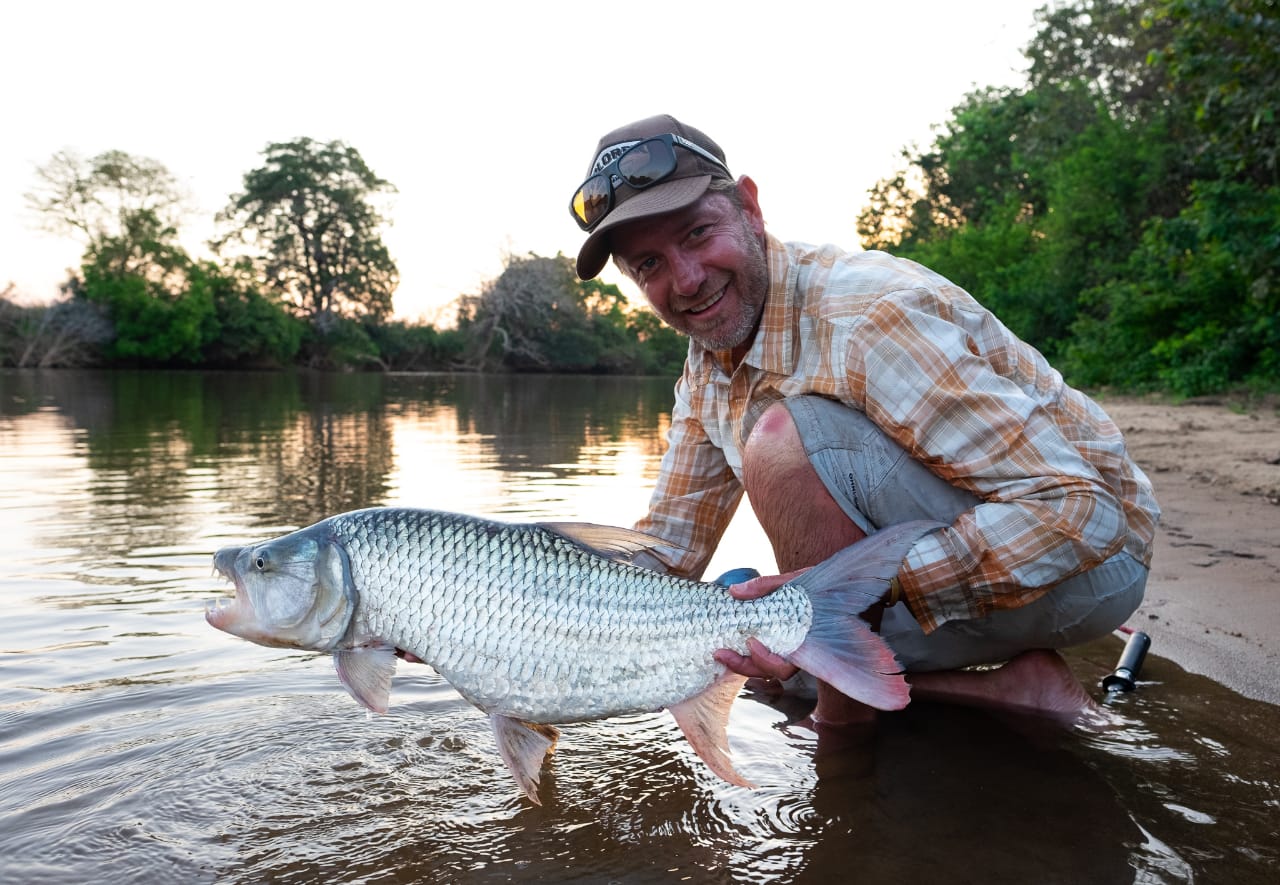 Jeremy from WildFly getting in done while filming for the show 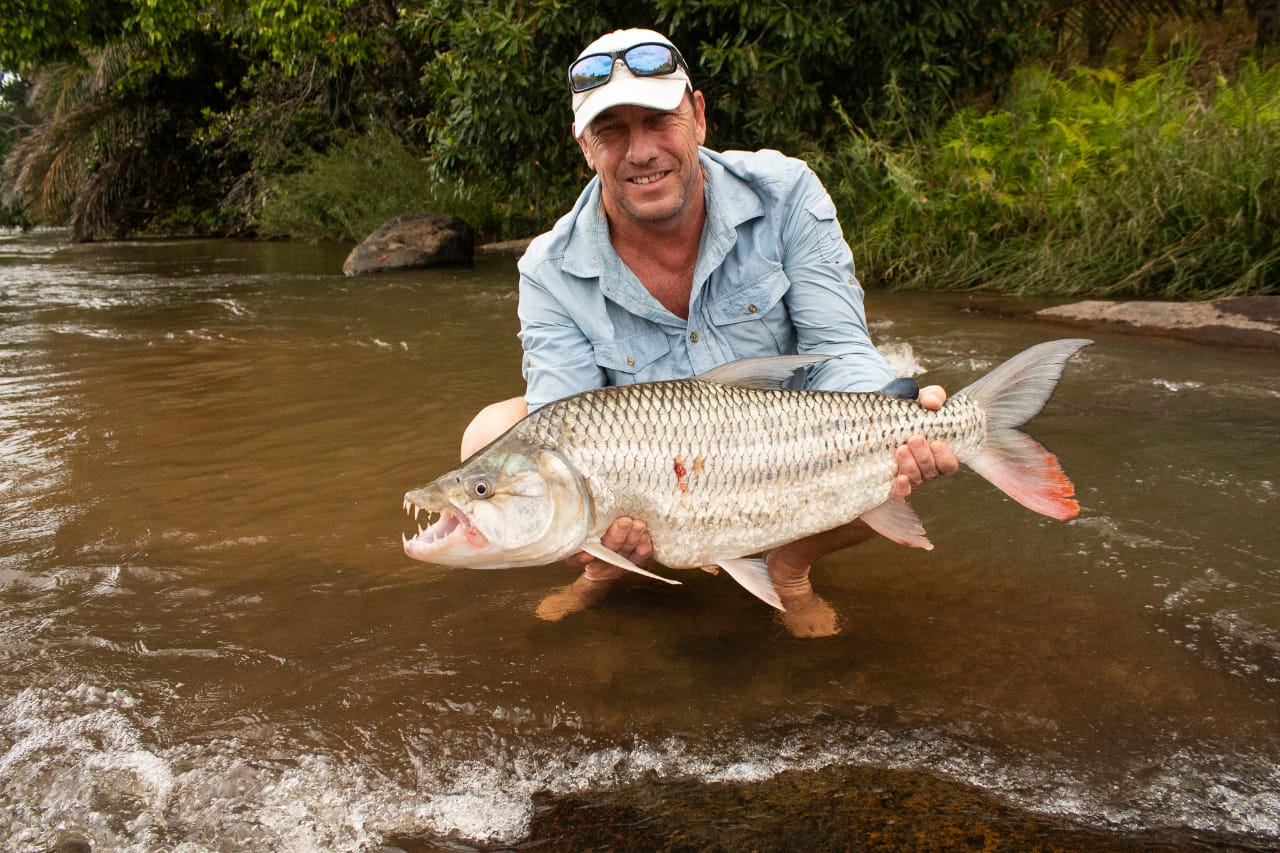 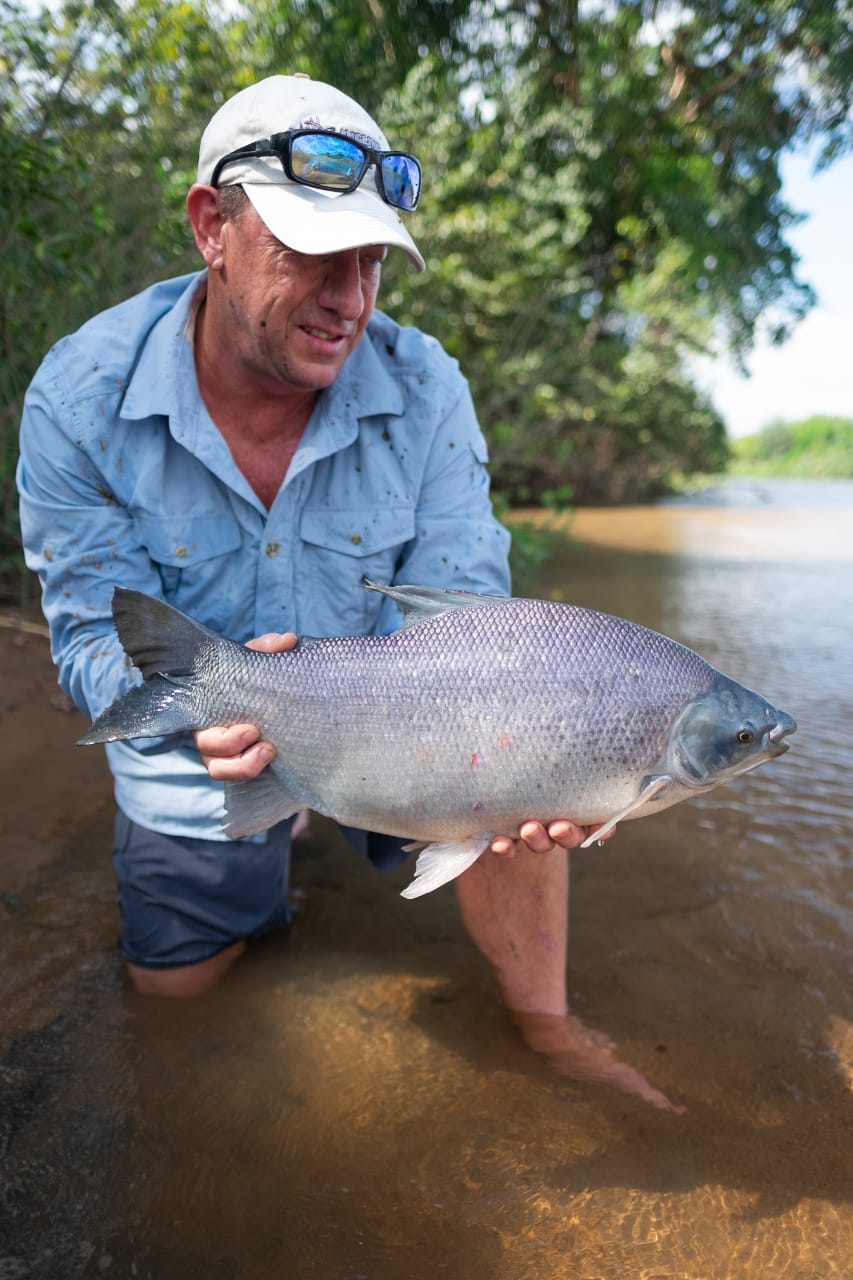 Craig managed to add the rare fruit eating Dnungu to his species tally. 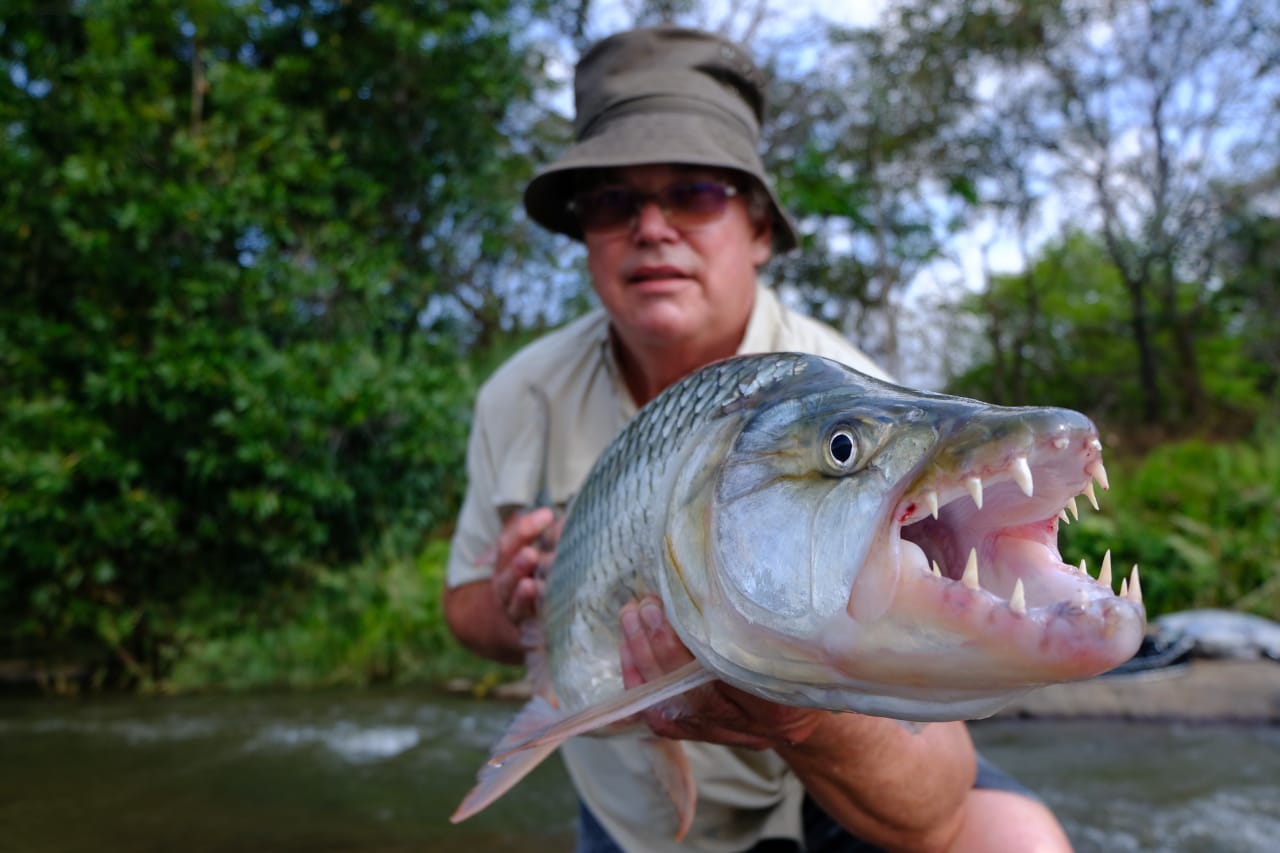 A fine tanzanian tigerfish from the Mnyera River, Tanzania 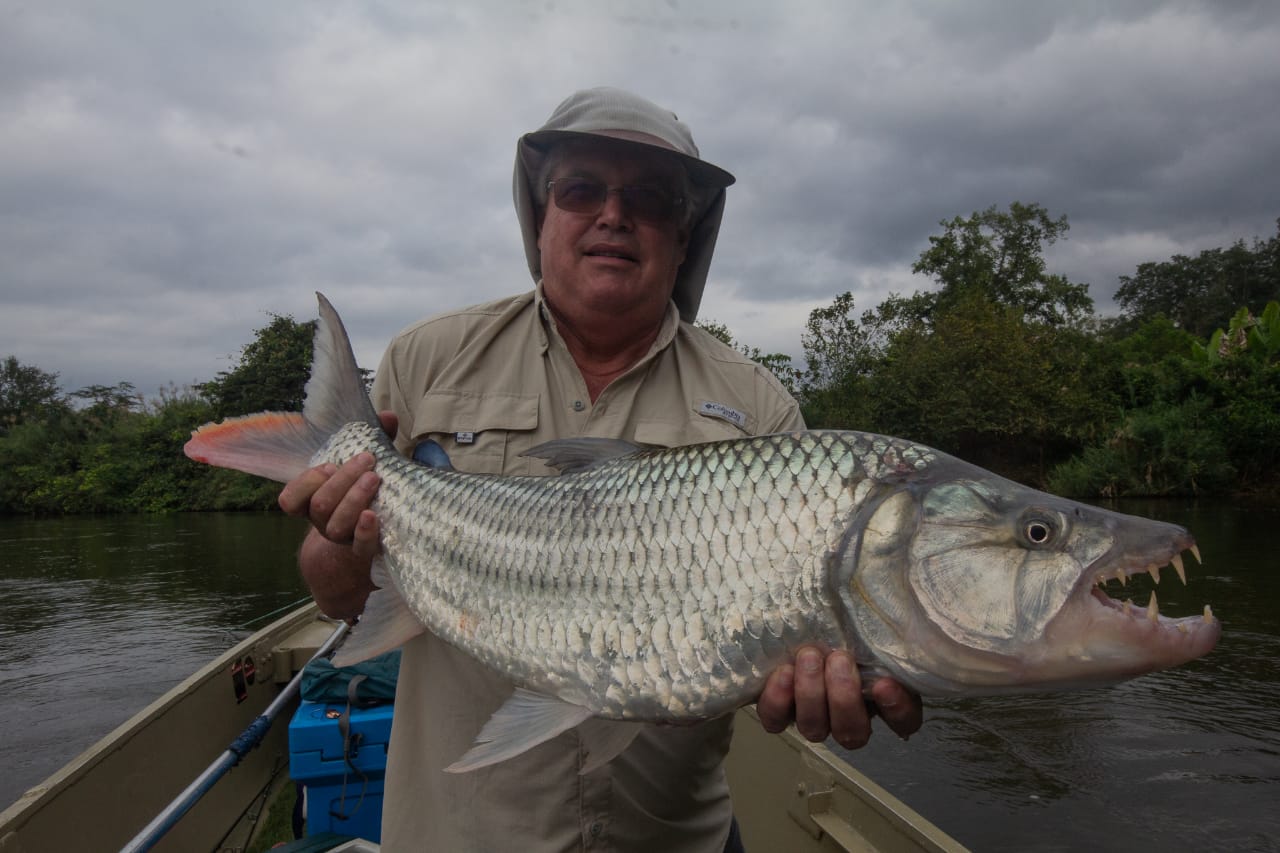 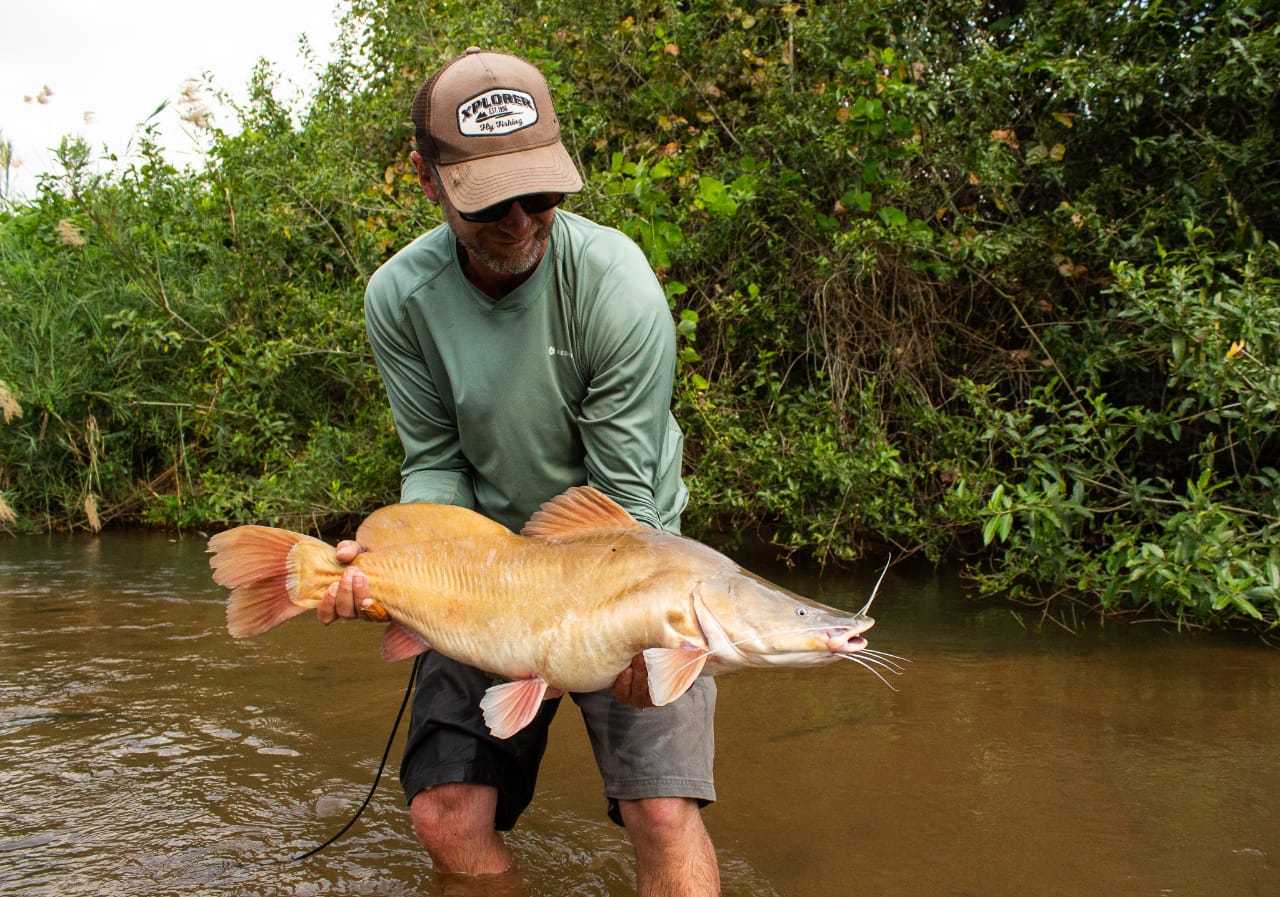 Jeremy was fortunate enough to catch one of the most powerful fish in the river, the Bagrid, or yellow catfish 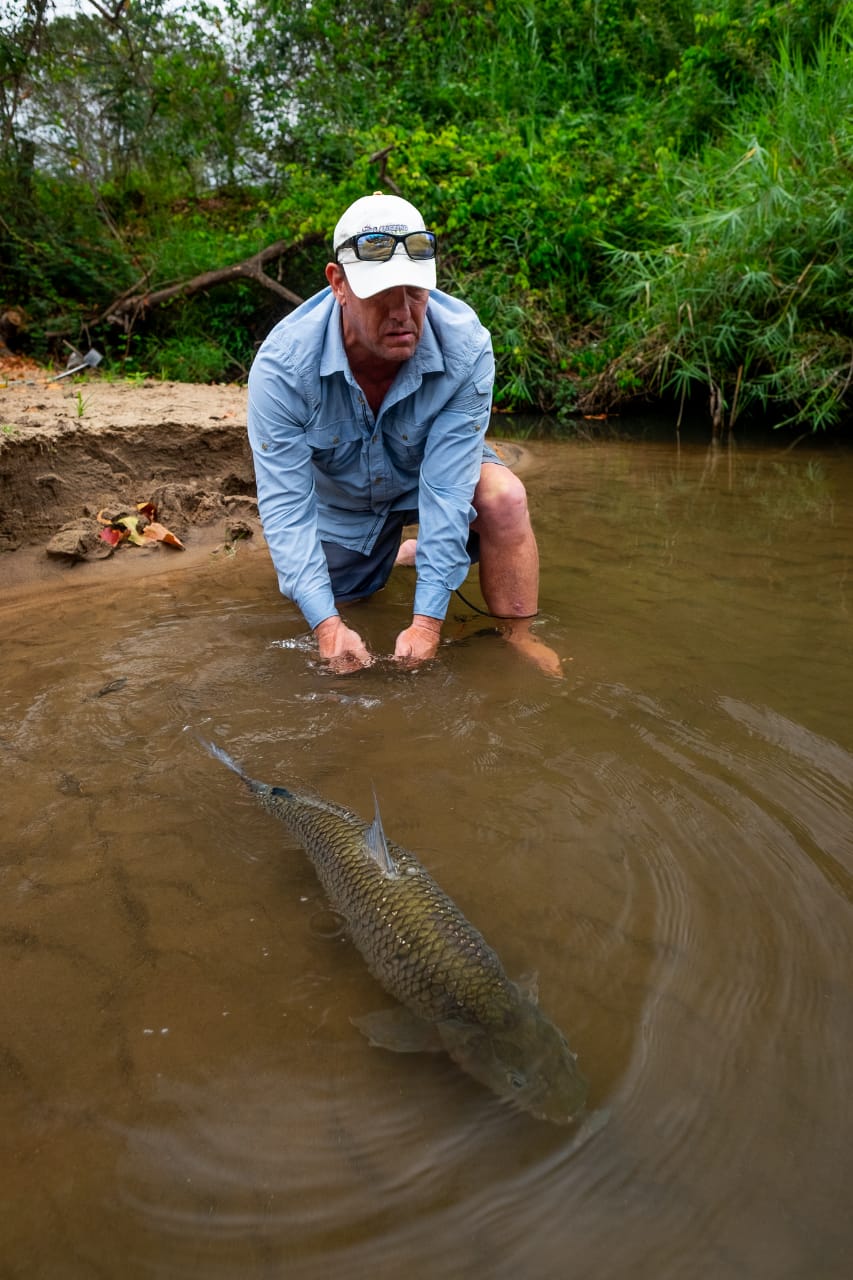 Craig, releasing a heft 19lb tigerfish on the Ruhudji River

What species of fish is this? We are not entirely sure. We consulting with leading experts to get more answers