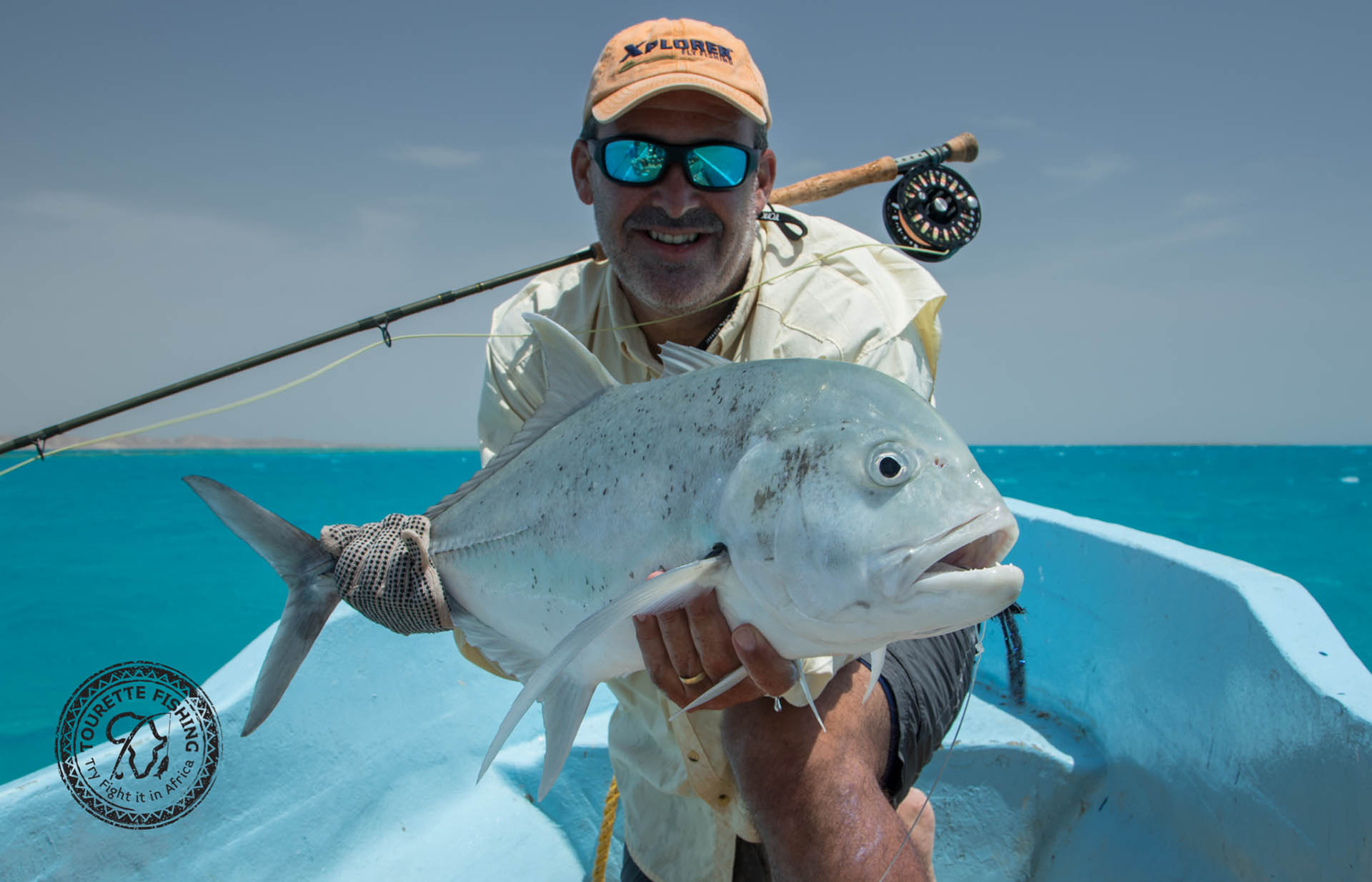 John with a Nubian Flats GT

We were joined this week by John, Richard, Platon and the film crew of the popular South African fly fishing TV show, WildFly.
The forecast for the week looked okay, with good weather for the first three days, followed by two windy days and then calm conditions again for the final day.

So after setting up the rods and a tasty Italian breakfast on the morning of Day 1, we headed out for the day very excited. One boat headed to the South Eastern corner of the Big Island, while the other boat, with the film crew, headed for the North West.

Unfortunately the water on the flats was really warm right from the start and carried on heating up throughout the day. The fish were really scarce and the going was quite tough.
We found some triggerfish but they were really tricky. The majority of them were very skittish and spooked for almost anything we presented to them. This left both angler and guide very frustrated, but that is what makes fishing for triggerfish so interesting and addictive…just when you think you have got them figured out, they bring you back to reality very quickly and you have to almost start all over again.

Towards the end of the day however, the wind started to pick up and so did the fishing. We started to see some more positive reactions from the triggers and on the tease some really big fish decided to join our party. Bohar snapper, bluefin trevally along with some very angry GT’s to name just a few species. Platon cashed in handsomely and ended the day with a solid 10kg Bohar Snapper, a big bluefin and a very good sized GT. 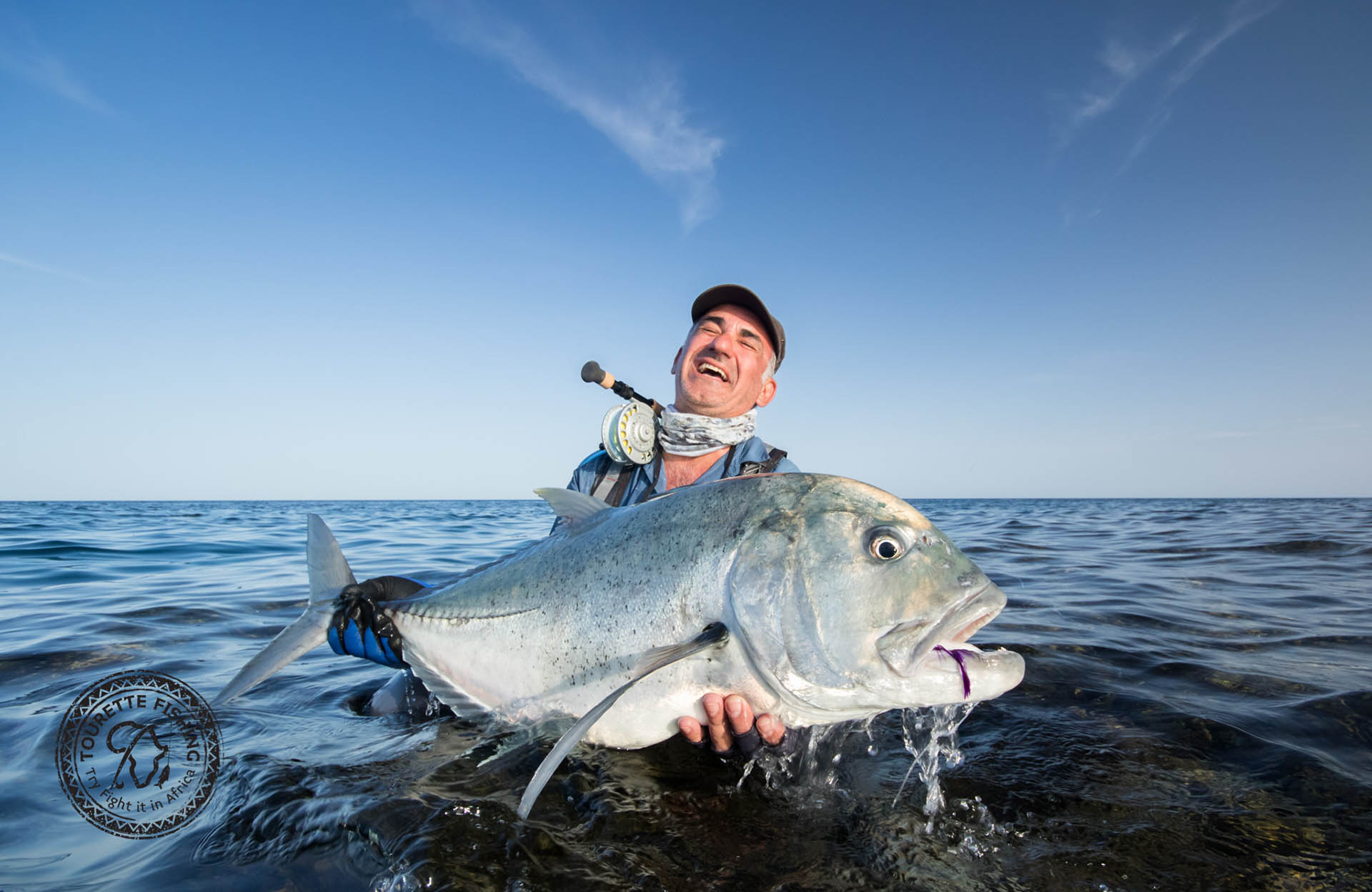 Happiness is a flats GT

After finishing the first day on a high, the guys were super amped to get cracking on Day 2. Unfortunately the bad weather predicted for the second half of the week came early and by dawn of Day 2, it was thumping already and did not look like it was about to die down any time soon either.
Regardless, one boat headed to the Playstation while the other boat headed back to the Big Island for the day.
We found some triggers but the drop in air-pressure really put them off the feed. Most of them showed zero reaction to the fly and by midday the flats were fishless.
We resorted to teasing for the rest of the day but with the frontal system moving in fast, it was clear that we were out of luck. We could see GT’s, bluefin and even boar snapper free swimming in the blue water but they did not react to either the tease or the fly.
Luckily, Platon managed to save the day and convinced one small bohar snapper to eat his fly, bringing an extremely windy and frustrating day to an end.

Over the course of Day’s 3, 4, and 5, the wind shifted gears and came howling even stronger out of the north, reaching speeds of up to 35-40knots. 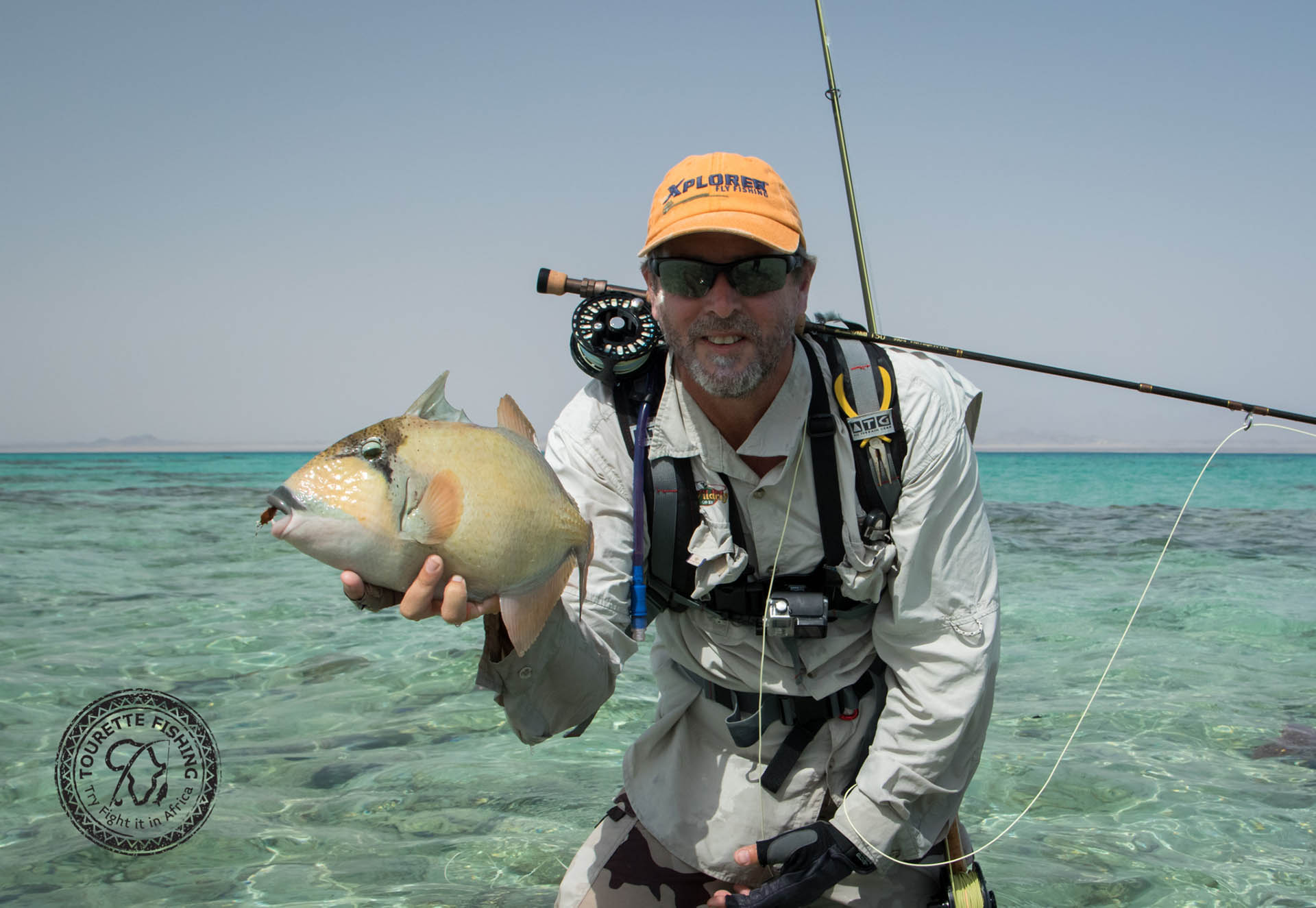 Needless to say the fishing came to a halt. We had to take shelter in the lee of the one Island, as the sea became dangerously rough. We did, however, manage to sneak in some fishing here and there, when the wind and seas allowed, and got rewarded nicely. John and Richard both landed some really nice bohar snapper on the tease, as well as a good 85cm GT , two more that wrecked some fly lines, and some big bluefin trevally.

Luckily the weather Gods decided to smile on us on the final day of the week and we got treated to a nice calm atmosphere and a very beautiful sunrise. The wind was still blowing but after days of 35 – 40 knot winds, a day with 5 – 10 knot wind felt like glassy conditions. One could almost feel the excitement around the breakfast table.
Both boats headed back to the Big Island for the day, one headed to the northern section while the other headed for the southern edge. 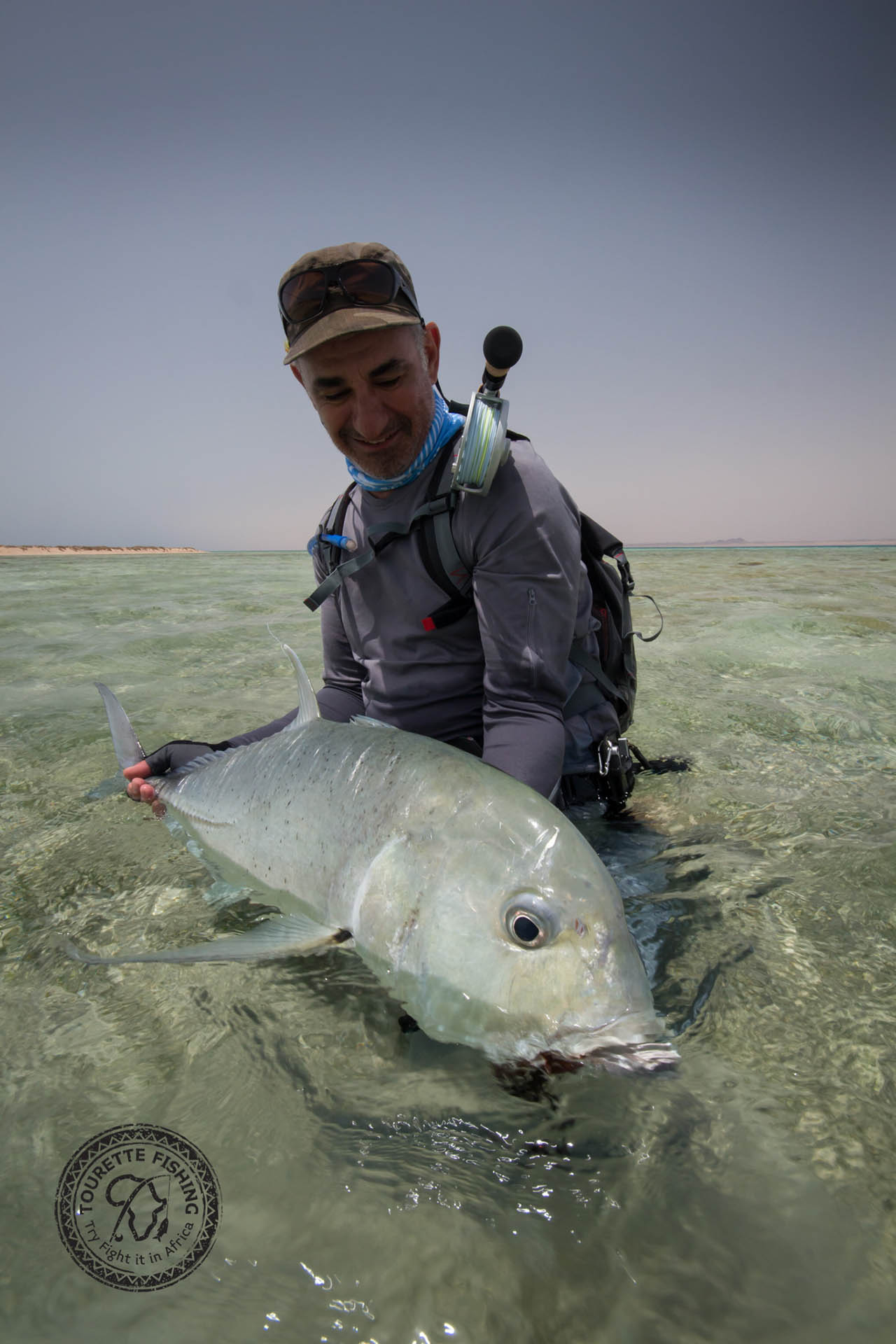 Platon finishing off the week with a solid Nubian Flats GT

The day started off slow but it did not take long before the flats were alive with triggerfish tailing into the distance while the bluefin and giant trevally gangs harassed anything that was small and swimming.
Platon went straight into a small GT and followed it up immediately after with a 85cm GT on the flat, before hooking into some nice yellow-margined triggerfish.
In the meantime John and Richard were bringing the heat to the fish as well. Both managed a number of really nice bluefin trevally with the latter also landing a very nice titan triggerfish. Unfortunately John was having no luck with the triggerfish. He had a number of fish follow his fly all the way to the rod tip, and when he finally managed to hook into a really big yellow margined triggerfish the hook pulled before the guide could land it.
All in all the weather, again, made the going quite tough this week but in the end it was still a great week with a really great group of guys.

Hopefully the weather Gods will smile on us this week but only time will tell.

That’s it for this week but check in soon for another update from the Nubian Flats.