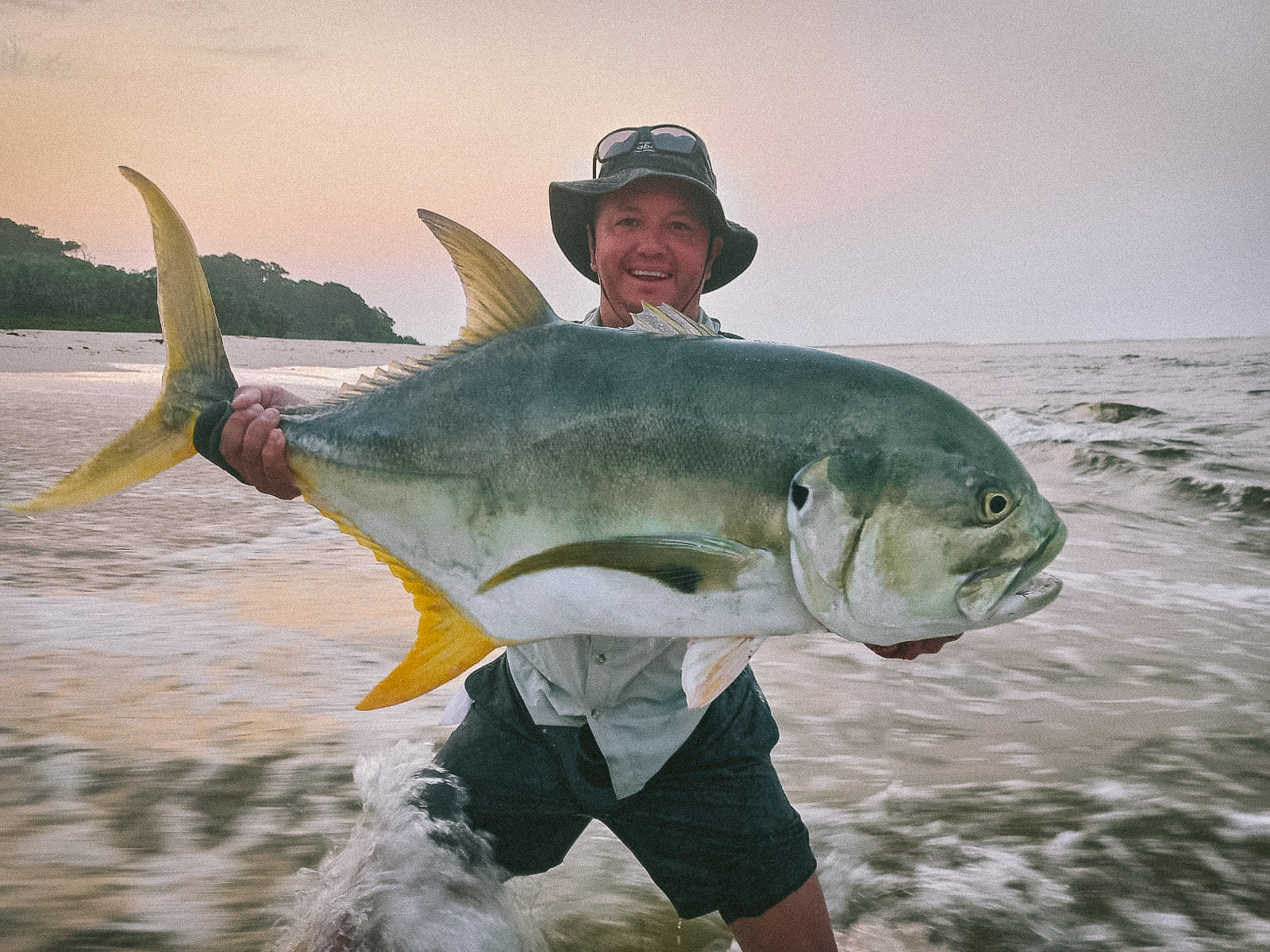 Baselines always shift, but Sette Cama has a habit of completely going above the normal standards. We unfortunately only had one day of rain which I would of termed as hard rain, apparently it was but a drizzle. The fishing was unbelievable, yet still apparently slow. This place goes above and beyond.

This week we had the Sprong Group which comprised of nine accomplished South African saltwater anglers that have been to Setta Cama before. Their experience in local waters back home definitely allowed them to get some spectacular fish even in trying conditions. To give you an idea the jacks on the black board in camp, which tallies the weeks catches, just had an infinity symbol next to it.

With so much happening in the space of just one week, it is hard to select what to highlight and what not to. Seeing that they are the ruler of the Gabonese coastline and the dream of every angler that visits Sette Cama, let’s start with the mighty tarpon. It didn’t take long into the week to discover a few spots in the surf zone that looked very promising. The anglers would be casting away and as the sun started to set, and splash the world with orange, you could sense the static in the air of the inevitable shock. Suddenly there were big, contorting shapes, jumping in between the waves, and silhouetting against the horizon. It didn’t take long before two tarpon were hooked&lost in quick succession, followed by a beautiful fish landed by Ernie. Several more fish were lost as the ink of night enveloped us. This pattern continued for the entire week. Many tarpon were lost, which is par for the course when targeting this species. 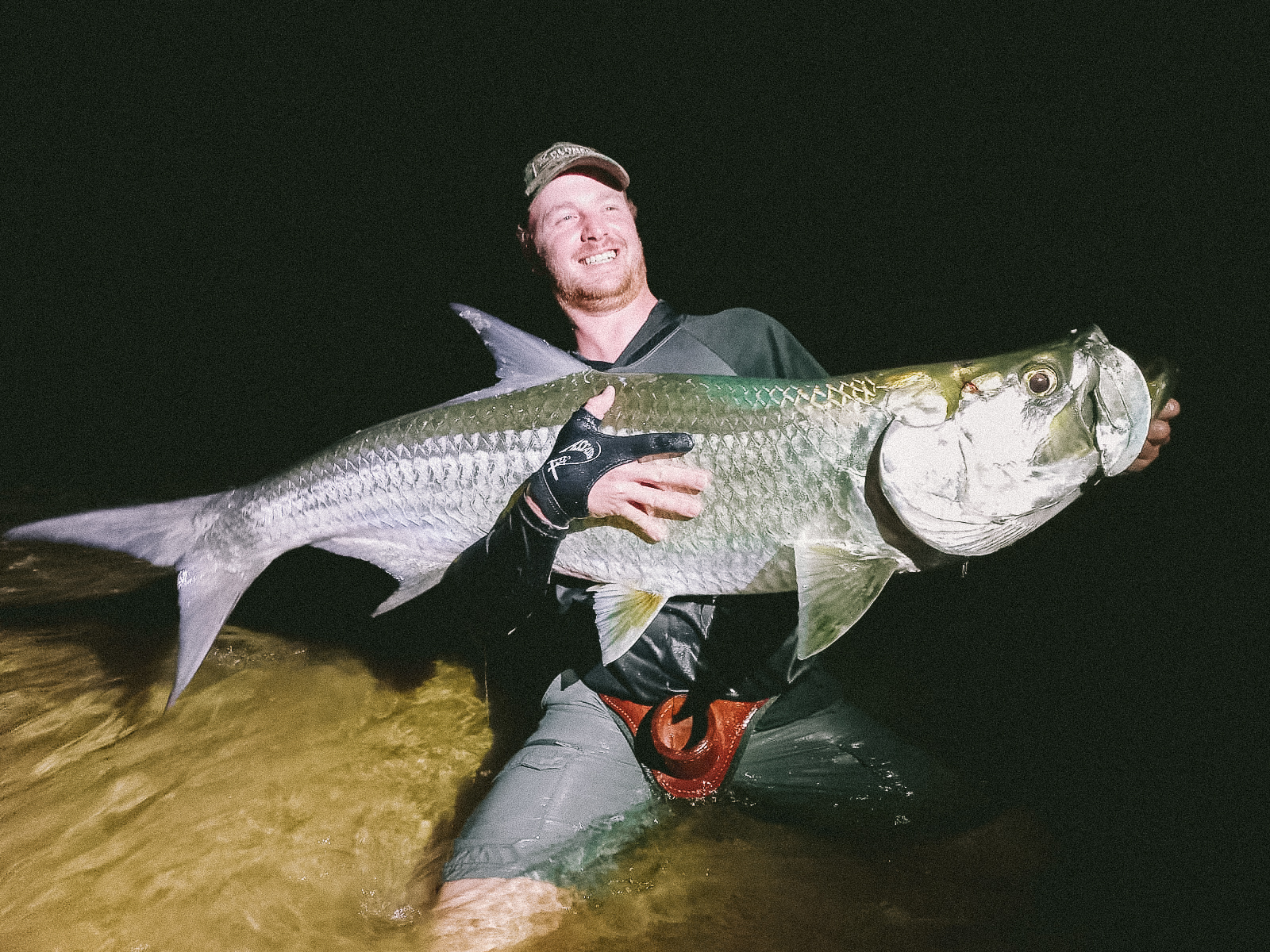 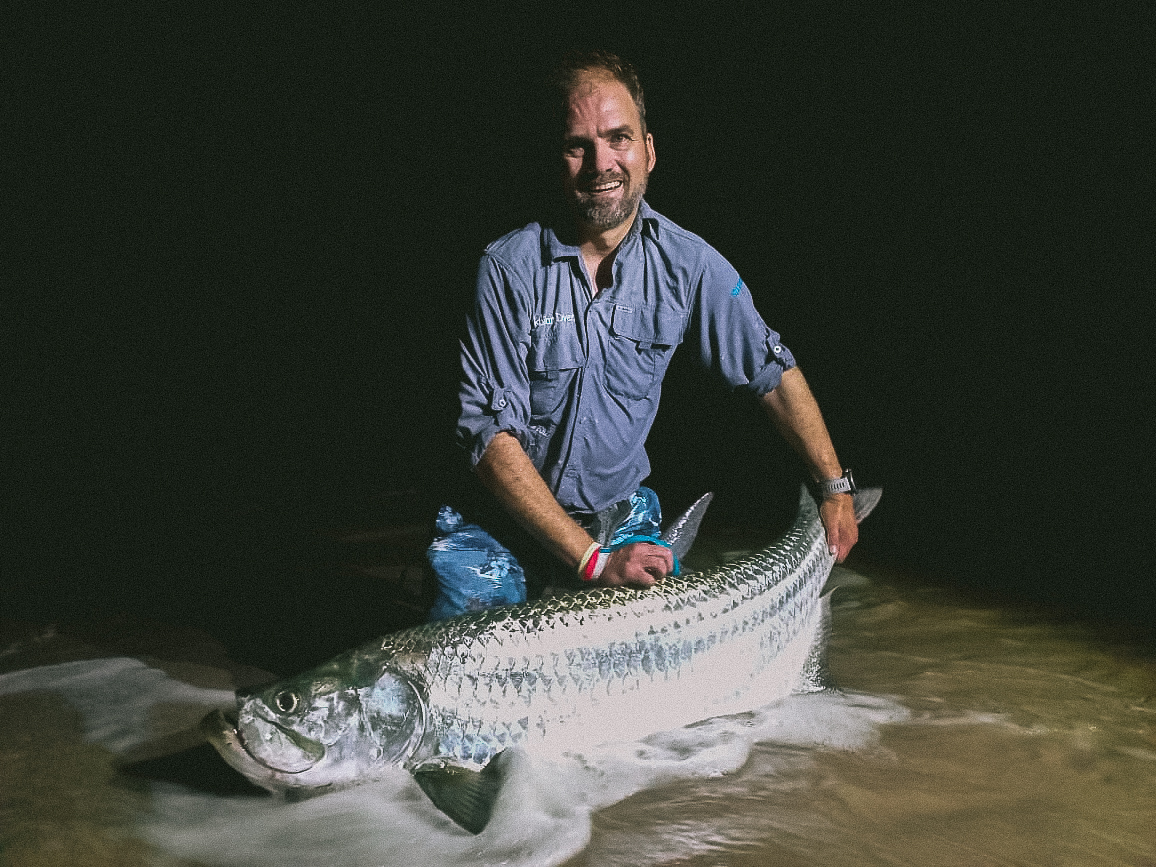 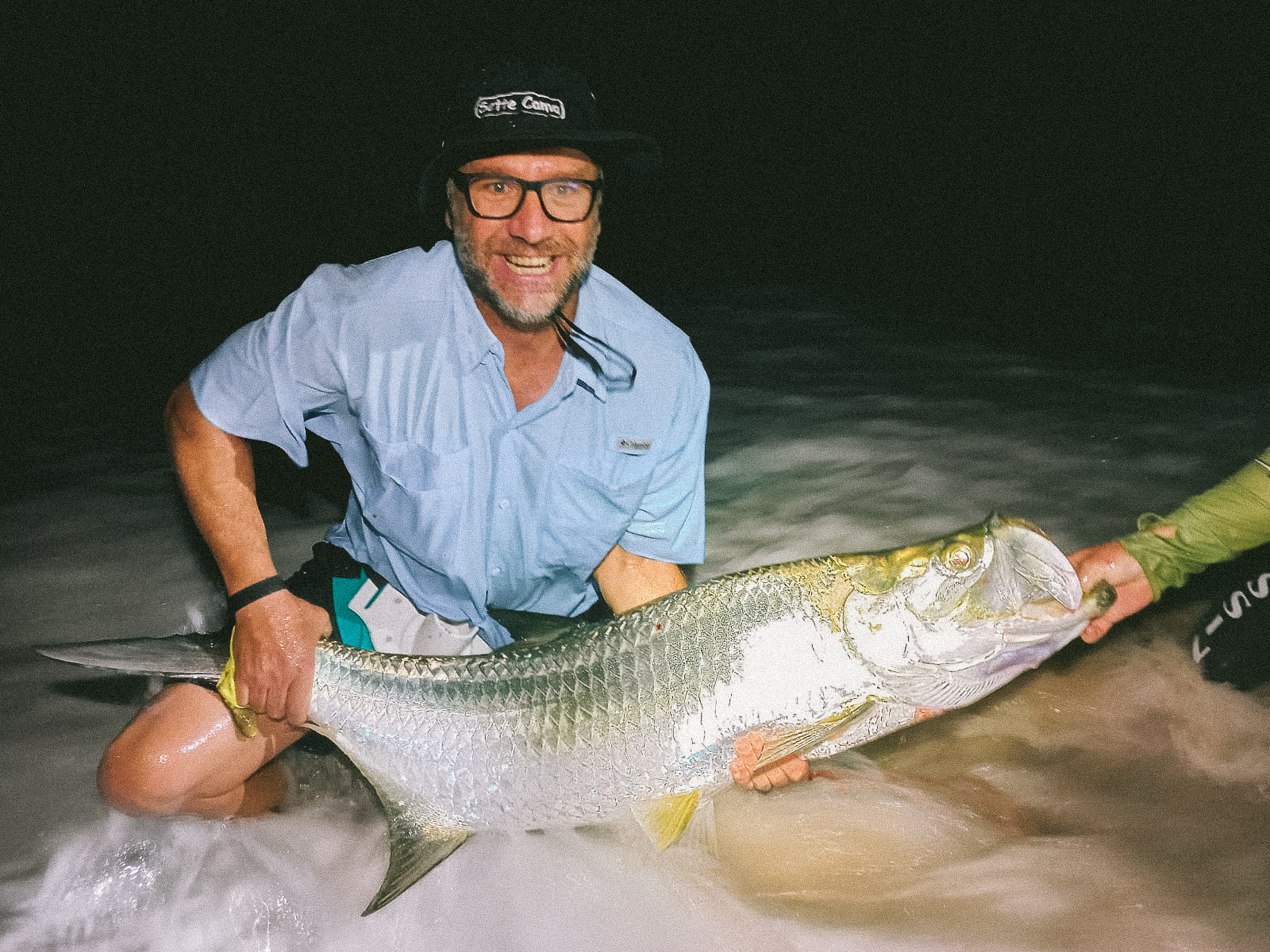 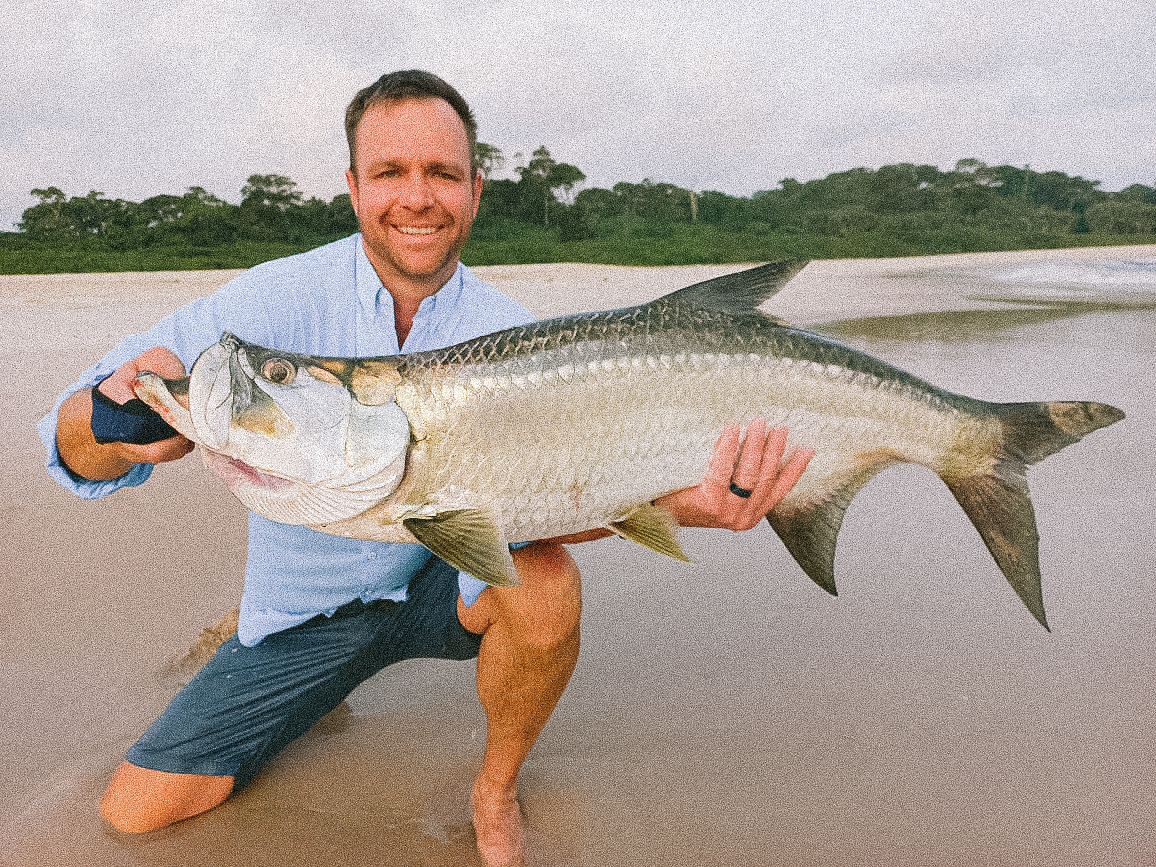 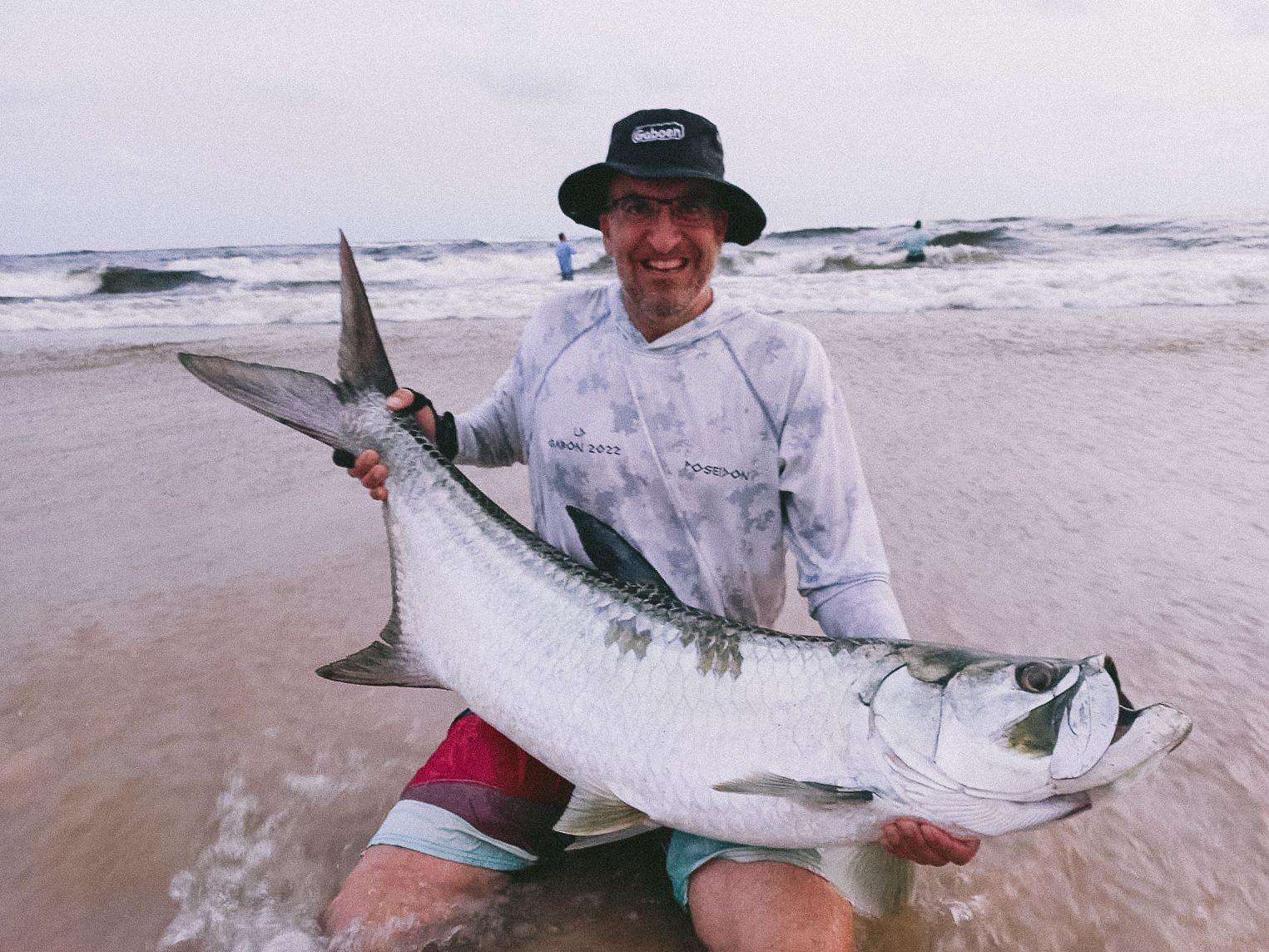 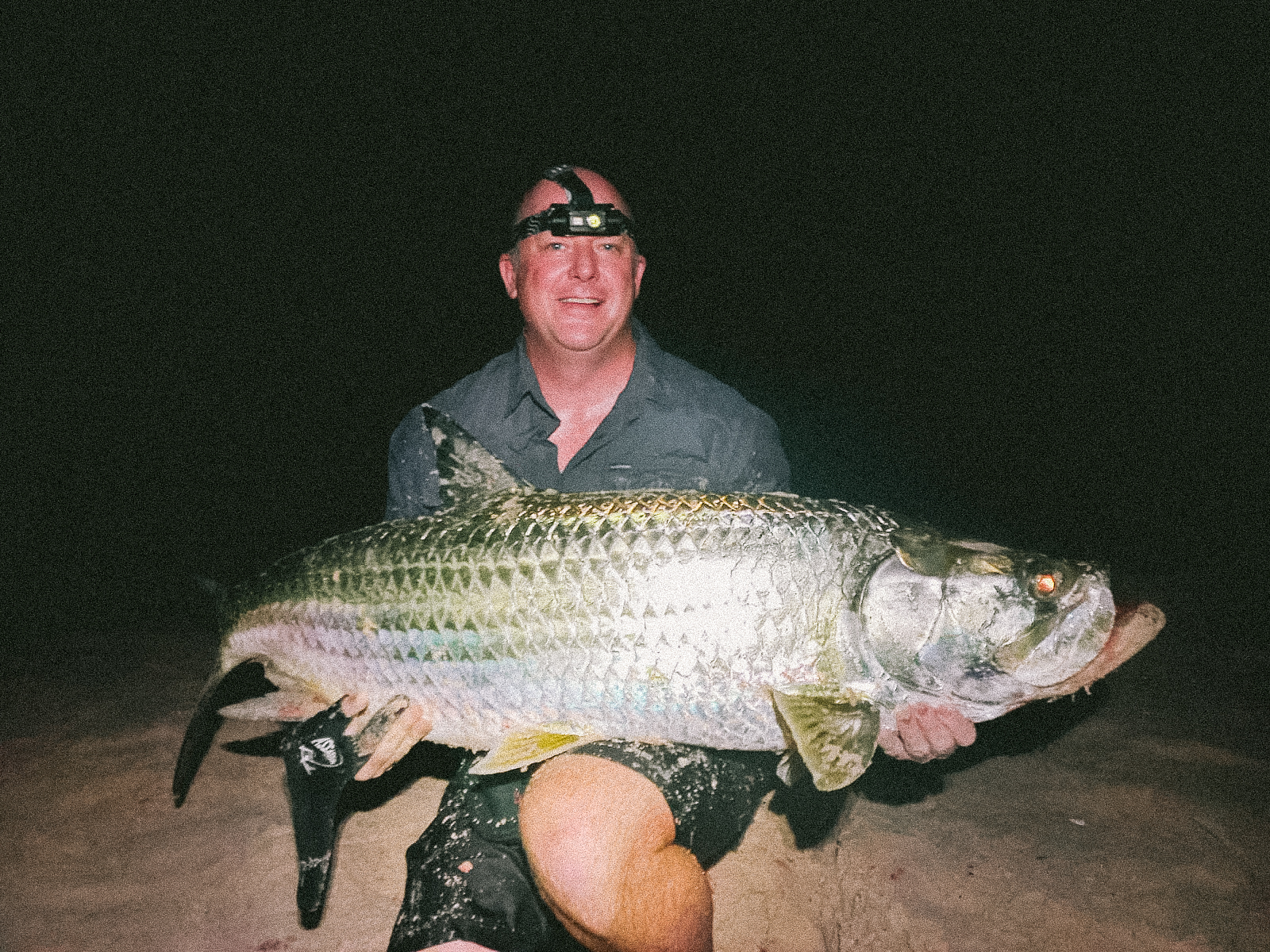 In between the hunt for the silverking, some proper cubera snapper, African giant threadfin, kob, and really big jack’s were landed. Both longfin and jack crevalle.

Another  unique catch that comes to mind is the West African liche/garrick landed by Ernie. These are a rare catch in this area but are quite common offshore here.

Two sessions I will remember for  the rest of my life are estuary sessions spent fly fishing the lagoon with father and son duo Willem and Des Fourie. Fishing is a beautiful thing, not only does it allow us to connect with nature and meet like-minded souls, it also has the power to strengthen existing bonds. Watching Des and Willem have endless fun and the camaraderie between family was special. There were times where if one of them was capable of throwing a third fly line we would have had triples up.

As usual we encountered a lot of wildlife on our daily commutes. Forest Buffalo and Forest Sitatunga also showed themselves on the river bank. The group undertook a forest walk through the jungle with one of the Parc National de Loango rangers. It’s a completely different world underneath the canopy and quickly makes one realize that humans aren’t made to survive easily in this environment. Saying that, the ranger points out a multitude of plants and trees which contain medicinal properties. It is something which is highly recommended for every group to experience.

The last evening blew my mind. Willem and Des found a shoal of marauding game fish in the twilight. Hundreds if not thousands of jacks were trying their best to remove every mullet out of the system. Mixed in were big barracuda clearing 6ft high jumps, and tarpon belly flopping in between. Such an incredibly sight. The show stopper however was Phil. He worked incredibly hard for a big fish all week and effort equals reward. After a dogged fight, a gorgeous yet still scary looking cubera snapper came to shore. This spectacular fish we estimated at around 35kg and ended the week off on a perfect note.

Another incredibly week in the paradise of Gabon, and still so many surprises in store. 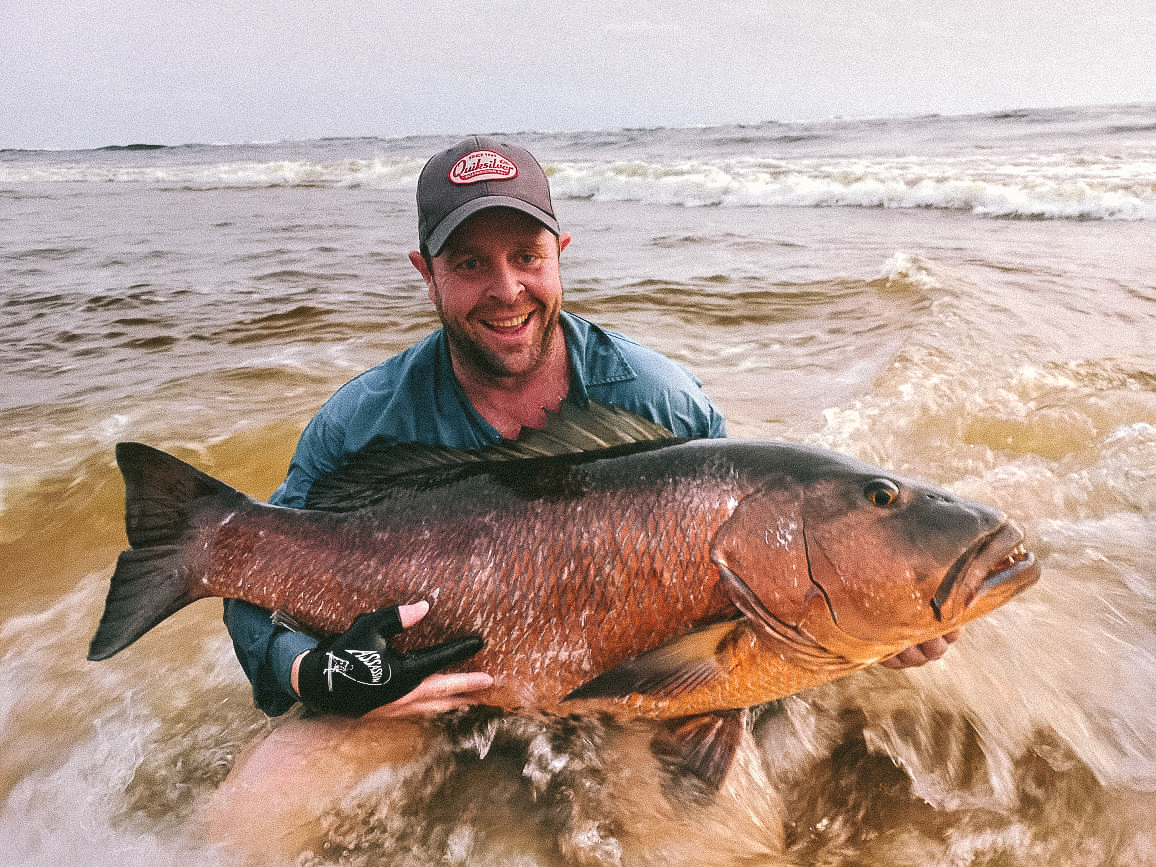 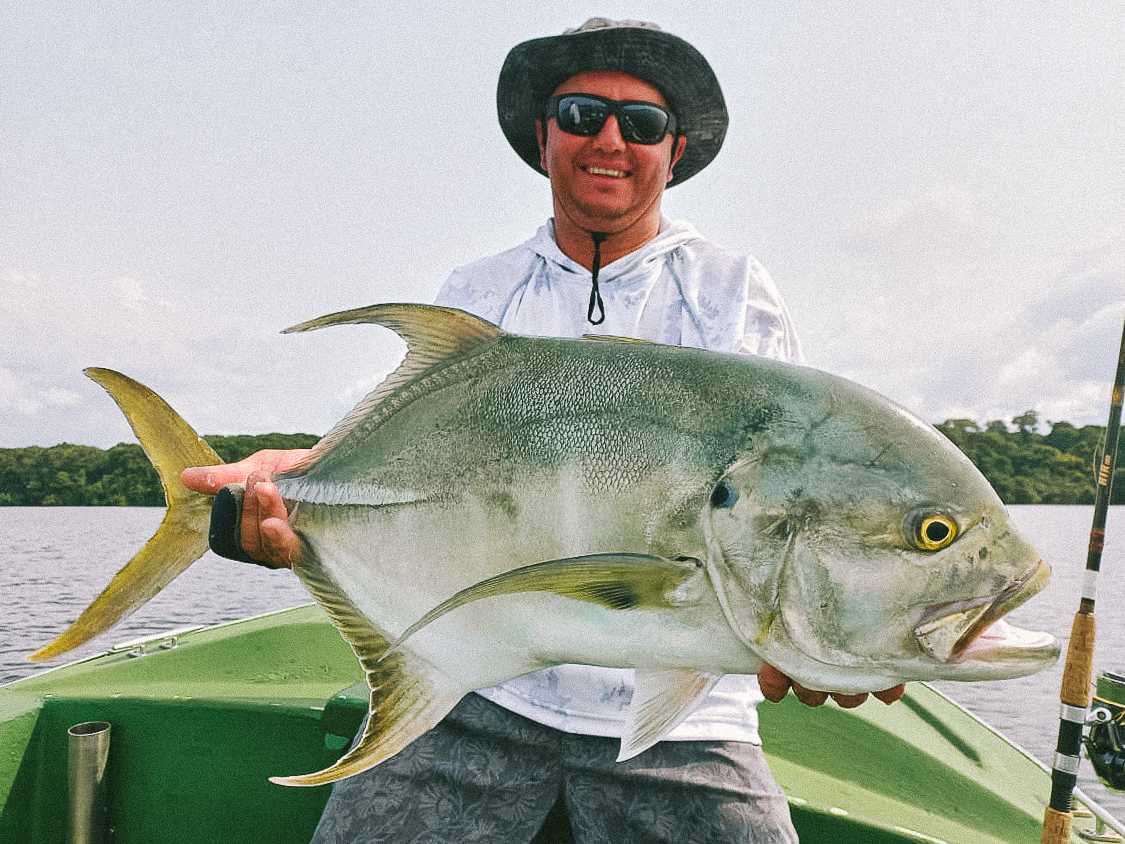 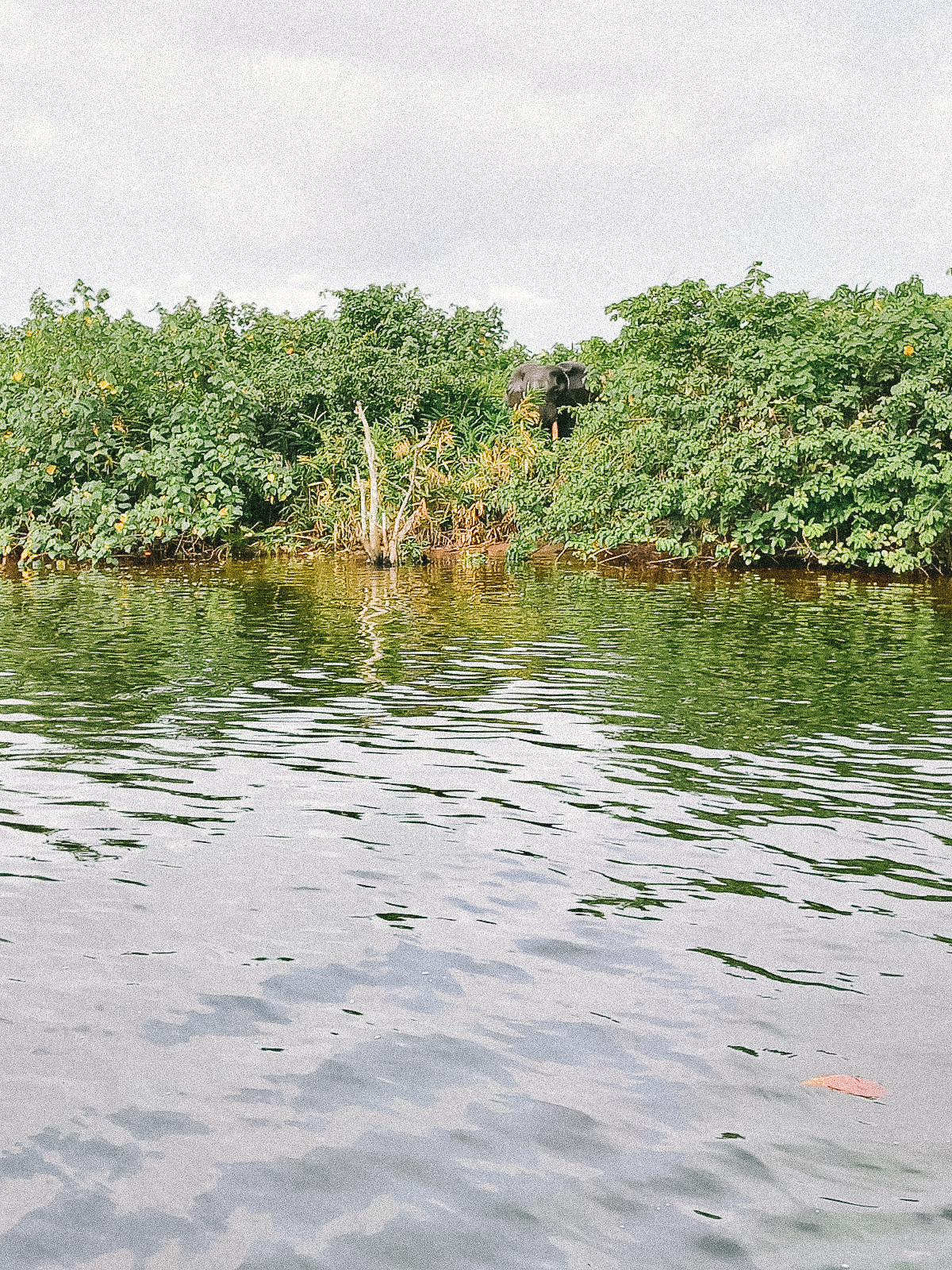 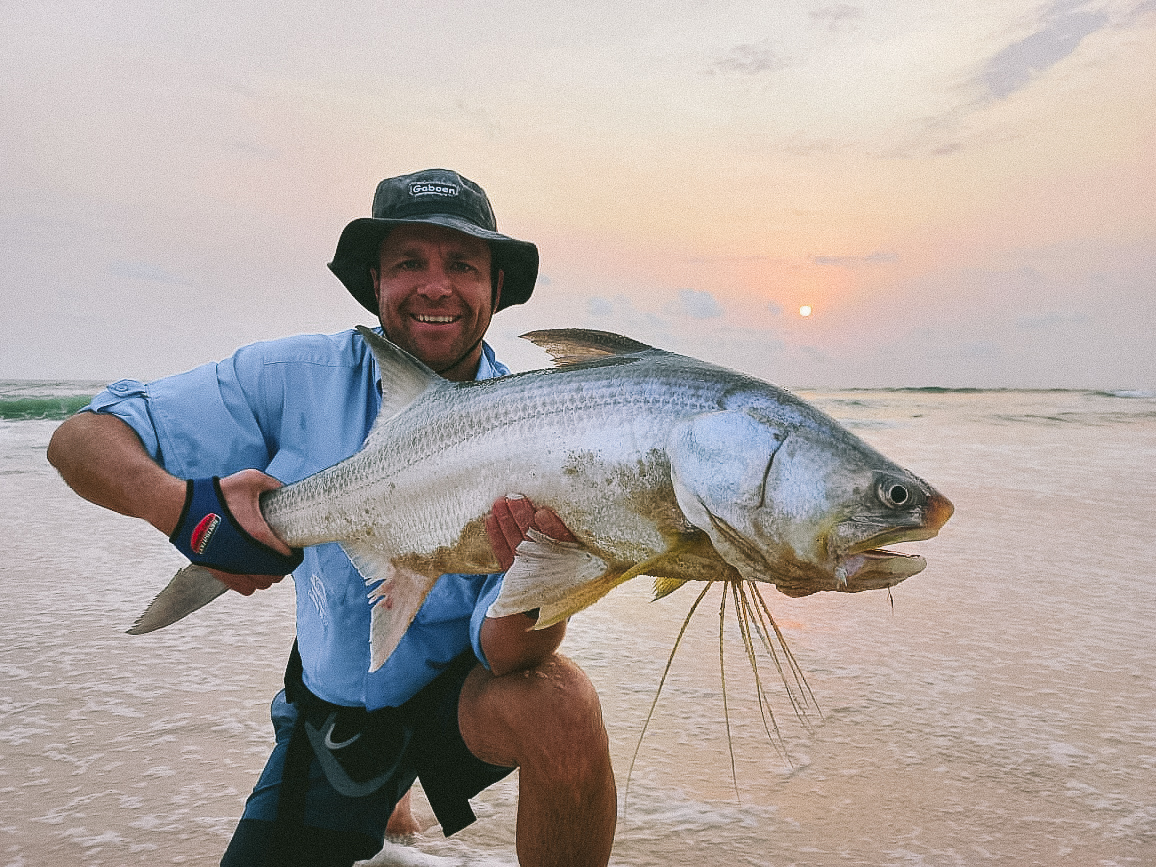 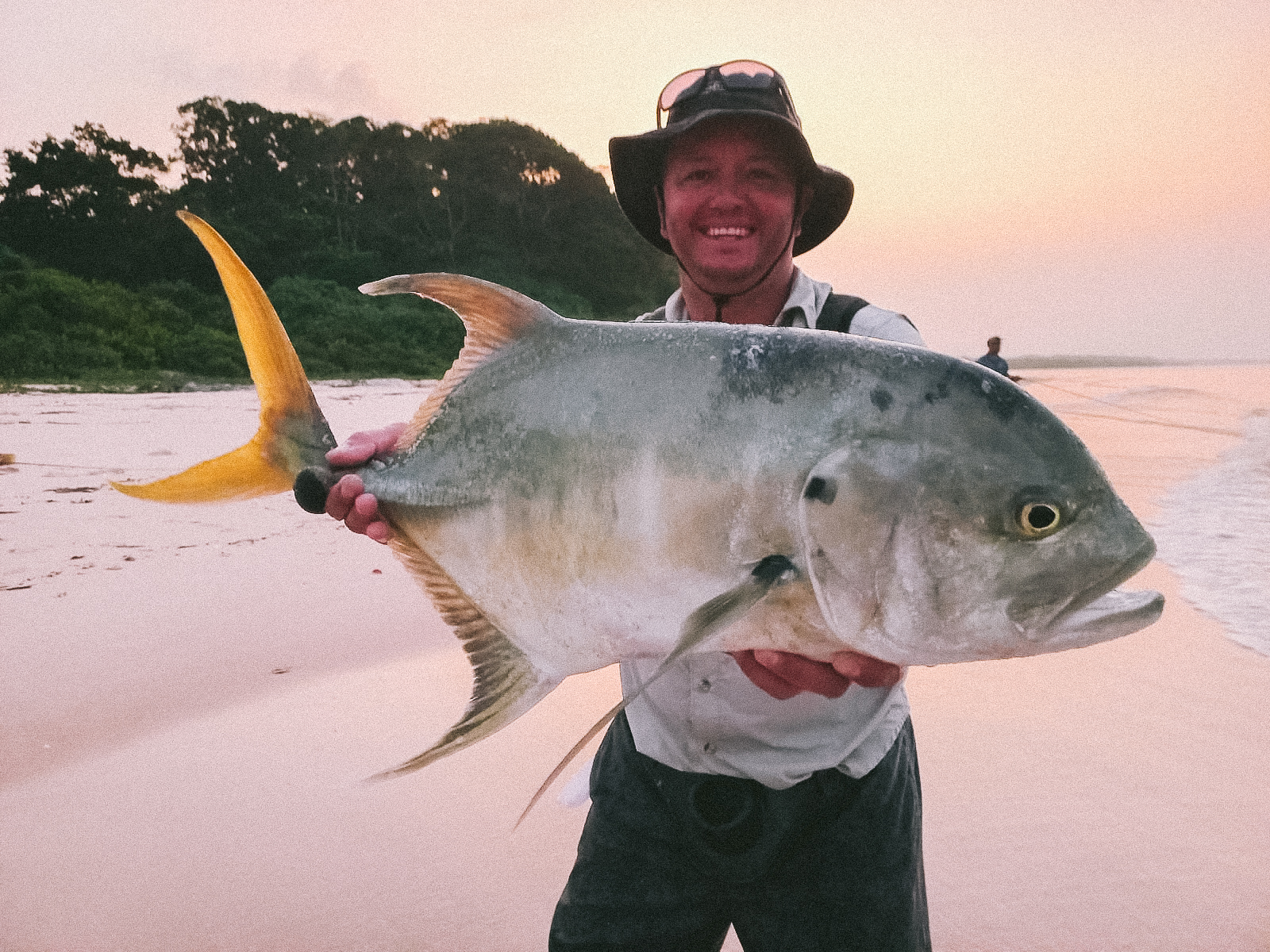 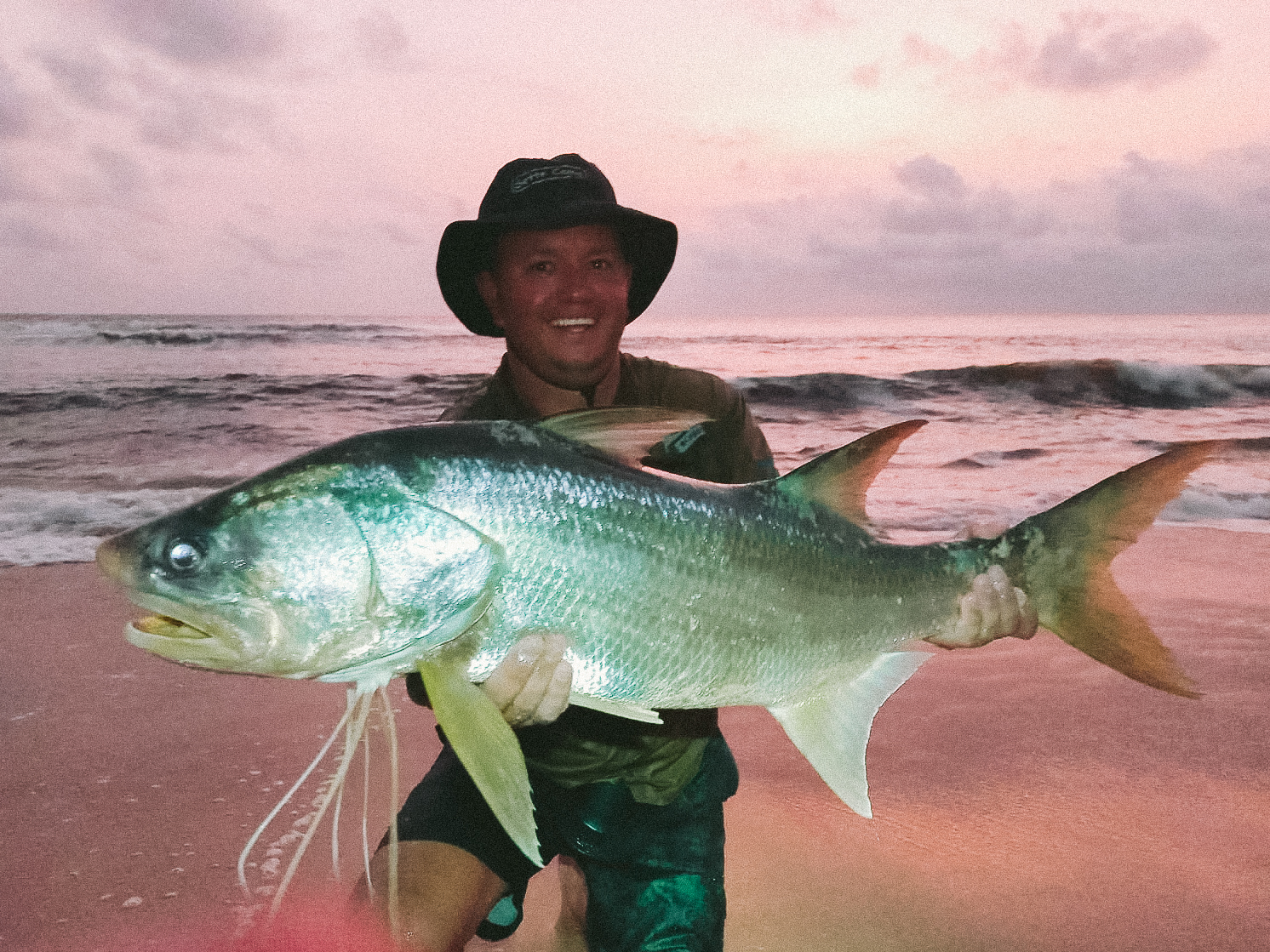 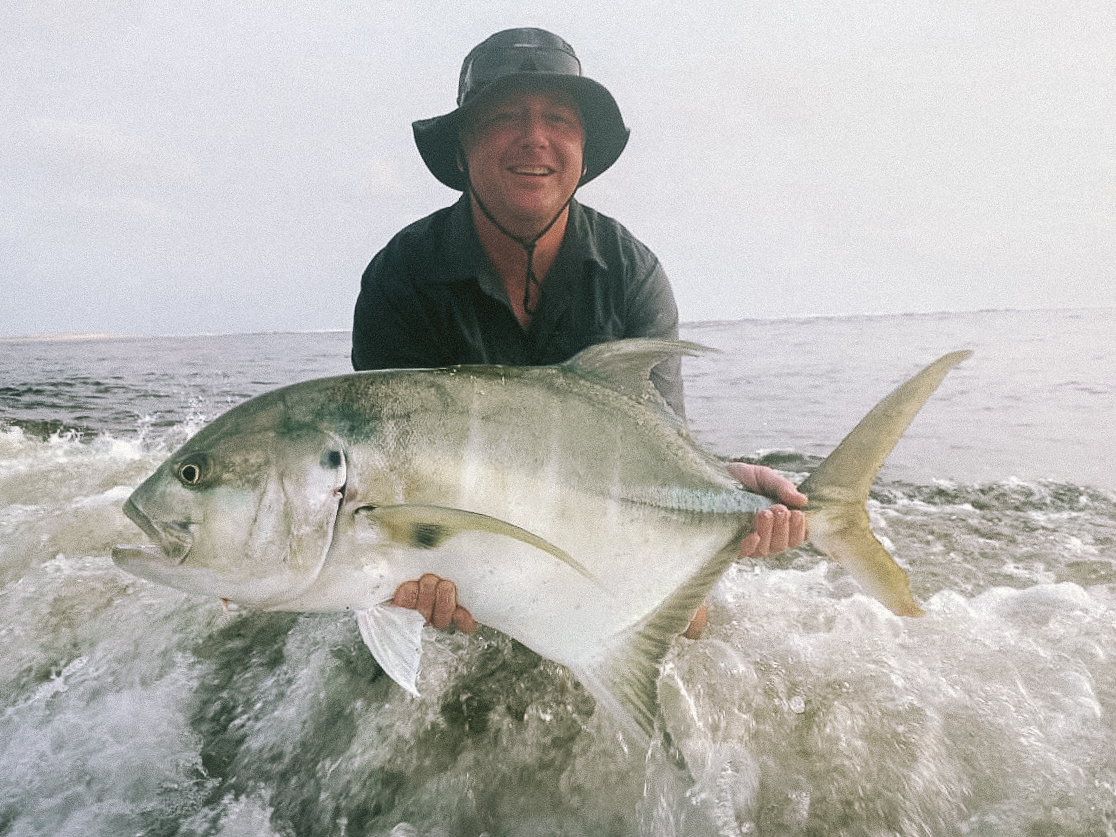 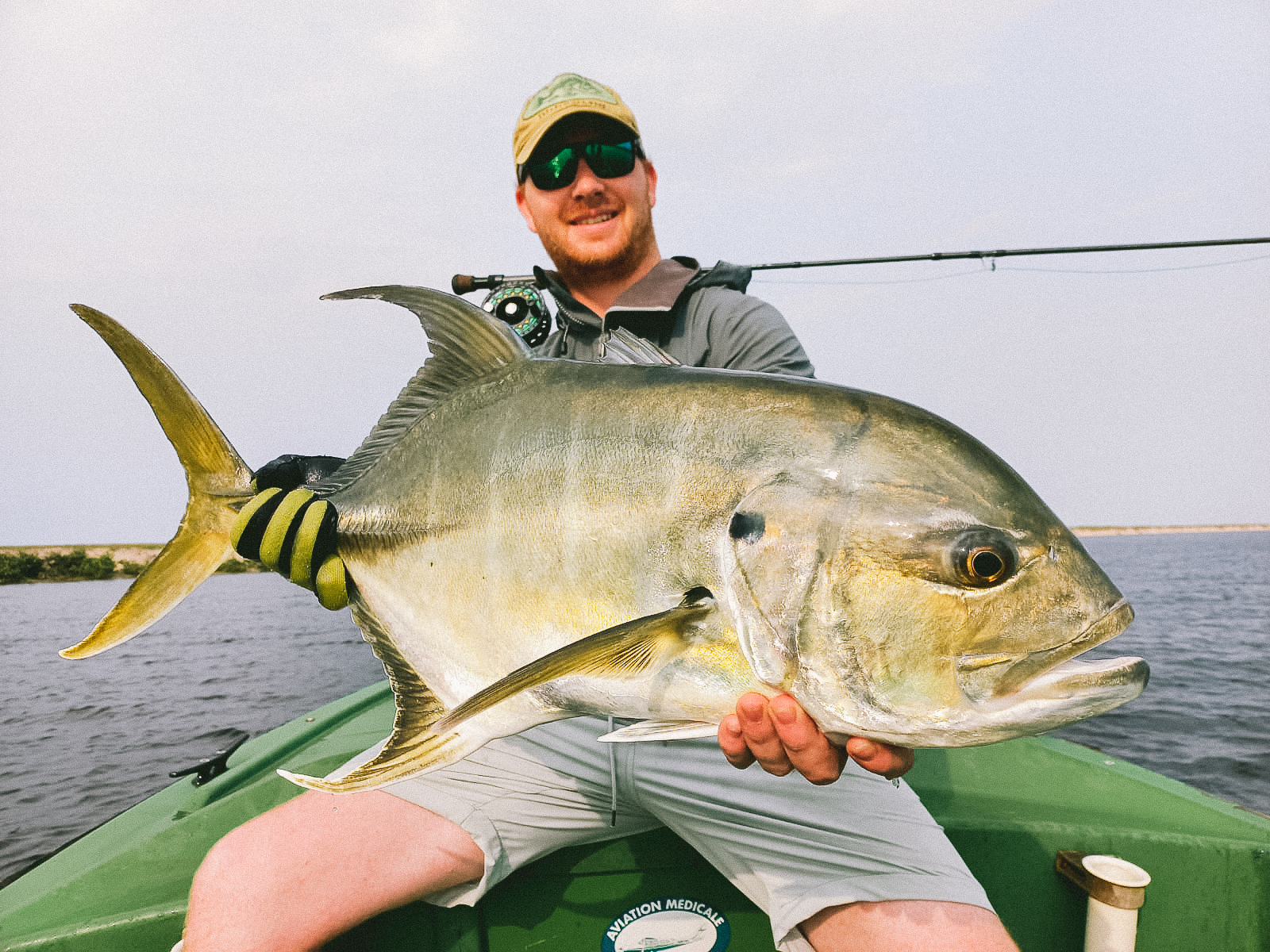 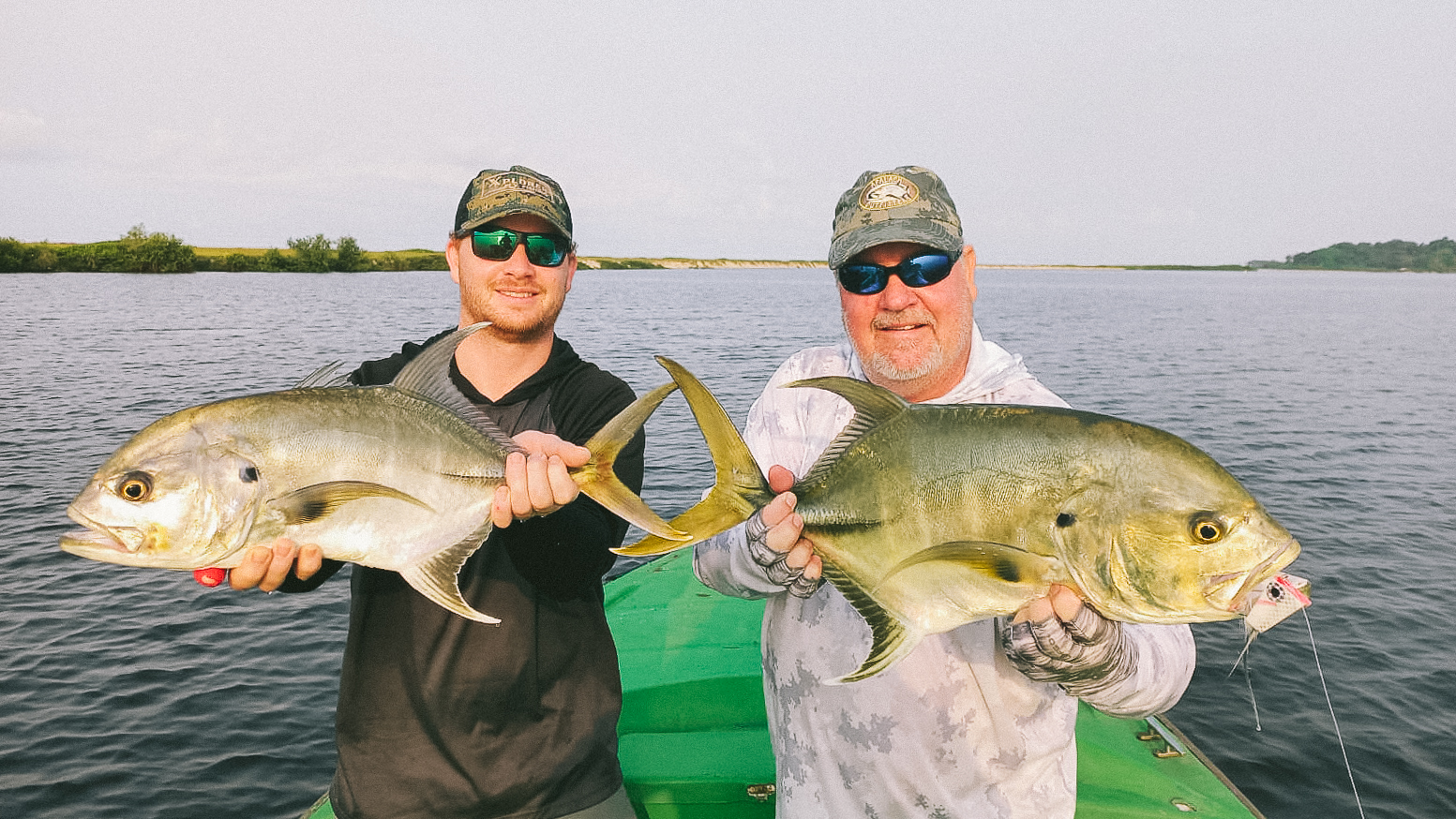 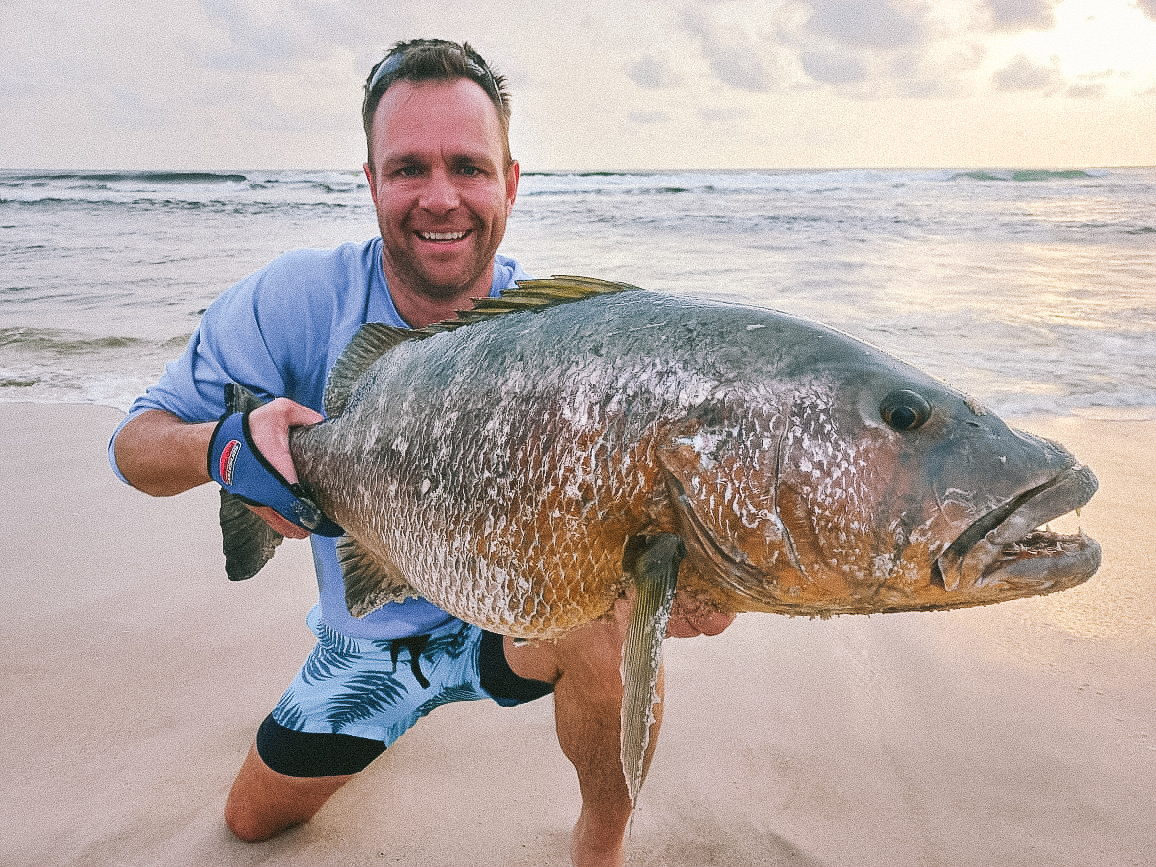 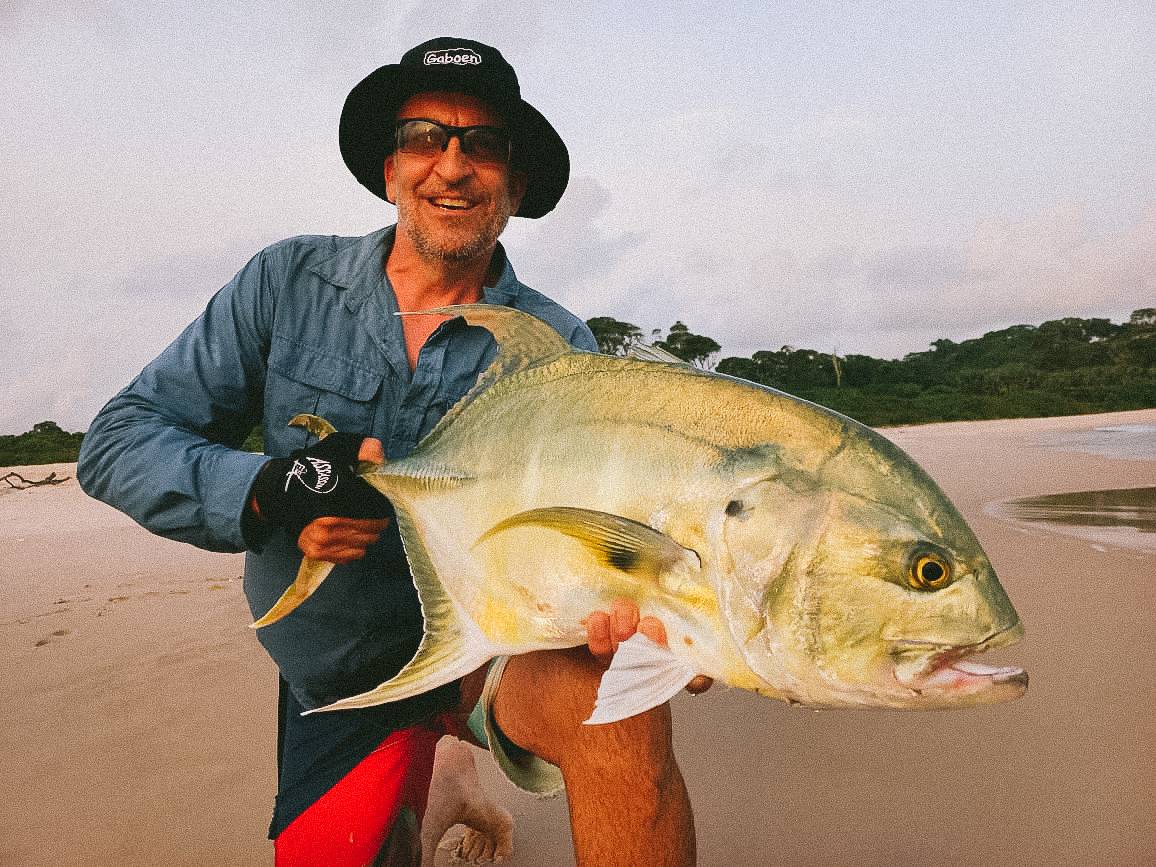 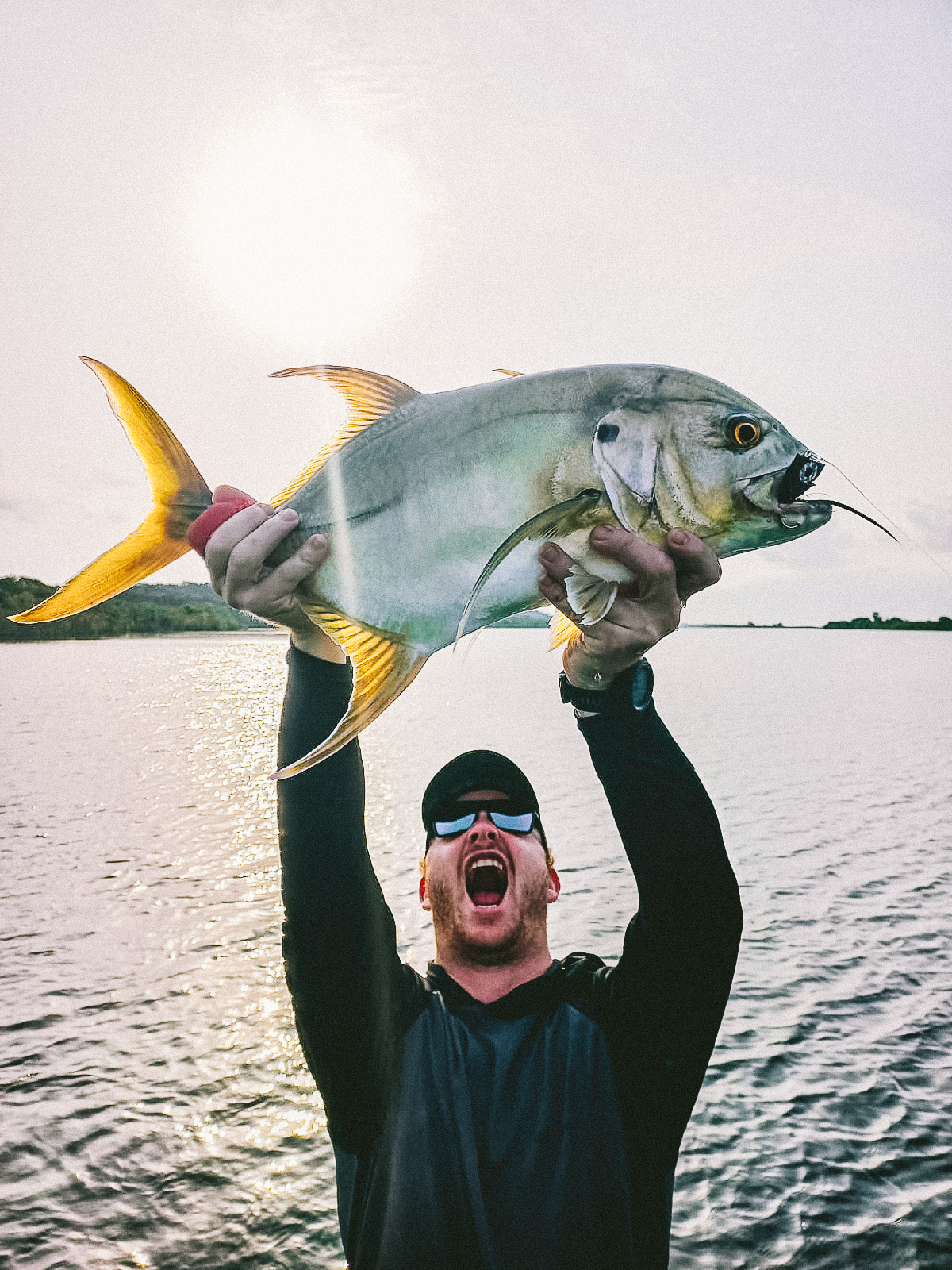 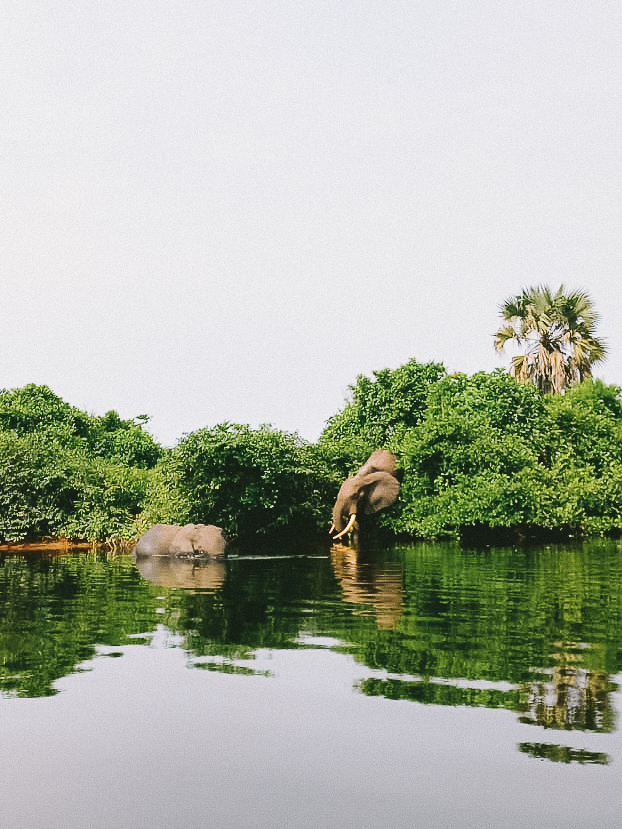 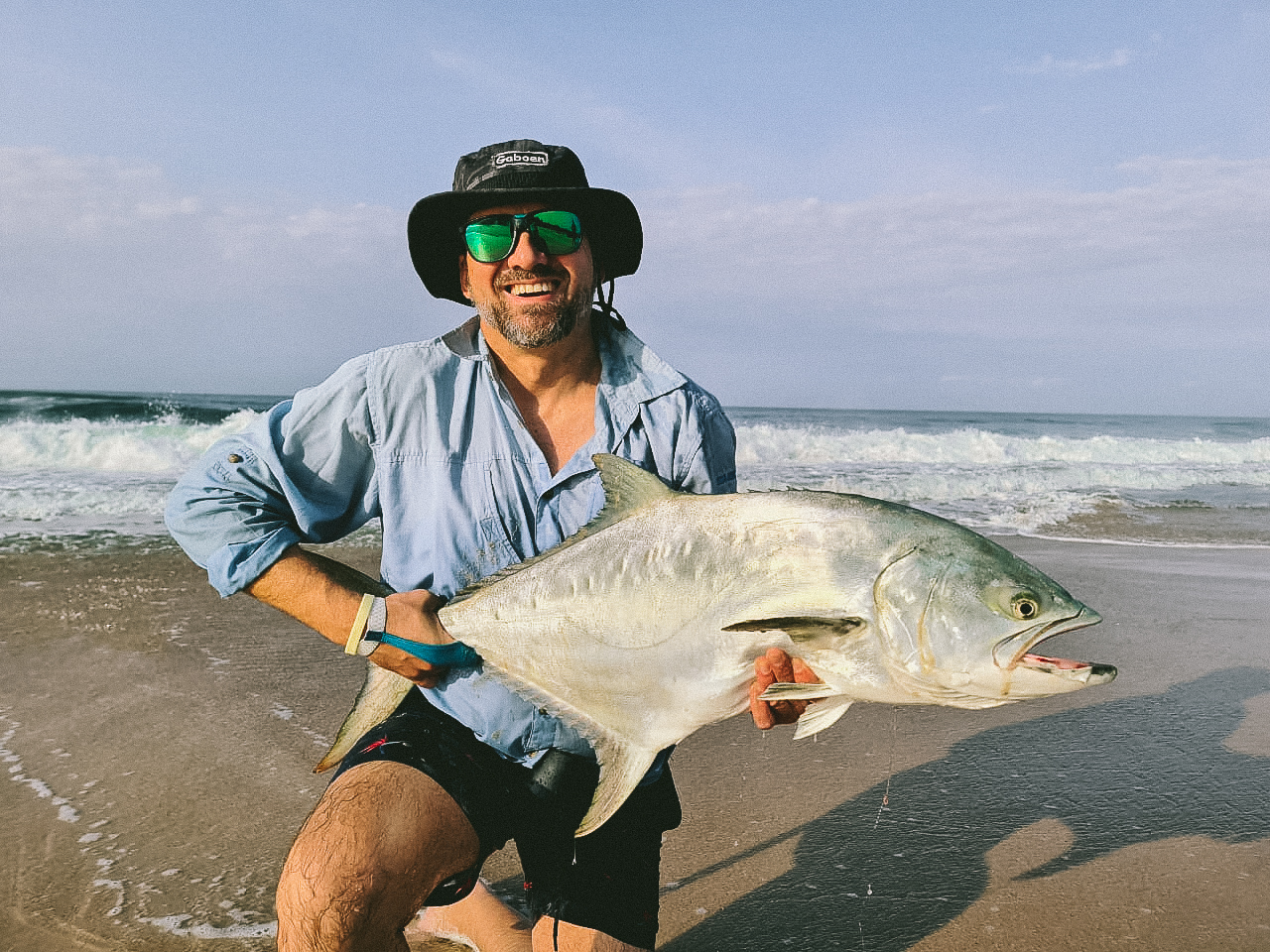 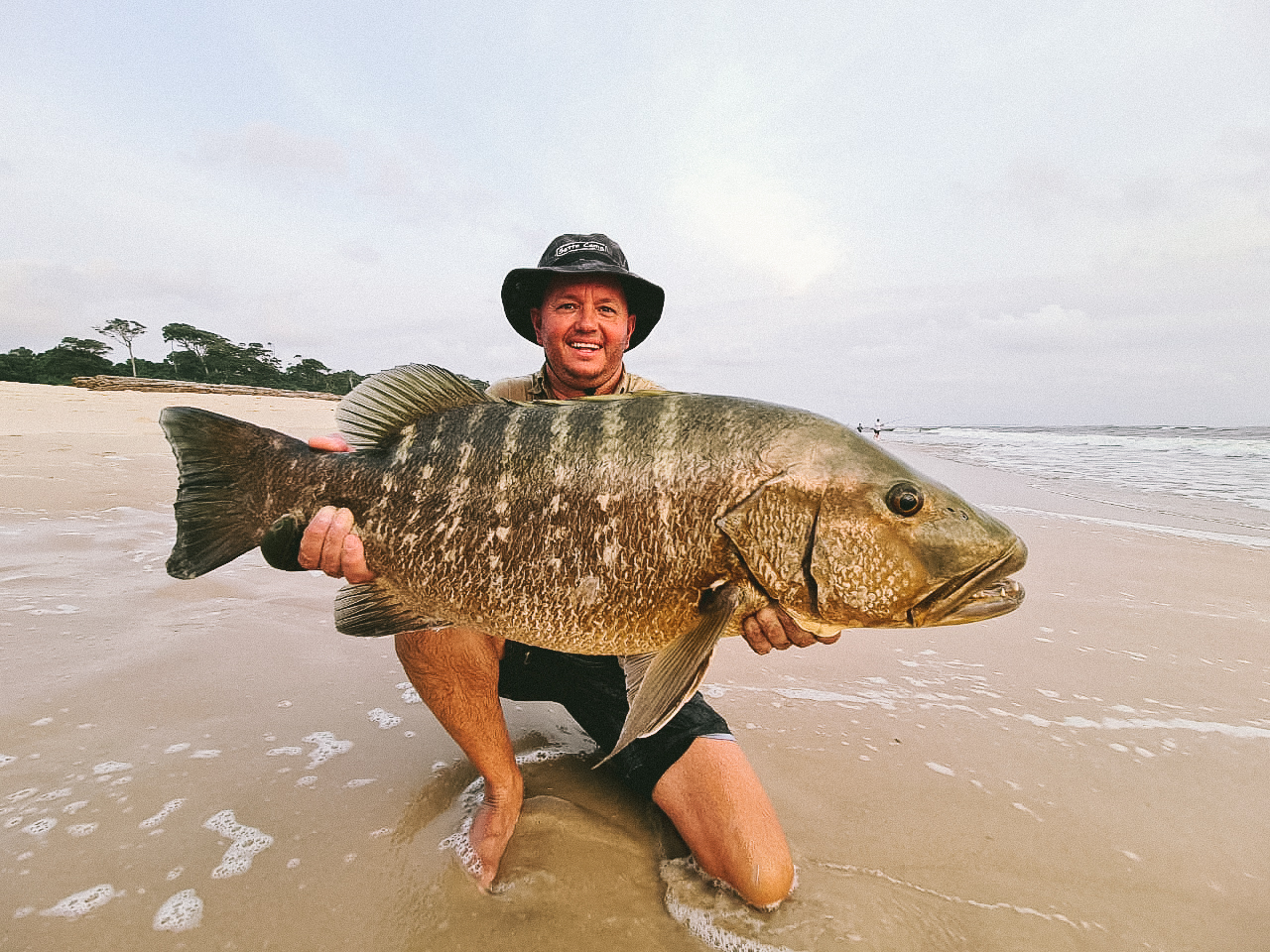 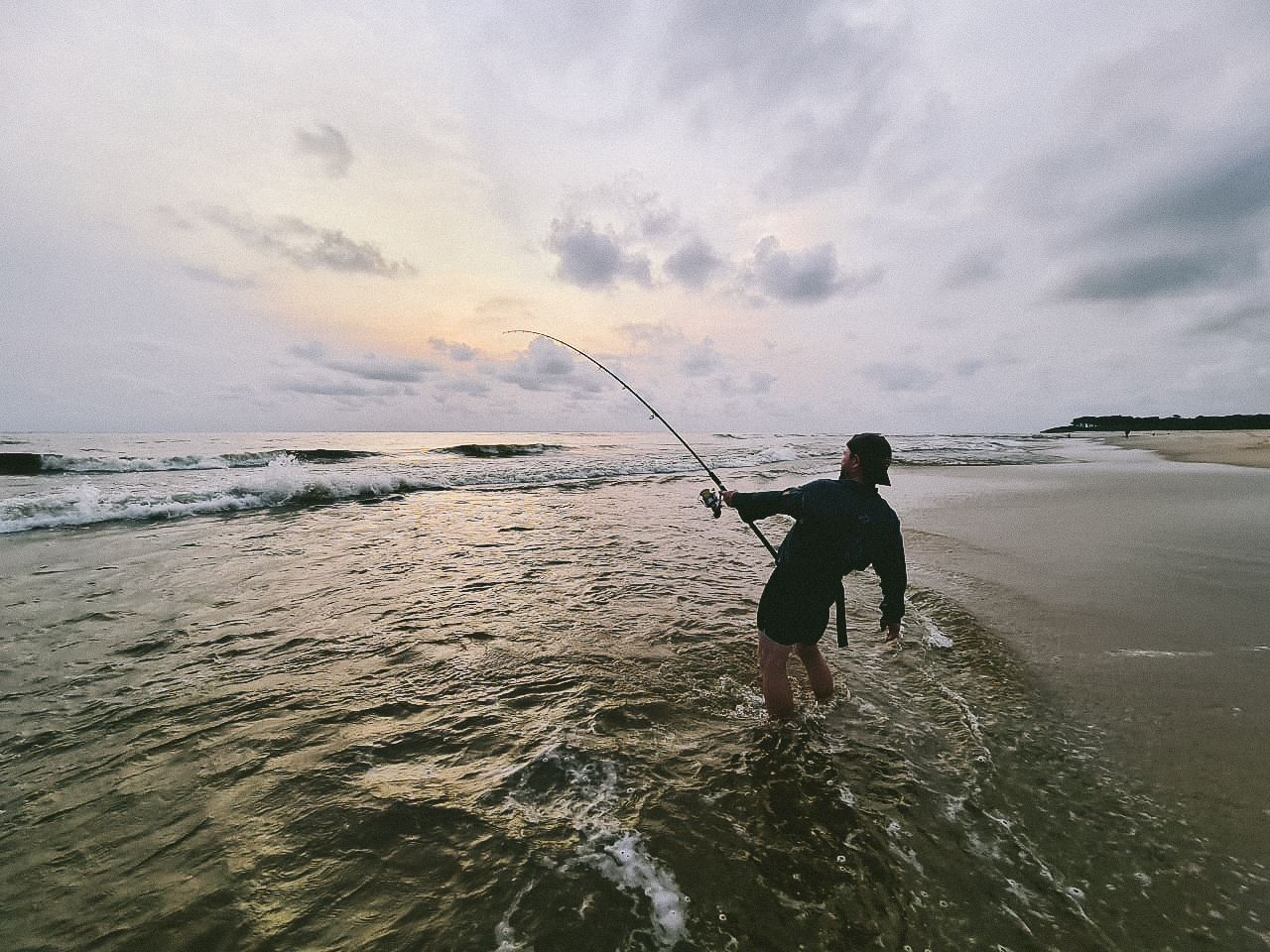