The guys arrived quite late in the day, so after a short briefing, we went through all the tackle setting up rods, and headed out for a quick evening session. The fishing was a little slow but by last light a small shoal of Jacks came into the surf. They stayed quite far out but we still managed to land a couple smaller fish leaving the guys eager for the early morning session.

The first morning we headed out at 4am to make the most of the last bit of the outgoing tide in the dark before the sun starts rising and the tide starts pushing back into the river. Fishing sinking stick baits and Orion Plugs slowly on the bottom, the guys concentrated and worked hard for the early morning snapper but to no avail. By first light though, we saw some tarpon rolling in the surf but the Jacks decided to crash the party as well. Eating most lures moving fast, they still preferred a 2oz Sea Iron spoon worked just above the bottom. Everyone got stuck into the frenzy and countless jacks were brought to the beach. Dave Bell really capitalised and landed 10 by himself in almost as many casts. 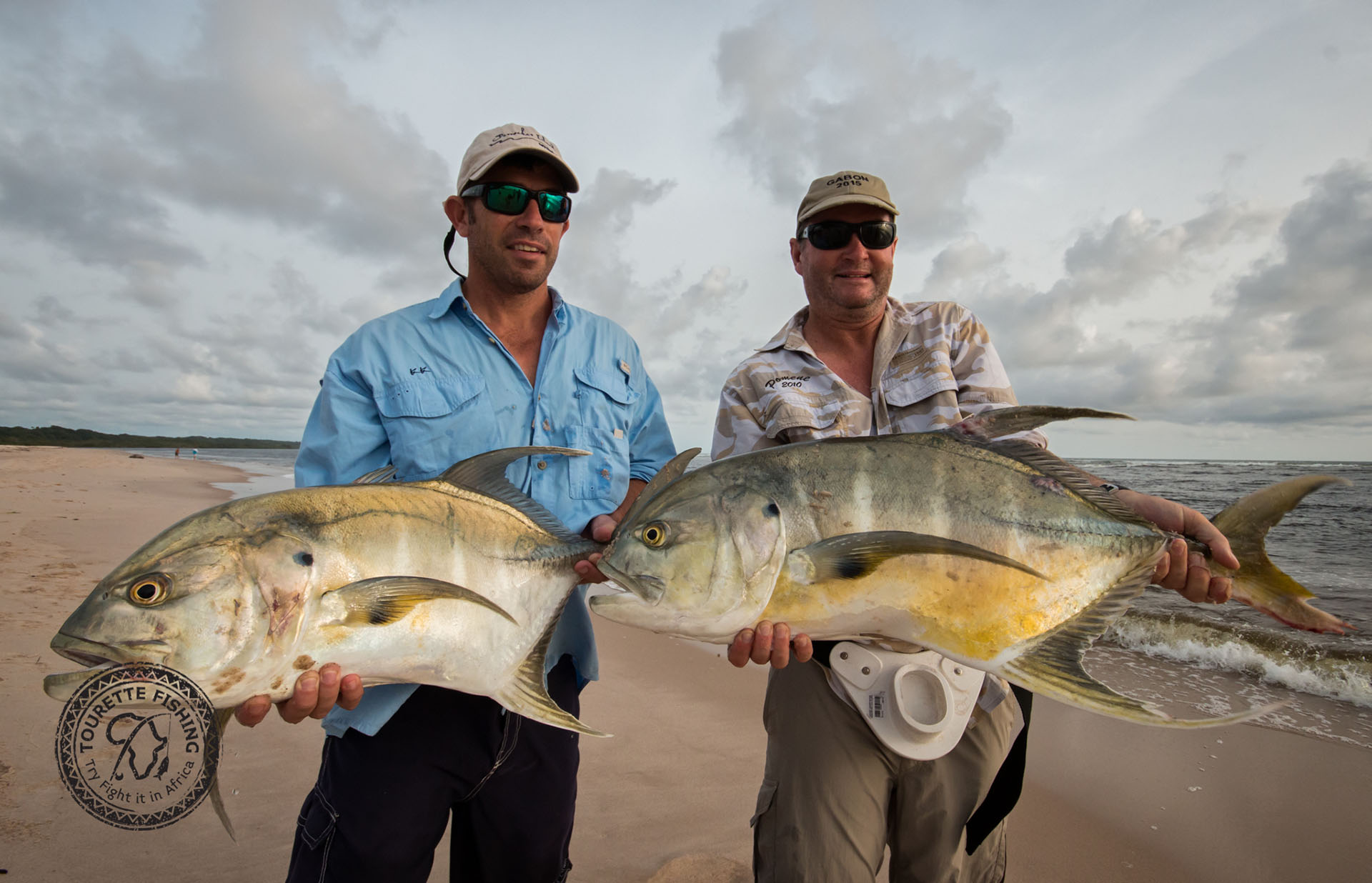 Kenneth(left) and Dave with one of many Jack Double Ups

By 9am the fish went off the bite and everyone headed back to camp for a well deserved breakfast and siesta before the evening session.

After an early dinner at 4:30pm, we headed back to the surf accompanied by heavy looking clouds and wind. Unfortunately the weather seemed to push the fish down and the guys managed to land only a handful of jacks and one nice cuberra snapper.

For the morning session on Day 2, the guys decided to split up. Guy and Jack headed to the surf while the rest of the guys opted for a slower start in the mangroves, targeting jack crevalle and juvenile snapper on light spinning outfits.

The mangroves fished well and plenty jacks were landed with some really big barracuda thrown into the mix as well. But the surf is where all the action took place.

From first light, thousands of tarpon came into the surf and all hell broke loose. Working the Goosestix Stickbaits slowly with long pauses, the guys got towed all over the beach by big tarpon. Cast for cast the guys were hooking and jumping fish in access of 80kg!! To make things even more interesting, in-between the Tarpon, massive shoals of Jacks were feeding on all the scraps, eating lures as they got thrown by the tarpon. Gabon firing hard!

The tarpon moved off after sunrise, sending the guys back to camp to go lick their wounds. 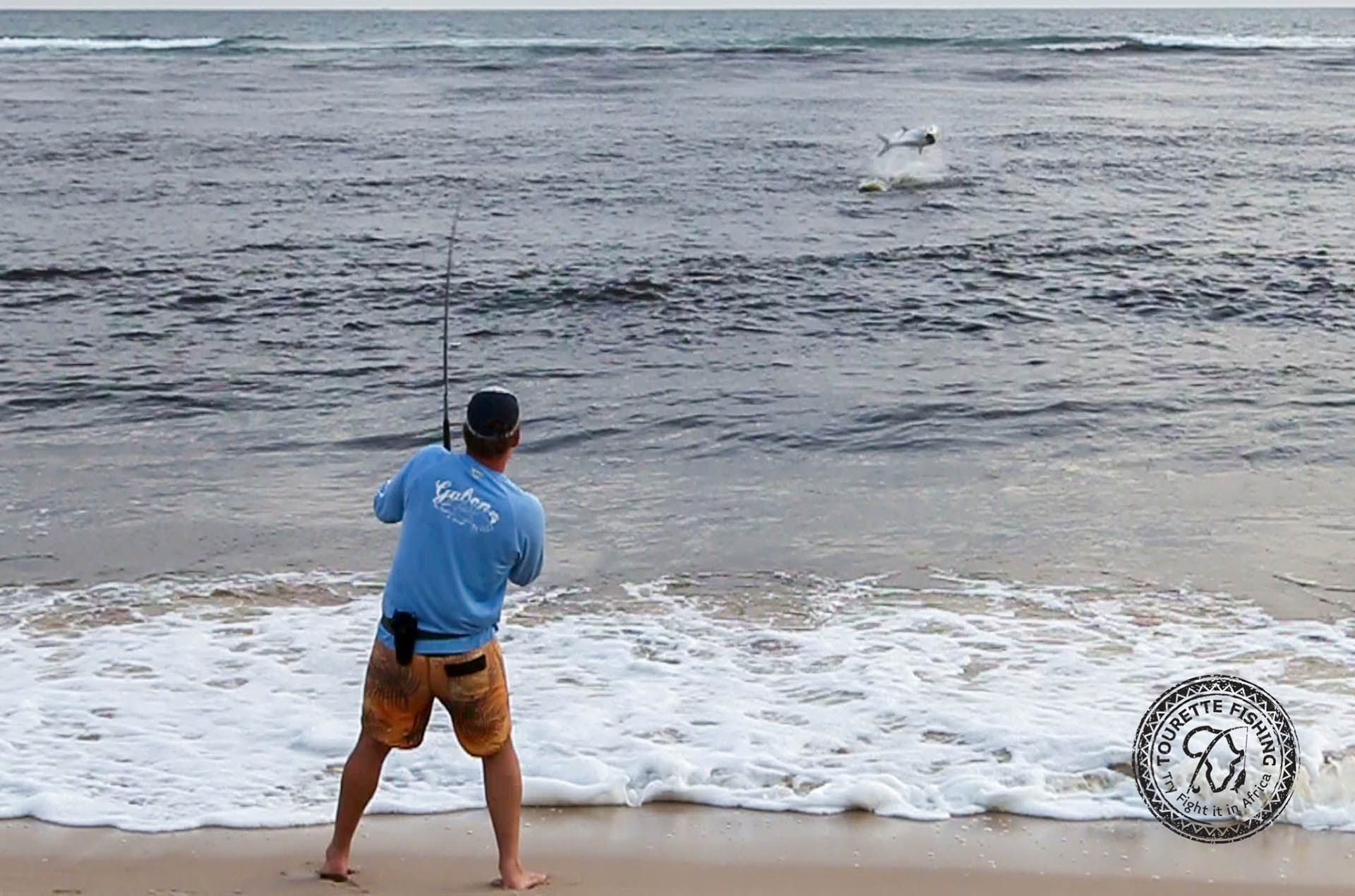 After regrouping and sorting out tackle again, the guys were more than eager and ready for the night session. The jacks came in again but nowhere near as crazy as the morning session. However, Marnus persisted and managed to land a big 20kg Jack. This fish took him far down the beach and really put his skills to the test.

After sunset the tarpon rolled in again for another 30minutes of absolute chaos. Guy hooked a really big tarpon but again got dominated and was left to wind in hundreds of meters of braid. To add insult to injury, on the very next cast, he hooked an even bigger one that came off on the third jump. Tarpon 2 – 0

After the success of the previous morning’s session, needless to say, everyone was keen to start Day 3 in the surf. This time round though, the Giant African Threadfin was out on the prowl and pulled the guys all over the beach from the very first casts. Being notorius bottom feeders, they showed a real preference to 2oz Sea Iron Spoons worked very slowly on the bottom.

Russell and Sandy really dominated this session and went tight with fish on almost every cast, showing the young guys how its done.

Despite hooking and almost loosing all his line to a monster tarpon on the previous cast, Russel managed to hold on this time round and land a monster 22kg Giant African Threadfin. A truly magnificent catch. 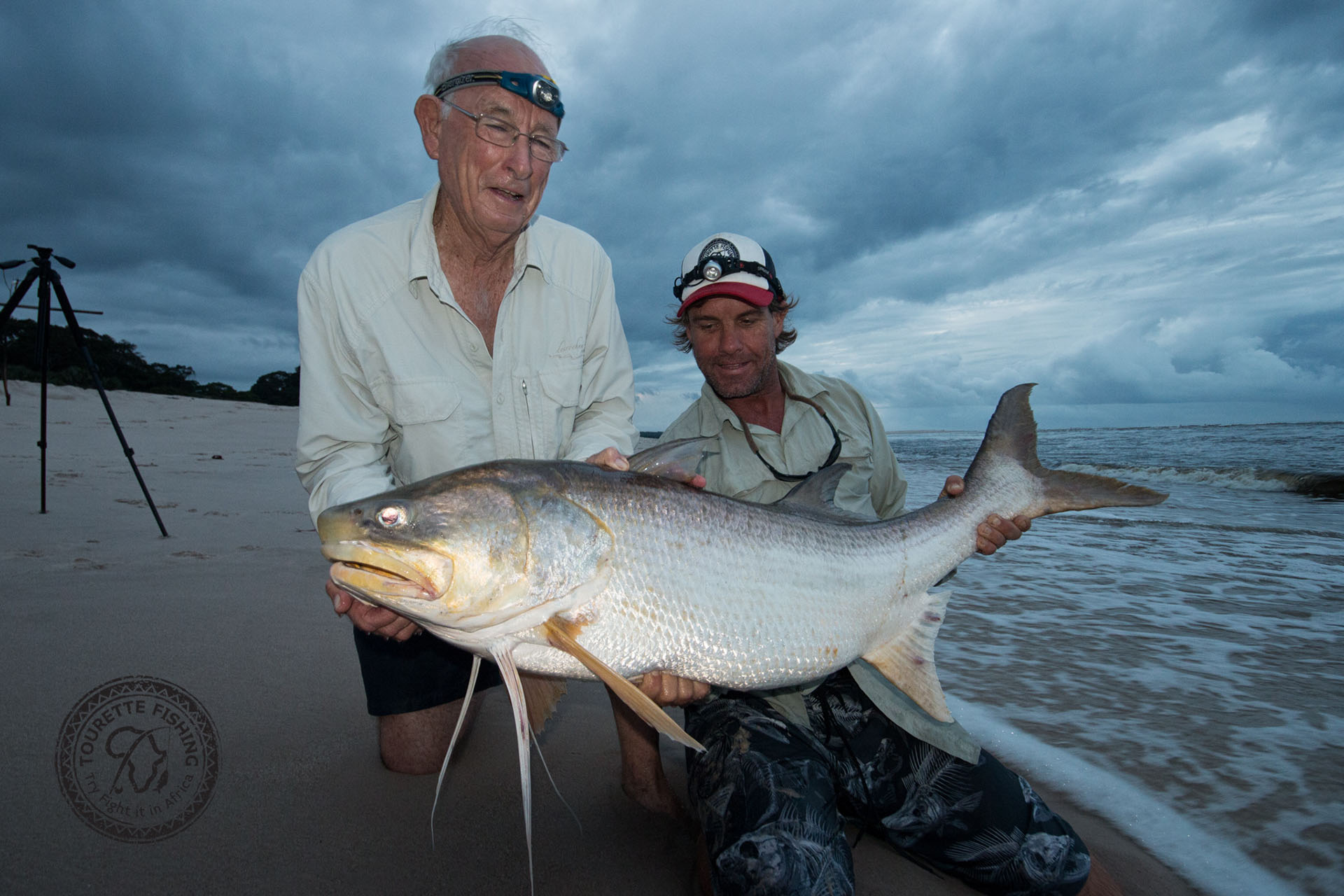 The evening session turned out to be like none any of these guys have ever experienced. Jacks were being hooked on every single cast! Guides were franticly running up and down the beach to take photos and release fish while some anglers had to sit down and take a breather.

To say it was chaotic would be putting it lightly. Giant tarpon were being hooked and jumped the whole time and guides were re-rigging rods at an alarming rate. These fish are magnificent beasts and hard to land in the most favourable conditions. But to hook these legendary predators, in access of 70kg in the pounding surf, is a whole other ball game.

In the end we were defeated and left with broken bodies and tackle.

By Day 4 everyone was really tired and unfortunately a big low pressure was moving in as well. The morning session in the surf only produced a handful of smaller fish and by early evening, monsoon like rains moved in bringing the the 4day trip to an end.

Despite the the weather putting the fish off on the last day, we experienced some truly amazing fishing and again Gabon showed why it is the number one destination in the world for Saltwater Surf Fishing.

Also checkout our Facebook page for the full gallery 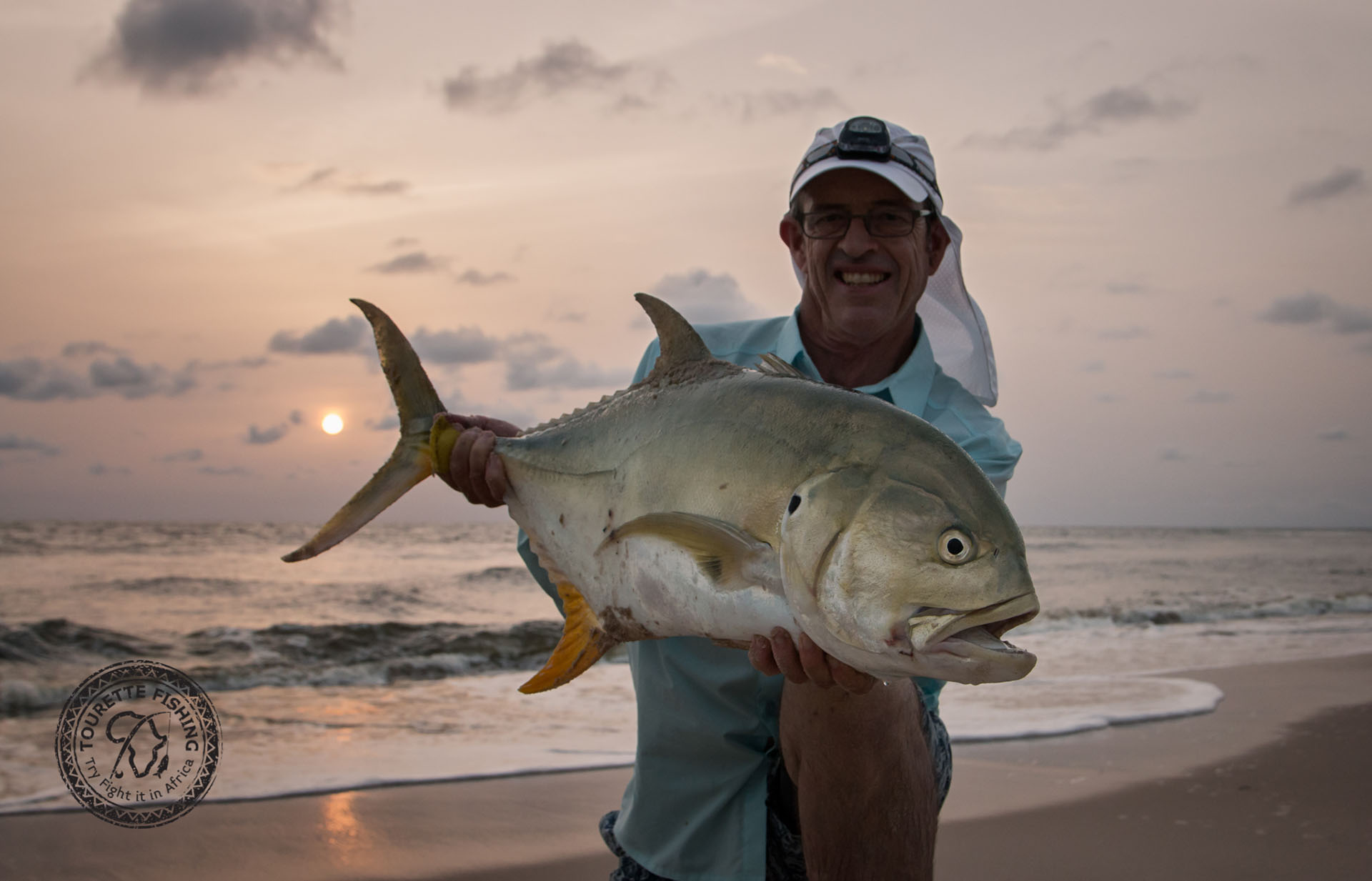 Guy with a nice Jack Crevalle 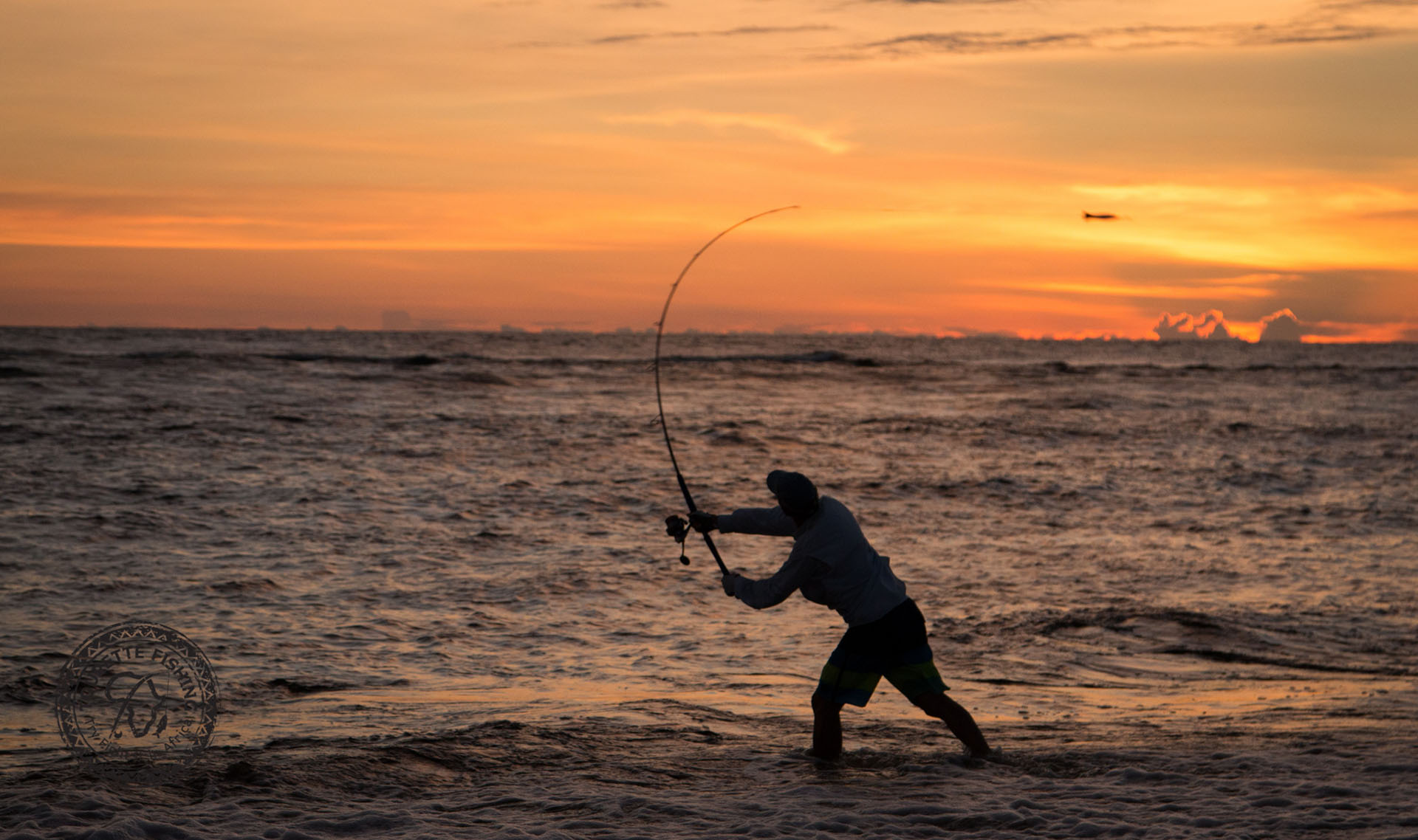 Fishing into the sunset 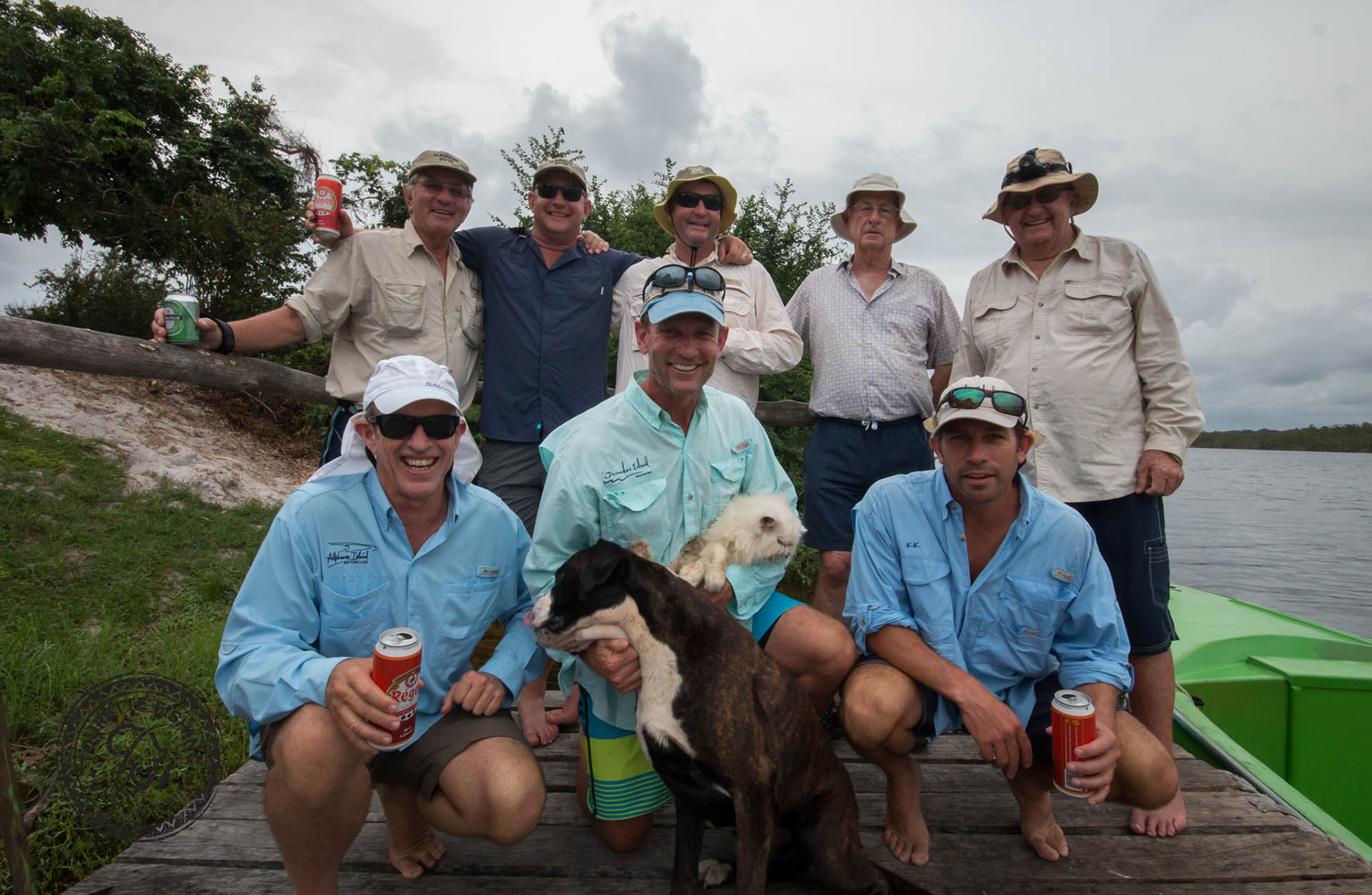