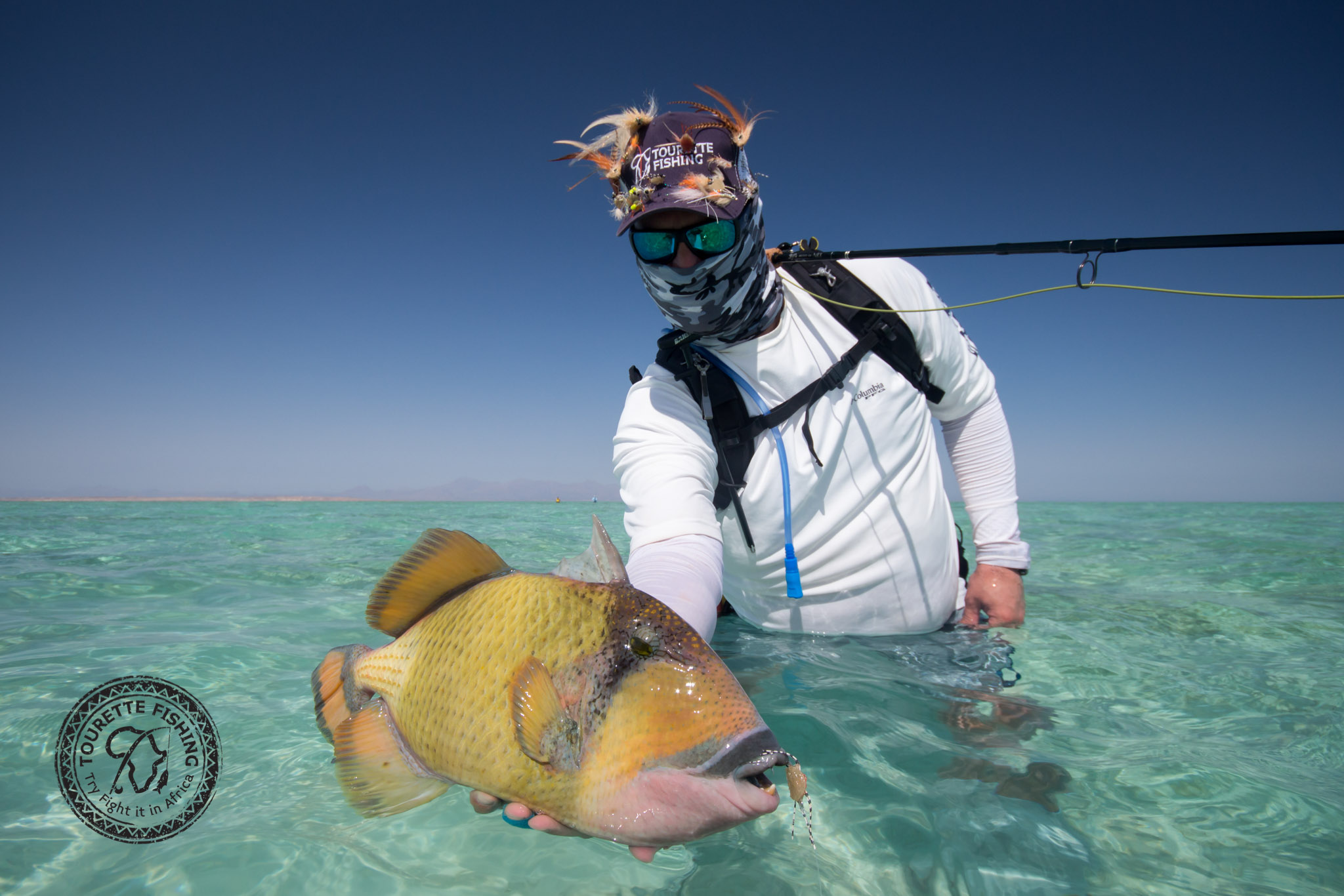 For the second week of the 2015 Nubian Flats Season we were joined by returning guests and old friends Eric Heyns and Chris Rooseboom. They were teamed up with friends AJ, Riaan, Werner, and Richard Wales from Cape Town.

The wind was still strong and the forecast showed that the conditions would be tough for the first few days.

The first morning everyone was more than amped to go out on the flats despite the tough conditions. The water was high and really cool but the triggerfish were out in good numbers. The strong wind made spotting these fish really hard but by the end of the day everyone had plenty of shots, although not everyone converted these chances into fish. 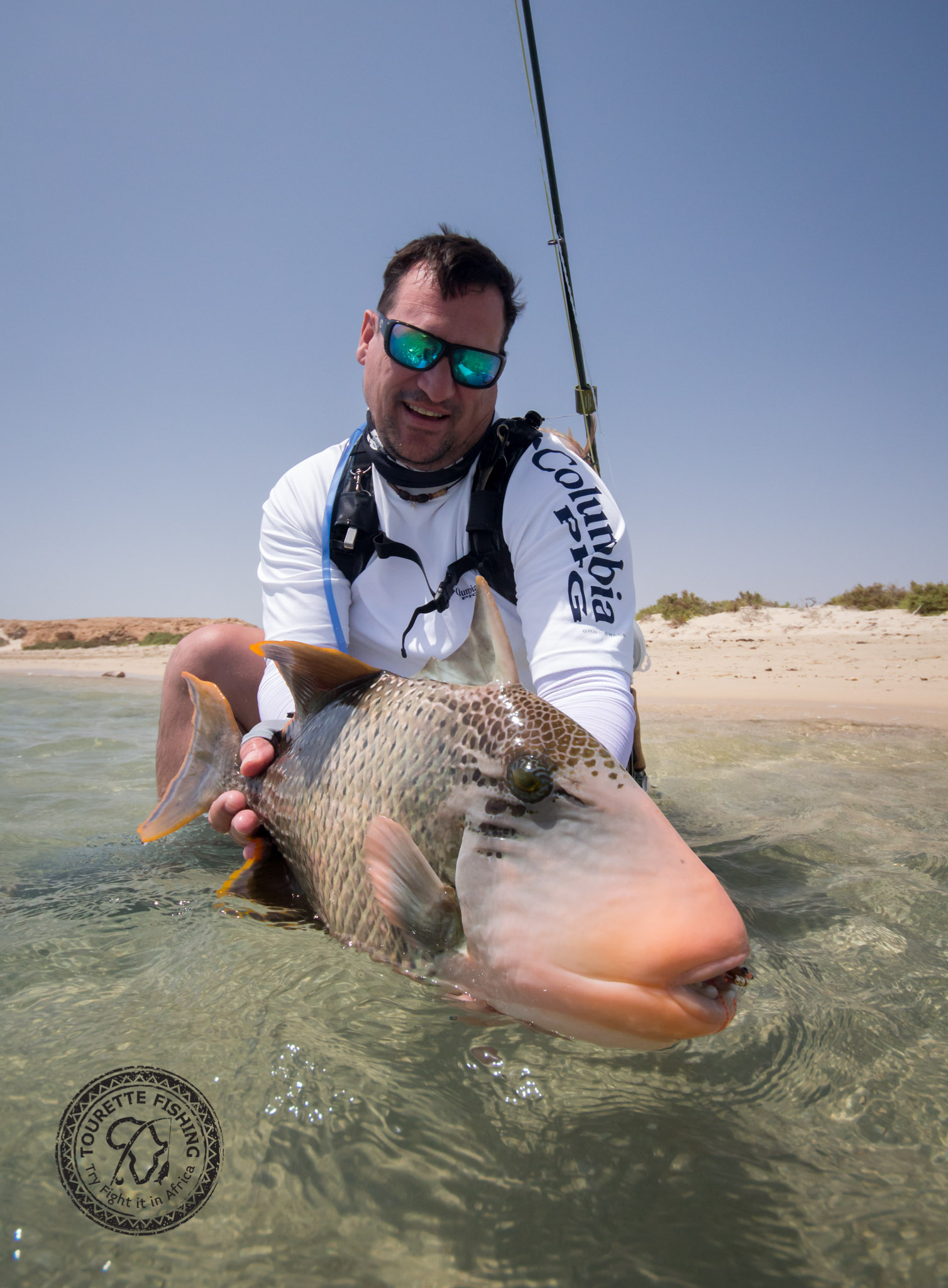 Triggerfish are extremely difficult fish to catch. Firstly, they are really hard to get close to. Secondly, they can be incredibly fussy when it comes to eating your fly and lastly, when you finally hook one, chances of him either clipping your hook like a side cutter or just plain letting go, is a very real possibility! All of the above make them that much more desirable to catch. Addictive is the right word that springs to mind when thinking about triggers.

Just being able to get the eat is a massive victory.

On day 2 the wind continued to make the going tough, but was still manageable. The visibility on the flats was less than the first day, and on top of this the permit, bones, bluefin and GTs, that were on the flats in good numbers the week before, were hard to come by. Fortunately the lack of these species was made up for with the ample shots at tailing triggers. The wind made the going really tough but on a positive note, the extra noise and movement in the water allowed the anglers to come really close to tailing fish, making presenting the fly a little easier.

We succeeded in fooling many triggers to eat the fly and landed some really nice Yellow Margined Triggers with the odd Titan in between.

The wind continued to gain potency and we resorted to some teasing in the afternoon before heading back to the mothership for some shelter. The going was tough but Richard persisted and landed a really nice bluefin trevally and a decent GT in the roughest of spots. 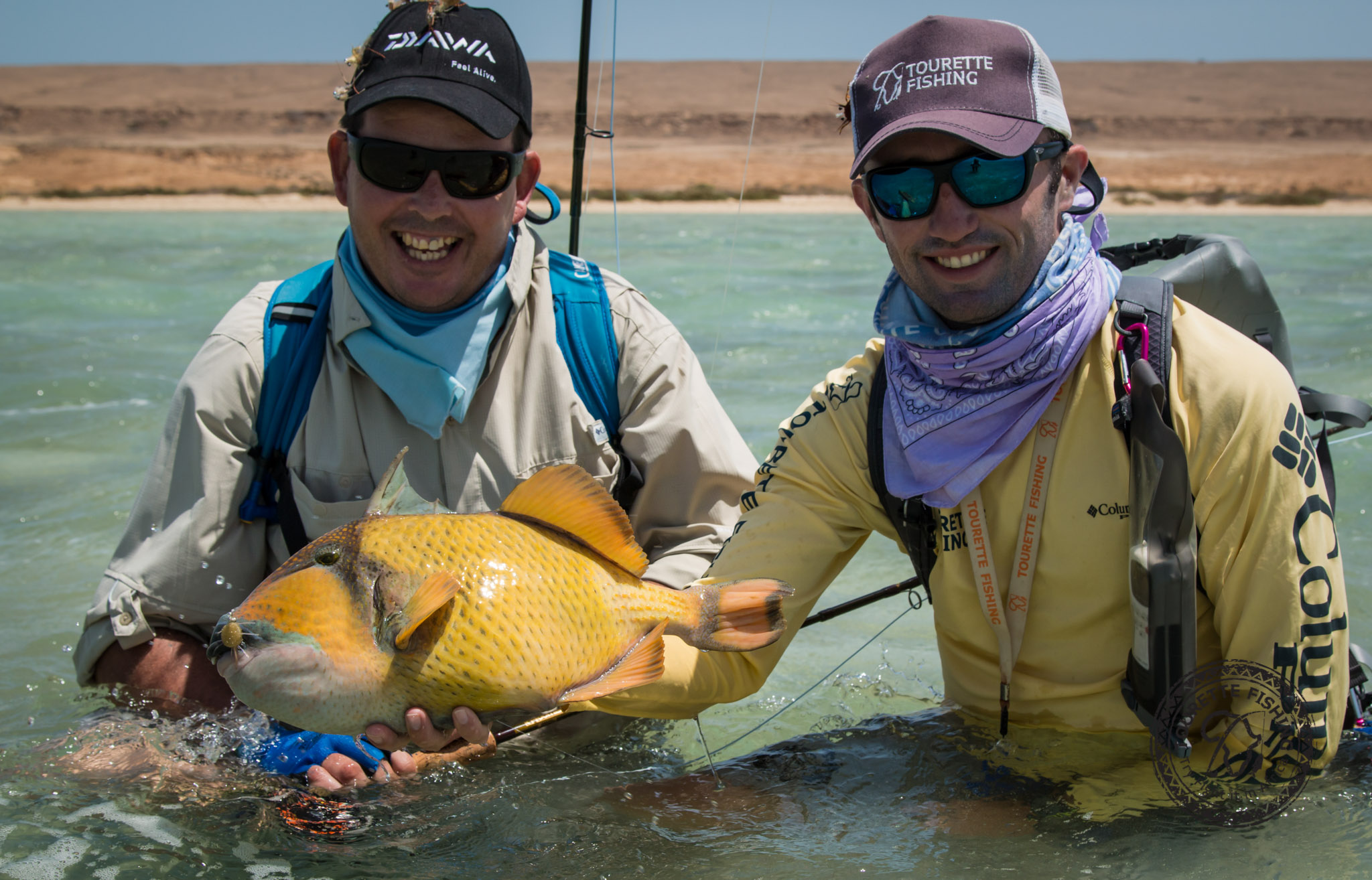 Happy Guide and Guest. Eric Heyns getting the job done.

Unfortunately the wind reached gale force speeds during the night and by the morning of day 3 we had to call off fishing, and spend the morning tying flies and rebuilding leaders.

By late afternoon the wind died down and we headed out for a quick session in one of the semi sheltered areas close to the mothership.

What was expected to be a slow session turned out to be a little gem. Eric alone hooked 7 triggers and landed 4. Between the other anglers on the flat we got a couple more triggers and also had a good shot at a solid meter GT that somehow missed the fly 3 times before spooking. A couple more big GTs came in over the flats, but we didn’t manage to get a fly in front of them. The most memorable catch of the day though had to go to Riaan who sighted, cast to and landed a solid 8 plus kg Bohar Snapper on the flat.

Over the next couple days the weather improved drastically and so did the numbers of triggerfish on the flats. The guys landed some really good sized fish and got schooled by many more! We also had some shots at milkfish, bluefin, barracuda, GTs and incredibly big bonefish but to no avail. One bonefish in particular was well over 12 pounds, and although it took its time to inspect the crab pattern, in the end it decided against eating it. 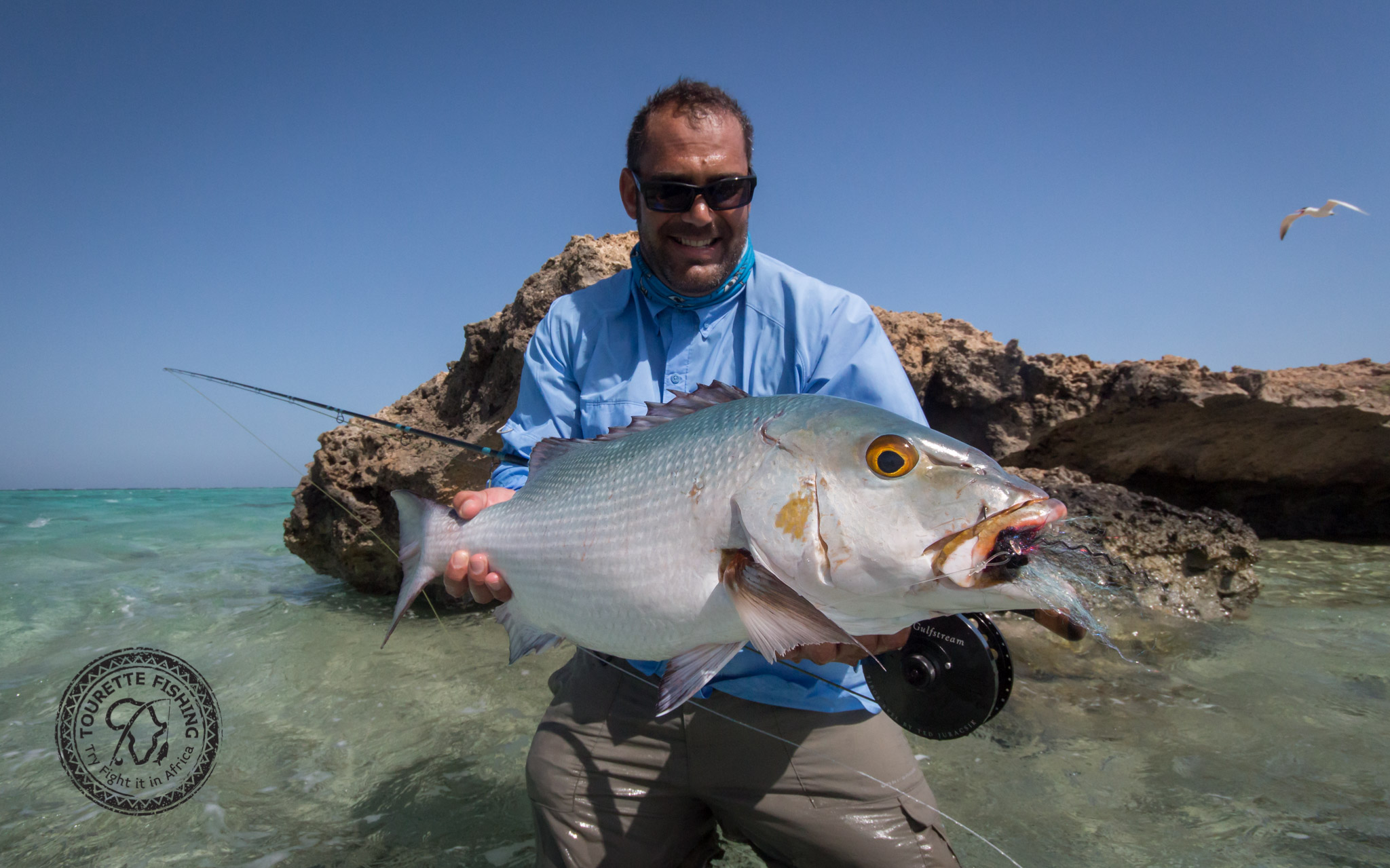 We are still hoping for a photo with one of these monsters. This is something to really relish, the thought of cracking the code on these monster bonefish, as they are like no other bonefish we have ever fished for in the past. Big, spooky and more selective than the permit.

On the last day a big frontal system moved over the area again bringing heavy clouds with it.

The fishing however was hot from the start. Barely 20min into the walk we were already presenting flies to tailing fish and the majority of them were incredibly big in size. So much so that every fish we hooked, ended well into the backing.

Luck was not on our side though. Richard and Riaan hooked 5 really great triggers and both, on each occasion, were left with broken tippets and mangled hooks. Between Chris and Werner they presented to 15 fish each, and although they hooked a few, were still left empty handed by the end of the session. 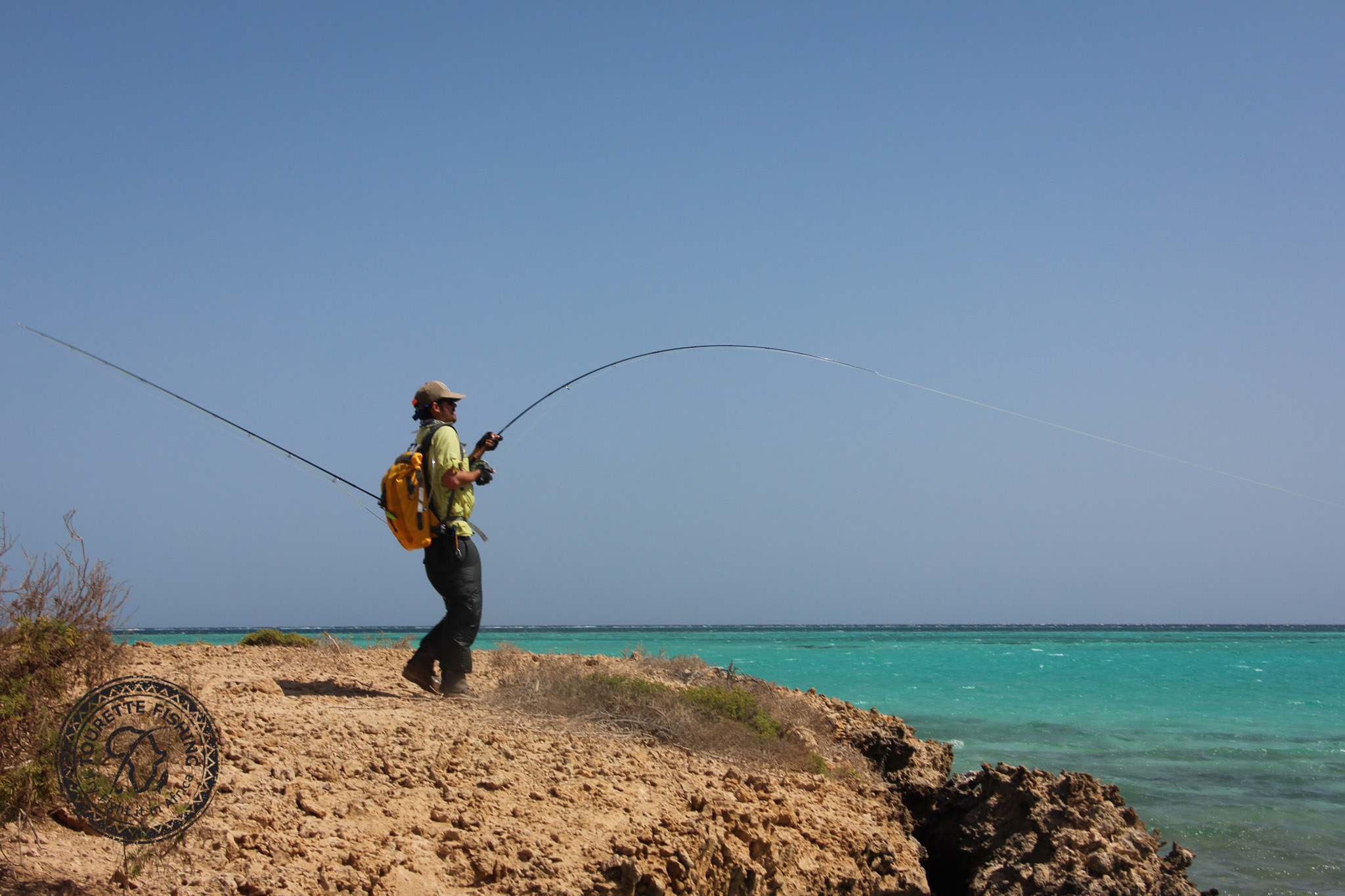 In the end though we got 4 triggers to hand before being chased back to the mothership by the strong wind at 15:00, bringing the trip to an end.

Over the week the weather made the going very tough but the guys persisted and did very well. It was really good to share this week with such a great bunch of fly anglers that were happy to accept the good, with the bad hand we got handed with the weather.

On a final note: To all guests that will be fishing with us on the Nubian Flats in the near future. try to limit the use of any hot orange in your crab patterns.

Thats it for now but be sure to check in next week for another update from the Nubian Flats. The weather for the next 7 days looks dead calm, and we have got a score to settle with some permit, GTs, and some massive bonefish. I am sure there will be plenty of shots at the triggers.