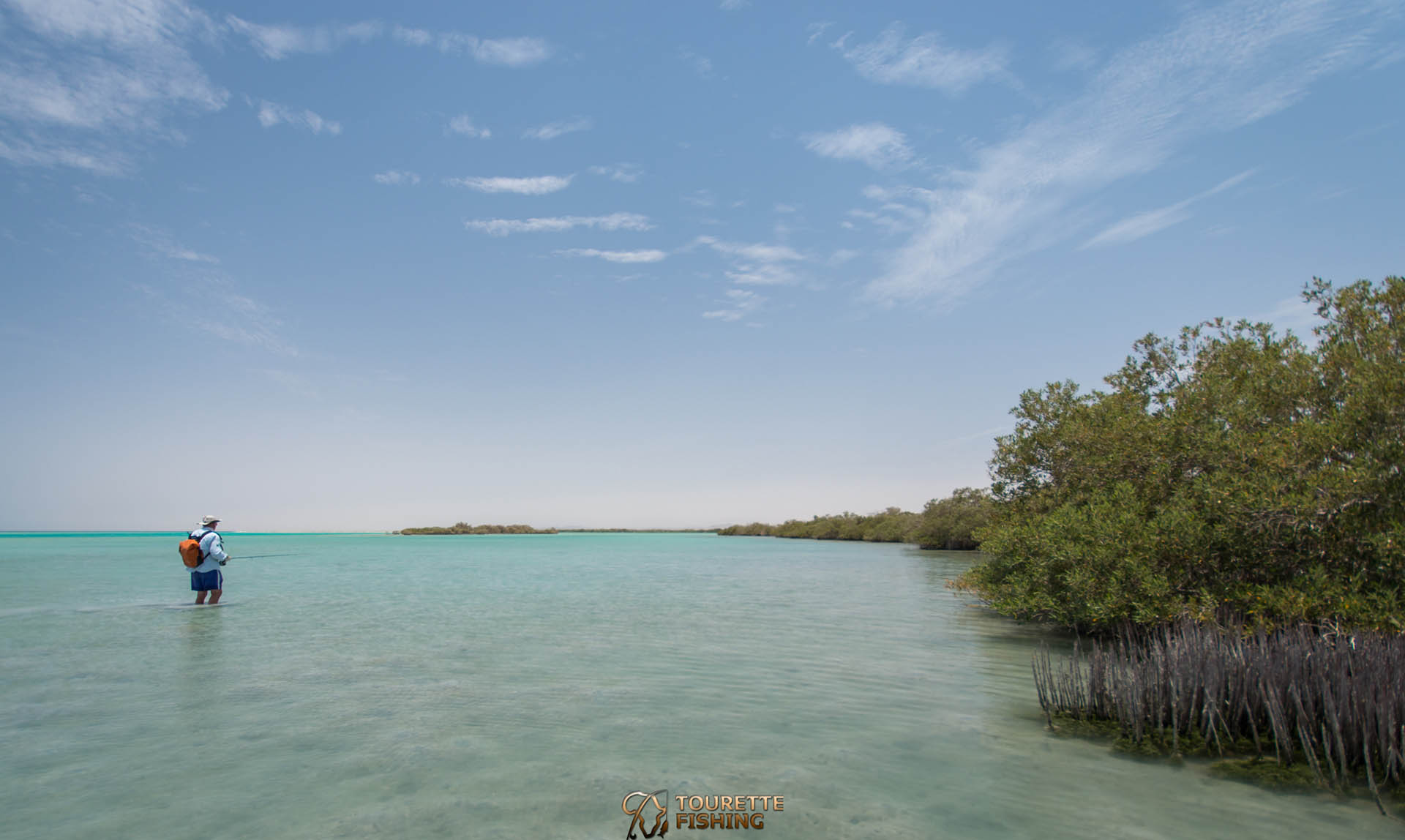 Looking for triggers and bones on a mangrove flat

Wow, I can’t believe that the end of this awesome exploratory season is almost upon us. Looking back we have covered so many new areas, learnt an incredible amount, made some great new friends and above all had some world class fishing. This week we have earmarked a couple new areas, in a combination with a couple islands and flats that we already know. Thus we will have a great mix of knowing what to expect along with the excitement that comes with exploring someplace completely new. To make the week even better we welcome a great bunch of old friends onto the mothership.

The forecast looked great for the week – a little wind around on day one but fortunately the forecast showed that this would be the last of the wind for the rest of the week. 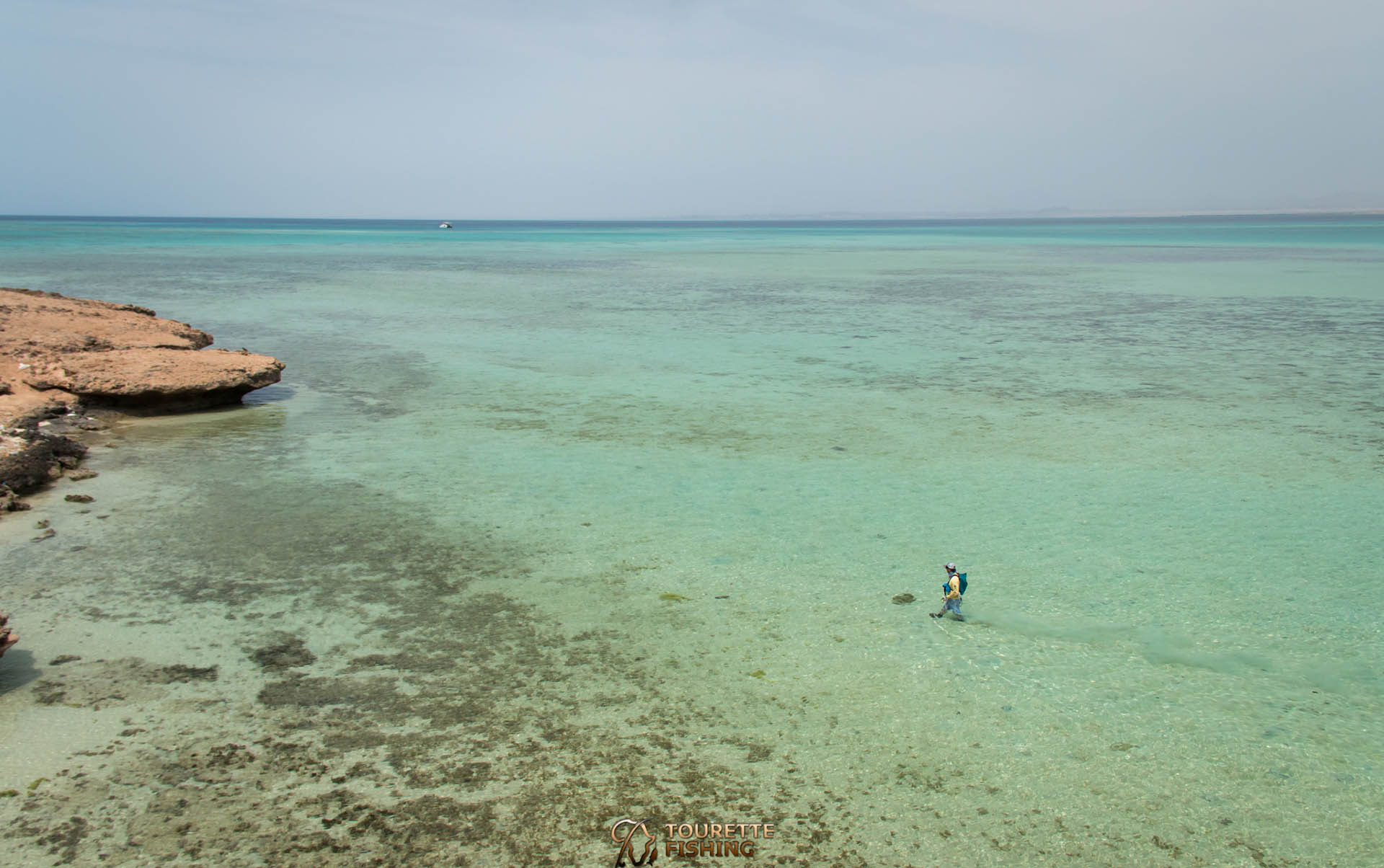 Endless opportunities for exploring on the Nubian Flats

Day 1 and we explored an island we have come to know relatively well already. In the past we have seen incredible number of triggers, odd shots at permit and bones, good number of bluefin and GTs, so it was going to be a case of fishing to whatever showed up in front of us. Of course being the first session, the level of excitement from the crew was sky high.

The flats looked really nice, knee to ankle deep water with turtle grass and shale bottoms with sections of really shallow sand. Very promising and it didn’t take long for the first trigger fish to make its appearance either! In fact, by lunch time we landed 6 fish, a mix of Titan and Yellow Margin! For some people this might not sound like incredible fishing, but anyone who has had the priviledge of targeting these awesome fish will know that they can be extremely frustrating and temperamental. We saw some big bonefish as well but no one managed to get any shots at them. The afternoon we carried on walking the flat and found some more trigger fish. Hats off to Abri though who, on his first flats trip on day one, managed some trigger fish and in the afternoon – after some fancy footwork to dodge some coral – managed a nice GT and Bohar! 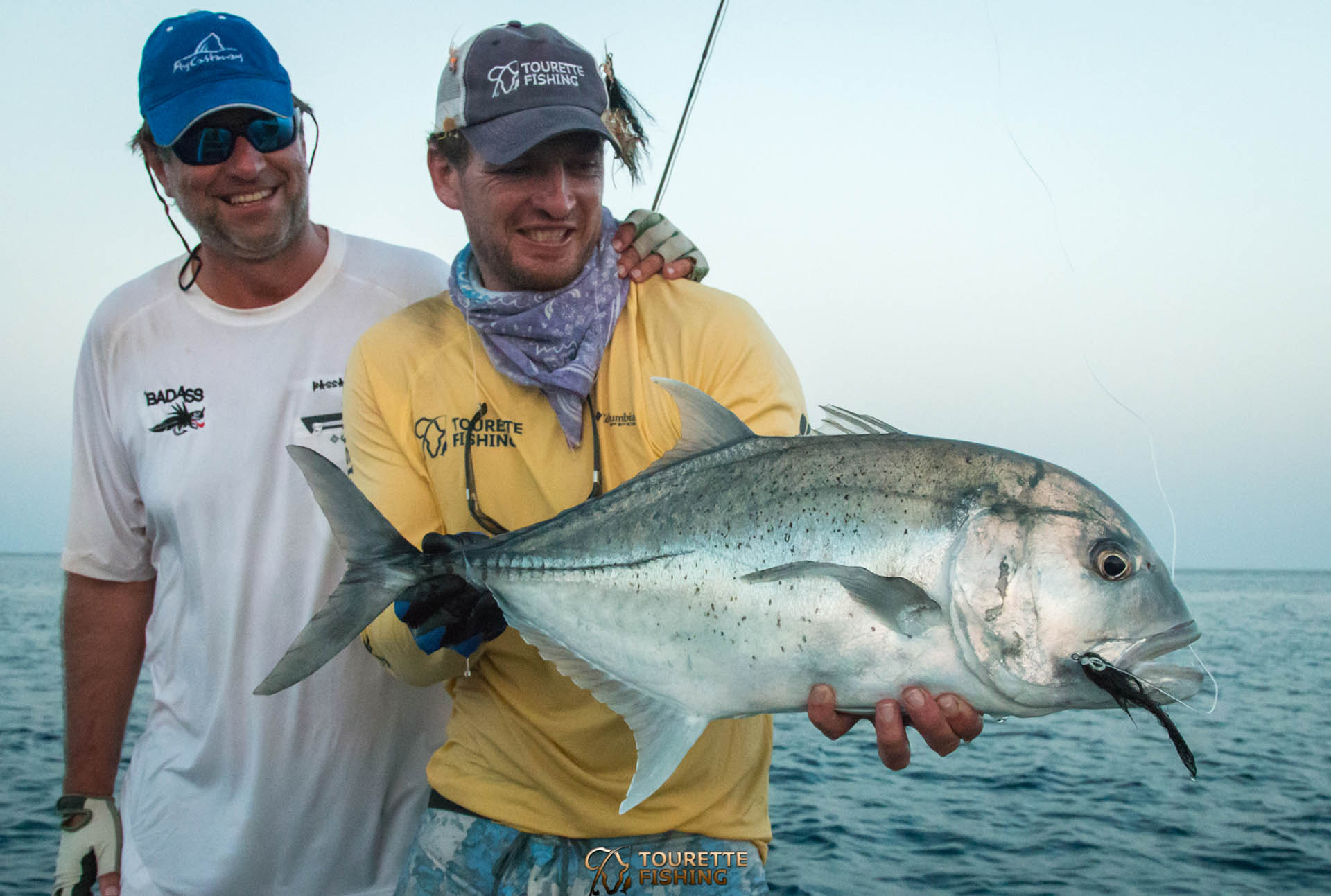 The next two days the guys were keen to spice up their trip and mixed things up with a session in the morning vertical jigging offshore for Dogtooth tuna and then spend the afternoon walking some more flats.

The morning sessions offshore produced some good sized GT’s, some small Doggies but also some really tired bodies followed by some pretty good trigger fishing in the afternoon.

Day four and five though is where we hit the jackpot!! We moved the mother ship to a tiny little island which looks like a little sand dune floating in the middle of nowhere, surrounded by a big sandy flat ranging from mid shin to waist deep water. The first time we walked it was in the afternoon and although the light wasn’t great we found some good numbers of trigger fish and some gt’s cruising the shallows. 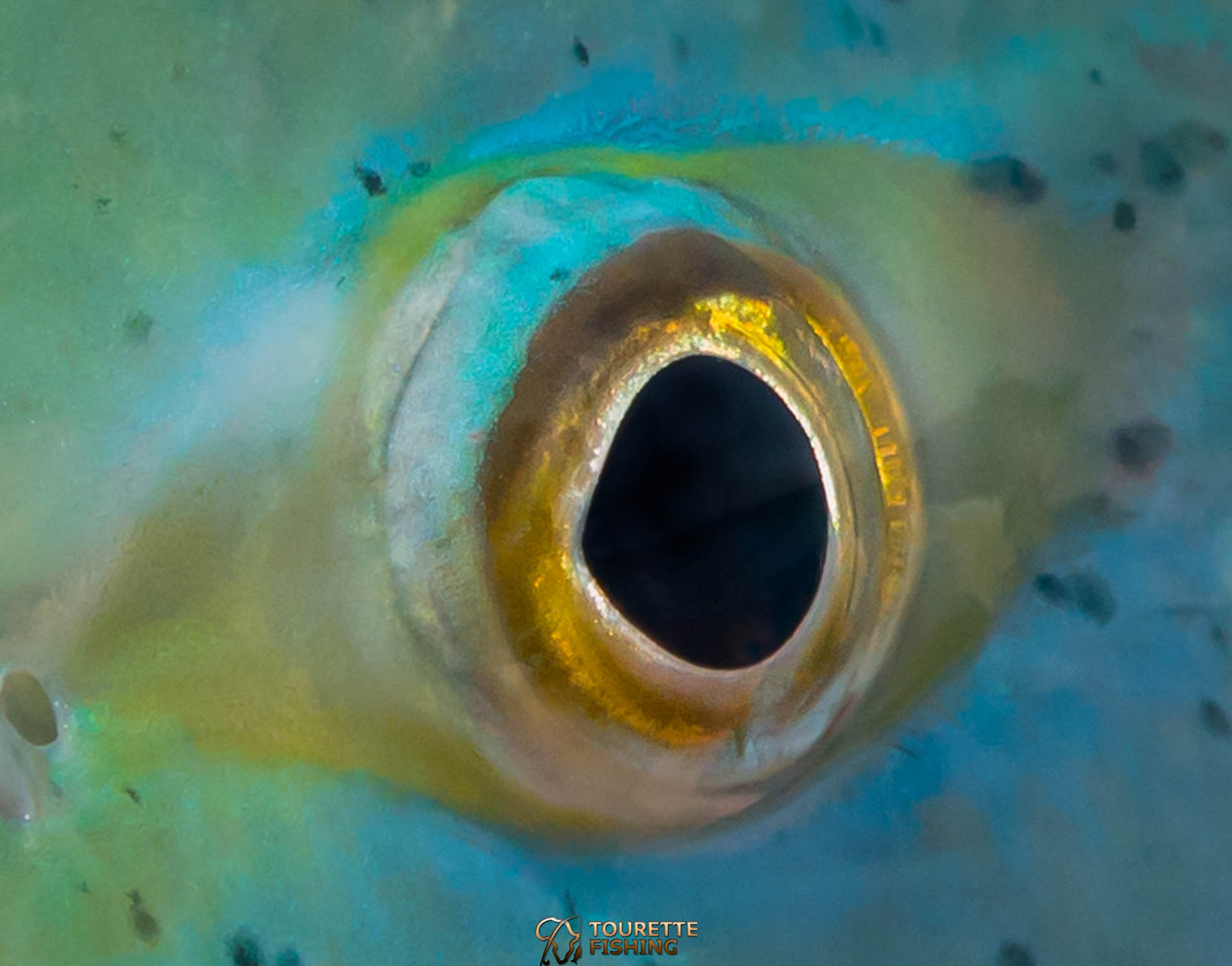 Amazing colours of a Bluefin – Fly Fishing on the Nubian Flats

It was only on the next day that this little island really showed its hand when we walked it in the morning session! Trigger fish numbers like none of us have ever experienced, and this is saying alot considering over the season we have been treated to trigger fishing that is hard to put into words. To top off the inrecible numbers, They were good sized and hungry. Pretty much everyone capitalized on this and hooked, landed and lost good numbers of triggers. On top of the triggers we also saw some interesting fish on this huge flat – Milkfish, GT’s, bluefin, barracuda’s were also in the mix but to me, the highlight was the massive shoals of bonefish we found! Petrus Gous and myself were at one stage surrounded by loads of 7lbs to 9lb+ bonefish that were been chased over the flat by the gt’s. 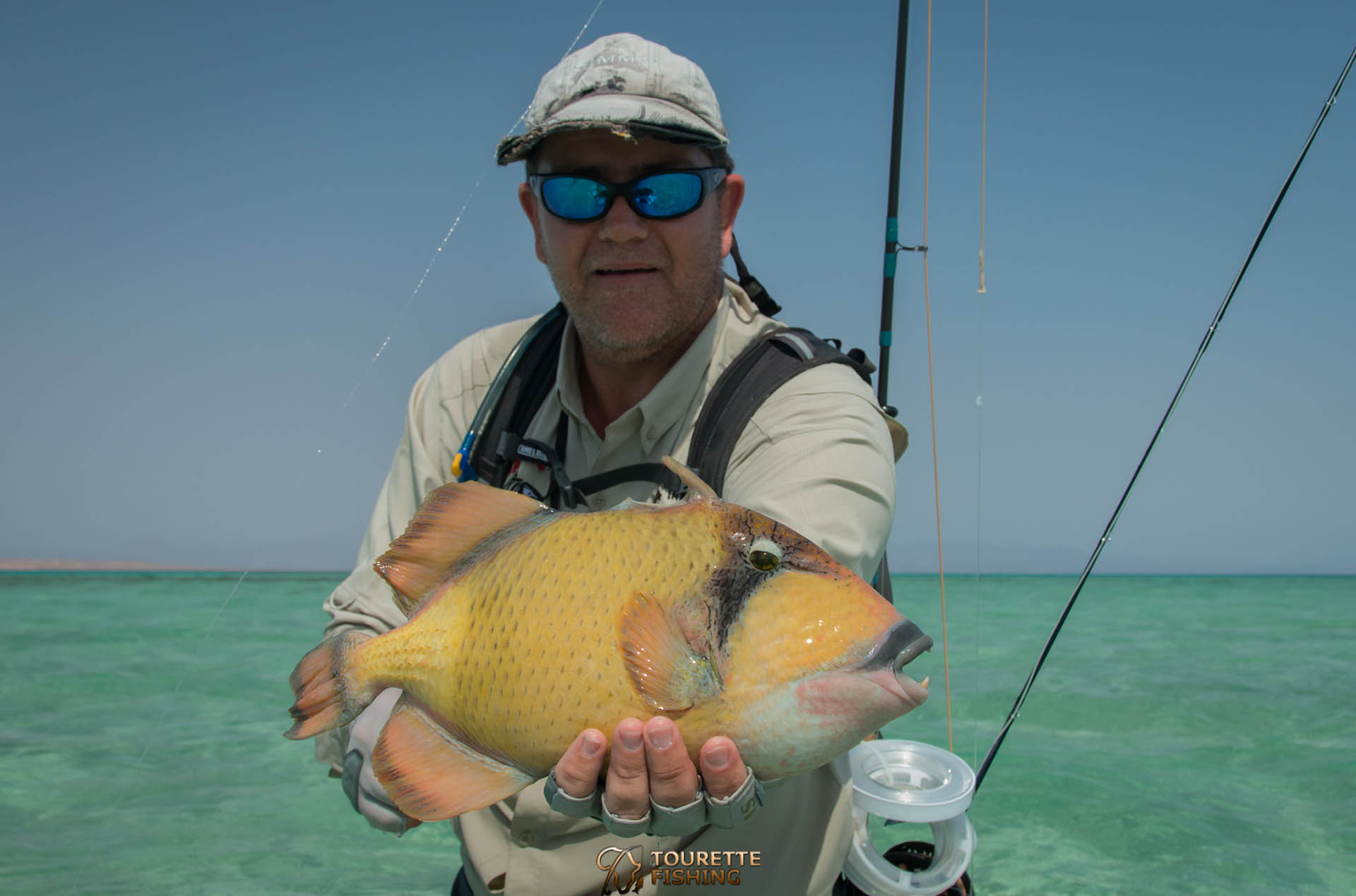 The sight of a massive shoal of bonefish scrambling right at you trying to get away from GT’s is one pretty amazing experience. The bones frame of mind made them impossible to catch.

Rob found some tailing permit and some bonefish as well but none of them showed any interest at all. The bonefish were pretty skittish more than likely as a result of the GTs – a case of avoiding been eaten rather than eating anything themselves.

The last day we moved to a new area but and only fished half of the day. We found some more trigger fish and snapped on a couple triggers that were well over the 10lb mark. 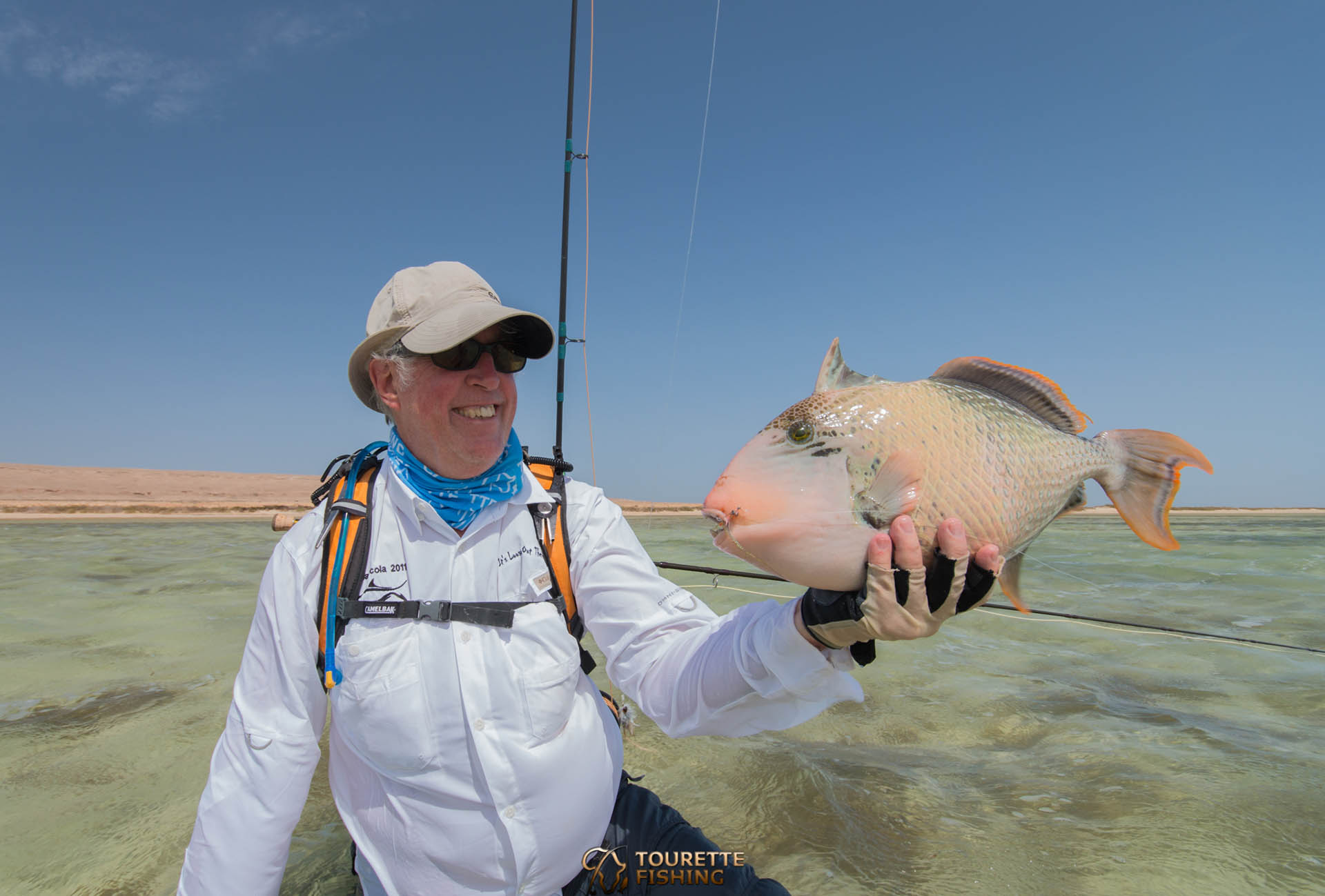 Fly fishing for Triggers on the Nubian Flats

We also saw a really large shoal of GT’s with +/- 25. After lunch the wind picked up, and the decision was made to take our tired bodies back to the mother ship to give the guys enough time to clean and pack their tackle.

A little windy ending to the week again but what a week it has been.

Be sure to check in next week for another update from the Nubian desert.