All seasons must eventually come to an end, and group three marked our final week on the Kavango River in Botswana. This group was a mixed bag from all over South Africa. Peter Moss, Haden Keeton and Mike Blake of Durban joined Mike and Johan Khun of Cape Town along with Gordan and Jesse Bosch from the city of gold. Although all originating from very different parts of the country, the joys and excitement of fishing the catfish run pulled them all together for a week of fun, laughter and some impressive fish!

The majority of the group focused on the fly with the exception of a few who turned to conventional methods when the days got slow. Conventional methods moved from traditional spoons and artificial lures to a more ‘natural’ feel. Bream fillets, bought off the local fisherman, were used as drift baits on circle hooks to target tigers in the main channel. A decent amount of tigerfish were landed however the majority fillet feeder were the catfish. Jesse, Gordan, Mike and

Haden cracked on with this method and were seldom not bent into a fish. Mike and Haden proved to be the catfish kings with them both claiming catfish over 15lbs, quite a daunting task on a small spinning rod. Yet the catfish to tigerfish ratio deemed to be too high and so the fly, jig and effzet spoon became the favored method when targeting these fussy, striped waterdogs.

The first few days of fishing were not as productive as the past few weeks had been. We found the runs moving very far south, but hardly any tigers amongst the catfish. We began to pay attention to smaller, concentrated shoals of feeding catfish that were only shadowed by a handful of birds. Using a smaller fly, on account of the size of the baitfish we were seeing, more tigers started being brought to the net. Even the standard old ‘speed cop’ and ‘wooly bugger’ started working, which was a clear indication that we had been fishing far too big.

Mike Blake fished hard on fly and by the end of the week was rewarded with four fish over the six pound mark. Two of his biggest fish were caught nowhere near a run, which was very interesting. Fishing a shallow sand bank with a black clouser produced a beautiful 8lb fish. A big female with no teeth.

Mike and Johan Khun caught a healthy number of tigers throughout the week yet the bigger fish they were both after didn’t seem to come their way. Non the less the father and son duo had a great time, and enjoyed coming back to Botswana to partake in the annual catfish run.

Gordan and Jesse Bosch had to shake the rust off the fishing muscles, but with a few refresher sessions both of them were comfortably landing fish. Jesse, who had never caught a tigerfish, was thrilled when he landed a solid 5lber. Gordan, who had done a trip up here with Lionel before was no stranger to the scene, yet forgot how strong these fish were and was rudely reminded by an absolute pig of a tigerfish that unfortunately spat the hook right at the boat. This would have been the fish of the season and a fish of a lifetime for Gordon. But that is joys and spills of tiger fishing, next time Gordon!

Looking back, the last week of the season will not necessarily be remembered as the best fishing week, but rather as a week where lots was learned, appreciated and enjoyed. Botswana was breath taking in every way possible. I look forward to see what next year’s season brings.

Until then, Ke a leboga Botswana! 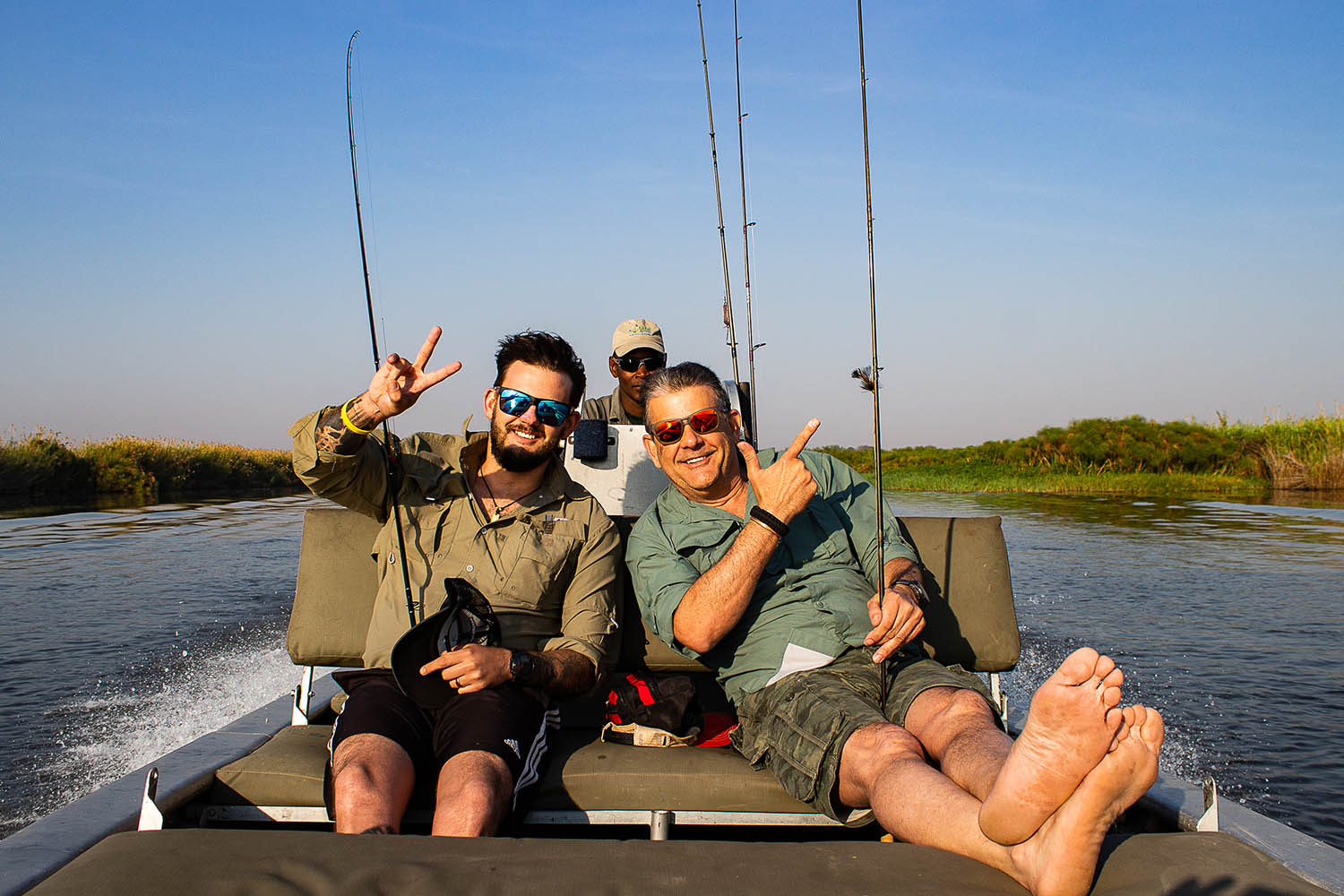 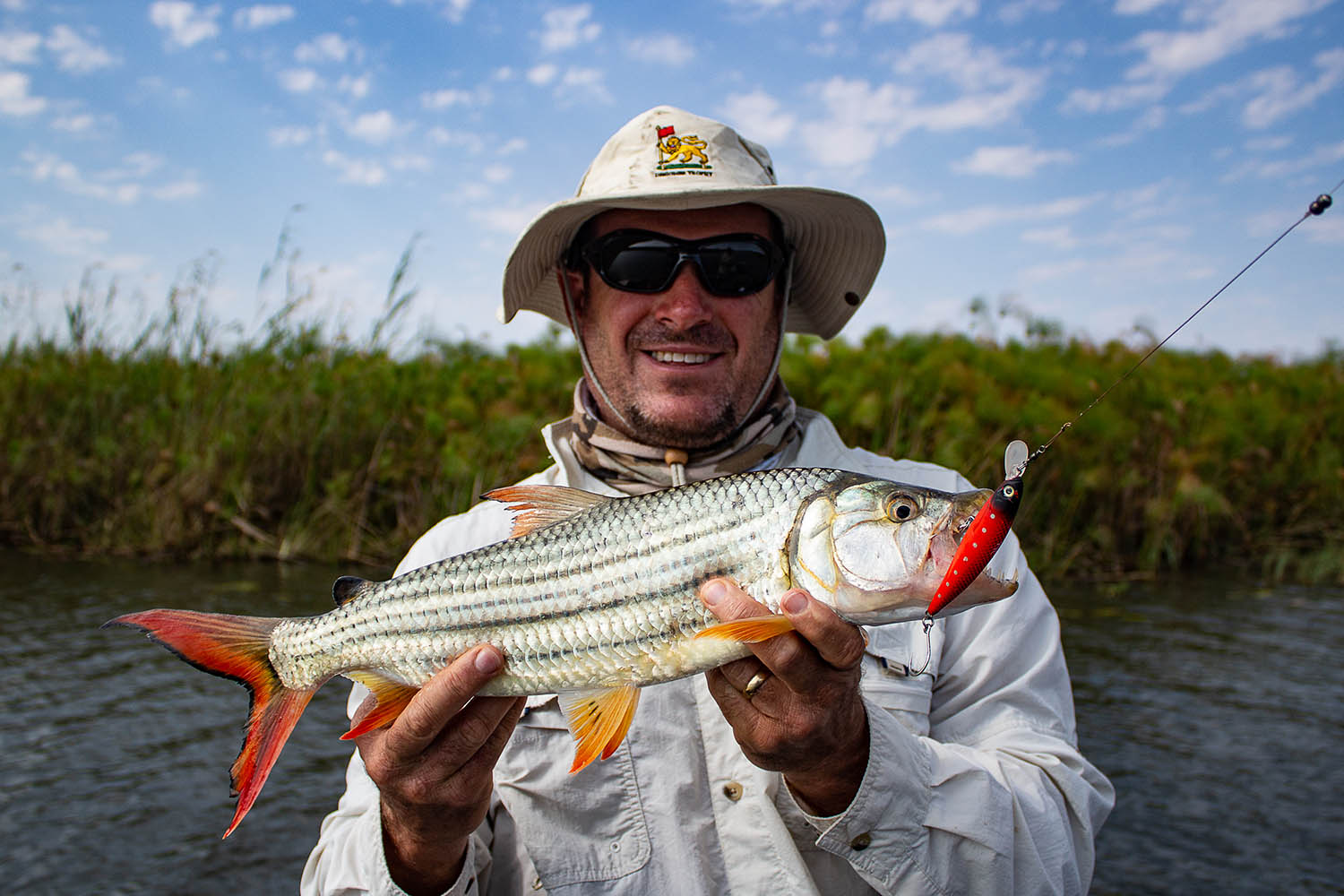 Peter Moss with a small tiger that took a big lure. 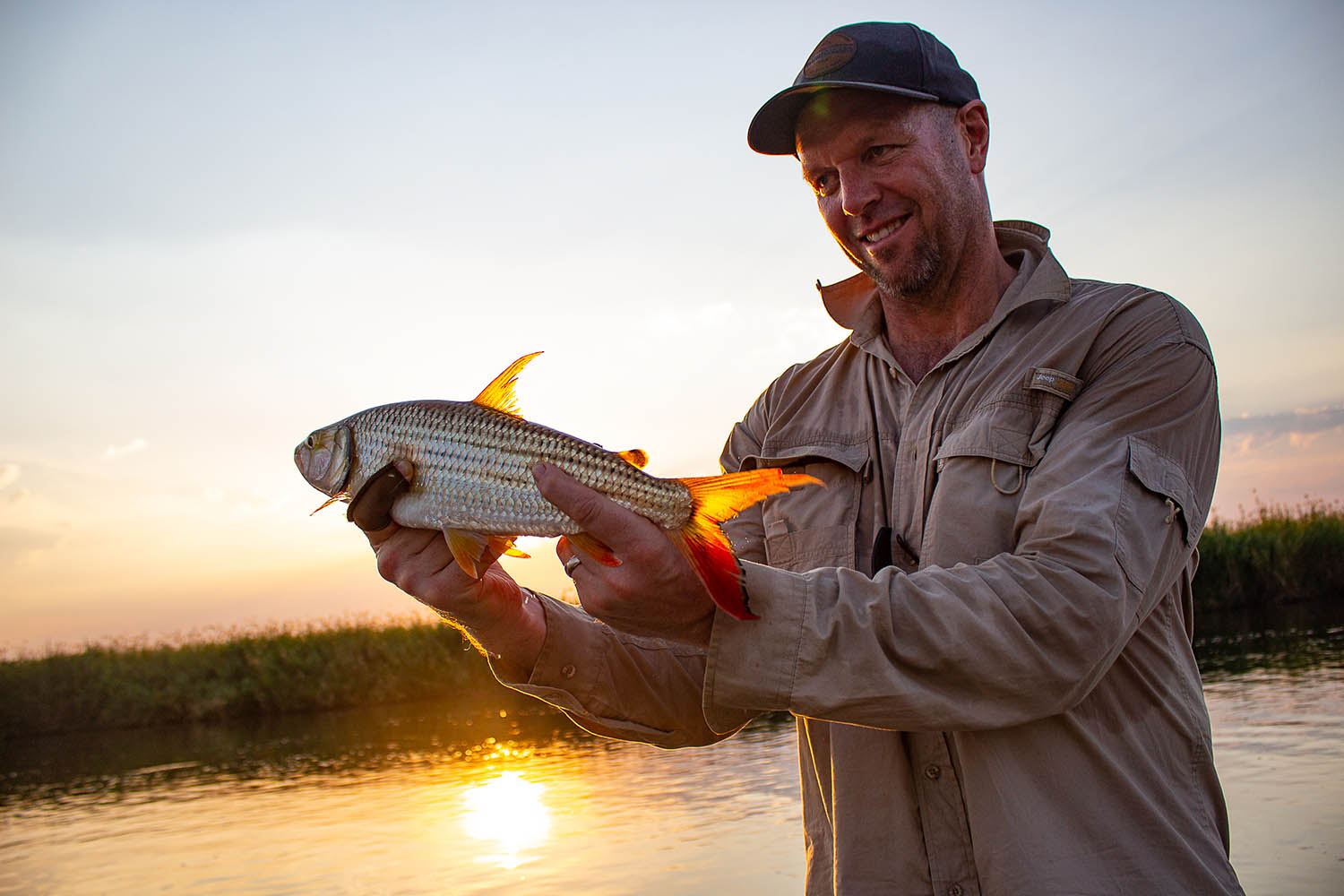 Haden producing the goods at last light on the first afternoon. 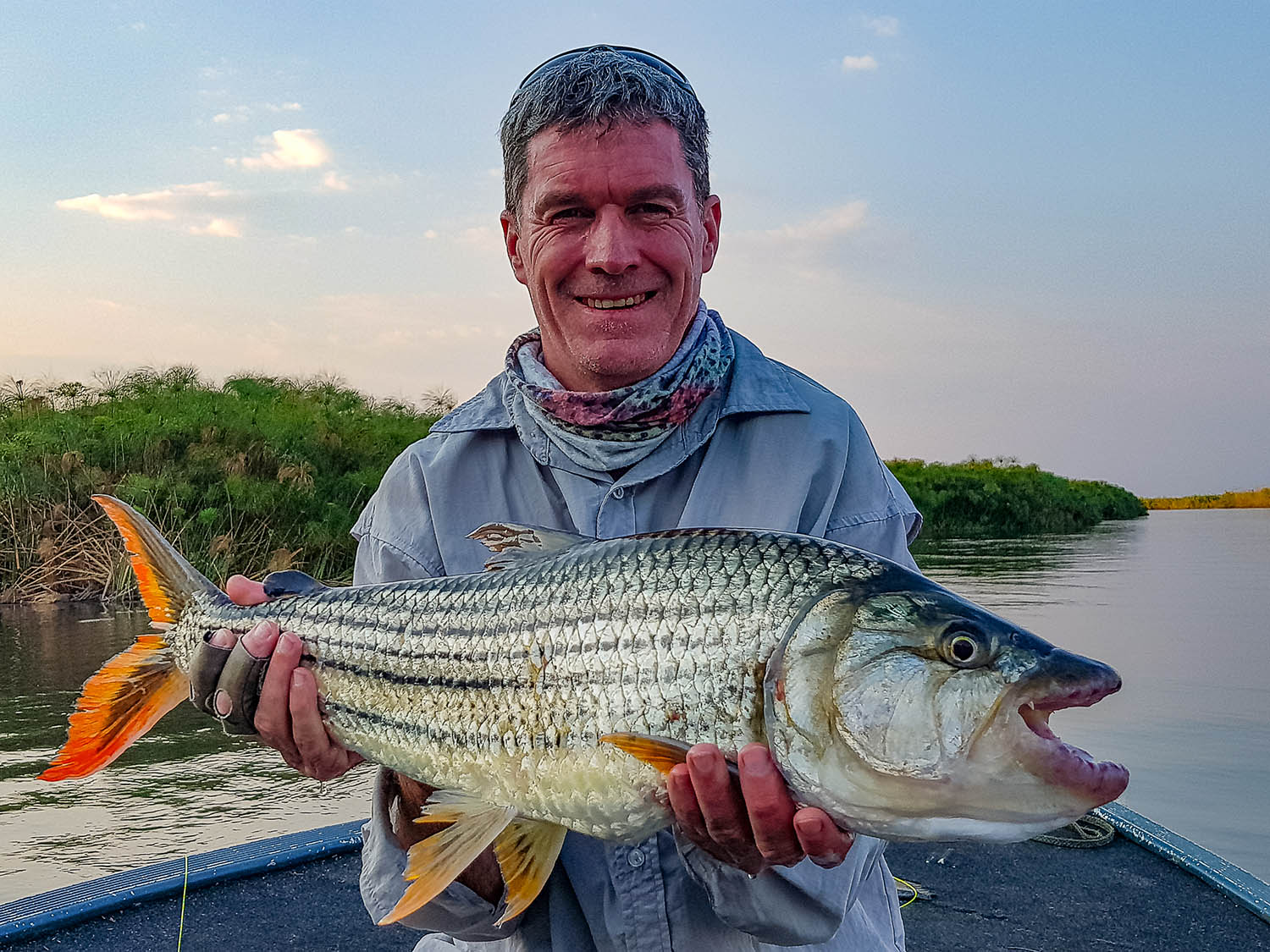 Mike Blake with an 8lb warrior that he caught on a small black clouser. 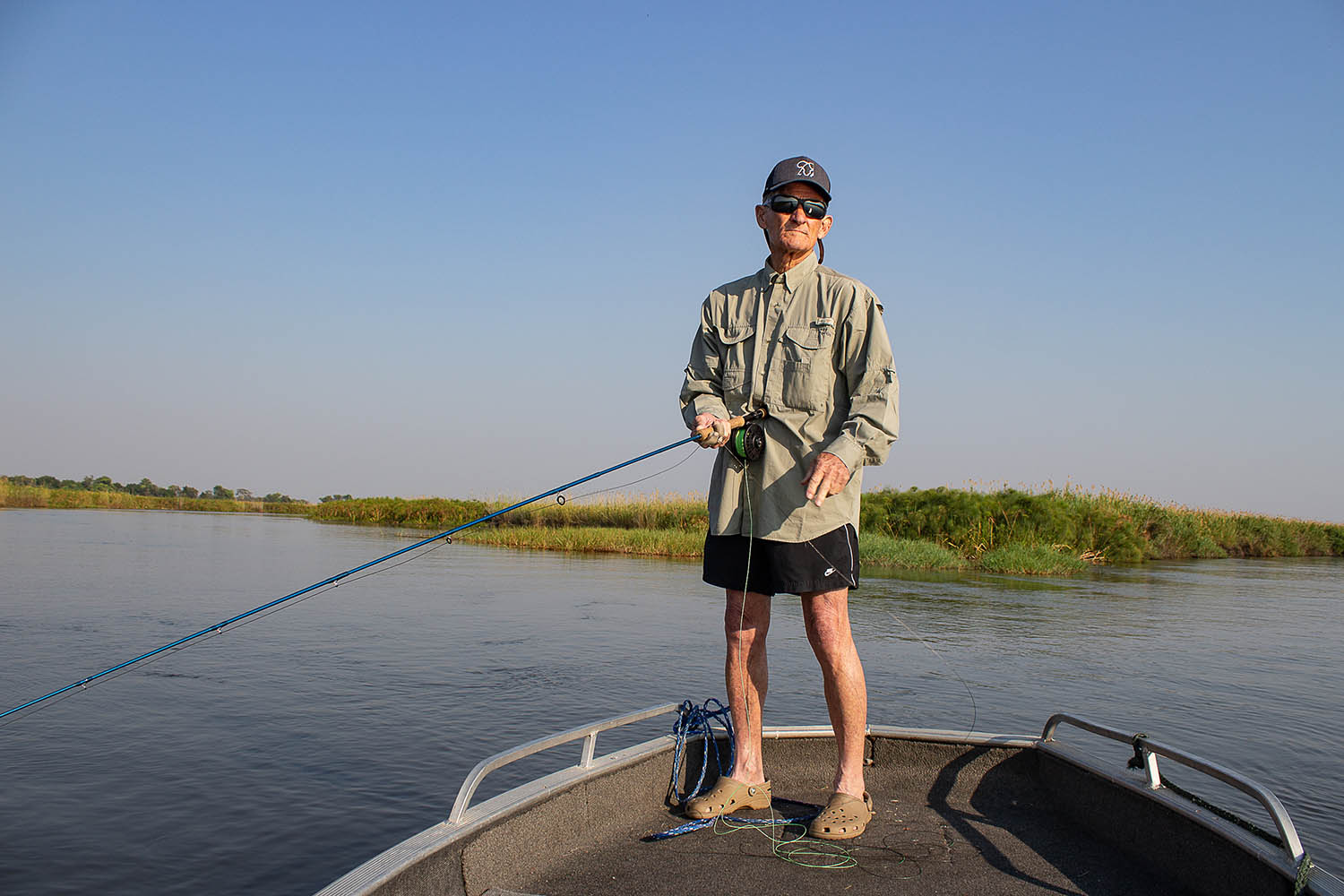 The thousand yard stare. Mike on scan for any sign of a catfish run. 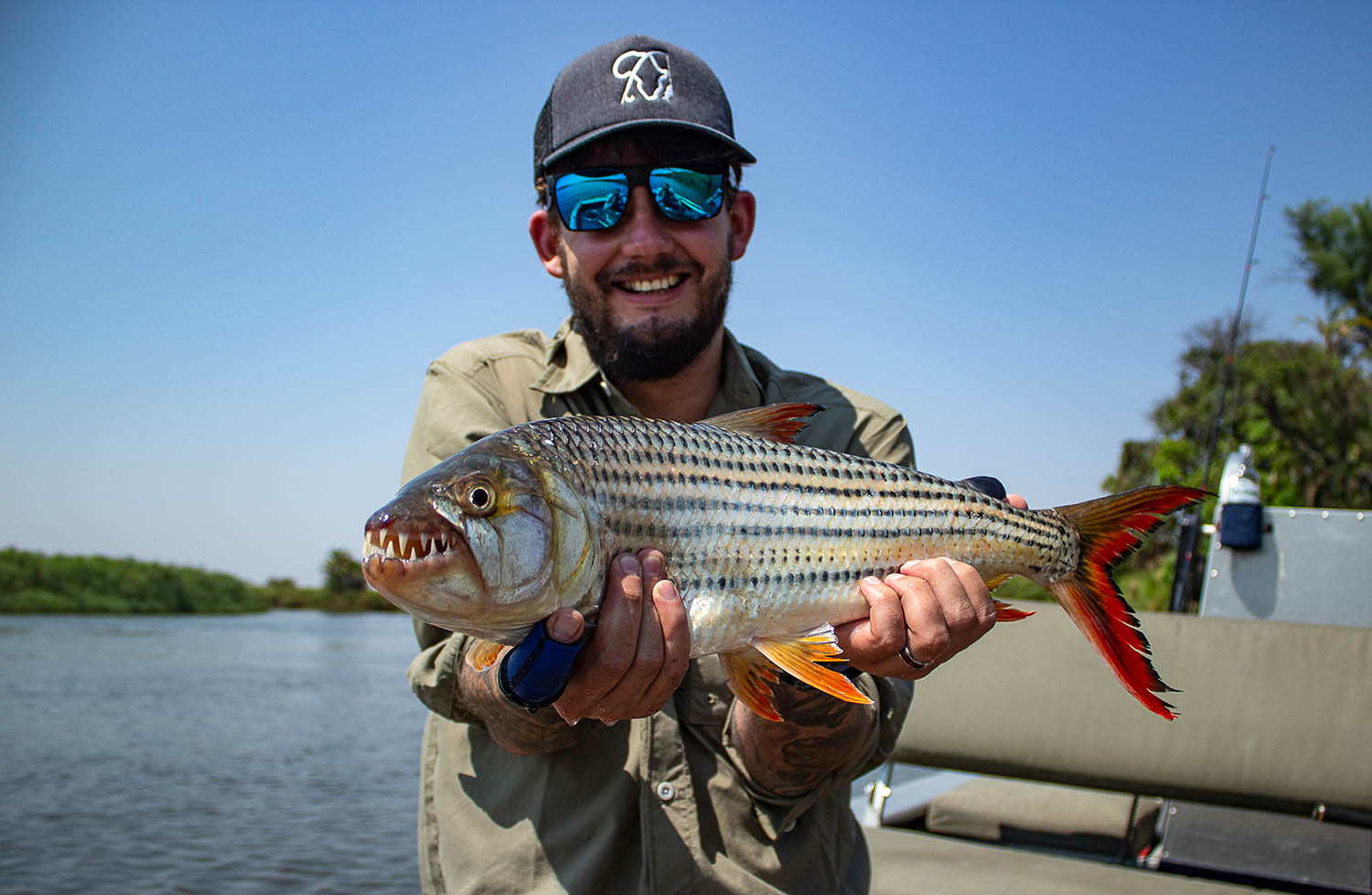 Jesse with his first tiger. Caught on an olive and red bucktail jig. 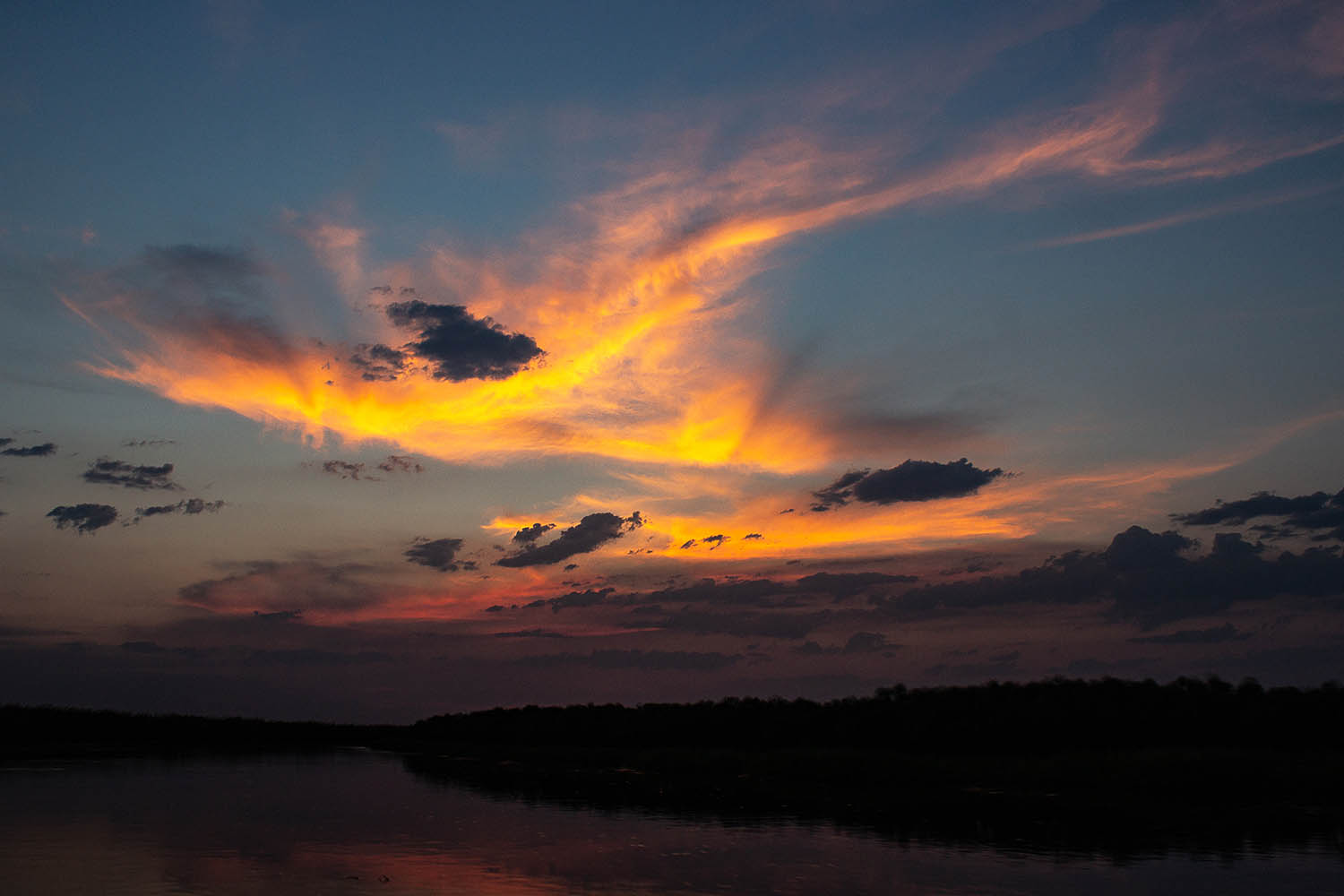 A typical set when driving back after a long, hot day on the Kavango River. 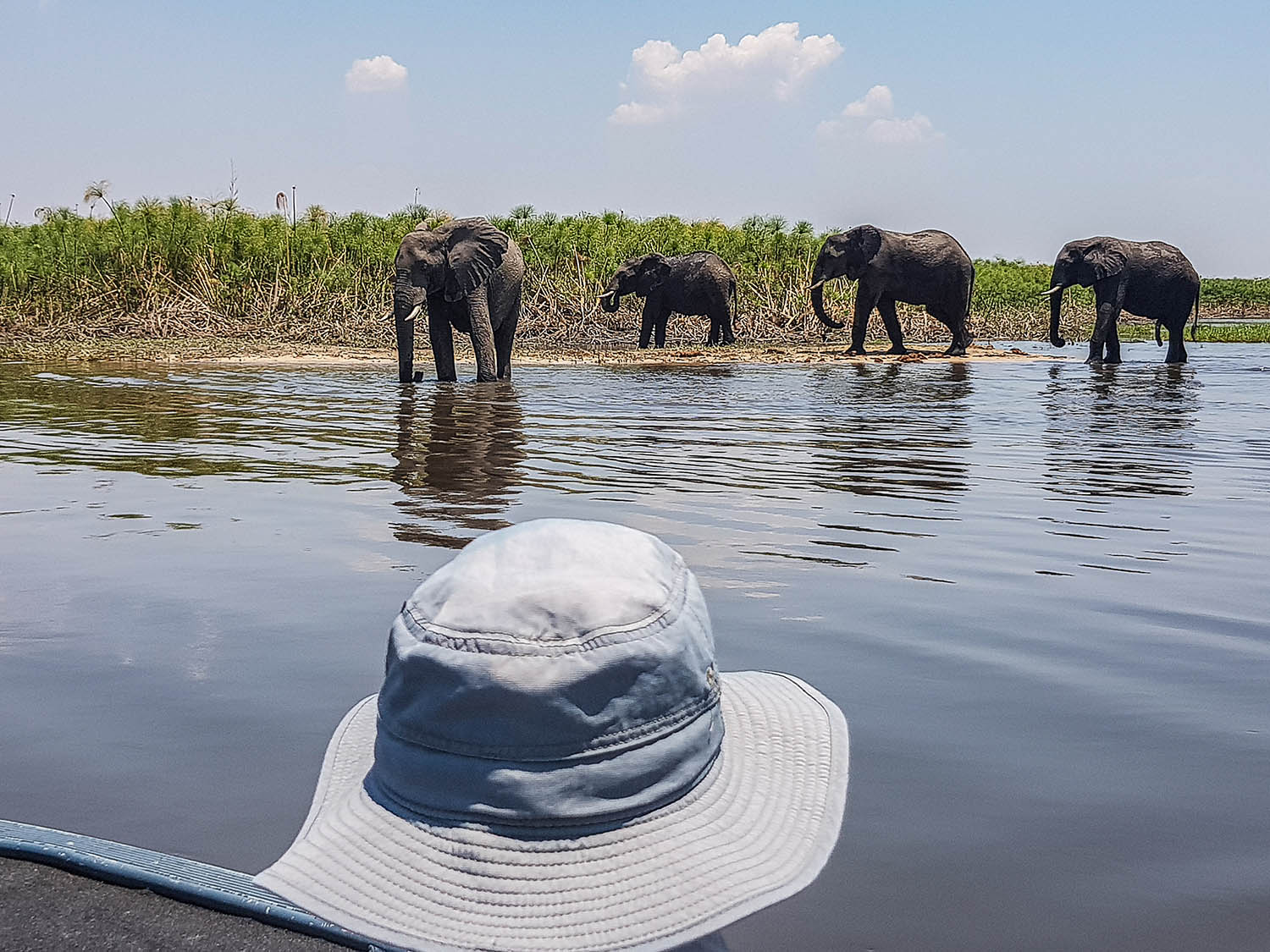 A big herd of about sixty elephant where in and out of the river during the course of the week. 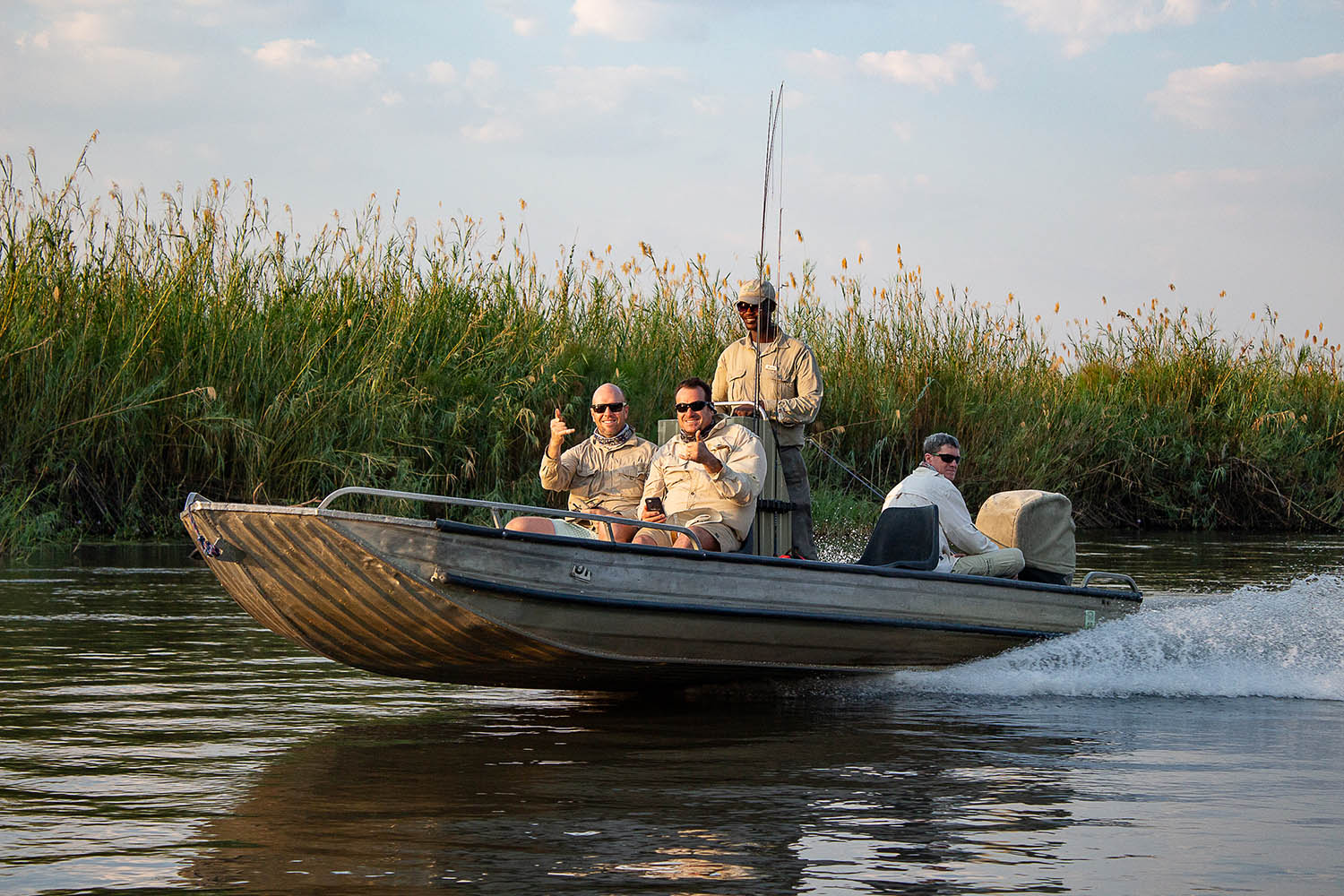 The Durban crew punching it in search of one last run for the day. 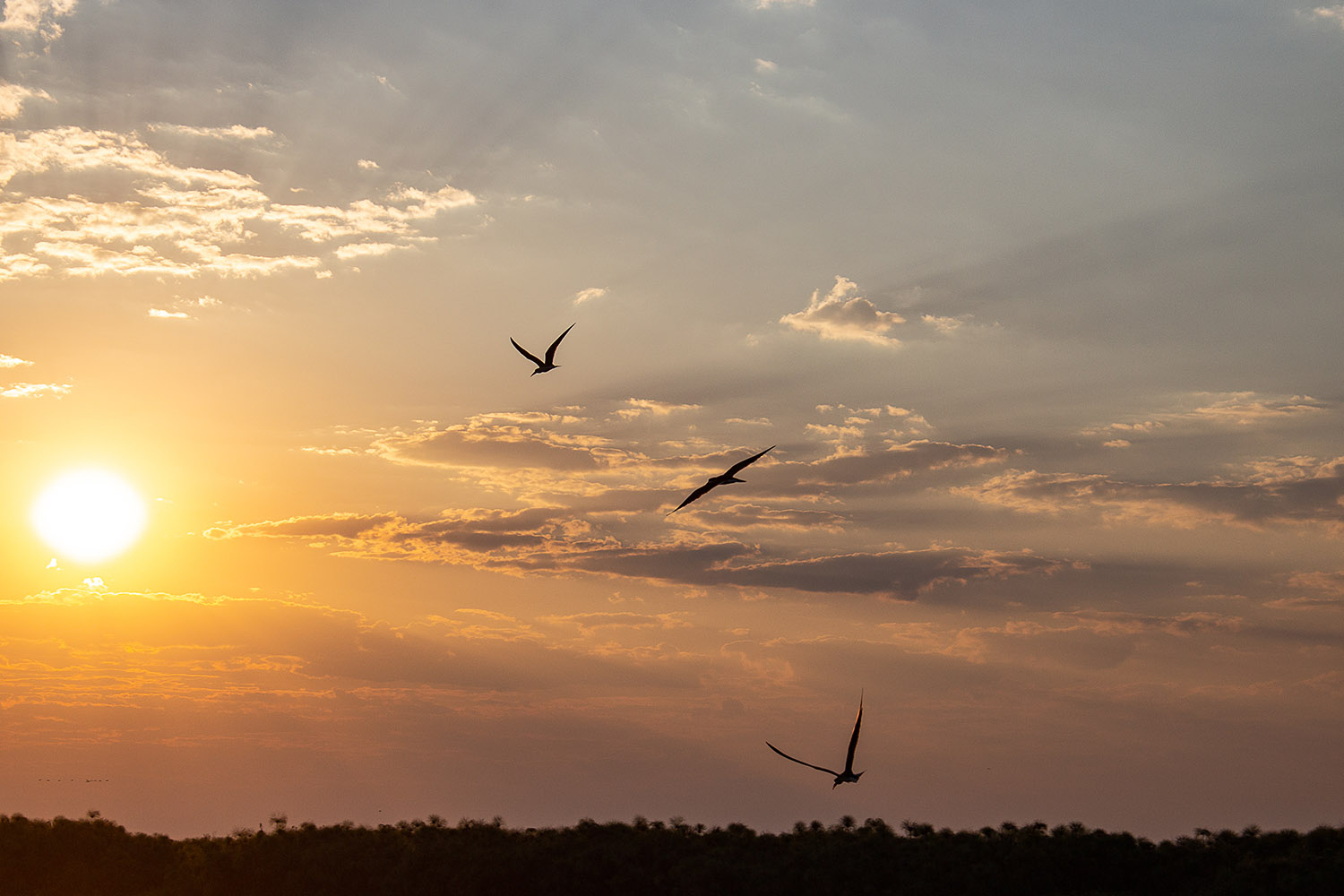 African Skimmers gliding effortlessly with the African sunset as their backdrop.
PrevNext