Our second group of the season consisted of Mark, John, Cavan and Mike (whom they nearly left behind in Maun). Luckily the whole gang made it to Shakawe for a few days of good fishing. The water level was getting better and the fishing was also improving. Strong winds were on the move and it was going to complicate the proceedings, but we were not going to let the breeze get in the way of a good fishing trip. 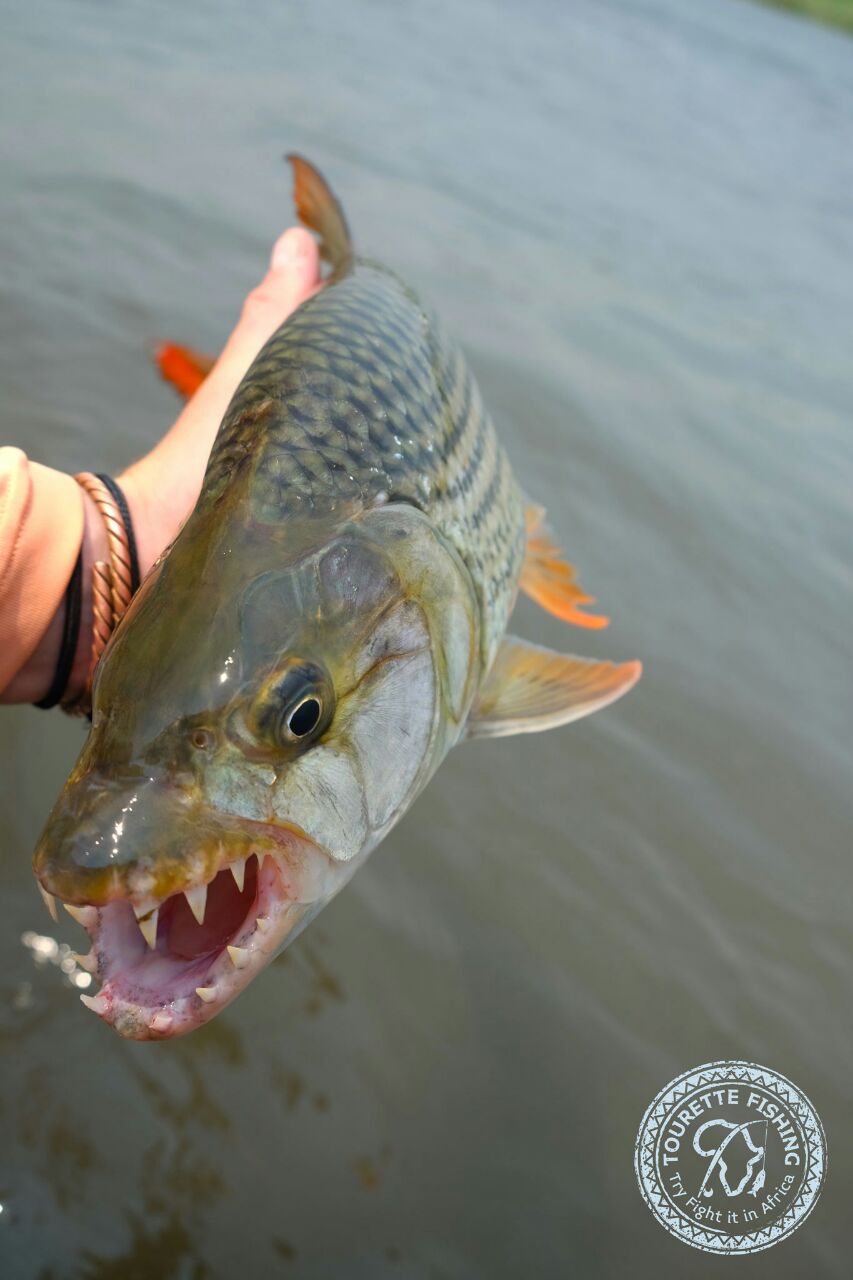 Business end of the swomp tiger

On day one, about five minutes into the first fishing session, Cavan was on the scoreboard with a nice Tigerfish followed by Mike who coaxed a pretty Thinface Bream out of its hiding place. The runs were deep in the papyrus so I followed a flock of birds down a narrow channel in the hope of getting closer to the action. The run was confined to the channel making it easy for Mike and Cavan to get their flies right on the fish’s nose, and off course they ate them like hotcakes. It was a slow start for John and Mark, but they soon found their fishing-mojo and made the best of the afternoon session.

Bill and his wife Sue joined us on day two. They came down all the way from the Moonshine State (West-Virginia, USA) for their 30th anniversary. It was their first encounter with the toothy beasts of Africa and as expected, it blew their minds. Cavan kept his early morning form and was first to get into the action with a healthy Tigerfish. Not too long after that Bill landed a 9lb Tiger and just to sweeten the deal he caught a 15lb Catfish on the next cast. Beginner’s luck? I don’t think so. Driven by jealous rage the rest of the guys began to fish as if their lives depended on it. It paid off for John who subdued and 8lb Tiger. As the runs began to slow down we drifted the open water to good effect. A happy yet exhausted group arrived back at Xaro lodge that evening as a fiery sun tucked in behind the floodplains. 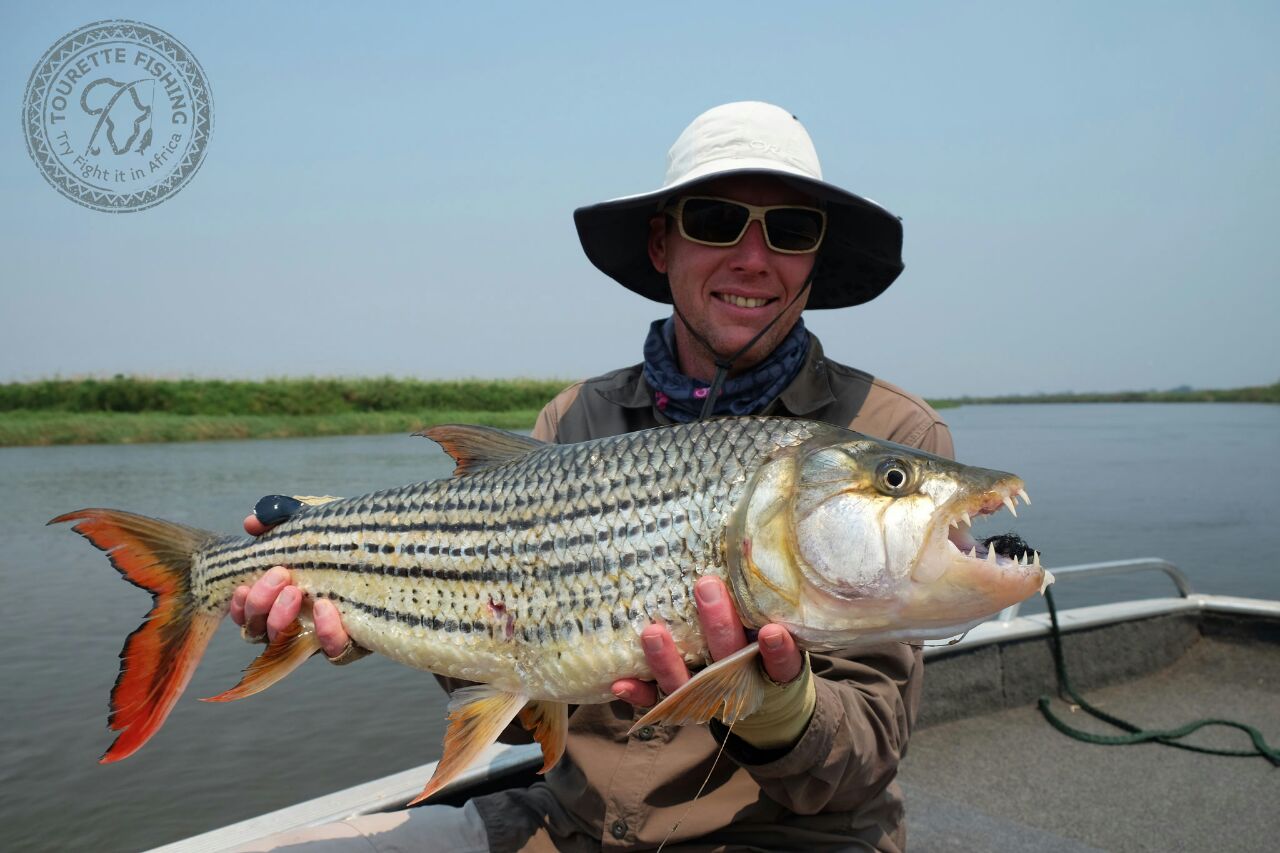 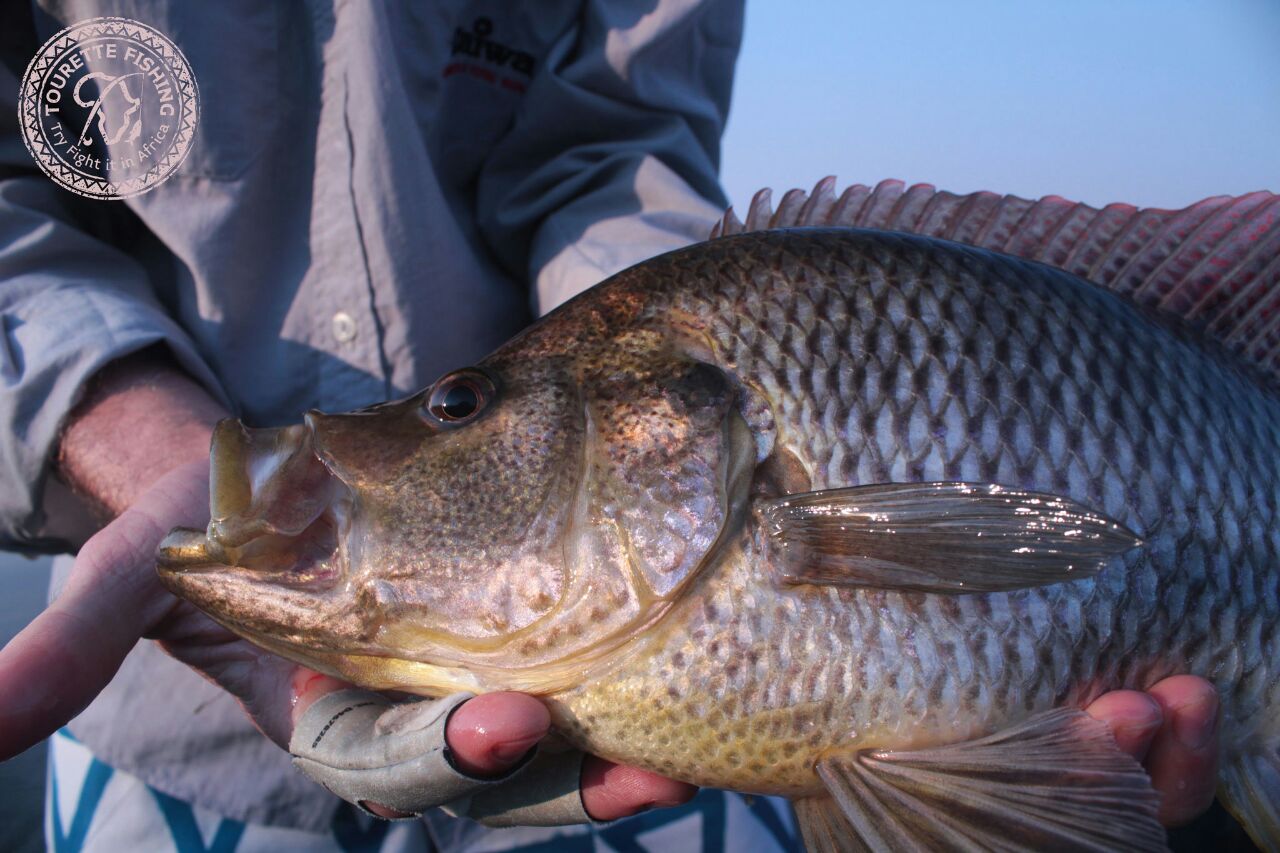 Cavan must be a morning person, because on the third day he was once again the one to break the ice. He started off with a 6lb Tiger and was soon joined by Mark for an early morning double-up. Mike’s luck with the species continued when he caught a Squeaker Catfish that was about the same size as the fly. Winds soon complicated affairs and the fishing was slow throughout the day. As dusk set in things began to change. Tigers began to smash baitfish in the open water and the guys were rewarded with an exciting session at the end of day three. 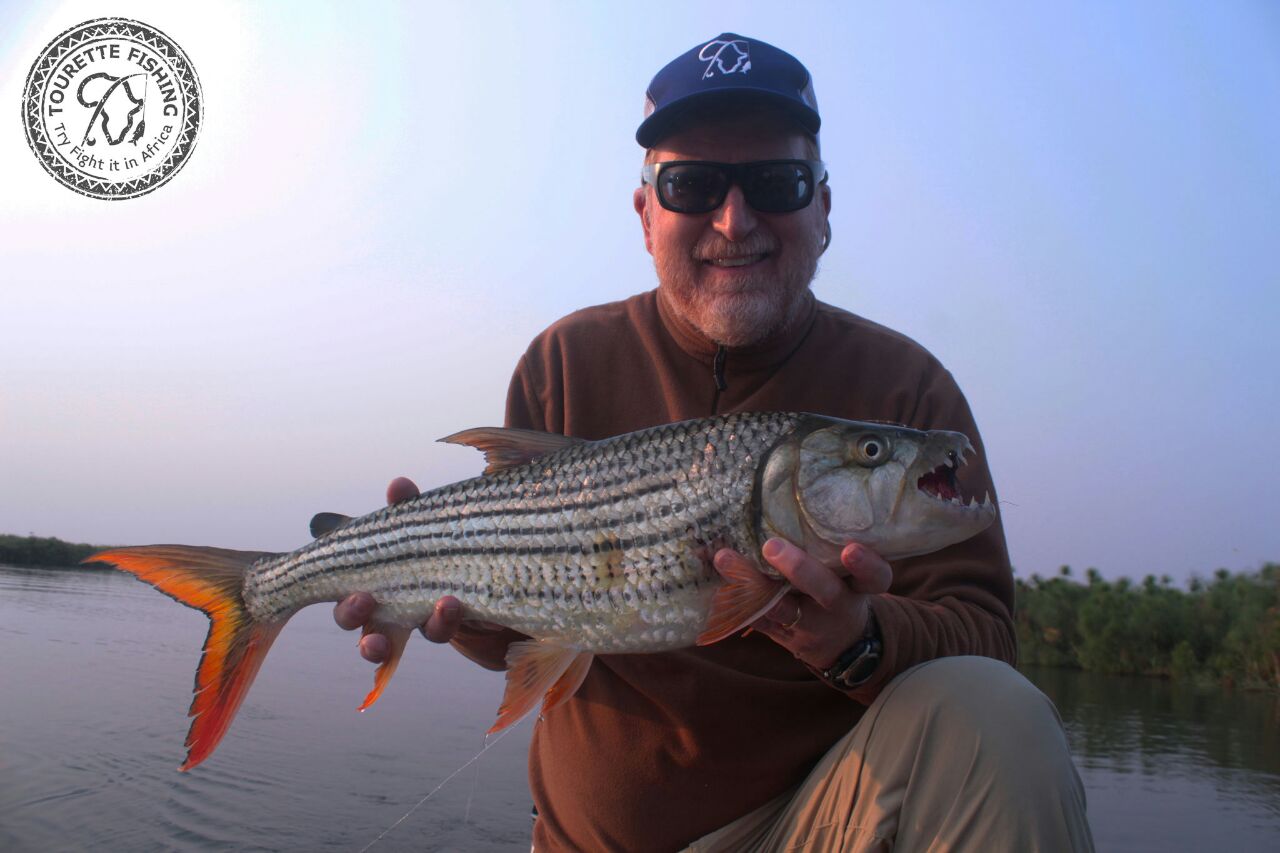 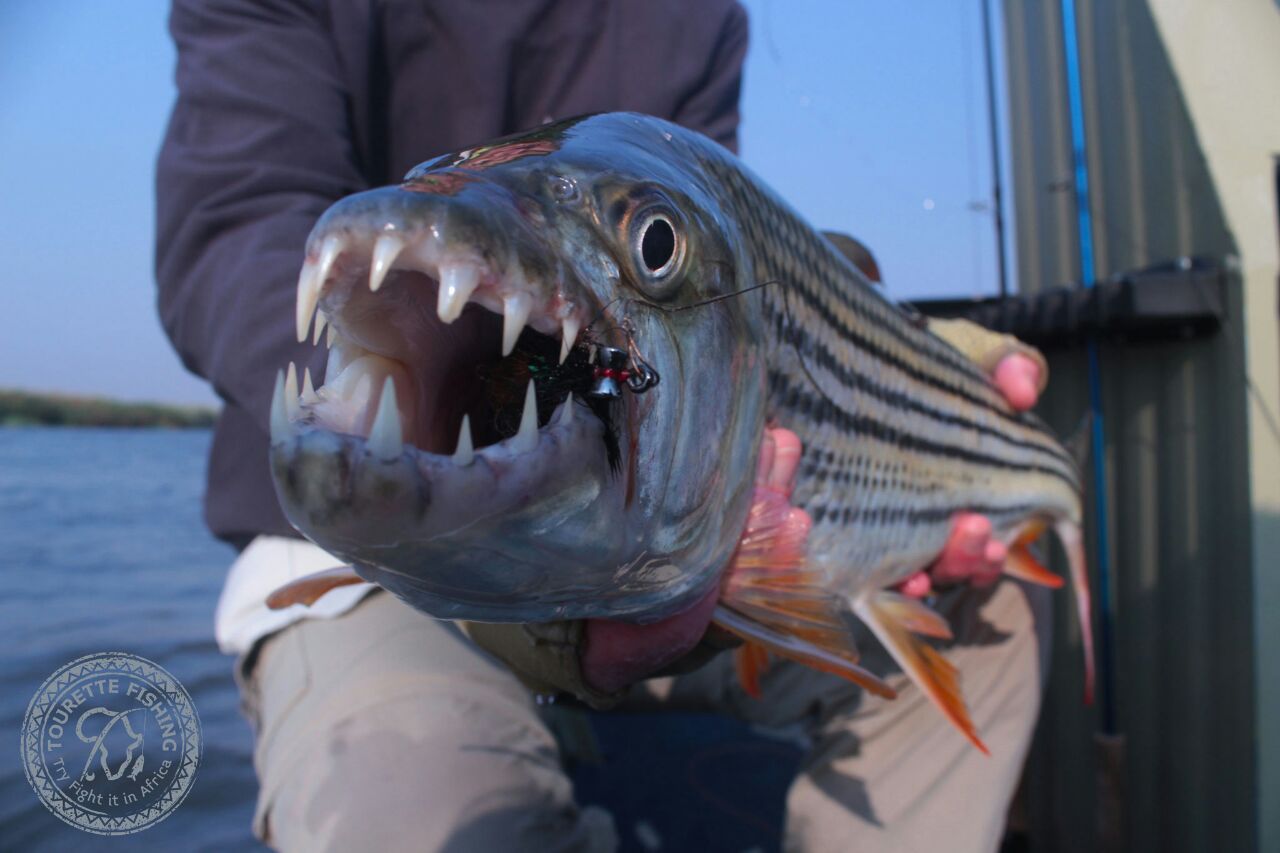 You dont want your finger inside that mouth!

Day four was a rather emotional day on the water. For some it was filled with moments of ecstasy and for others raging jealousy. The morning kicked off well with Bill landing a 6lb Tiger on the first run, followed by Mark who landed a personal best 8lb Tiger soon after. From there on the pickings were slim, the wind picked up and the fish went down. Lionel and I opted for an early lunch at Matsoabe Island. Stu just wanted to fish one more spot before they came back, and it happened to be the ‘honey-pot’. John and Cavan landed about a dozen fish in that golden hour. Cavan pulled the fish of the trip from the ‘honey-pot’, a gorgeous 12lb Tigerfish. It really was a trophy fish in every way. Meanwhile the rest of the clan was sitting on the island waiting for Stu to return with the missing lunch ingredients. We literally had to beg them to come and have lunch with us so that we could all get back on the water for the afternoon stint. The last session of the trip was a tough yet rewarding one. It was a spectacular sunset and the tigers were going off like fireworks, smashing baitfish in the golden light. Bill ended his trip with a fish on his very last cast, what more can a man ask for?

It was a pleasure to have these fine gentlemen and lady on the water with us.

Until next week, cheers 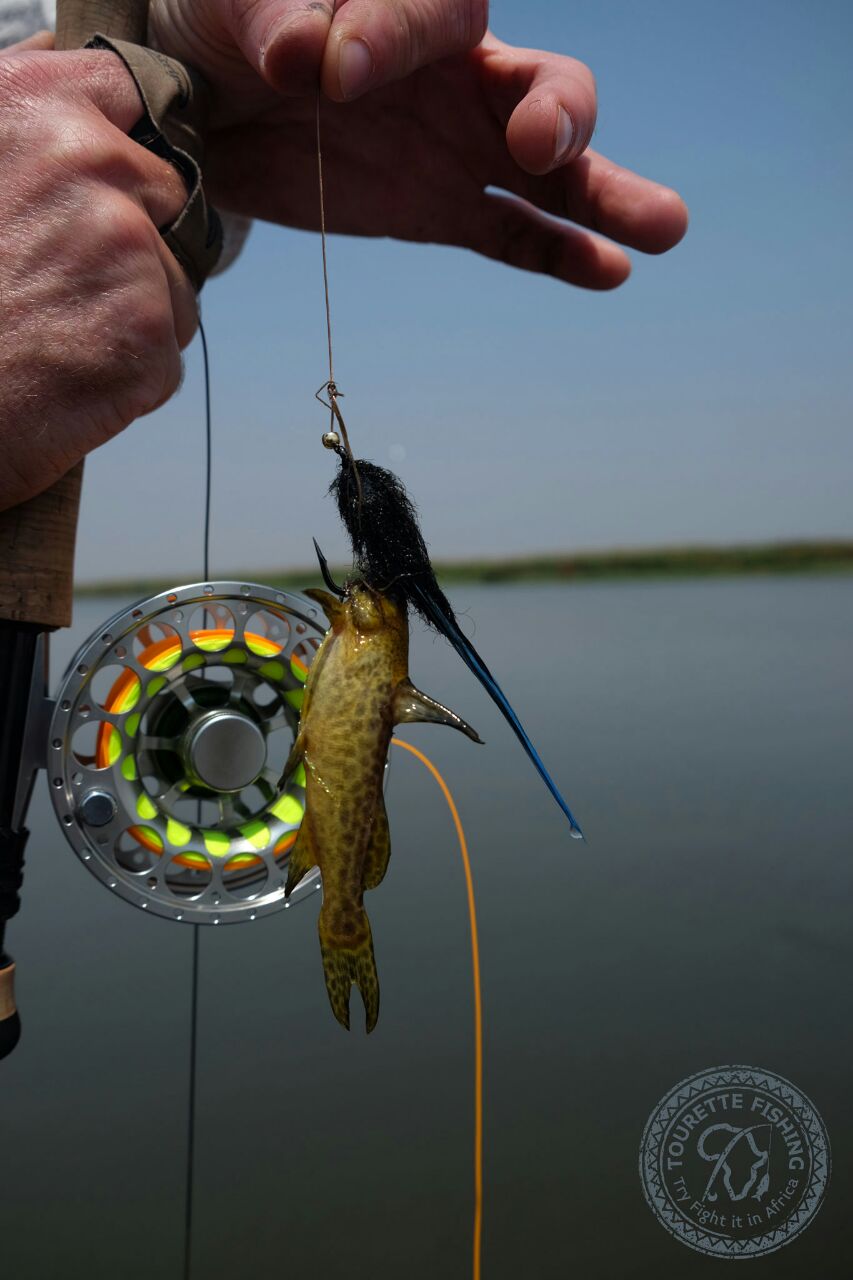 This little guy was quite ambitious 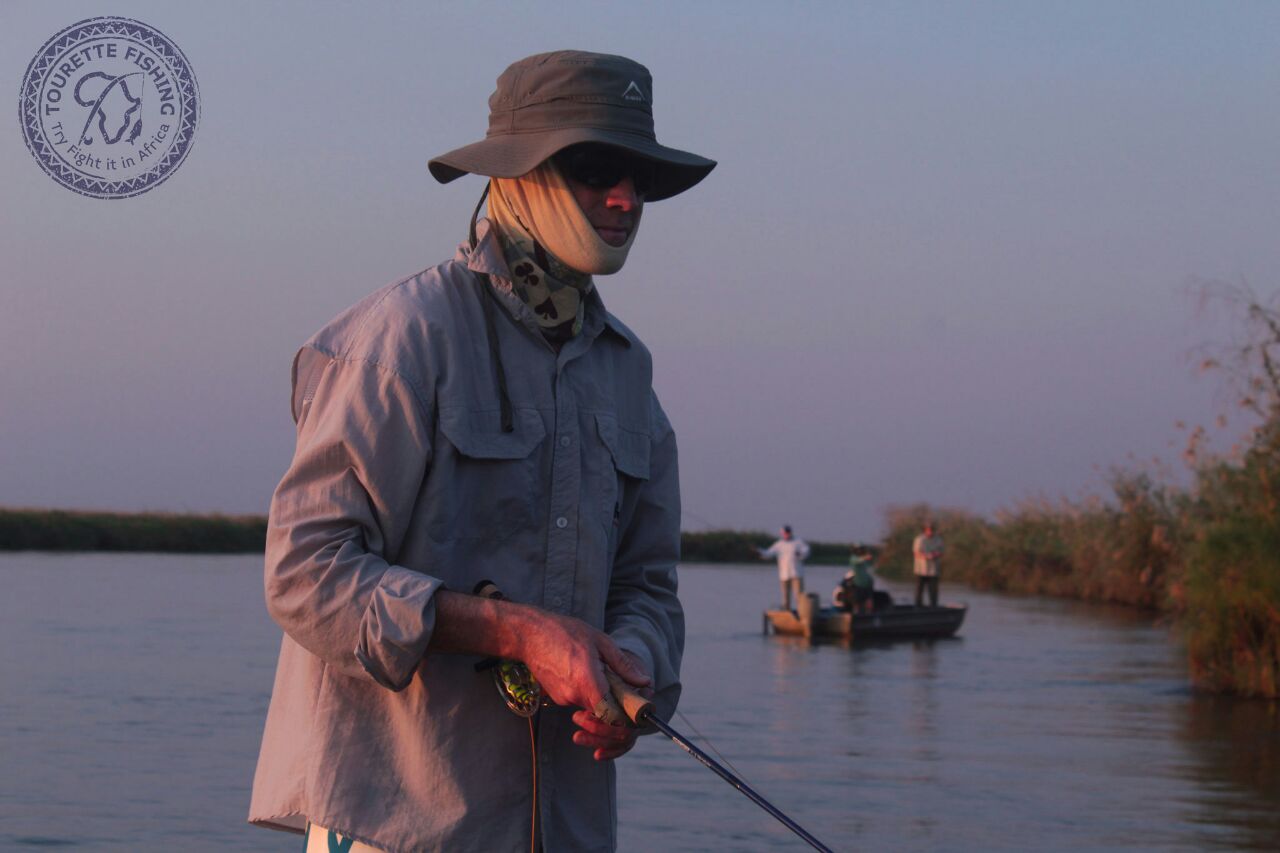 Fishing the runs at sunrise can be very productive
PrevNext