The life of a fly fishing guide is very often filled with moments of crisis control. Jan and Hagen’s trip was one of those times of crisis. First off, Lionel’s boat which had been niggling with starter issues for a few weeks finally decided to take early retirement from guiding service and broke down the morning of our guest’s arrival. For Lionel, the bush-mechanic, this was a mere obstacle to overcome, the only problem was that Lionel was half way to Maun to fetch another guest, Jan. My feeble attempts to revive the old two-stroke beast failed time and time again so I decided to quit and wash my petrol covered body. Instead of playing grease-monkey I opted to enjoy my ‘off-day’ and wait for Lionel to help me fix the boat once he got back. At the high-point of my relaxation I received a worried phone call from Ashley, camp manager, who said that our other guest Hagen had arrived a day early and was waiting for us at Drotsky’s Lodge. In a mad scramble we arranged a boat and I was on my way to fetch Hagen and take him down to camp. Upon arrival I found Hagen in a state of sheer panic and confusion; it turns out that he got lost twice on his way to Drotsky’s and was fined for speeding in Shakawe. Eventually I got him down to camp and things began to fall into place, or so I thought. Lionel and Jan pulled in at our base camp just in time for dinner, but off course something had to go wrong; Hagen forgot his camera and car keys at Drotsky’s and so we headed back up-river to find it. On a positive note, Jan saw wild elephants for the first time on route to Drotsky’s and we managed to locate Hagen’s camera, but not his car keys (he discovered them in his pocket the following day). 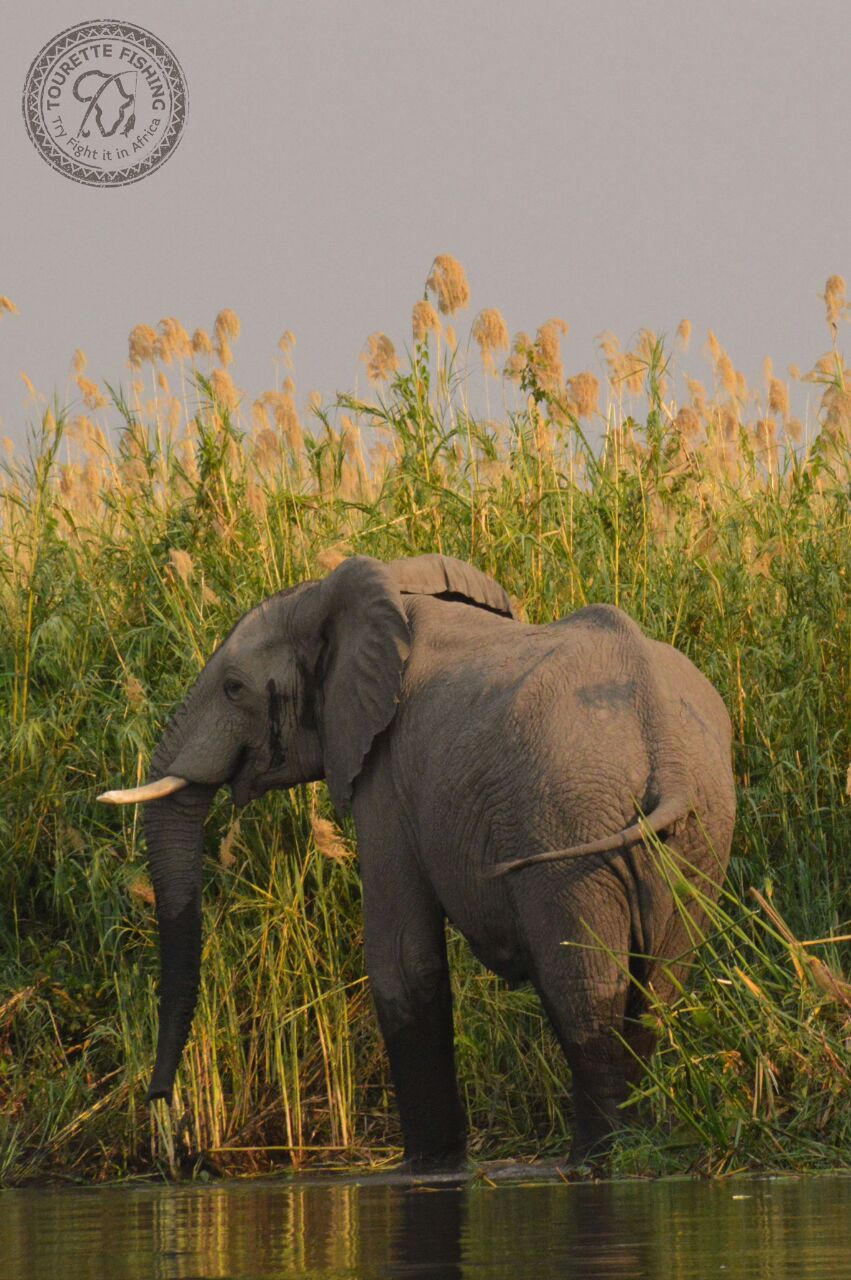 The first day out was a good practice run, especially for Jan who got jumped by a couple of large Tigers. He soon realized that the trout-strike was indeed the best way to lose a tigerfish and once his body learned to suppress the urge to lift the rod tip things came together. A few catfish and one tiger later the day came to a close. Lionel had the pleasure of taking the guys out for their second day. They found a slow run that had was already being fished by other anglers. Things were looking tough, but Lionel’s fishy-sense told him to stay a while longer. All the other boats left the scene and the run came to life. The catfish went wild, baitfish scattered out from underneath the papyrus only to fall victim to striped beasts with razor sharp teeth. It was a massacre and Jan capitalized. His line went tight and line screamed off the reel as an eight-pound Tiger savagely smashed his fly after the first few strips. The fresh muscle memory from the day before served him well as the fish finally rolled into the net. Three more fish over seven pounds soon followed and needless to say Jan was satisfied beyond measure. Hagen, inspired by his friend’s performance, fished with a new found enthusiasm and was rewarded with two lovely tigers. 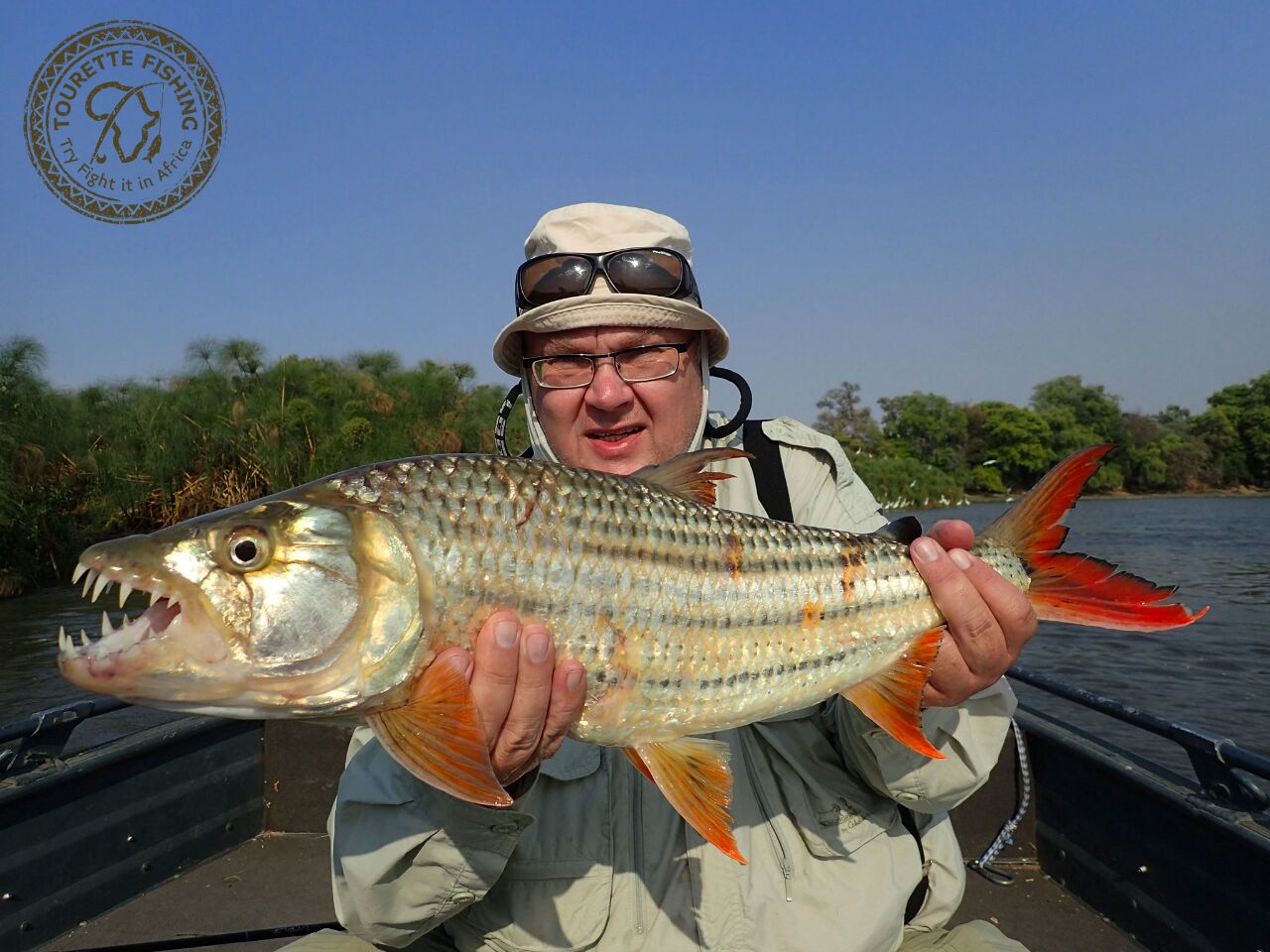 Jan getting in on the Okavango tigerfish action

For those of you who are familiar with Murphy Law would understand that Murphy can be a real jerk sometimes. As you already gathered from the first paragraph, Murphy was pretty busy on this trip, in fact I think he planned it. Jan ordered a 9wt Echo rod from Tourette Fishing that was brought up with all our other supplies when the season started, but as it turned out there was a slight miscommunication in the office and instead of a 9wt, a 12wt rod was sent up. This was supposed to be Jan’s back-up 9wt for the trip and guess what happened? He broke his Scott 9wt on the second day, thanks a lot Murphy! Luckily for us Jan had packed an 8wt Sage that served as a good back-up rod for the rest of the trip. Thank goodness, this one didn’t break! 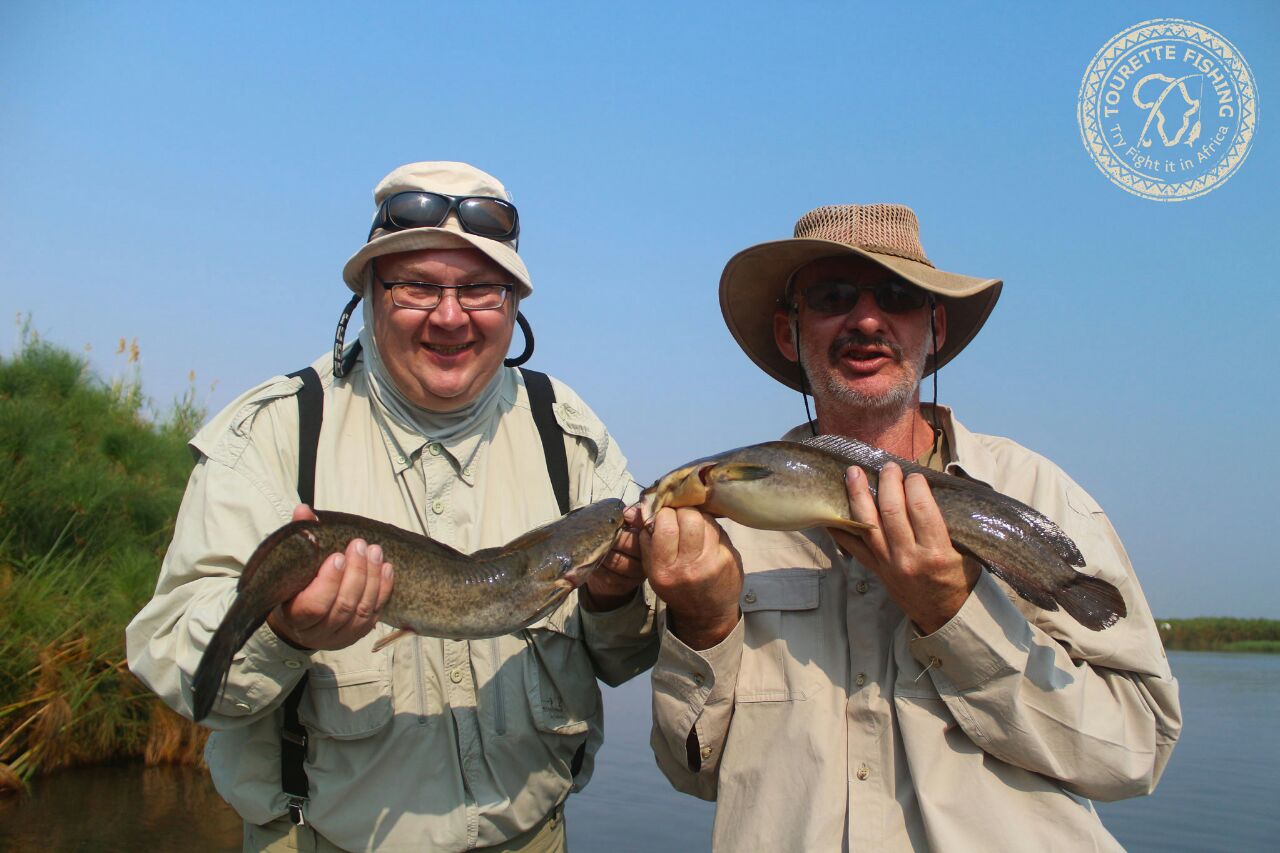 On the third day we found a run above Motsoabi Island that was steam-rolling through the marginal vegetation. The Catfish were on the rampage again and no baitfish was left undisturbed. It was a feast for the Cats, but the howling wind left the Tigers with lockjaw. It was only as the wind gave way that the Tigers came out to play. Jan landed a few Tigers on the minor side of the scale and was left in pure disappointment when a bus Tiger smacked his fly and the hook pulled on the jump. Hagen also felt the burn when a good fish caught him napping and left his line in a complete tangled mess. Tigerfish 1, fishermen 0. Welcome to Africa boys! The following day continued on the same trend with the Tigerfish reigning champion, until Hagen landed a six pounder (his personal best). The man could not suppress his joy and had to let out a ‘yodel’ that would melt the ice off the Swiss Alps. 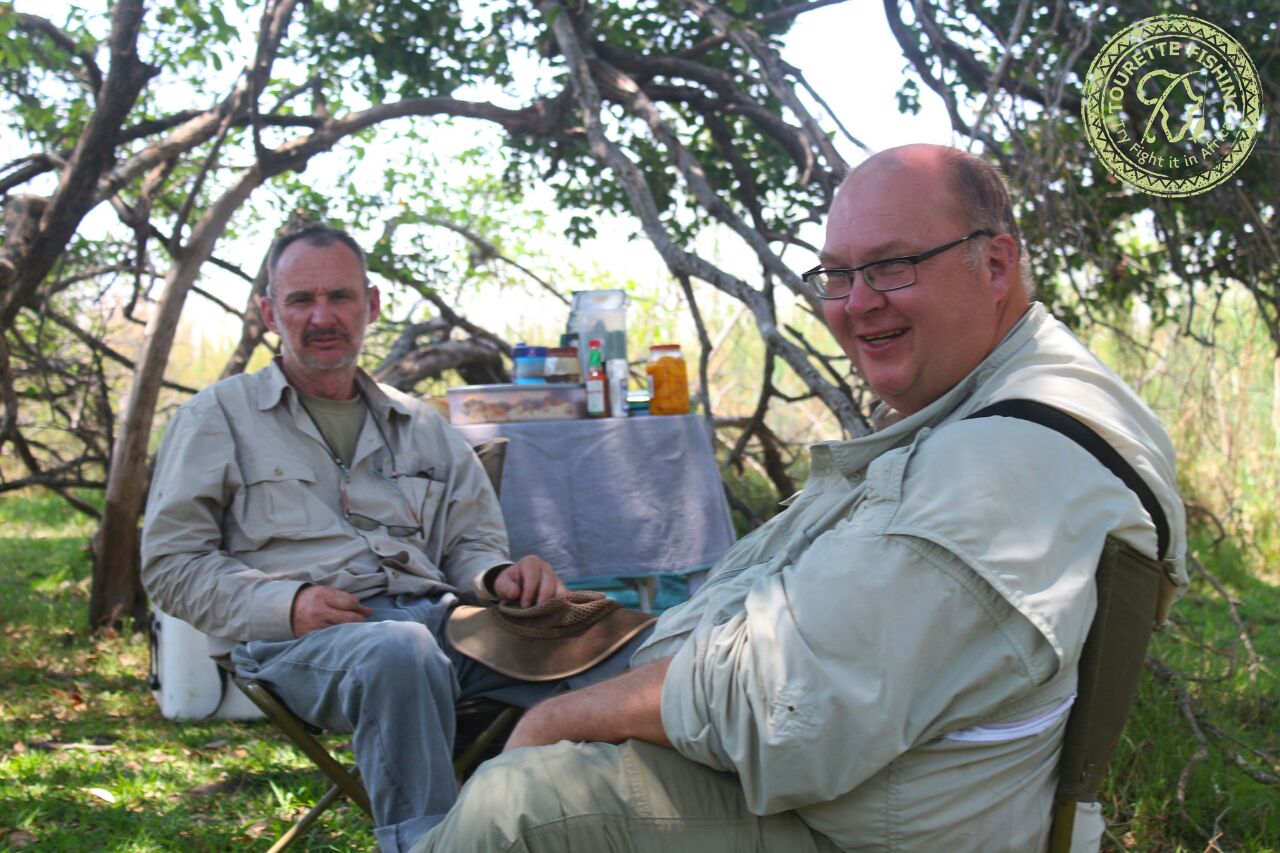 Murphy was working his magic again on the fifth day; we were on our way down to Moonlight Island when the boat decided to quit on us again. Despite my best efforts to avoid such situations I was called up for involuntary grease-money service once again. With the motor out of action I had to pull the boat to the closest piece of dry land. The only way to do this was by casting the anchor towards the land and pulling the boat closer, and repeat and repeat and repeat. About two hours later Lionel came to our rescue with enough spare parts to resurrect the Titanic. After another hour of grafting we finally figured out how to coax the motor back to life. At three that afternoon we finally had lunch. We wrapped up the day by punishing an entire pre-school of Tigerfish. The sixth day on the other hand was not a small fish day, in fact it was the day of the ‘bus’. Half-way up the Kalatogho channel Lionel found a tiny run and directed Jan onto his first ten-pound Tigerfish. It was stellar guiding from Lionel under tough conditions and it paid of ‘ten-fold’. 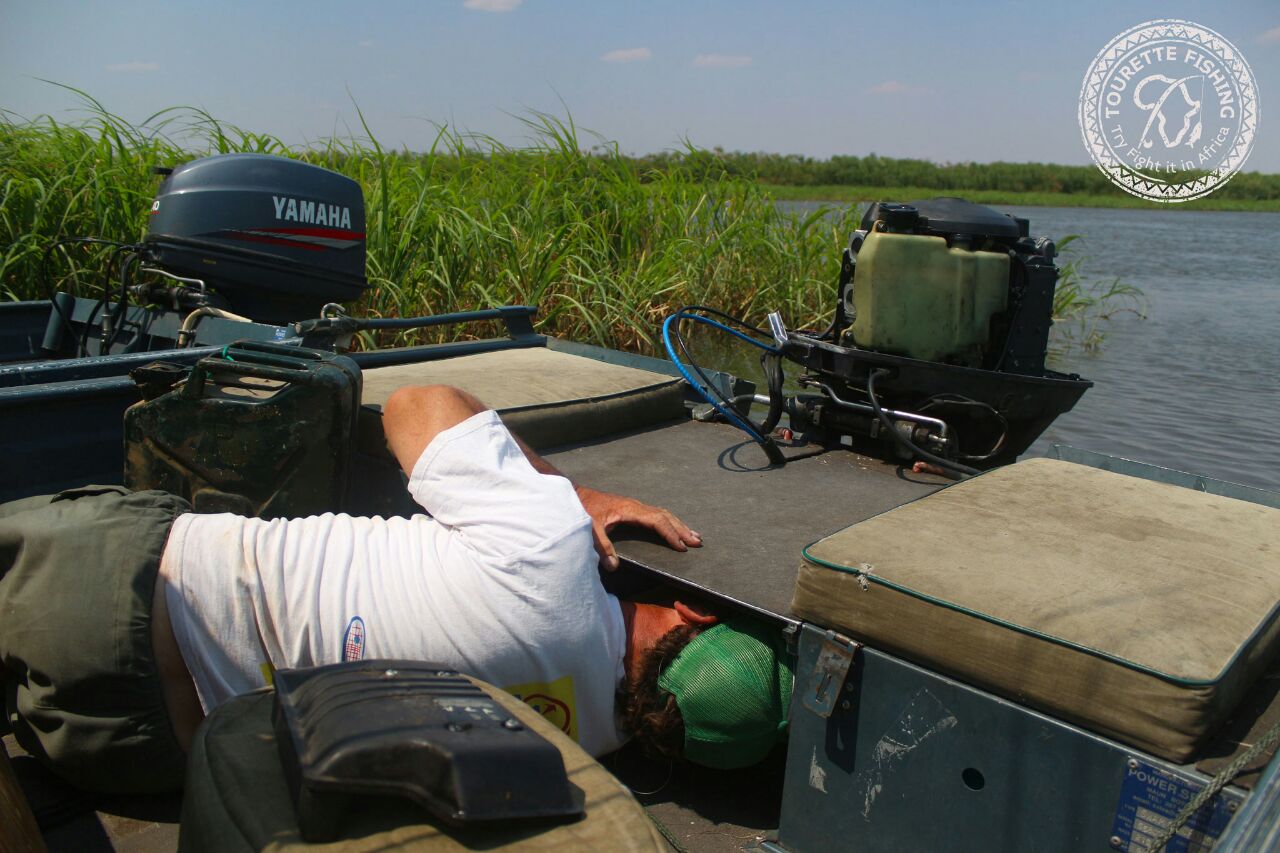 A fly fishing guides job is multifaceted. Lionel running some bush mechanics on his boat 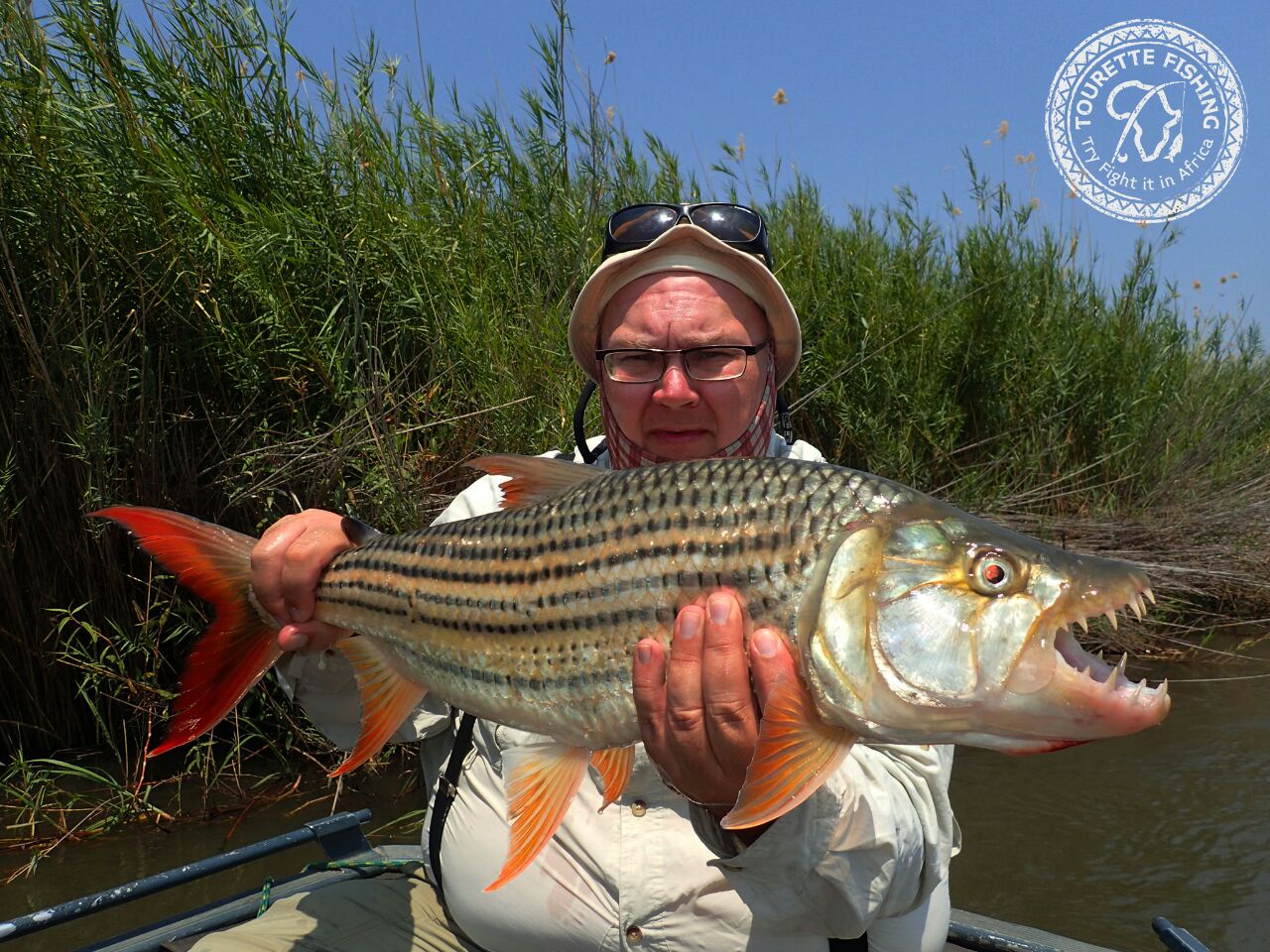 The seventh day was rather uneventful. The long, hard days in the sun had slowed the guys down and fishing in the blistering heat didn’t improve the situation. The runs were scares and the Tigerfish, even more so. By 11:00 we had been all the way down to the Phillipa Channel and back and it was time for a fuel change. Because we had already burned through one and a half tanks of fuel I had to syphon fuel from the spare jerry can. I underestimated the size of the syphon and ended up sucking in a massive gulp of petrol and Murphy struck again. It was unpleasant to say the least and the rest of the day I felt like a fire-breathing dragon. Amidst this sequence of nauseating events Jan missed nine Tigers and finally landed the tenth. Ten must be Jan’s lucky number because the following morning he kicked off proceedings with yet another ten-pound Tiger. For Jan this trip couldn’t get much better, but as a matter of fact it did. On their last day in the Delta the fishing was slow, very slow and a scorching wind swept over the water. The found refuge on Moonlight Island a waited out the weather. By mid-afternoon conditions became bearable and the search for one last tiger began. We covered many miles without seeing any sign of and the fear of a blank day became real. Just as the depression started to creep in I saw a flock of Egrets fighting over baitfish and the hope started to grow. It was a run in a side-lagoon and we had it all to ourselves. 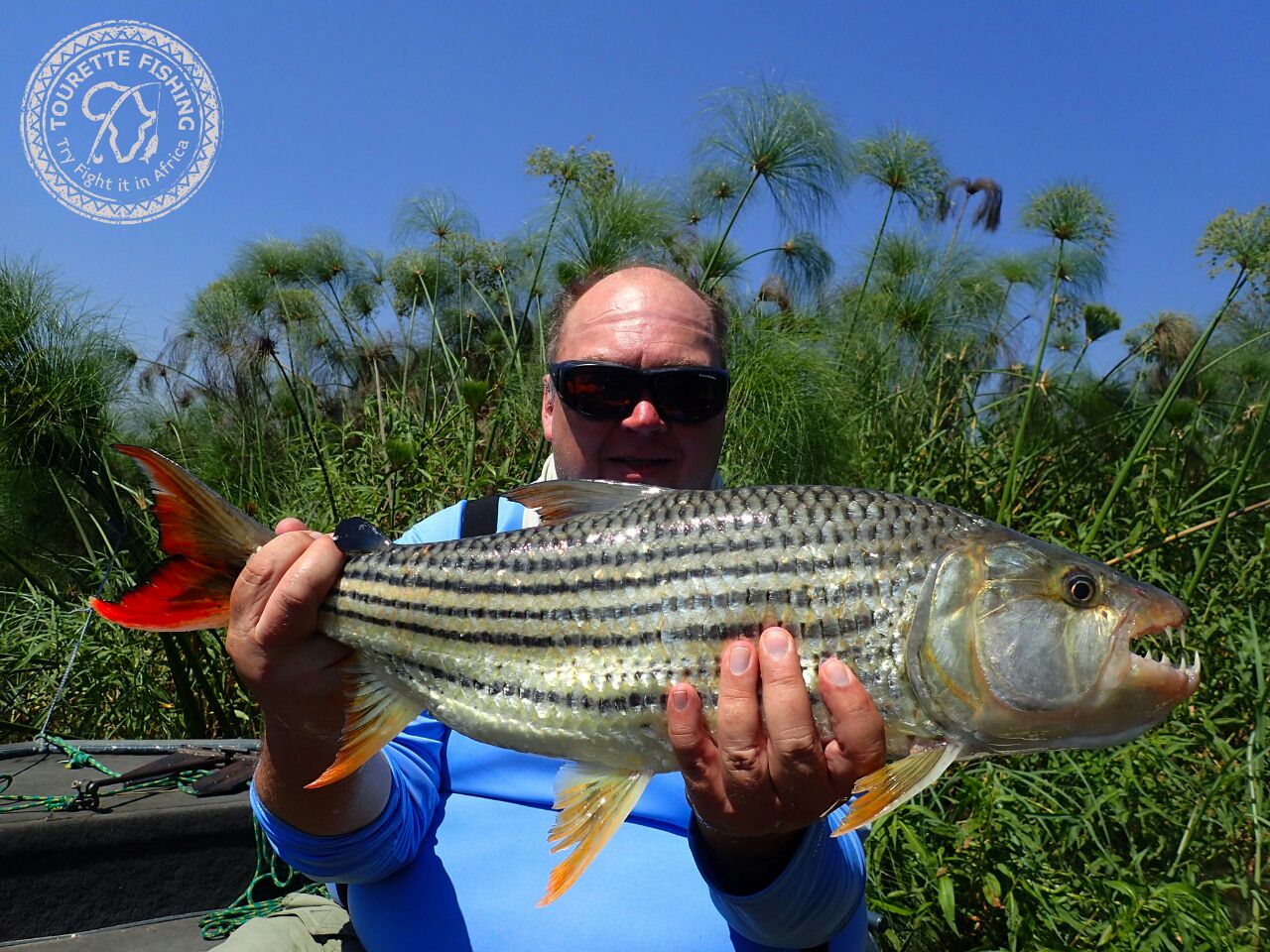 Jan’s fly kept getting smashed right as he lifted up to cast, and that’s when I took a bold step and strapped up his spare rod with a surface fly and floating line. Reluctantly he made his first cast, strip, strip, strip… and smash! The combination of amazement and disbelief on Jan’s face was priceless. He soon landed his first Tigerfish on a surface fly and the man was hooked. It was the perfect way to end the trip and Murphy finally left us in piece. It was a bizarre trip with ups and downs like a roller coaster ride and another magical experience in untamed Africa.

Until next time, cheers 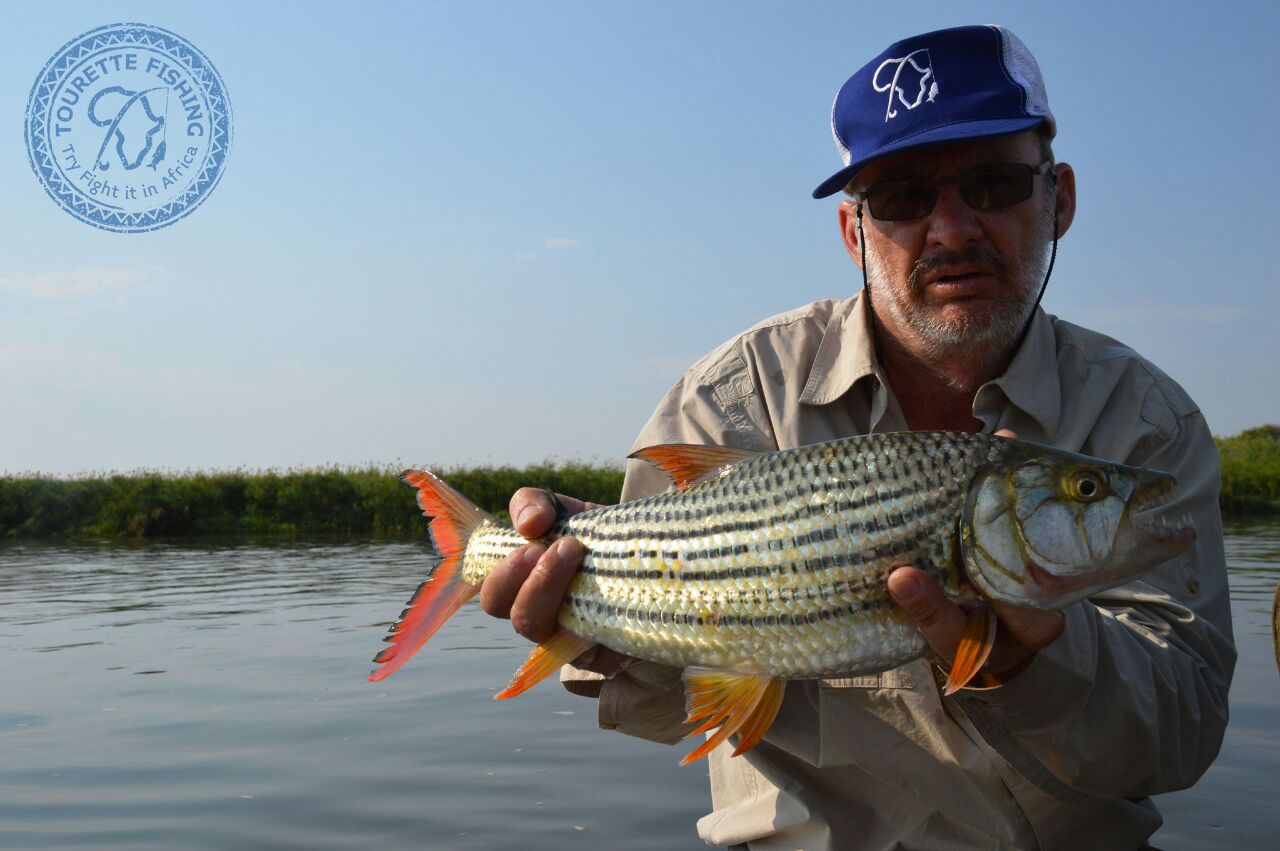