The second group of the Sudan 2017 season was filled with many new experiences and huge learning curves for our anglers. Robbie, Sandro, Steve and Greame joined us for the week. They have fished with us on several occasions, but this was their time to brave the salty waters. Gilberto joined us from Brazil and Johan from Sweden completed the team. On the morning of our first day we set sail to a coastal reef section close to port for a session on the flats. 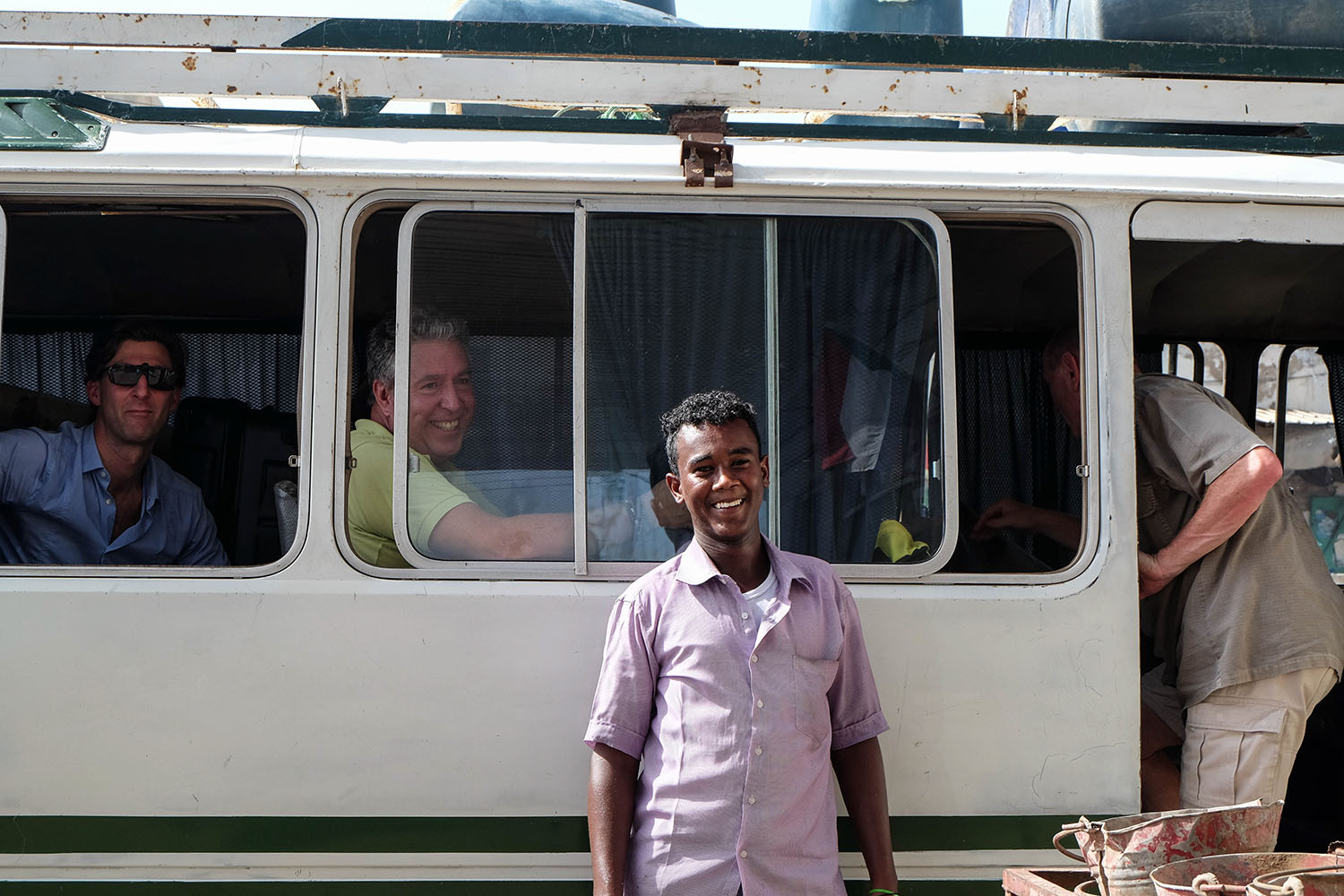 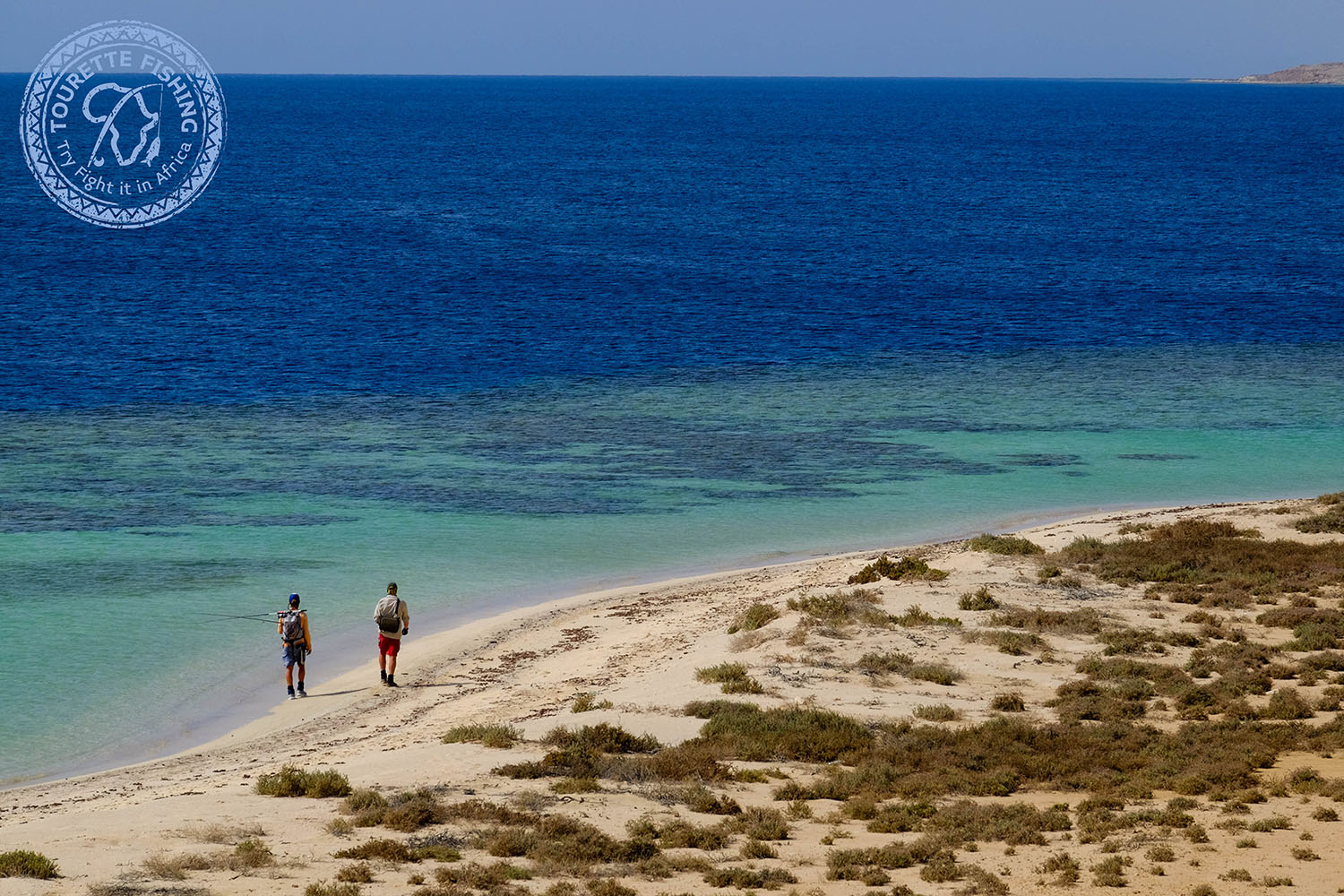 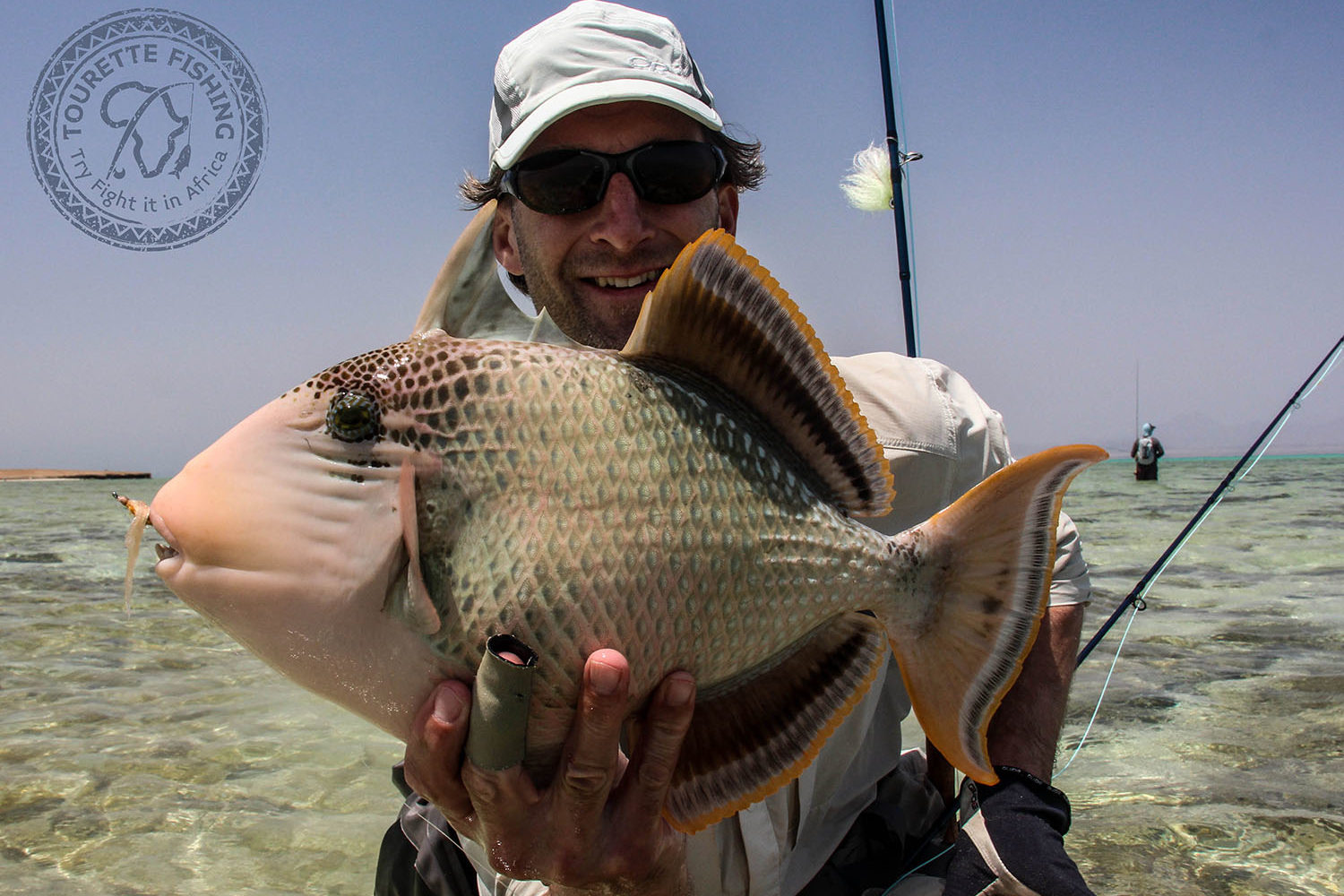 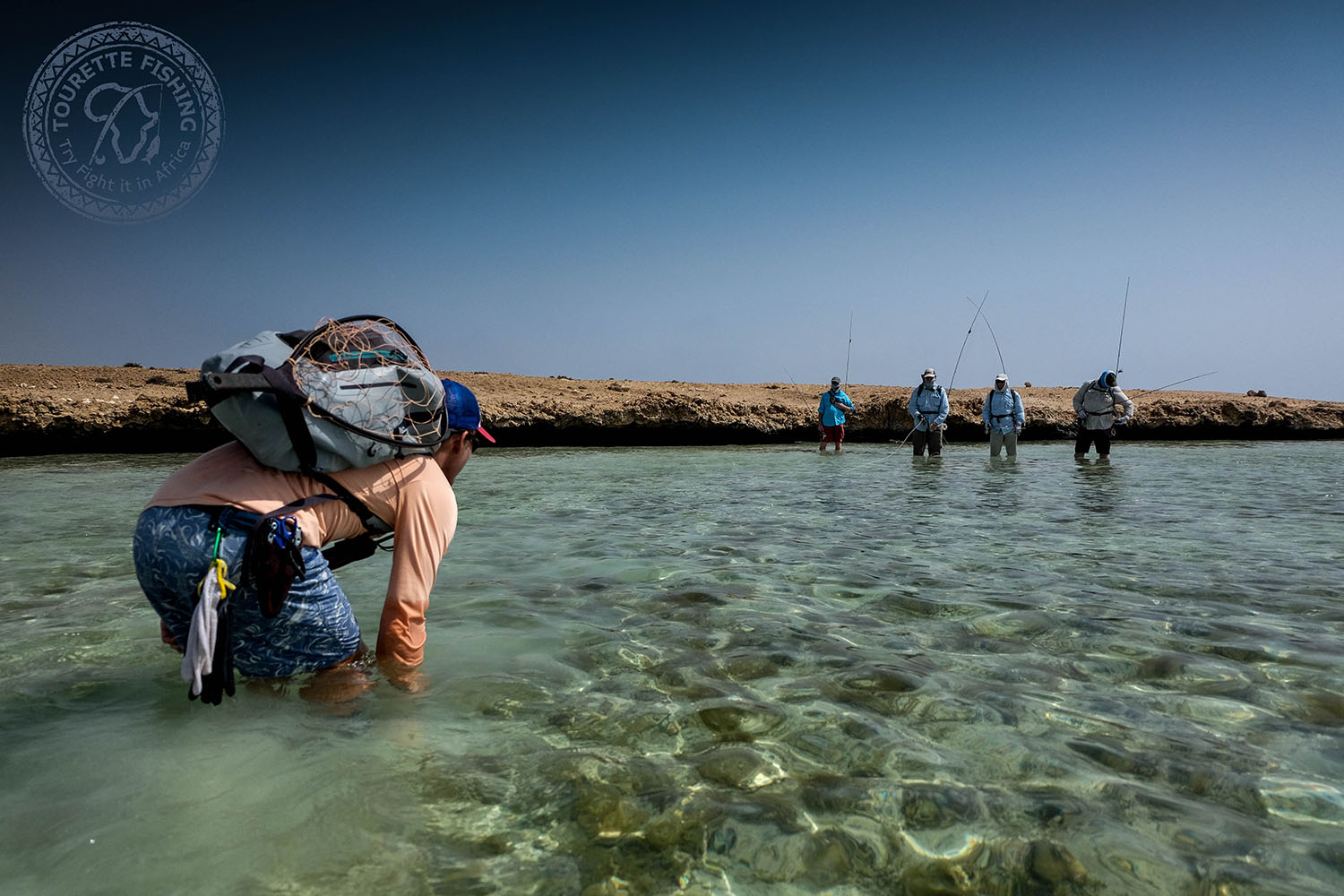 On day two we sailed North to a massive in-land lagoon with spectacular coastal flats to the North and the South. Stu took they guys teasing off the edge of the reef. For Sandro it was a bittersweet session as he connected with two GT’s that were convincingly over the 100 cm mark, but managed to pop his leader and fly line on both occasions. In the afternoon, I waded the inner flat with Greame and Steve. Apart from the occasional garfish the wasn’t very productive, but to Greame’s delight a little picaso came knocking.

The third day was an action-packed day. We waded the edge of the reef and you could say get ready there was a shark with a bunch of trevally on its back. By some miracle the flies went in and both Steve and Johan went tight. Steve landed a good bluefin and Johan 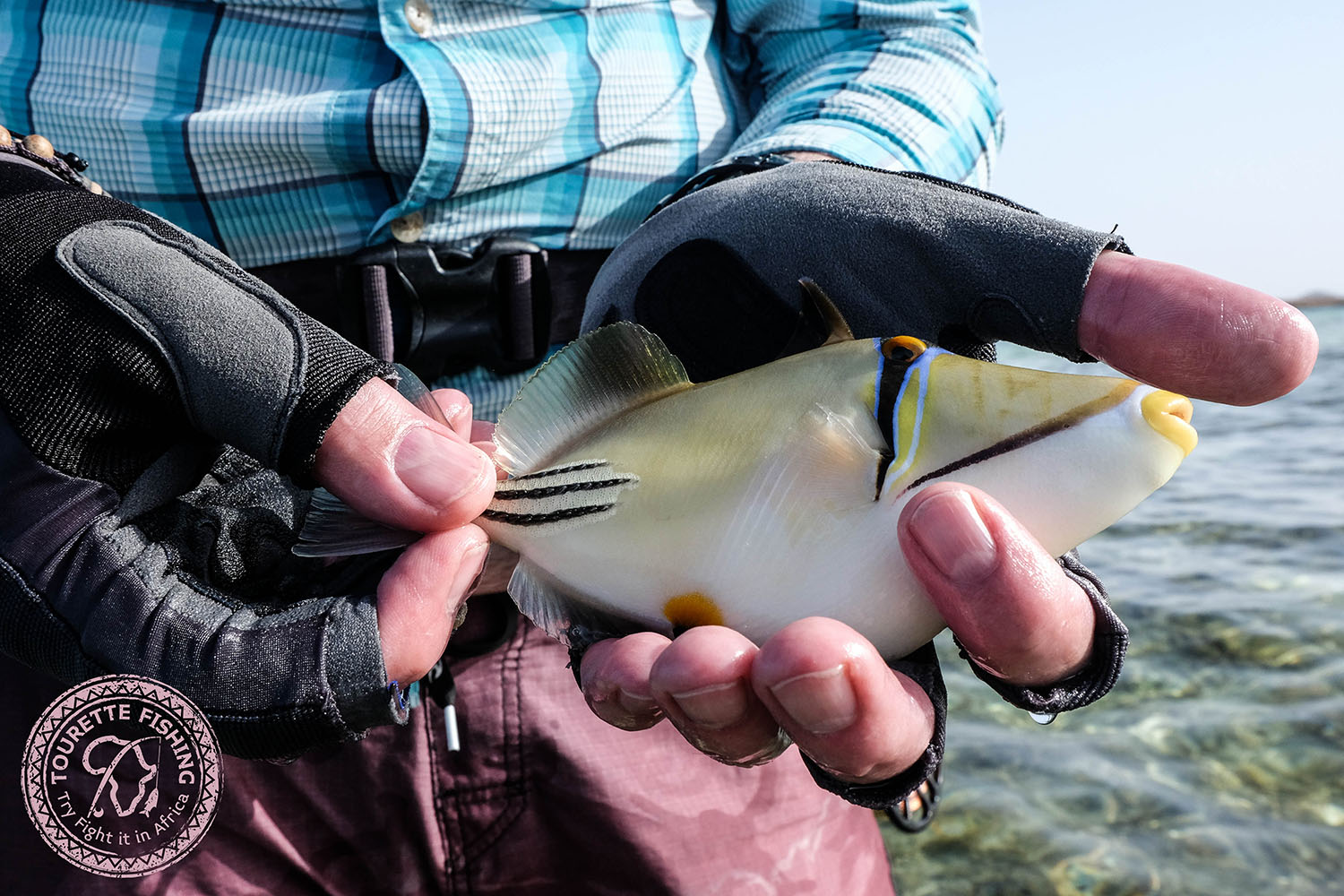 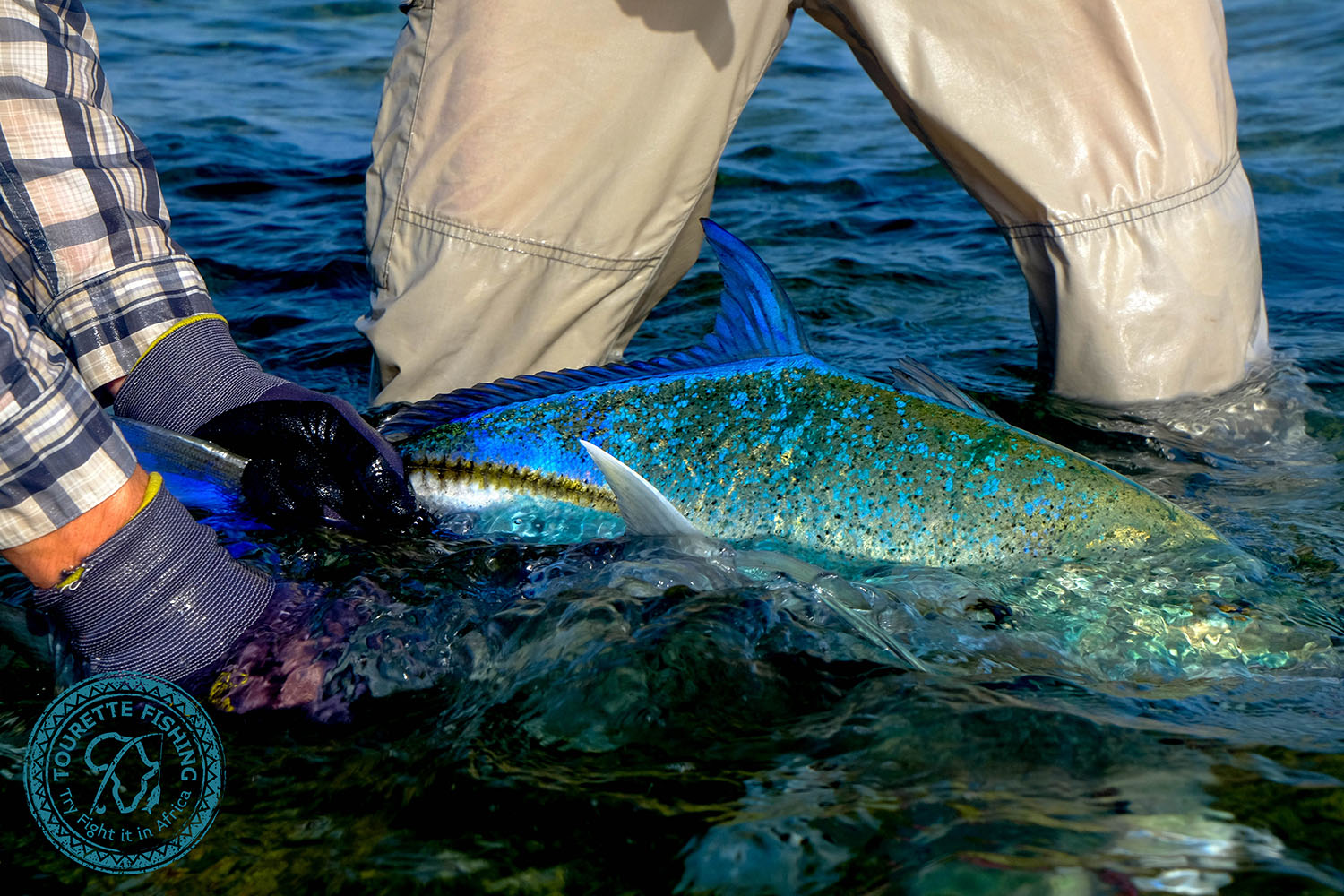 a small GT. It was a good morning with plenty of action. Nicola took the gents out for a day of popping. Gilberto went in first with a GT of about 15kg, Robbie shortly after him tucked into a GT of his own. At sunset, we popped in the mouth of the lagoon and Robbie went to war with a tank of a GT that he managed to subdue.

On day four we embarked on a crossing from the lagoon to a long coral reef. In the morning, the waded the Southern flat, but the triggers had the final say. We opted for teasing in the pass between the Northern and Southern section of the reef. Greame caught a bluefin trevally off the edge before a school of dolphins came through and spooked the entire pass. Gilberto did well though and managed a decent bohar snapper as well as a big bluefin.

For the final day, we set our sights on a large island. The conditions were good and the fishing was on fire! The triggers were out in good numbers with their tails high and dry as the browsed the bottom. As we waded the beach we had multiple shots at tailing fish. More often than not the fish would race up to the fly and eat it several times before realising that something was wrong. We had numerous close encounters, but setting the hook on these crafty guys is easier said than done. After hours of despair Robbie hooked a trigger that ran him straight under a coral bommie. Stu strapped on his goggles and fished it out by hand. It was a great guiding moment for Stu, but even greater for Robbie when he held that trigger high. A well-sighted barracuda of close to 1,5m cruised within casting range but soon showed 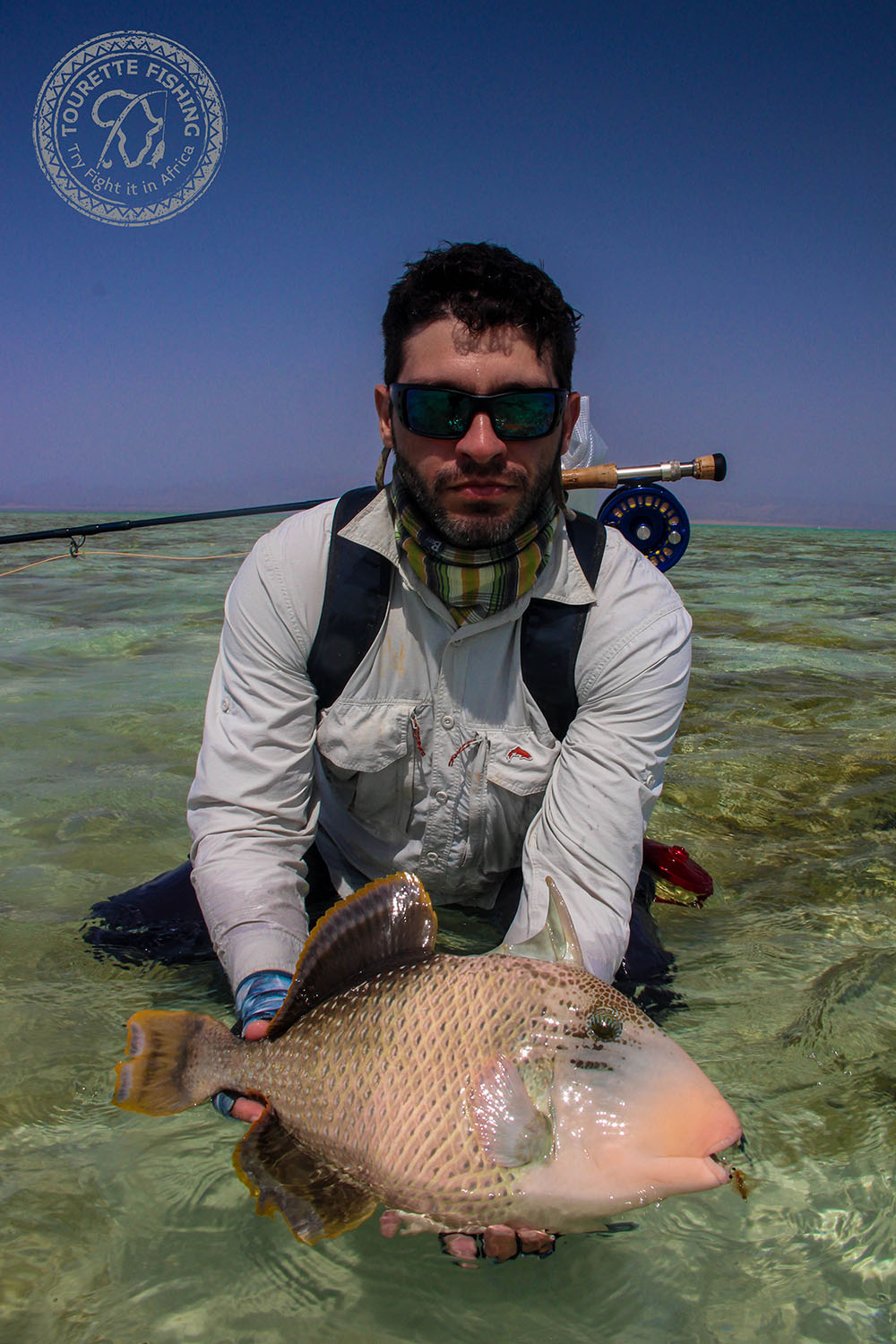 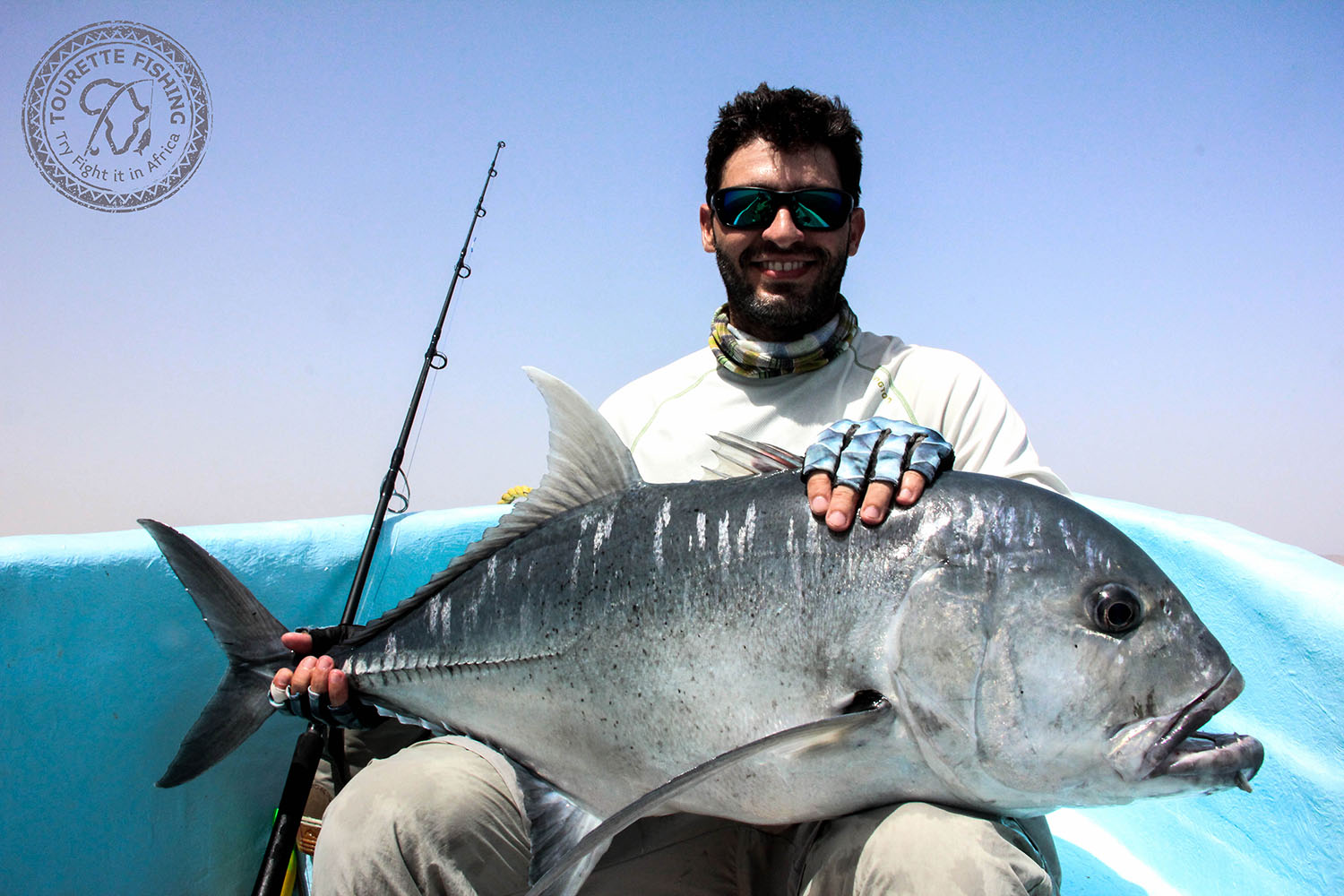 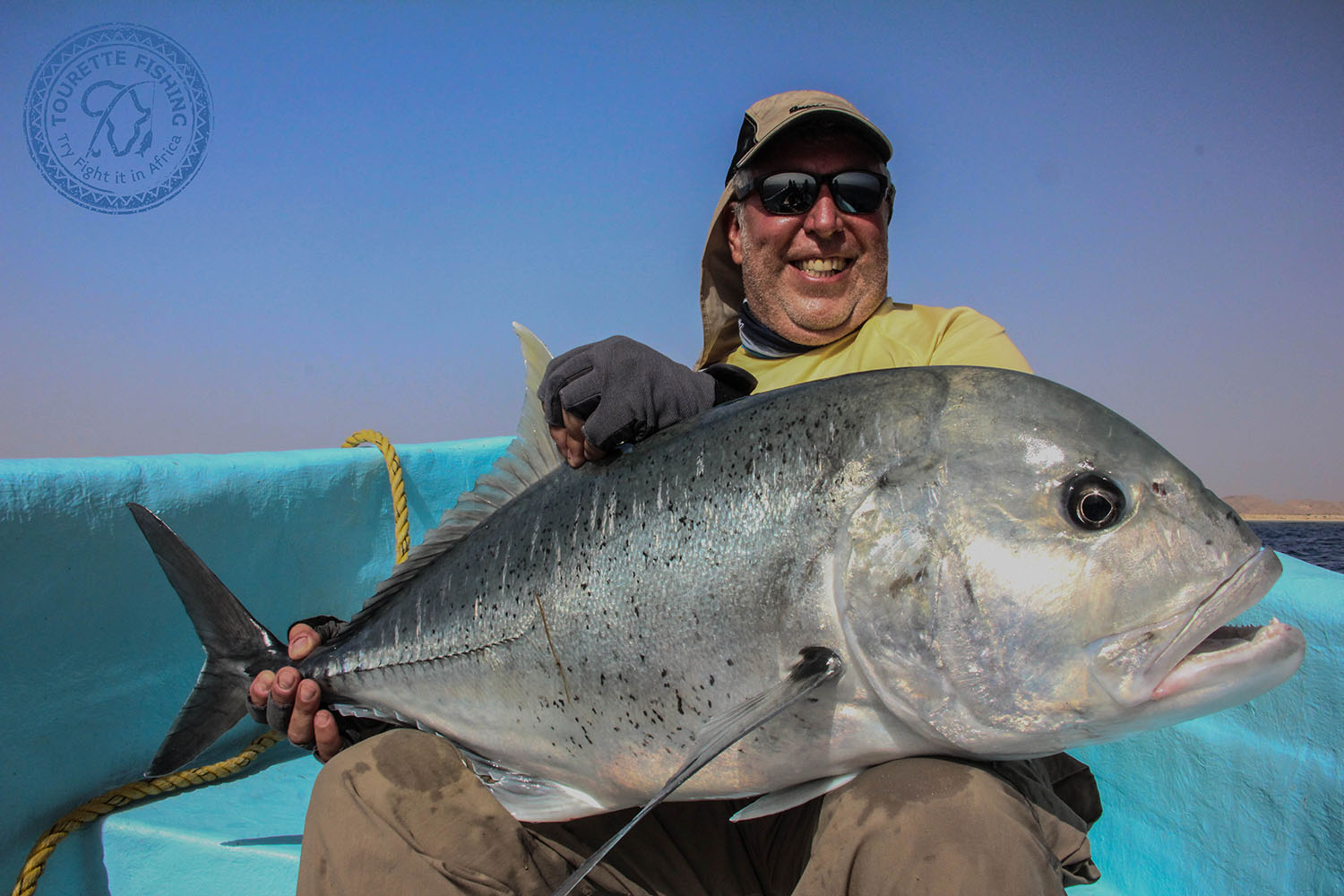 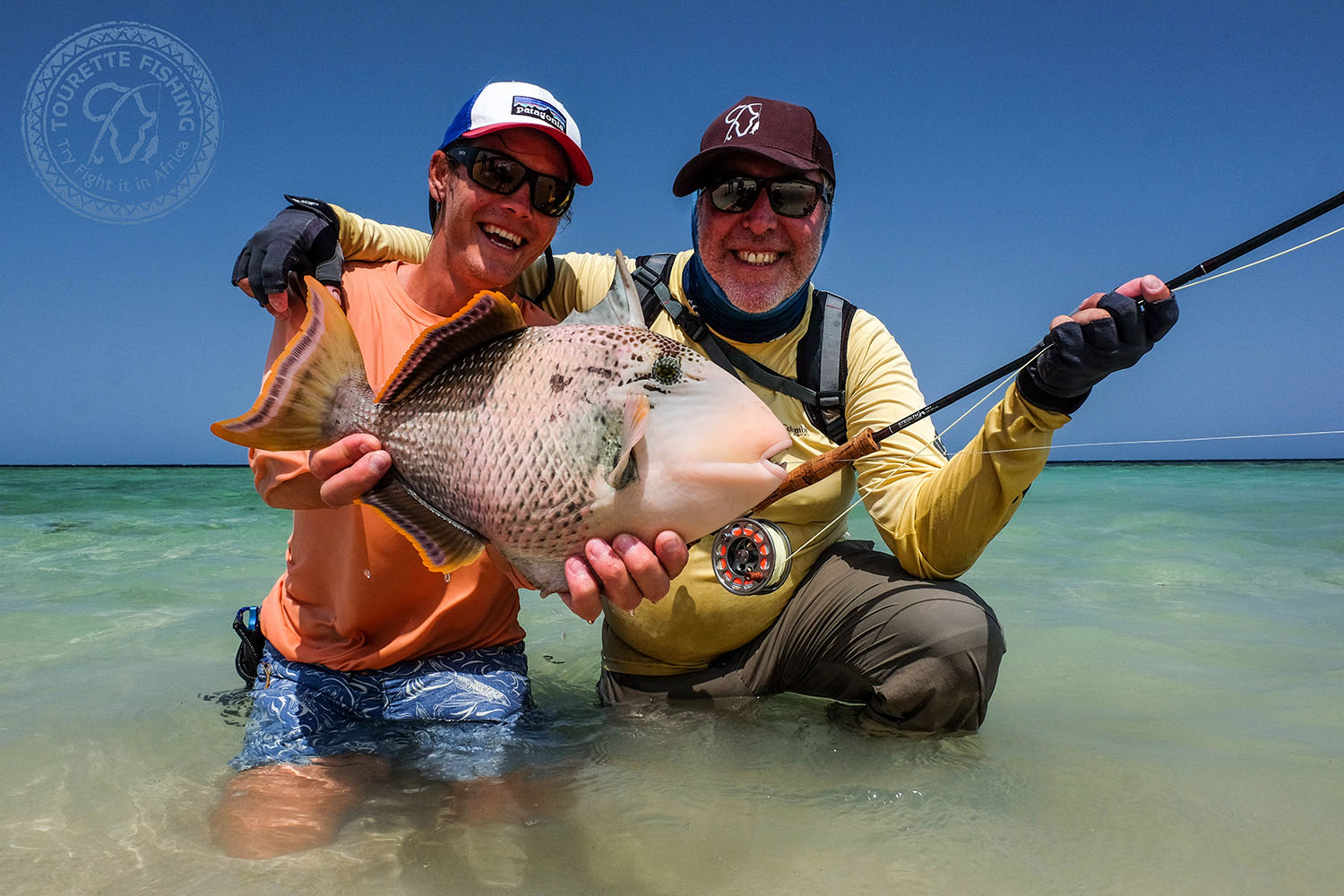 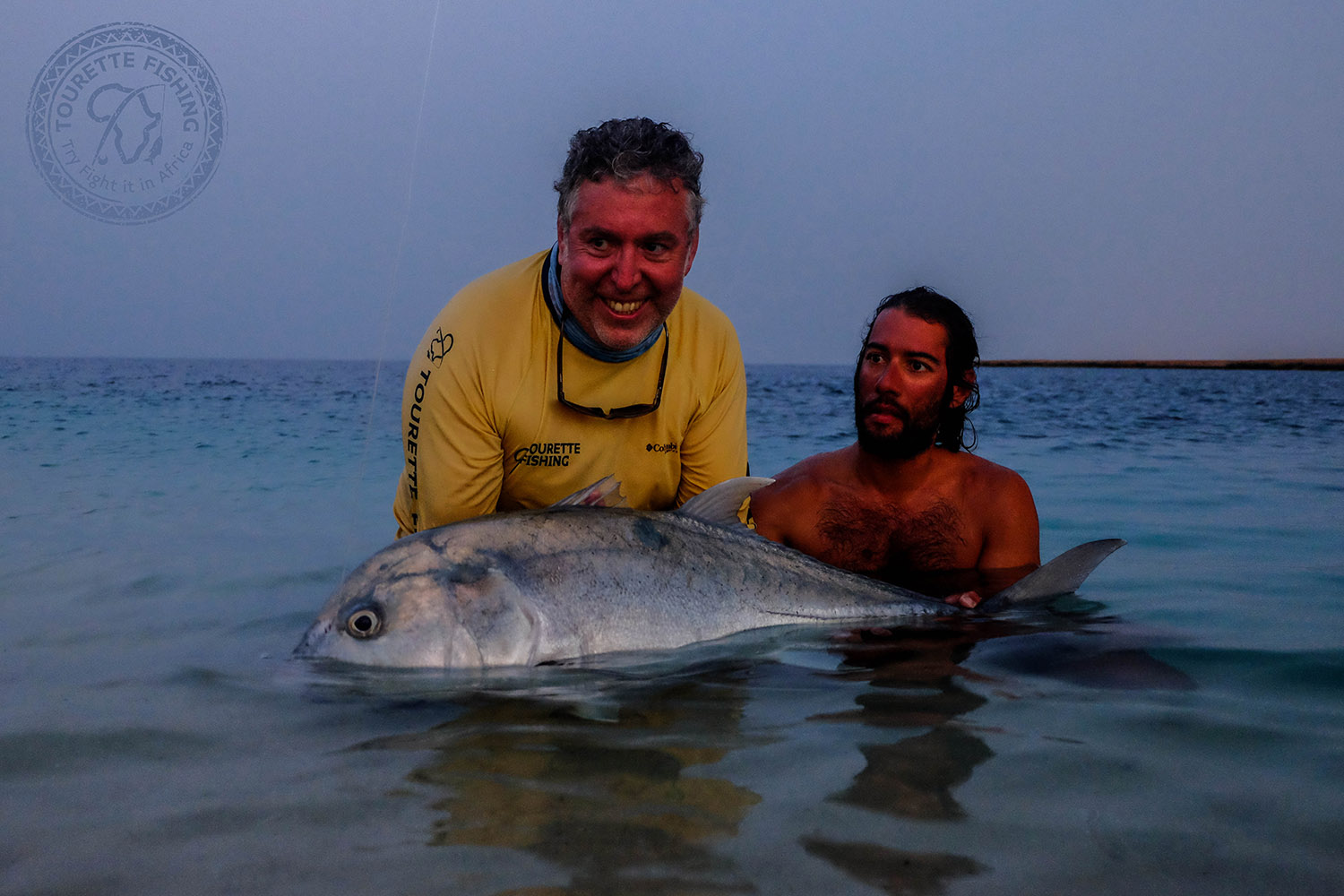 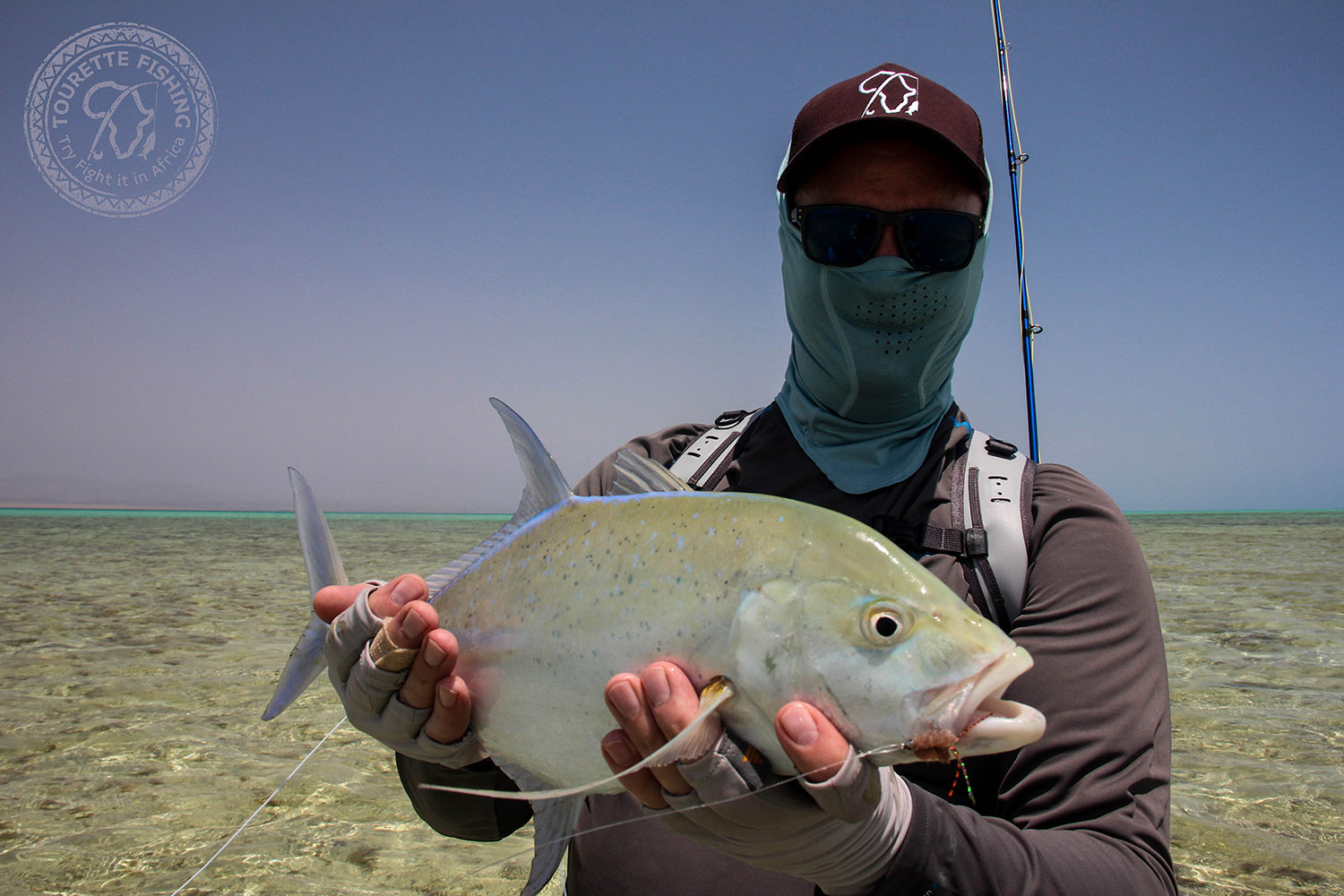 Sandro the middle finger with a wild aerial display.

It was an action-packed trip for all and although the fishing proved to be tough it was truly memorable. It would have been a splendid trip even if they hadn’t unpacked their rods;

the sheer beauty and bounty of the red sea would have proven to be enough.

Until next week, tight loops 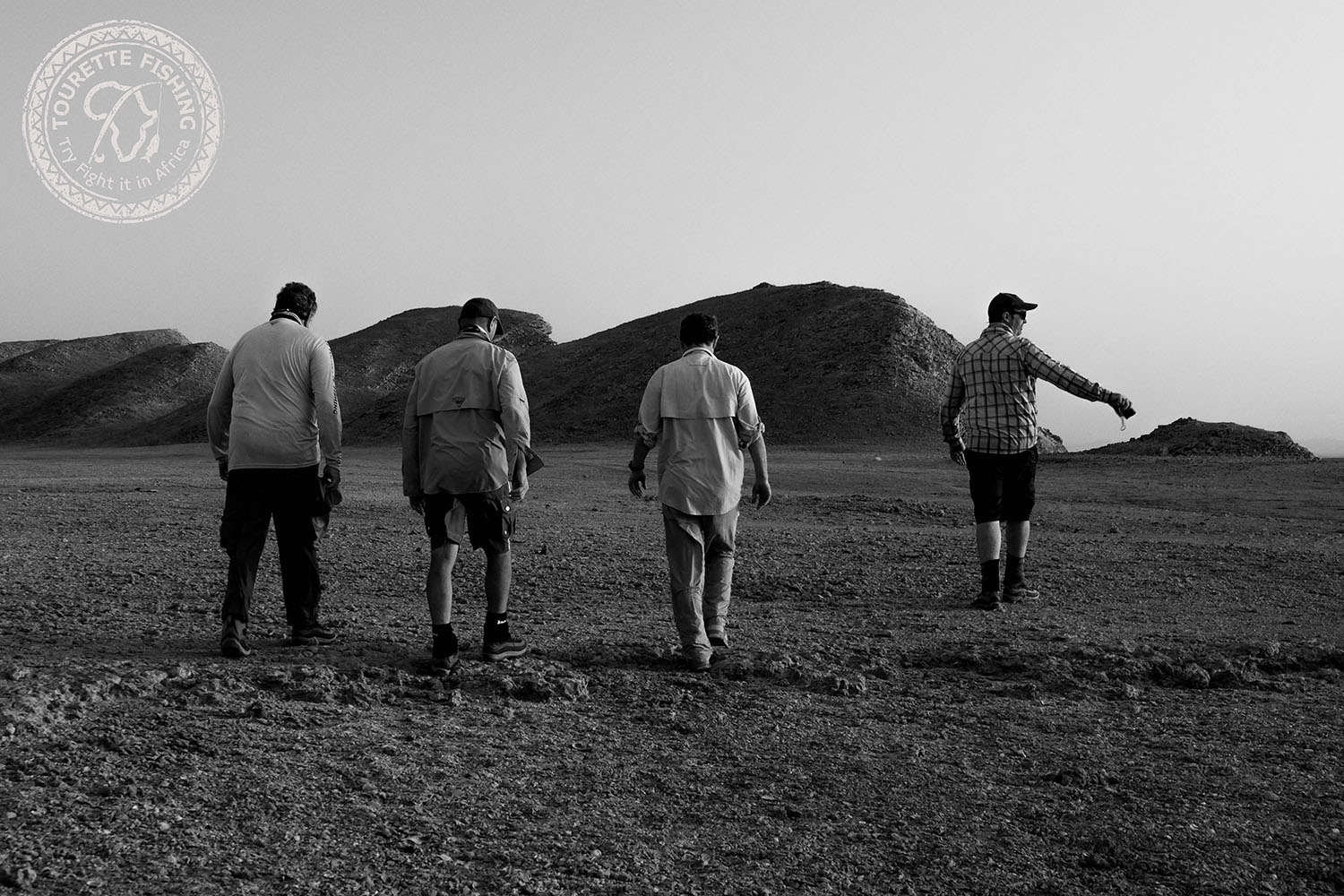