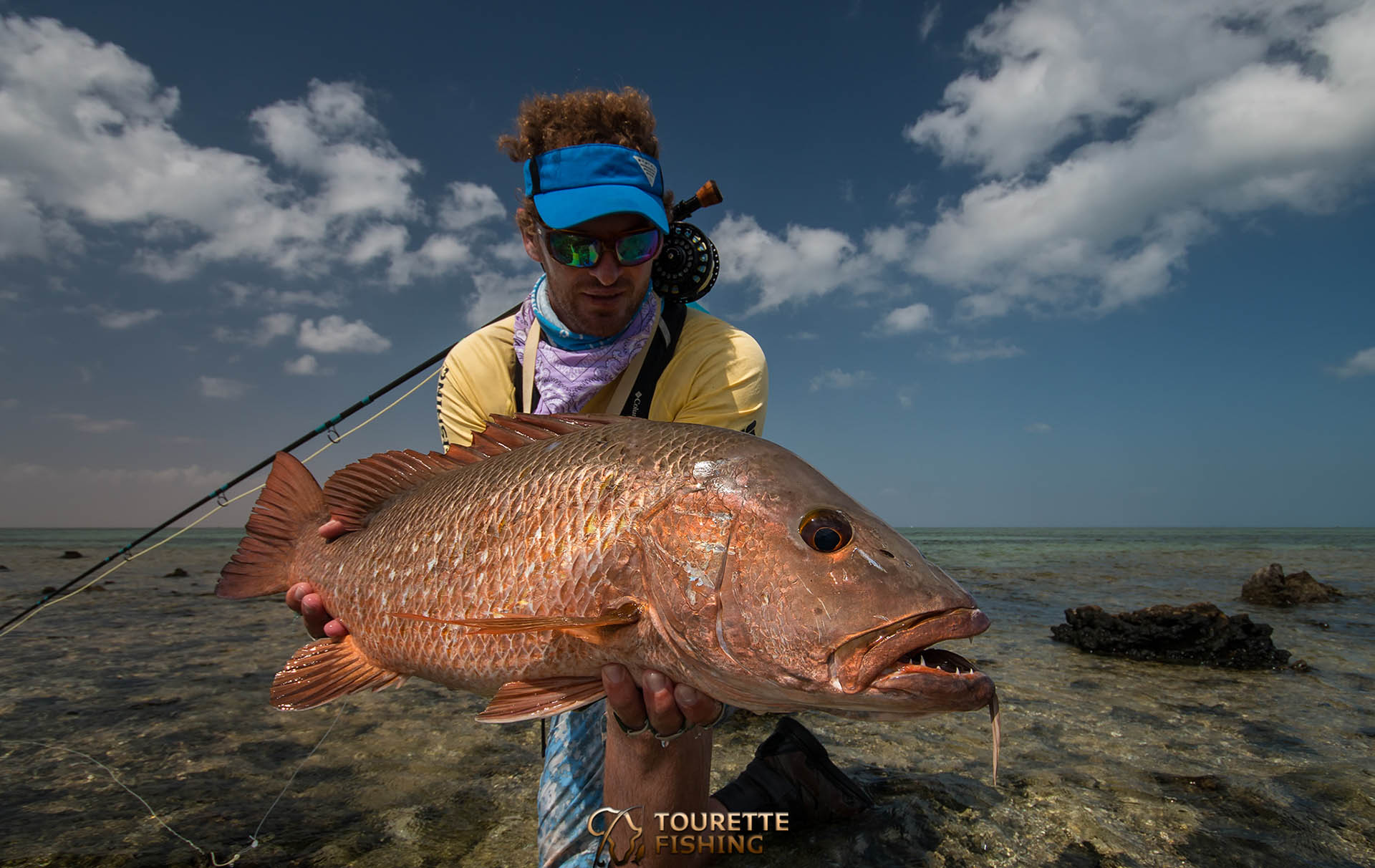 The first week had been very special – we had found areas with good numbers of bones, we had hooked and landed some exceptional milkies, GT’s, Bluefin, Bohar and had witnessed some of the finest triggerfishing anyone could comprehend. As soon as that week was winding down, we began watching the weather forecast like hawks for the next week. Unfortunately it was not pretty – a forecast of three to four days of strong wind meant that our plans to move the mothership to the earmarked area was not a viable option.

We were welcoming old friends John, Chris, Brian and Edouard onto the boat. All of whom we were extremely excited to fish with once again – making the “weather pill” even more bitter to swallow. 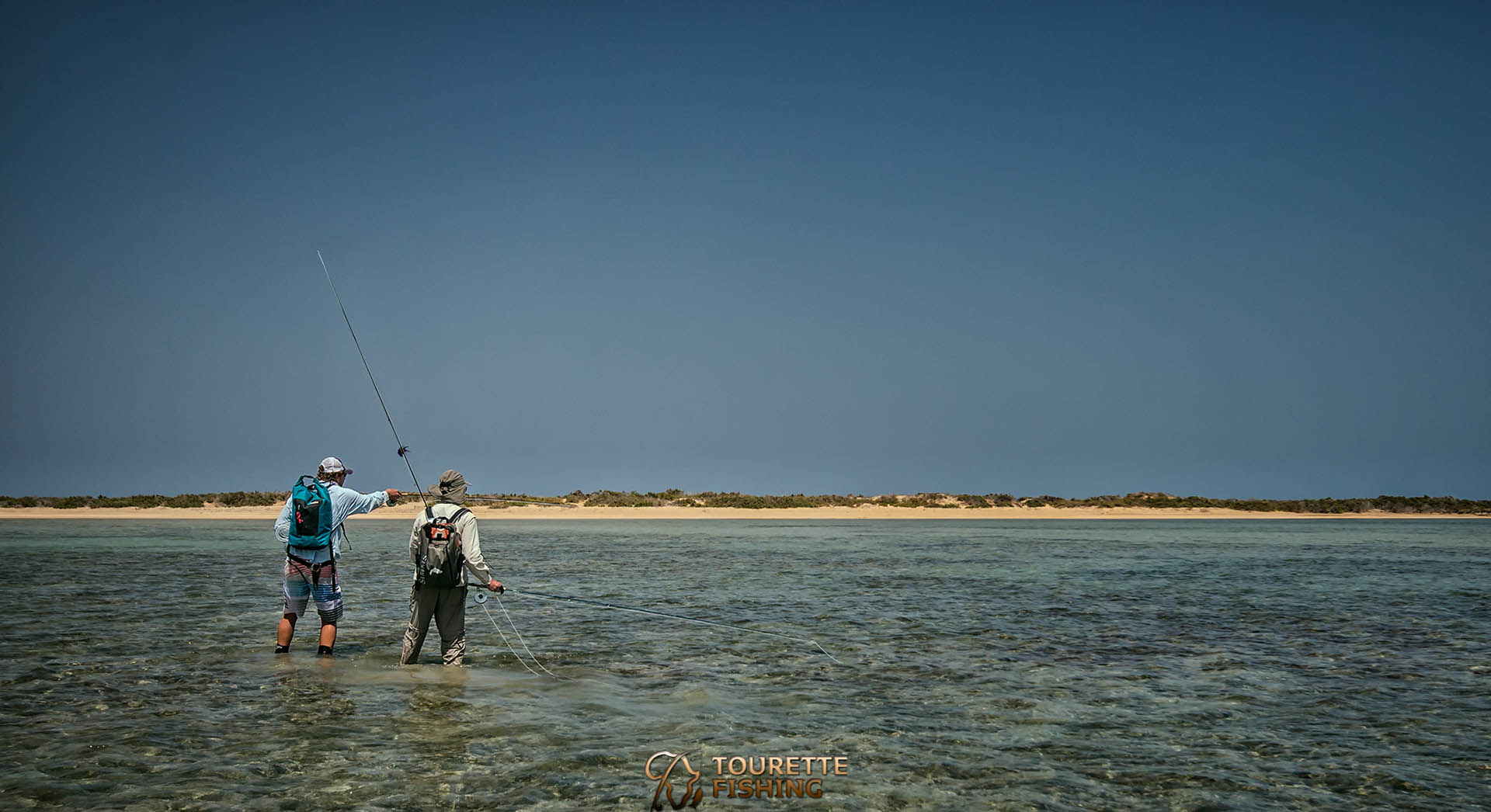 pointing out a tailing trigger on the Nubian Flats

Our alternative plan was to move the mothership to the huge flats complex we knew already. In the past we had encountered triggers, goldens, GT’s, bluefin, Bohar, Barracouta, Bumpies and Permit in this area, so although we weren’t in the area we were hoping to be for this week, there was still lots to look forward to.

Our plan was to stay in this area and fish as much as possible, and as soon as the wind dropped we would move to another area for the last 2 days.

The first four days were extremely frustrating. The wind made it very hard to fish affectively. There were very little fish on the flats, and inevitably when one was sighted; it was too late to get in a realistic shot at it.

With these conditions it forced us to concentrate on fishing the flat edges for these first three days, with a lot of this being where we would tease in fish. Even this fishing, which is normally red hot, was tough. We managed some really good fish, including some great bluefin, bohar and mangrove snapper, along with a handful of smaller GT’s. Chris managed to hook 3 really big GT’s, all of which were lost to snapped leaders or fly lines. 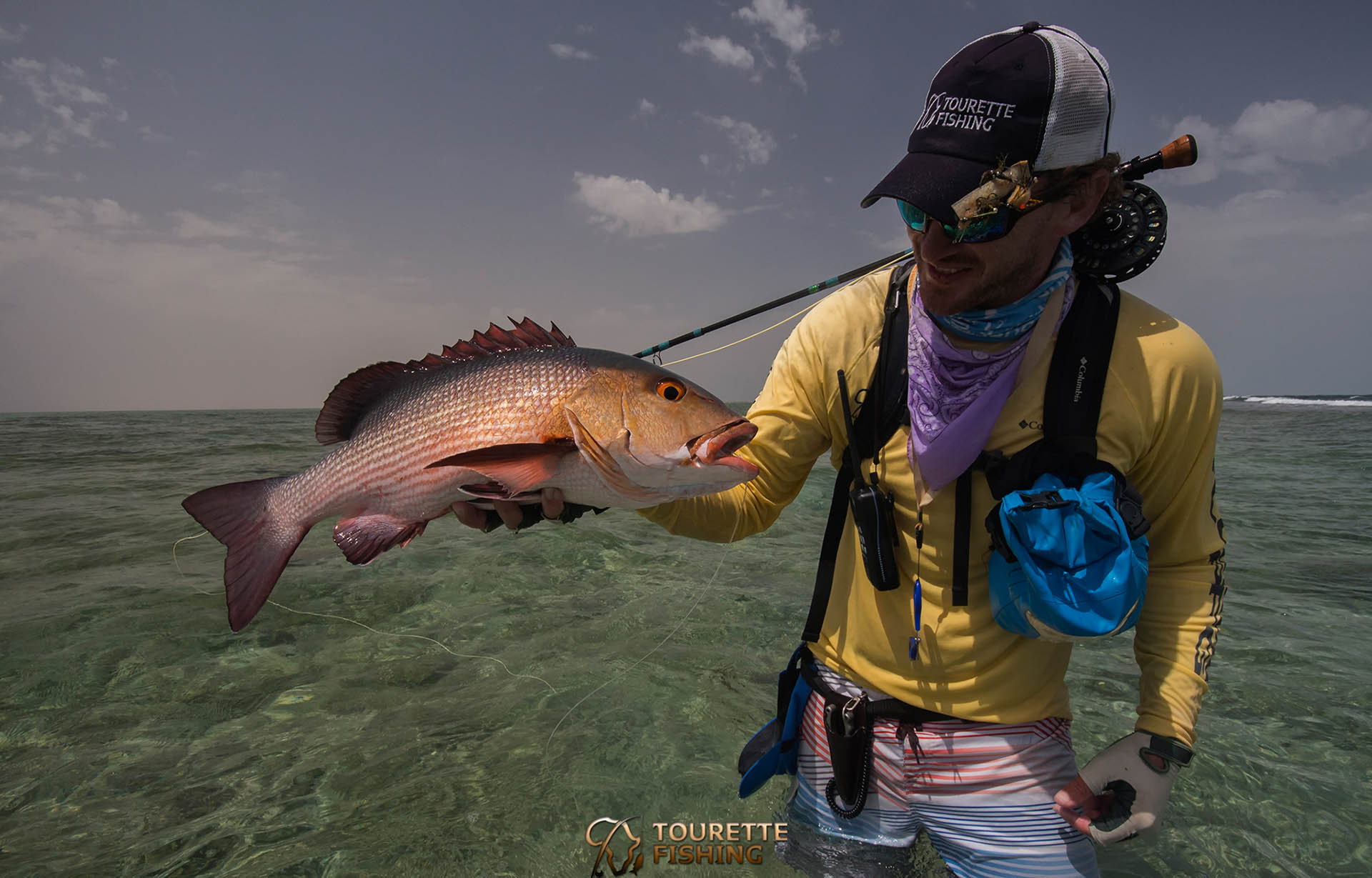 Another good bohar taken on the Nubian Flats

Some other fish of interest was a big barracuda that Edouard hooked. This fish was around the 20 kilo mark, and although the hookup was solid, a line wrapped around the reel seat and a rapidly moving 20 kilo fish can only end in heart break.

When the wind finally died, we moved back to the flats we had fished the week before, and this is where things began to change for our last few sessions:

On the first session it wasn’t long before Brian saw some fish moving and after stalking these fish for upwards of 20 minutes finally got into a position to make a couple good presentations. On the 2nd cast he went tight, the fish made two strong runs before the hook finally pulled – The fish in question was the elusive permit!! This particular fish was around the 8 to 10lb mark.

The following morning we went back to the same area to try and find more opportunities at the tailing permit. 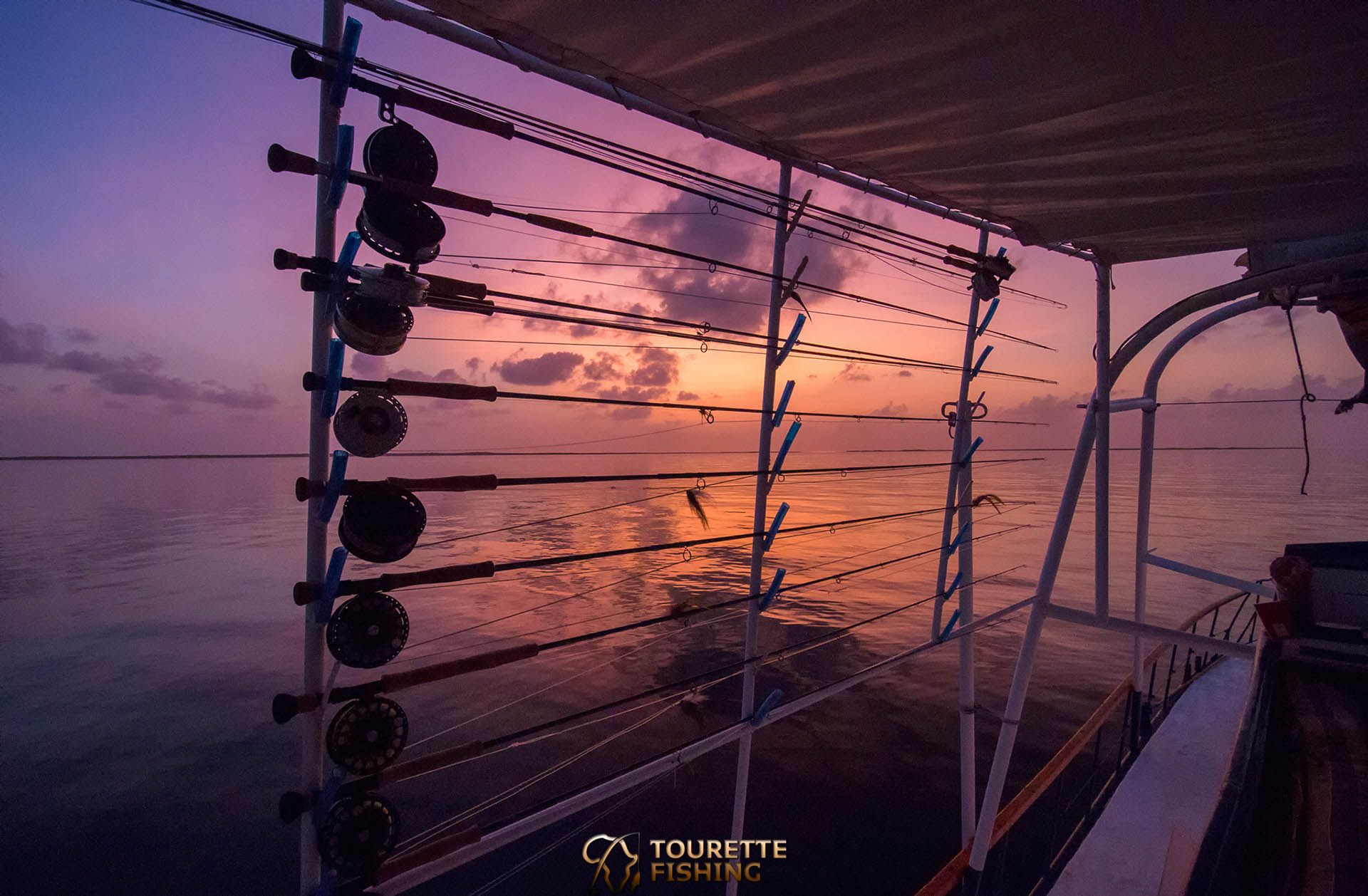 Sunset over a settled Nubian Island

We found numerous permit cruising the shallow water, with their distinctive dorsal and tail fins giving away their position. Many of these permit were unfortunately with shoals of tailing unicorn fish, making it an exceptionally frustrating task to present the fly well to the permit and not spook the unicorns. The permit could only be with the unicorns for that exact safety reason, like its own built in security alarm, or the unicorns were flushing out some prey species for the Permit. Whatever the reason, the unicorns were making us pull our hair out.

Chris Binnington managed to get a Permit to eat within one of these shoals, making it such a special fish – firstly any permit is an achievement, and this one was the first landed on the Nubian Flats, secondly the presence of the unicorn fish made it that much more technical. 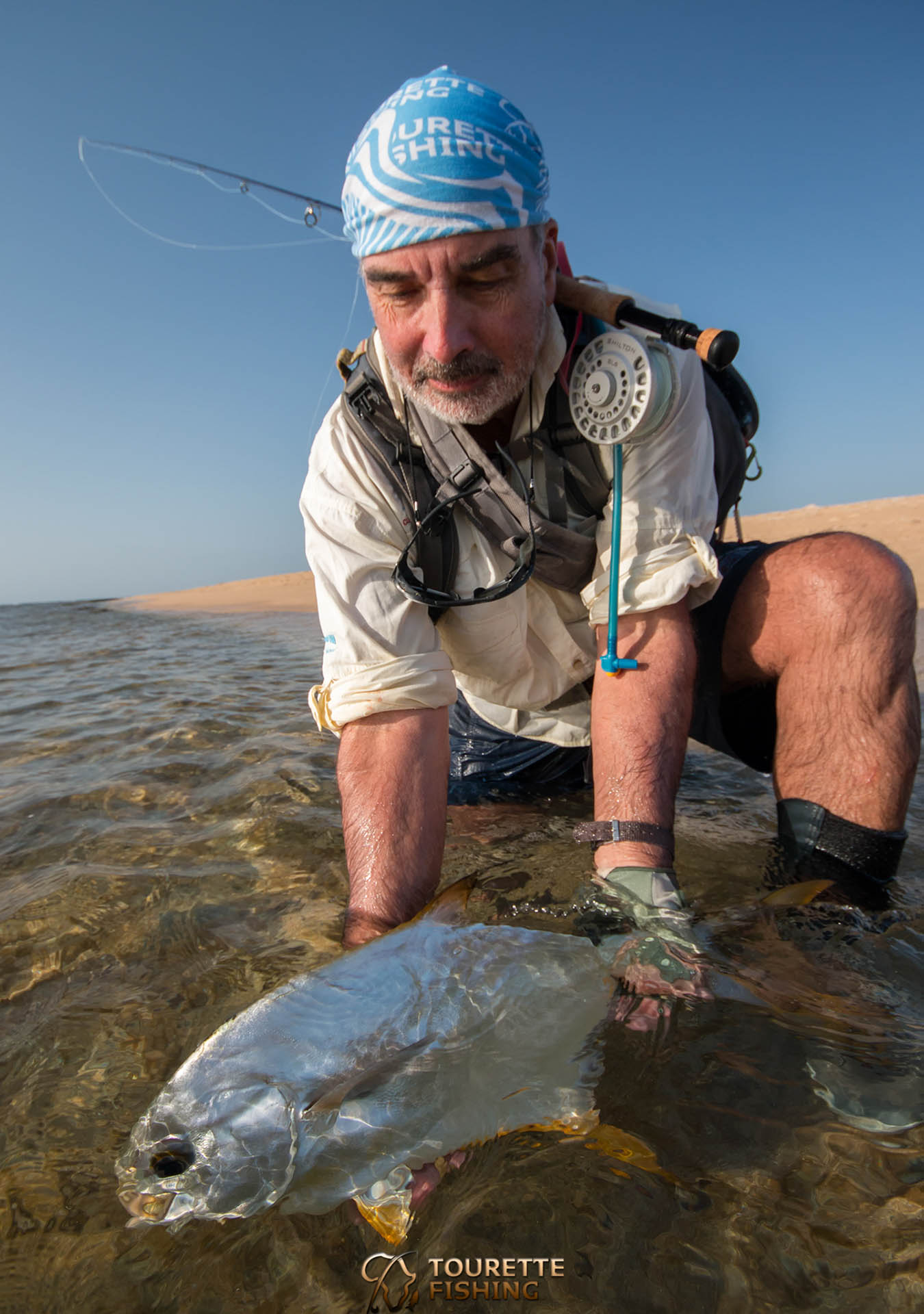 Shortly after this Fede cast at a single cruising permit that didn’t hesitate to eat the fly. This fish was on for roughly a minute before it ran into a cut and snapped the leader. Fede reported that it was a bigger fish around the 15lb mark.

Another interesting development on this flat is that we were seeing a snapper type species tailing on the flats. A fish all of us had absolutely zero idea as to what it was. This is a big statement, especially when you have someone like Ed Truter on the boat who is the human equivalent of a Wikipedia on fish. In a session we would see 6 to 8 of these tailing mystery fish, all in the 8 to 12 kilo range. They proved extremely spooky and we only managed to present crab patterns to them properly a couple of times, as this is the only thing we can fathom that they are eating – in the end we didn’t hook any, but we are certainly extremely intrigued. This ‘mystery fish’ as it has been dubbed on the boat is certainly going to become an obsession of the team until the day we land one. It is definitely going to happen, it is merely a matter of when. 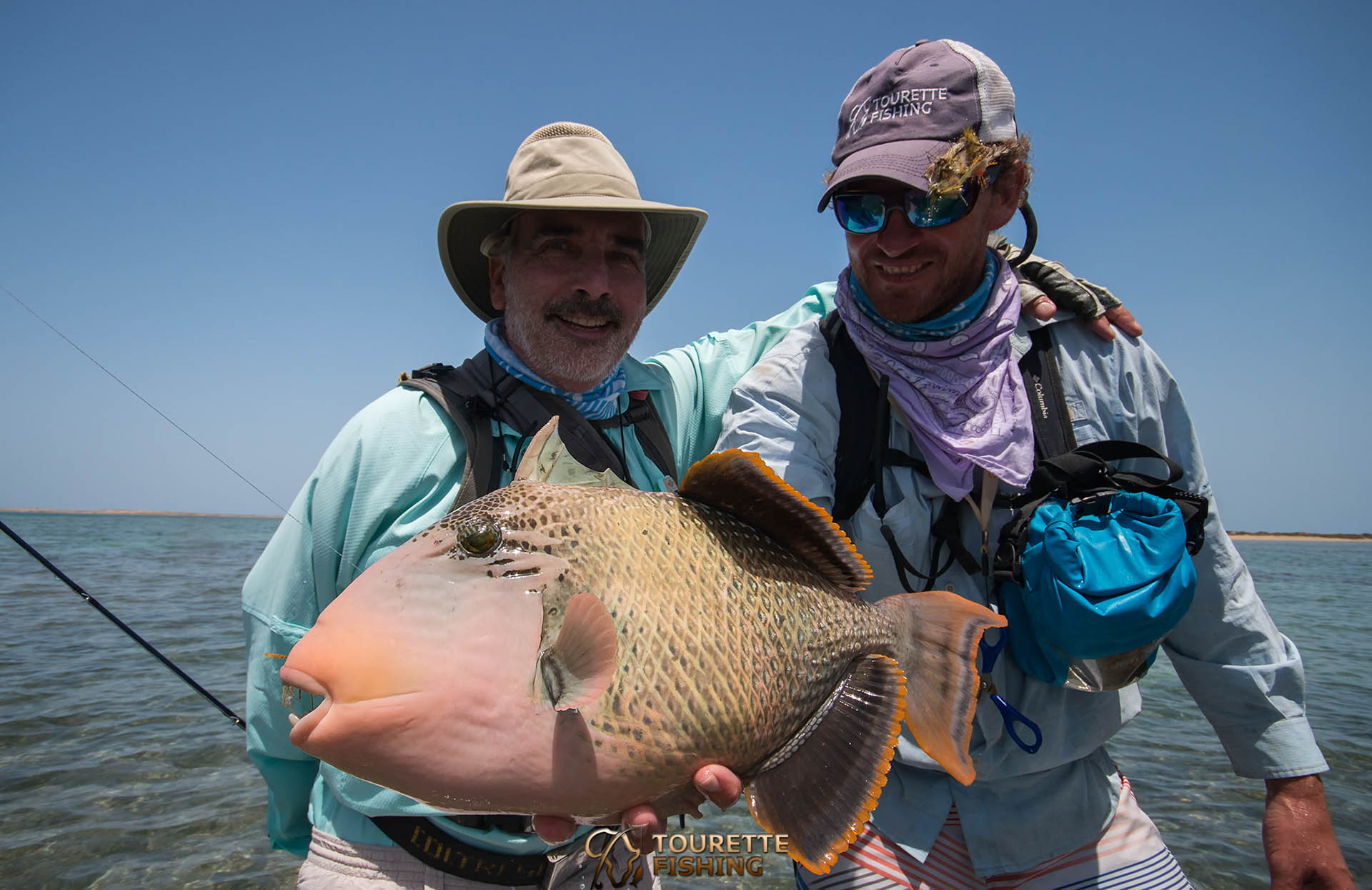 With a permit under the belt we moved the mothership again to another flat. Here we found some good tailing triggers, something that the team had been looking forward to. Although there were plenty of shots it was only Chris and Ed that converted shots into actually fish.

We saw a number of single and double bones on one particular flat, and Ed hooked and lost a bone that he judged to be very close to the 10lb mark. A couple of good bluefins ended a great day.

The following day we had limited time and decided on a two pronged approach. Chris and Brian fished a flat we had dubbed the Turtle flat, and John and Edouard fished from the boat around south passage in the hope of boating the numerous big GT’s in that area. Off the boat Edouard managed to land a small GT and John had a eat from a bigger specimen, which unfortunately continued to swim towards him making it very hard to set the hook.

Brian and Chris did well on this last session with Chris getting a respectable GT and a good sized bluefin and Brian hooking a big shark on the flats. Brian also fished to a bone fish that was around the 12lb mark, and although the fish showed interest it spooked on the second cast. With our mounting experience in this area it is only a matter of time before this translates into landing one of these really big bones.

That’s it for this week – one that was frustrating with the weather, but great company made the week memorable along with some great fish in the end.