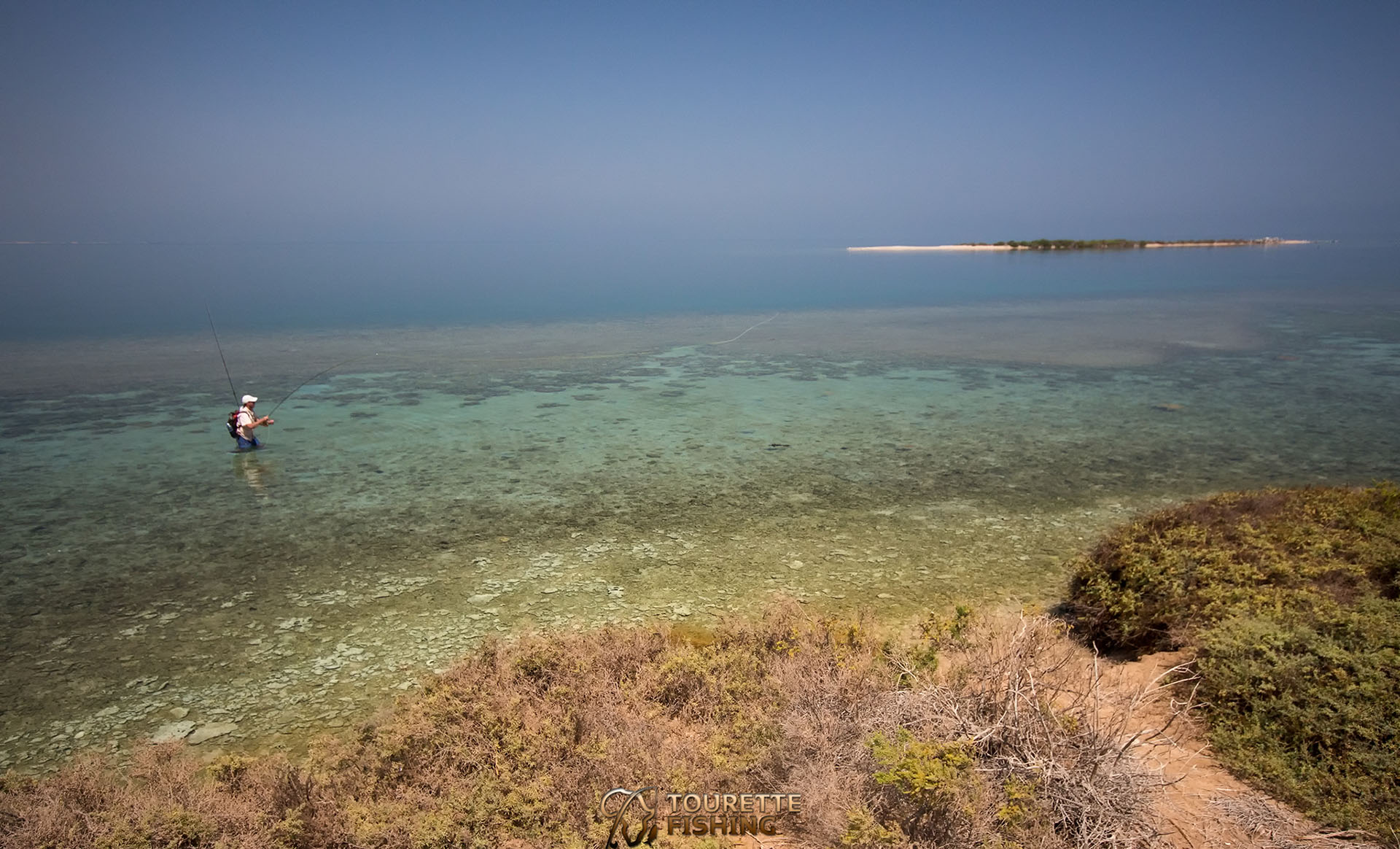 We are more than confident that the Nubian Flats is the real deal, but in order to be in a position where we will be able to offer fully guided trips, we need to put in the ground work to ensure we understand the fishery properly before the 2015 season, and so I find myself here, on board our mothership writing the blog report from the first few days of our first, of seven, trips – all of which are totally dedicated to the exploratory process.

During this week we are joined by old friends Eric and Chris from South Africa, Jeff from America and Nikolay and Alexey from Russia. A really great bunch of characters to share this amazing experience. 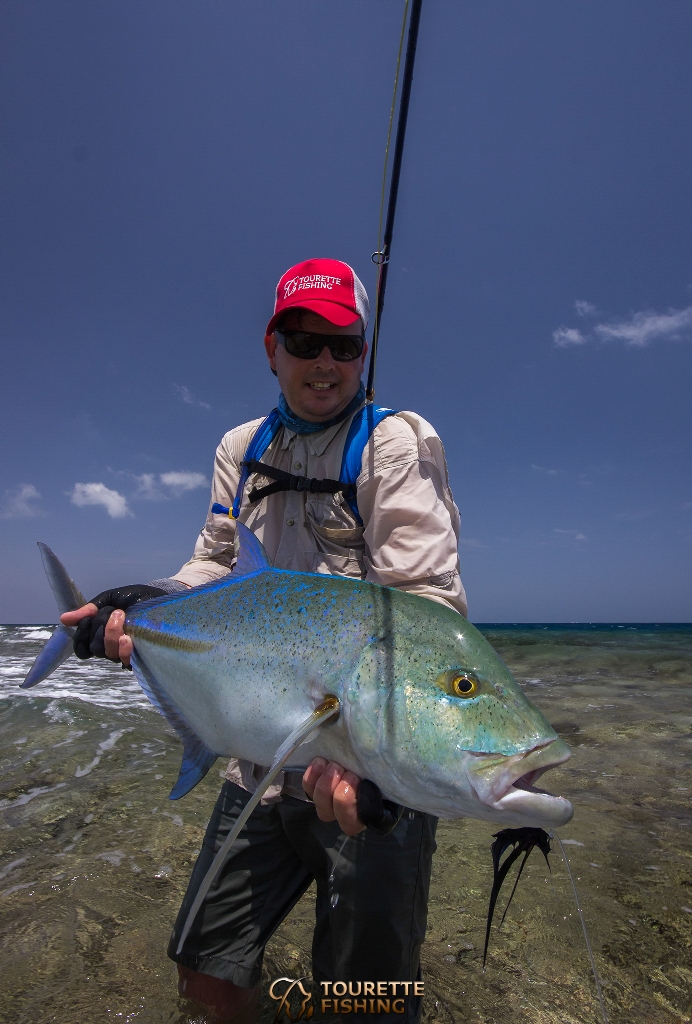 Our last trip was in November 2013, where we spent 2 weeks exploring a vast flats complex in the south of the coast. We returned to this same area to start off this first week of exploring, and already we can see the value of experience. With this prior experience we were able to concentrate our limited time in areas that we were confident of finding fish.

This is what the first few days had in stall for us:

Straight off the bat on the first day Mark Murray found numerous shoals of tailing golden trevally, triggers, and although there were many fish they proved extremely spooky. Added to this, they were positioned in such a way making it hard to get into a realistic casting position.

On this first day there were a few huge napoleons that flies were presented to, none of which managed to get to the fly before one of the numerous blue fins did! Very frustrating indeed. 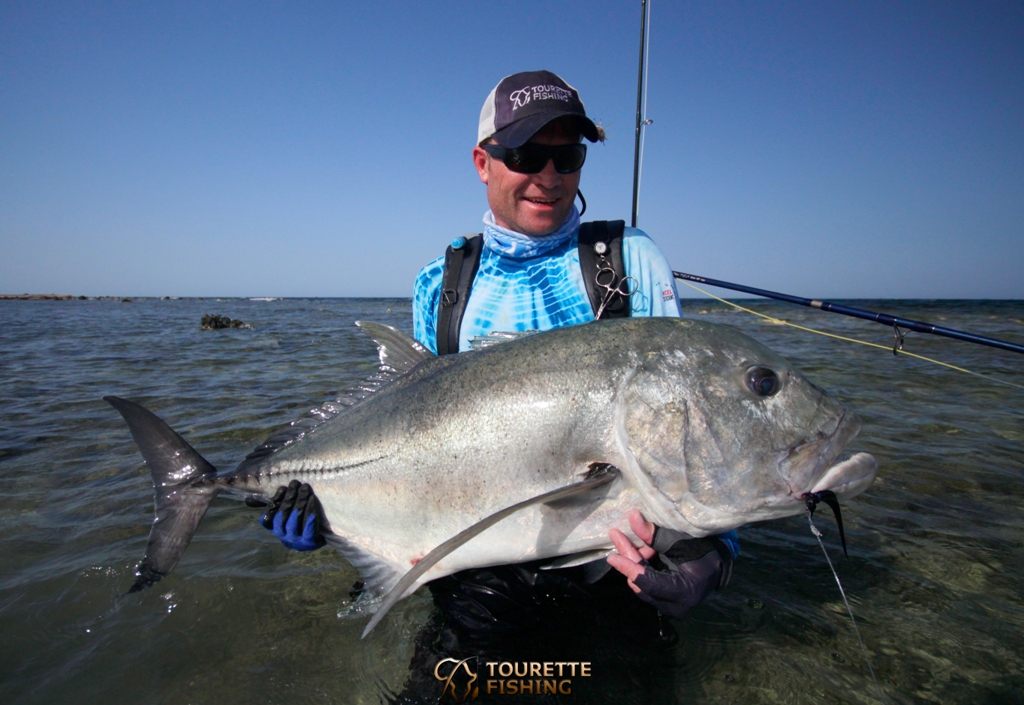 Chris with a great 115cm GT

On the GT front, there didn’t seem to be as many as our previous trip, although there were certainly still opportunities. Chris Rooseboom managed a magnificent GT of 115cm, and there were a few smaller GT’s on the flats and the flat edges. The GT’s bluefin cousins were in good attendance with many great specimens caught.

Interestingly, after the vast numbers of Bohar that we landed in this area in November, we were expecting to see the prevalence of this species once again. The number of bohars wasn’t as high as our November trip, but what this species lacked in numbers it certainly made up for in quality. Almost every single bohar we landed in this first few days was a really great fish, with many of these bohar reaching the 7 to 8 kilo mark. 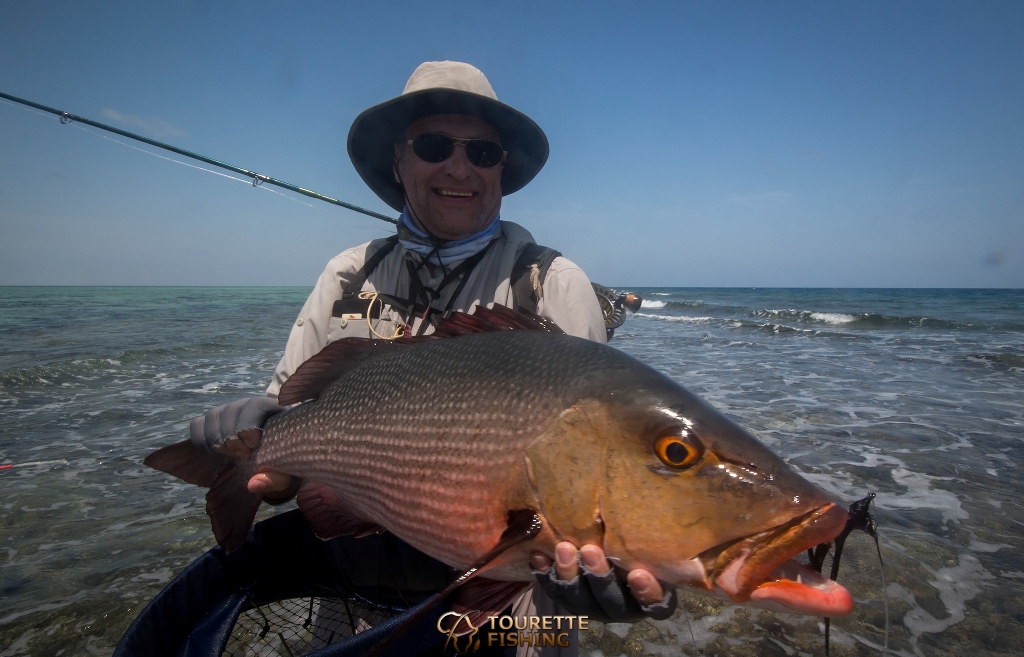 Alexey with one of many good bohar off the flats

So far it has been an amazing start to the week. Every single person has a few great fish under their belt. Tomorrow we set sail into some unchartered waters for 2 flats we have been itching to get to. Hopefully our next blog report, for the second half of this week tells some tales of some amazing fishing…… 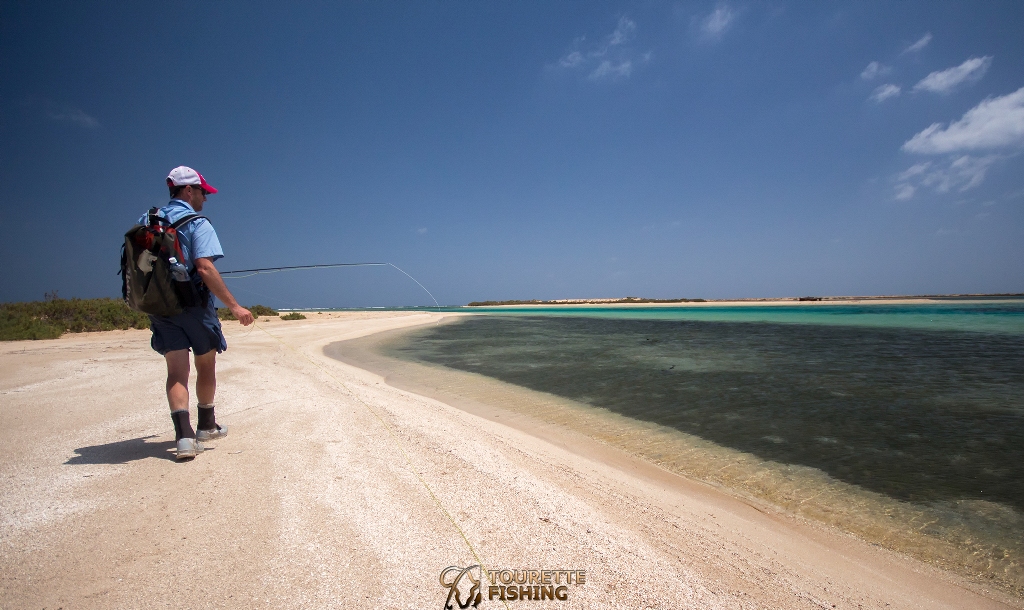 Being the first angler to walk a flat is truly special!

It’s been 4 days since my last blog update, over which time we have been exploring an amazing set of islands and Flats off the Sudan coast. At the moment, the guests are busy breaking down their rods, and reluctantly packing away their gear in anticipation of the journey home tomorrow.

Our legs, bodies and arms are tired. Every bit of energy we have put into exploring, and this often meant whole days walking to ensure we saw as much of this area as possible.

On the first day after we arrived at the new unexplored island, we split into 3 groups to ensure we got to cover as much ground as possible. 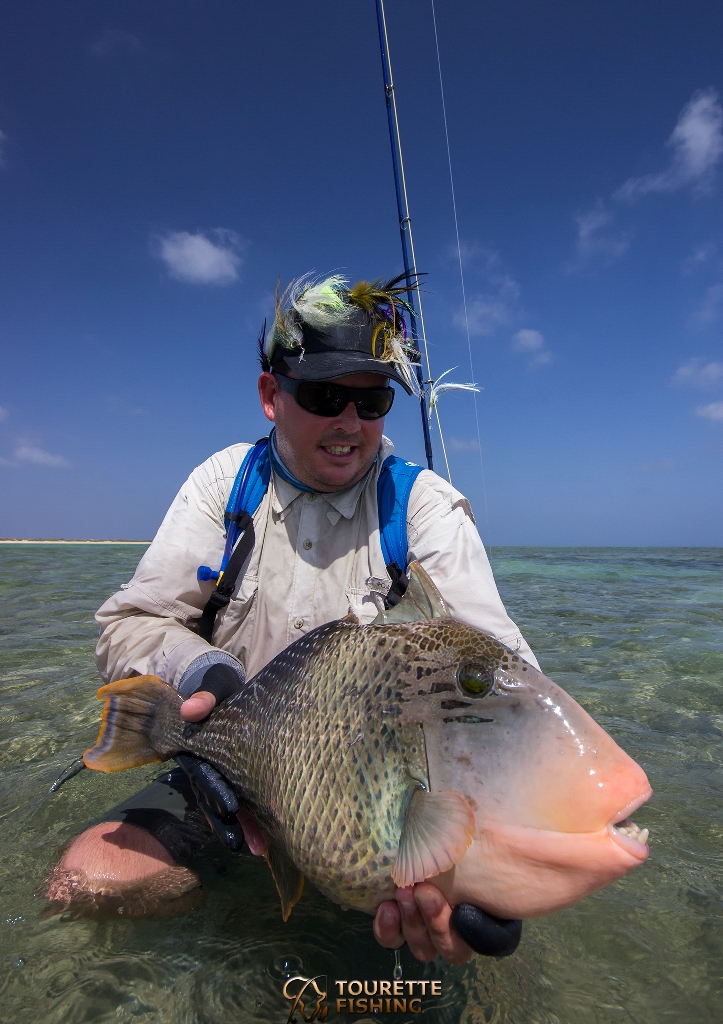 Ed and I took Jeff Currier, Alexey and Nikolay to an interesting channel and sand flat that separated two separate islands. We hadn’t even reached the drop off point on the tender when Mark called on the radio to say that they were looking at bonefish where they had got off their tender on the south point of the island. Although they were getting some shots at these fish, none were taking any notice of the fly, so they were quickly written off as being something that merely looked like bonefish. They quickly managed to forget about these mystery fish, as within meters they we met by literally hundreds of tailing triggers. Mark reported that as soon as you had finished targeting one trigger, there was another a couple meters past it. Eric and Chris even got to the point where they were walking past tailing triggers in an attempt to get to the bigger sighted fish. Within a short time Mark, Fede, Chris and Eric had all landed triggers!

On our side of the island, while we were listening to the amazing reports coming over the radio, we were also experiencing some amazing fishing.

Edward, Alexey and Nikolay had gone to the edge of the flat to tease and were being rewarded with bluefin, bohar, coral trout and GT’s. 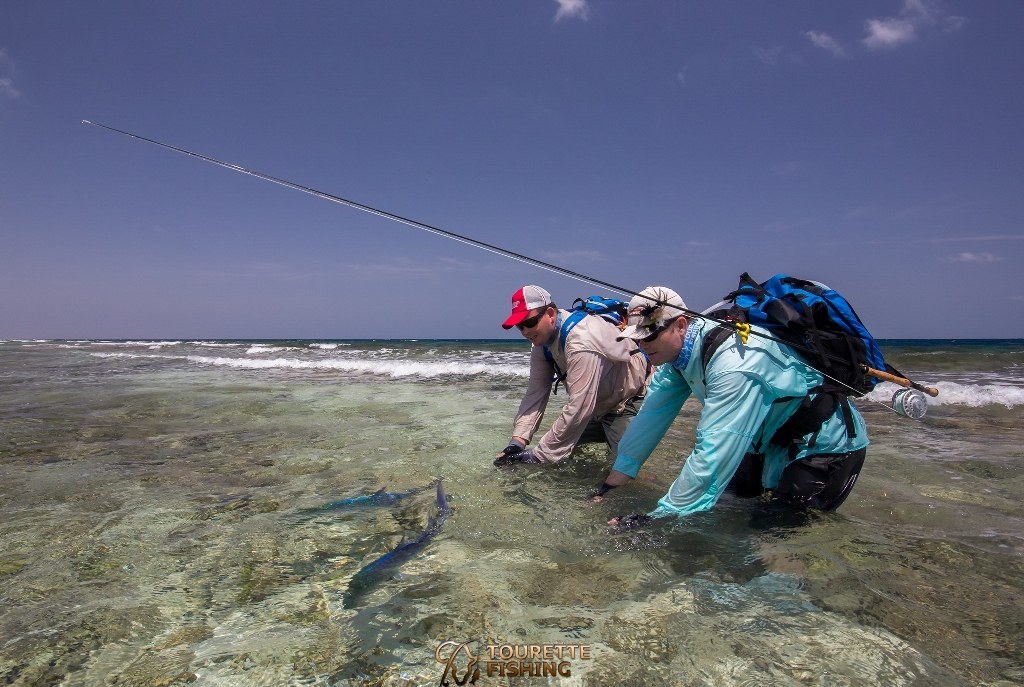 Jeff and I were side tracked by the amazing discovery of a Dugong on the flat. I had initially seen the dugong and thinking it was a massive ray, had called Jeff over in case there was a GT cruising with the ray. When the “ray” was merely meters from me it rose to the surface and literally put its head out the water to look it at me. I have had some experience with Dugongs before, and couldn’t believe my eyes. There are estimated to be only a few hundred of these amazing animals left along the entire East coast of Africa, so to discover one so unexpectedly was a humbling and privileged experience.

Back to the fishing: After leaving the Dugong Jeff and I found a handful of tailing triggers, and although not nearly the numbers that Mark’s group were experiencing, they were still plenty to keep us vibrating with excitement. 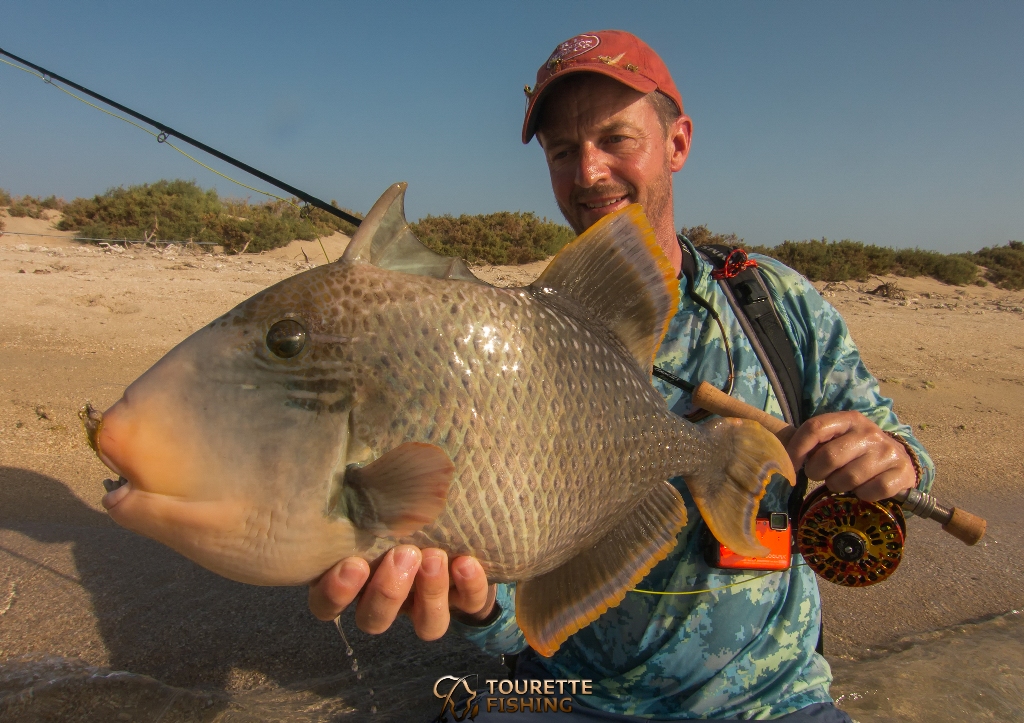 Although we couldn’t convert any of the Triggers, as we left the triggers we walked straight into a group of tailing bumpies. Jeff managed to have 3 or 4 decent casts at them before the fly snagged the bottom and the bumpies spooked. Although it would have been great to connect with one, it was exciting never the less.

The rest of this first afternoon we spent walking northwards casting at numerous tailing triggers. As we got to an area where the flat narrowed, the triggers started showing up in their droves. Jeff managed to hook 2 really big yellow margined triggers. Lady luck however wasn’t on our side. One quickly came unbuttoned and the next managed to run long enough to get over the flat edge and into some bommies. From what we had experienced so far we were far from worried – tomorrow was sure to be jam packed with enough shots at triggers for everyone.

Going back to the mothership, everyone was abuzz with excitement about what we had found. 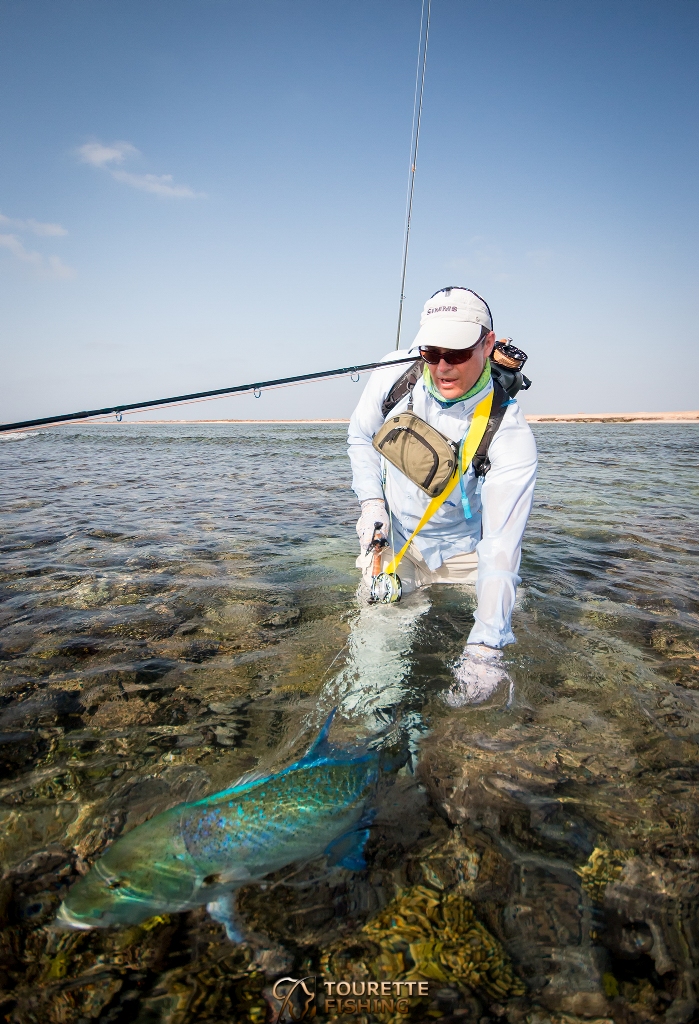 The second full day on this new island we again split into two groups for the morning session. Ed and Jeff went to explore the northern tip of the north island, with its big sand and rock flats. Eric, Chris and I walked south from the northern island, and Mark, Fede, Alexey and Nikolay walked north from the southern island towards an area that looked as if the island flats gave away to a very deep water channel that came right up to the shore. The morning was a mixed bag for everyone. There were numerous shots at tailing yellow margined triggers, and although a few were hooked, none were landed. Interestingly, it seemed that there was a complete absence of titans today.

All three groups did some teasing on the reef edge with some good results. Plenty bluefin and bohar came in, along with some good GT’s. Eric hooked an exceptionally big black GT in the 30 to 40 kilo range. Unfortunately a knot in his line ended the fight as fast as it started.

The afternoon saw some very interesting developments. Eric, Chris and I went to explore the wild northern edge of the main island, where there are no flats, but the coastline is dominated by a small cliff that goes straight into the ocean. We fished to a few sighted Napoleons, and managed to tease in and hook some big GT’s and some really exceptional Bohars. 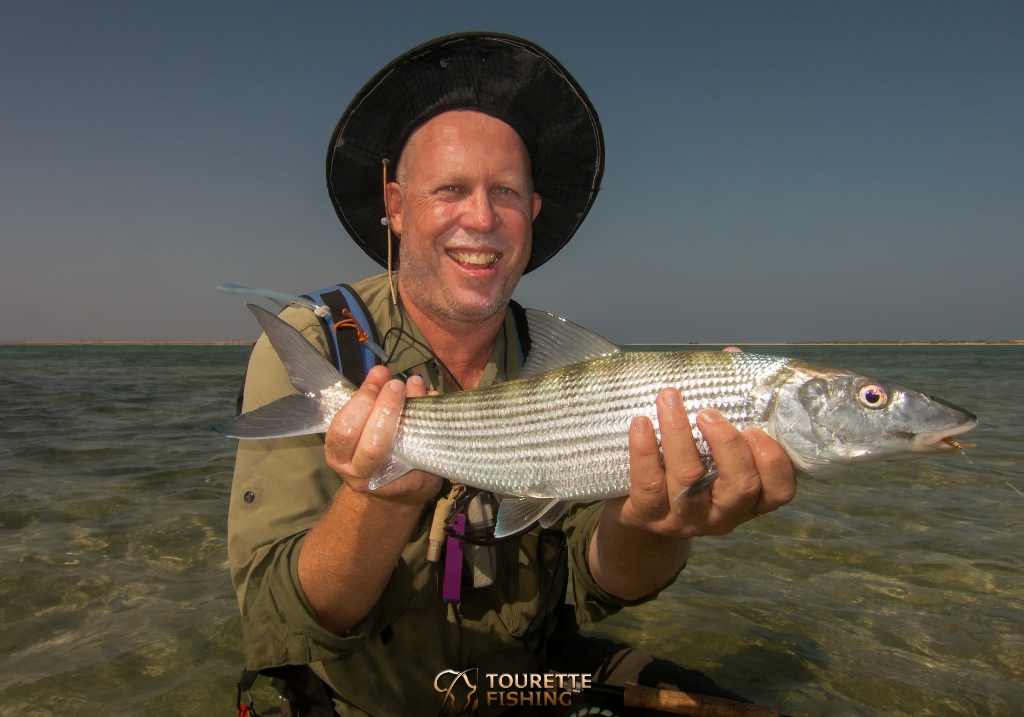 Another Nubian Flats bonefish. Not long till we figure them out now!!!

The other groups went to target the triggers, and they were nothing short of gale force. Everyone managing to get into the triggers. What was exceptional for us, as part of the exploratory process was that Ed called in the radio and confirmed, once again that he was seeing numerous shoals of bonefish, but couldn’t get any to eat. After numerous fly changes, he finally managed to land a great fish around the 5 pound mark!!! Not a huge fish, but certain confirmation that the fish we were seeing were indeed bones, and that there was some other much bigger bones cruising the flats.

The next day we moved the mothership to another island and flats complex. On the lee of the island were hundreds of feeding milkies. 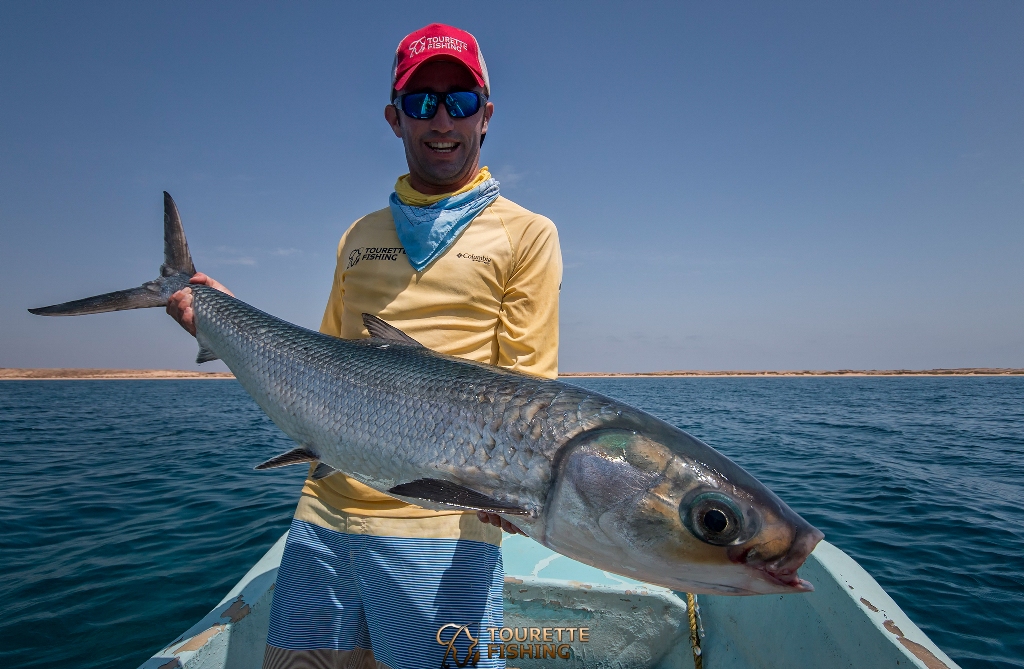 One of three Milkfish hooked in a session. many more to come!

In no time at all Ed had hooked and lost two milkies, from the flat. Mark managed to pin an exceptional milky of 109cm and 35lb’s. The whole team was absolutely pumped with the milky.

Interestingly, since the milky died, we cut it open to discover some interesting things in its stomach. We are busy tying some other experimental milky flies, and if we find them again, we could have something extremely special on our hands. Watch this space!!

Anyway, this week has been exceptional. The weather forecast has just come in and looking pretty windy for next week…. this will mean a change in where we had planned to move the mothership. 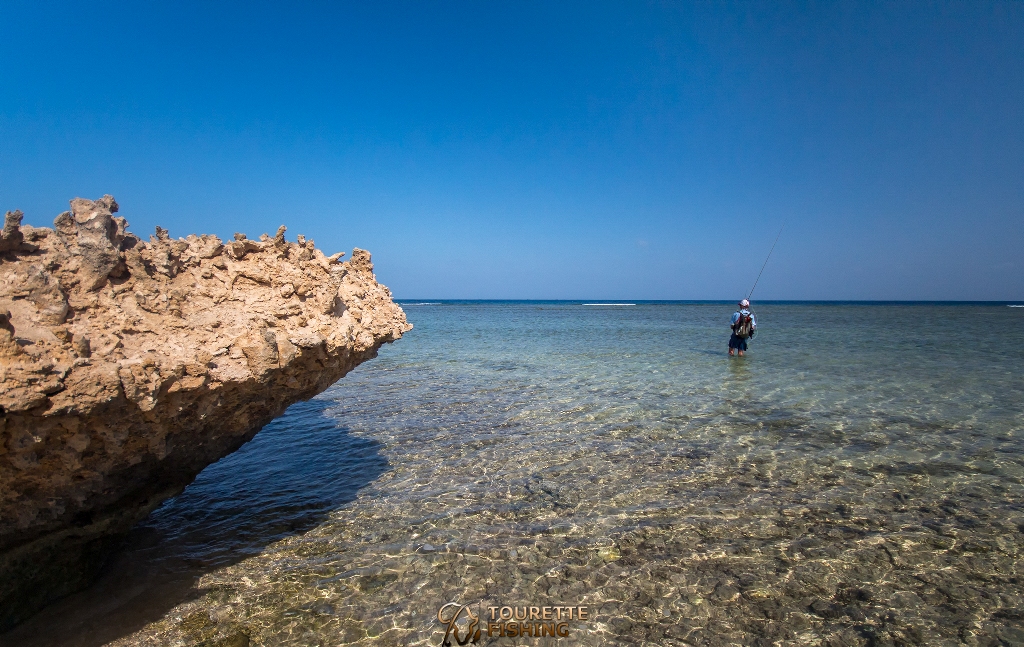 Where to next… follow the blog to find out!

More on this in due course.