(Photos: please excuse the quality of the pics, being an unguided exploratory trip everyone was on their own self-help mission and some of these are just GoPro grabs. Photo credits to: Tim Falderbaum, Robert Schneider, Luc Malbois, Andreas Wolf, Pierre Joubert, Ed Truter)

I was last on the Red Sea in 2014, so it was good to go back. Every season the team sets time aside to expand their horizons to new waters or areas only fleetingly visited in the past. For this voyage, we headed to the Suakin Archipelago, a scattering of tiny islands 60km off the far-southern coast of Sudan. This is a subject by subject summary of what we found. 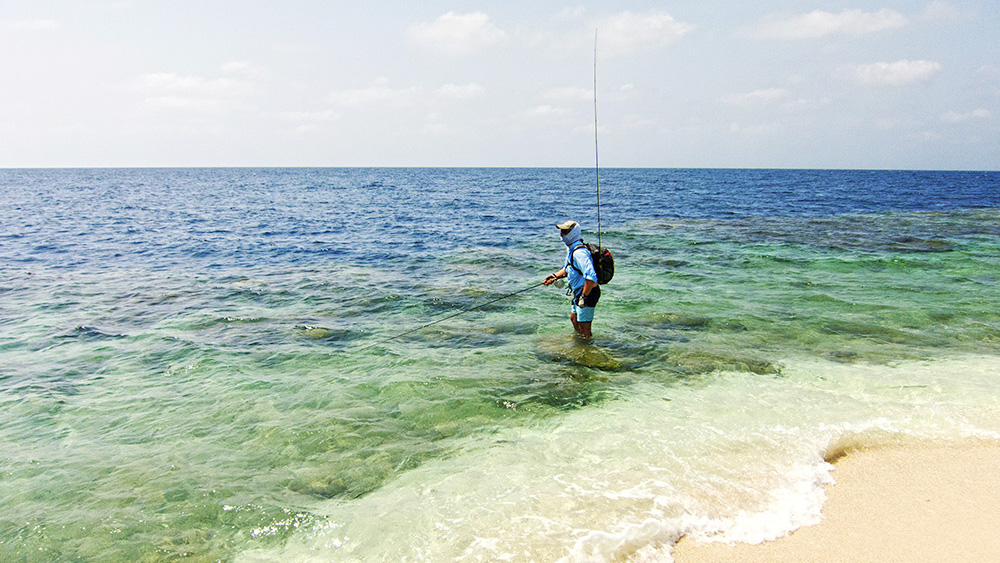 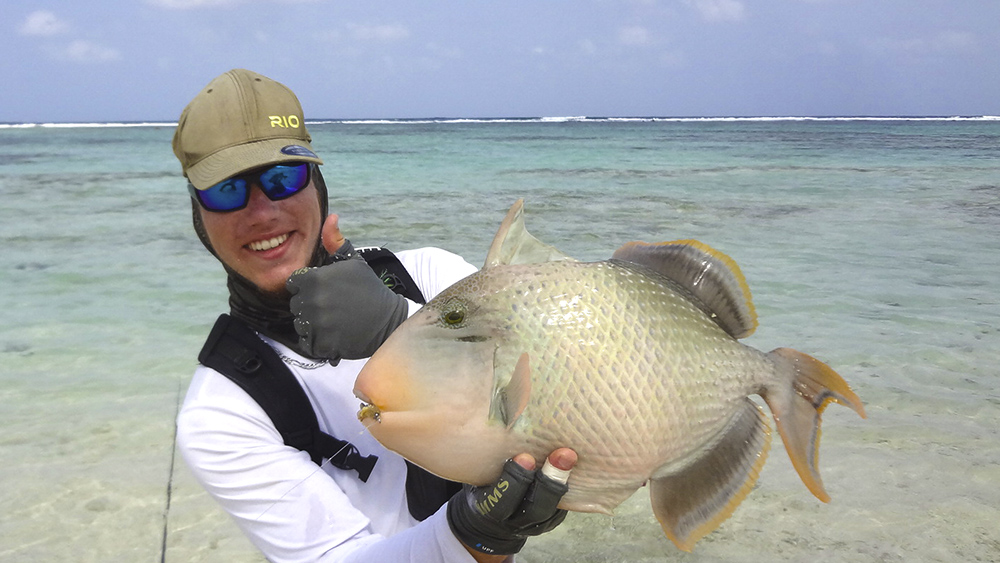 The group: This was an unguided (exploratory) trip, so we were thankful to receive a diverse mix of great (i.e. super-fun, passionate, and positive) personalities who were all very accomplished anglers. They came from South Africa, Italy, Switzerland and Germany. Each day the guys were dropped off to go and explore more or less on their own and then swop war stories at the end of each session. It goes without saying that those story-time get togethers were always entertaining and educational.

The weather: We couldn’t have had it more perfect, and were blessed to not have a single day’s fishing scuppered by wind or waves.

The water: The water was warm, probably because we weren’t far beyond summer and due to the calm weather and lack of circulation. The water was also low, yes, low, like the water gets low in a lake. That’s because in summer, evaporation and limited inflow can drop Red Sea water levels 1/2 meter lower than in winter.

The islands: The islands were all built around the same theme, a pimple of land atop a tower of coral reaching for the surface out of very deep water. In one spot the only land was a wave-bashed gravel mound the size of a bar room table, but some of the bigger islands were up to 10 hectares of scrub-covered, planetesque sand and gnarly rock debris. Beyond the land was typically a lagoon that varied from 10m to 300m wide, before a narrow section of raised reef that then shelved gently away over a short distance to a vertical-break reef edge. Last mentioned was literally an instant and spectacular transition from a brightly coloured coral garden to the purple abyss, with the coral cliffs falling away into depths of often well over 100m. And on this subject, I’d like to stress that I think that every visitor to the Red Sea in Sudan owes it to themselves to snorkel at least a few times during their fishing trip, even better, a few times a day. The underwater scenery and fish life is some of the most breathtaking on the planet, so take a mask and snorkel and carry it with you in your fishing kit.

Triggerfish: Let me start by saying that after this trip I don’t need to catch any more triggerfish, ever. Pretty much every island we visited had an abundance of titan and yellowmargin triggerfish. Some of the guests, on some days, chose to purposely not even look at triggerfish having got their fill the day before. We saw them tailing over all sorts of substrate but they seemed to like soft, muddy sand the most. Just because there were a lot didn’t make them easy and they stayed true to character by altering their mood from impossible to catch to nearly stupid. Most of the time they were on the tricky, technical side though. The most tailing triggers I saw in one day must have been at least 50 – 60. And that was over just a small portion of the flat as I never got more than a few hundred meters from the morning’s drop-off point before sunset caught up with me. My conversion rate on that day was around one in three, but other days it was more like one in six if I was lucky. We caught a lot of triggers in very shallow water and I mention this to make sure that you are prepared for such 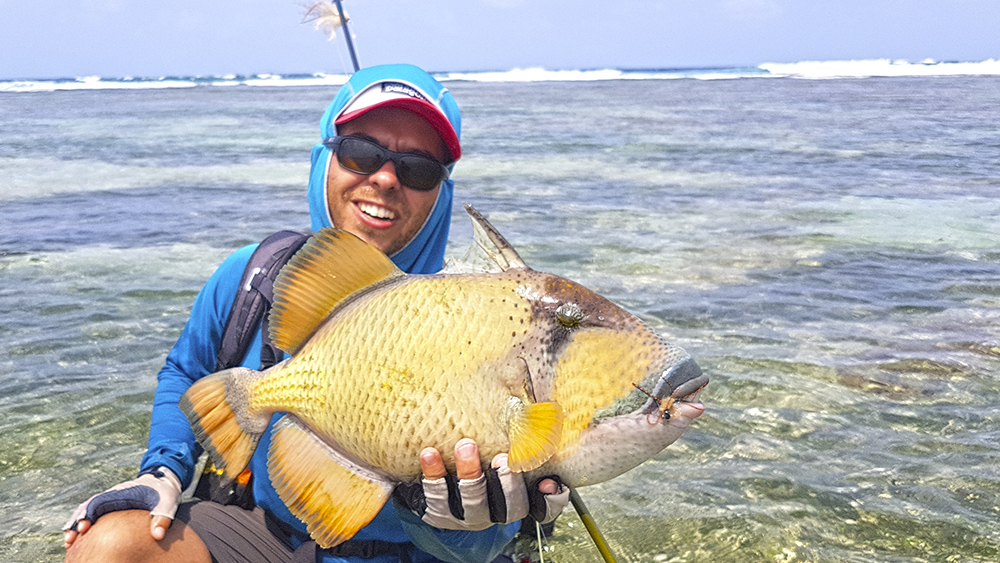 A titan triggerfish on a perfect Nubian Flats day. 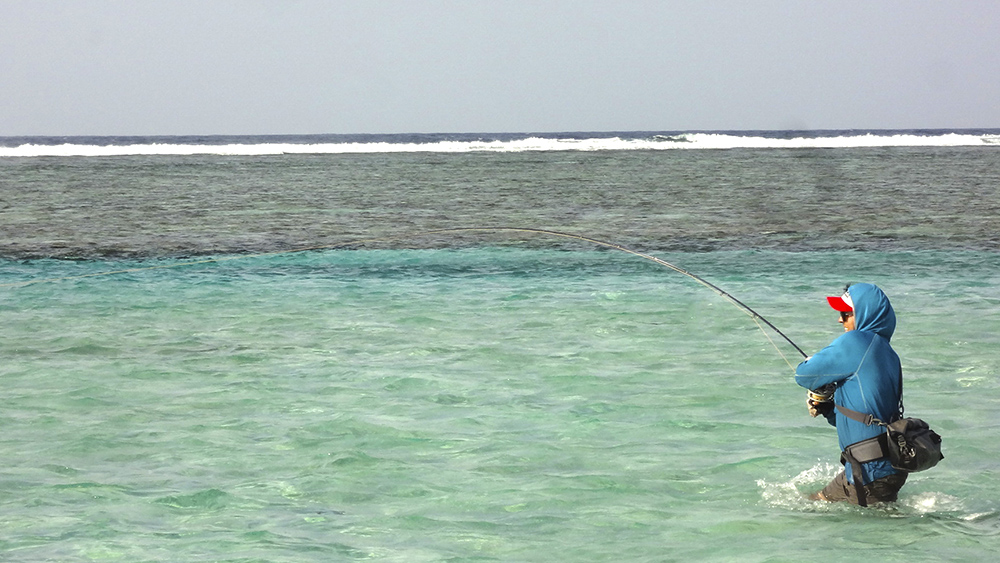 conditions with flies that are weighted (at most) with small or medium bead chain eyes, and even have some with no eyes. That way the fly can be placed quite close to the fish without spooking it. Tan and light-sand colours did best. And speaking of colour, next time you’re out looking for triggers, don’t forget that yellowmargins especially can literally turn the colour of ‘white’ sand when tailing over a ‘clean’ flat, and if your brain isn’t properly prepped to look for their ghostly form, you’ll easily walk right by them.

Bluefin trevally: In-between all the triggers was a more or less steady stream of bluefin on the flats, which would usually happily take any well presented crustacean fly tied for the triggers. Sight casting to bluefin on clean sand flats is one of my favourites, especially when they’ll take poppers. There were good numbers of bluefin on the tease (though we didn’t do much of it) and then just blind casting off the outer edge of some of the islands brought solid action from up-sized bluefin that came charging in, often in doubles or triples, to take a dark coloured Brush Fly, Semper or NYAP. As an extra bonus we also caught fair numbers of orange-spotted trevally (on the flats and off the reef edges) and Ferdau’s (aka banded or blue) trevally on the flats. These two species don’t grow very big but they take flies easily, and I’d be happy to catch them all day. 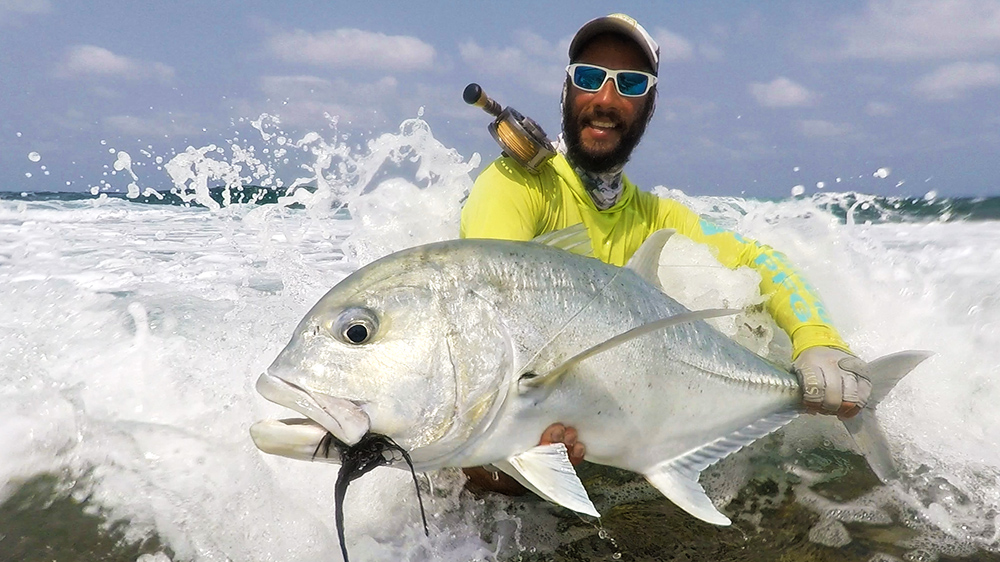 Nicola knows his way around a GT on the Nubian Flats, that’s for sure.

GT’s: The gangsters were a little conspicuous by their absence, which we attributed to the very warm water. Even the jiggery-poppery guys working the outside reefs and pinnacles didn’t get GTs coming up consistently, though a few did show on each outing and the biggest brought to the boat was estimated at 30kg. On the flats, the guys got a few shots, and a few were landed but there just weren’t the numbers one can usually expect as cruisers or on the tease.

Bohar snapper: The bohar behaved much the same as the GTs. I did see a monster one on a shallow flat that spooked at my fly, but that was it. And on the tease along the outside reefs they were as interested in chasing our junk as a vegan is in wolfing down a double-patty horse-burger. That said, blind casting off the edge got the guys a few fish that were behaving beyond the pack. I say pack because each time I strapped on my goggles and went for a snorkel over the edge of an island, I was usually greeted by a mob of bohar swimming up from the depths to come check me out. So they were there in abundance but we failed to tempt them from the fickle mood.

Bumphead parrotfish: At least four were hooked, all at one particular flat, where they were cruising in ones and twos. None stayed on for very long, and I have my doubts whether there was any chance at all for landing any of those fish as none were less than 30kg and the biggest was 40+. Taking that thing on with a fly rod, in that setting, feels like taking on a meteor storm with a dustbin lid, and I think that only if a galaxy of planets were to line up would one have any chance, but it sure got everyone totally psyched up giving it a bash.

Barracuda: Big ‘cuda are always a sight to behold and we saw our share, though most of the time they bit us off. A show I really enjoyed though was when a 15kg ‘cuda stole the fly out of the mouth of a 2kg bluefin, bit the fly off, then tried to eat the bluefin by cornering it against the beach. The bluefin was no chicken though and kept it’s nerve so all the ‘cuda got from the deal was a mouthful of foul feathers.

Grouper: Grouper, that range in size from the tiny peacock groupers that can be pestilent but are so pretty that we can’t get too upset at them, to the much bigger species put in a daily appearance. The bigger ones often won the fight though, and sometimes throwing a broken rod into the lesson for messing with them.

Milkfish: One island had good numbers of milkfish cruising the flats in small pods. They ranged in size from unusually tiny ones (2-3kg) to 20kg+ fish. None showed any interest in any fly cast at them except a single cruiser that followed a Jame Christmas sand prawn fly for a long way but would not commit.

Other: One doesn’t see as many sharks on the flats in Sudan as some other destinations, although they are abundant on the ‘outside’, but 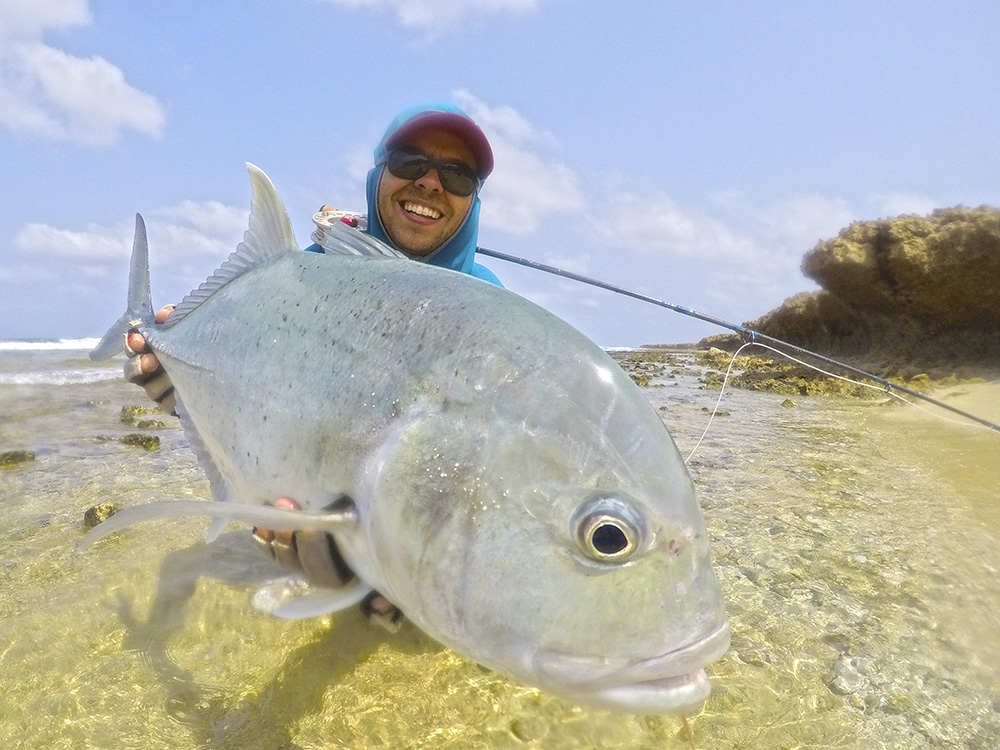 The smile says it all with this GT. A welcome break from the tiggerfishing 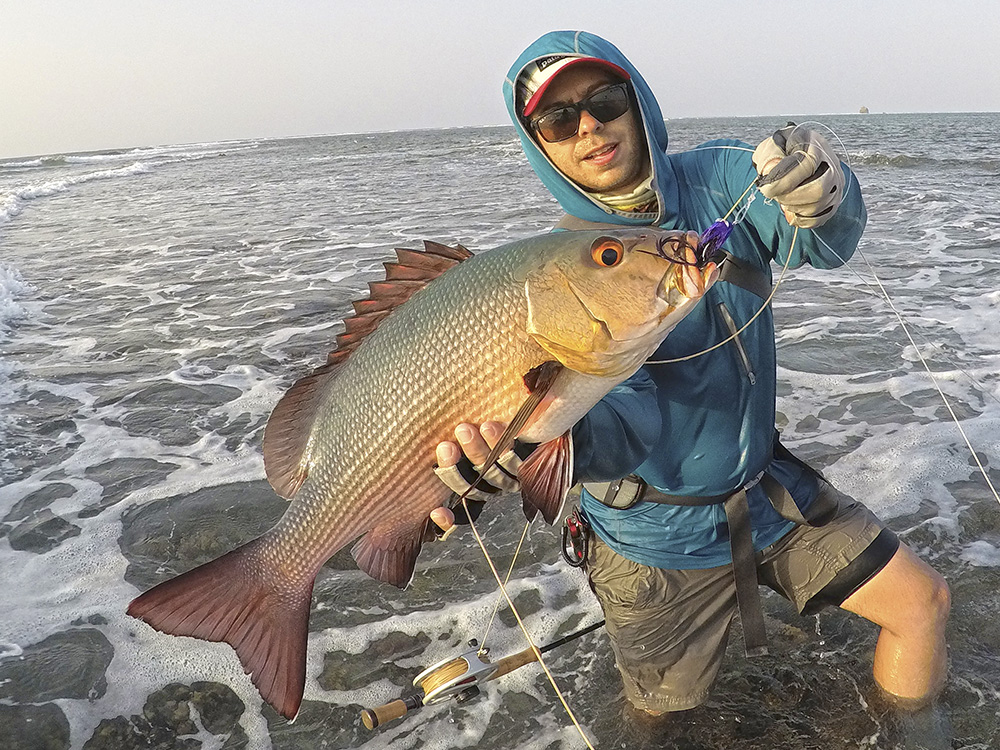 The feisty bull dog of the reefs and flats when fishing the Nubian Flats. Don’t give them an inch if you can help it. 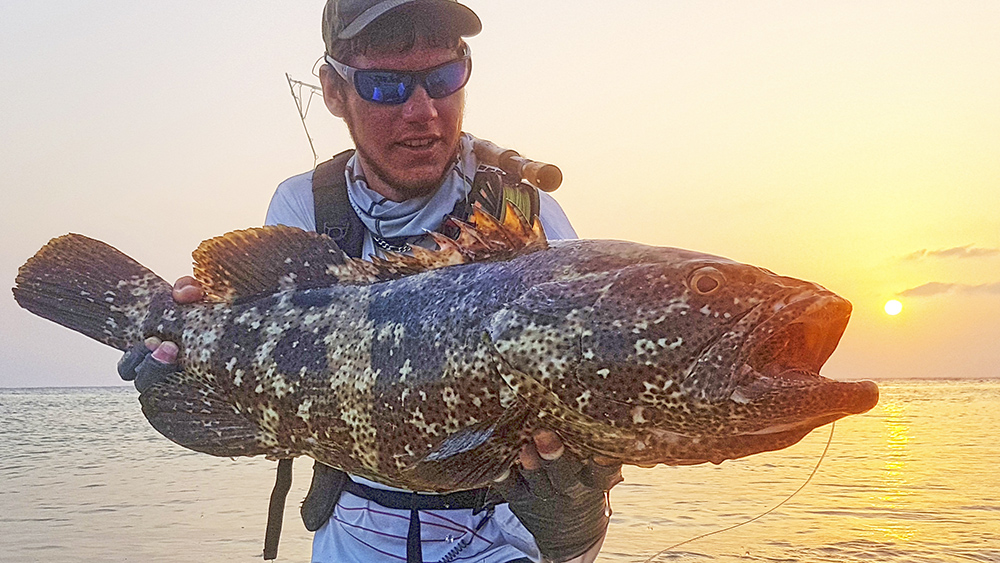 Big grouper on the flats are indicative of a healthy and pristine system. 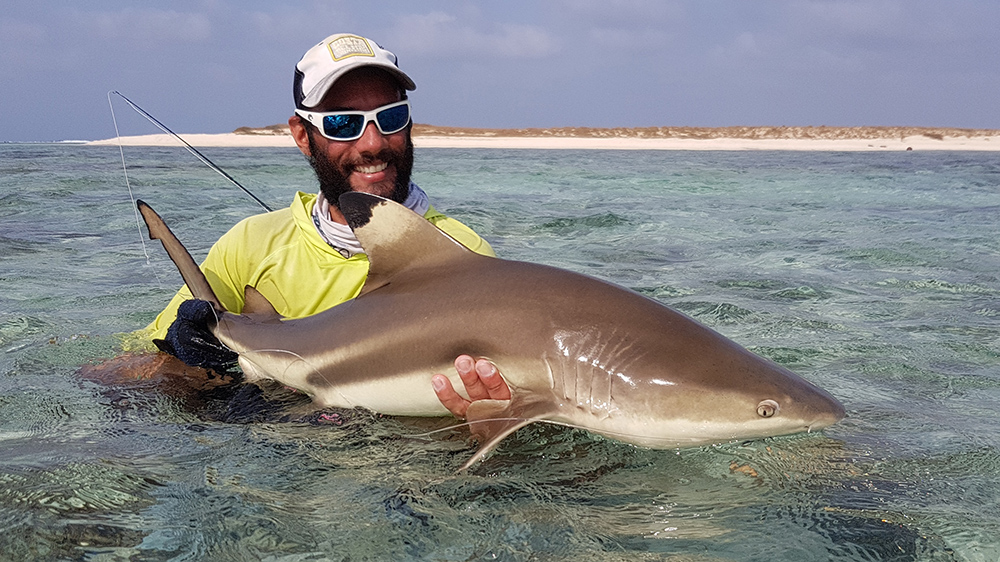 Not a common fish to target on the Nubian Flats 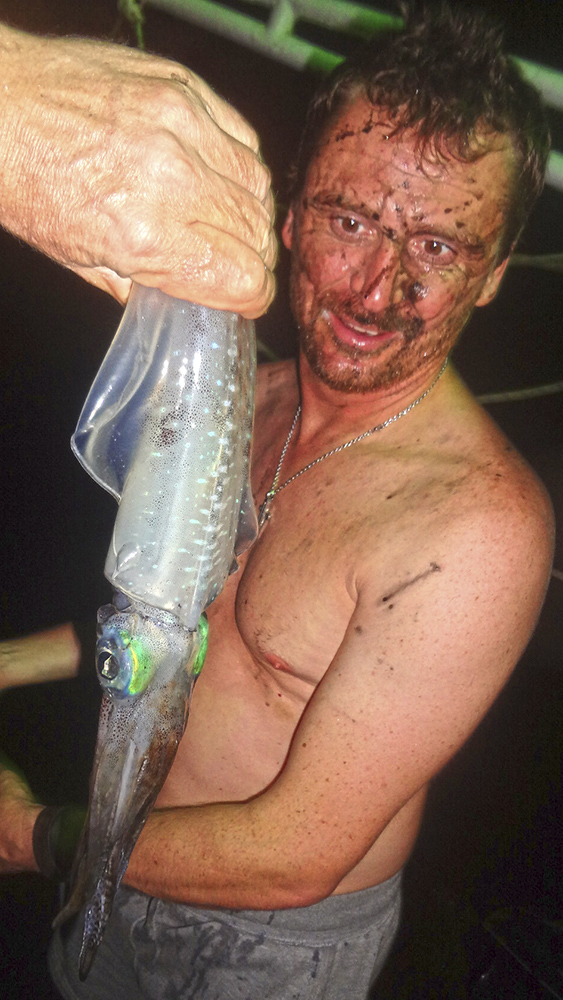 on this trip we walked into quite a few blacktips and some of those ate a fly. A phenomenon I’d not seen before was tailing longfin spadefish (batfish), which we found in a few places on the expedition, feeding right against the beach in very shallow water. And although it took quite some trying, we managed to hook two of them, but both came unstuck. I’m convinced though that with some experimenting with flies and presentation that they could be a great target. We found some great bonefish and permit habitat but apart from one or two sightings of small permit moving by in deeper water, and some fleeting glimpses of bones on another island, we didn’t have any moving onto the flats. Again, I felt that the warm water and too-shallow depths of some of the best soft-sediment flats was the issue.

Night time provided it’s usual thrills and spills around the boat, with things like chumming sharks and GTs on bread (!) and then catching a few on fly, catching squid and paying the price with a money-shot (see pic).

For those who have an interest in birds, the Red Sea islands always throw up a few surprises, usually by way of lost migrants but also because some of the birds have seen so few people that they are fearless. While wading one triggerfish flat I had a warbler of sorts come join me, sitting on my fly rod just in front of the butt. We had other weird experiences like swallows perching on us to roost for the night, and a scops owl found sheltering in a hole in rock on the flats that allowed one of the guys to just walk up to it and give it a head scratch! The Red Sea is certainly somewhere beyond the ordinary.

Thanks to Rob, Nicola, and his Crew for another top trip to a part of the world that remains something to see, and which thank you to the Sudan government’s iron fist and protocols should remain so for some time. 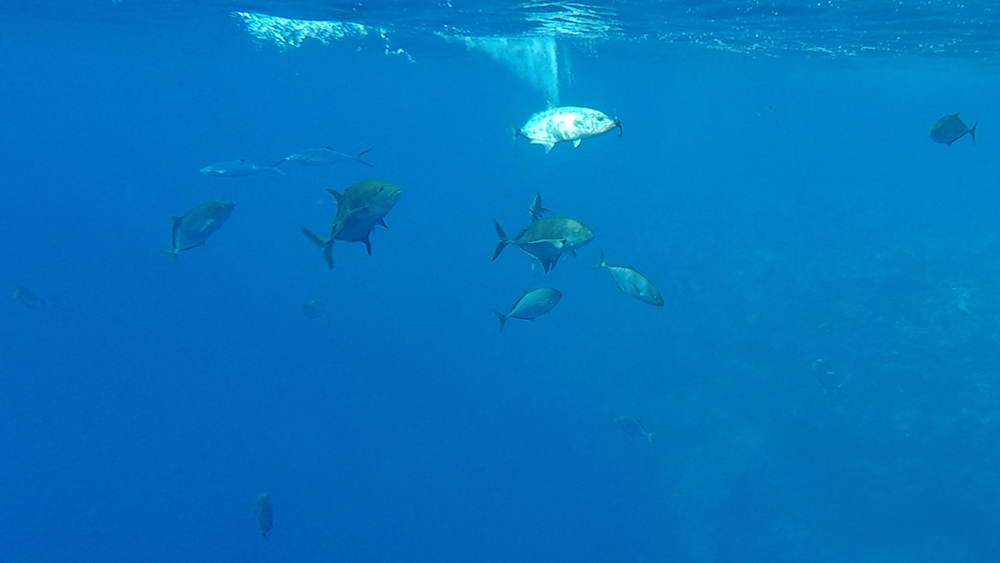 Fun off the boat
PrevNext