While Igor was commencing his second week and fished hard on change over day leaving no rest to be had, he was after more elusive fish on the flats. The days fishing involved landing a good sized Bluefin Trevally on the flats where many other fish were hooked but unfortunately either came off or got cut off on the nearby reef. It was also exciting to see three big black tip reef sharks on the flats which we did attempt to throw a fly at, yet they refused our offerings.

The first day on the flats proved to be the toughest days fishing of the season so far for Igor and the new guys in Sudan. There was not a breath of wind the entire day making flats fishing extremely hard and the fish extremely spooky. A few Triggers were hooked by newcomers to saltwater fly-fishing, Hamish.

They got the better of him though and managed to get to the reef before he could stop them. A bit of teasing was done yet the fish were very unresponsive due to the conditions making it a tough days fishing yet everyone thoroughly enjoyed it.

The second days fishing was the polar opposite of the first day with 25-knot winds and cloud, creating a new set of circumstances and challenges. Teasing could not be done as the wind created large swells and waves that were too big for a fly to be used effectively. As for the flats, the cloudy conditions made it extremely difficult to see fish. A few Triggers were hooked but again none were landed making it yet another difficult day for the gents In Sudan.

The third day in Sudan brought with it again another relentless windy day where the wind was blowing between 20-25 knots. Even though the wind was blowing immensely the sun was out making it easier than the previous day to spot fish. We tried a quieter bay to try and escape the wind. Hamish from Scotland managed to land his first two Triggerfish of the trip, two Yellow Margins and hooked and lost another four, making it a great personal achievement for his first saltwater flats fishing trip. Igor also managed to land a good sized Titan Trigger, he lost another two and got snapped up by a good sized bluefin on the 9 weight. The afternoon session proved to be very tough as the wind picked up even more and churned up the flats making it almost impossible to see and no fish were landed.

The fourth day we woke up to good sunshine and a massive swell which made it difficult to enter on the coastline. Our plan was to move South where we managed to find a gap to move in. This proved to be a good move as we had the best Trigger fishing the entire trip, between the 3 fly fisherman, we managed to land 8 Triggerfish and a host of other interesting species. There were many other Triggerfish hooked and lost but all in all, it was an amazing day walking the coastline targeting fish right next to the shoreline. The Trevally’s were however scarce and only one small Bluefin was landed during the day.

The second last day the wind was relentless. This made it difficult for the anglers to catch fish. Although many Triggers were spotted during the course of the day making a good cast to the was a constant challenge and only a couple of Triggerfish were landed during the day with a good shot on a GT that unfortunately did not commit.

The last day the wind was still predicted to blow strongly. We decided to fish an island that had a somewhat sheltered shoreline from the onslaught of the wind. This proved to be a good move as the Trevally were out to play. Hamish landed a few Triggerfish as well as his first decent Bluefin on the fly and missed an opportunity on a good sized GT and Barracuda. Igor was still in his pursuit of a GT and so we concentrated our efforts on this, we had a day to remember as the GT’s were very aggressive and we managed to land two of 80cm and lost a third which was close to a meter. Making the trip end in an amazing way and memories that will never be forgotten.

Although the week was tough with the weather, the anglers and guides persisted. Just goes to show never give up because your dream fish can be caught in the last few hours or minutes of a trip. 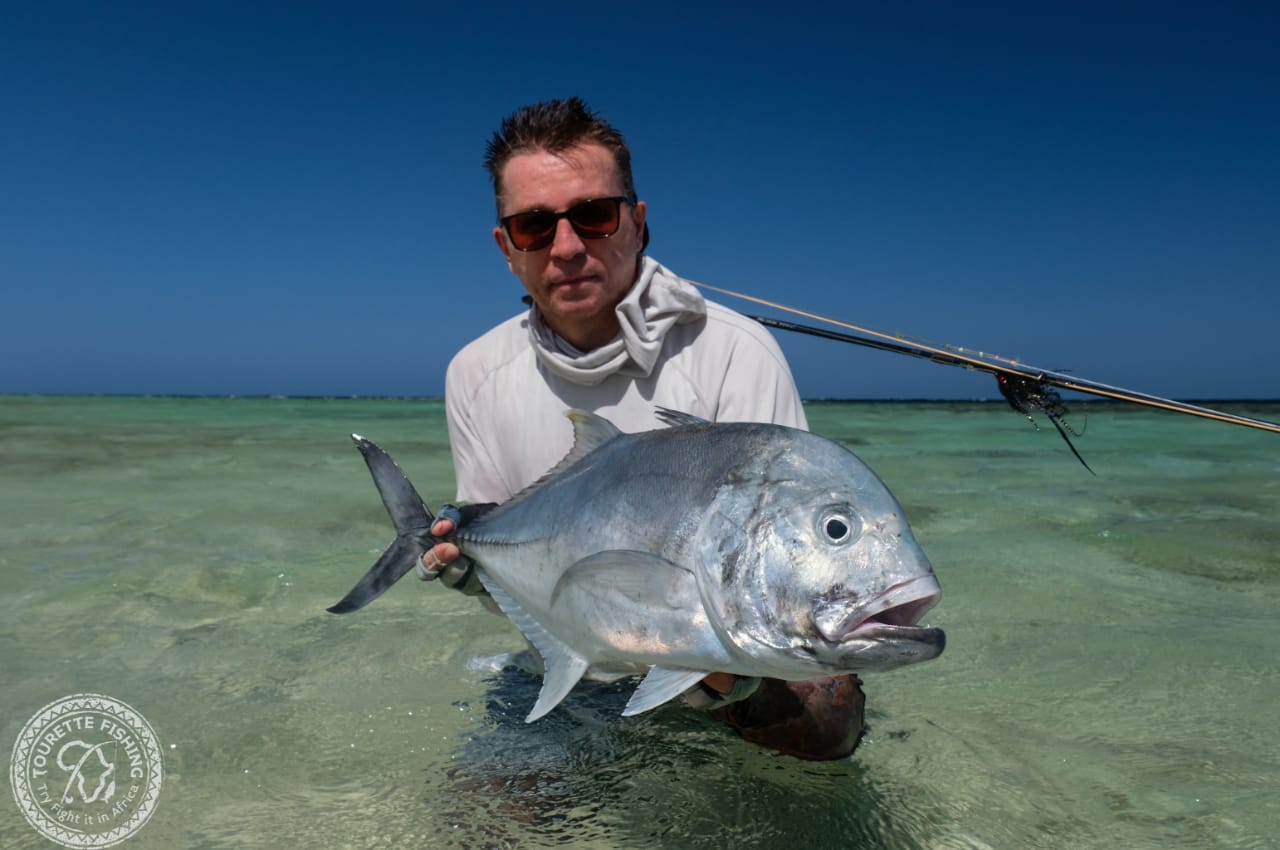 Igor with his second GT on the last day. 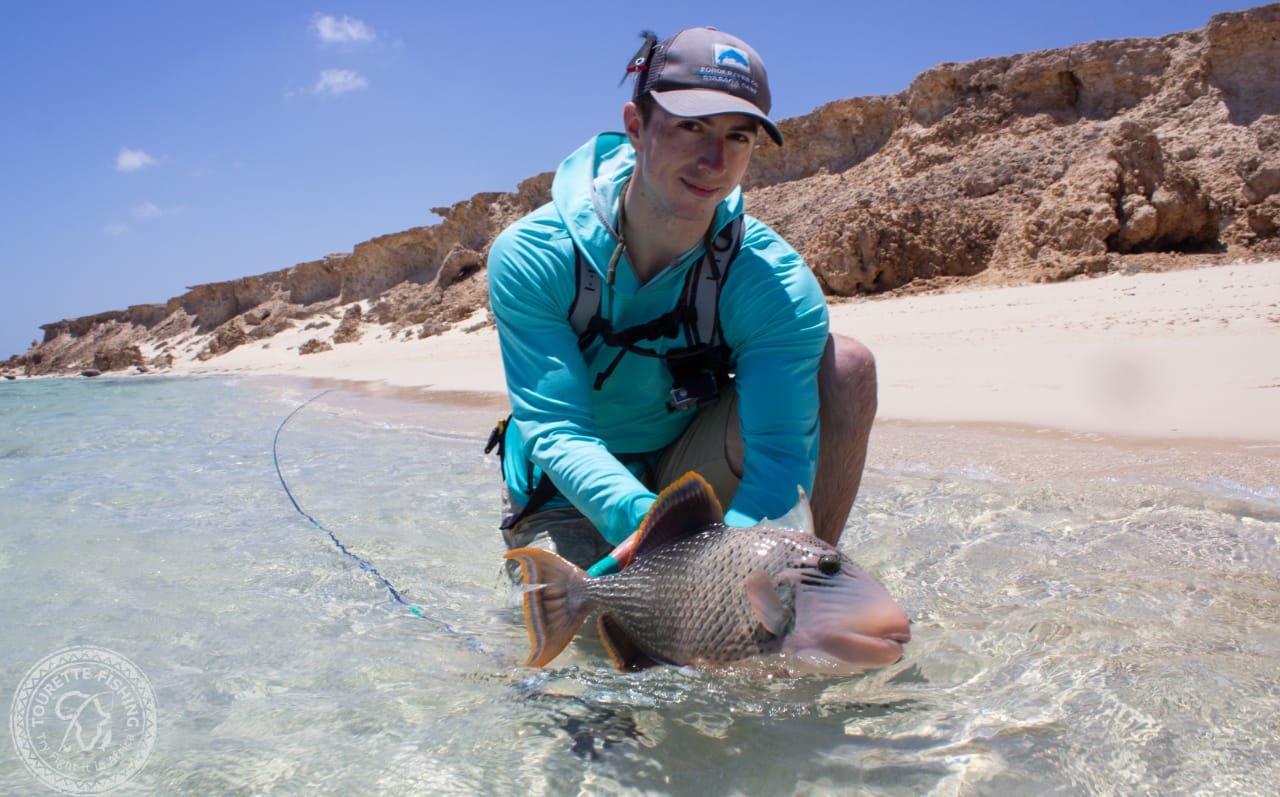 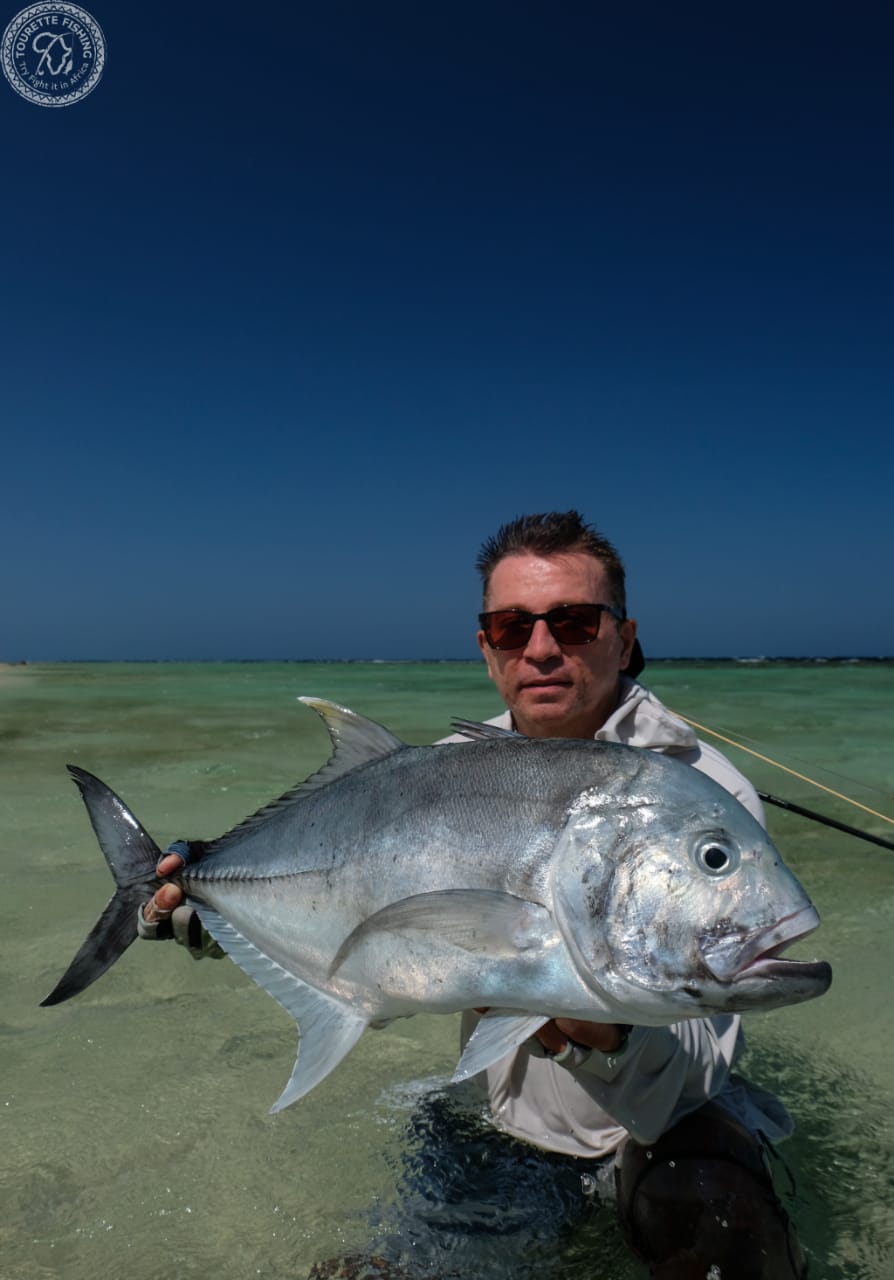 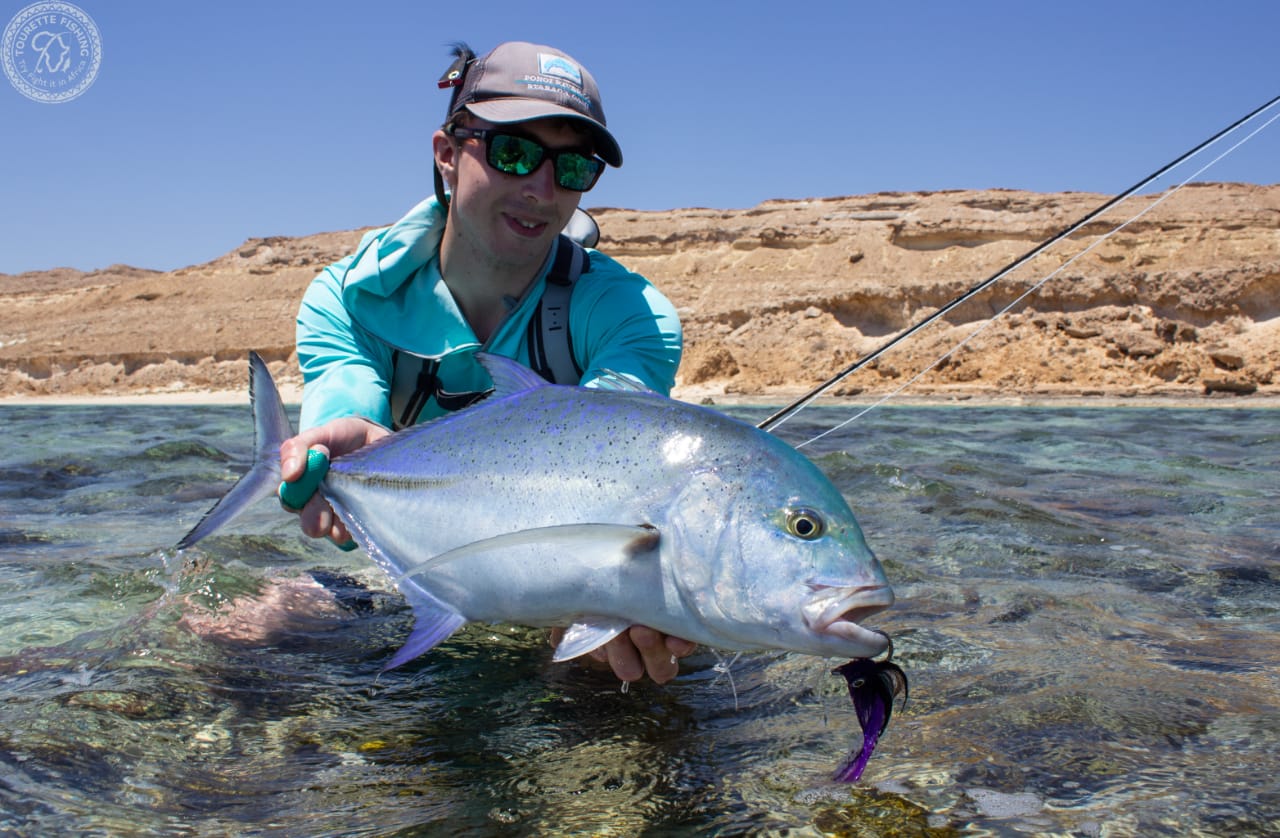 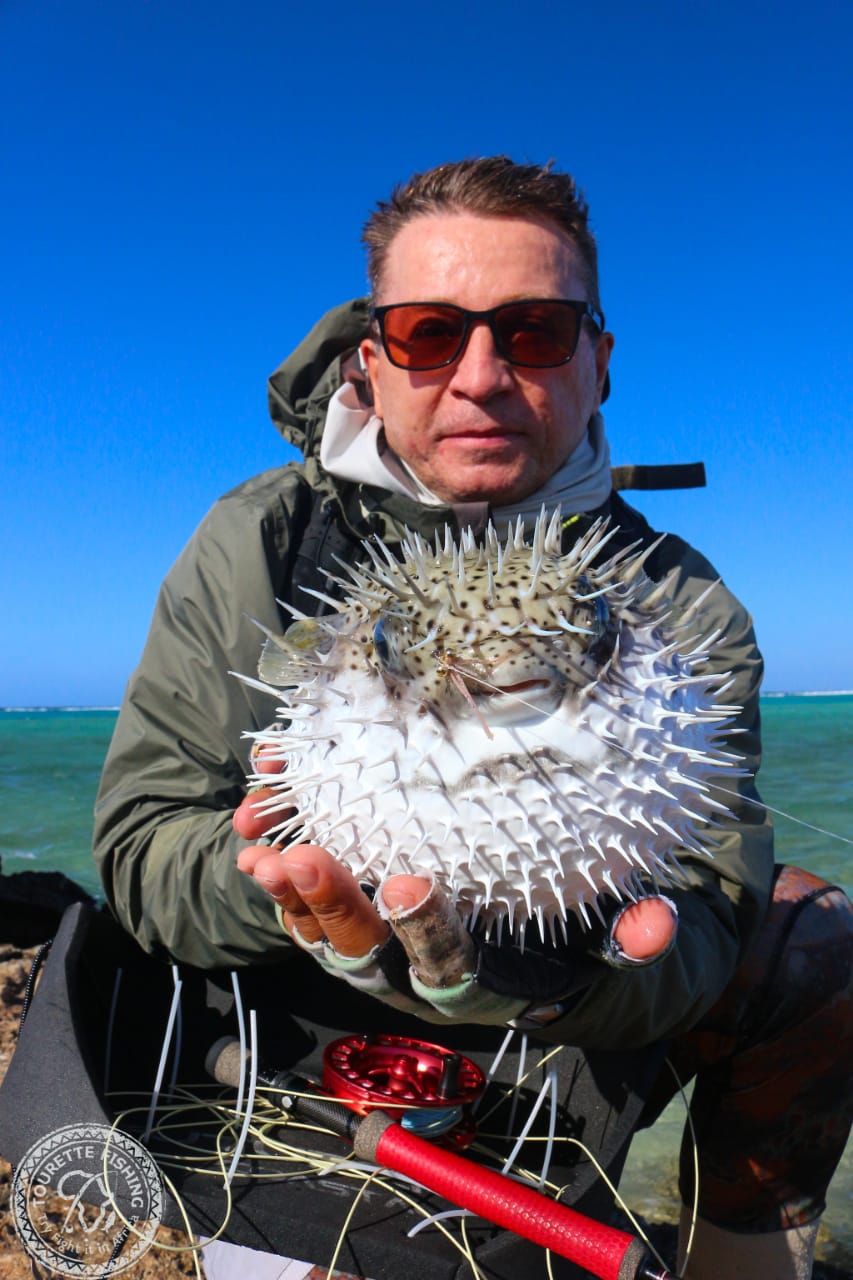 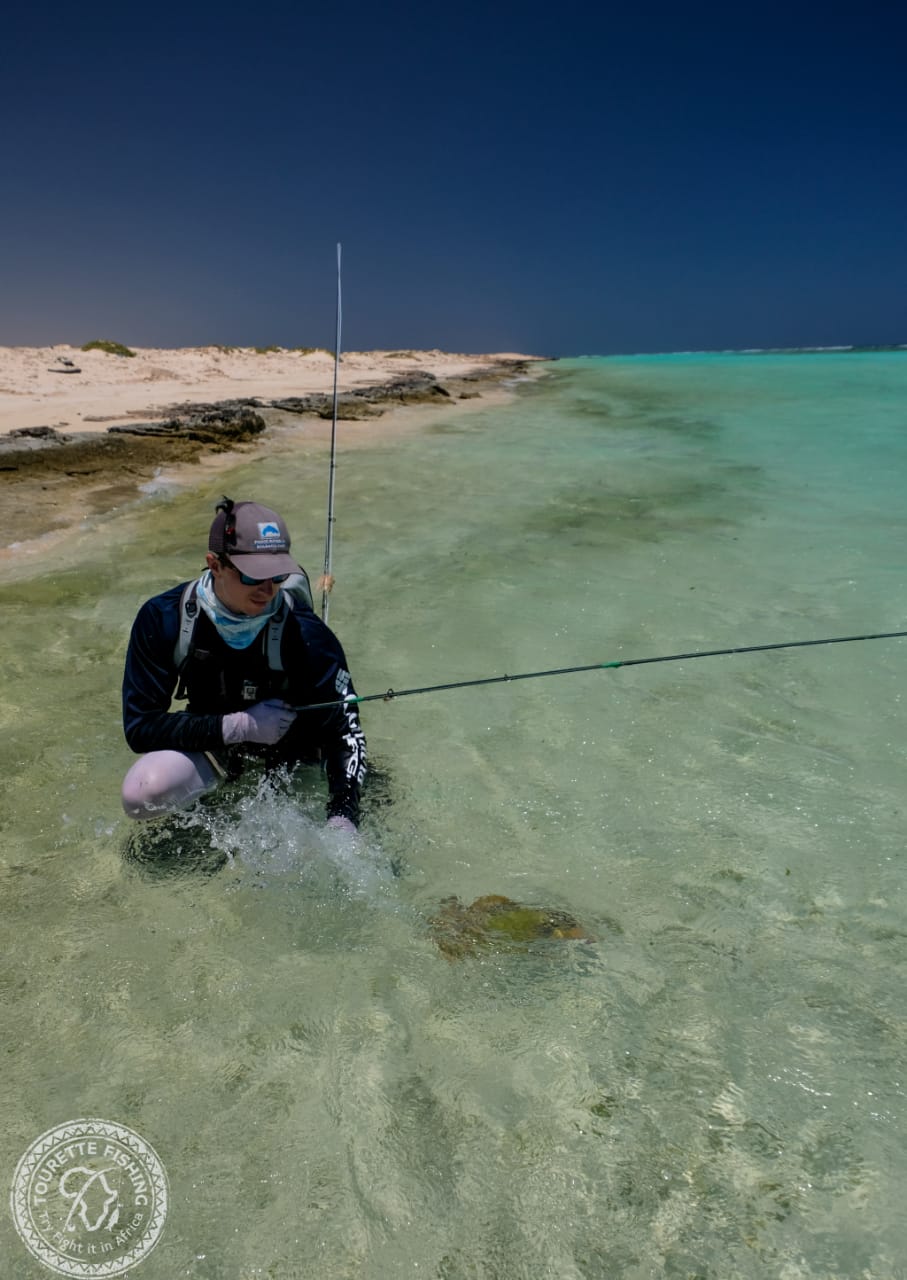 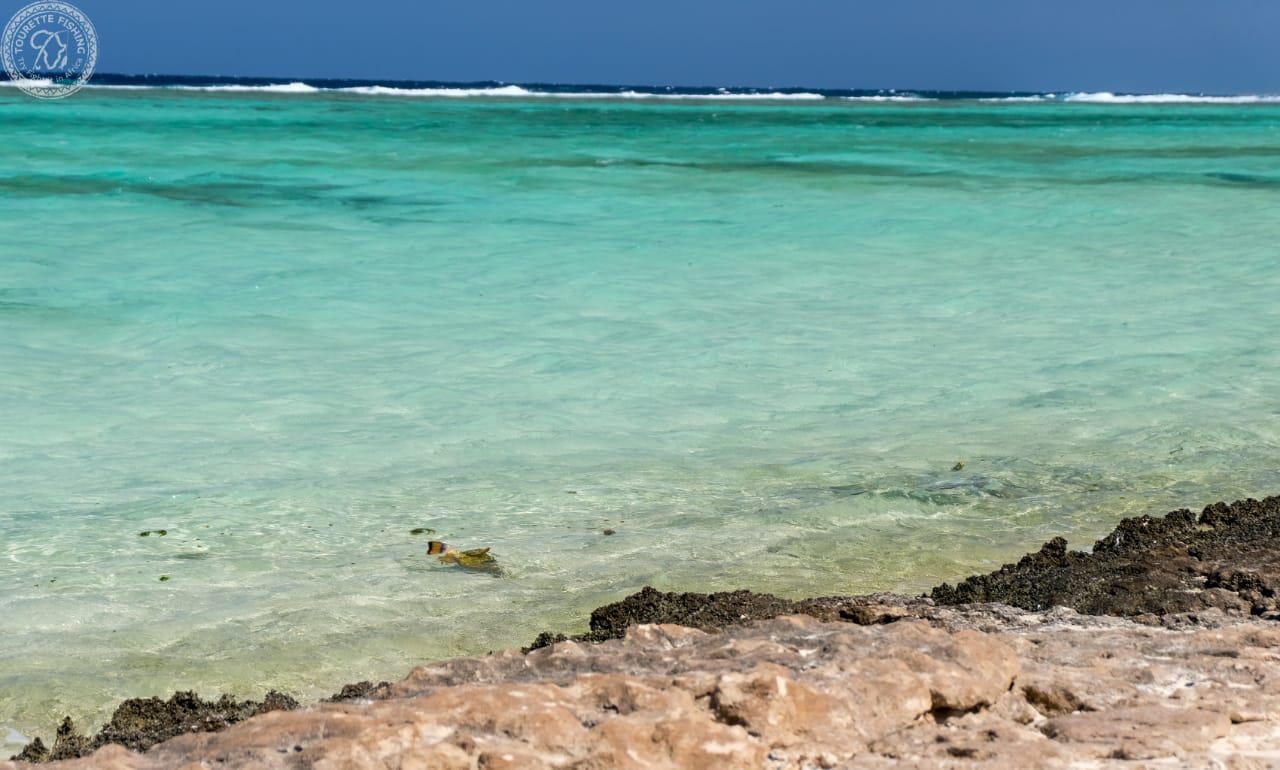 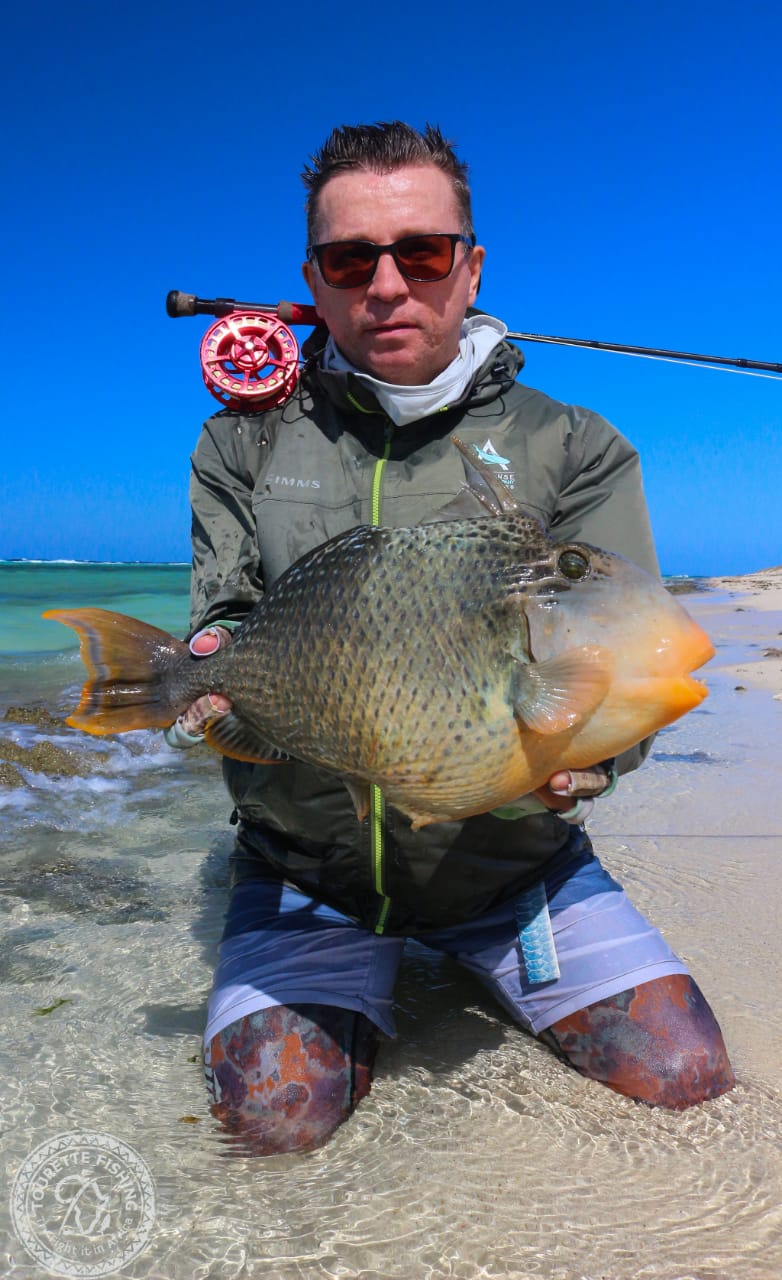