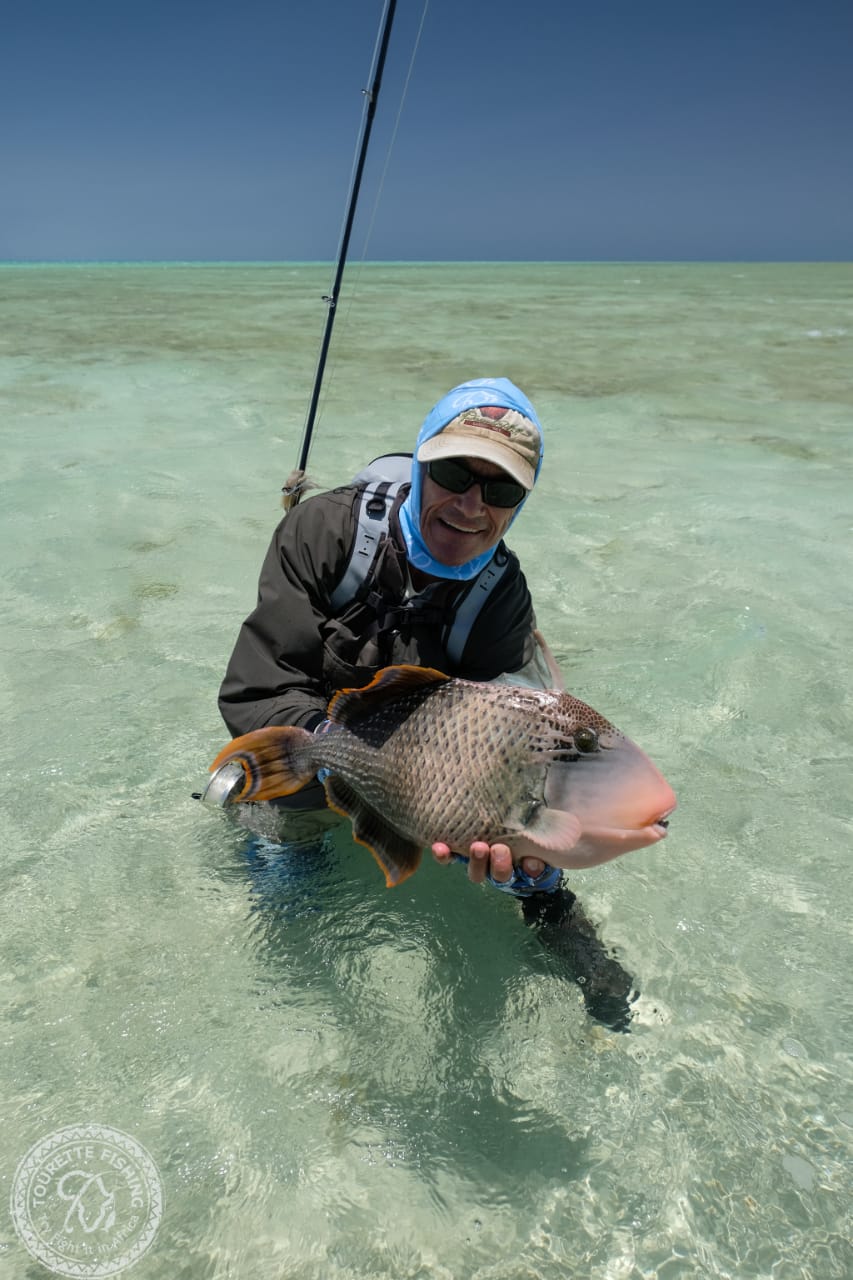 Brian with one of many triggers landed during his week on the flats.

The halfway mark of the Sudan season brought in guests Brian Griffith, Hein, Thomas and Jackson. Each eager angler arrived with certain goals and boxes to tick which of course made for a very dedicated team of fly fisherman. High spirits and excitement on arrival gave me a glimpse of what the week was going to turn out to be.

On our first day out the wind pumped around 25 – 30 knots. This made casting a nine and twelve weight a very challenging task. A call was made to stay close to the mother boat in case we had to make a quick escape off the water. Brian, our Tourette Fishing destinations veteran, skillfully landed a yellow margin trigger fish on his second cast. This fish added another tick off his ever growing species list. With three more triggers for the day, Brian started his week a very happy man. Thomas who had a long, unfortunate history with the infamous trigger, managed to land two for the day resulting is his first ever on fly. Hein battled out the tough conditions and also got on the board with a beaut of a trigger. With the weather predictions showing a drop in the wind for the rest of the week, our team went to bed eager and hungry for what the never ending Nubian flats had to offer.

Waking up to a somewhat calmer morning, Jackson joined the party with his first two Triggers ever on fly, a great accomplishment. Hein joined Jackson by landing a series of Triggers throughout the day. With the water levels pushing higher than usual, the GTs where on the prowl. Jackson had the first good shot at one, but unfortunately the fish proved to be just out of reach. This meant only one thing, game on! Brian, who persisted with his custom fly ‘the Extra stout’ for his species hunt, racked up new species consistently. 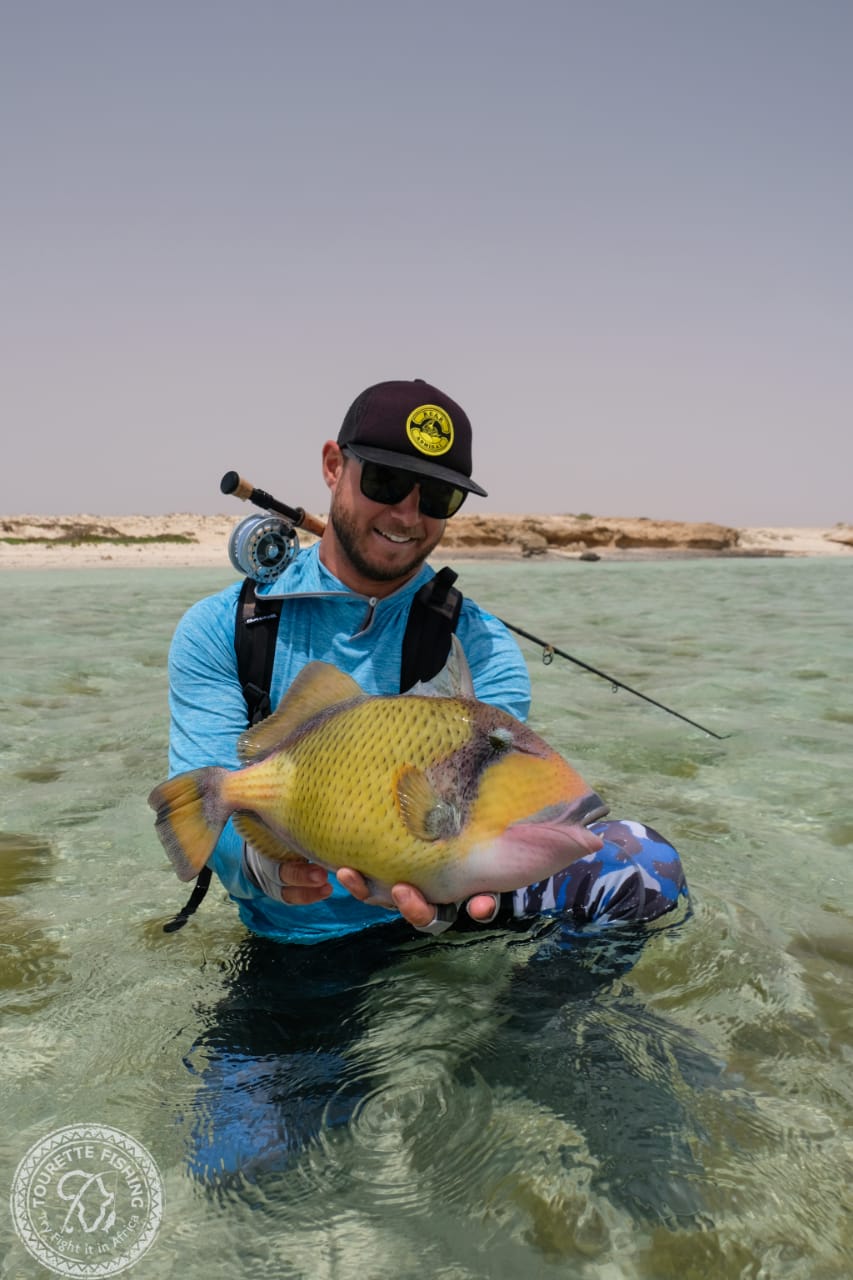 Jackson with his first ever trigger on fly. A special occasion for both angler and guide. 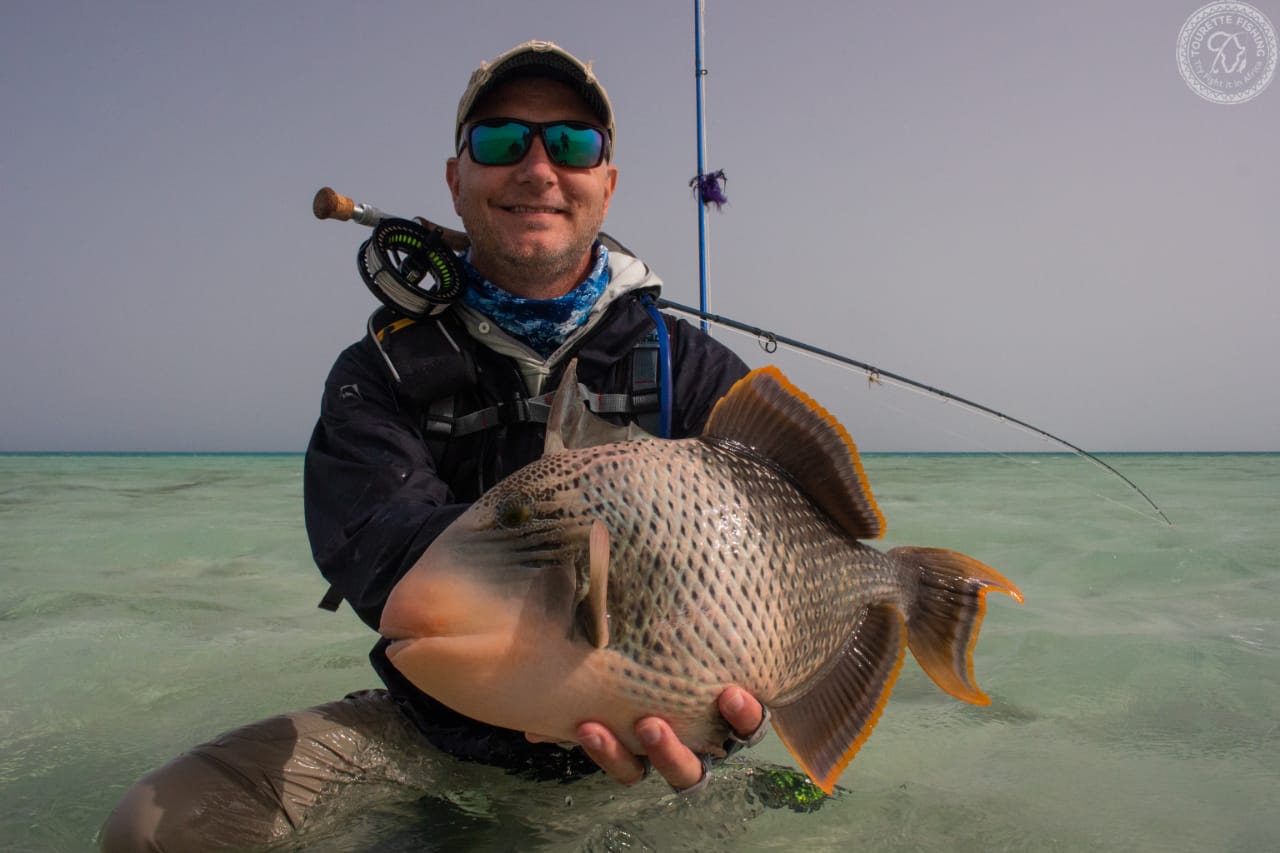 Hein getting in on the trigger action which was firing through the day. 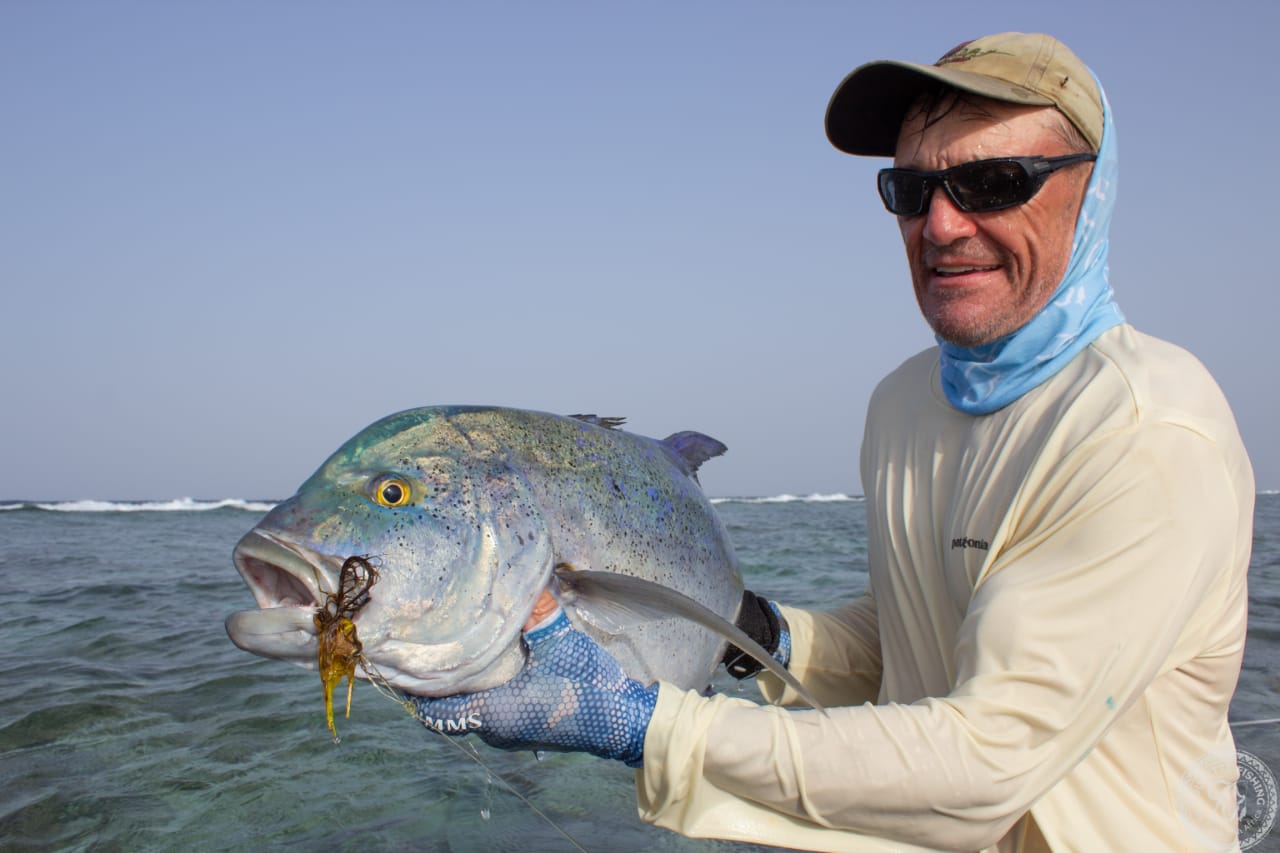 The wind now hardly in play, allowed us to sail far up North in search of more flats and fish. The triggers were really aggressive and surprisingly responsive which lead to a productive day with all guests landing triggers throughout the day. The Geets added to the excitement by smashing bait fish and cruising proudly around big stingrays. These big, bad hunters proved to be too smart for our team, leaving them empty handed and the board still open. Bluefin trevally sufficed the hunger to an extent with consistent numbers landed all day. Jackson was heartbroken by a huge bonefish that left him backing in hand after the fish screamed away and popped the hook. The Gts gave us sufficient fun the rest of the day but still managed to get away from the dedicated anglers. Game still on!

Be careful what you wish for is the old saying…and our wishes came true with the wind completely dying leaving the flats glassy and motionless. This made the trigger fishing very difficult for everyone. Fish would either totally refuse the fly or spook at 25 m. Only one Trigger was landed on the day, so we resorted to teasing which proved to be a success by an impressive 80cm GT being landed. A spooky incident happed when a Bluefin and a barracuda where eaten off the hook by two massive GTs. Shows how destructive and mean these fish are. 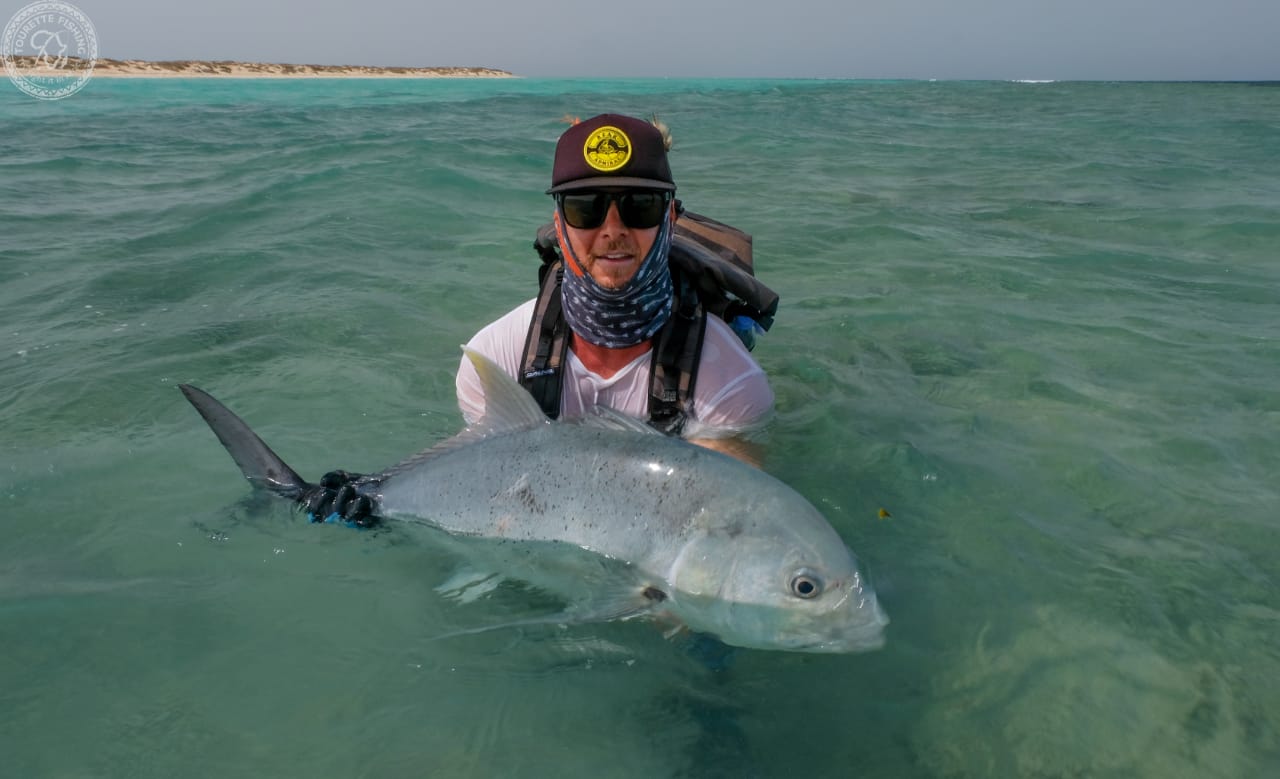 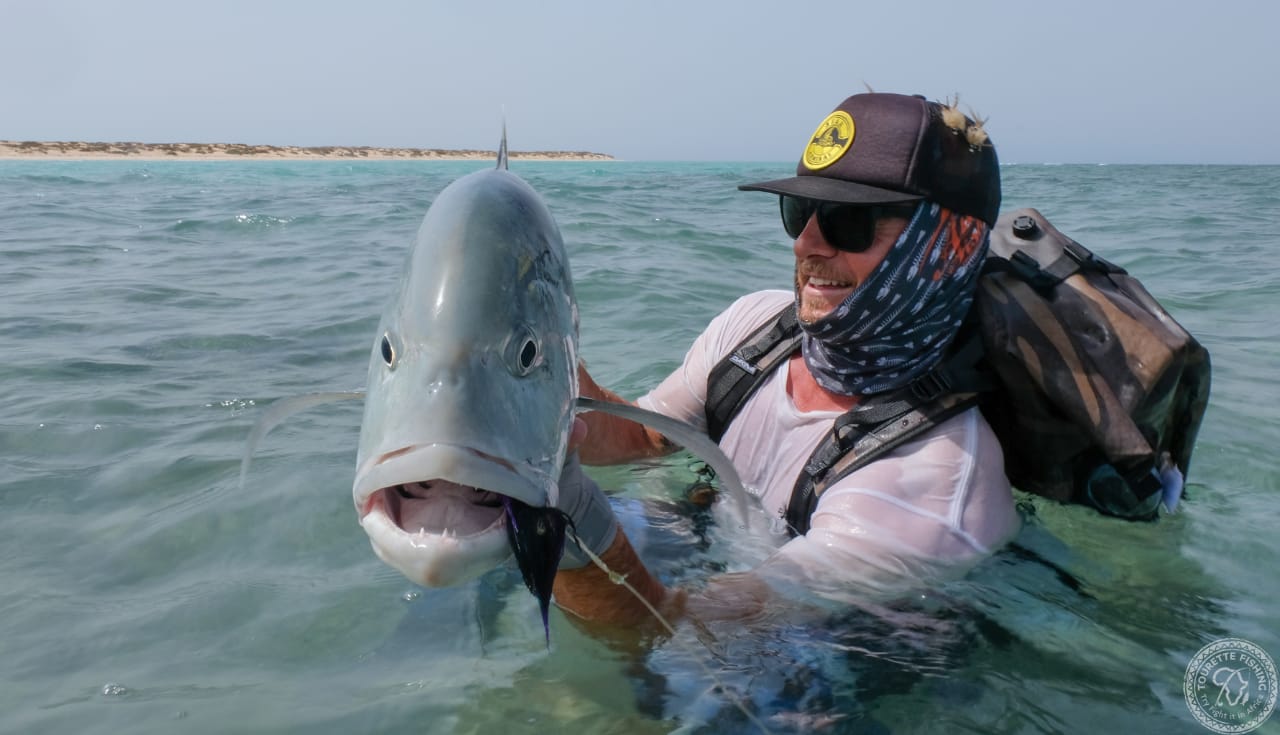 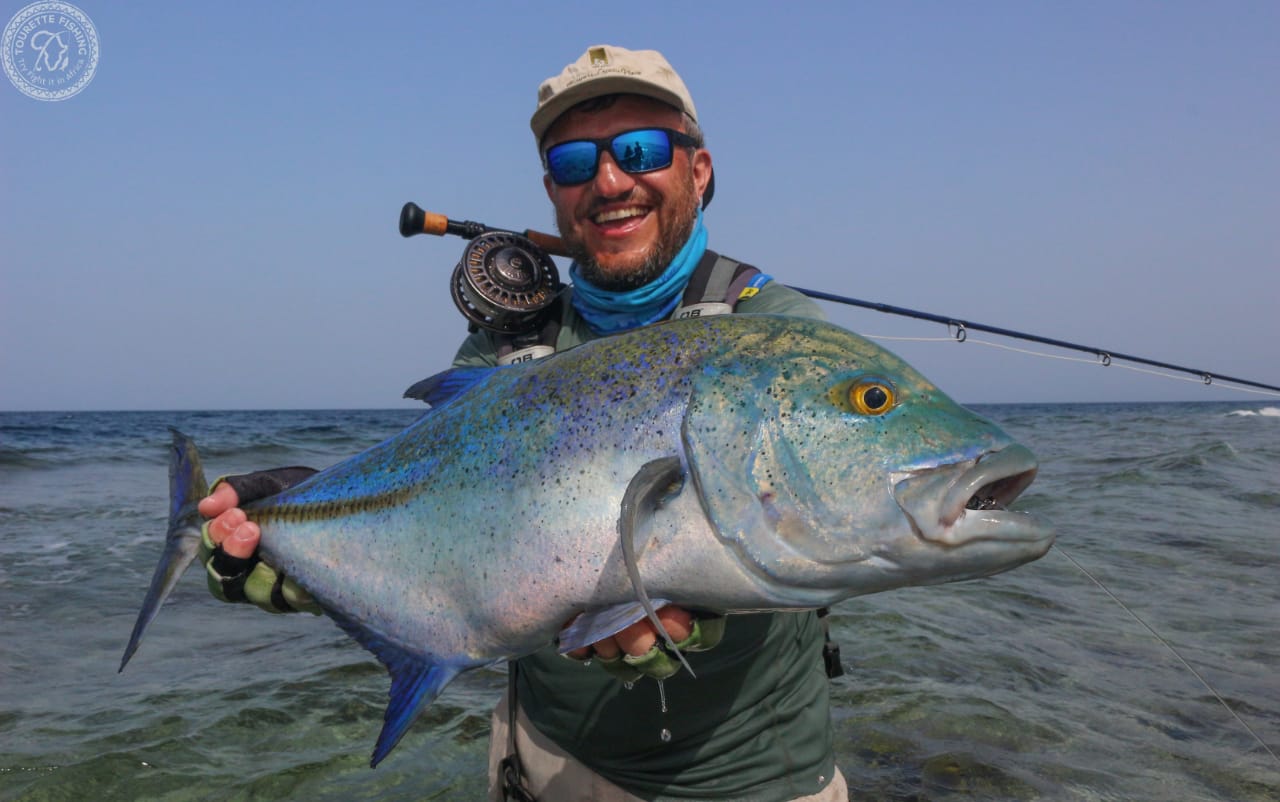 The big, bad bluefin. A very impressive fish from the Ukrainian guest. 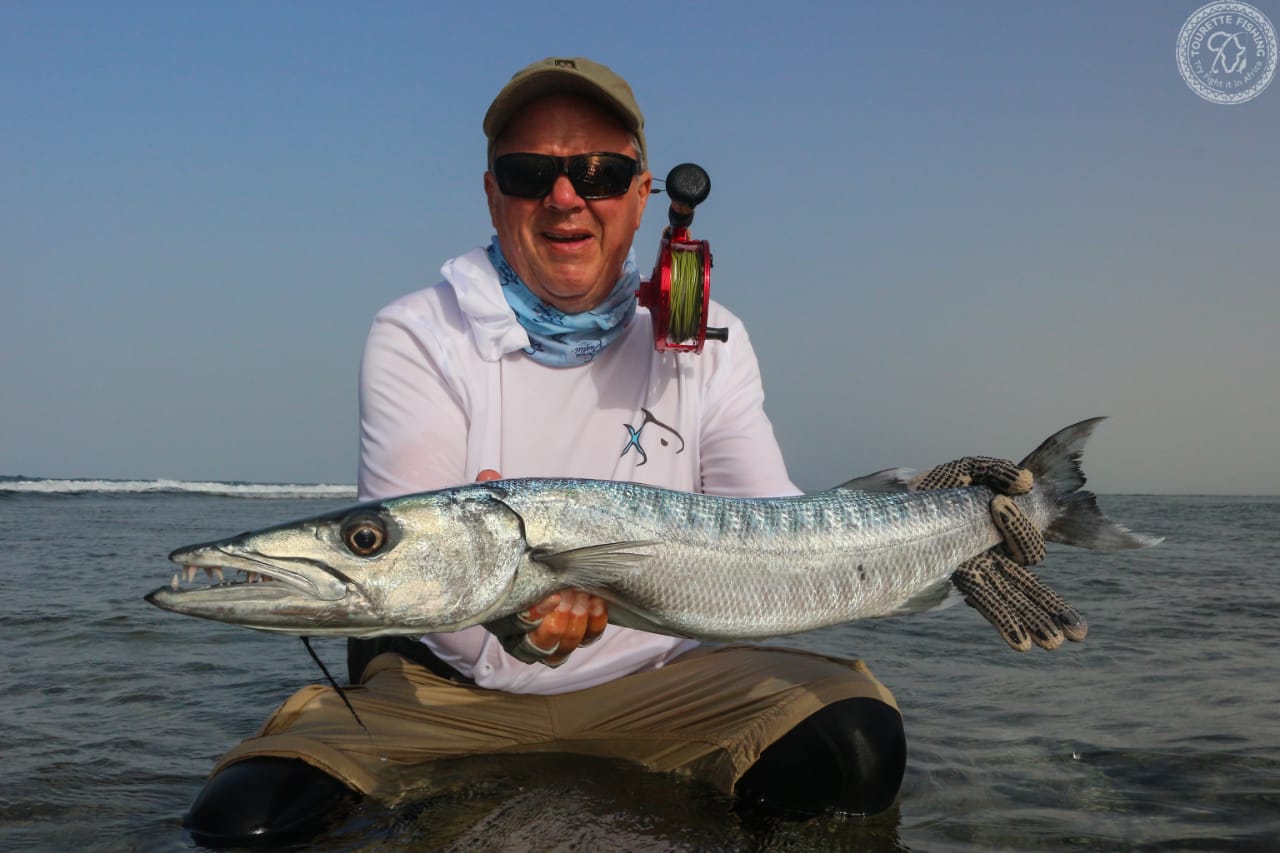 Thomas boasting a nice sized barracuda that he manged to keep from the hungry GTs.

The next day we planned to sail south and launch the fibres early morning and meet up with the mother ship in the evening. Some decided to fish the flats, while others chose a coastal walk on the apocalyptic beaches. With the wind almost non-existent once more, the flats were again tough for Trigger fishing. The coastal walk gave us enough cover out of the water for one of the groups and allowed a decent number of Triggers to be hooked brought to the net. Brian also managed to rack up his 64th specie on the Extra Stout with a huge 15lb Bluefin Trevally.

Before everyone knew it the last day of the week dawned upon us. We set out for one last time, broken but determined! It was a challenging day, the water was extremely high making the triggerfish spook easily and in certain areas the water was really murky due to the high swell. One Titan Trigger was landed by a guest of Wild Sea Expeditions, our partners. There was one really special moment for Jackson White, he unfortunately missed an opportunity at a GT on the flats as the fish ate his fly but the hook didn’t stick. Thankfully he redeemed himself by landing a geet of 95 cm on the edge of the reef. A very daunting task which he skilfully worked up and over the drop off with the aid off a swimming guide. What an end to a great week.