As it goes, Sudan is no normal destination in terms of travel and fishing. It constantly tests you as an angler and guide and the first trip of the season was no exception.

For starters, Graham Hutton’s bag did not arrive at the airport and thus began a frenzy to get stuff together for the week which also involved a stop off at the market for a clothes shop. After the initial set up the Scuba Libre sailed up the coast to begin the first days fishing of the season.

With everyone excited to wet lines and get some fish under the belt. The first day involved fishing the flats hard for some triggers and almost everyone either lost or landed a trigger on the first morning. Some teasing was done in the afternoon which raised a few geets and had some good sized Bluefin trevally landed for a few of the newcomers to saltwater fly fishing. This certainly got the adrenalin and stories started for the reunion back on the mothership.

The following day we were back on the flats to surrender some more fish to the net. With the water being colder than usual at 23 degrees Celsius the flats where very active. A few more triggers were landed by the South African duo of Robbie and Graham, unfortunately, the wind came up over 30 knots making fishing conditions impossible for the fly and we had to run for the mothership.

The following two days, the wind was still at this speed and forced us to stay close to the mothership, creating tough fishing conditions for the group. However there was a flurry of activity on the flats with many giant trevally being seen and hooked but were unfortunately lost. The Swedish guests were soon realising how demanding a place like this can be and for one guest Johan, he was feeling the wrath of the coral, needing his leg to be super glued and duct taped to close a bad cut that probably needed stitches.

The last two days of the trip were greeted with a break in the weather leading to the team being able to fish the flats comfortably once more. The second last day consisted of more triggers being landed as well as more Bluefin trevally. The anglers by this point were also gaining an appreciation for how unique this area to fish is and the challenges that it can present on a daily basis.

The last day of the trip we were delt yet another challenge as the water was lower than usual on the flats creating some skinny conditions. Triggerfish were there in fewer numbers, but really aggressive and receptive of the fly. Also a very large bonefish was hooked and lost creating some exciting action on the flats. This was an interesting days fishing with most of the group once again landing triggers.

An interesting first week in Sudan on the Nubian flats with a varied set of conditions that had anglers changing tactics constantly which allowed fish to be brought to the net.

The most important lesson for the week is to make sure that you pack your wading boots in your hand luggage as this is probably the most important piece of gear when wading the flats or drop-offs. Other gear can easily be put together but the right size of boots can be hard to find. 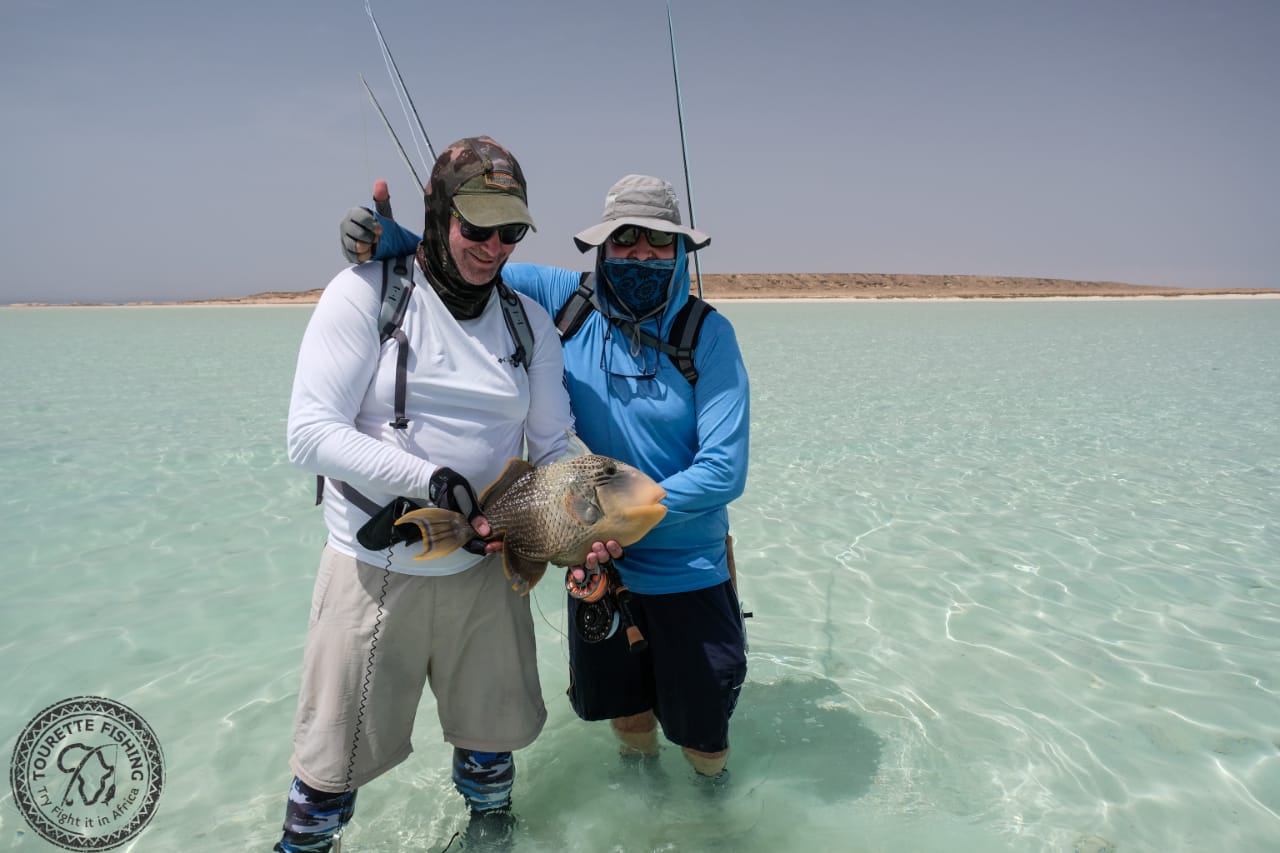 One of the most special things about the incredible destinations is being able to share you experience with good friends. here Robbie and Graham enjoy their third trip together. 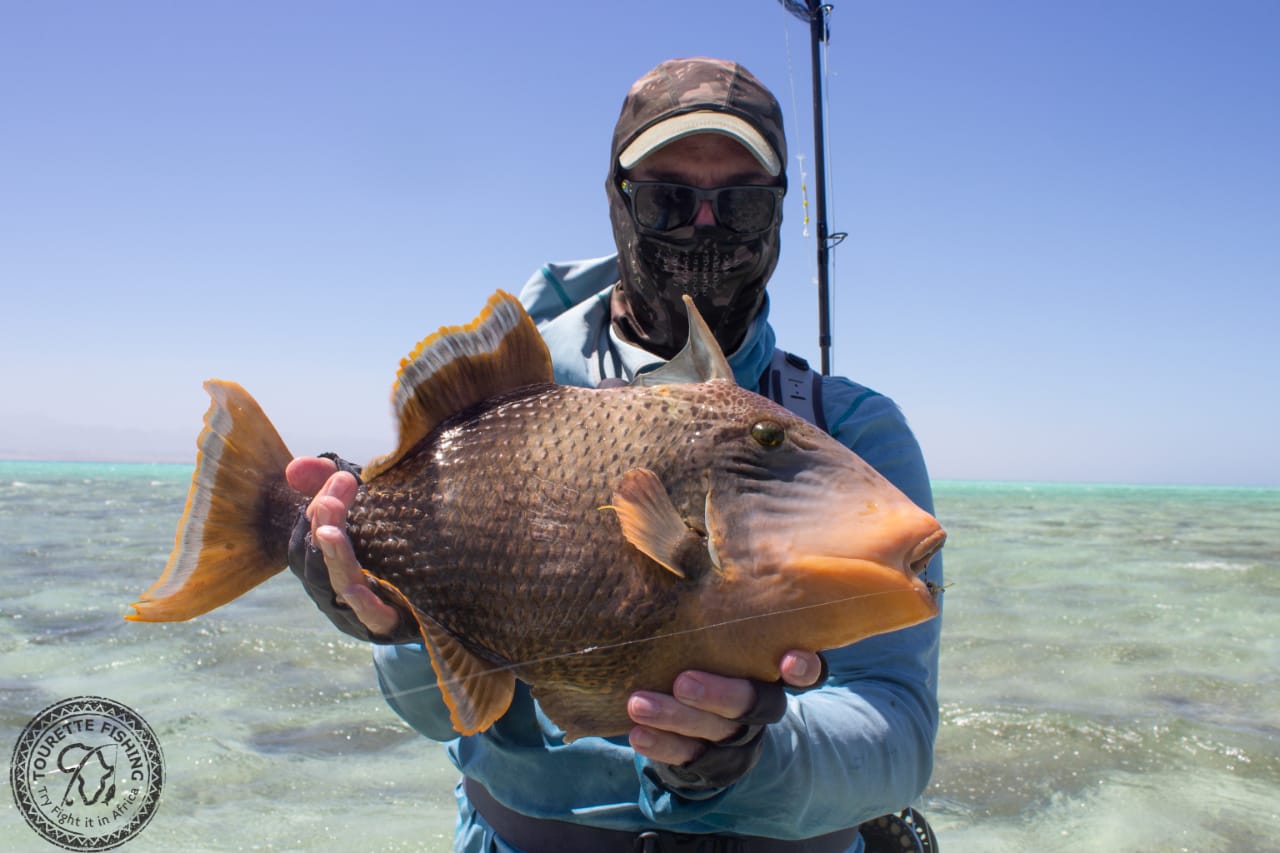 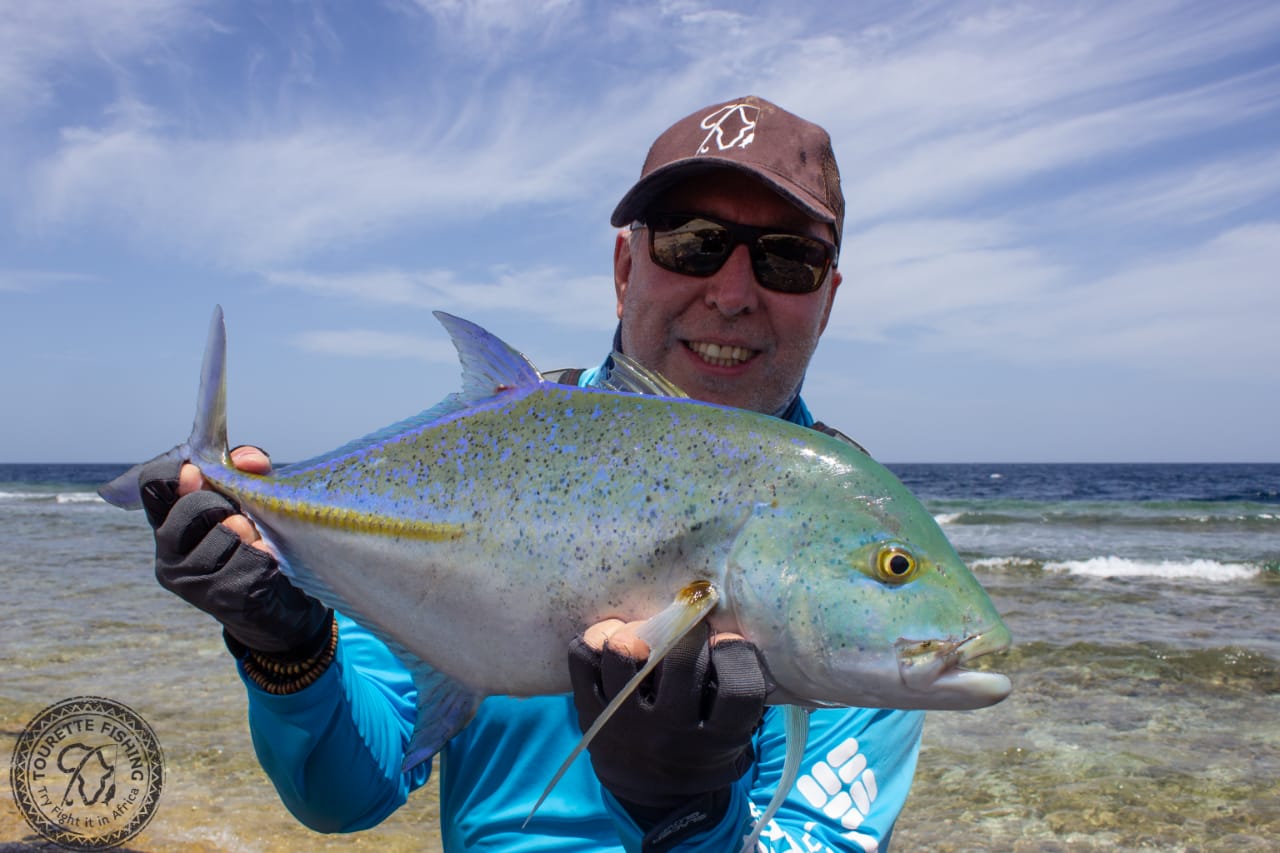 One of the many Bluefin Trevally landed doing the week.
PrevNext