So after Yesterday’s boxing match all of us woke a little battered and bruised I must say. Plus the ever increasing wind is not really helping the cause either! So far this has been the strongest the wind has been the last three days and it’s really not looking like it’s about to die down anytime soon!

Anyways, wind is unfortunately one of those things we don’t have any control over so chin up I guess and carry on with the job at hand!

So today we headed way south with the skiffs to go check at an area right up against the mainland. On the maps we have, it really looked promising plus there is a group of islands real close to this mainland which we also had a look at but more on that a little later!

The motor down south on the skiffs were no joke, sherbet! With all the wind and the nature of the ocean bottom we crossed, it made for some real hairy swell! As you go over one swell you will get smashed from the right and then from the left and then from the front again. All of us were soaking wet and Im sure some of us slipped some discs in our backs but hey, thats what us fly fisherman do to get to good water right?

I must say, approaching the mainland was special! On the horizon as we came closer, we saw these massive red dunes with a little bit of growth on it and that was it! Nothing else! It really had this eary feeling about it. Like this almost moon like landscape. 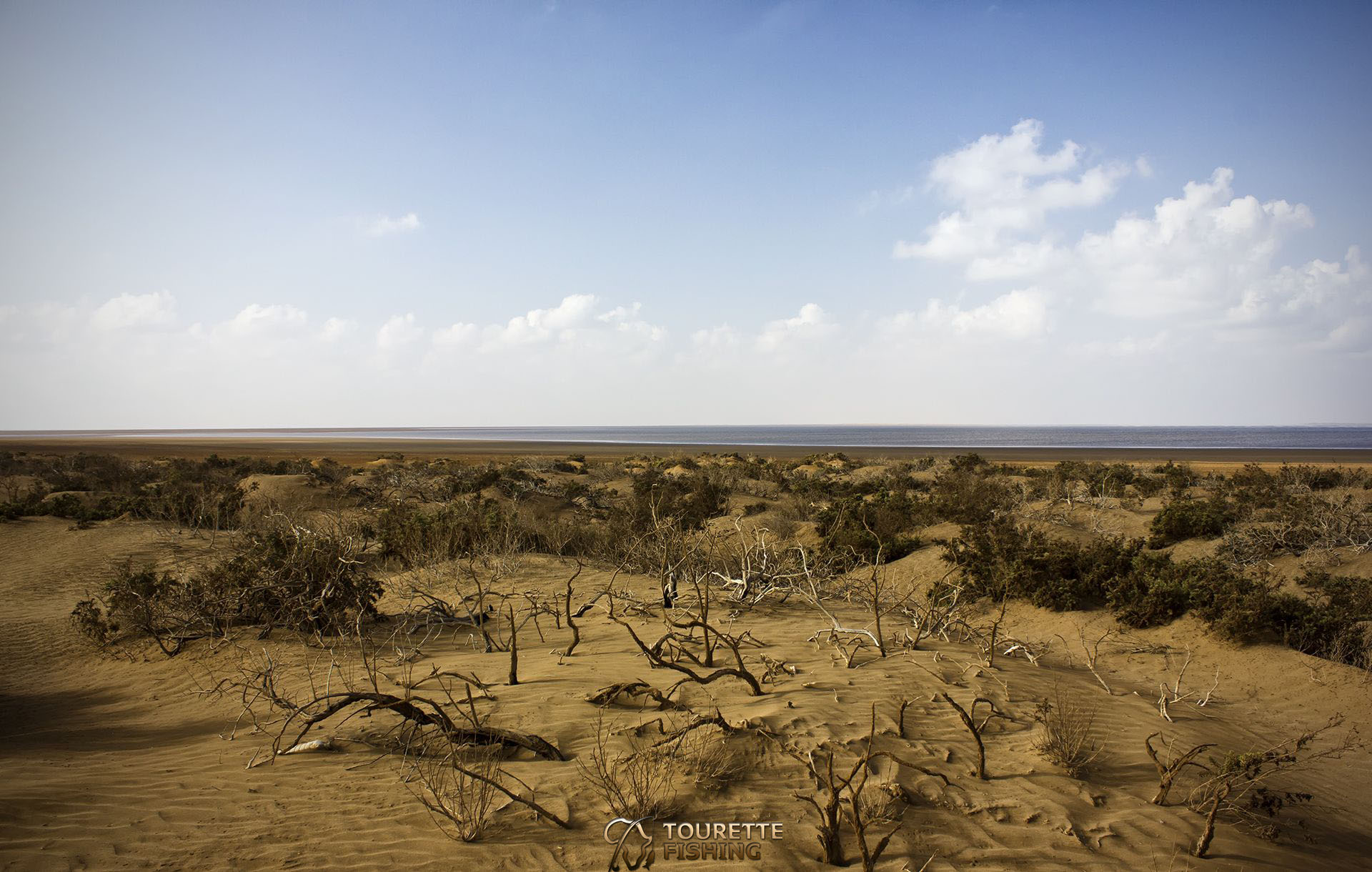 How cool is this? In the middle of nowhere

When we got to the mainland, of course we raced like little boys up the dunes to see who got to the top first but wow what a surprise when we finally got to the top! We discovered this huge body of water right in the middle of nowhere. This was super special. I just sat there for a couple of minutes and took all of it in. To me its things like this that really adds value to a trip! Fishing really takes you to some amazing places thats for sure.

Ok on to the fishing!

Unfortunately all this wind made for really bad visibility on this flat. The water really looked like Milo which made sight fishing impossible! Luckily though the “milo” water stopped on the edge of the flat, so all of us decided to wade right to the edge and just walk it anyway!

We didn’t see much, but this flat really had potential! It had a good mix of coral, gravel and sand. With the low visibility we stumbled across some trigger fish but by the time we got to see them they were within 1m of us and ready to book out. Kyle managed to catch a small GT blind fishing in the dirty water and myself some small emperors etc but nothing major.

One hour into our walk we pulled the plug and headed for the little islands with the hope of cleaner water! 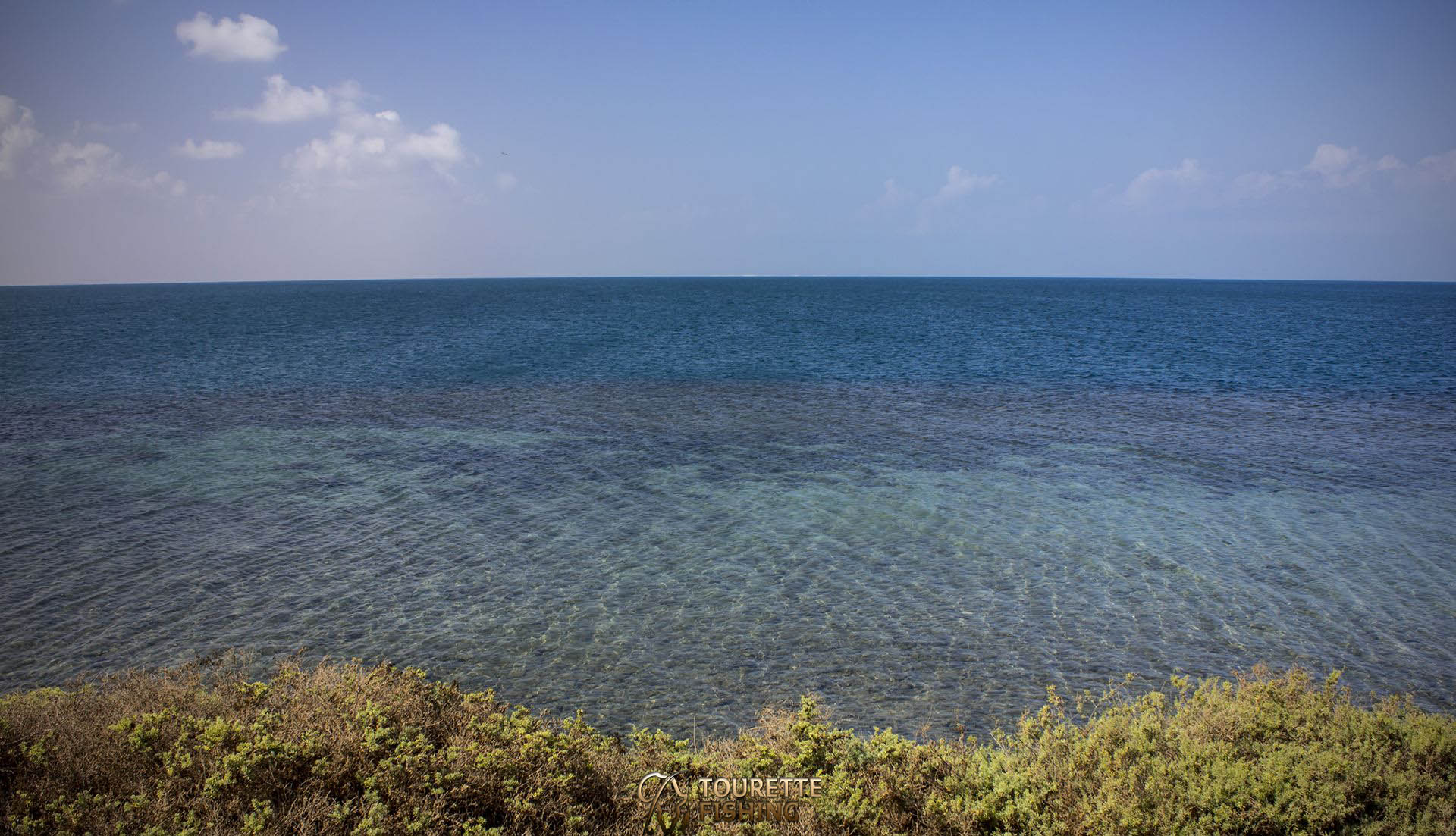 The water around the one little islands

The islands had clean water with some good fish activity! Rob bumped a big Geet on the flat, and there were a couple of tailing triggers. We also managed some small bluefin’s on tease of the edge and I sight fished to some malabar rock cods, and Nicola landed a small Napoleon. I spent some time walking around on these little islands and it was quite special. Saw some awesome birds and signs of snakes plus loads of the most interesting shells. It was so beautiful.

The photos just don’t do it any justice!

We retreated for an early lunch and after a quick discussion we split up again and headed for the flats we fished Yesterday.

This time round myself and Kyle teamed up with Ed Truter and headed to the infamous Milkylane, while the other guys headed to a flat close by. Again as we came onto the flat we saw big numbers of rays mudding and digging around. This got us exited again and it was not long before we saw our first GT! It spooked a little but Ed instantly grabbed the teasing stick to try and get it to come closer. We lost sight of it briefly but three winds on the tease got the GT so excited and red hot that it smashed the teaser in the most spectacular fashion!! 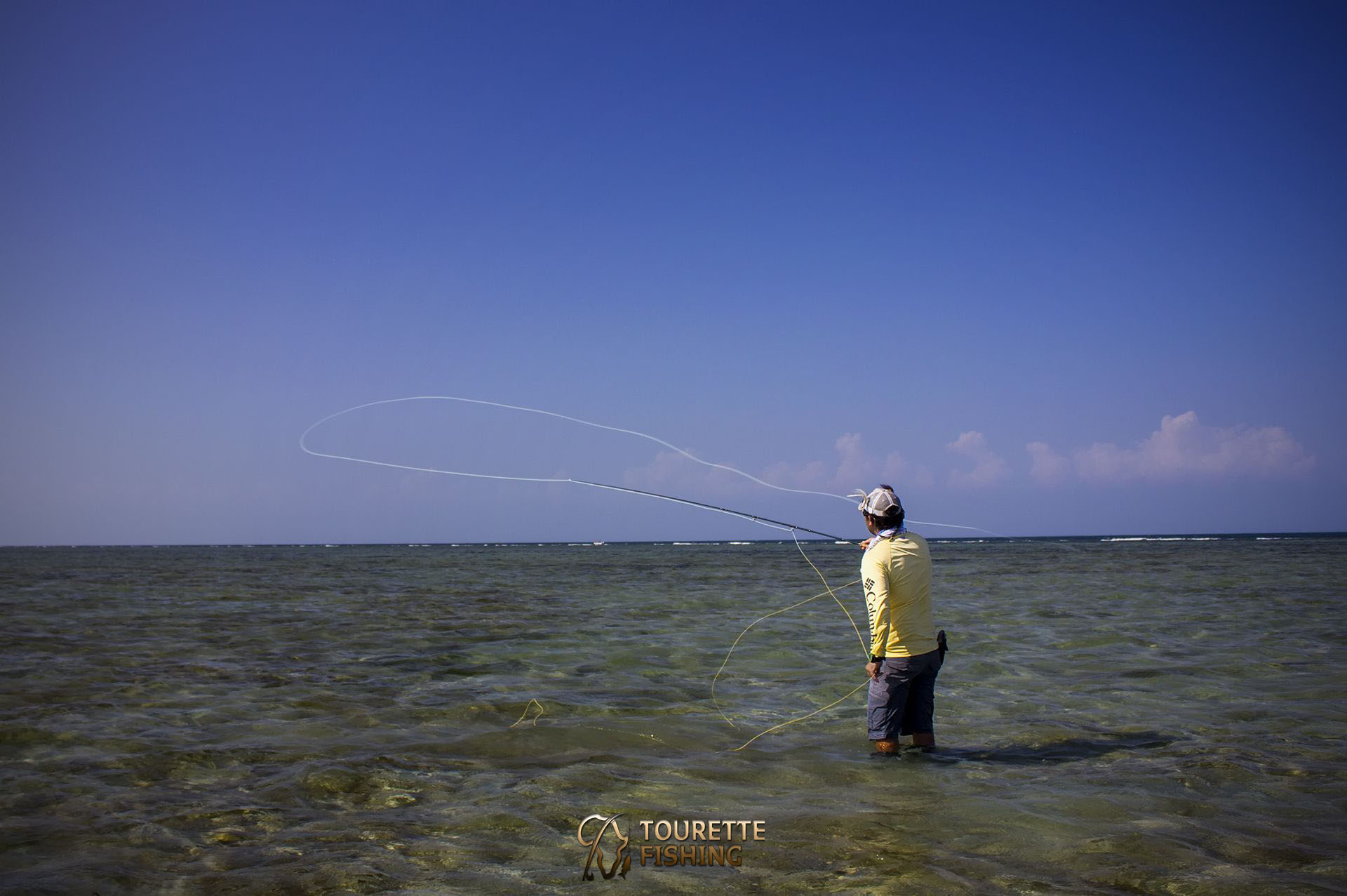 Kyle Reed cast at some Milkfish at the infamous Milkylane

Game over but what a great laugh.

We carried on and not long after Kyle shouted at us to stop! The I saw it, “ED your 10 o’clock, dark shape 15m coming straight at you!”. Ed got his 12wt ready and loaded but then the shape went left before making another U-turn. MILKFISH! After telling Ed about the milkfish we saw yesterday, he tied some “R&D patterns” as he calls them, and were amped to try them out.

So he got his 9wt ready and we carried on walking. We came across another shoal of about 10 fish, all in the “extremely big” size! We tried to present to them but their movement is so erratic that it almost makes it impossible to predict a direction they will go in. At one stage we were completely surrounded by milkfish. Everywhere you looked, it was just these long dark shapes moving around for some unknown reason. To the untrained eye they would almost look like a massive school of sharks.

We carried on walking but no GT. Just milkfish with zero appetite everywhere. 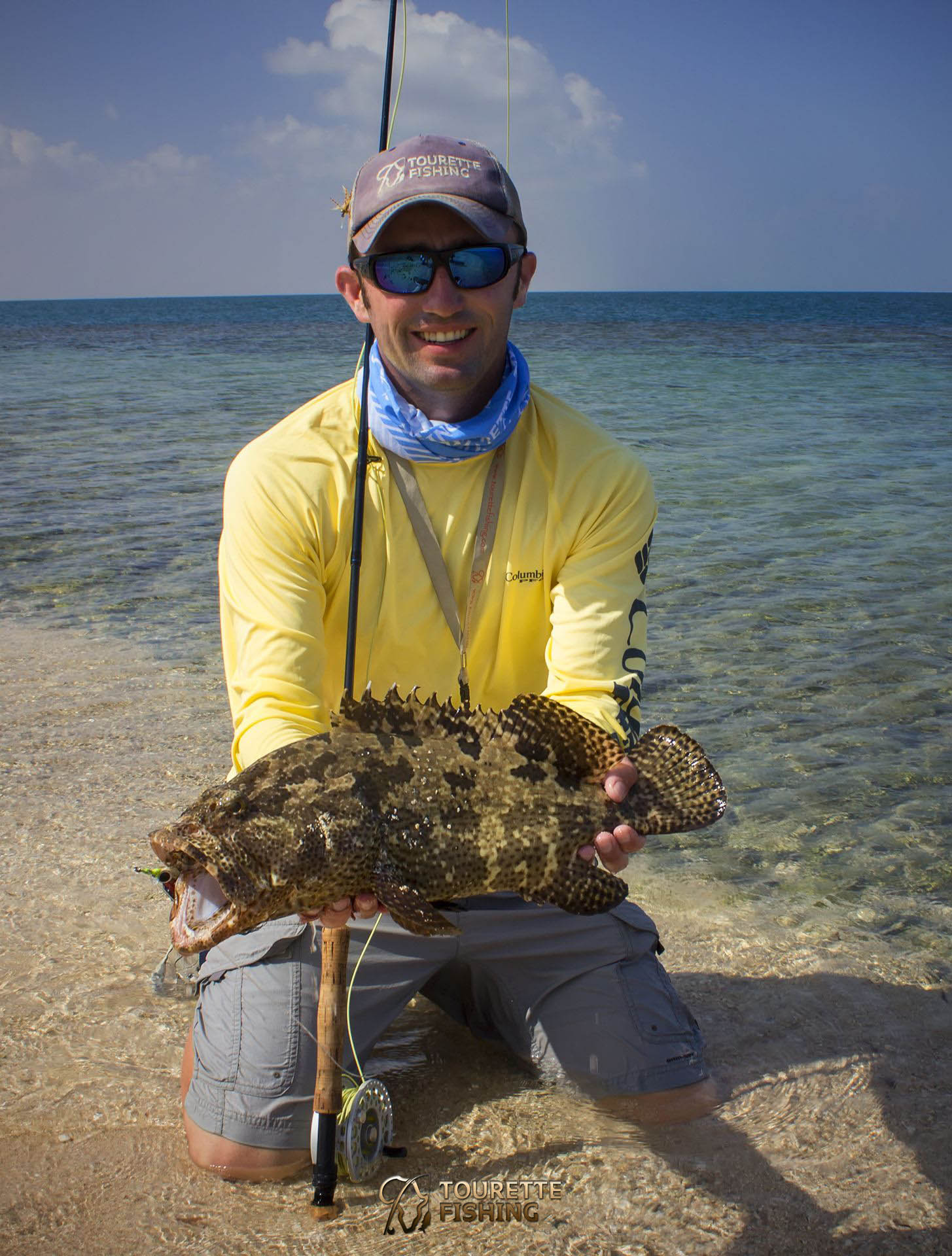 One of a few Malabar Rockod caught today

Just before we had to head back to the mothership we stopped on one more flat and just drifted it with the boat. We saw some fish that looked like small bonefish in the distance so myself and Kyle hopped off the boat to go and investigate it.

As we approached these UFO’s or Unidentified Fishy Objects, some movement to my left caught my attention. I stopped, had another look and then I saw the tip of the tail come out the water, GT! I shouted to Kyle and he came over instantly. This fish never saw us but was moving across the flat with a little pace. Now this was the part I really enjoyed, because Kyle just went into full on guiding mode. Giving instructions and I just followed them right to the tee.

We followed this fish for quite a while to try and get a little ahead of him so we could present but this fish was not handing out any presents thats for sure. “Ok Mark, the fish is turning, start loading your cast!” Kyle instructed. “Your 2 o’clock quickly, put down the cast! Thats good ok Strip!”. I started stripping and the fish came in glowing hot and ready to kill my fly!! It followed and followed and then just turned away – why we have got no Idea. It didn’t spook as it just turned away and moved off. We followed it again for quite a distance until it finally swam off the flat without presenting us with another opportunity. Weird, but it certainly had given us plenty of entertainment, and kept our heart rates sky high for quiet some time.

That was it for us and we called it a day and headed back to base.

Ewan and Rob had some interesting results as they teased the entire afternoon. 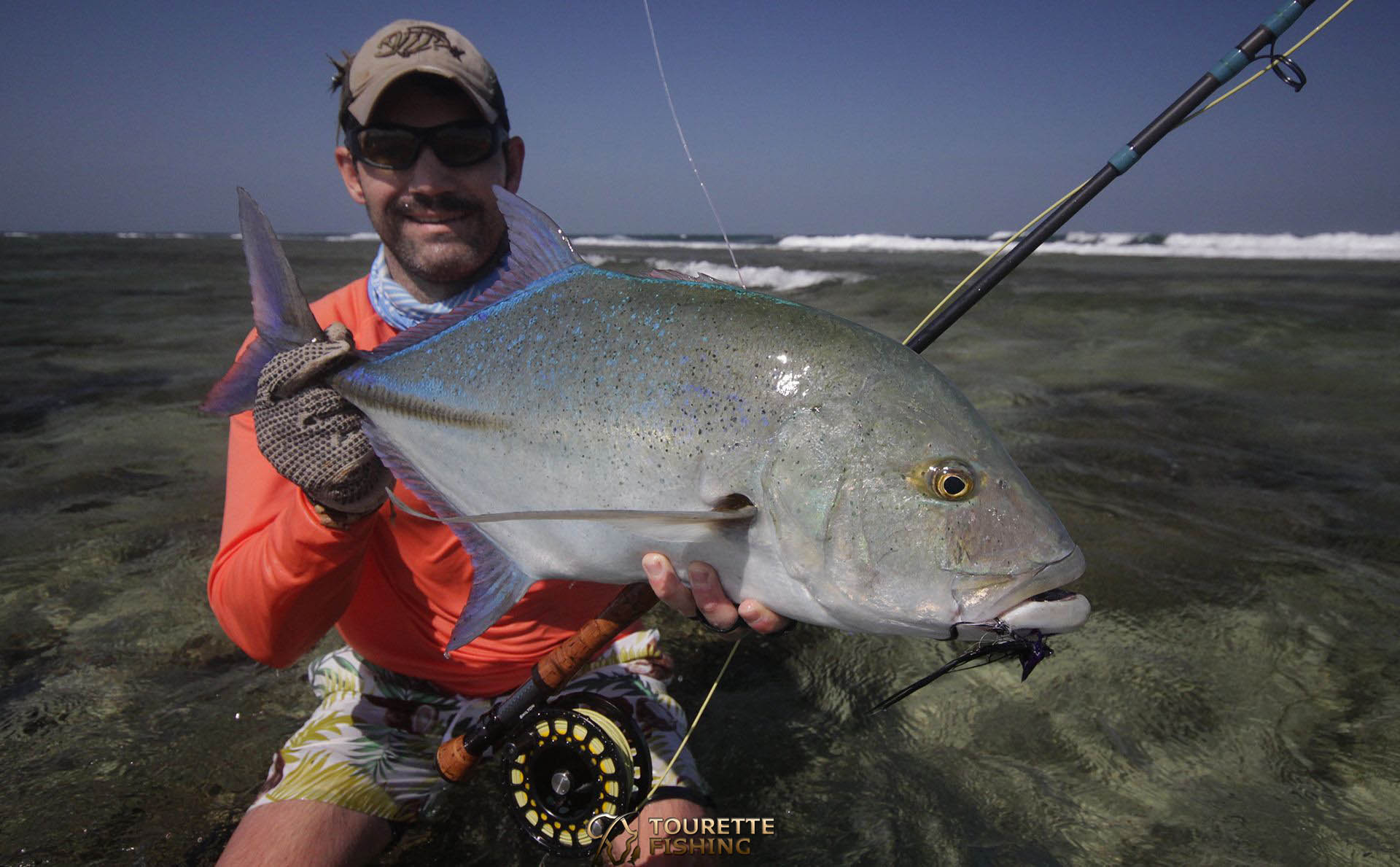 Ewan Naude has really been tucking into the Bluefin Kingfish today

Ewan landed a brute Bluefin, a few Bohar, and some good Barracuda and after a good tussle came home with only half a fly line after a BIG Geet decided to show him some reef! Apparently they had a few good shots at GTs, and the entire afternoon was action packed. The weather made things difficult for us today but there was still plenty opportunity for some epic fishing, Ewan is certainly buzzing after his afternoon.

Anyways I’m about to go have a cup of Tea and some nutella covered biscuits with Ed before shuteye.

From the Red Sea, keep well and lets hope King Neptune smiles on us tomorrow