Boy what a day! We are completely broken but what a day. We got beaten up so badly it’s not even funny. Dammit it was fun.

We had a little earlier start this morning as the mothership is now docked right in the middle of the area we want to explore. So after yet another amazing breakfast, must say I’m really getting the hang of Nutella and pancakes for breakfast, we strapped on our wading boots and headed out.

The plan for the day was very similar to Yesterday, I would fish again with Rob and Kyle, hopping off on the northern side of our pre planned flat and then walk across it and then tease off the deeper outer edge. 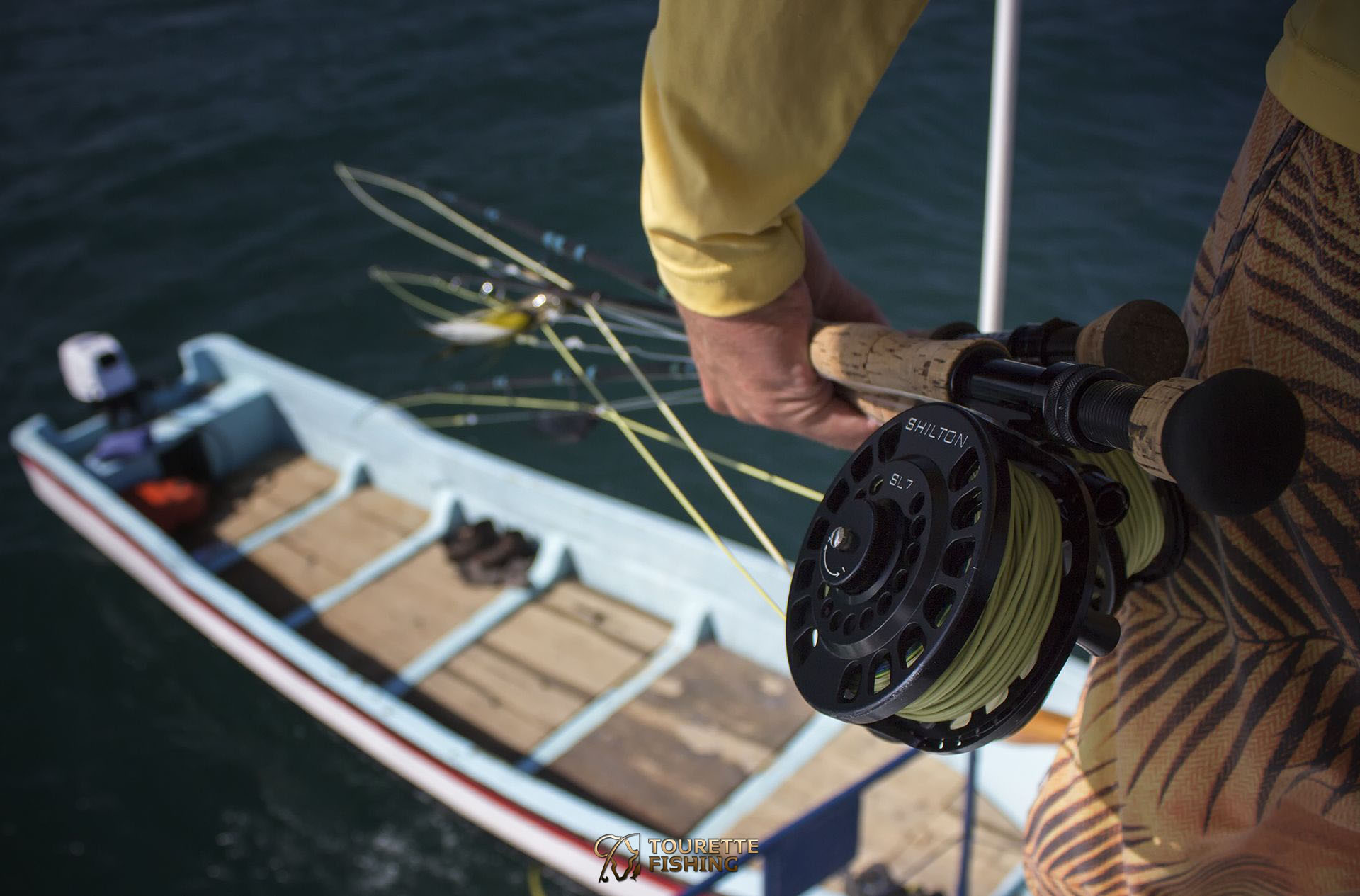 This time round as we approached the flat, we didn’t see any GT’s move off the flat like yesterday but one thing was for sure, the wind is definitely picking up.

It never died down during the night but this morning it’s definitely a tad stronger.

The flat we fished today was a lot different to Yesterday. The best way to describe it would be to divide the flat into thirds. So where we hopped off the skiff in the first third if you like, it was about waist deep for me and just plain sand but the water a little murky.

Then as you get to the middle third it shallowed out to about mid shin depth but lot more weed and almost like a more slight orangey yellow glow to it but looked so fishy. This third really reminded me of some of the estuaries I’ve fished back home.

Then when you get to the final third, it gets a little deeper, the water gets super clean but with a lot more grass but what was clearly notable was the fact that the final third of the flat, the water was quite warmer compared to the rest! It also had a coral edge like the flat we fished yesterday.

Ok so now that you have an idea lets carry on.

We spread out again to cover more water. We noticed a lot of rays mudding in this first third which might be the reason for the murky color! This got us three really excited as GT’s really enjoy sitting on top of rays using them as cover!

It was not long before Rob came to a complete halt and started stripping line of his 9 weight and said “Permit, his 11o’clock, 15m!” Both me and Kyle had a look and saw the dark shape! It was so difficult to ID it as the choppy, murky water did not help our cause at all. We lost sight of it briefly then from the left we saw a shape again but this time round we knew what this was, GT!

Rob dropped his 9wt immediately, got his 12 ready and presented his Black & Purple Semper. As the fly hit the water that GT started glowing and was red hot! It devoured his fly 4m in front of us, heart racing stuff, and took off!! That fish did not hang around but not long into its first run it spat the fly. We just stood there dumbstruck, how on earth did that come off?? To this day that will remain a mystery but I guess thats fishing right??

So we carried on and this is where it really got interesting! While walking in the shallower water in the middle of the flat, I saw a big black shape coming straight at me! I got my 12wt ready, presented the fly to this shape but nothing. It carried on coming straight at me and when it finally turned away literally 2m in front of me, I saw it was a huge milkfish!! The size of a submarine.

Next moment Kyle got excited as well, I saw him casting and stripping ferociously but nothing. This went on for about two hours! We were completely surround by power milkfish that could not give a rats ass at anything we presented to them. Honestly, I don’t think we saw a single milkfish less than 20kg! Weird thing though, we have no idea why they are on than flat, its not like they feeding on algae or something and they were so erratic making it almost impossible to present to them. After a good effort we gave up and carried on. 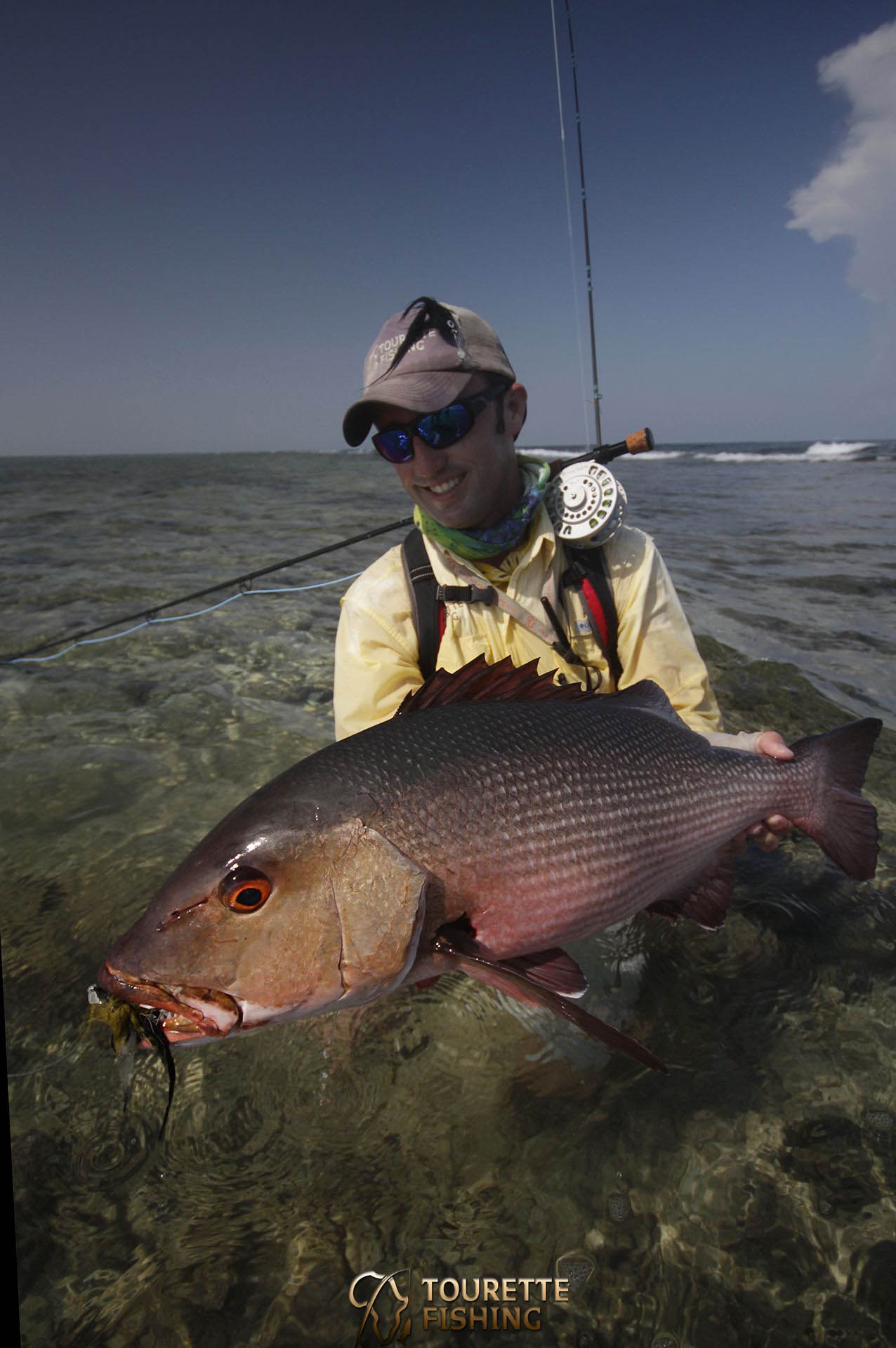 Super stoked with my Bohar snapper!

We teased a bit off the edge right before lunch and I managed to get a really nice Bohar snapper and Kyle got a couple Bluefin kingfish but nothing crazy like yesterday!

Anyways the other guys met up with us for lunch. They had a better morning teasing off the edge! Both Ewan and Sven got apparently man handled by some good sized GT’s but managed to land a good a number of bluefin kingfish, barracuda and bohar’s

So after lunch Myself and Rob took the skiff to a small island just off the flat we walked this morning, to go and tease off the rocky points while the rest of the guys re walked that same flat from now on know as “The Milkylane”

Now this island must be some of the most uncomfortable terrain I have ever walked on! Holy cow, a mix of coral, reef and pebbles with pounding waves and a stiff breeze made for some very sore feet at the end of the day, let alone scrapes and bruises. But through all of this, both me and Rob just had this feeling that something was going to go down here. We did 5 teases then moved another 50m or so then repeat. We got a couple small bluefins to come in but not overly aggressive, they would just nip at the fly but not commit.

The fourth time we moved, I just heard Rob shout out loud “GT, BUS GT, your ten o’clock, GT!!!!”. Damn I’ve never heard the man get that excited but when I saw the GT, I knew exactly why he was. About 50m off swam one of the biggest GT’s I have ever seen. Rob reckoned nothing less than 40kg. Just hanging below the surface cruising slowly looking for its next victim!

I instantly developed a slight case of “buck fever” but I knew now was the moment of truth! So I got into position, had everything ready then Rob just looked at me and nodded, I knew it was game time!

He put the teaser out and started bringing it back towards me, my heart was pounding like it was trying to break out of my chest, the Geet immediately turned towards the teaser, followed it and then it just disappeared! We had no clue where it had gone but Rob carried on winding the teaser towards me. I started loading my cast as it came closer, 30m, 25m, 20m, I waited…at 15m I put my fly right behind the teaser but we still didn’t see the fish. I started stripping big time. I still remember stripping the fly down this small little wave when out of nowhere that fish launched half of its body out the water and absolutely annihilated my semper!! 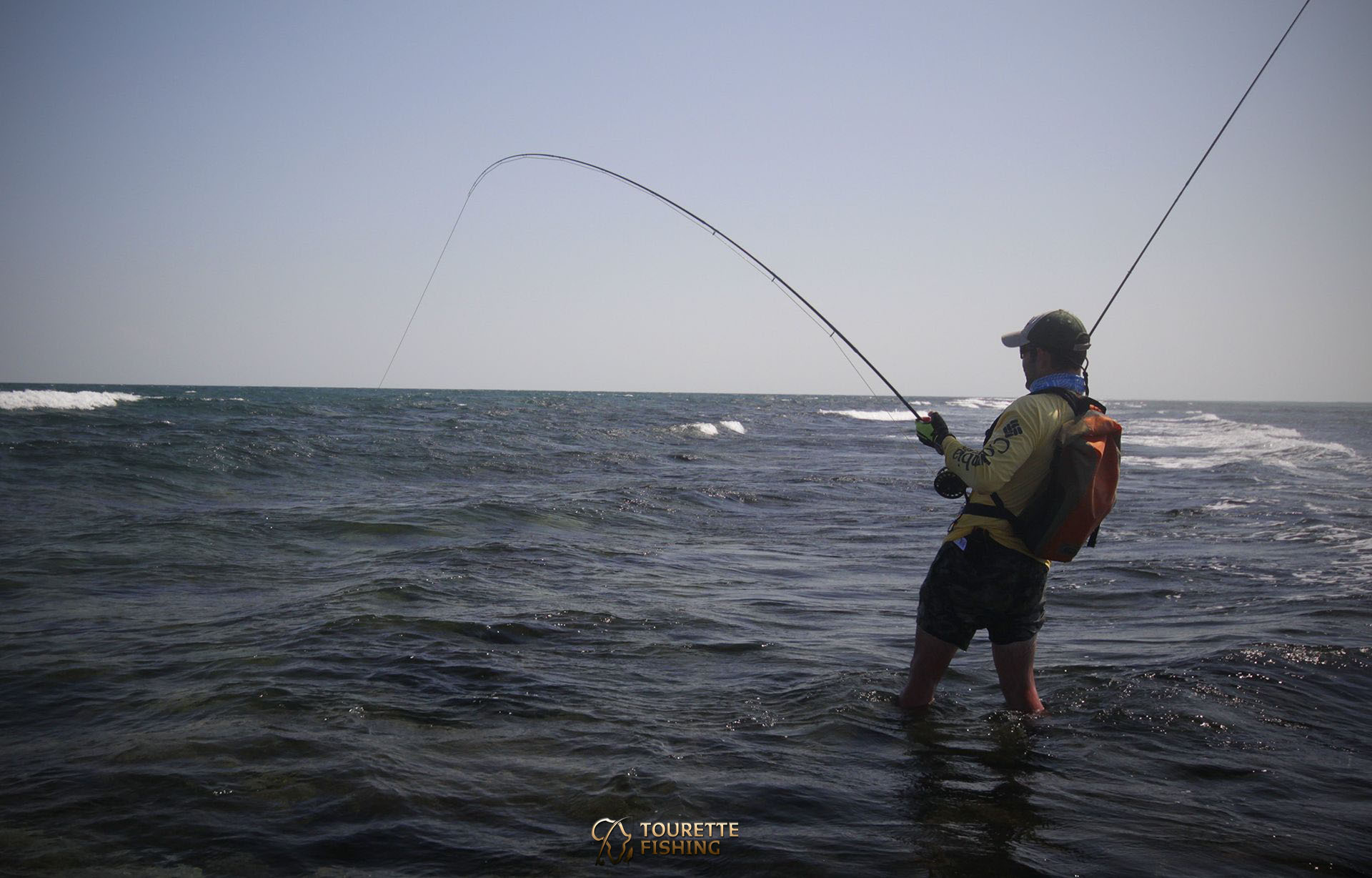 Ewan Naude into another Bluefin Kingfish

My heart almost stopped, everything felt like it was in slow motion. I gripped the line, gave a step backwards and laid down the law! That fish took off so quickly, it was actually frightening! I knew that now I better bring my A-game to the table or get the hiding of my life. I put some good pressure on it and just watched my backing knot disappear into the waves. I was a little cautious with all the coral around but not so much so that he was having his way with me.

Rob ran to the little rocky island behind me in the meantime, dropped his bag and rods etc(in the process breaking the teasing rods tip) and came back straight away to assist! I started gaining line and after a little tug of war my fly line re appeared. I started gaining confidence as did Rob! “ you’ve got this boet, just take your time” he kept reassuring me! The fish took some line again then I would gain it back. I really started to think that shit, Mark’s got this! 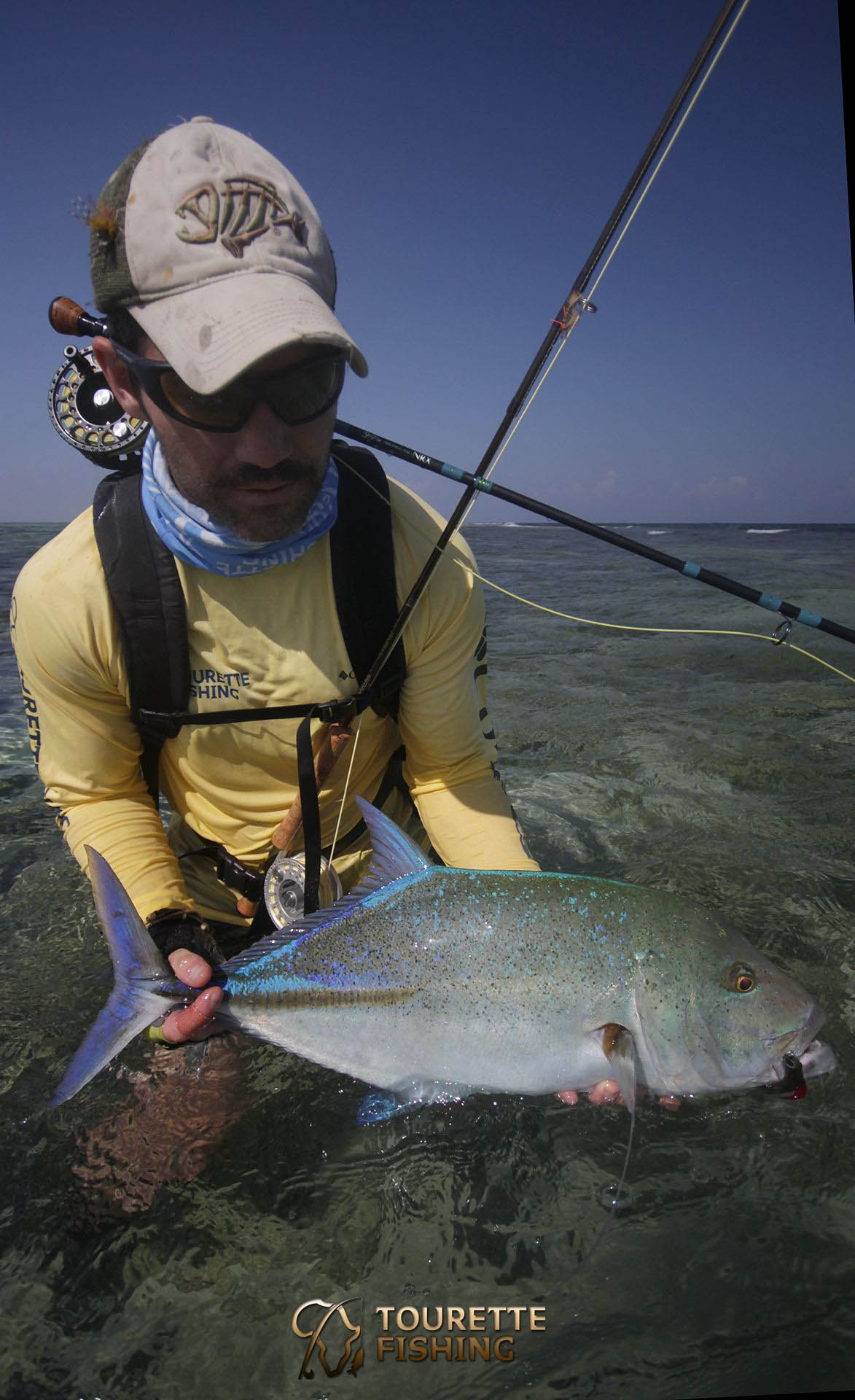 Ewan Naude styling with yet another Bluefin Kingfish

Rob moved a little closer into the water and the fish took off a little again when out of nowhere, I could feel a little chafing! Before I could release the drag he managed to cut me off. We just stood there, not knowing what to say. Then I don’t know why, we both just started laughing! I think both of us realized that we just got owned by one the Red Sea’s giants!! What a privilege. I mean it would have been awesome to land that fish and get the photo but just the privilege to have been able to see him devour that fly and feel the power, mind blowing! We came so close but hey, you win some you lose right? Thats what makes us came back over and over I guess.

We made a couple more teases after a quick repair on our teasing rod, then decided to head back to the mothership to regroup and watch the sun go down while we sipped on some ice cold locals beers.

The other guys had some luck as Ed Truter got a young GT that was cruising on a ray while the guys were surrounded by those power milkfish again. Kyle came across some Bumphead Parrotfish as well but never got a shot at them.

Thats it for now from me, I’m super poked and about to head to bed, which by the way, is outside right at the top of the boat under the star lit sky.

Ciao from the Red Sea