It takes a driven man to return to Lesotho with his wife and little boy in order to chase a Bokong Brown in the short space of three nights. Stu Rawlinson was that man. He was part of the first group of the season and it was a great trip except for the illusion of his Brown.

He managed a good number of yellows and a couple of rainbows and even brought a Brown up to his dry but luck was not on his side then but he was hoping to change that. in his second Lesotho trip for the year.

We all knew that the best chance of a nice Brown was up river and that meant a 14km hike with his wife and young son on his back, and let me say that I carried him for a couple of kilometers and it was not a easy task so HUGE respect for Stu, clearly this fish meant a lot to him.

The first afternoon, we saw a few big fish but couldn’t get one to eat. That night was the first night Jeannine and Stu’s boy, Dom, had ever spent in a tent. This was a bit of an experience, considering that we woke to a massive electrical storm in the morning. Both Humus and I were dreading that all the effort to get everyone up was going to be ruined but

fortunately for everyone, this was not the case as the storm cleared and the Bokong stayed in immaculate condition, boasting healthy flow and crystal clear water. No excuses rose to landing a Bokong Brown!

After some French Toast, made with freshly baked bread and cooked on a cast iron pot, which was quickly nicknamed Lesotho toast, all five of us headed off in search of a Brown. We came across a pool that seemed too small to hold a good fish but out of no where a pair of Browns were spotted chasing off a Yellow. The bigger brown was very on edge and ended up forcing the smaller brown to the tail-out of the pool. After a shot at the bigger fish which did not produce an eat, we switched our attention else where.

The other fish was now spotted sitting in the last meter before the rapid dropped off. Humus and I were perched on a cliff with a good visual advantage, guiding Stu into what we believed was a nice sized brown. A well placed dry, brought the fish up but didn’t produce an eat. After another drift, which caused no movement from the fish, we changed to an unweighted pheasant tailed nymph. First cast and this Brown lit up, even chased it down the rapid. BOOM! Stu reacted after seeing the white mouth open at him and a shout of strike from the cliff saw the much anticipated bend in the rod!

After a rolling fight, the fish was netted and cheers could be heard echoing through the valley. With his wife and boy there to enjoy the moment, it couldn’t have been much sweeter. A very special fish after a very tough trekking season. Team work paid off in the end. 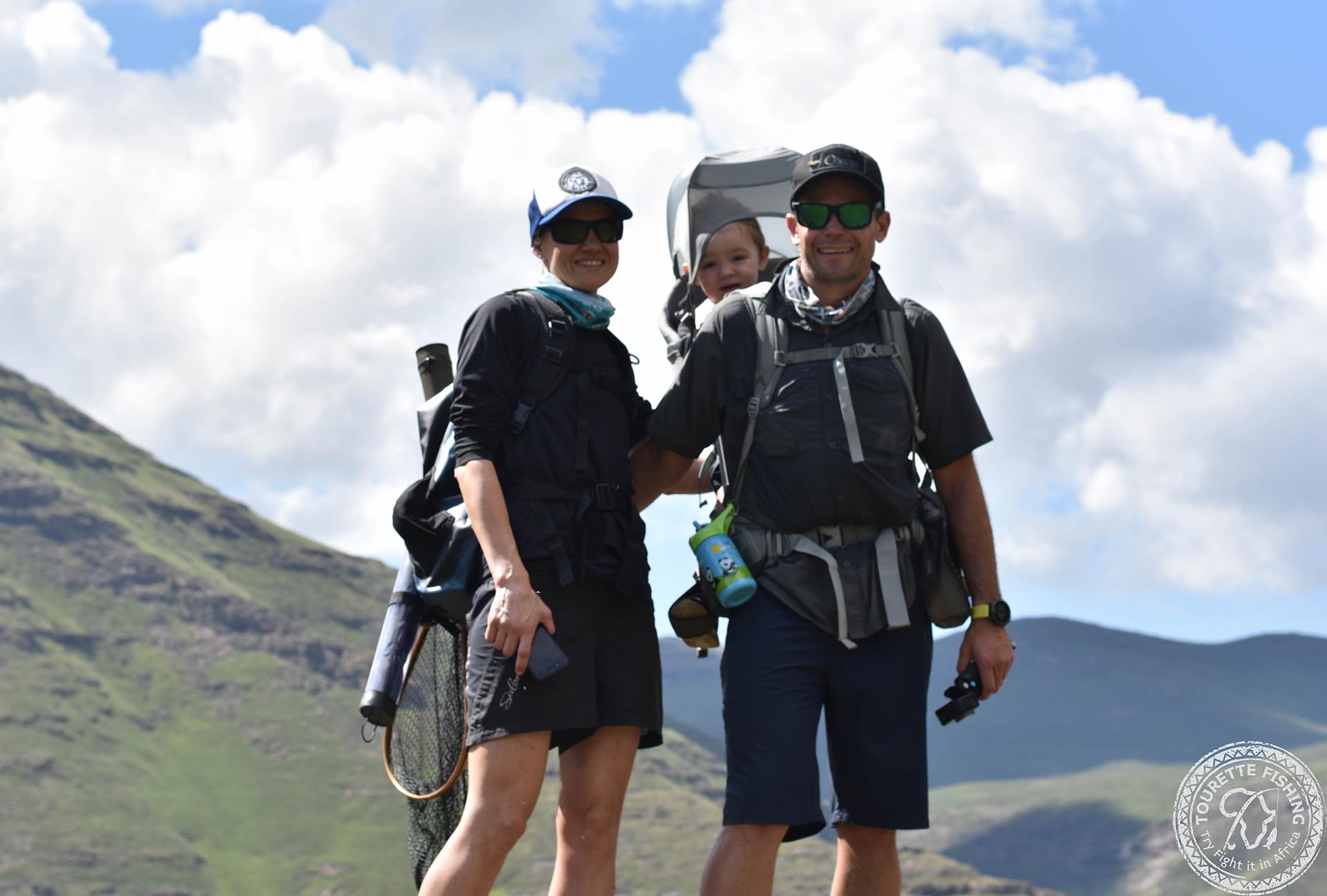 The Rawlinson clan , high up in the Maluti Mountains chasing the brown trout dream. 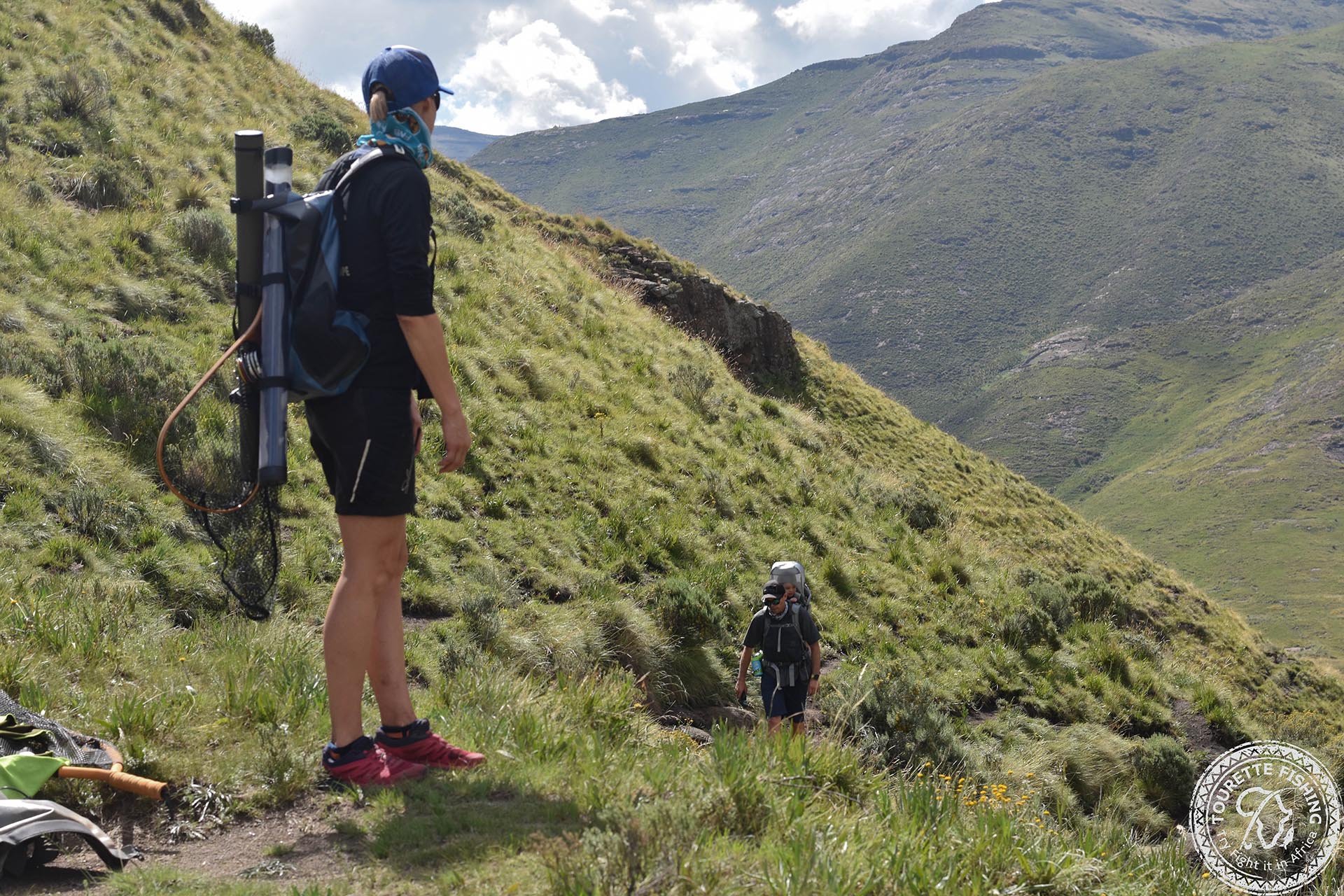 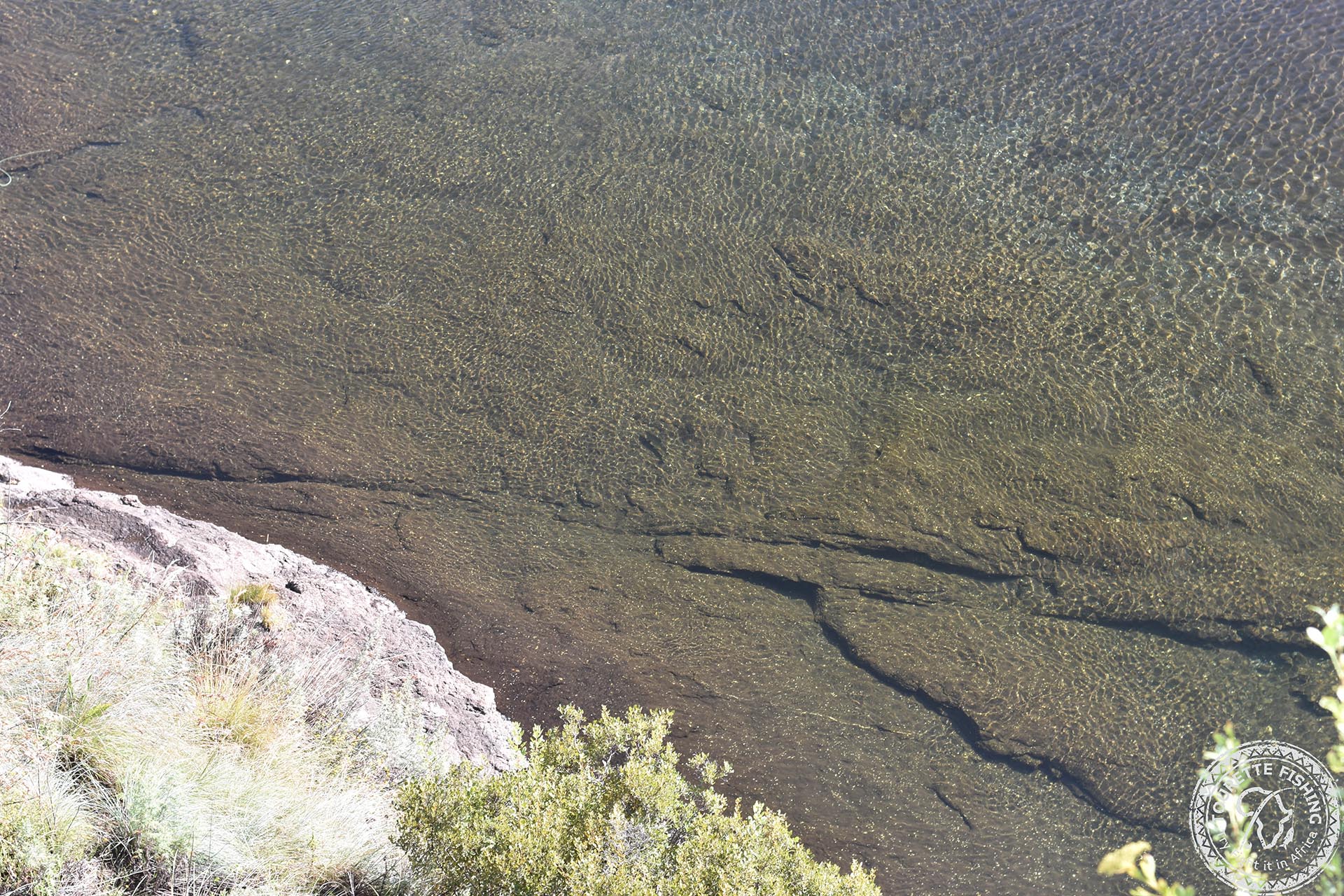 One of many brown trout spotted throughout the trek. 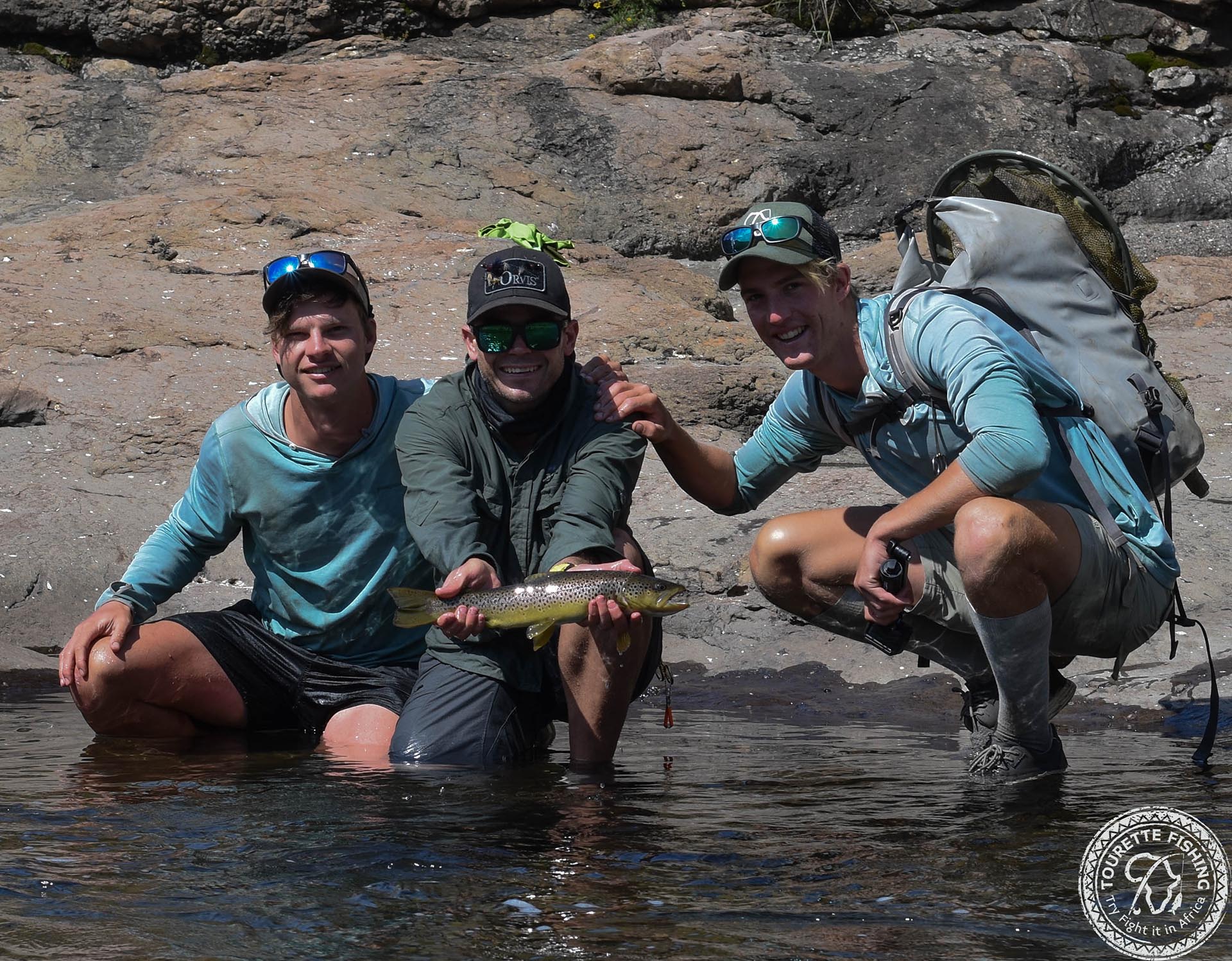 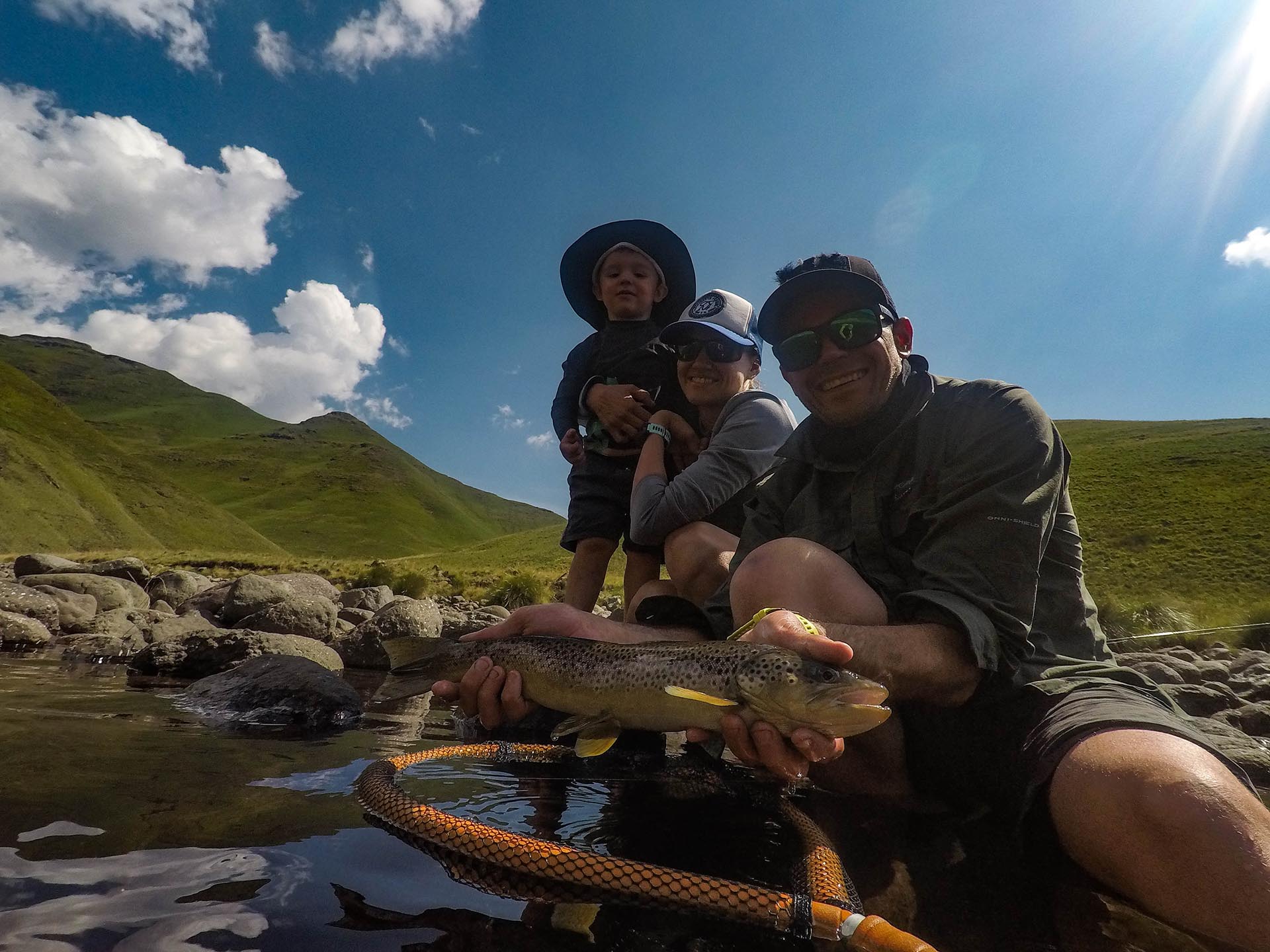 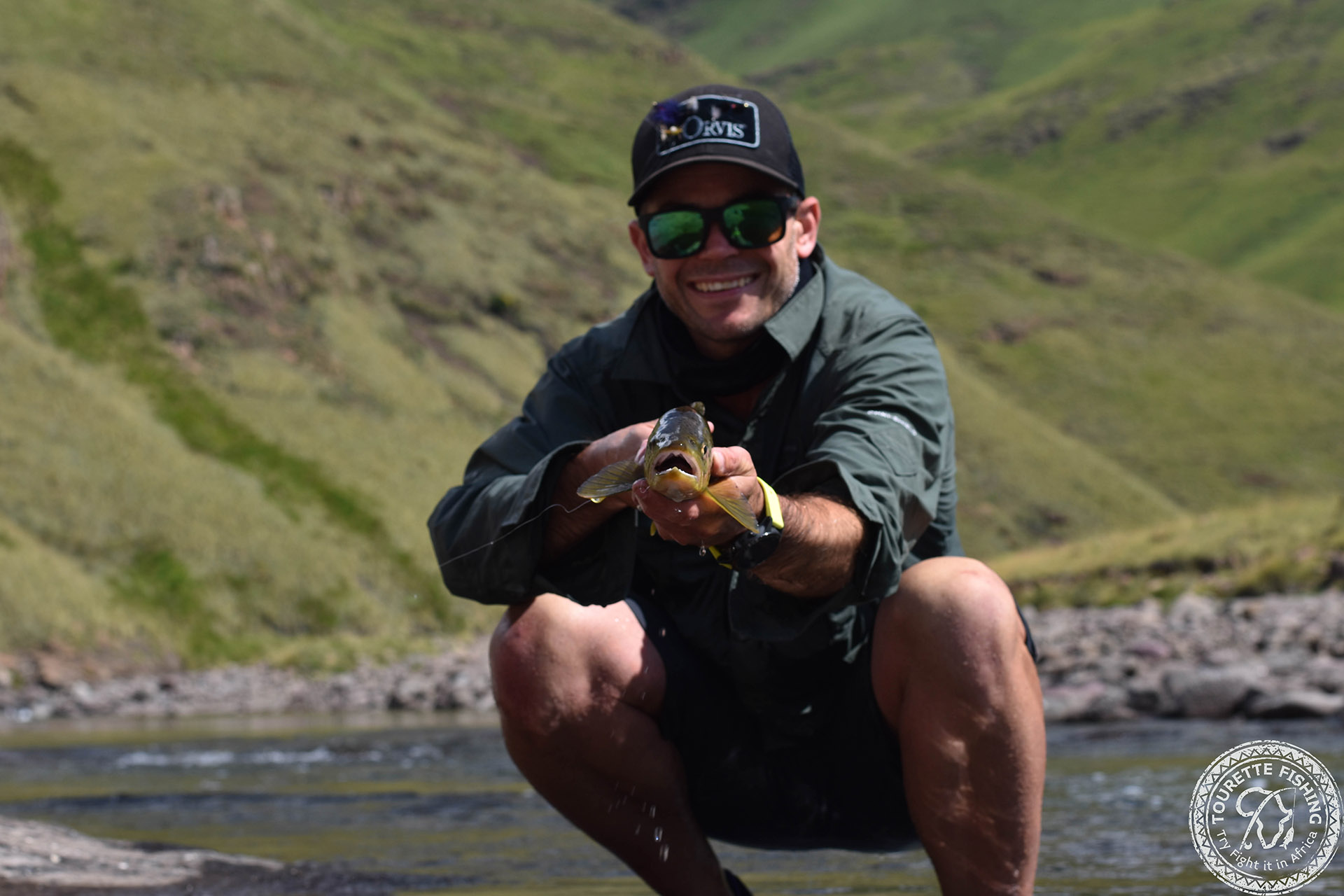 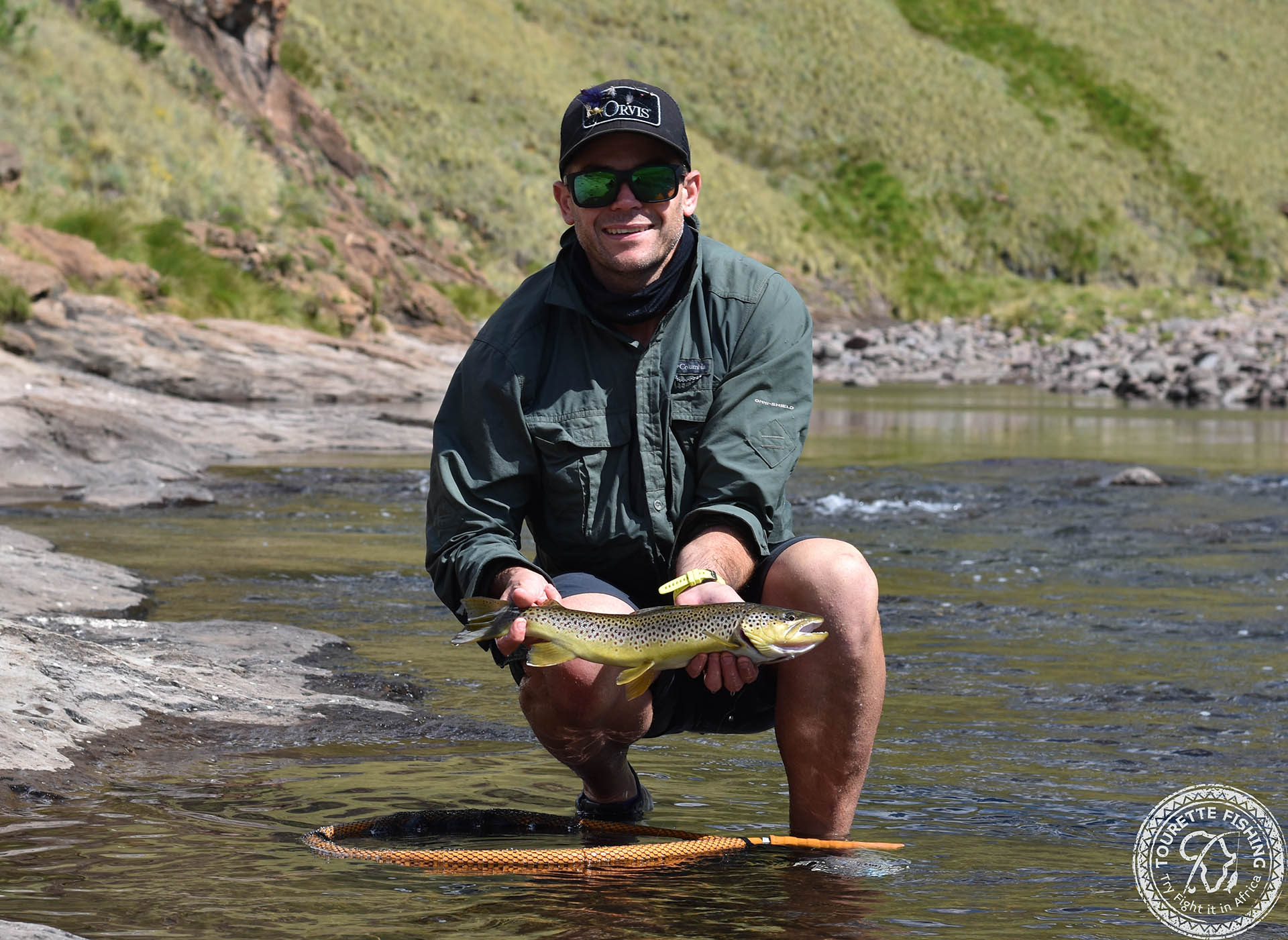