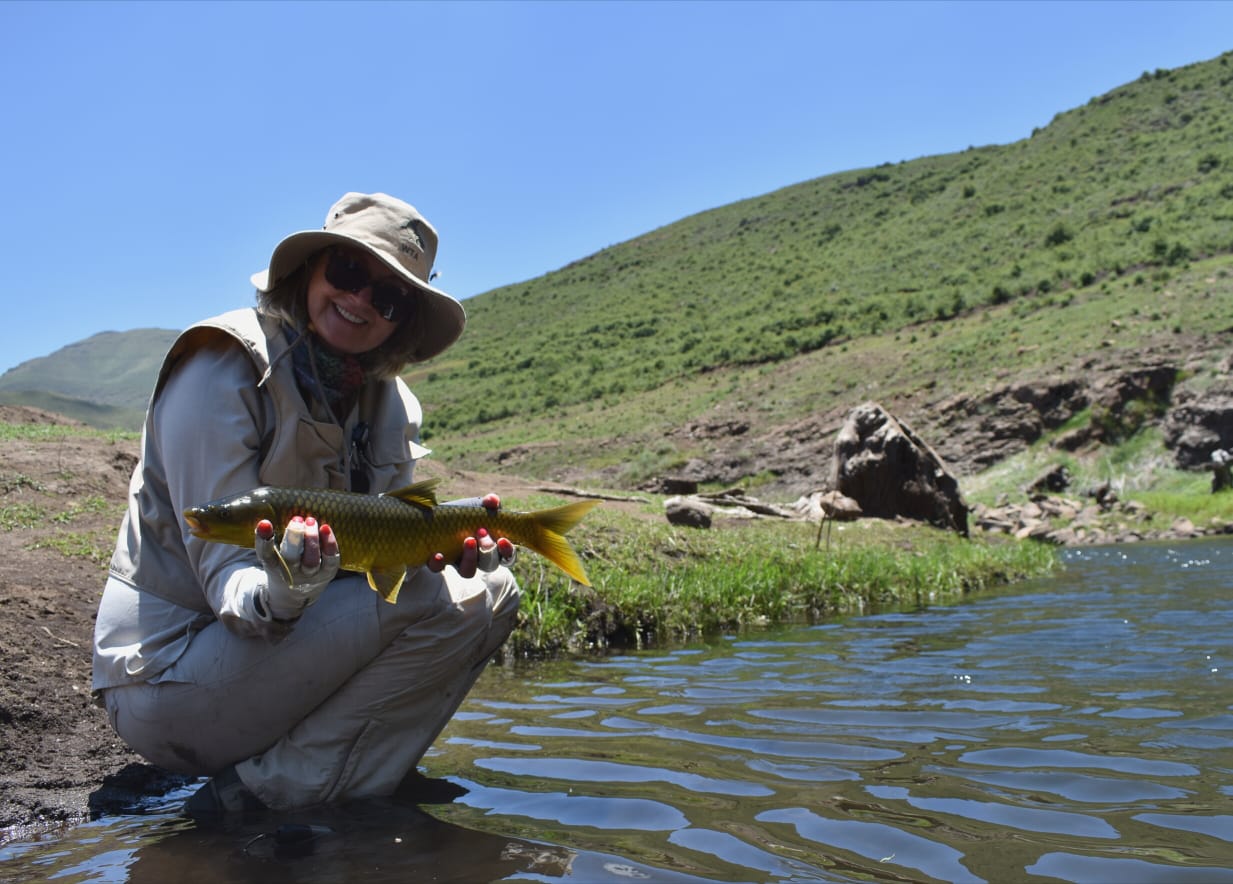 Veronica and one of the 4 yellows she landed in the first session – first time fly fishing!

The last week before the Christmas break saw the arrival of two groups, firstly, John, Pete as well as mother and son combination Veronica and Mike. Although a few were still green to the fly fishing side, the anticipation of hungry yellows got everyone very excited.

The first session saw us head down to beat zero as a large amount of fish had been seen entering the river earlier in the week.

Veronica had only ever chanced her arm at Rhodes and was yet to get a fish under her belt, that changed in a very drastic manner with her picking up 4 yellows in the morning session by sitting at the tailout of a pool and casting at fresh fish that had come up the rapid. Everyone had a great start and got some yellows, notably Mike picking up 7 yellows, John catching a lovely sized rainbow and Pete picking up a brown trout.

The next day we headed up to show off the beauty of the Bokong valley and to get some more yellows to everyone’s name. Both of these went to plan and a great day was had by all. John managed some really cool fish in fast flowing riffle water that left him with a beaming smile for hours as he had just returned to fishing after a 10 year or so break.

Unfortunately the day came for everyone to head back but as soon as they left, the next guests arrived. Varsity mates Reinard and Jan joined Howard, Mo and Greg.

Many days of sunshine resulted in lot of hungry fish moving into the shallows so great sight fishing was expected. This was the case and many fish came to the net. Reinard and Jan were particularly successful with 12 fish being landed between them just in the morning session, including a double up. The fish were all very eager to come up to dries and were supercharged once hooked.

The next day higher up the valley, we experienced more than just the usual excitement with the fly rod as we experienced an electrical storm to remember. After finding shelter under a bush and a hot cup of coffee supplied by Jan and Reinard, the storm moved on quickly and with that the fishing exploded as a hatch had occurred during the storm.

Unfortunately that evening the wind picked up like none of us have ever experienced and caused a bit of damage around the camp. This resulted in some required maintenance but this did not stop the men taking to the water the next day and having another awesome day on the water with some really big fish being spotted moving up into the pools.

This ended the last group until the season starts again in January and what a great start to the season it was! We are itching to get back at it and to see the countless fish that would have made their way into the river. Until then James Martin. 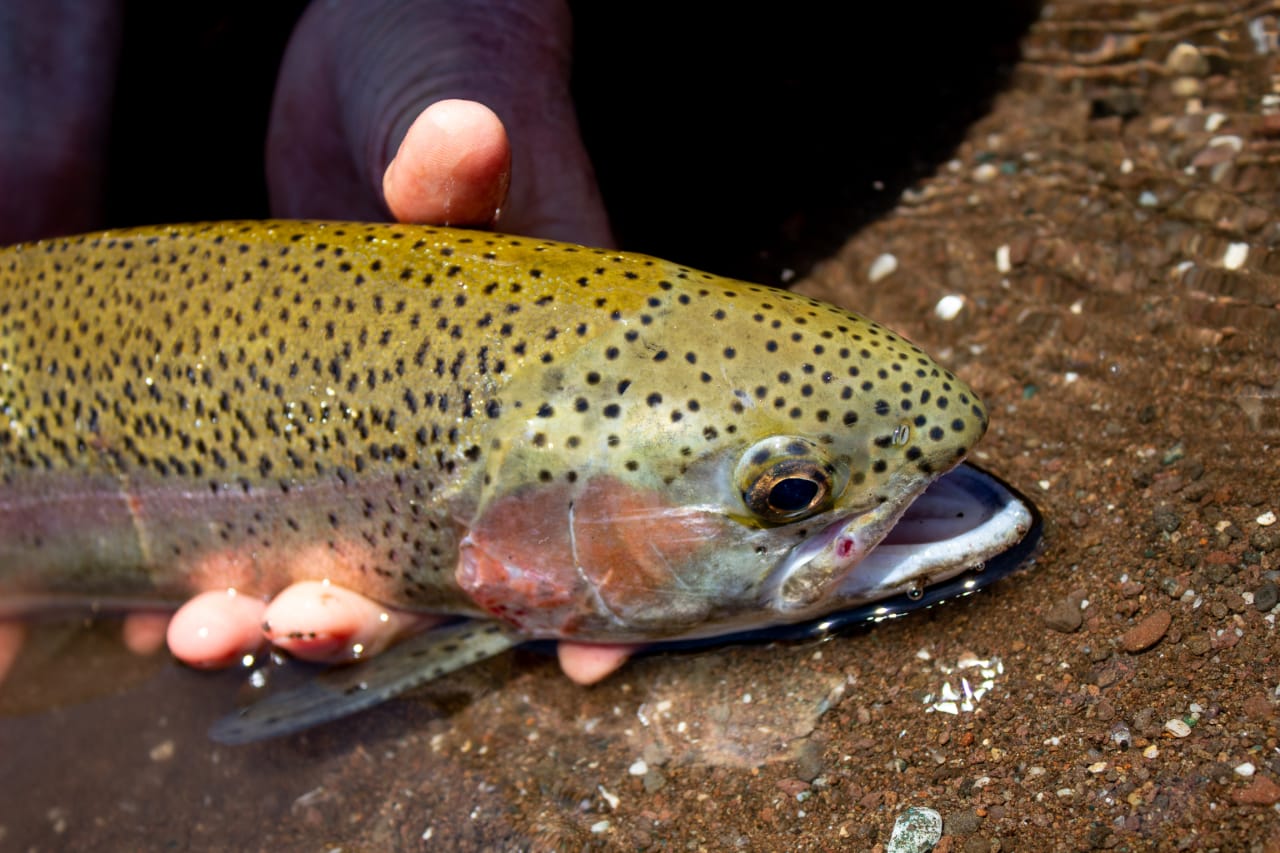 John landed this beautiful rainbow trout. While Peter landed a yellow, together with the yellowfish, the group achieved a combined Makhangoa Slam on their first outing! 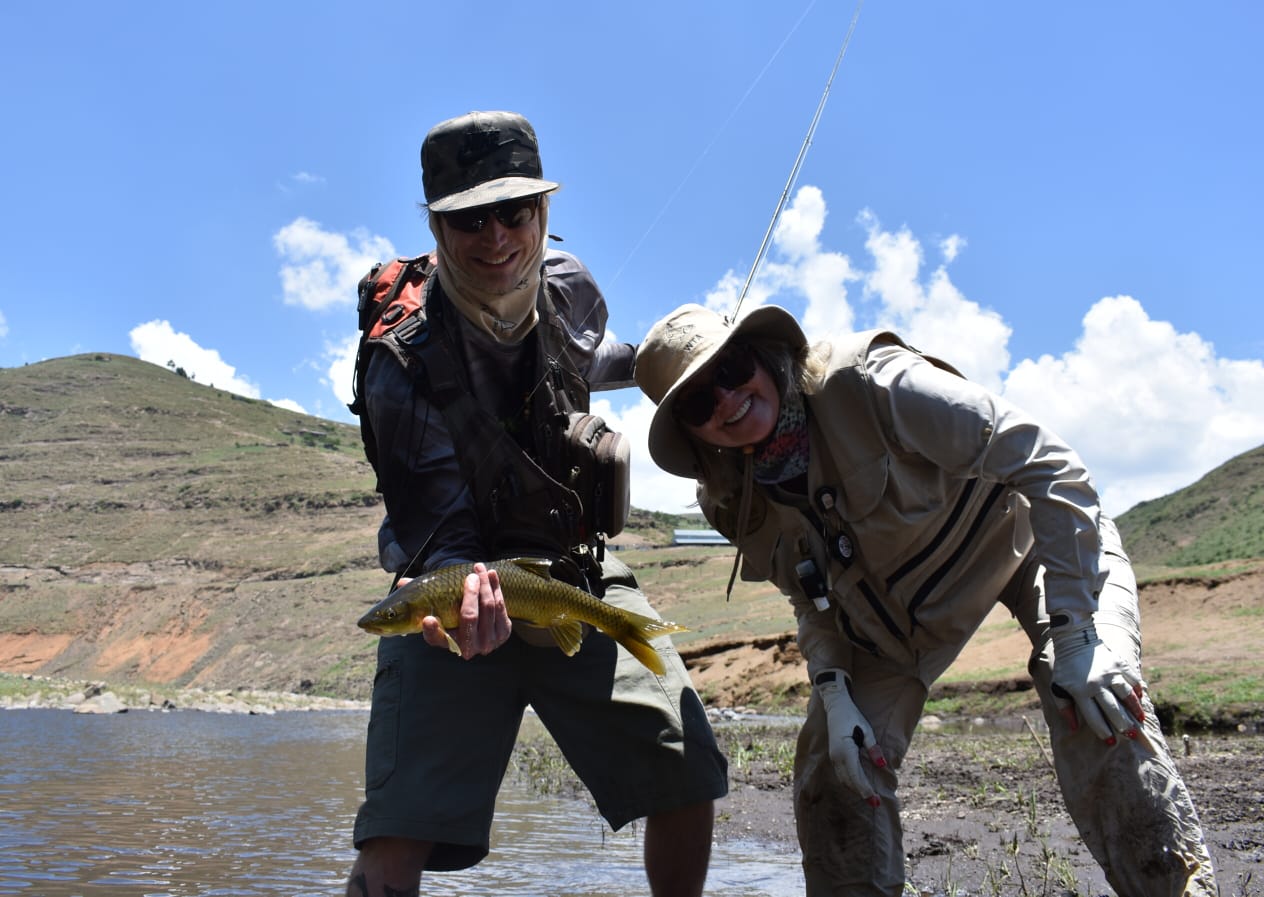 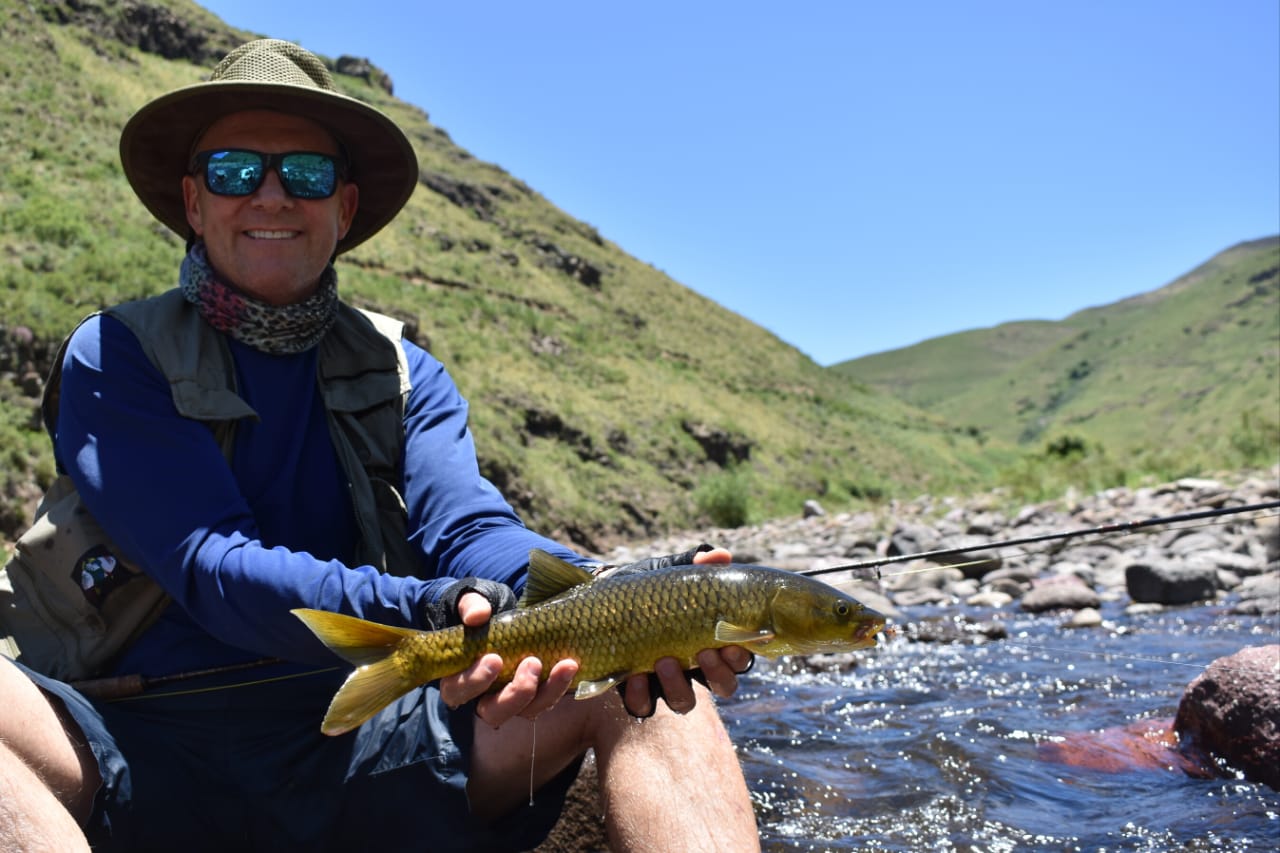 John, normally seen in a K1 or K2 when on the water, was enjoying his time out of the boat and with a fly fishing rod in his hand. 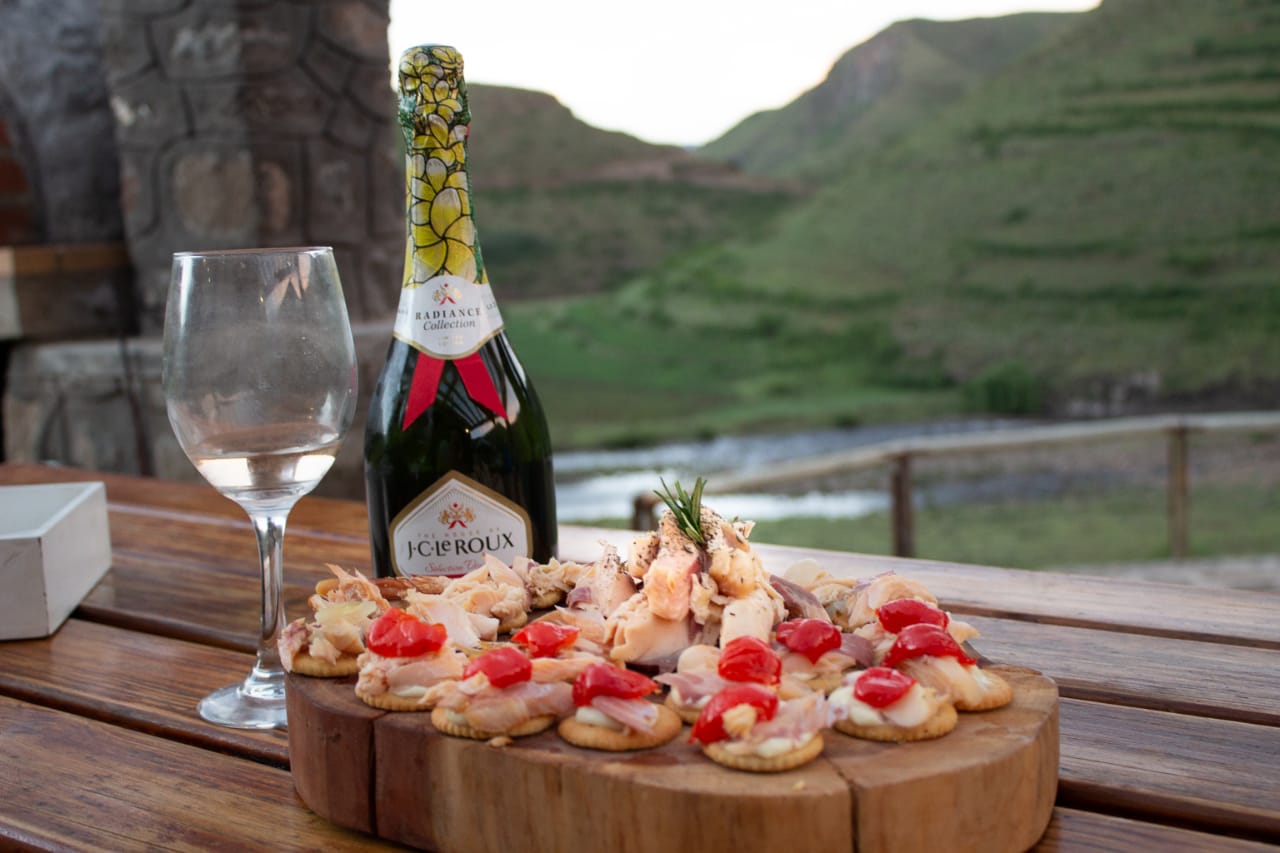 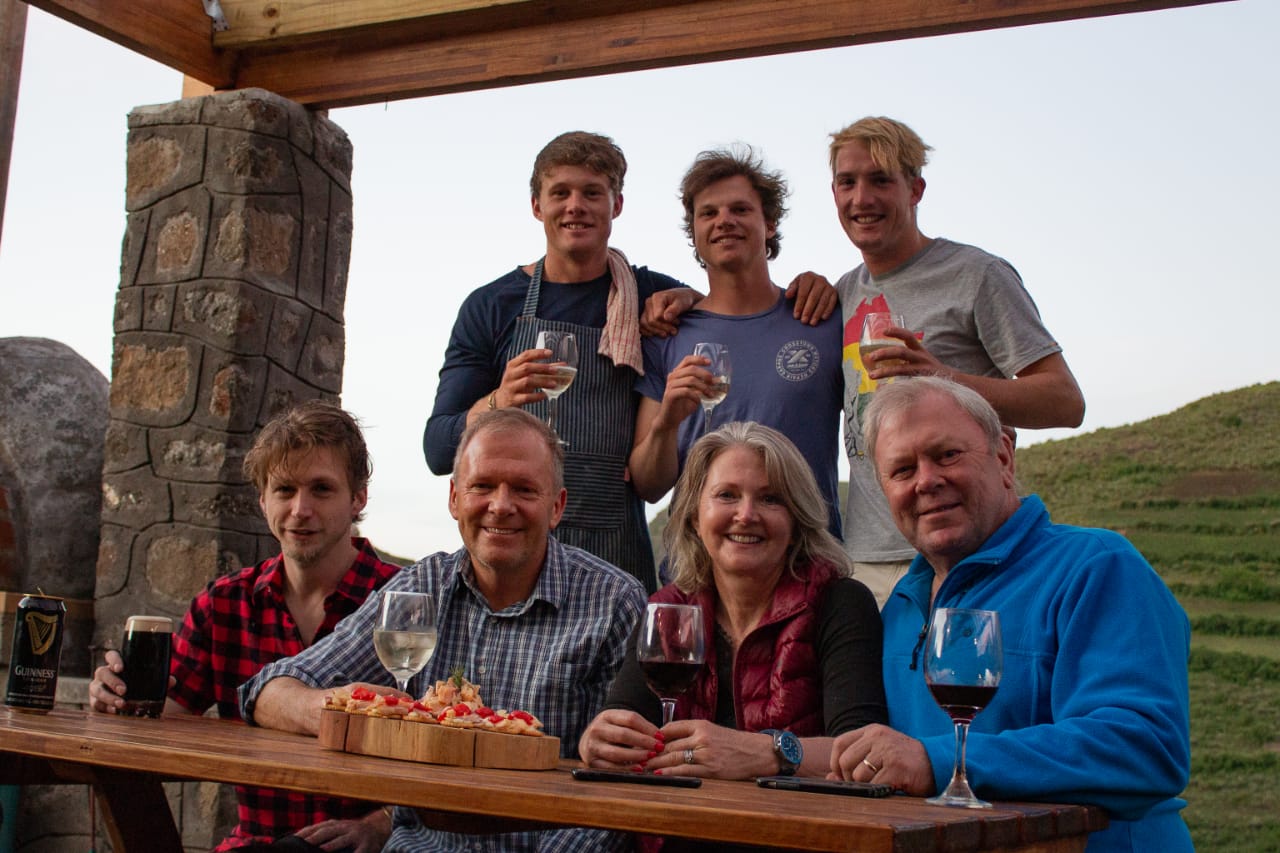 Cheers to a great trip and superb company! Thanks for the visit, Peter, Veronica, Mike and John 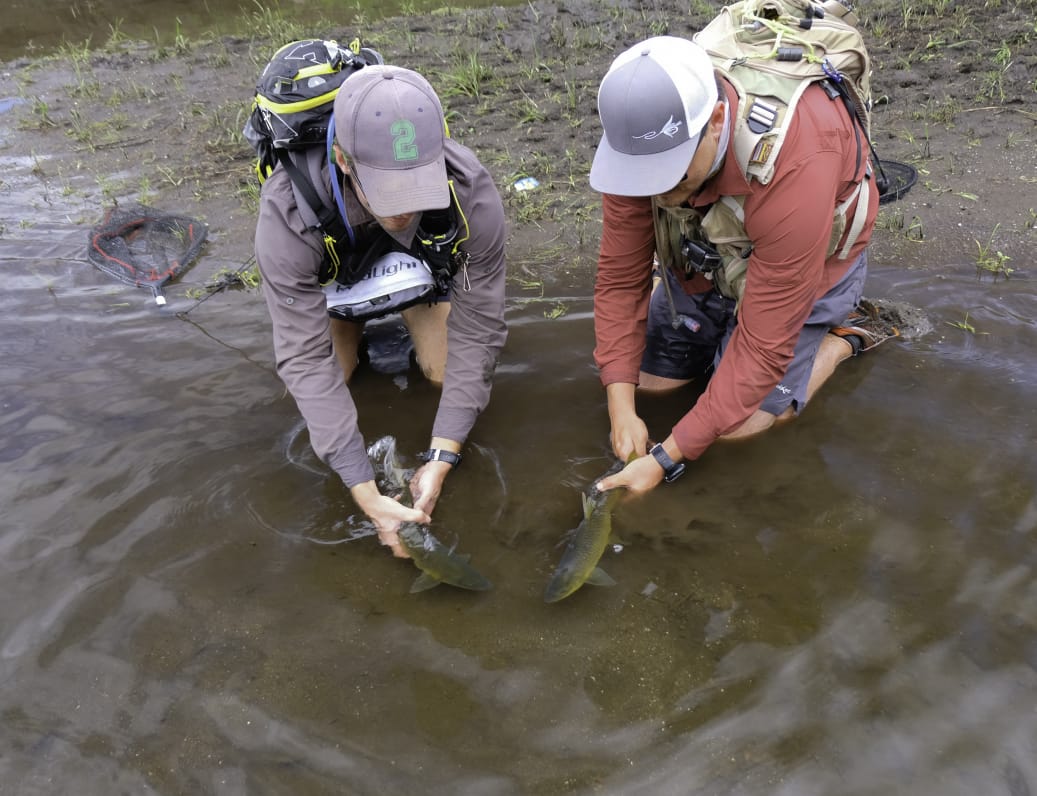 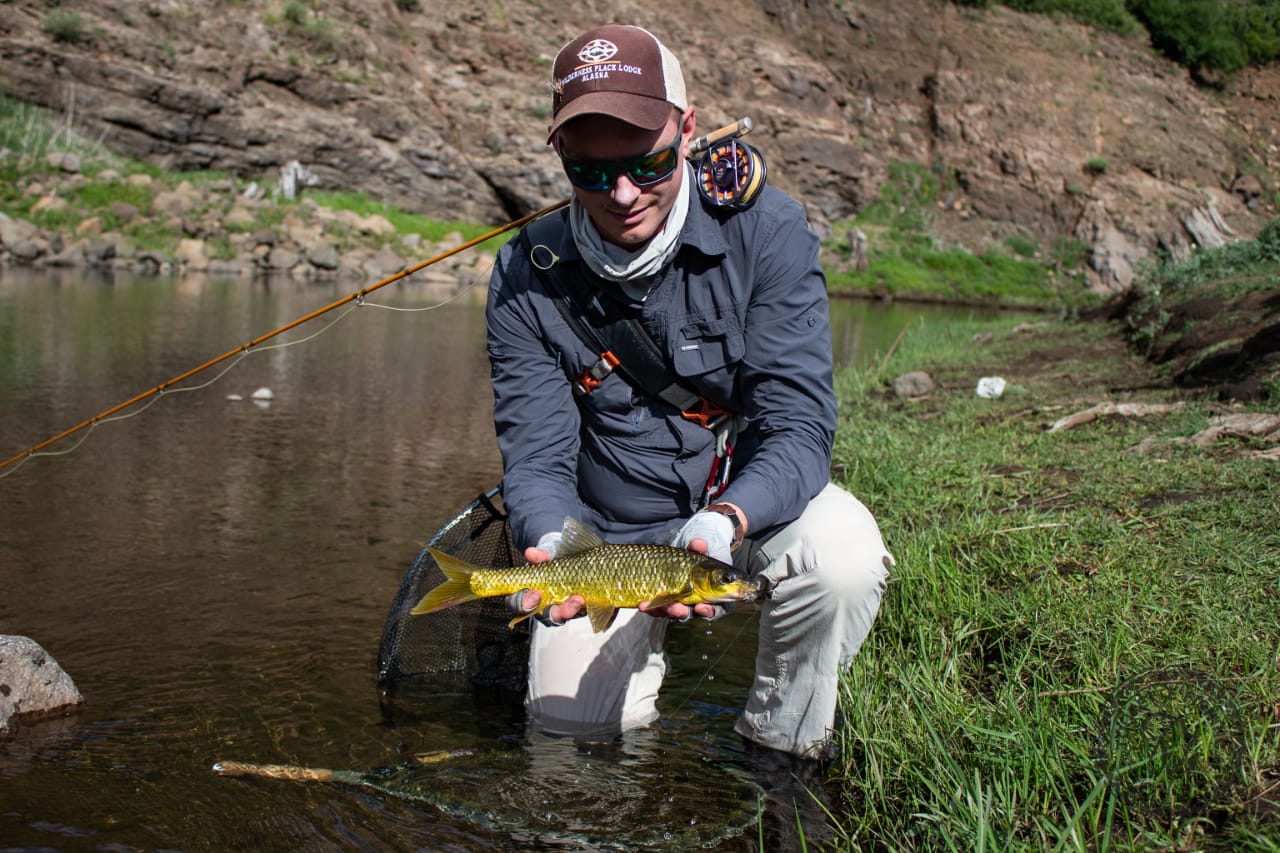 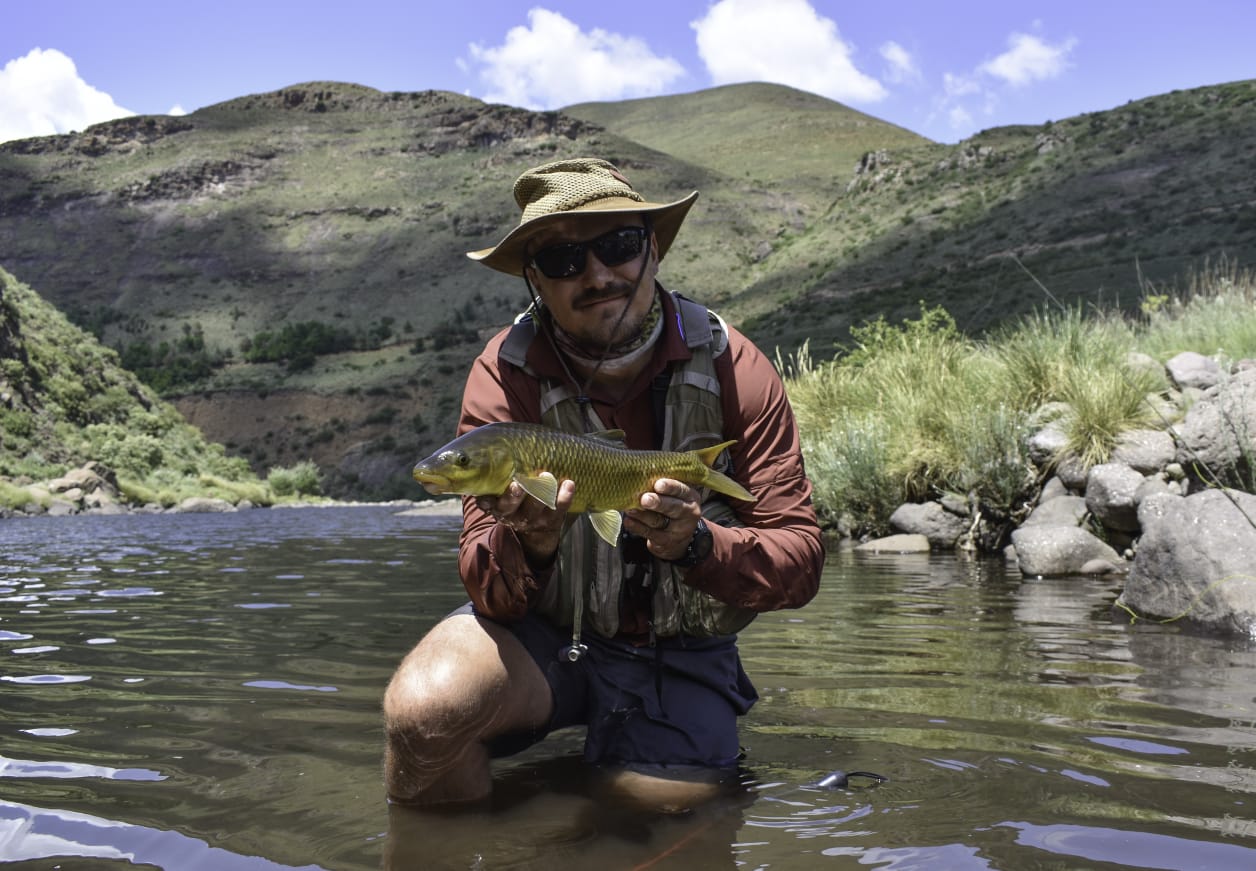 Fishing the top of beat two, in the tail-out section of ‘Oh so technical’ anglers were treated to some world class sight fishing 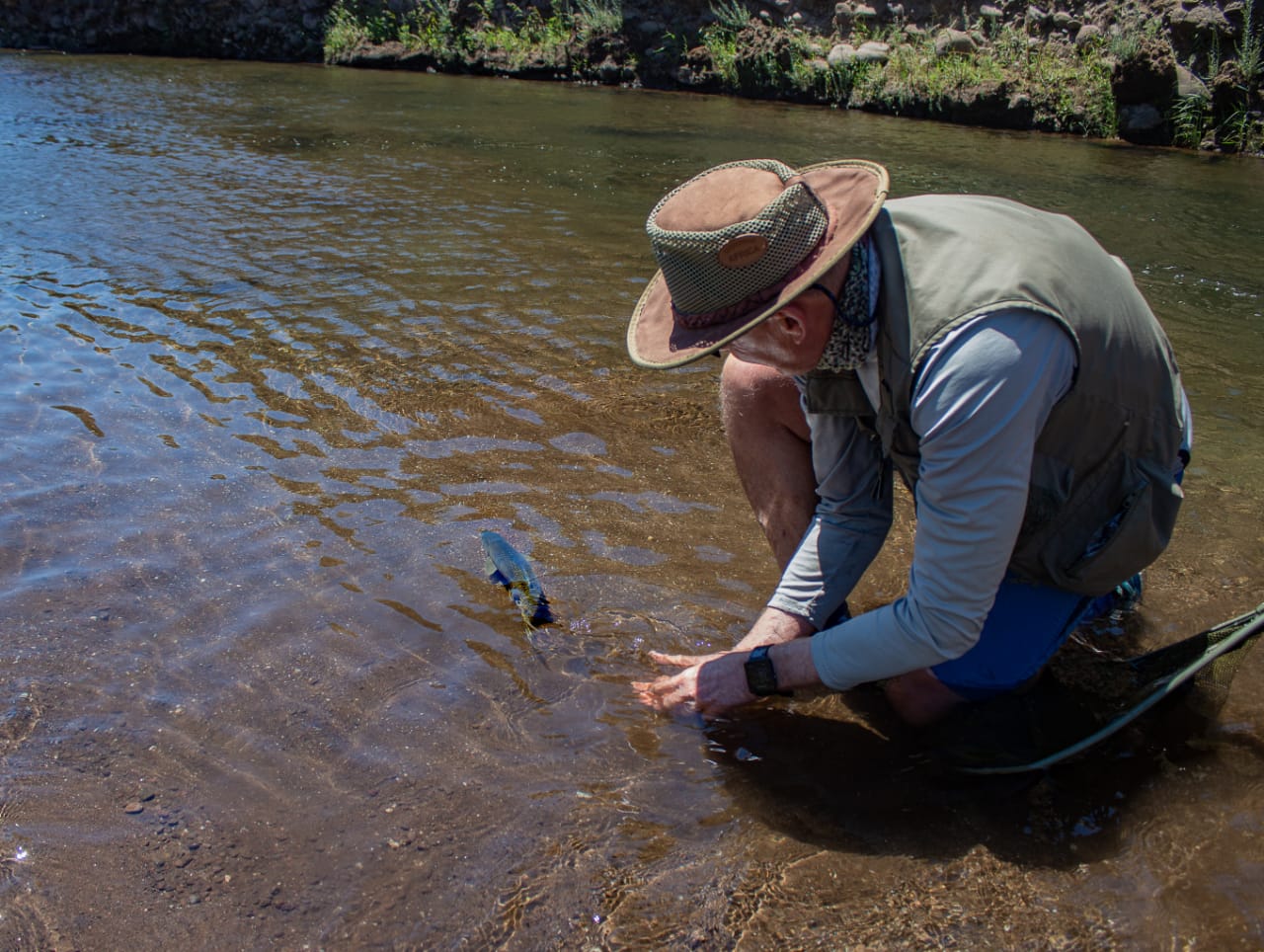 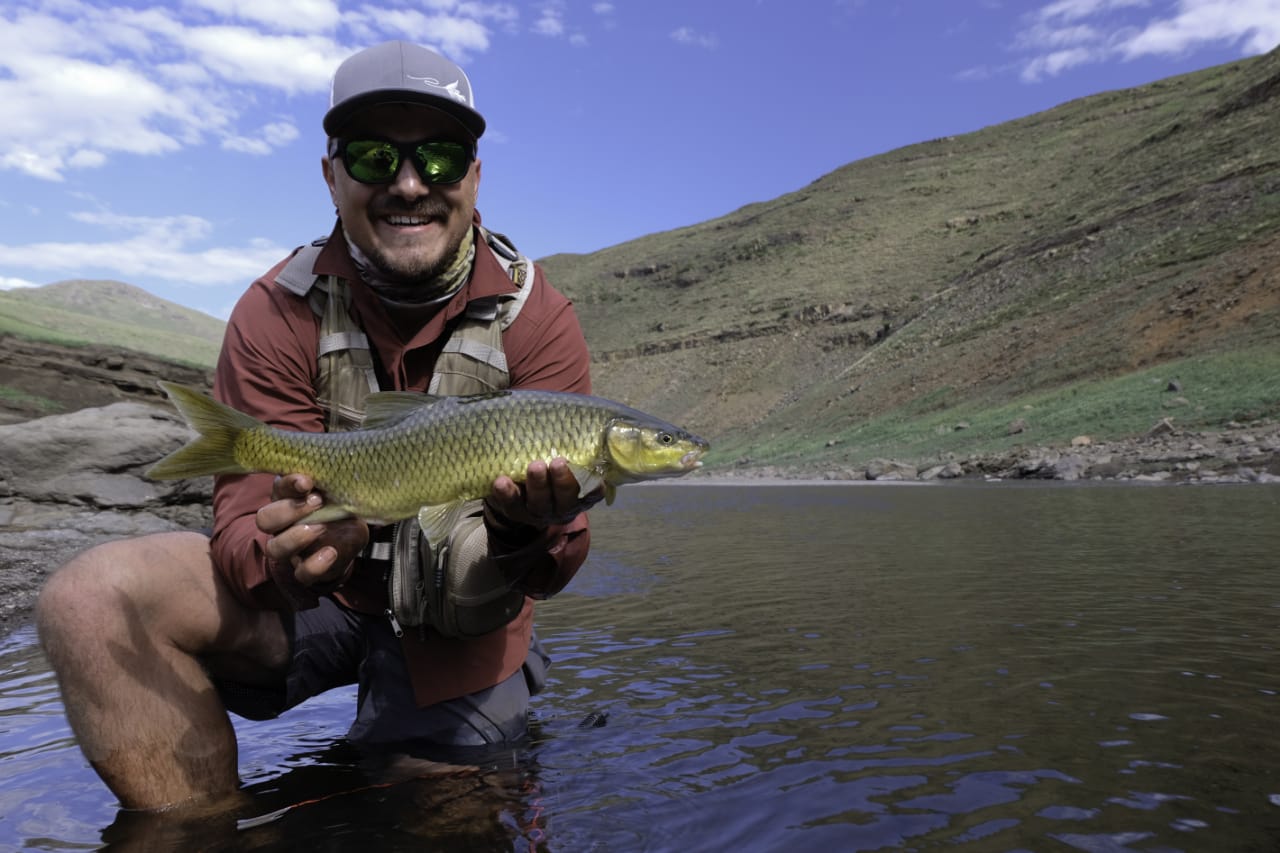