With a Toyota Quantum approaching from a distance struggling up the hills of the breath-taking Lesotho Highlands, we knew this was going to be an interesting week. Upon arrival, we were greeted by a South African turned Swedish journalist by the name of Simon who was transporting a mixture of Swedish gentlemen, Claus, Johnny, Ola, Mathias and Leif, who from the get go provided an interesting host of skills, discussions and knowledge from afar. With a toast after the night’s proceedings in genuine Swedish fashion using the phrase ‘skol’, or cheers in English, we were ready to head off in search of fish.

To settle the group in we headed off to the estuary to see if any of the monster trout lurking in the deep were around hunting the yellow fish fry, or try and entice the late season yellows to a dry. While Simon spearheaded the filming of the Swede’s trip, Johnny was stalking the hills with his camo arsenal of clothing and trusty camera in hand in search of our local avian friends. The rest of the group headed out along the banks of the estuary stalking our quarry. Ola felt the typical tug on the end of his line by a brute of an estimated 8 lbs, unfortunately the large trout had other plans and popped the hook with a headshake and disappeared back into its murky lair leaving the angler with a surprised look on his face. Mathias probed the banks and was able to bring five lively trout to the net with none of them being monsters. Unfortunately, the afternoon session didn’t provide any fish with an afternoon hatch of midges making the fish fickle and rather picky with no flies of any kind producing fish.

The second day we arranged eight horses for the fishing that was to happen on beat four and five. After much debate, as to who would ride which horse, and discovering that Leif has never ridden an animal of such stature before, 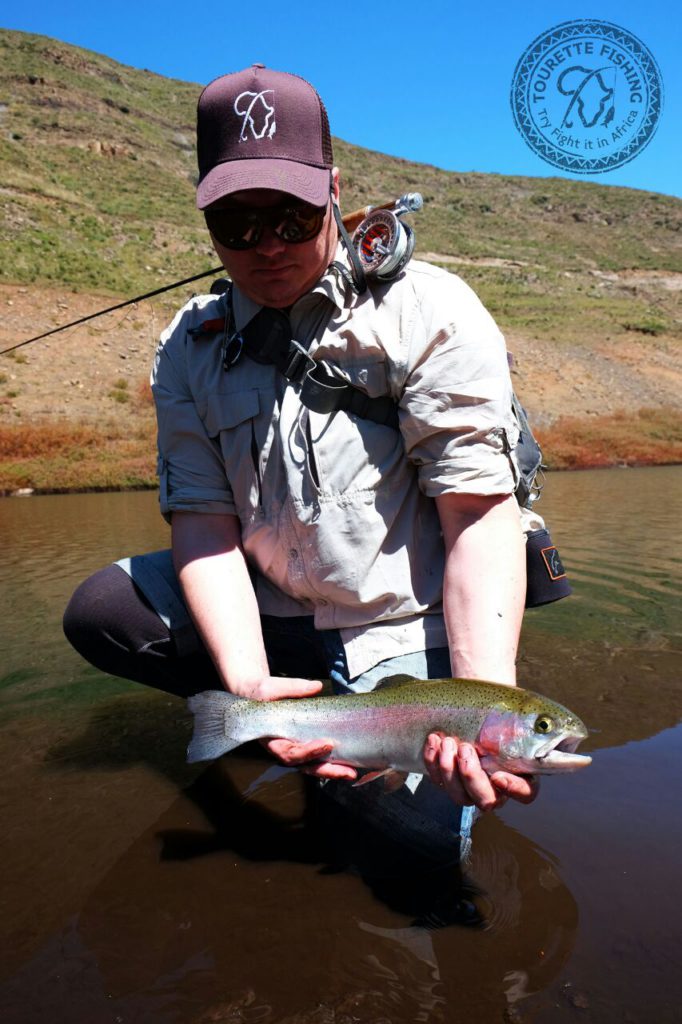 Mathias with a lovely rainbow trout from the Bokong Estuary, Makhangoa Community Camp 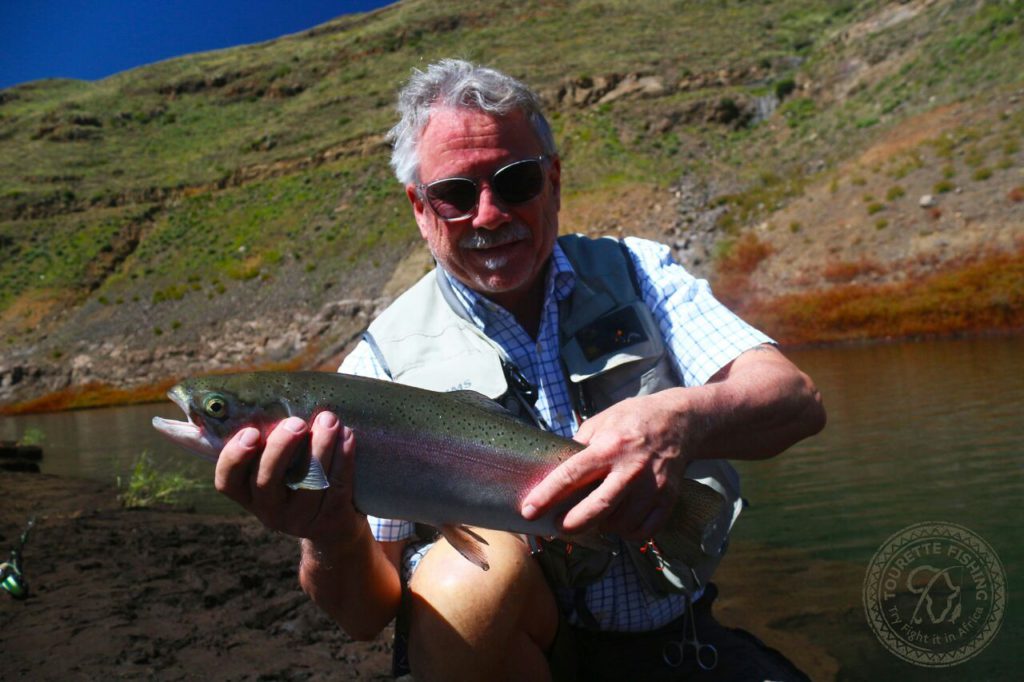 we paired him with the most docile of horses. All packed and ready we set off upriver with the sun peering over the mountains behind us. The journey to our destination was filled with Simon riding backwards on a horse filming which provided much entertainment as well as one of our guides falling off a horse, no names shall be mentioned (it was I, Brent). Beat 4 and 5 were holding a good head of trophy yellowfish, but in super skinny water. Mathias was the only angler to convert two yellowfish on the day, with many fish being spooked and snapped off, proving again how tough the conditions were. Johnny was in search of the much-famed Bearded Vultures that nest at the end of beat 4, yet instead was greeted by another welcoming sight of a pair of Verreauxs’ Eagles. Even though the day was challenging to say the least we were 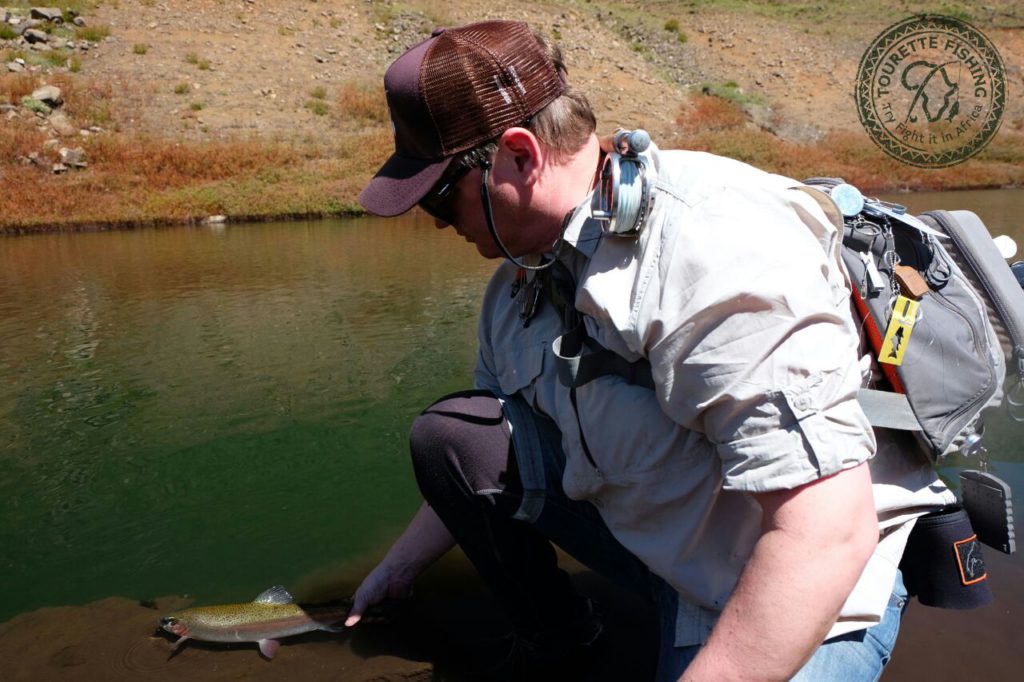 blessed with good weather and good company which made the day one for the books. All of us agreed, guides and guests included, that the horse ride was the highlight of the trip. For Mathias, it was truly a dream come true, venturing out on horseback with a fly rod in hand ready to pursue fish with his flies fresh off the vice.

The third and final day we all woke up with slightly tender rear end after the long journey on horseback the previous day, all agreed that another day at the estuary was on the cards. This was due to the fact that an Asada (lamb on the spit) would be prepared by head guide Johann, which required his attention be diverted from the fishing, and directed toward the the ample cooking time. With the morning session commencing Johanne and Mathias decided to wade the 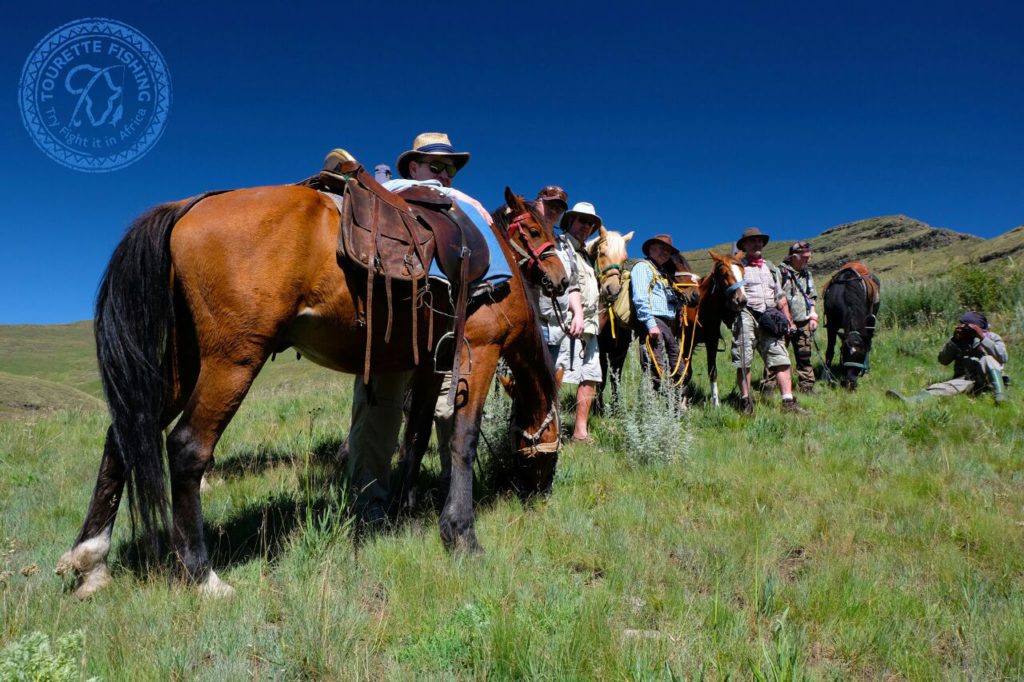 Resting horses and butts, as the team make their way on horse back to fish Beats 4 and 5, from the Makhangoa Community Camp, Lesotho

‘Aquarium’ above the footbridge in search of some yellows in the riffle water making for some exciting fishing, this proved to be tough once again due to the water levels with a few small par marked trout being subdued with the dry. A few yellow fish were also enticed however managed to evade capture by the ever-eager hand of Mathias. The other Swede’s tried the estuary where Ola managed to entice a decent 4lb wild bow onto his black and gold flash Woolly Bugger with a smaller fish shortly thereafter. However, the rest of the group didn’t manage to entice any trout and the morning session came to an abrupt end when the sun rose too high overhead and tummies started to rumble.

With the lamb, well under way under Johannes’s watchful eye, what was meant to 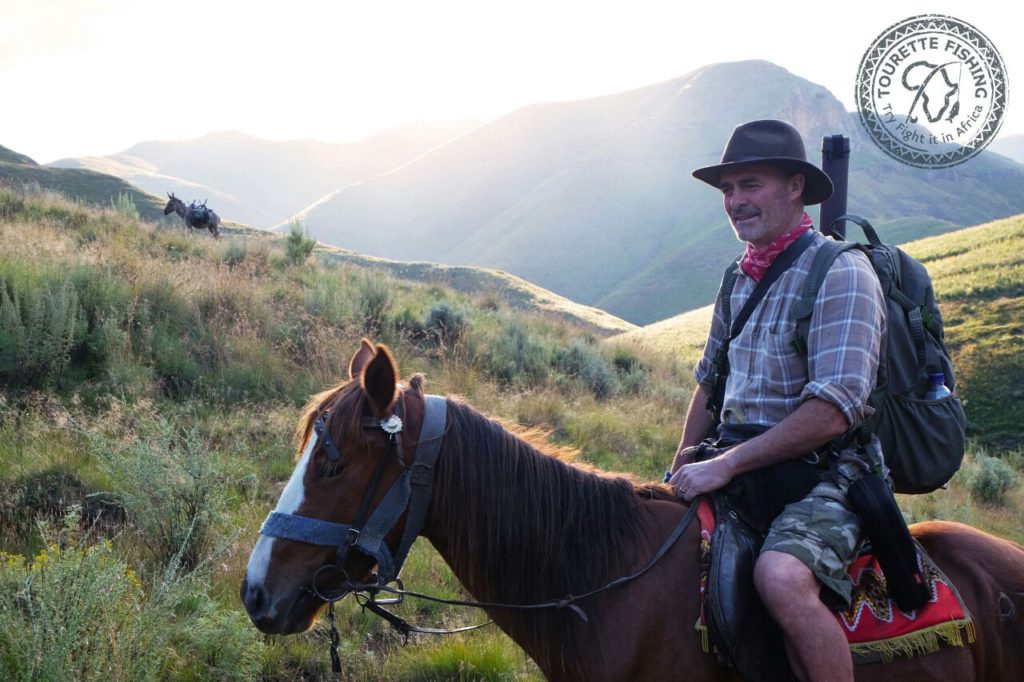 The group leader, Simon, a very accomplished horse rider, enjoying his time in the mountains.

be a social afternoon round the fire telling stories, turned into an urgent need to head back out onto the water. With the bakkie (pick truck or 4×4) packed an afternoon session soon progressed, however conditions were once again tough, with the weather starting to take a turn for the worse, Mathias once again prevailed and managed to take a yellow on a dry in the estuary which was the only fish caught in that session. With dust flying due to the wind we left the water with the sight of the amber coloured clouds in the rear-view mirror. Making our way back to camp for a duly deserved hot shower and a ‘cold one’ for the day’s efforts, we enjoyed a night of eating and a few bottles of SA’s finest red wine paired with the succulent free range Lesotho lamb that was so wonderfully prepared. The next morning, we exchanged details, a good hearty breakfast and soon ushered the Swede’s and Simon on their way to continue their journey through Southern Africa. Johanne and I left with good memories and a nervous feeling as a fully loaded Quantum packed to the brim made its way down the hill with the Swede’s walking beside it to allow for no under carriage damage. 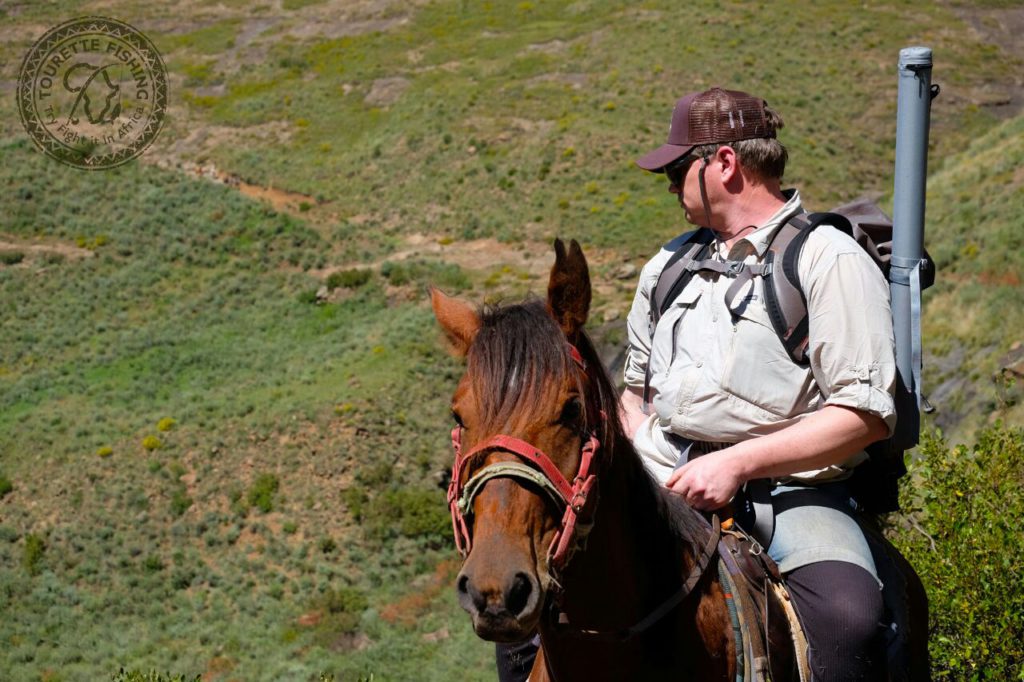 Mathias putting his trust in the sure footed Basotho pony, while he scans the Bokong River below for feeding yellowfish 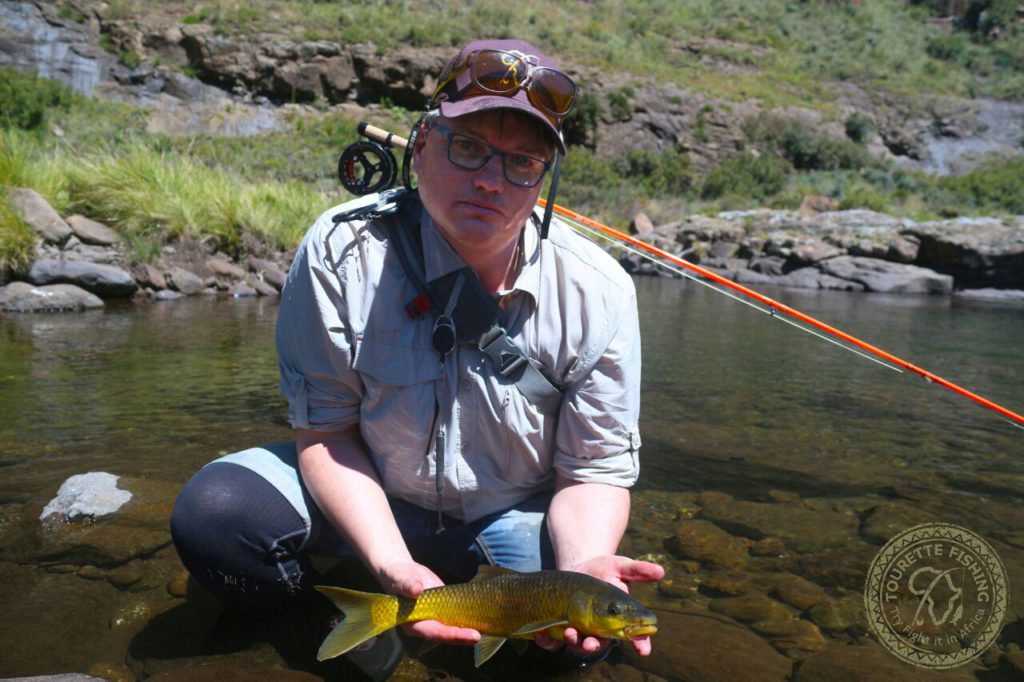 Mathias, definitely the captain of the Swedish team, as he managed to covert a tricky yellowfish in skinny gin clear water at the top of beat 4. Makhangoa Community Camp. 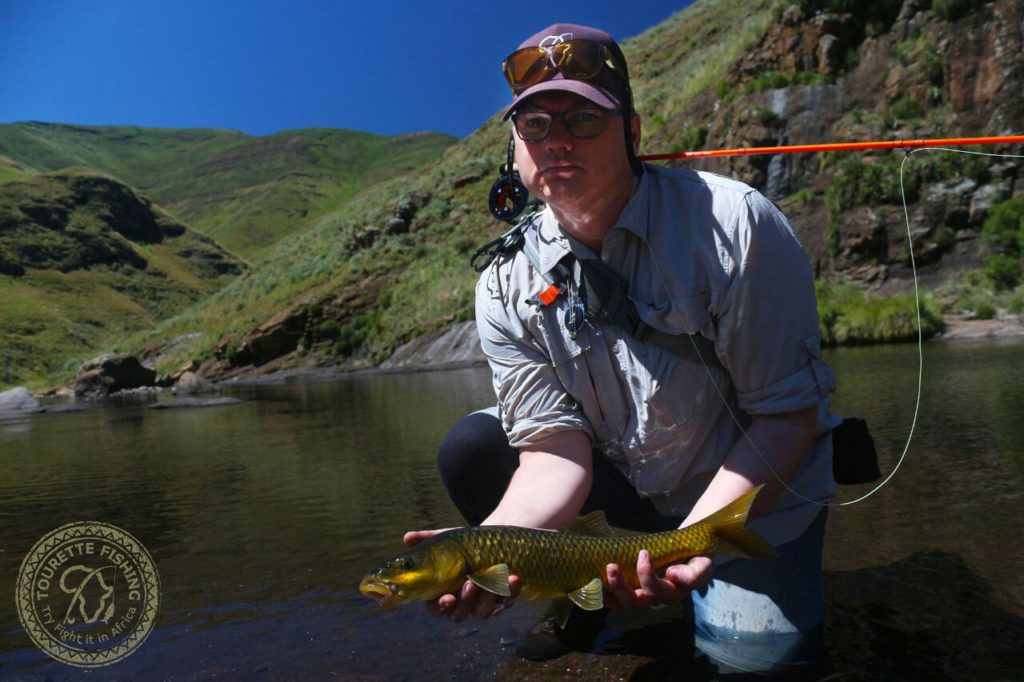 More tricky yellowfish action on the upper Bokong River for Mathias and his Epic Glass Rod. 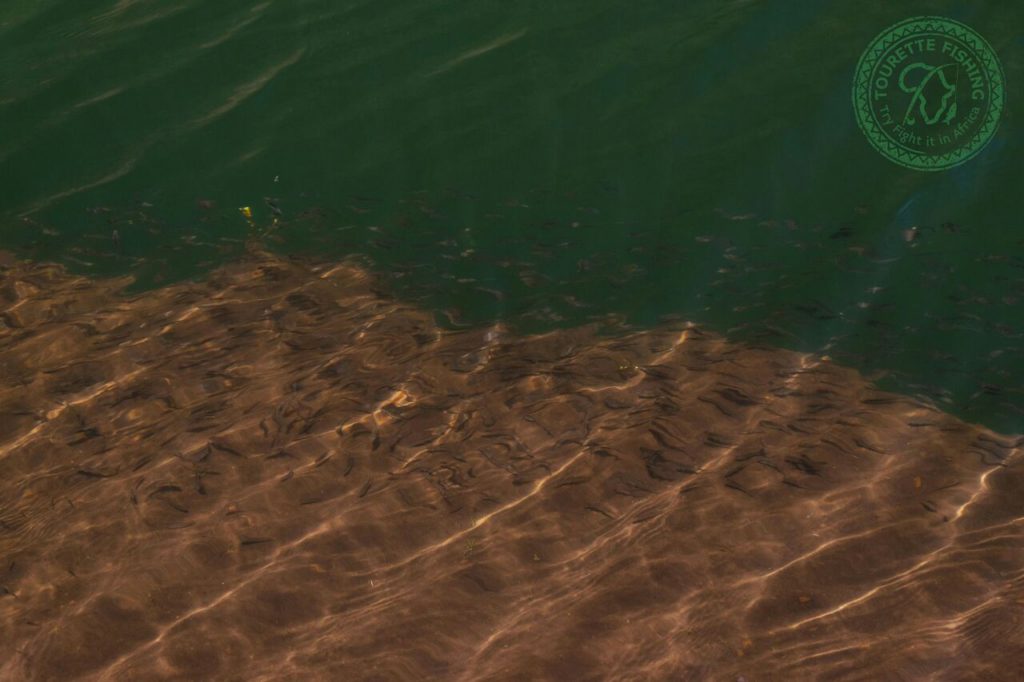 Yellowfish fry taking shelter in the shallows of the Bokong Estuary. As the temperatures drop, the trout should begin their annual move to the area to start feeding on these small fish. 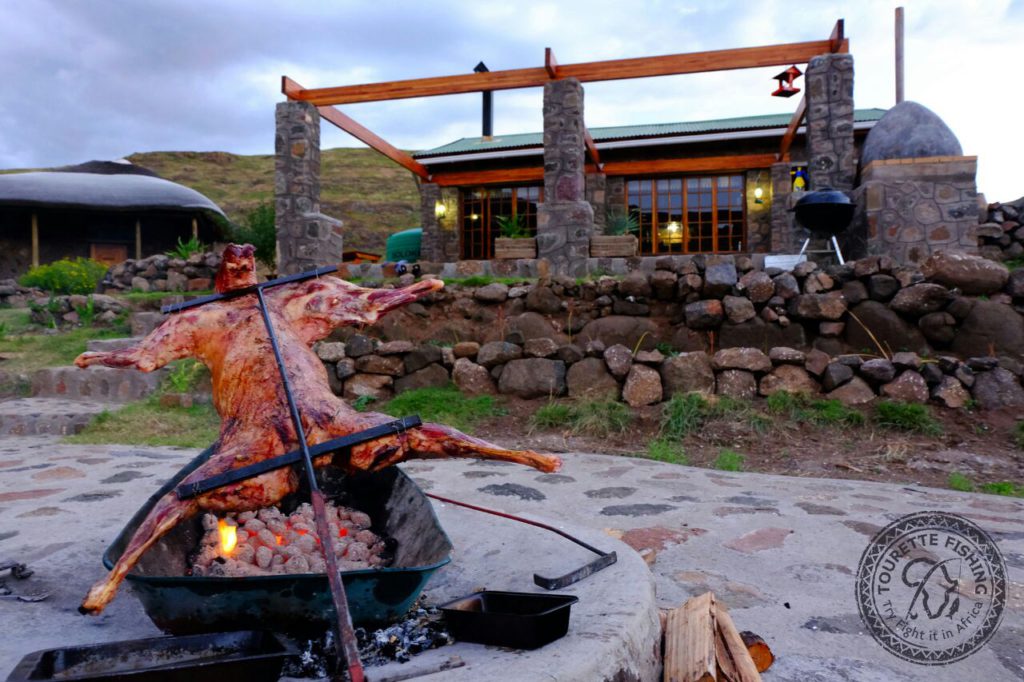