Fly fishing guiding is a great leveller and as any fly fishing guide will tell you, you can go from hero to zero in no time at all. No matter how good you are at your job as a fly-fishing guide there will come a time where Mother Nature will make things impossible for you. This pretty much sums up what the last few weeks of February was like. We had the best week of the season with the Macduff and Fitzsimons bothers in the backcountry where the bounty of the Bokong River was as clear as its waters, but only a few days later the effects of cyclone Dineo rolled in with fury.

Good friend of Tourette Fishing, Vossie, was joined in camp by Owen and Zoran. We knew 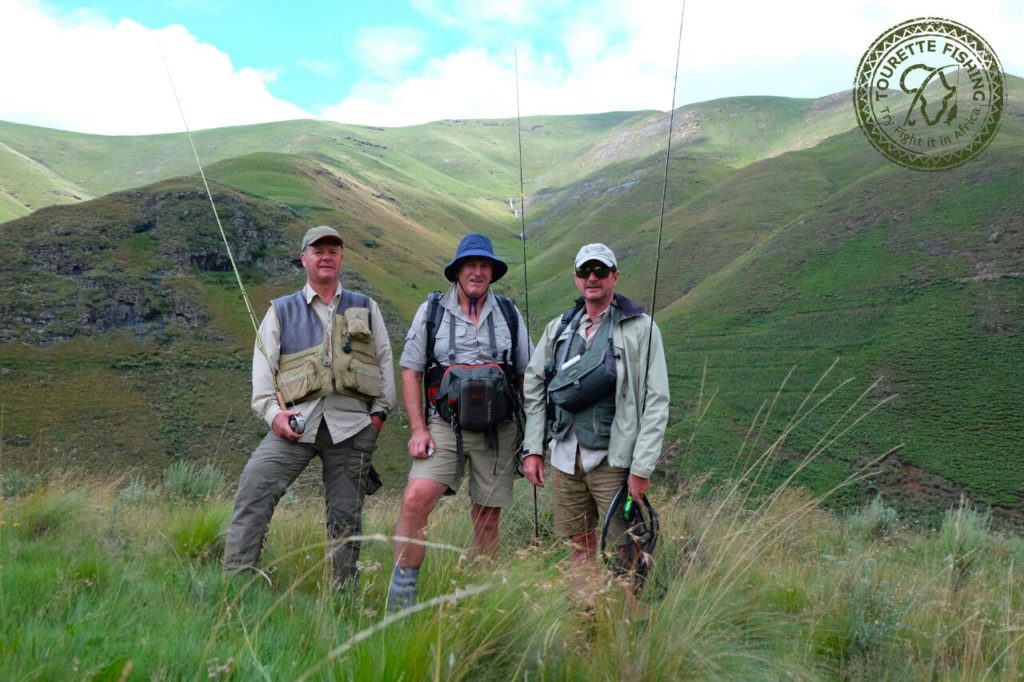 Heading up to the magical waters of the upper Bokong River, Makhangoa Community Camp 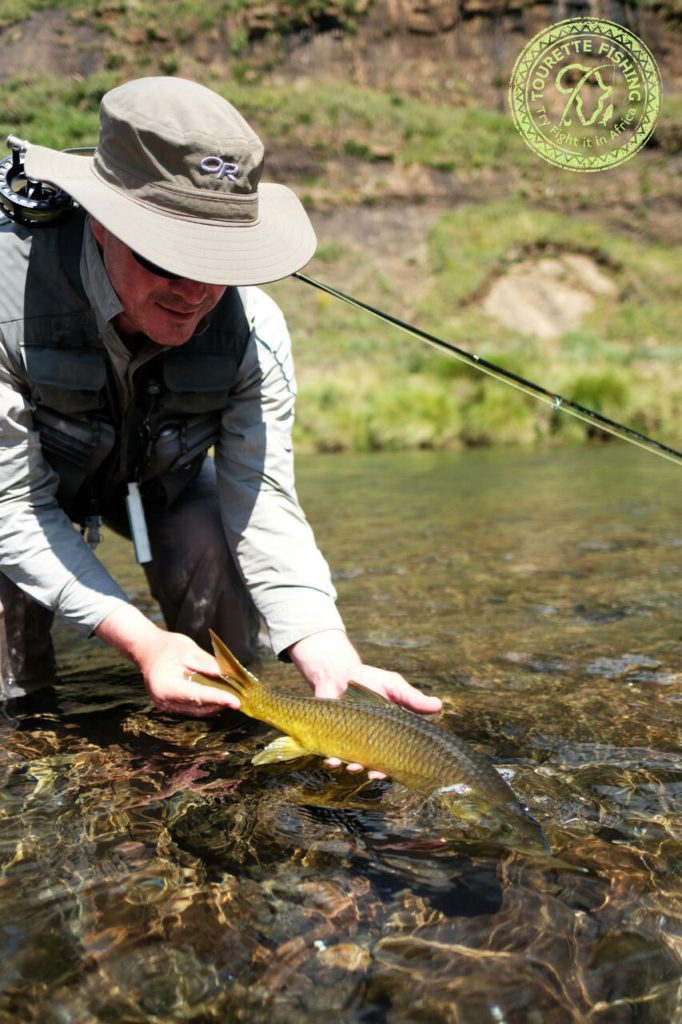 that the river would go into flood for the next couple of days and thus we braved the weather and fished as hard as we could while it was still possible. Owen, the Scotsman, felt quite as home in the wet highlands and his perseverance paid off as he landed several good fish Czech-nymphing. Zoran also found inventive ways of fooling the fish into eating his flies, I don’t think there is a proper name for his technique, but I can tell you that it works. For the rest of their stay we were stuck in camp as the Bokong River came down in a raging, cold mess. This didn’t seem to bother Vossie, Owen and Zoran too much as there was good food, lots of beer and great company to compensate.

On their last day we treated these fine gentlemen to an asada (a whole sheep slow-roasted over the coals) and fire-side banter made me realise once again that fly fishing is about much more than just the fishing, it’s about the camaraderie.

As they left the rains began to die down and the river subsided. Although the water began to clear it was still well in flood when the Ralph Ririe and his mates arrived. For four full days, we tried everything; up-river and down-river, wet flies, dry flies, floating lines, sinking lines. To say it was tough is an understatement, but the hard work paid off. Ralph Milton and I hit a purple patch on beat four where our nymphs proved too much for the yellows to resist. Ririe also found his groove and pinned a very decent yellow with Stu right in front of our lunch spot. Reinhardt and I put in maximum effort on their second to last day. We worked every inch of fishable water with little results but just as 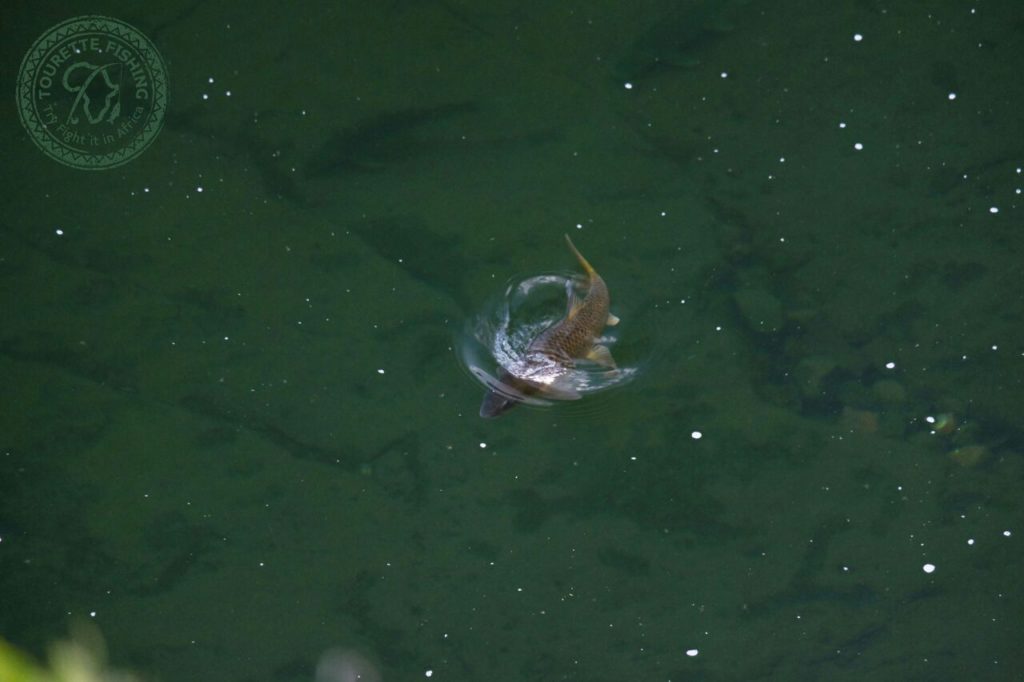 A yellowfish on the Bokong River breaks from it holding lie to rise and eat a well placed dry fly. 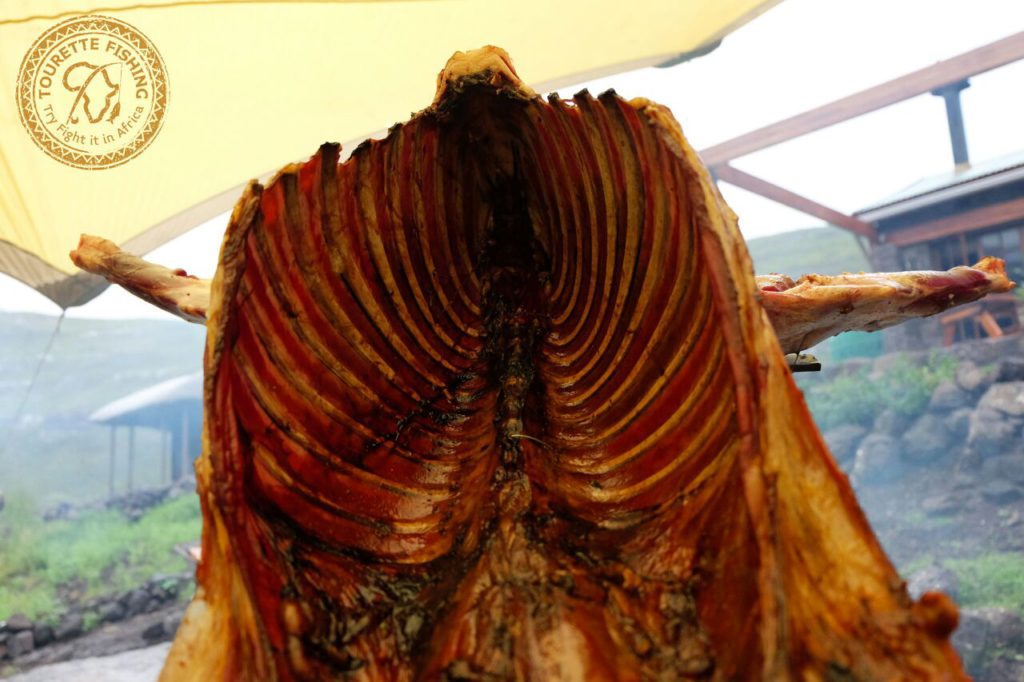 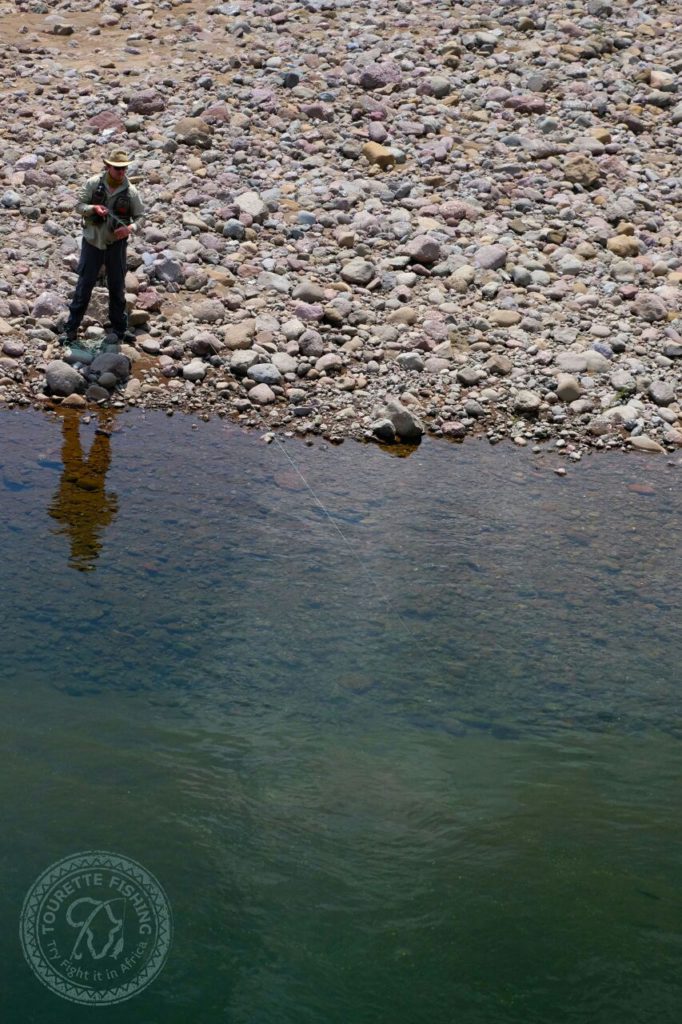 And away she goes. Spot, plan, and execute. Sight fishing from the Makhangoa Community Camp, Lesotho. 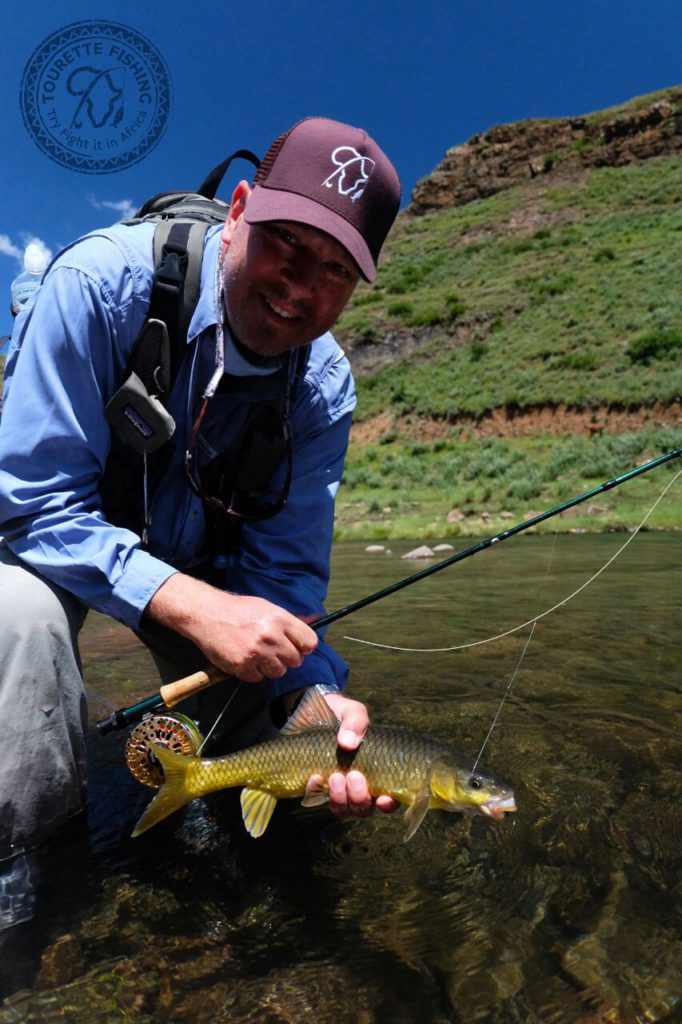 desperation reached its peak we found a pod of feeding yellows and all it took was one well-placed cast.

Brent made it his sole purpose to get Garth onto a few fish before their time on Bokong ran out. They fished the water in front of the woolshed as thoroughly as possible. When then the fish came rolling in it was worth all the effort. Despite the very tough conditions it was a good trip and a great learning curve for all. Garth now double-hauls like a champion and Millie will mend his fly into any fish’s mouth.

As Ralph and his team left camp our 18th group of the season rolled in for their turn to take on Mother Nature. Seb, Allan and Glyn are return guests who had a terrific trip last year. This time round they brought along a 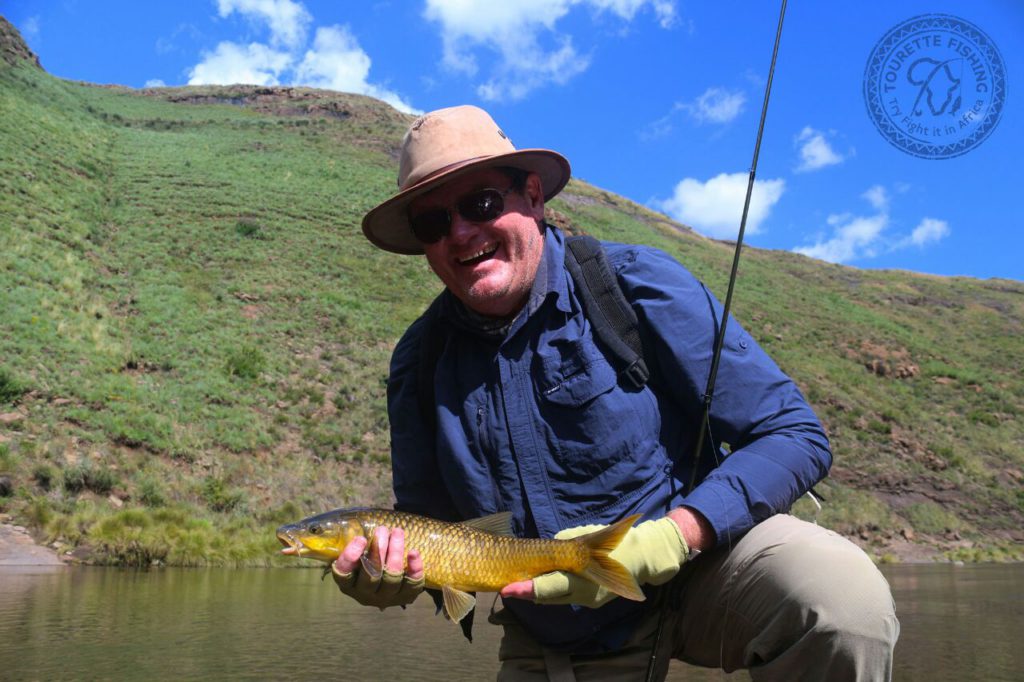 The face of happiness when a plan comes together. Sight Fishing to yellowfish on the Bokong River 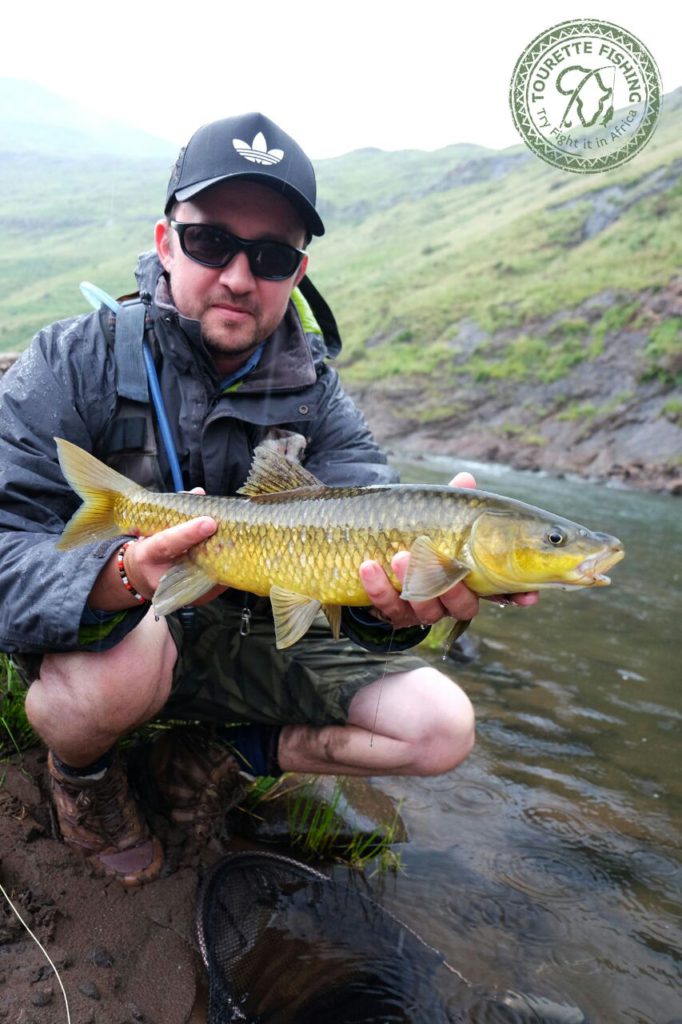 Owen with a trophy yellowfish fish, taken in less that perfect conditions on the Bokong River, Makhangoa Community Camp 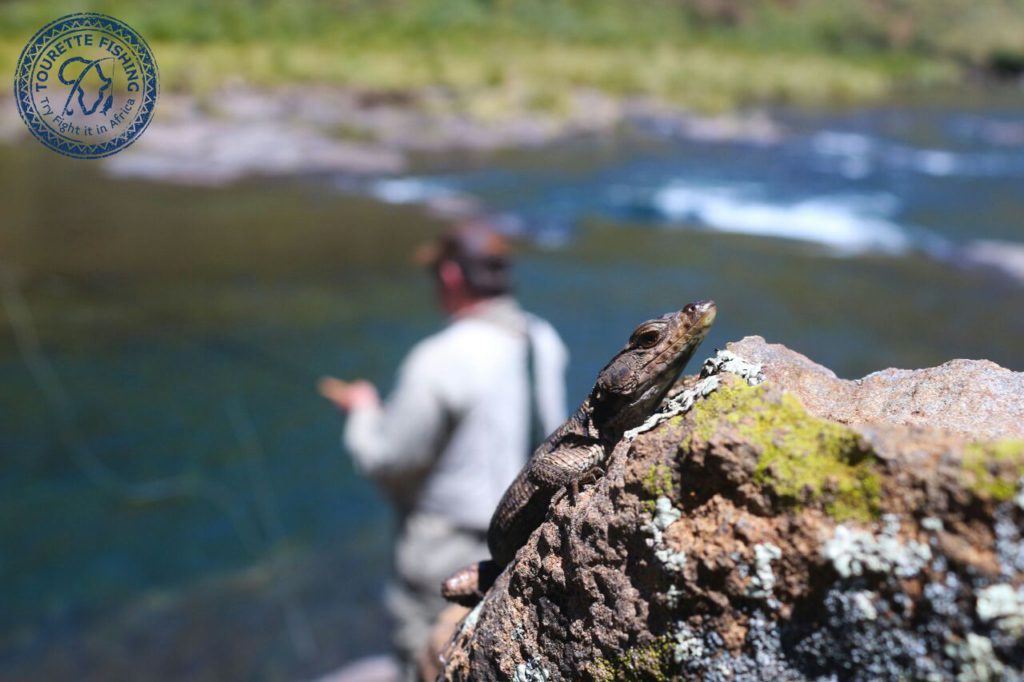 few mates; Ashley, Russel, Simon, Pete and Andrew. It was a proper full-house at the Makhangoa Community Camp and for the last three days the Mancave was filled with laughter and world-class banter.

The weather was back to normal once again and the river was is perfect condition, there was only one small problem, the normal big numbers of fish were absent. The Katse Dam is like a massive safe-house for the fish and every winter they migrate from the river into the dam to wait out the cold. Somehow the roller-coaster weather of the past week had confused the yellow fish into thinking that winter is coming and the all ran back to the dam. So once again Mother Nature had the upper hand. However, we never shy away from a challenge and we made it our mission to catch those fish that were still in the river no matter what. Seb, Allan and I fished a small ant-fall on home pool while the rest of the troop targeted beat zero. For the first afternoon things went pretty well, most of our guests caught fish but more importantly, everybody had a good time. Once every one got rid of the rust and cobwebs we headed up-river in search of the resident fish of beat four. It was a technical challenge, but one that we accepted with enthusiasm. The first part of any session with a client requires a bit of coaching. It’s not just about telling them what to do, but finding simple ways of showing them how to do it. I measure the success of a guiding session not by the amount or size of fish that are caught, but by the amount the fisherman I am guiding improves. This was the case especially with Andrew and Simon who both struggled through the technicalities but were 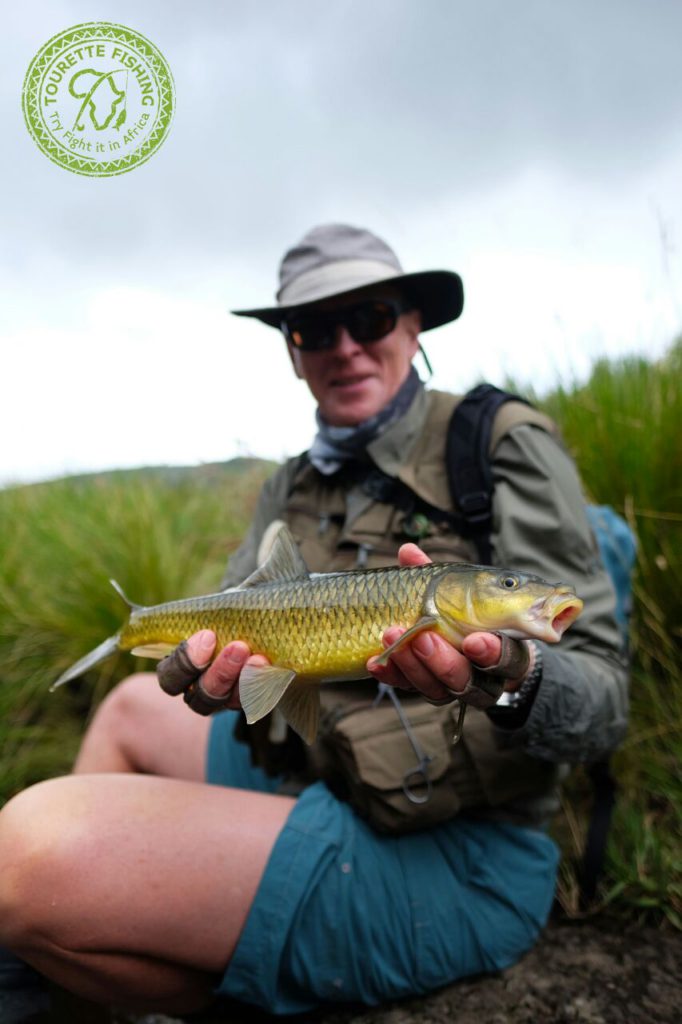 Wide brimmed hats, and dark neutral coloured clothing are exactly what are needed when spotting and stalking yellowfish on the Bokong River, and should be part of every guests packing list when visiting the Makhangoa Community Camp

handsomely rewarded with good fish in the end. Brent had an absolute ball of a time with Russel, who couldn’t suppress his joy when he caught his first yellow fish. It was a splendid day for all, overlooking the fact that we lost Seb and had to go on an hour-long man hunt. At least he caught some fish while we were looking for him…

On their last day, Stu went on the hunt for big trout in the estuary in the hope that the cold water would have drawn them up from the dam. One or two decent trout came out as well as a couple of yellows and it seems like we will have a good trout season this year. The last session had arrived and everybody had managed to catch a few fish, all but Ash. The fear of blanking was real, but there was hope. I took him to the footbridge where we spotted a good number 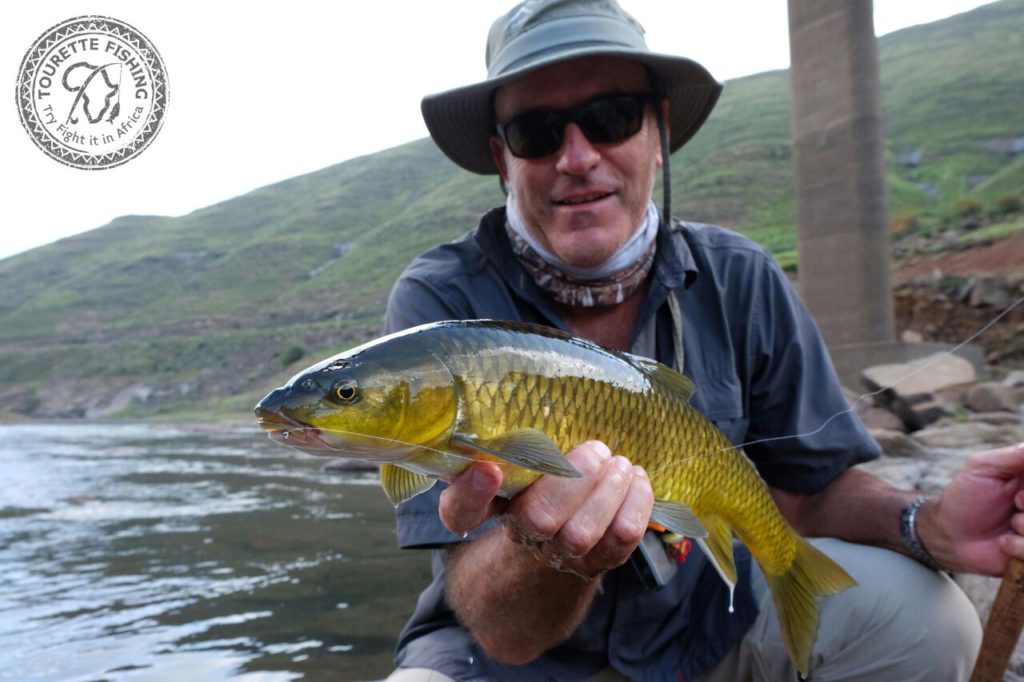 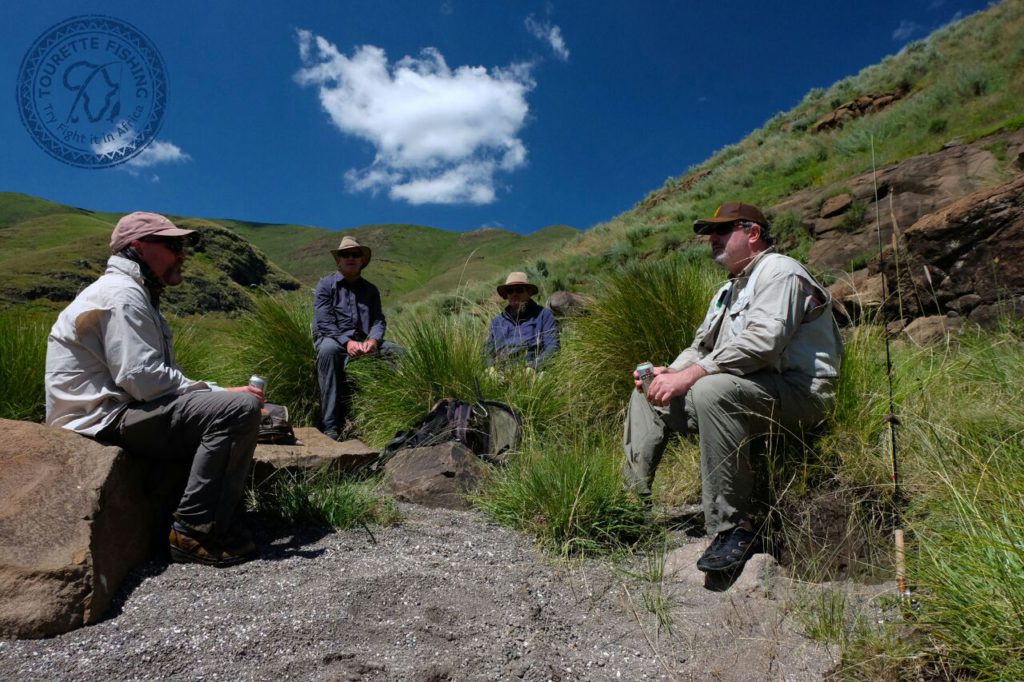 of fish holding in the faster water. We strapped on a hopper with a nymph hanging below it and set off to break the blank. Ash was keen to get on the scoreboard and paid careful attention as I explained what to do. He made a few loose casts then found his rhythm and it wasn’t long before line was screaming off the reel. From there on he managed four very decent yellows and was smiling from ear to ear. The last two hours of his fishing trip was the cherry on top.

Is has been a tough two weeks on the Bokong, but the good people we have had in camp has made the struggle worthwhile. We look forward to the last couple of weeks of the yellows fish season in anticipation of a cracking trout season. 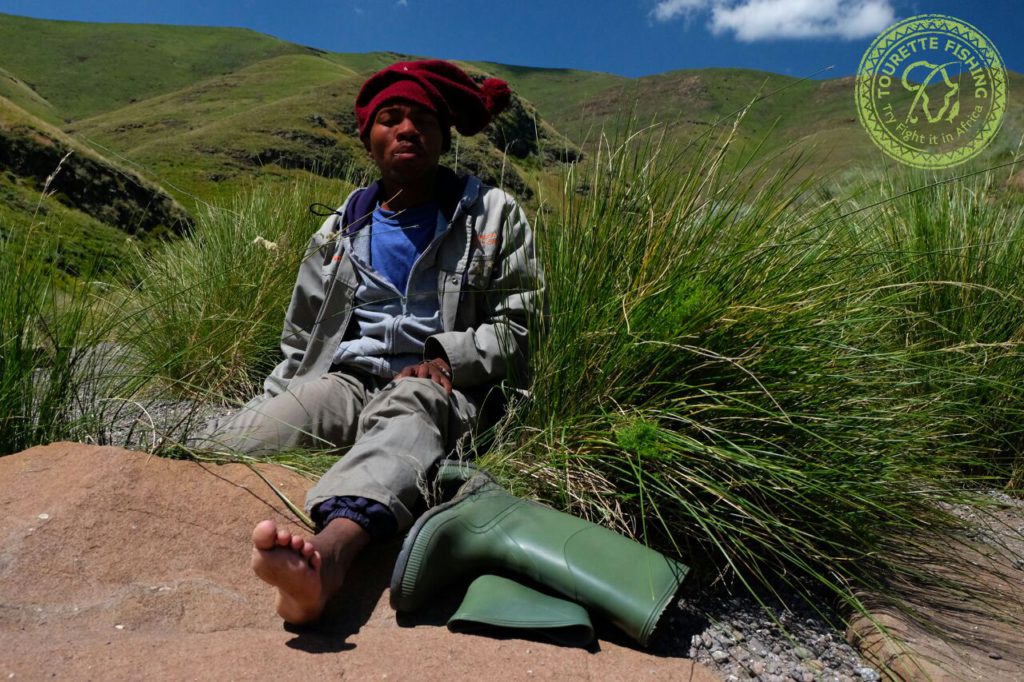 Guide’s tip of the week…

Let’s go fishing. When the conditions get tough try different things, it will make you a better fly fisher. You might not succeed at catching that illusive fish, but you will definitely learn something new.