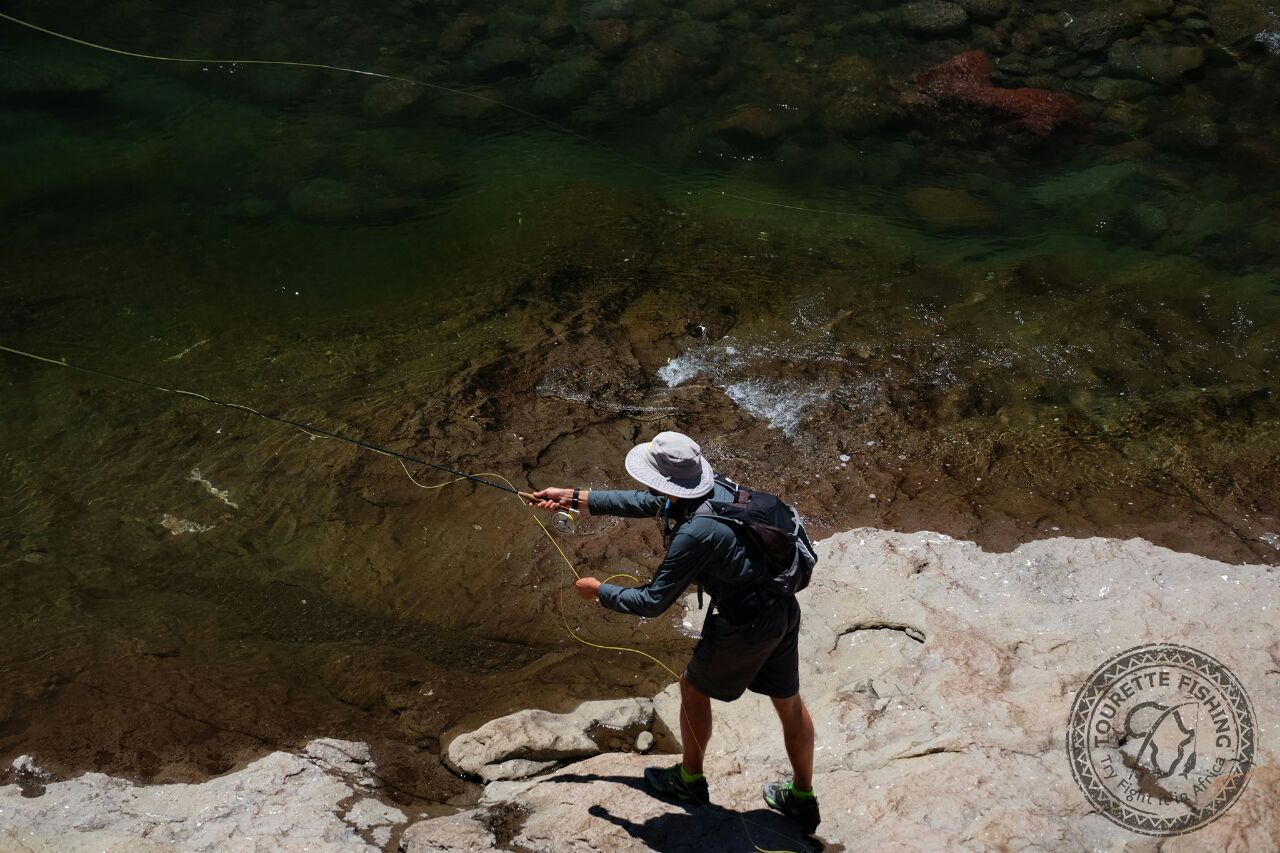 As far a fishing trips go this one was probably one of the most enjoyable and memorable ones that I have ever experienced. Guiding these gentlemen in one of the remote corners of Africa was an absolute pleasure. The Fitzsimons twins, Matthew (Matchu) and Rodger were joined by the Macduff brothers, Andrew (Mac) and Duncan. These boys were expecting tough conditions (the weather forecast was gloomy), difficult fish and hiking food, but what they experienced in the backcountry of Lesotho went above and beyond their expectations.

As the first light cracked over the hills our muleteers arrived with the seven donkeys that were chosen to take on this journey with us. A thick cloud bank was crawling towards us as the donkeys were being strapped up and the fear of a rainy trip was getting more real. 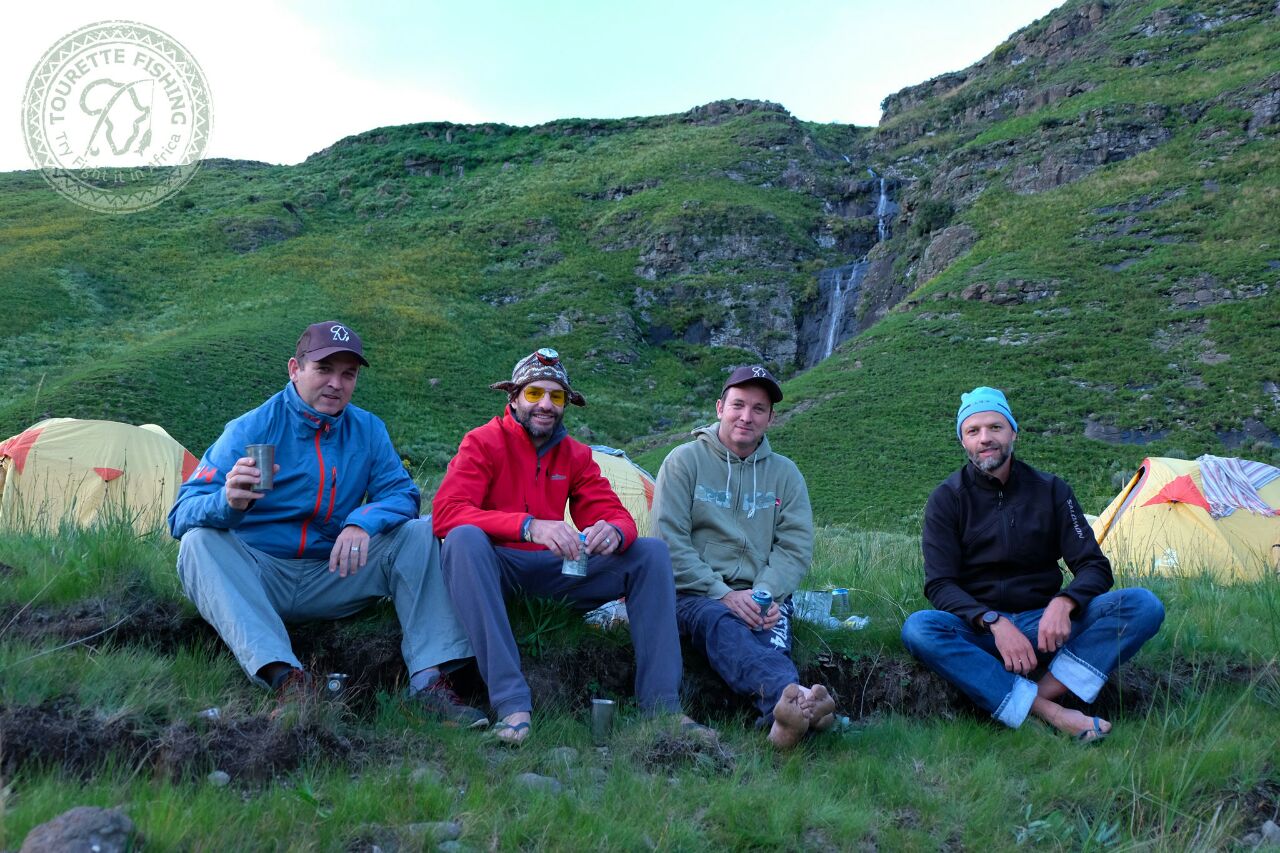 Wave after wave of spitting rain raced through the valley dressing up the mountains in sheets of grey. With every bend of the river we felt more isolated. The scattered villages along the way were the only occasional reminders of the civilization we were escaping.

Home in the backcountry of Lesotho

We made good time and within three hours we reached the long awaited first day camp site at Brown Cliffs. The sweat, aching bones, and sore shoulders were all worth it as we laid eyes on the willow-laced pools and gin clear runs of the upper Bokong.

We started off practicing casting, mending and you know, just getting rid of the rust. There was a lot of work to be done in terms of presentation and line management. The upper Bokong is not the kind of river where you can get away with sloppy casting or short leaders, but the guys were up for the challenge and soon found their rhythm.

As many of you would know, the purpose of these back country trips is to target trophy brown trout. That was the plan until we saw the sheer size and numbers of yellow fish that had made their way up-river. We were awe-struck. There were massive yellowfish cruising every pool, hunting just below the surface for floating terrestrials.

It was sight fishing heaven and despite the fact that there was a bit of rain during the night, the

river remained in absolute prime conditions. We teamed-up on both sides of the river, with one or two spotting from either side while one angler got a shot at a fish. This was buddy fishing at its best and shouts of excitement rolled down the valley as fish came up to eat their flies. As we made our way further into the wilderness the fishing just seemed to get better. The runs were clear and the fish were just waiting for flies to drift over-head.

It was a real team effort and no fish was caught without being sighted first.

The boys became so riled up that it resulted in

complete confusion for the poor angler as everybody would shout different directions. It was complete chaos! I had to step in a get them to relax so I could do my job, I was there to guide after all. Once we sorted out the communication glitches the fishing went wild. Cast after cast fish would come up and smash their flies off the surface and the crowd would cheer like wild animals as the lines went tight.

A typical guiding scene would go as follows: Me, “There is a huge fish at 11 O’clock swimming towards 12 O’clock. Get ready to cast! It is about eight meters out and coming towards you. Can you see it?”

Crowd, “Yeaaaaah wooooohoooo!!! Well done boet! Yes! Don’t mess it up!” and so on.

Team Photo in the Backcountry of Lesotho

Our second campsite for the trek was at Angel Falls, one of the most beautiful campsites on the river. We decided to spend two nights at the Falls instead of heading up to Camp David. This allowed us to work the water much more 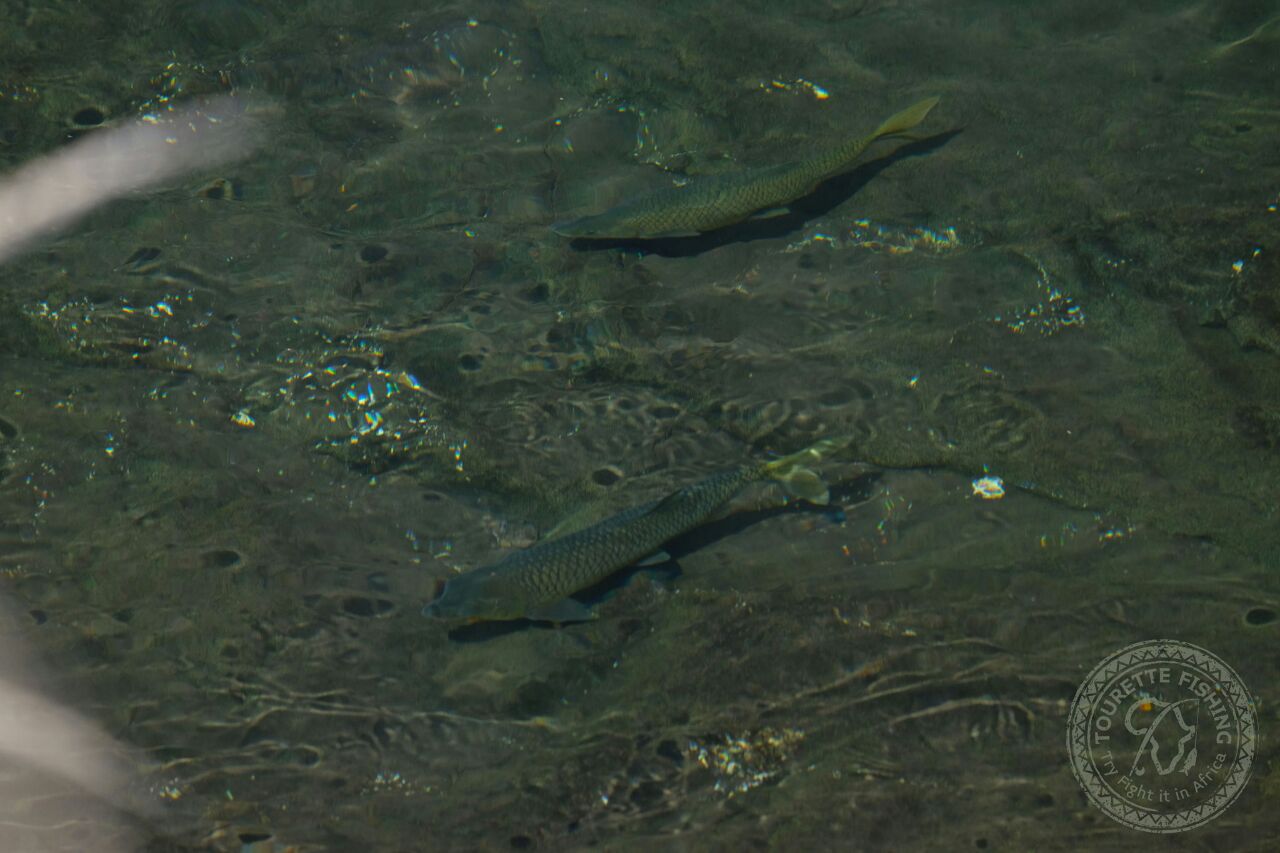 thoroughly and maximize our opportunities.

The 4 km of river between Brown Cliffs and Angel Fall took us past some of the best yellowfish water in Africa and we made sure to fish all of it. It is safe to say that minds were properly blown by the quality of the water and the fishing opportunities.

The food was also above expectation, especially

for Duncan who packed two cans of tuna in case of a culinary emergency. For the first time I packed an entire gas stove set-up for cooking (as opposed to out standard hiking fuel stoves) and this made cooking much easier and also afforded me the opportunity to make some really tasty meals. Tjops and Pap, Ham Alfredo, Pasta Bolognese and Steak stir-fry were on the menu, and to Duncan’s relief we didn’t even have to open his tuna supply.

We had almost forgotten about the big browns, but snapped back to reality when Rodger dropped a brownie of about 5 lbs just below Four-ways

Kraal. Although it was a mighty loss this didn’t seem to bother the team to much. They were more than content with the staggering amounts of yellowfish.

On the morning of our fourth day, Matchu ran back to camp (a sold 3 hour 25km mountain jog!) in order to make it on time for his son’s birthday. Now that’s what I call commitment.

Plenty of willing yellows in the Lesotho Wilderness

The rest of us made our way back down to the first day camp site to fish the waters below Brown Cliffs and to shorten the hike out on the last day. The water was perfect, so clear that the fish 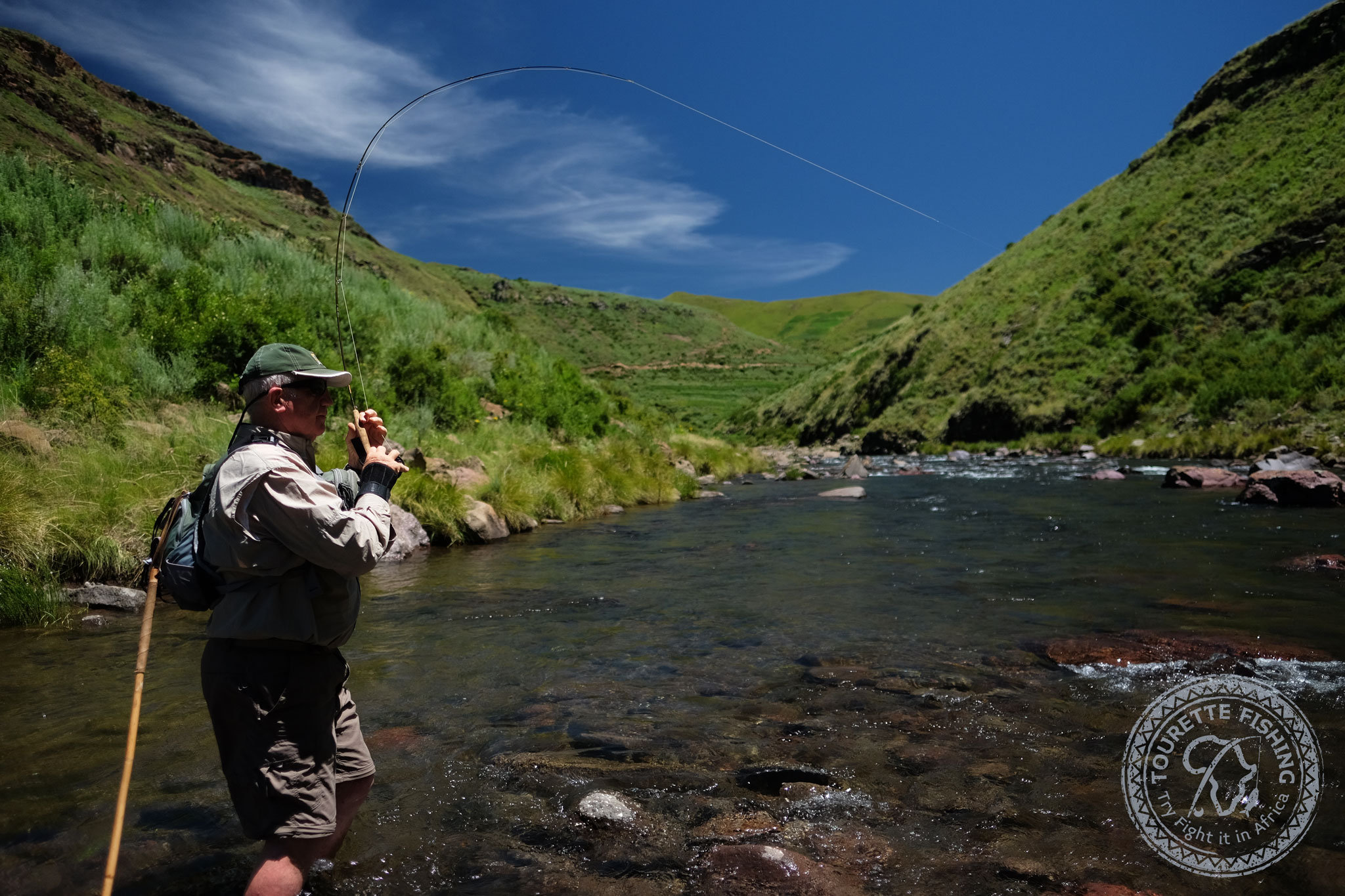 seemed to float in mid air. To make things even better, they were on the feed. It was a near perfect day, the only misfortune was when Mac slipped down a 3 meter cliff and broke his rod. The rod was a small price to pay in light to the fact that he didn’t even get a scratch. Thankfully his fast reflexes and agility saved him as he found his feet halfway down and managed to run his way out of disaster. It was also the first day that we carried a spare rod, how is that for luck?

seemed to float in mid air. To make things even better, they were on the feed. It was a near perfect day, the only misfortune was when Mac slipped down a 3 meter cliff and broke his rod. The rod was a small price to pay in light to the fact that he didn’t even get a scratch. Thankfully his fast reflexes and agility saved him as he found his feet halfway down and managed to run his way out of disaster. It was also the first day that we carried a spare rod, how is that for luck?

On day five we hiked out of the valley and back to camp feeling like we had just conquered the world. We finished off the trip with one last session in front of the old camp where Mac landed his best fish of the trip. Like clock-work the rain finally came that night and the clear spell

of the past four days was over.

In retrospect I don’t think this trip could have gone any better. Despite the gloomy forecasts, we hardly had any rain at all, the water was in the best condition that it had been in over a year, the food was good and the fish were loose.

I had a team of great fishermen, who provided endless laughter and good banter. Although the big old browns out-smarted us things were pretty much perfect and if I could do it again, I would go back up the Bokong River with these gents in a heartbeat.

Tip of the week-

Buddy fishing; get your mates to help you spot fish for you. It will not only help you to catch bigger and more fish, but it is also very special to share your success with your mates. Fishing should never be a competition, but an enriching experience for all the parties involved.

Although this fly has been featured before, it deserves another mention. This destination specific fly is a complete game changer when it comes to yellow-fishing.

It has all the key features of a flying-ant and is irresistible to the yellows, in fact more than 90% of all the fish caught on the trekking trip was taken on this deadly fly.

Coming to the Bokong? Be sure to tie a bunch of Balbyter. 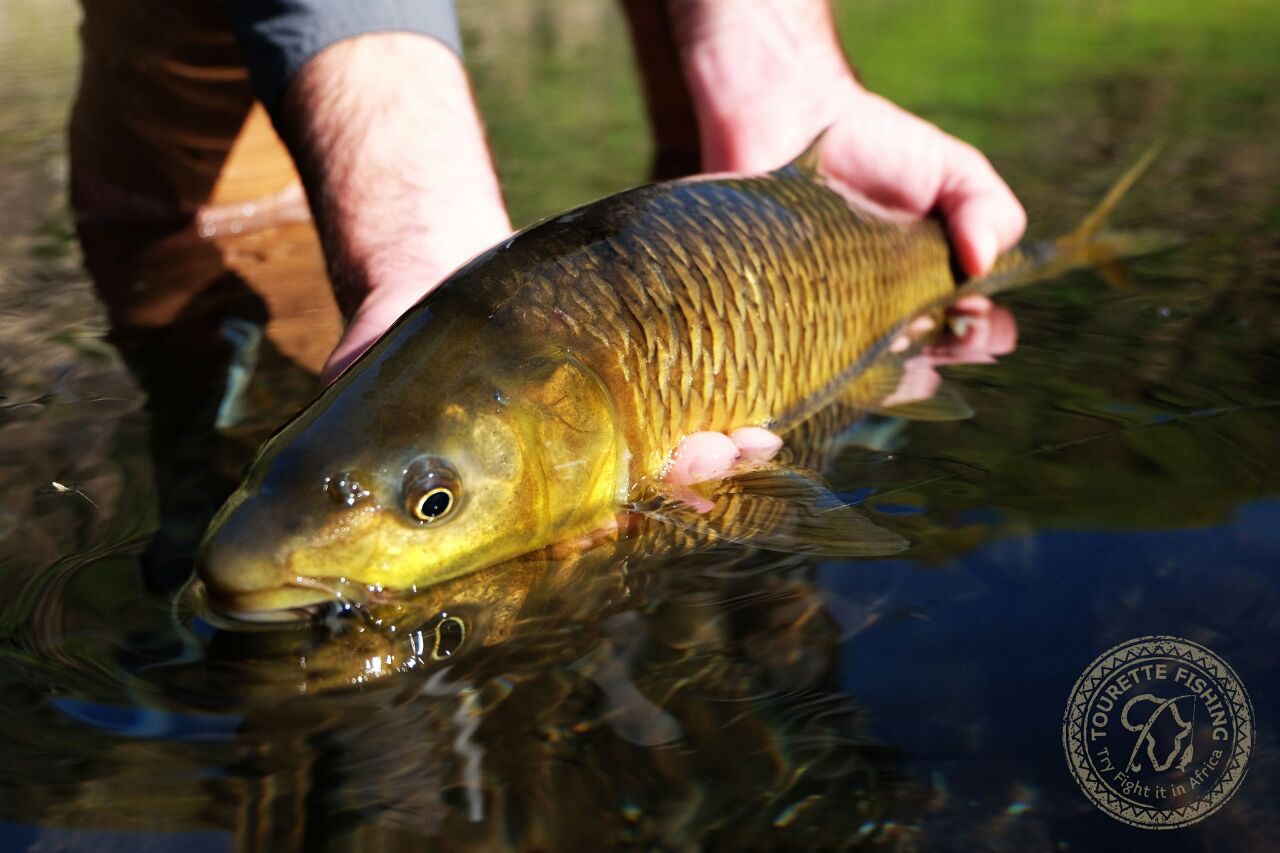 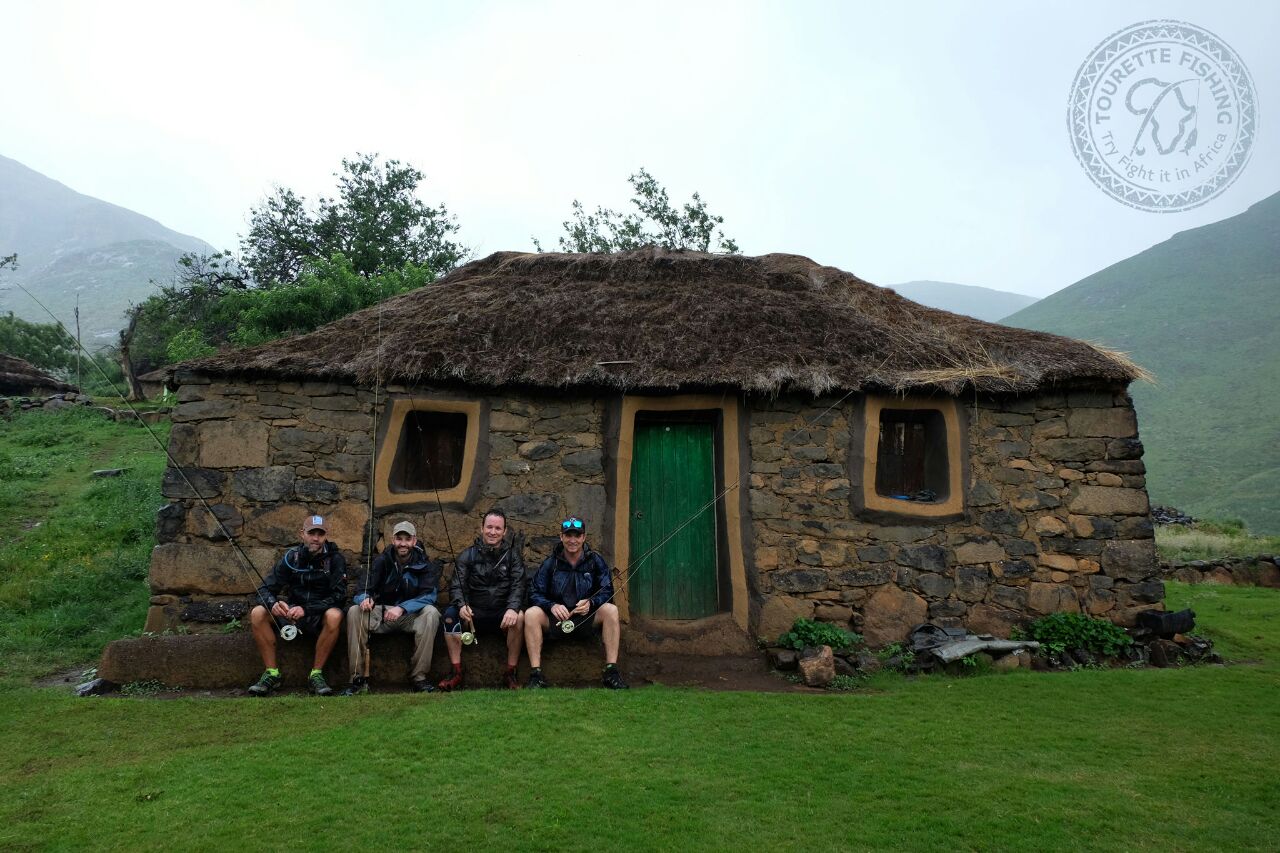