The Orange River, an endless ribbon of beauty snaking its way across almost half of the country. Her size, power and flare is forever noticeable. Not only does she boast with unreal scenery and breath-taking views, but offers us gold straight from her waters. This gold is what inspired weeks of planning, days of prepping and 15 hours in a VW caddy packed to the rafters.

The start of the Kalahari Largemouth season saw father and son combo Lawrance and Jono, Steve (who drove 1200km from Pretoria on a bike) and Johan Khun, a Tourette fishing veteran trying out our new destination. None of them had caught the elusive largemouth yellowfish. With spirits high and excitement levels soaring the game was on.

Morning one marked the start of our four night drift trip into the mighty Orange River Gorge. A boat to each person with all his gear strapped down tight with the idea of encountering some white water. Max and Hein (our river guides and chefs from Gravity Adventures) had everything including the kitchen sink stacked and tied down to their boats. A remarkable sight to see an inflatable raft packed up to your chest in gear and equipment. One last safety briefing, a team photo and off we went, a drift into the desert. 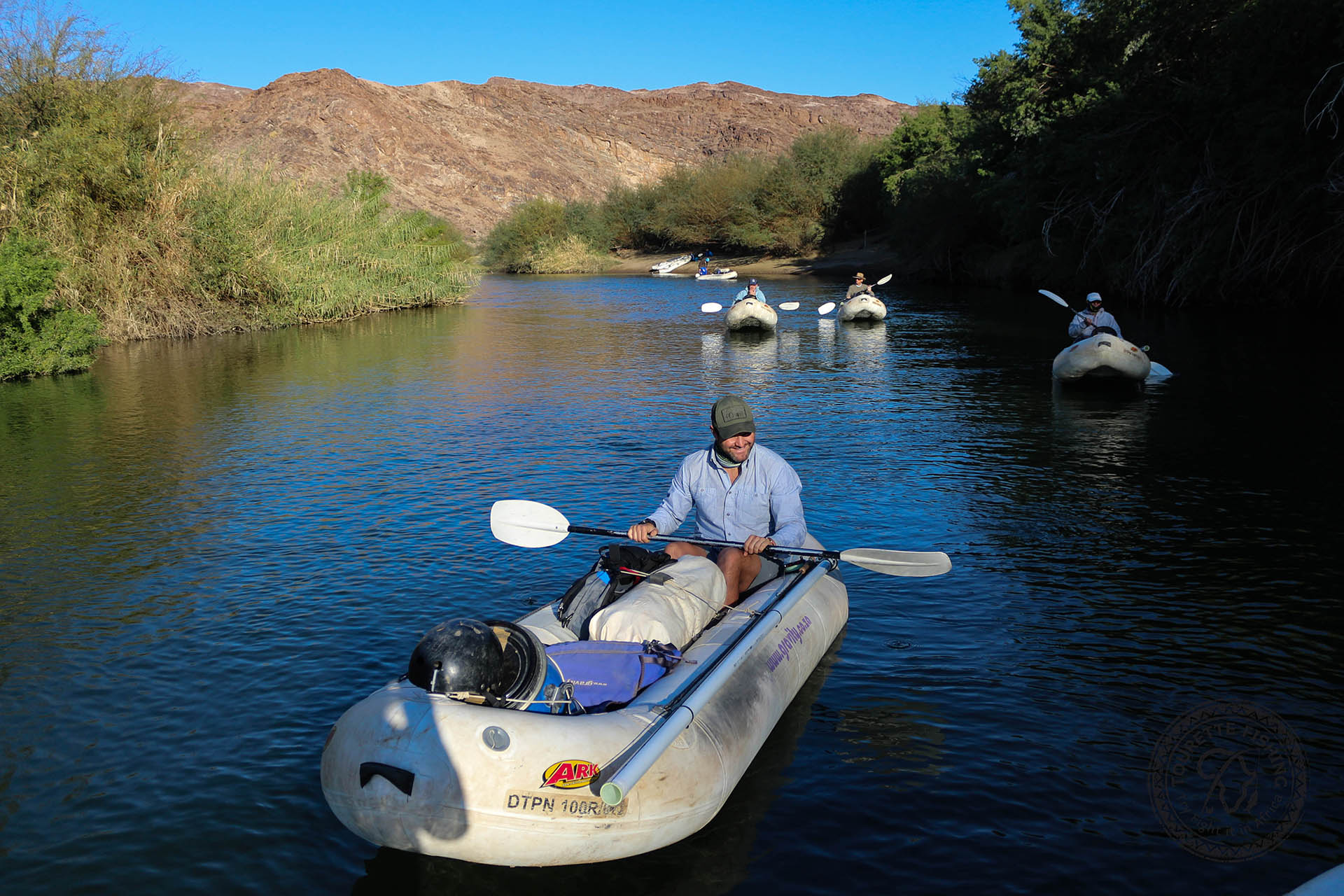 The team heading down the Orange River in search of Largies. 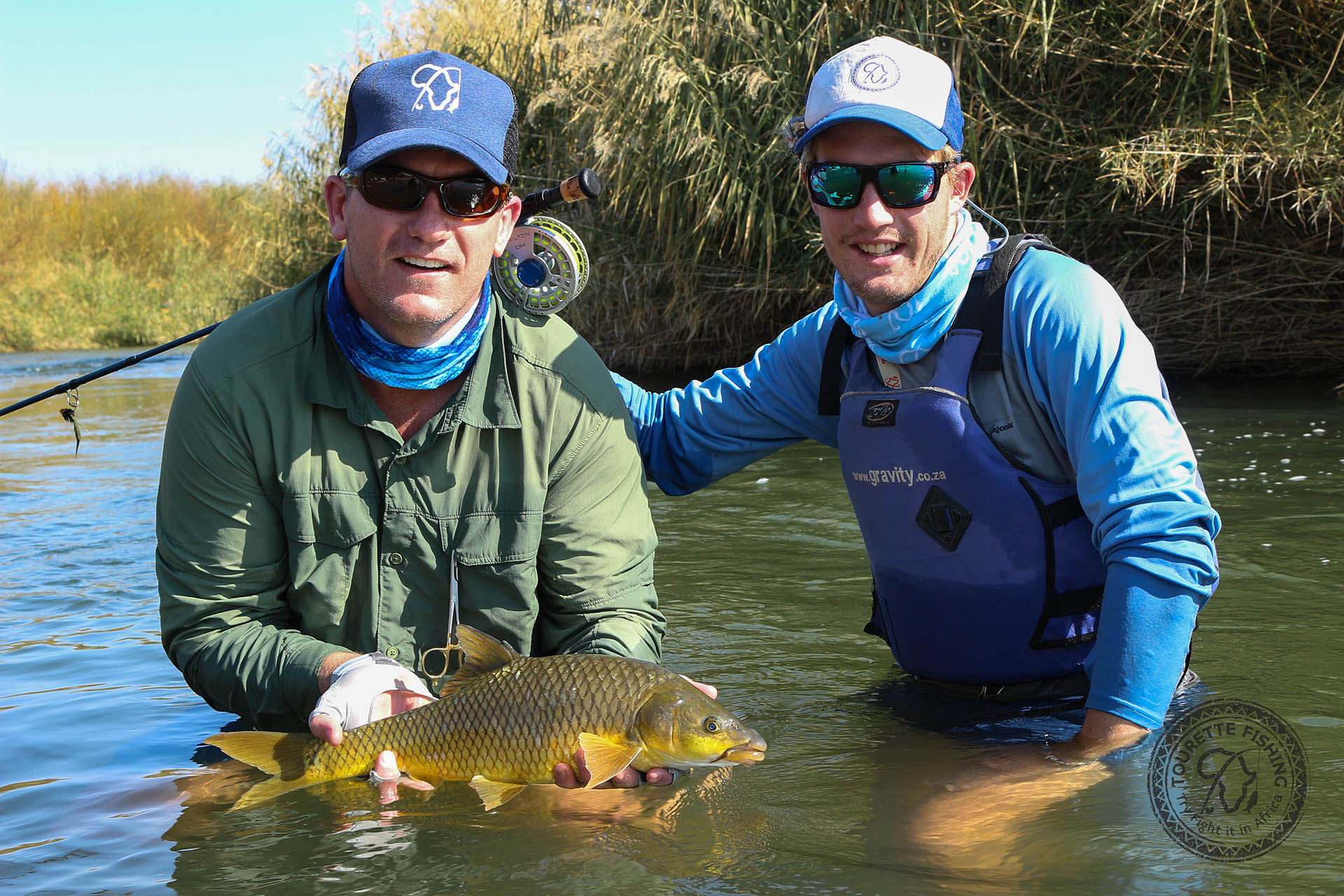 Steve with his sight fished smallie, his first fish of the trip.

A warm up 3km paddle to our brunch spot gave the guys a chance to get used to handling the boat. After a filling brunch it was time to start the thousand cast game for Largies. These apex predators are old, wise souls and are known to be a challenge to catch. Lawrance got off the mark with a quick smallmouth yellowfish on an MSP followed by a foul hooked muddy in the tail that gave him false ideas of a trophy largemouth. Jono landed the first Largie shortly after this. Swinging a super natural baitfish pattern off a rocky ledge in a slower, deeper channel resulted in a healthy 8lb largie screaming off. A special fish for Jono and Matt (TF Guide) who were both new to the Orange River.

The rest of the day was spent fishing and slowly drifting towards our first night camp. Steve caught a beautiful smallie that was holding in the shadow line of some reeds in a narrow run. After casting tight onto the reeds and swinging his fly from the shadow into the light, a dark yet golden shape rushed out after his fly and began to chase it down. After two hit and misses, with the fish now meters in front of us, the smallie continued to follow and till eventually accelerated up and smashed the fly. A good solid fight, with smiles all round. Although not our target species, a sight fished scenario like that is always welcome. The guys fished hard for the rest of the day and were now grasping the concept of swinging flies and the most important thing, strip strike! A few eats were encountered however only smallies seemed to come to the net. Scorpion Camp site was where we spent night one. Laughter echoed the apocalyptic landscape as we replayed the day’s events. One particular laugh was Steve’s great display of falling out of his boat and going for a refreshing swim . . twice!

Coffee and rusks with a chat about the days plan was the start of morning two. After a quick pack up of the camp we were ready to move. Scorpion rapid was our first challenge of the day. A small yet technical rapid that required full concentration. Jono took over Steves duties by showing us how to successfully swim an Orange River rapid! Max and Hein were quick to pick up the pieces and get Jono back in his boat. Shortly after we were on the move again. Our fishing began on a very long, slow moving pool holding big exposed boulders, which is good structure to fish around. Johan fished the top end of the pool. After catching a smallie with a short cast on a MSP, Johan then put a longer cast in and on the swing picked up his first Largie. A young 4lb fish that hit Johan like an absolute bus to get him off the mark. There was much hope for a bigger fish because following Johan’s Largie, for the majority of the fight, was an even bigger on boasting a bucket as big as two fists. The site of this caused much excitement and anticipation as no longer was the idea of a 20lb fish a myth from the guides. After a hearty scrambled egg, bacon and heap loads of toast we headed to our second campsite. We drift fished our way down but unfortunately were denied any eats from our big mouthed friends. Lawrance cracked on with the smallies taking favour to the black MSP with a bright orange bum. It was great fun seeing these inquisitive smallmouth yellows aggressively eat baitfish patterns on the swing. Lawrance managed to land two smallies in the bird alley section. The rest of the mid-day was quiet.

We ran one last Rapid called Mini Falls, with no spills this time, before arriving at Trees campsite. We arrived with a few hours of daylight to spare which allowed us to take a short hike into the top section of the Gorge that had seldom seen people. This was evident when Jono and Matt came across an otter that couldn’t quite identify what or who they were. Swimming five meters in front of them,and carrying on like they weren’t even there, gave the two a very rare and special siting. Steve and I fished just below them and got stuck into a fat smallie that ate right under the rock we were standing on. Steak and cauliflower salad put the team to bed early as the dreaded portage was upon us the next morning.

The unexplored top section of the gorge that we hiked to. 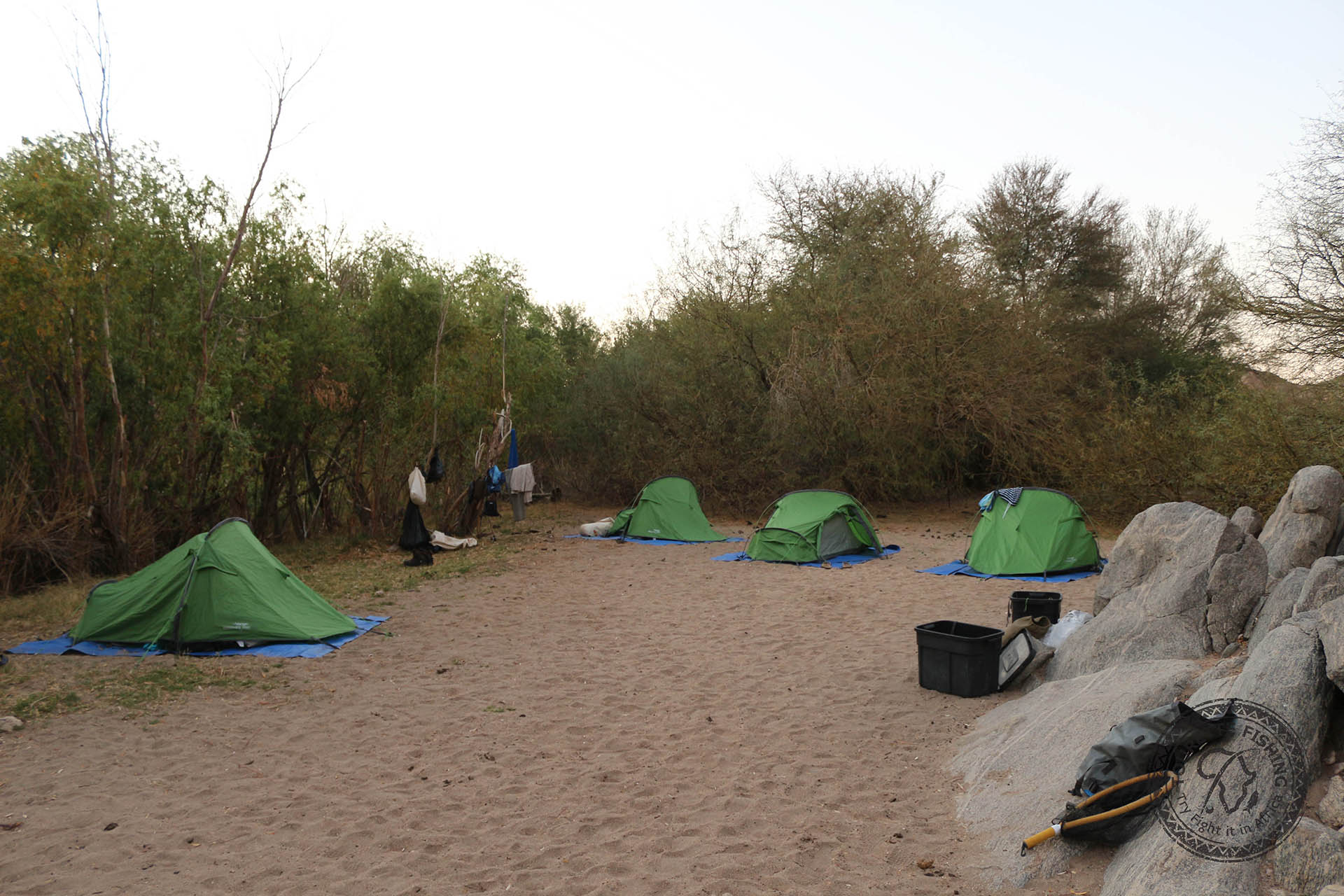 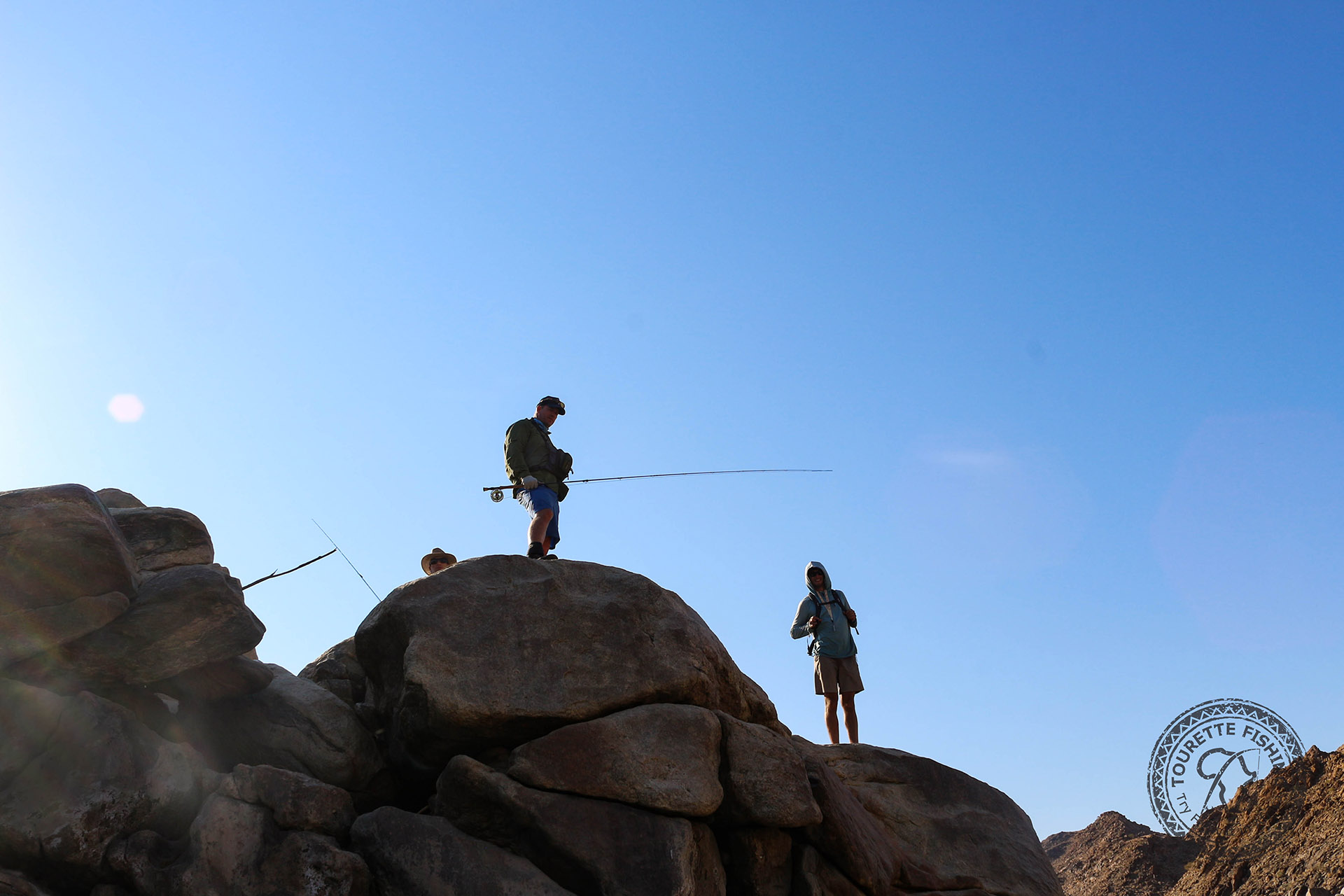 First look at the gorge, love at first sight. 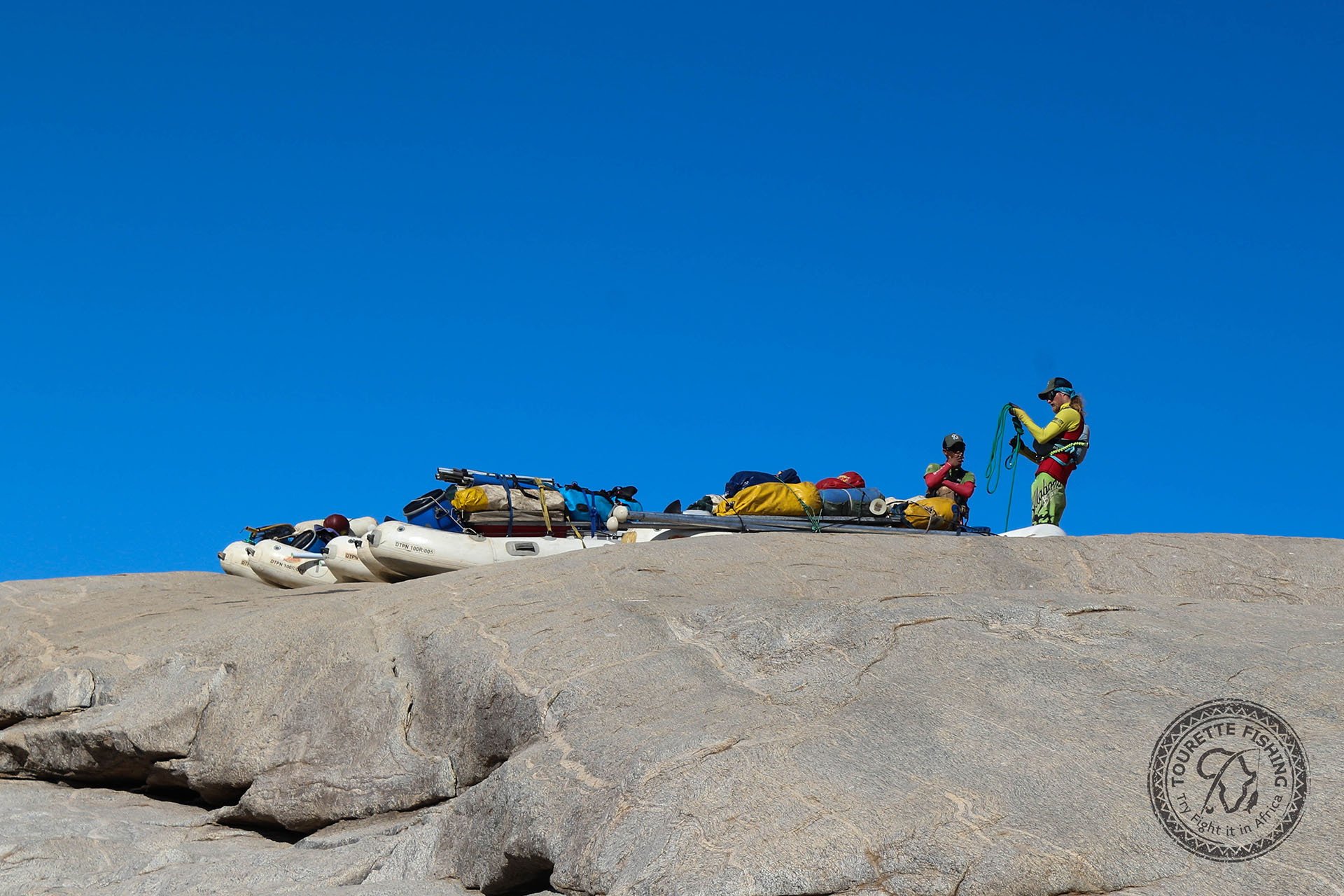 Max and Hein preparing ropes to abseil the boats down to myself and Matt.

With first light, a quick cup of coffee and a bowl of fruit salad, we packed up the rafts and heading to the portage site. Talking about this colossal event makes one fatigued, so just know that we spent the next 45 minutes lifting, dragging, dropping and heaving the eight fully loaded rafts to the edge of the gorge (in radical Kalahari heat).

The sight of the gorge gave refuge to the portage. With potholes the size of putting greens 30 meters above the water level, the power of the Orange River was truly visible. The fishing team continued down to the gorge and began fishing, while the guide team began the gruelling task of abseiling the boats down the sheer edges of the gorge walls. Jono landed a busty smallie caught in a deep narrow gate, while Johan unfortunately got broken off by what we believed was a big largie. With the visibility being so good, we had to drop down to a 12lb leader which of course created a catch 22 situation, big fish-light leader. 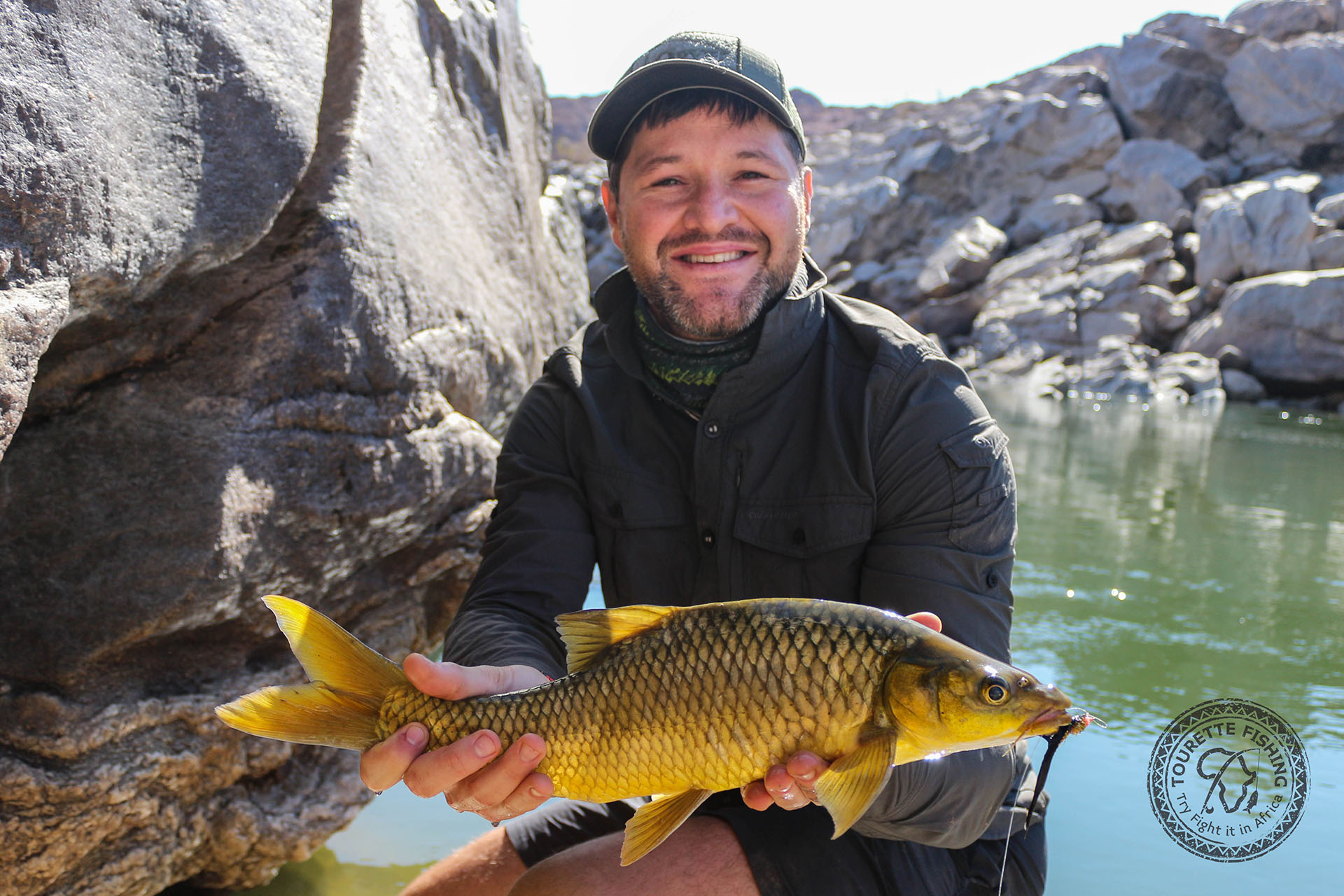 Jono with a golden smallie caught in a narrow gate in the gorge. 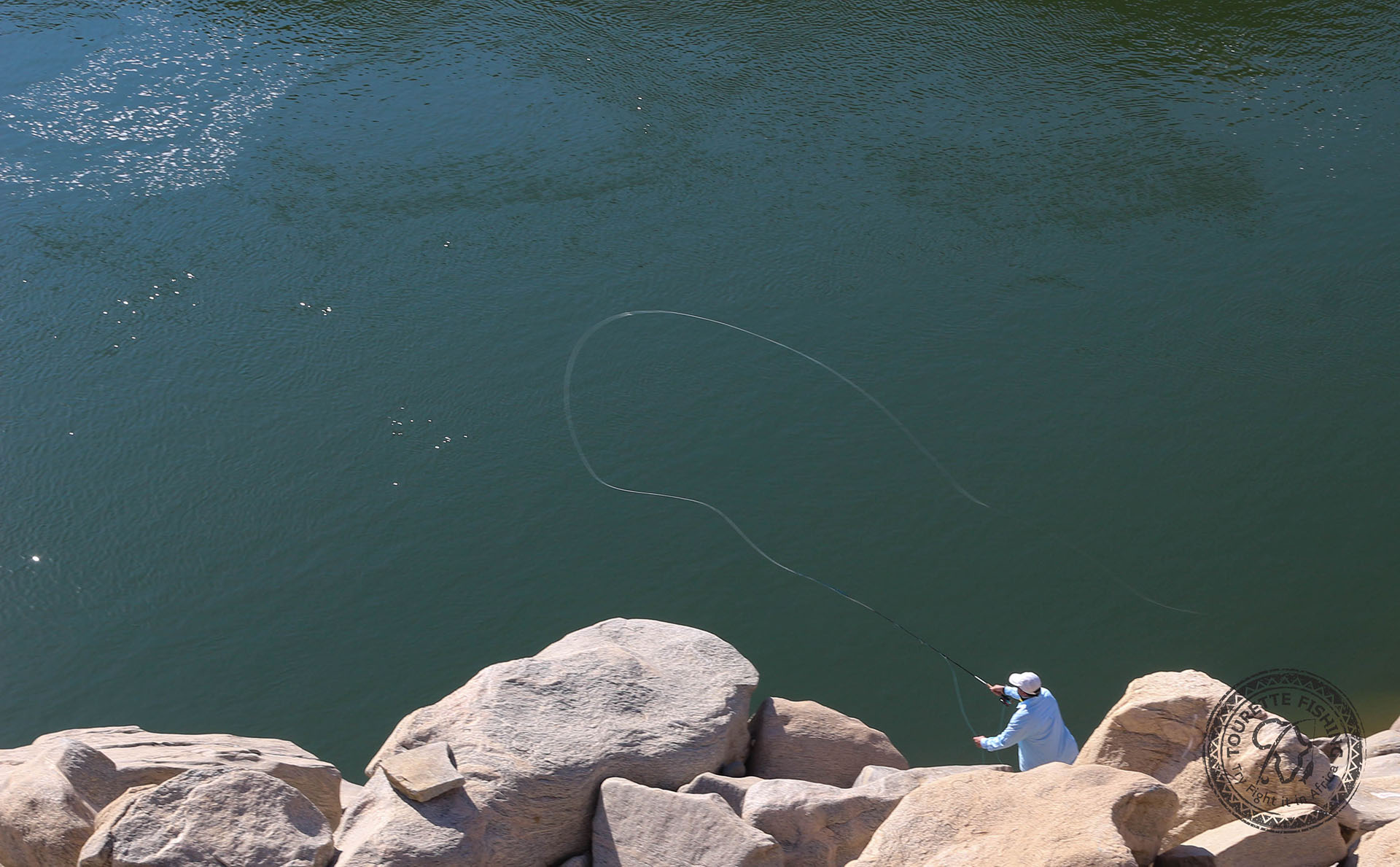 Lawrance sending one out into the deepest darkest. 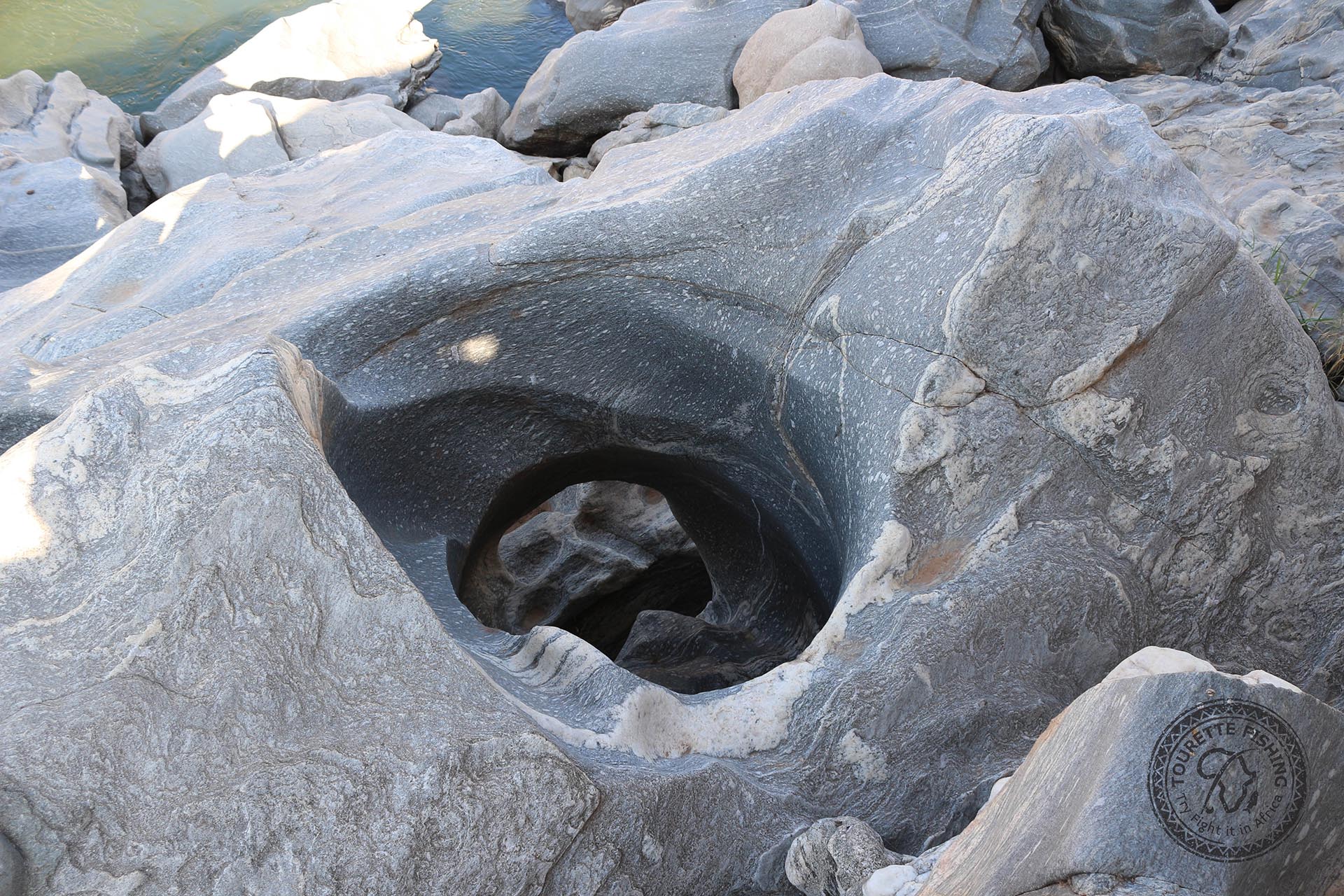 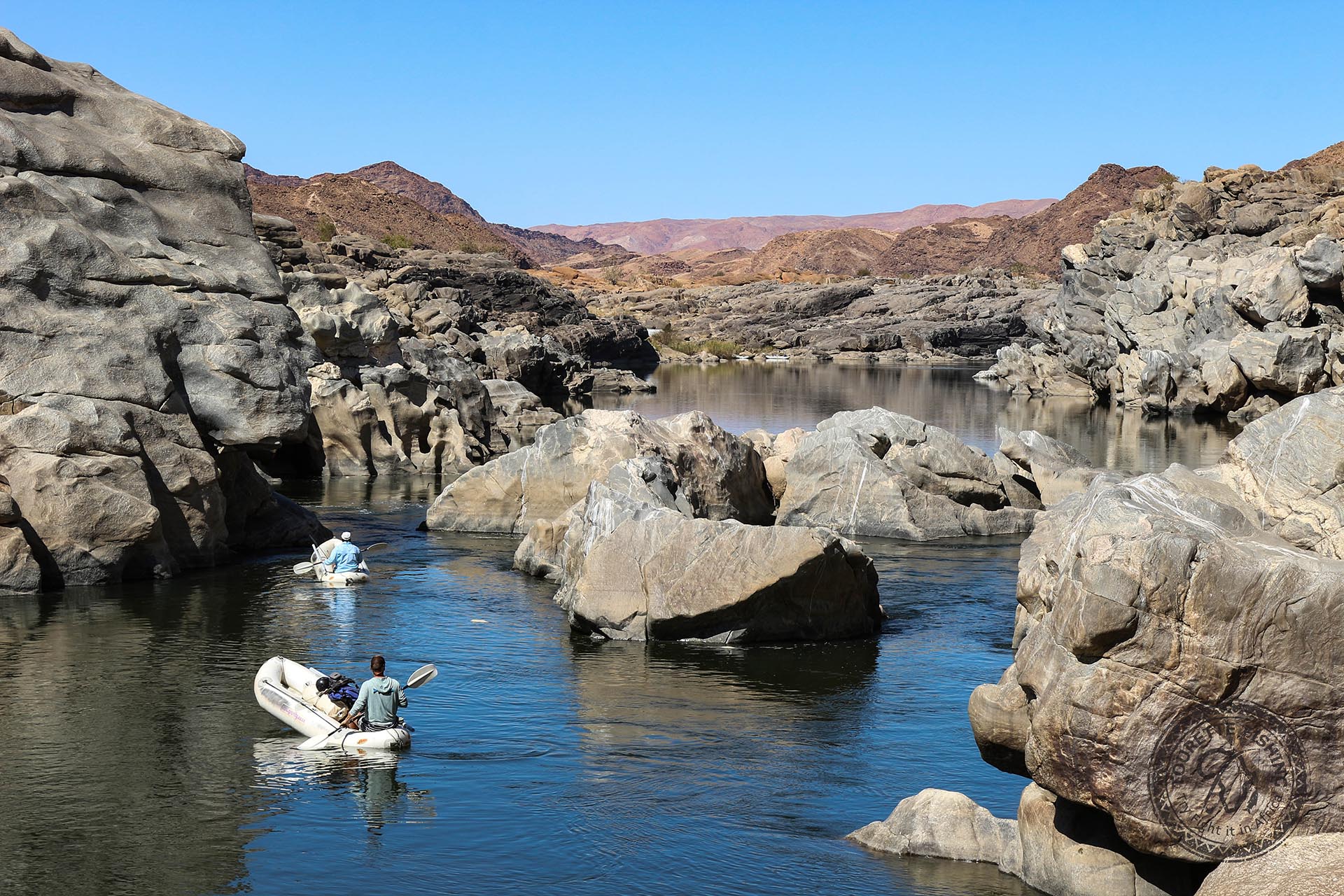 “The gates of Mordor” 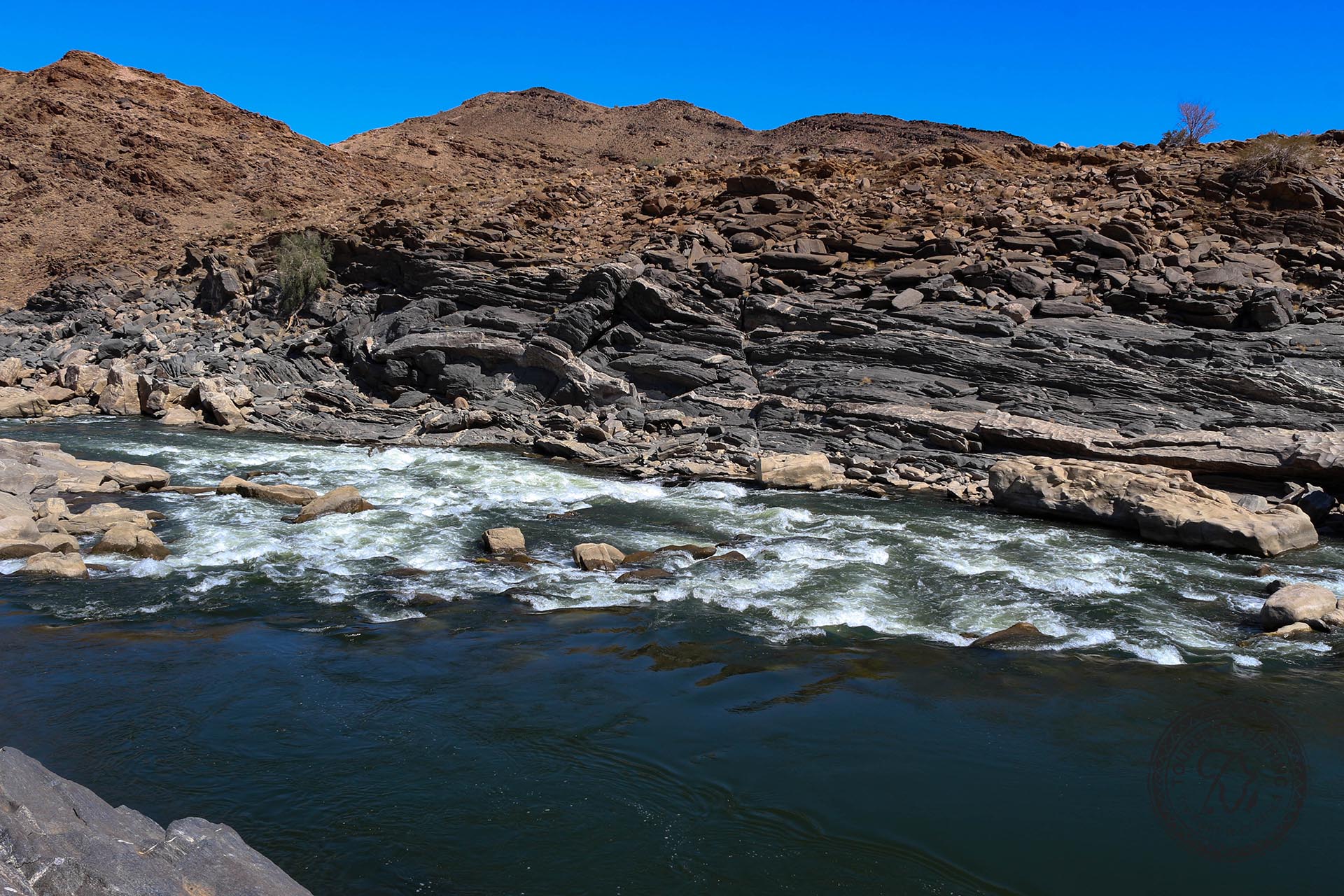 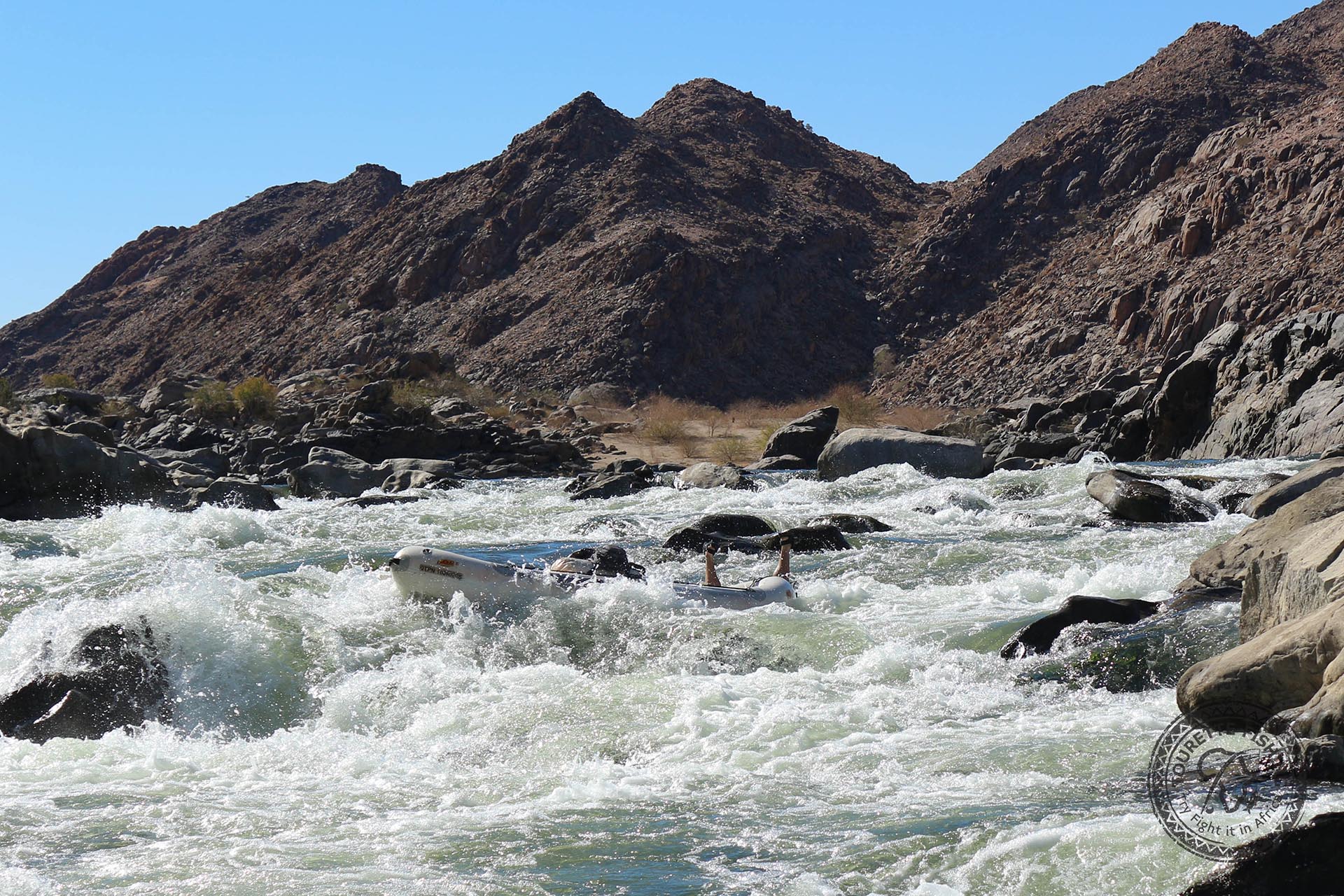 Johan with an impressive display of acrobatics.

The final day saw us slowly making our way towards the takeout point. Fishing good looking water in between resulted in Johan landing a feisty 7lb largie that gave him the satisfaction he was after. There was joy all round as the fishing seemed to be turning on. Jono had two nice takes after brunch, but unfortunately couldn’t make them stick. We arrived at the take out point on time. Muscles sore, sunburnt skin but everlasting memories.

We spent our last night back at Red Rock River Camp (base camp) , reminiscing over the last five days. A memorable trip on an unbelievably section.

Until next time, tight lines 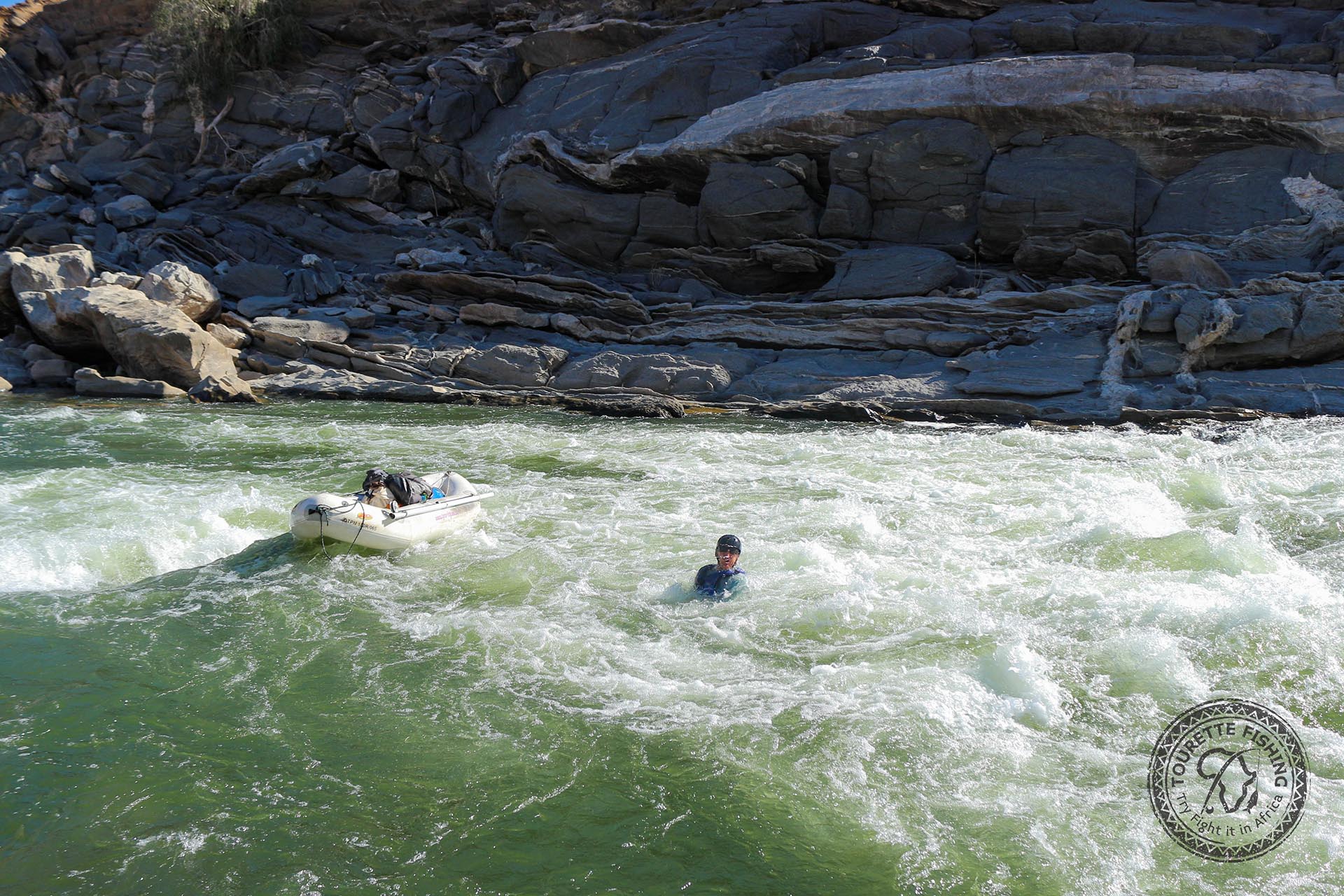 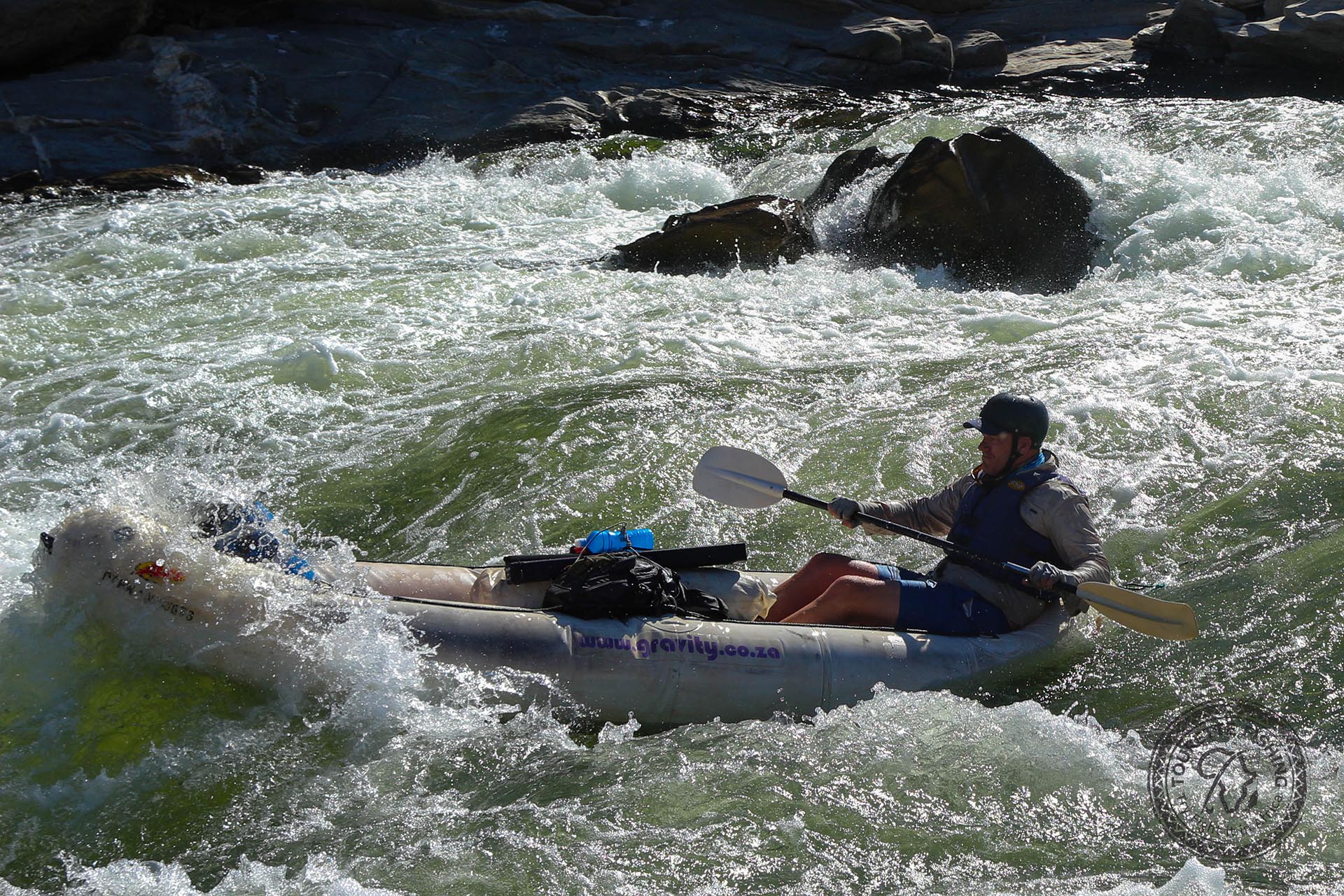 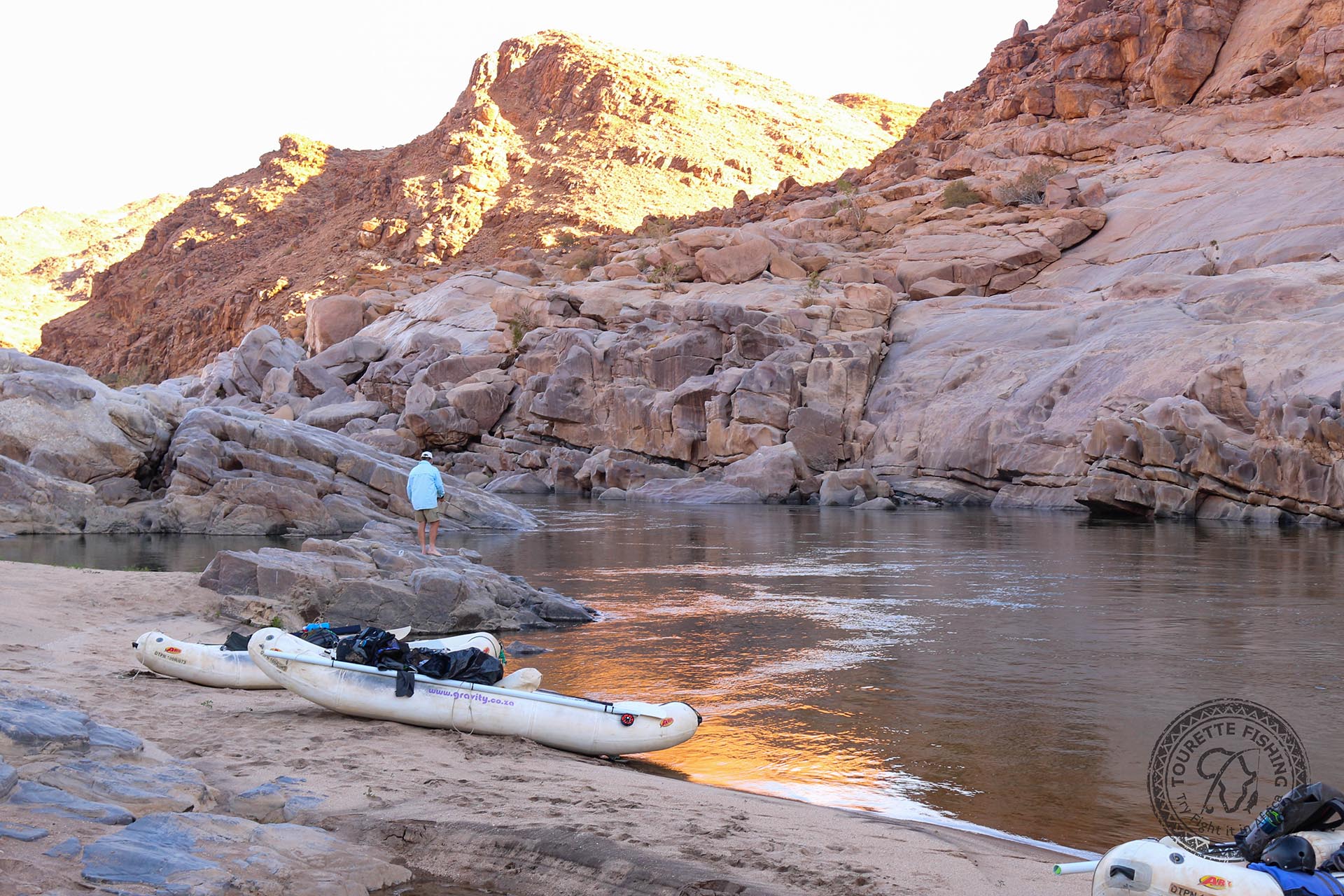 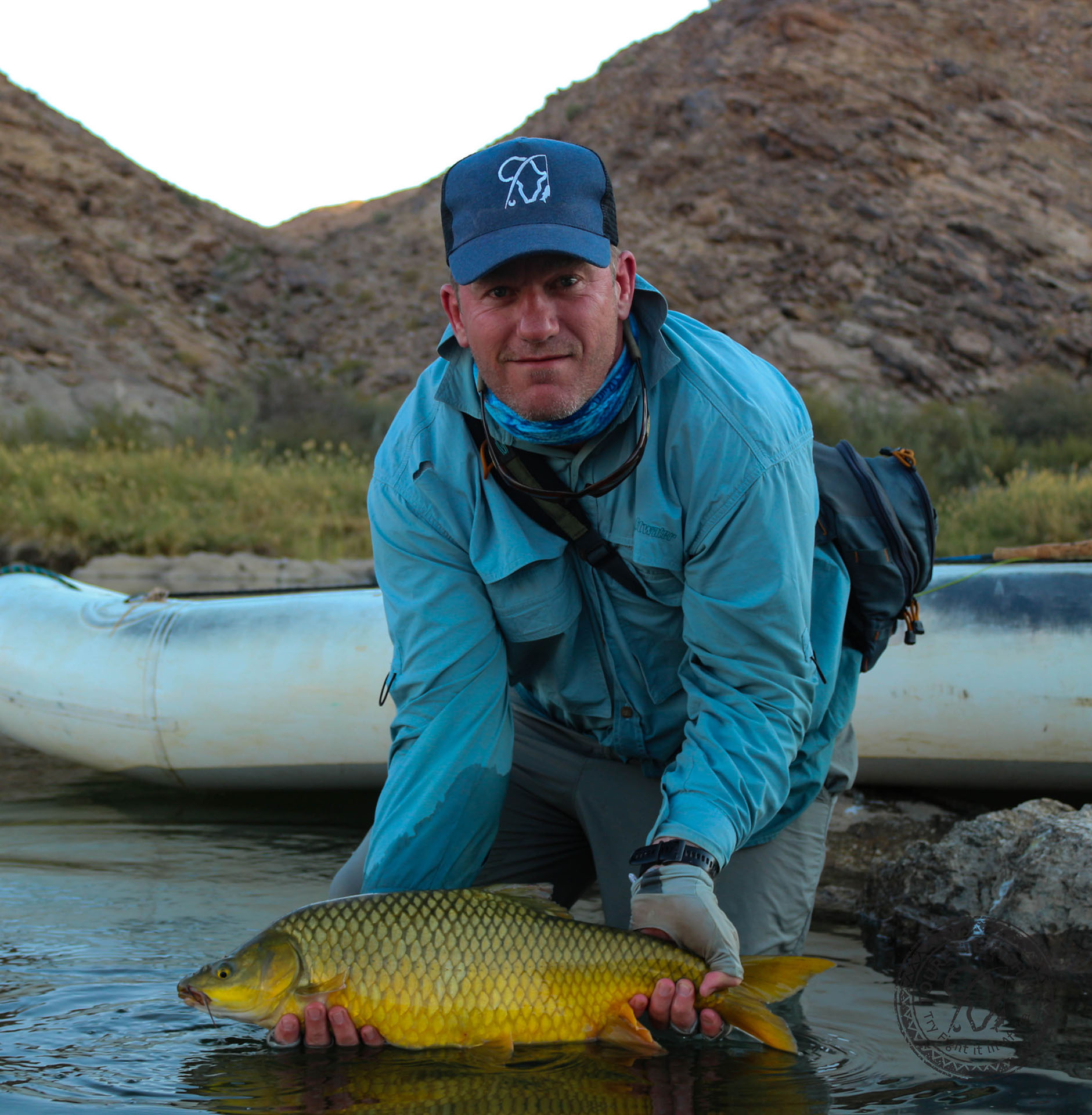 Steve with a very greedy smallie. 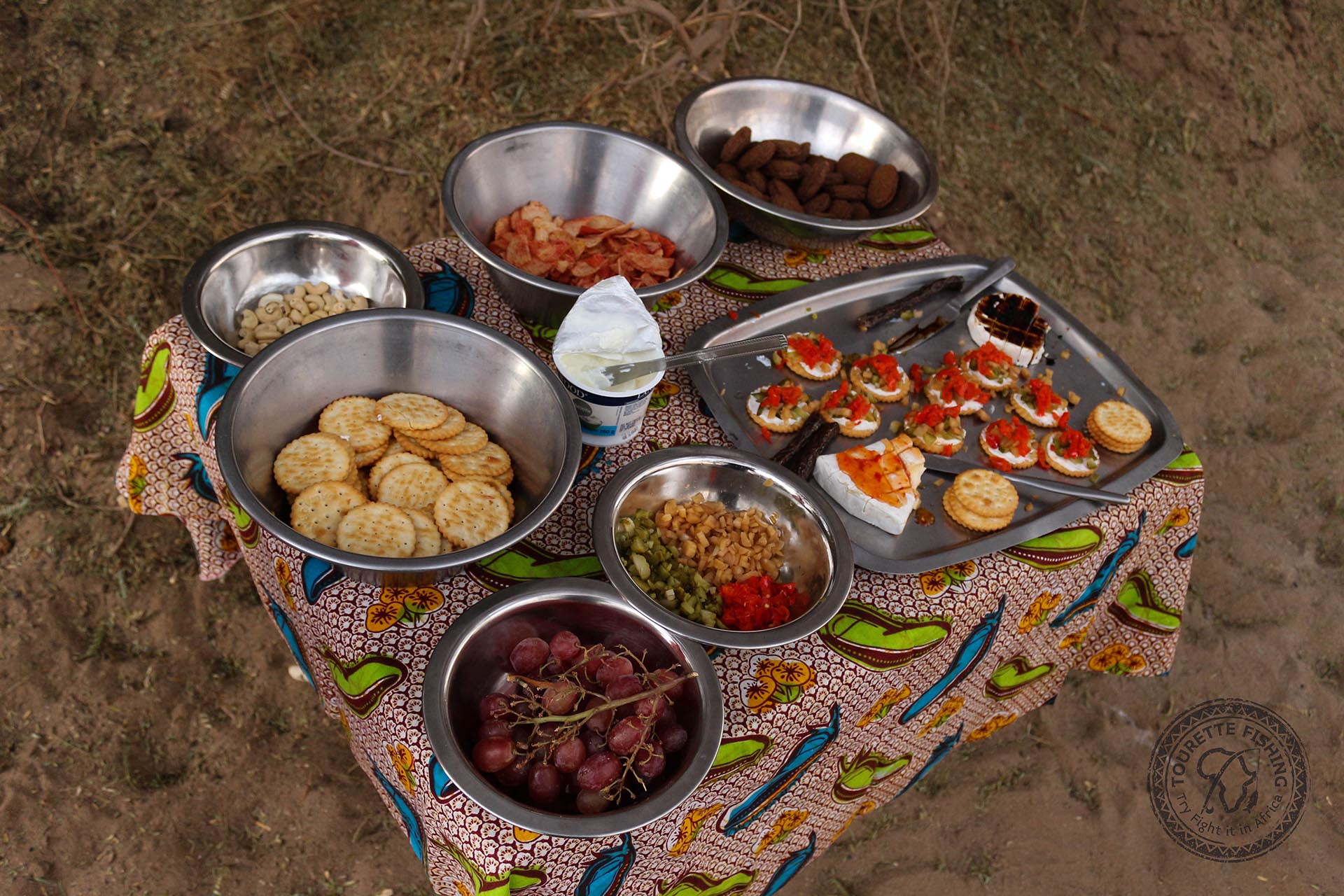 Much deserved snacks after a long, hot Kalahari day.
PrevNext