So for the final week of the season we were joined by 4 anglers from South Africa. Jay, Steve, Leonard and Jeff. They were teamed up by the duo of Ryan and Dave from Tanzania. The days leading up to the week were quite windy but after a nice week’s break, the guides team were keen to get going again and end the season off on a high.

The weather forecast for the week however looked grim. With a cyclone moving in over from Oman, it was clear that the week would be windy and that the fishing would be tough. The plan for the week was to head out north to Shambaia , spend the first couple days there while the weather was good. Then when the big winds arrived, head down to more sheltered Play Station.

So with no time to waste, the mothership headed out at first light on the first morning while we sorted out all the tackle etc along the way. Once within reach, everyone hopped onto the skiff’s and raced ahead. One boat heading to Merlot (looking for GT’s on tease and big Bumphead Parrotfish) while the other went straight to Shambaia for Triggers.

The weather seemed to behave but the fish did not play along entirely. The teasing off Merlot was slow and the bumpies weren’t playing ball either. They kept hanging in the surf, staying just out of reach. On Shambaia though thinks looked up. By mid-morning the triggers started to come onto the flat and by midday, the flat was flooded with both tailing Titan and Yellowmargin triggerfish. They weren’t planning on handing out gifts however and the lads soon realised that pinpoint accuracy would be the minimum requirement for the day. The guys persisted however and by the end of the day and a number of follows, Steve managed to land a very nice Titan. Hats off to legend South African vice maker Jay Smit, who persisted and manage to hook a big titan. He soon learned the power of these crafty fish though and got handled quickly. In the meantime the guys on Merlot went to the neighboring atoll where they managed to raise some GT’s on the tease. The guys worked hard and Ryan managed to end his day with a nice 70 – 80cm GT. 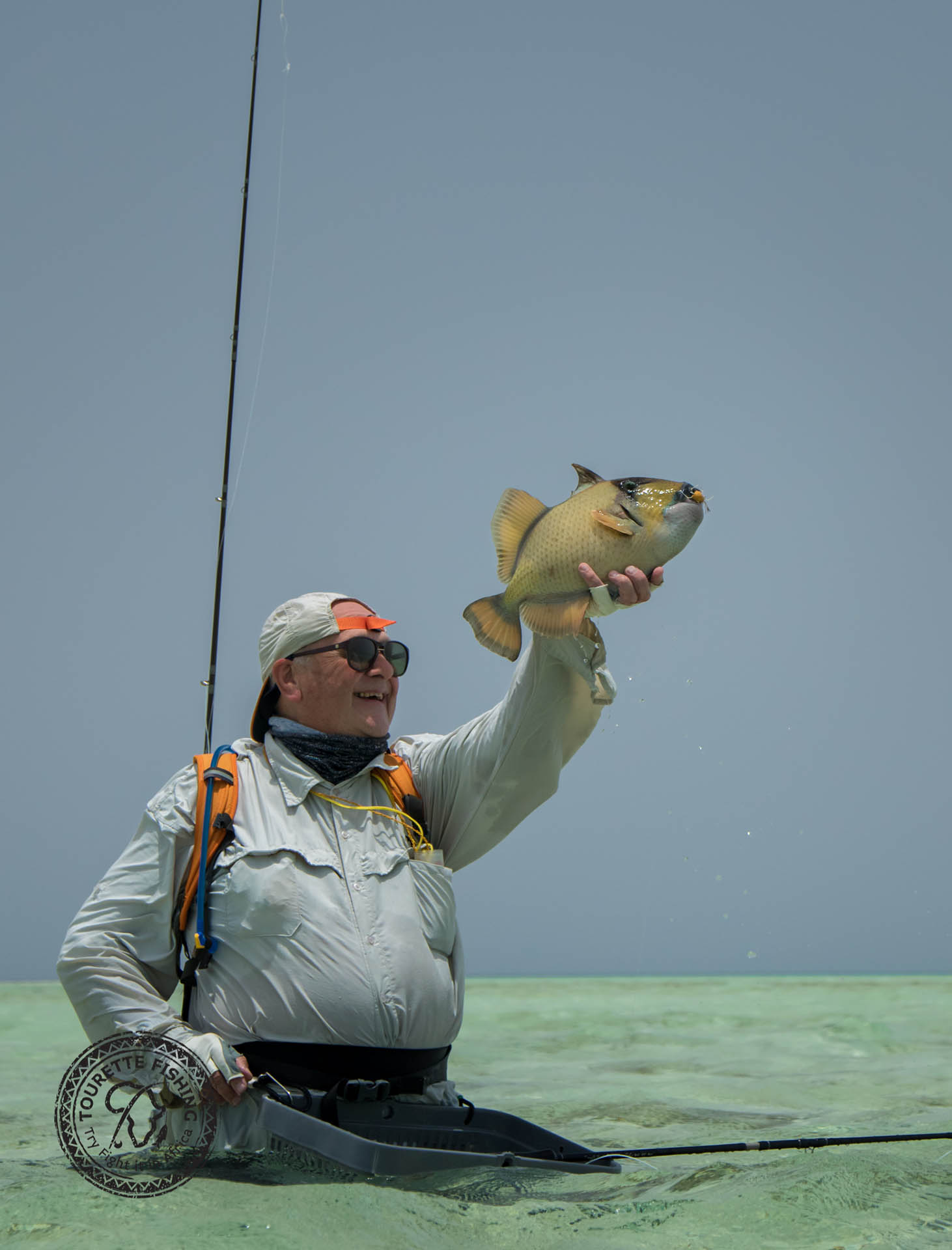 Steve was beyond exited when he landed his Titan Triggerfish 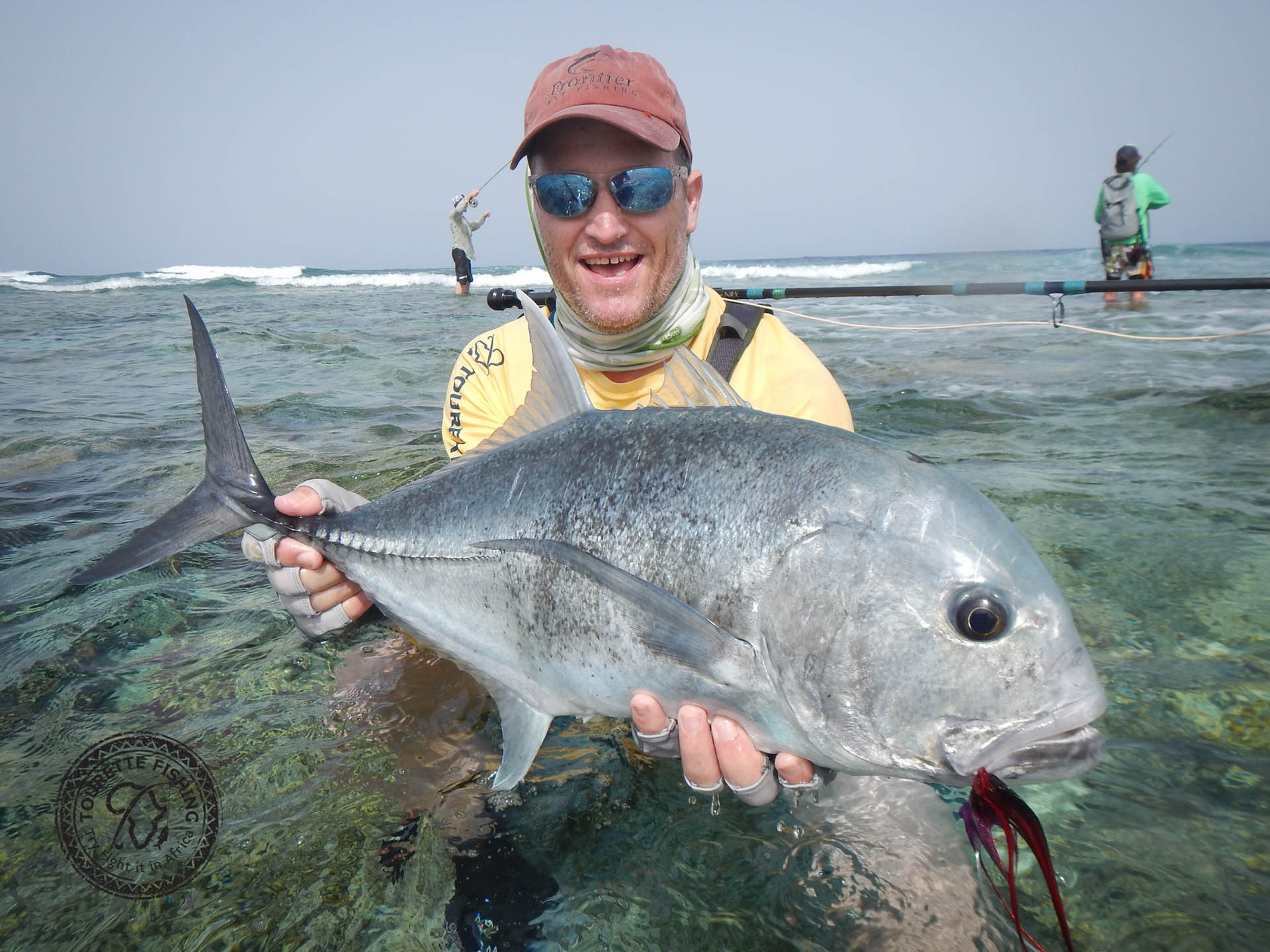 On the morning of Day 2 the wind was still absent but judging by the scattered cloud that was around, one could tell it was coming. The visibility was not so great at the start of the day so everyone started off with some teasing. One boat teased the reef close to Shamabaia before heading to the flat, once the light was better, while the other boat headed to Abington, looking for GT’s cruising over the atoll and do teasing off the edge.

On the big reef the teasing was slow but once the guys hit the flat, the fishing heated up considerably. As the day before, the triggers rolled onto the flat at around midmorning and by midday they were out in their numbers again. Leonard Flemming hooked into a nice trigger which got away right before they could land it and had a couple more descent shots. We also saw 6 really good GT’s but could not get a proper shot at them plus shoals of really big milkfish. The latter giving both guide and guest a proper fright! The sight of 1,5m blue shape cruising right towards you just after you sighted some giant trevally is enough to make any man suffer a severe case of buck fever.

The Guys on Abington weren’t having much luck with the trevally either. They raised some brutes and saw some GT’s cruising over the atoll. One that was so big, it had a shark trailing it. Not something you see everyday. Ryan however managed to land another nice 70-80cm fish and lost one to a shark as well. Unfortunately by lunchtime the wind picked up dramatically, gusting 30knots+, and disrupted our afternoon plans. Leonard and Jeff braved the wind and had a couple more shots at triggers but came home empty handed. We opted to do some late afternoon teasing off the reef close to the boat and manage to raise some really big bluefin trevally. Dave Aitken landed a tank bluefin that was in the region of 7-8kg and got smoked by a very angry GT. Ryan got handled as well by a big Bohar snapper but managed to land a smaller bohar. 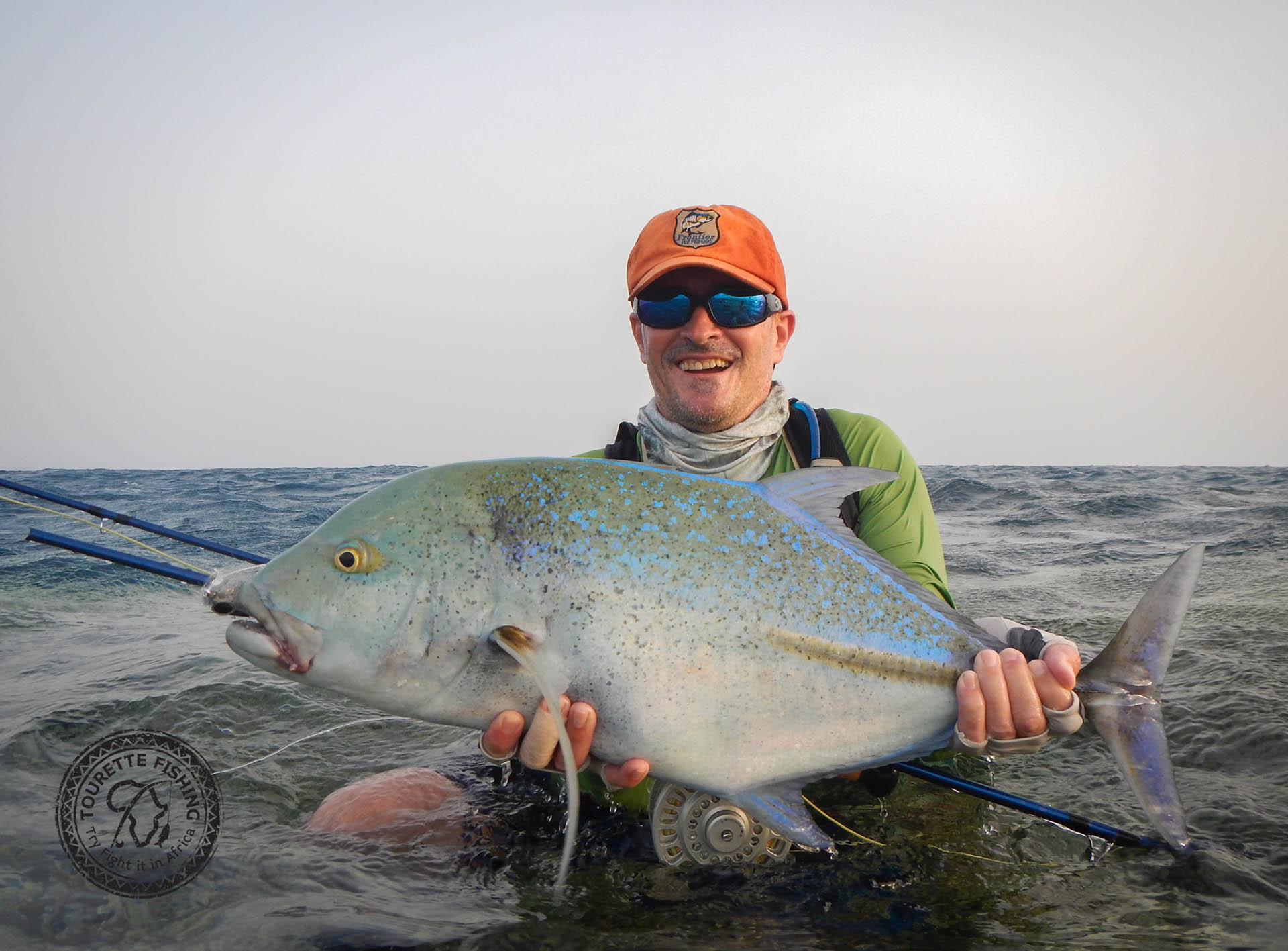 Over the next couple days the wind grew even stronger and continued right through till the end of the week. Needless to say the fishing became really tough! We snuck in one more session on Shamabaia before making our way down to the sheltered side of the Playstation and the Big Island where we fished the remainder of the week. We got some more shots at triggers and gt’s, with both Jay Smit and Leonard Flemming landing really nice yellow margin triggers but the story of the second half of the week undoubtedly goes to Jeff Tyser.

Over the course of the season we have raised a number of Dogtooth Tuna while teasing off terra firma. But almost every time the tuna would either get hold of the teaser and then run like hell, or go completely airborne behind the teaser and then loose interest.

This time round, Jeff was walking and blind casting his 12wt over the edge of the reef when he went tight with what was first thought to be a big trevally. The fish took off like a freight train and went straight back into the deep. At the rate this fish was diving, any thoughts of trevally were quickly erased however and the guys started dreaming of the impossible. Jeff managed to hold his own against all odds and after a solid tug of war, landed a beautiful Dogtooth Tuna. This is not the first dogtooth tuna to be landed on fly……. BUT…On fly, while walking on Terra Firma?? This should be a first of some sorts??? Either way this is a catch that will go down in the record books of the Nubian Flats and will be remembered for a very very long time. 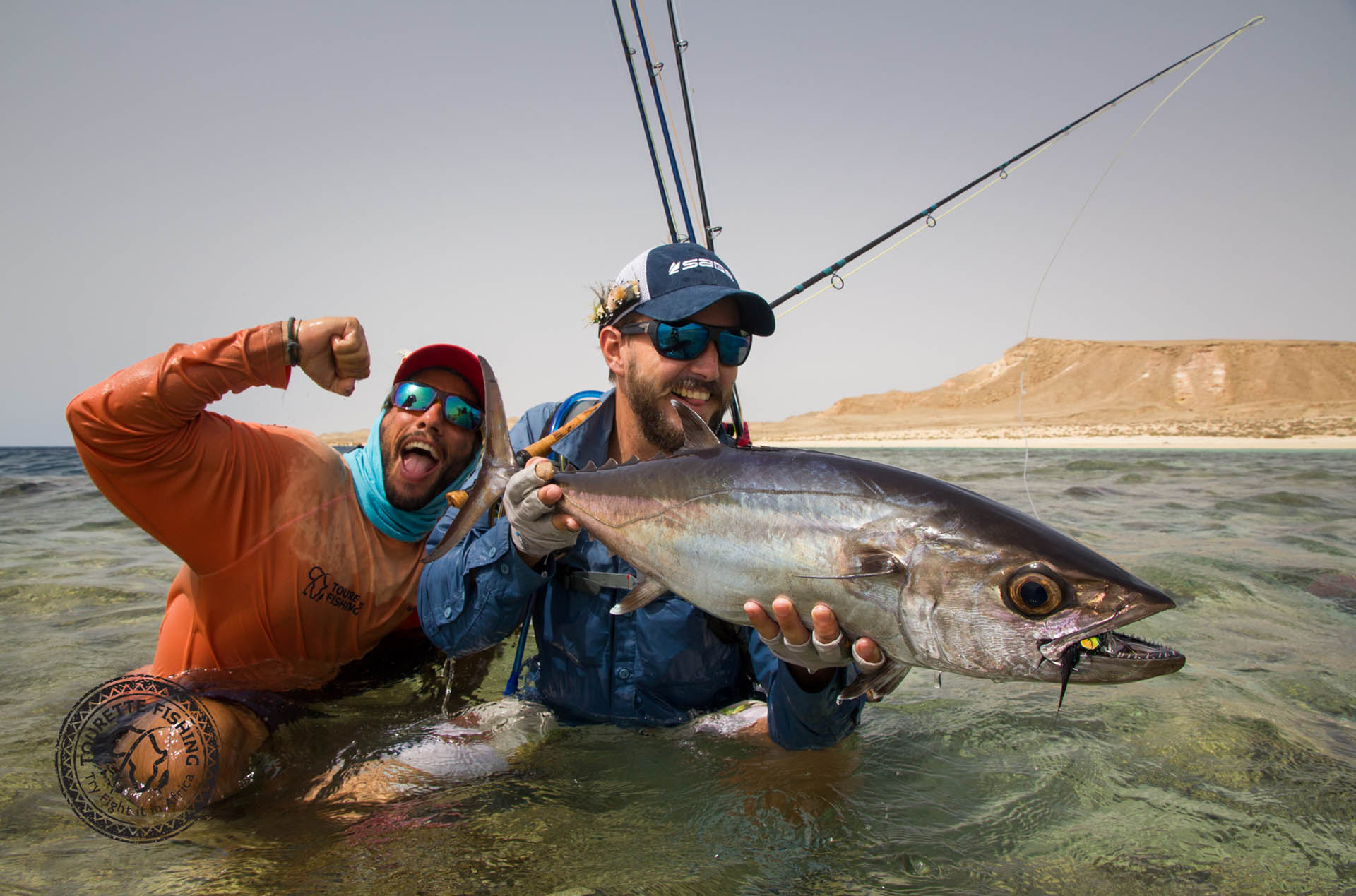 To say both guide and guest was exited would be an understatement! (Photo Credit: Leonard Flemming) 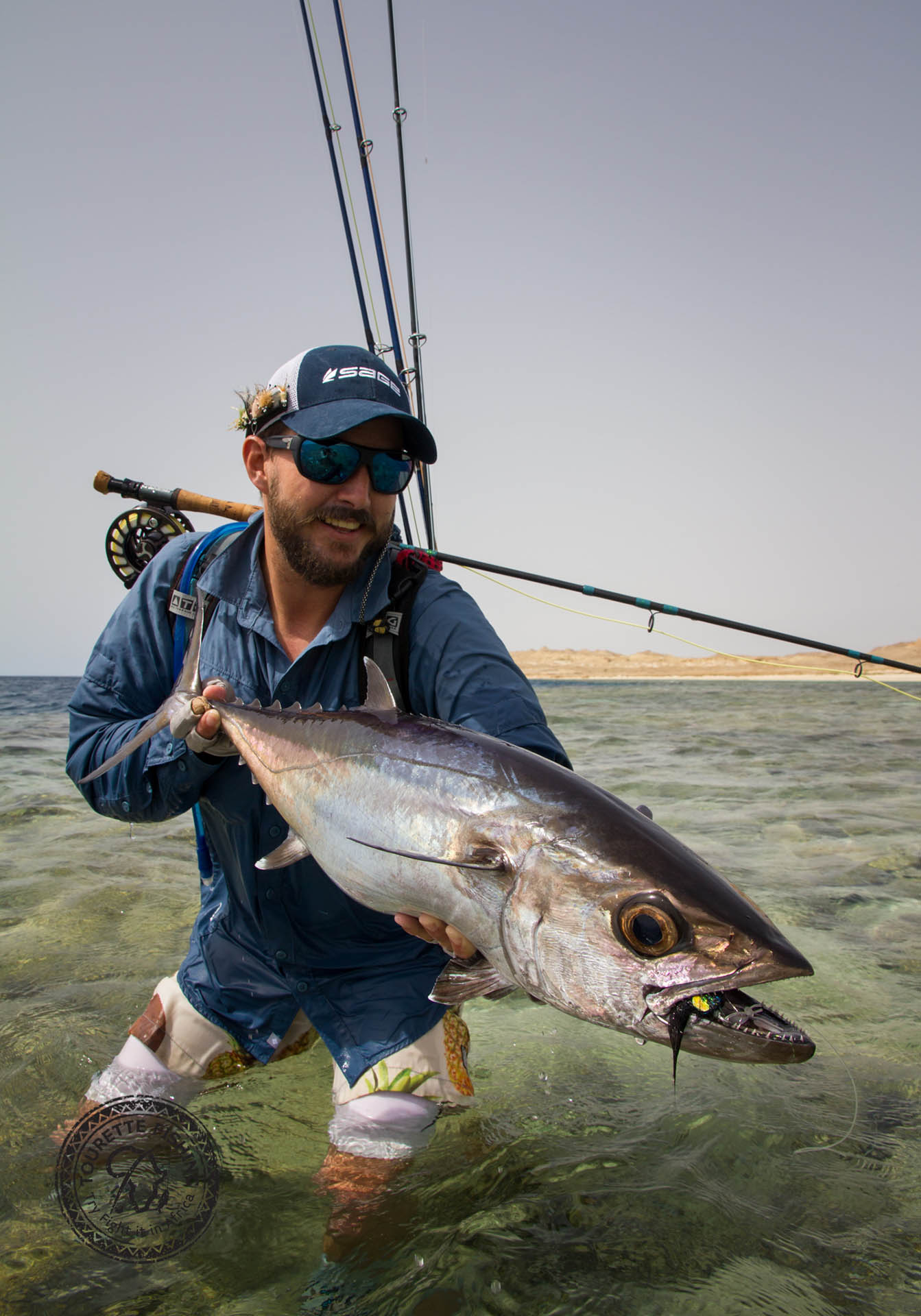 Unfortunately unseasonal winds really pestered our season on the Nubian Flats this year. The wind blew most weeks and some weeks it really got out of control but despite all of this, we still managed to land some really amazing fish and share some unforgettable experiences.

From the guides team in Sudan, we would like to thank all the guests who fished with us this season and we are looking forward to the 2016 season. Who knows what it will hold in store for us. 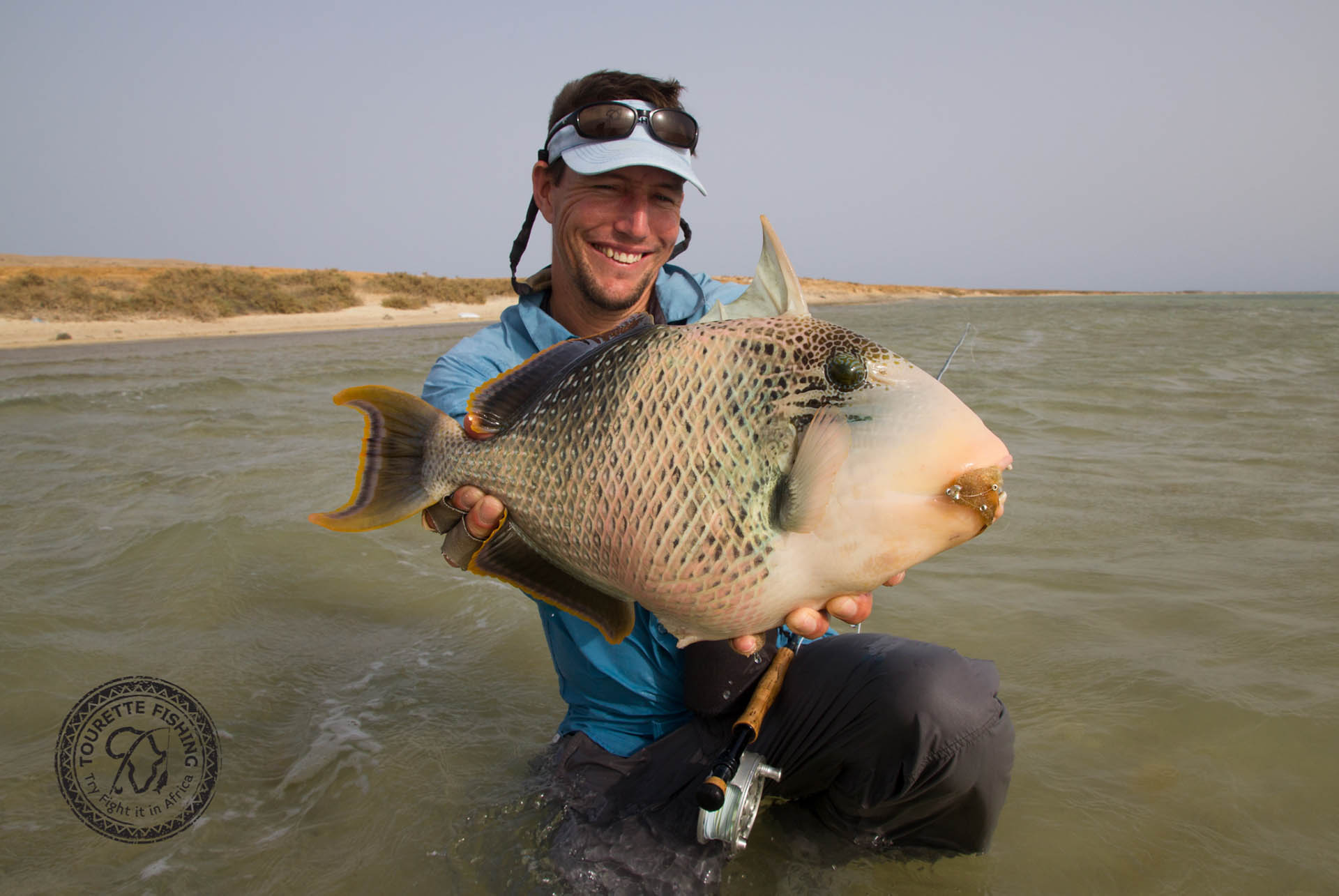 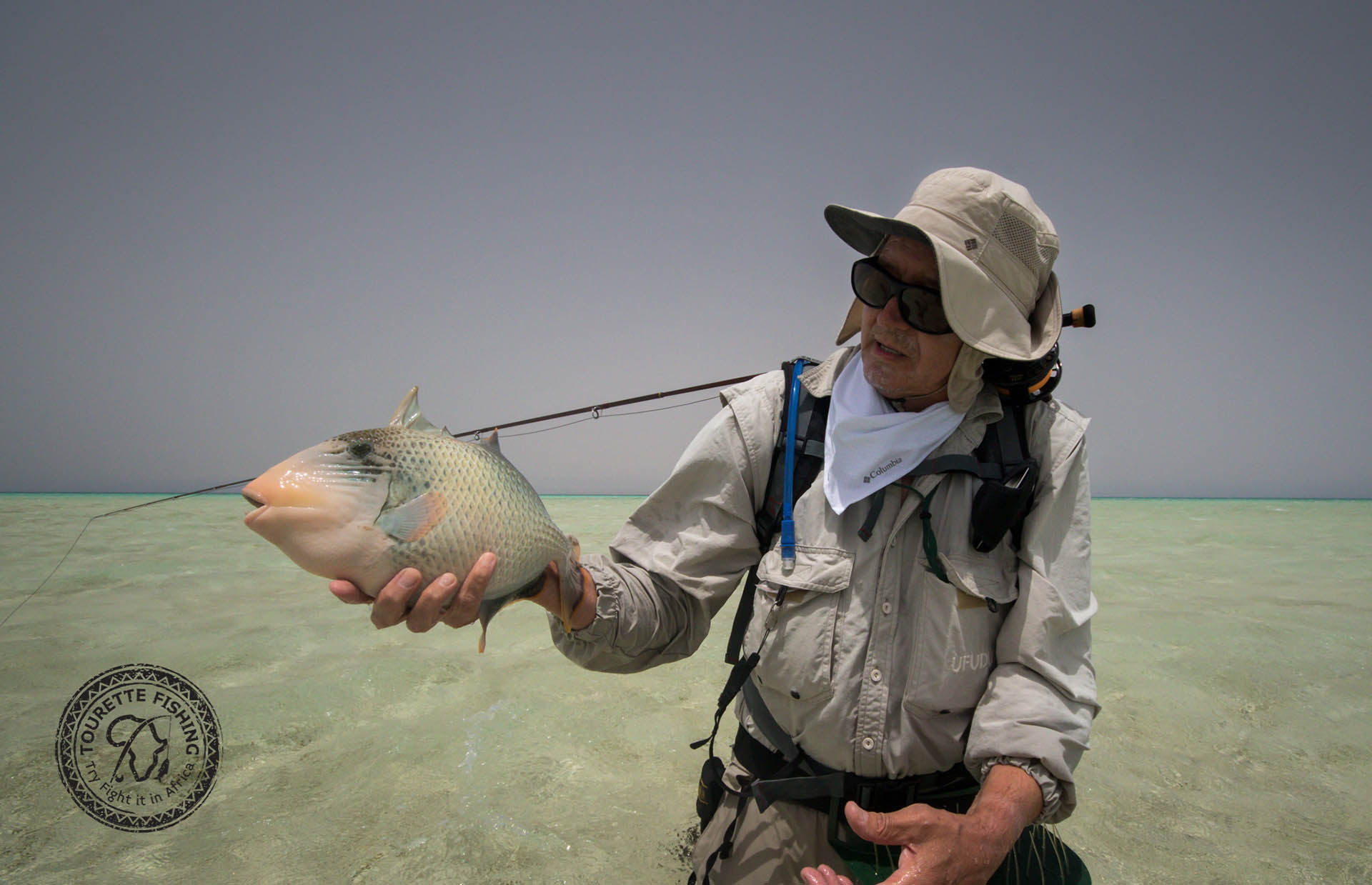 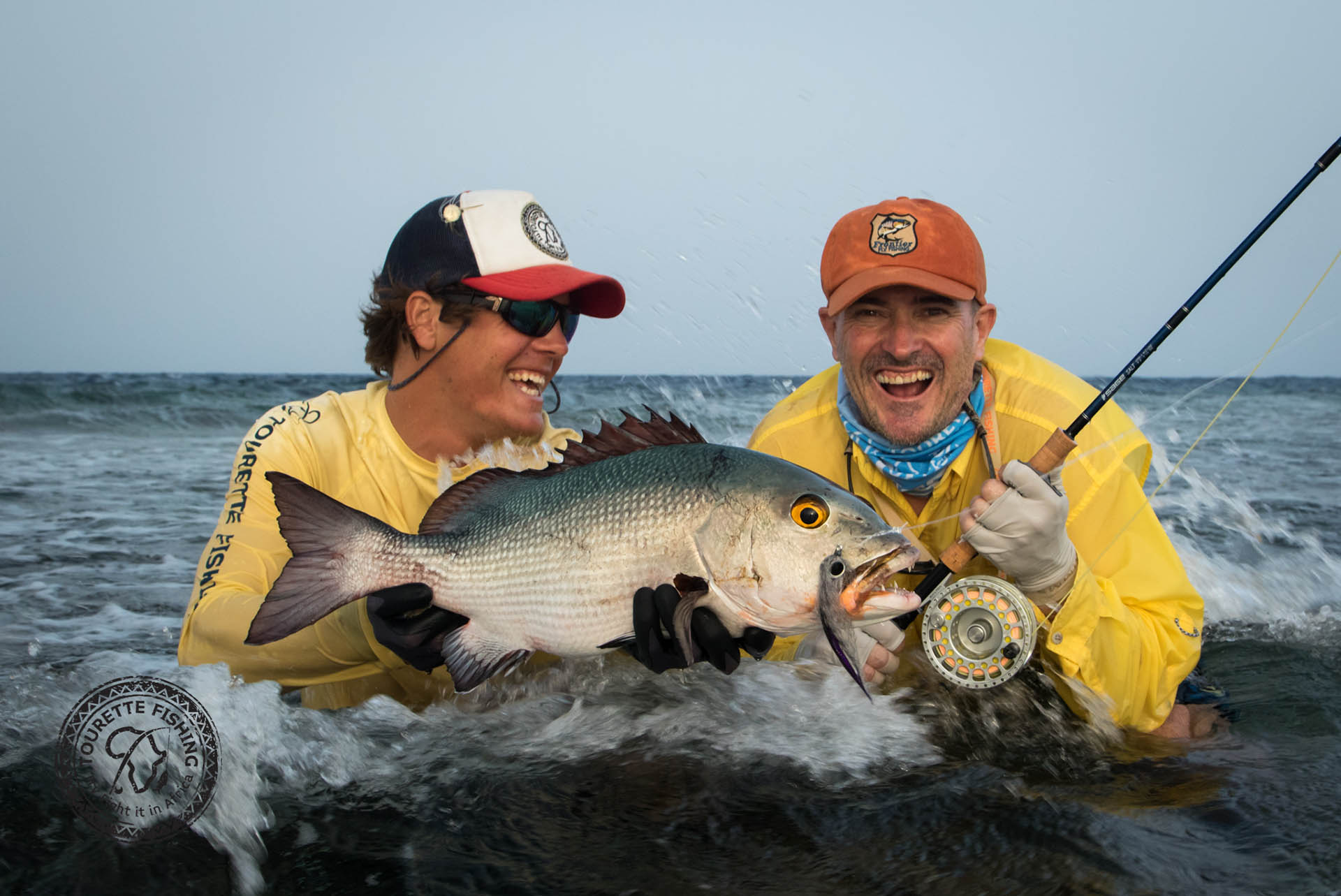