Words from the angler: Myself, Ed Truter and two guests were busy with the 2nd of two exploratory missions in early 2018. The January trip had been a success with 3 fish over the 100cm landed, but we had to go back at what we felt was the tail end of the prime season, to test the water so to speak, and record any significant changes in conditions or fly fishing tactics. The January trip also had the team wondering about a couple of monstrous fish that managed to evade landing in the way only big perch can – the combination of brute power and an ability to find and use every piece structure to sever leader and fly lines. We had a few 90 – 114cm fish under the belt on this trip so far, and were beginning to devise some sort of fighting tactic to land the bigger fish in such structure rich waters. On this particular session, the stars aligned, and as with most trophy fish, a fair amount of luck was involved in the eventual landing of the fish.As is often the case, the session started with good activity from smaller fish. This is always a good way to build up to bigger fish, as the anticipation of a bite ensures you are in the zone from the get-go. This fish, like all others, hit like a brick wall on a speeding train. I knew it was big from the start, but how big it was, was hard to gauge on the hit an initial run. It could have been 90cm or 180cm. It is only when the fish show themselves in the first jump, or the initial shock of the eat turns into a tug of war, that the angler can begin to calibrate and estimate the size of the fish. Suffice to say, I had called down to Ed immediately warning of the ensuing tussle with a proper fish. The fish ran deep into my backing on the first run and

took me straight through a massive mid water rocky outcrop. Fortunately, I felt the backing touch the structure and immediately slacked off the drag completely. With my Sl7 pretty much on free spool, the fish was marginally slowed down by the friction of backing running through the rocks mid water. I had continued to call Ed to come up and assist by this point and was frantically trying to free my backing from the structure. Getting right on top of the obstacle, I managed to dig my rod tip over, down and out. Astonishingly the backing somehow flicked out and off the snag, and the fight was back on. Rock hopping closer to the fish I began to reel up the backing and put in a solid pull on the fish. It was at this moment, I knew I had f*cked up. I had failed to tighten my drag after getting free from the snag. A massive overwind of backing sprayed out of the reel, jamming it instantly. I began to request Ed’s urgent assistance using far less subtle language. While I made my way up river, hand lining the fish, still in the backing, the situation turned from precarious, too helpless. A large loop of backing had hooked around a rock about 20m behind me, the fish was tight on the other end, and the overwind knot on the reel had resulted in a stalemate. Not able to follow the fish any longer, and with no room to offer it any more line, I was at the mercy of the fish, and Ed’s ability to engage his inner klipspringer and get to the snagged backing behind me. Ed made it to the snagged backing. The fish decided not to carry on its blistering run, I was able to reel up the backing (over the overwind), tighten my drag, and we were back in the fight. With myself, Ed, Craig and Div all together now, the astonishment when it first came out the water, bathed in our torch light, may well have been heard from as far away as Chad and Nigeria. A couple of hairy moment around the oyster beds, and then Ed managed to lip the big girl. We had our first 100lb Nile Perch to hand. A team effort for sure, and one that could have easily gone the other way on numerous occasions. Sharing this moment with the team in camp, and back home was a watershed moment for us. We had finally landed a 100lb fish. Would it be repeated? What size fish would we find in this system when we began operations proper in 2019? It was a fitting way to end the 2018 exploratory process.

p.s. in an appropriate twist of fly fishing fate, I have rapidly found myself moving from being the Faro100lb club’s first member to its lowest rank member, scraping in by only a few pounds. I look forward to remaining on the bottom of a growing list of fortunate anglers. 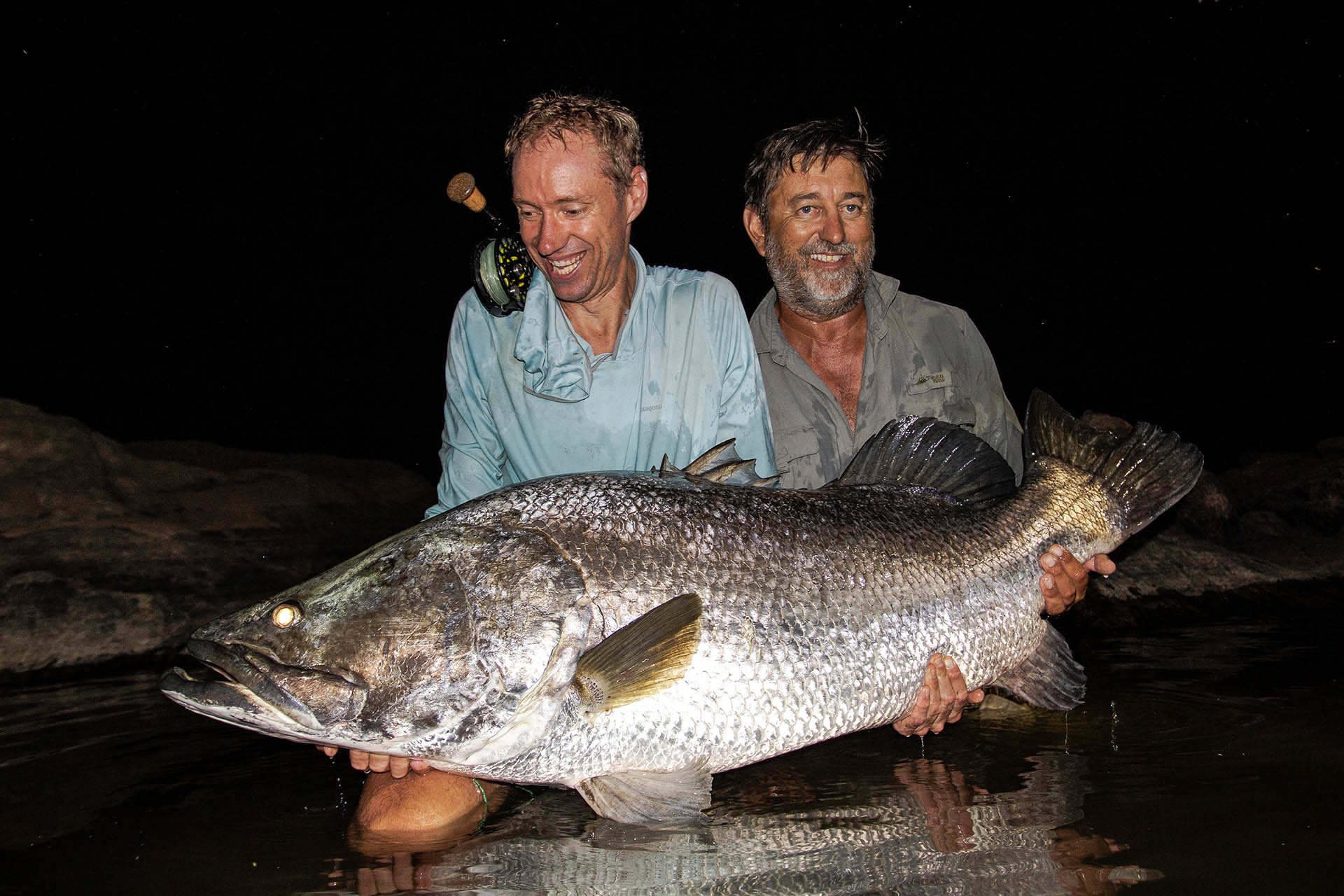 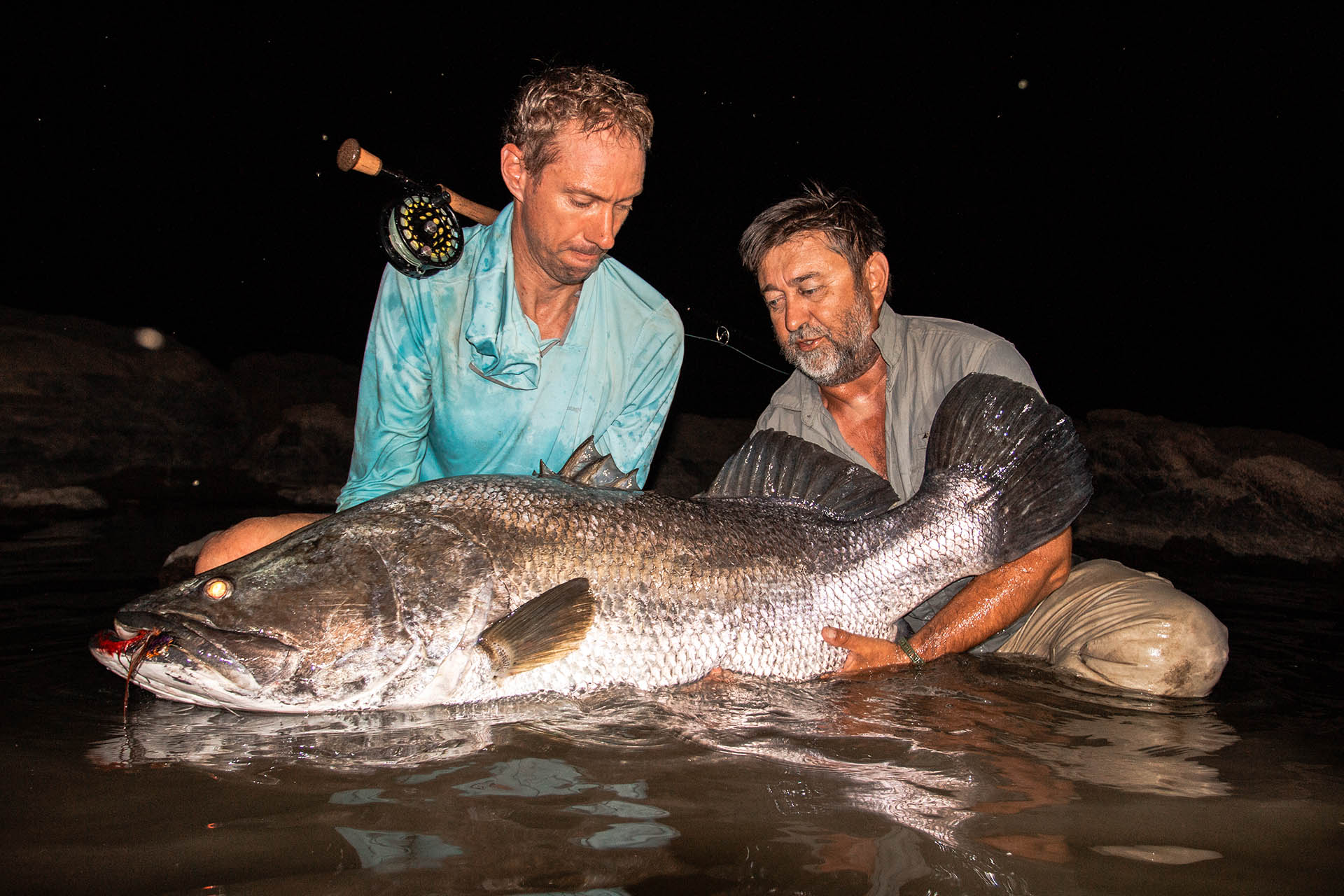