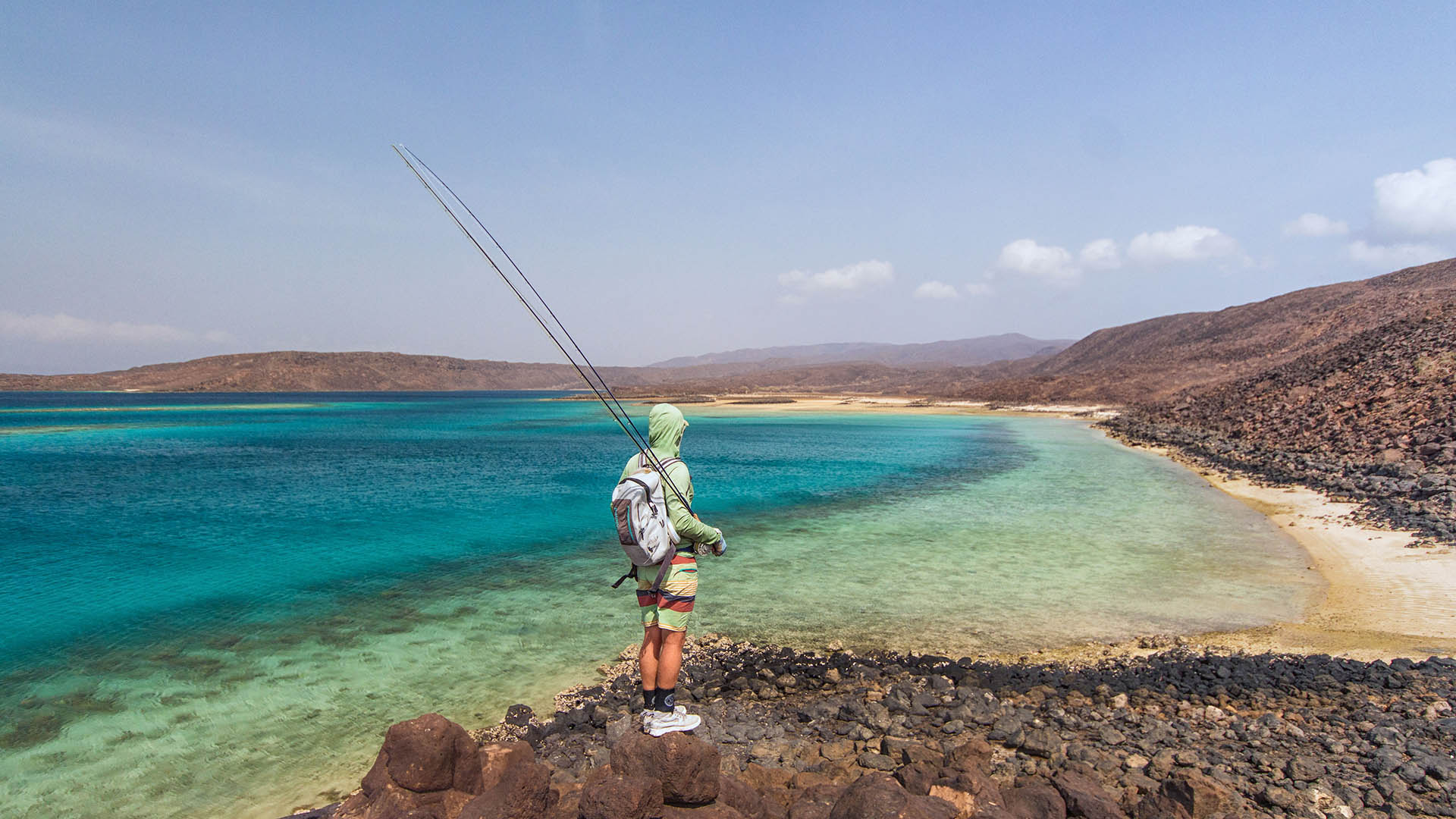 For many years exploring a specific area within Djibouti, with the aim of assessing the flats fishing potential, has been on our radar.

After many postponed trips, we finally put a peg in the sand and committed to a week’s worth of exploring the inland sea of Lac du Goubert. The fringes of which were dotted with promising looking flats, drop offs and channels.

I was joined by good friends Armand, Garth, Bertu, Jon and Dan and with a great sense of adventure, which only the unknown can bring, we set off with the aim of fishing flats that had never seen a fly before.

At this point I would like to give an overview of what we found:

We found some amazing looking areas that were very close to being pristine. We found fair numbers of triggers, both moustache and yellow

margin, tailing in skinny water. We found permit tailing on the flats. Between the group we had shots almost every session at free swimming GTs on the flats – most of these were big fish in the 100 to 115cm class. We also found, for the species, high numbers of napoleons on the flats. Some of these napoleons were tailing in such shallow water that their backs would be out the water. Oh yes, and the triggers were all exceptionally big – with most fish being between 8 and 12 pounds. Definitely the biggest triggers I have ever seen.

Diving the drop offs and flat edges were some of the healthiest coral populations I have ever seen. Even square inch was alive.

Reading the above overview it would be fair to say that this destination was something to get excited about and to consider booking a spot on the next available flight. There are not many places in the world where you can consistently sight fish to big GTs on the flats and anywhere

that has an indicator species like napoleons, that are willing to come onto the flats, must be a prime fly fishing destination.

That overview is completely true, but it only tells half the story.

Living in the desert was hard, to be fair most of this hardship was self-inflected, but this is an environment where humans shouldn’t exist. Throw into the equation the difficult logistics to get decent food, fuel and water, and it starts to paint a picture of what this place is like. Black larva rocks and sand as far as the eye can see. The landscapes are dramatic – but not in a way that takes your breath away and fills you with hope and euphoria. The landscape is a result of volcanic action and it literally melted into place. It takes your breath away and it is beautiful in a way that fills you with trepidation and anxiety. You can’t help but let you mind wonder to strange places and imagine how long you would be able to survive shipwrecked in such a place – (the answer – not very long).

On top of the environment, there are constant reminders of the breakdown in humanity in Yemen where ever you look – make shift boats constructed out of floatsom and polystyrene that Yemenis refugees have constructed to escape the conflict across the gulf of Aiden. On one occasion we even bumped into a person on their own, a look of fear on his face, in the middle of nowhere, thin and obviously displaced. Although we couldn’t communicate, we presumed he was a refugee from Yemen, looking for some way to survive. Against that bleak environment, it was hard to comprehend that he had run away from somewhere that was way worse than that.

And now to the fish – we caught a fair number of really big triggers between the group. Some exceptional fish. We hooked a handful of napoleons on the flats, but everyone ended the

same with a snapped leader. The GTs were some of the most cautious I have ever encountered. I personally cast at 8 different GTs, on different flats, with almost every one being a text book scenario where I saw the fish coming from a long way off. Every single fish should have eaten – but instead half spooked, and other half swam in slowly inspected the fly and merely carried on their business. To see a meter twenty fish casually eye ball your fly, after walking 7 kilometers to get that one shot fills you with the complete spectrum of emotions. Happy, sad, angry, ecstatic, calm, frantic, energized and crippling

In a way it was the worst and the best that a fly fishing trip could offer. The group that travelled have fished enough to know that there are more important aspects to an experience than merely catching fish.

For me, I didn’t catch a single fish the whole week, but it is the type of trip that will stay with

me forever. The place played with your emotions, as soon as you felt as if you had reached rock bottom, it would show you something incredibly special and your hope, enthusiasm and energy levels would surge. It had a way of at the very moment you thought that it was the worst place on the planet, it would convince you for just long enough that it was the best place on the planet.

It also gave us an insight into the lives of ordinary people within Djibouti and Yemen, and with this an overwhelming appreciation of how good our lives are. We get so caught up in our day to day lives and the problems that we have to overcome. Visiting a place that is so tough it allows us to put our own challenges into perspective. Sometimes you have to step a very long way out of your comfort zone to appreciate things that you take for granted on a day to day basis. I am lucky enough to be very well travelled and Djibouti did this in a way that not many other places have been able to do for me for a very long time.

Hardship also brings out the best and worst in people – in our case we were very fortunate that the camaraderie in our group was exceptional.

The desert wind and sand beat us up but only acted as a catalyst to further everyone’s sense of humour and banter.

It was a rollercoaster – both physically and emotionally. I swore many times that I would

never set foot on Djibouti ground again. It’s been a few weeks since I got back, and I think I’m ready to book another ticket to give it another chance. It is a very special place – in the best and worst way. 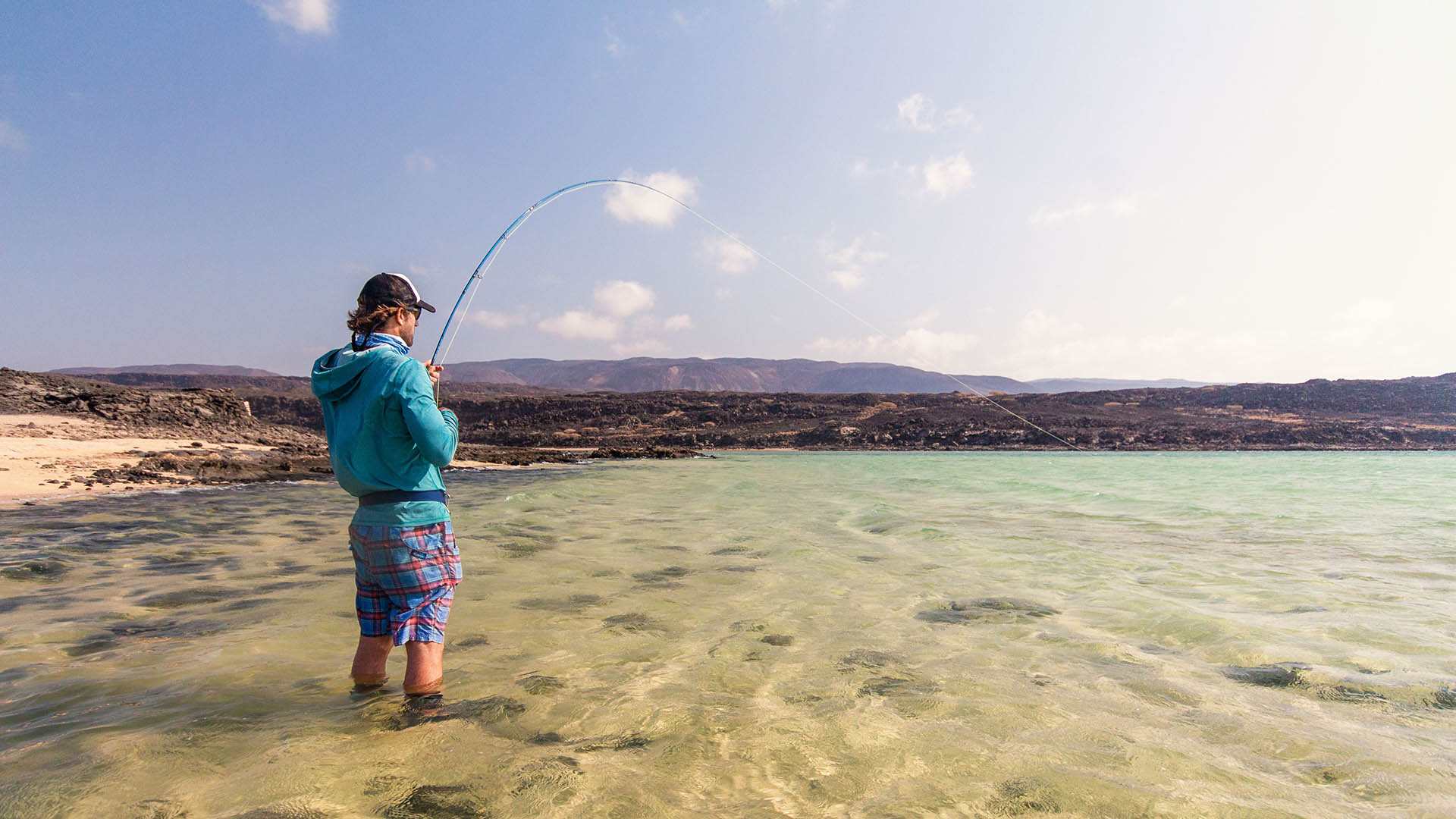 Dan into a nice moustache triggerfish 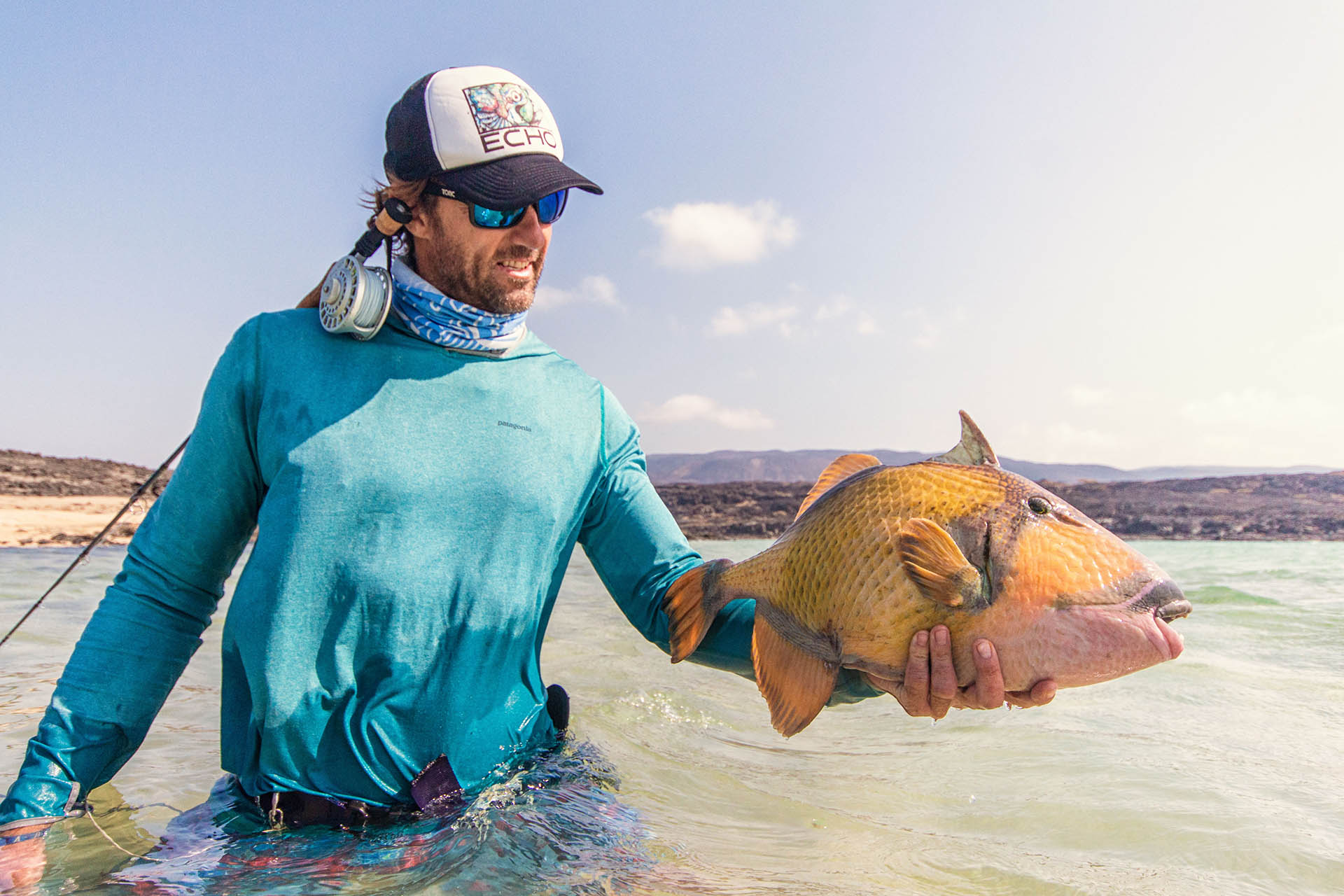 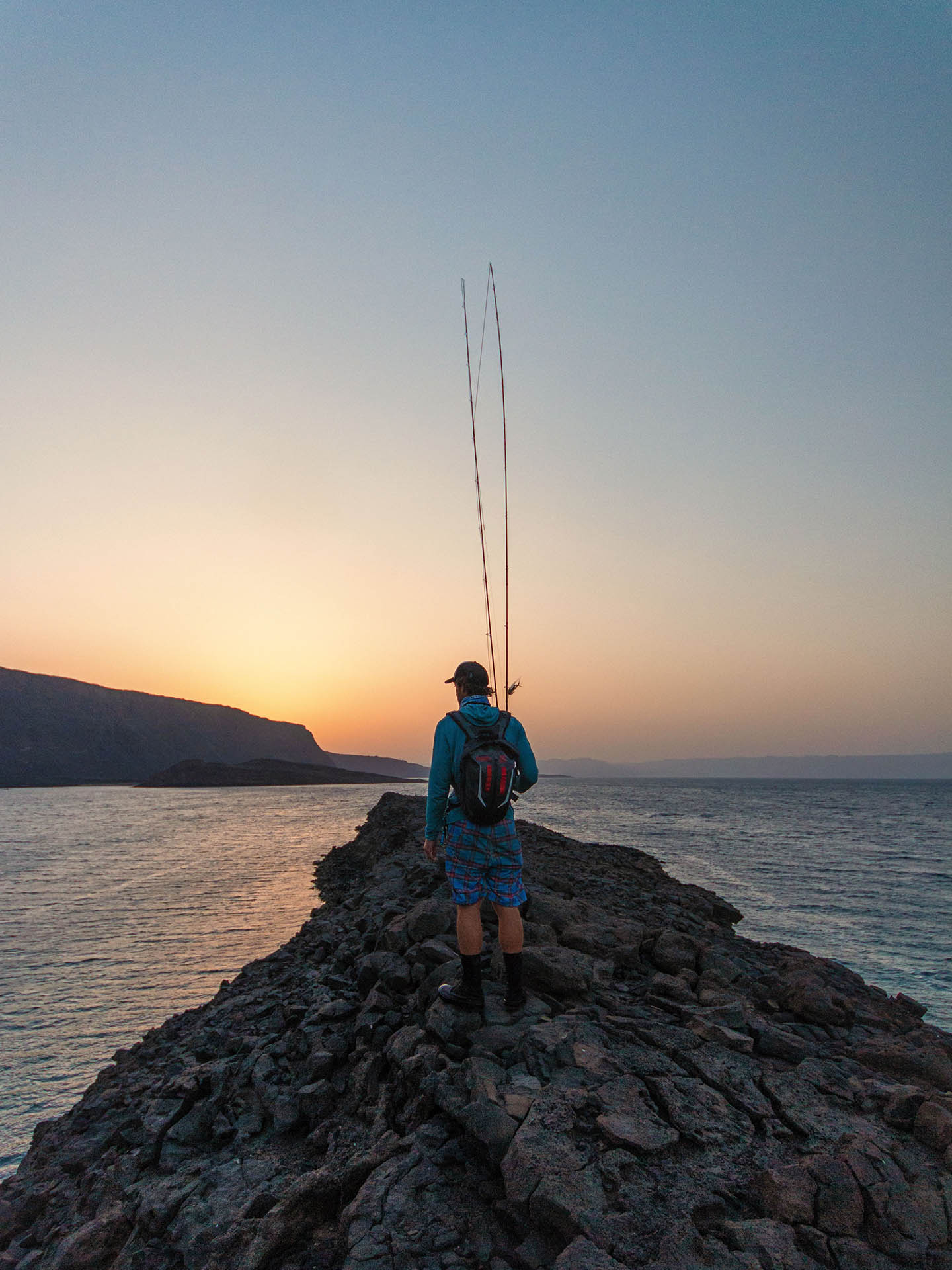 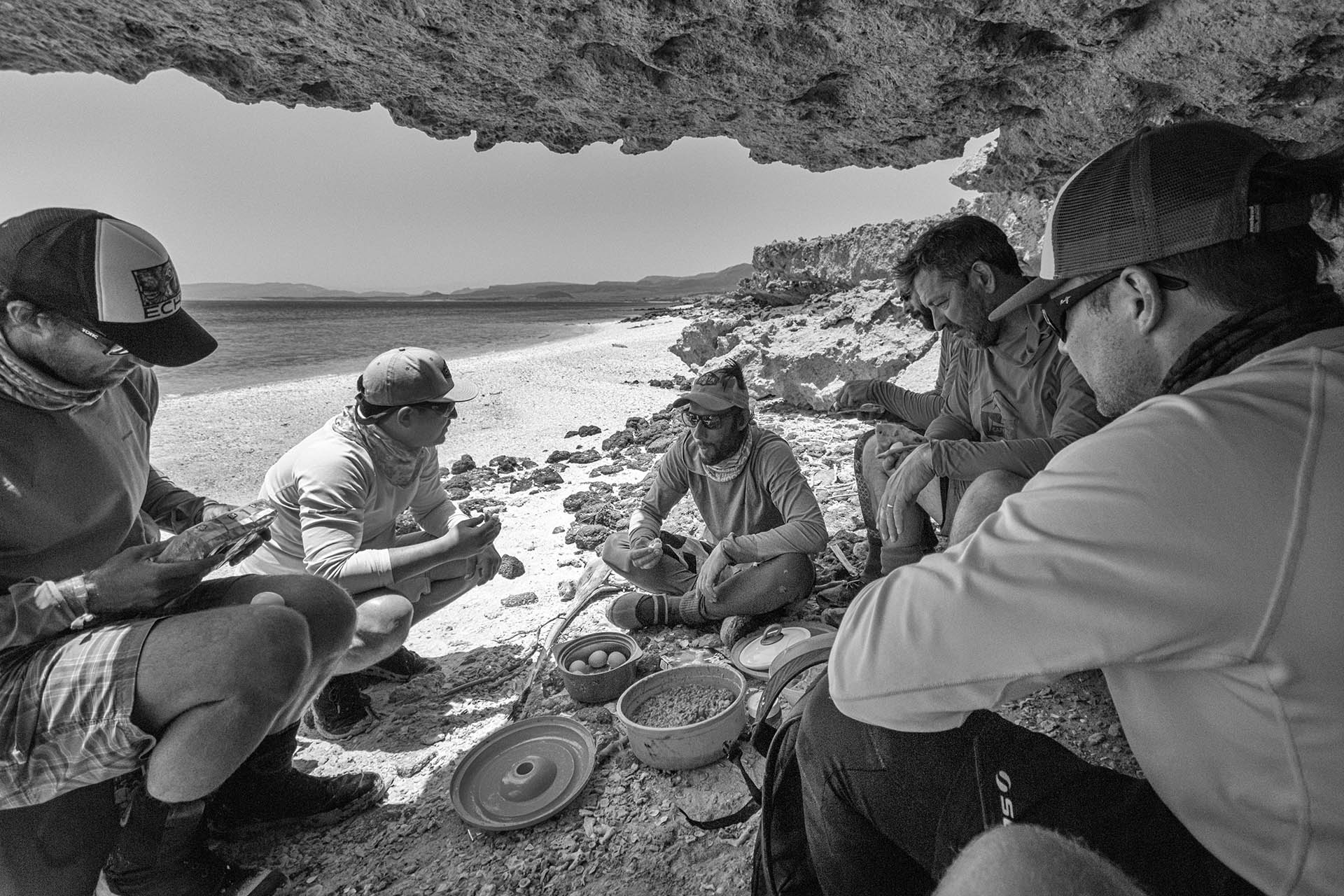 Trying to get out of the midday heat. The sun is really intense in these parts of the world 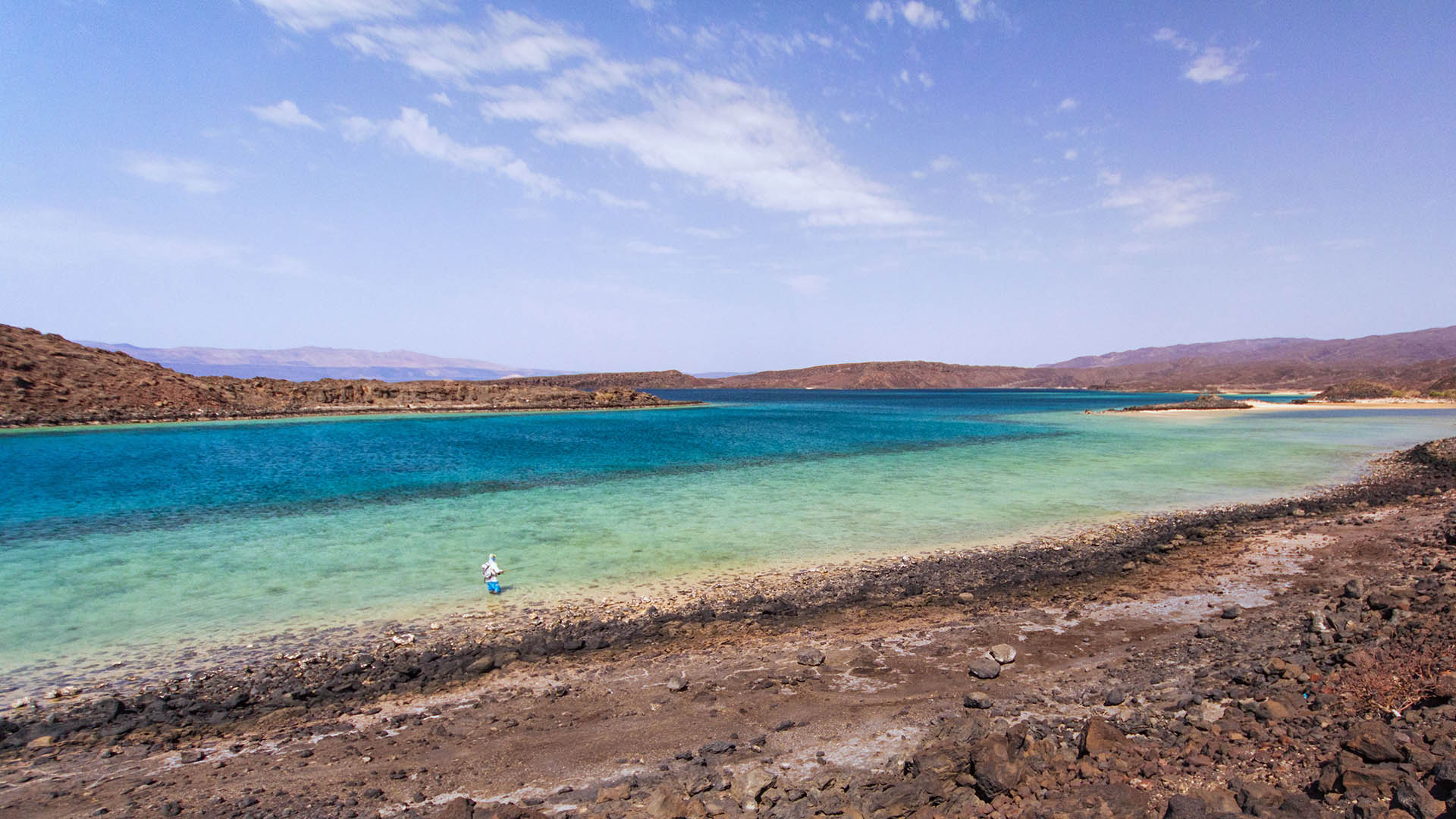 On the prowl for tailing triggerfish

The backdrops in Djibouti are really spectacular 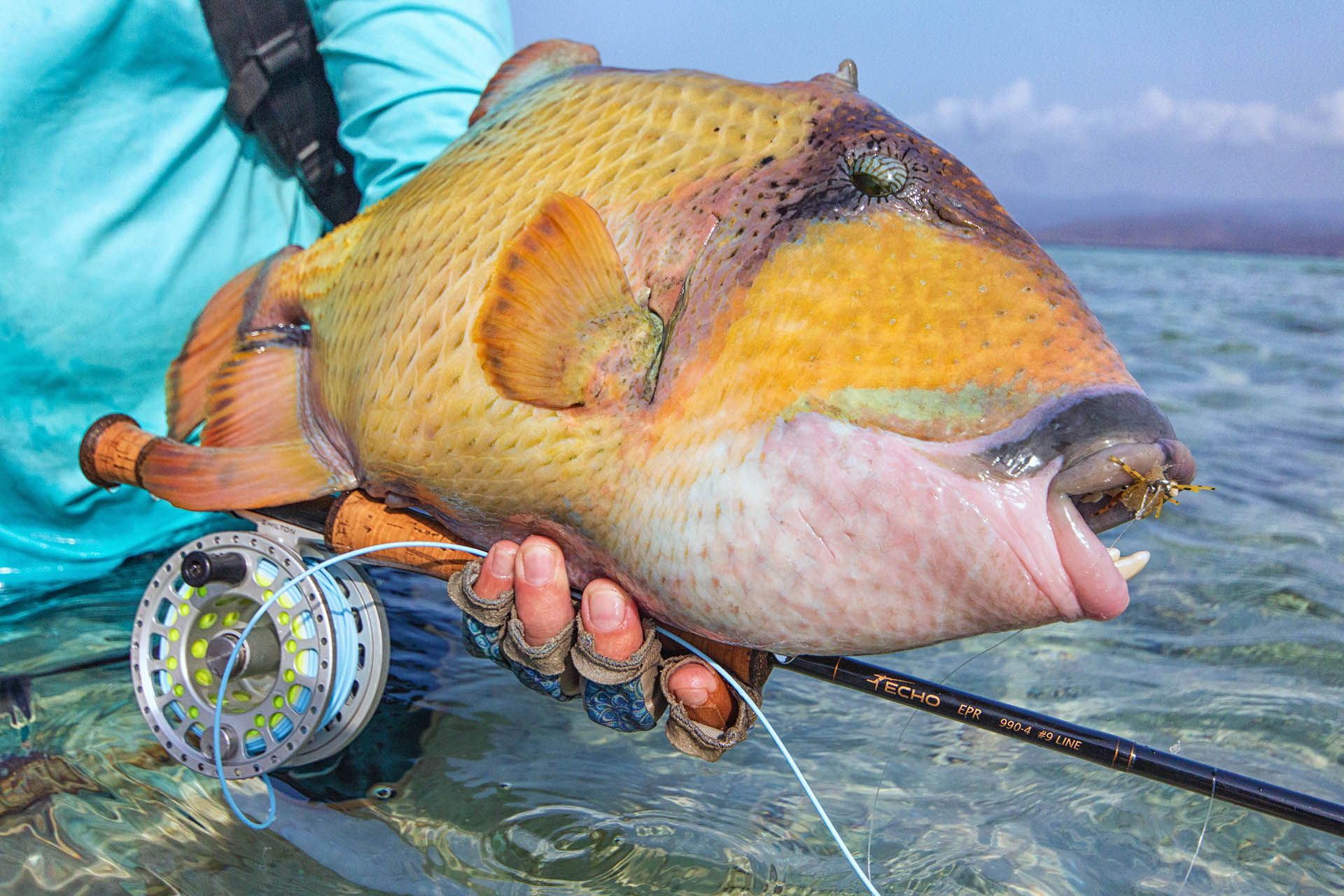 Hate or love them, triggerfish are so addictive to target on fly 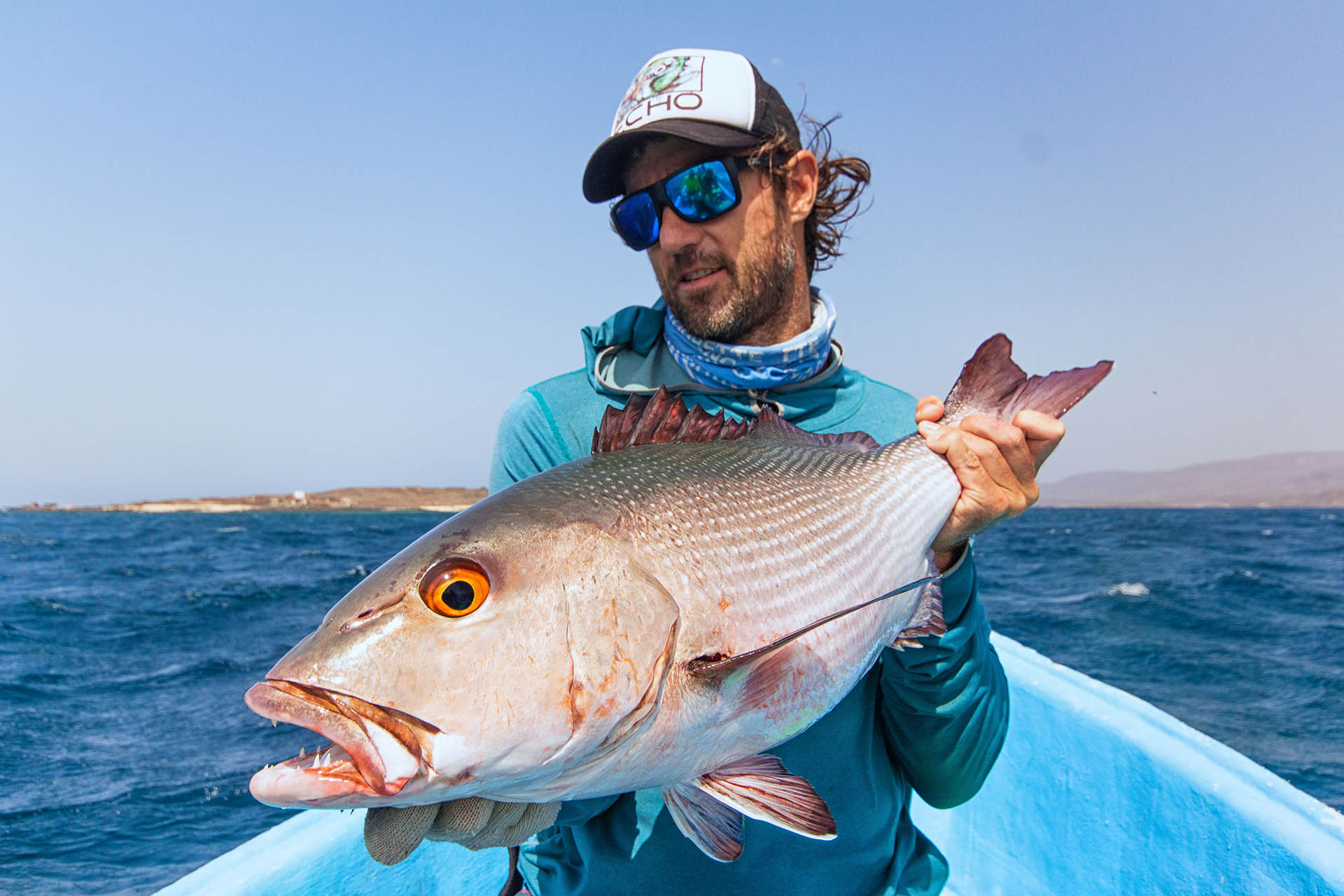 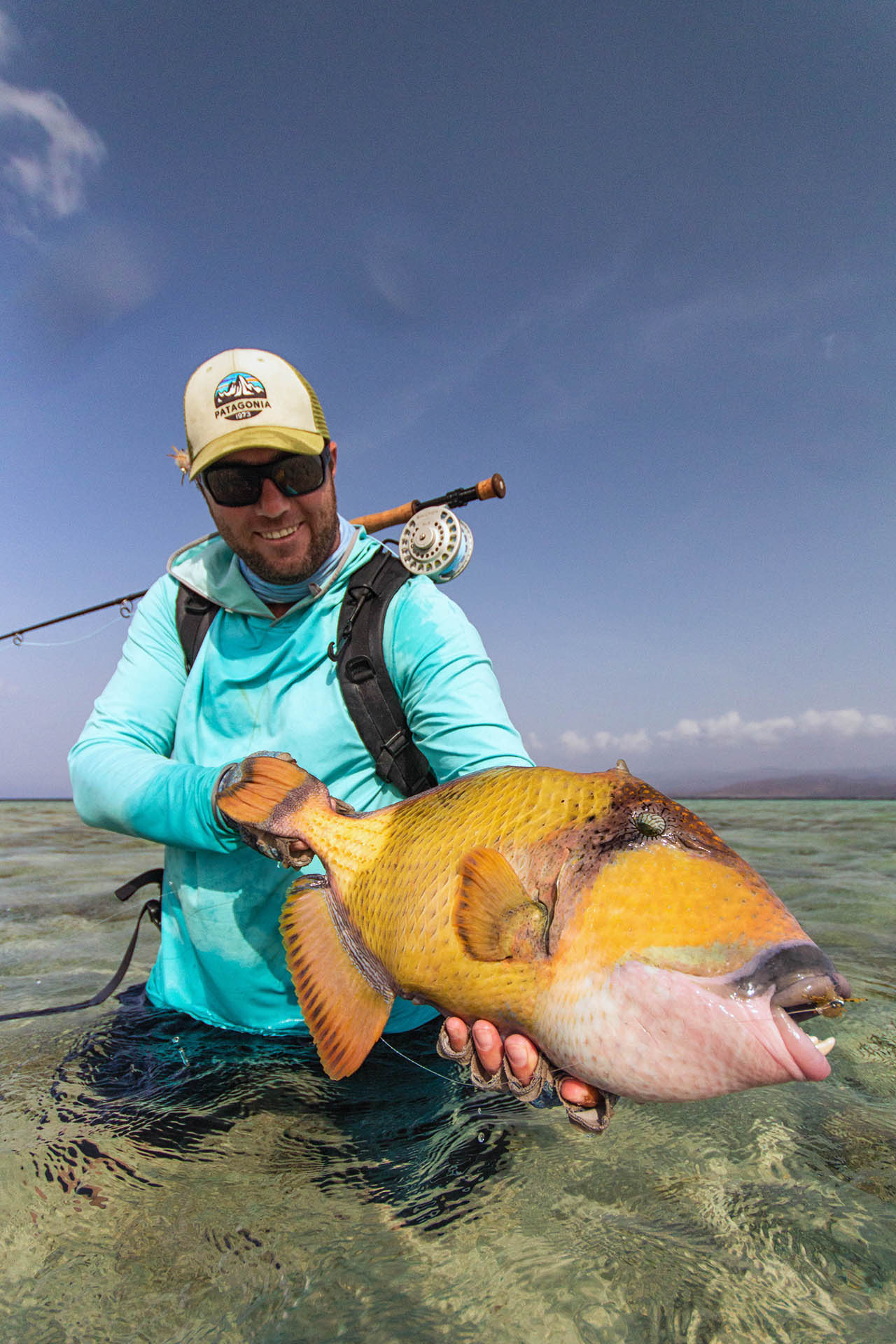 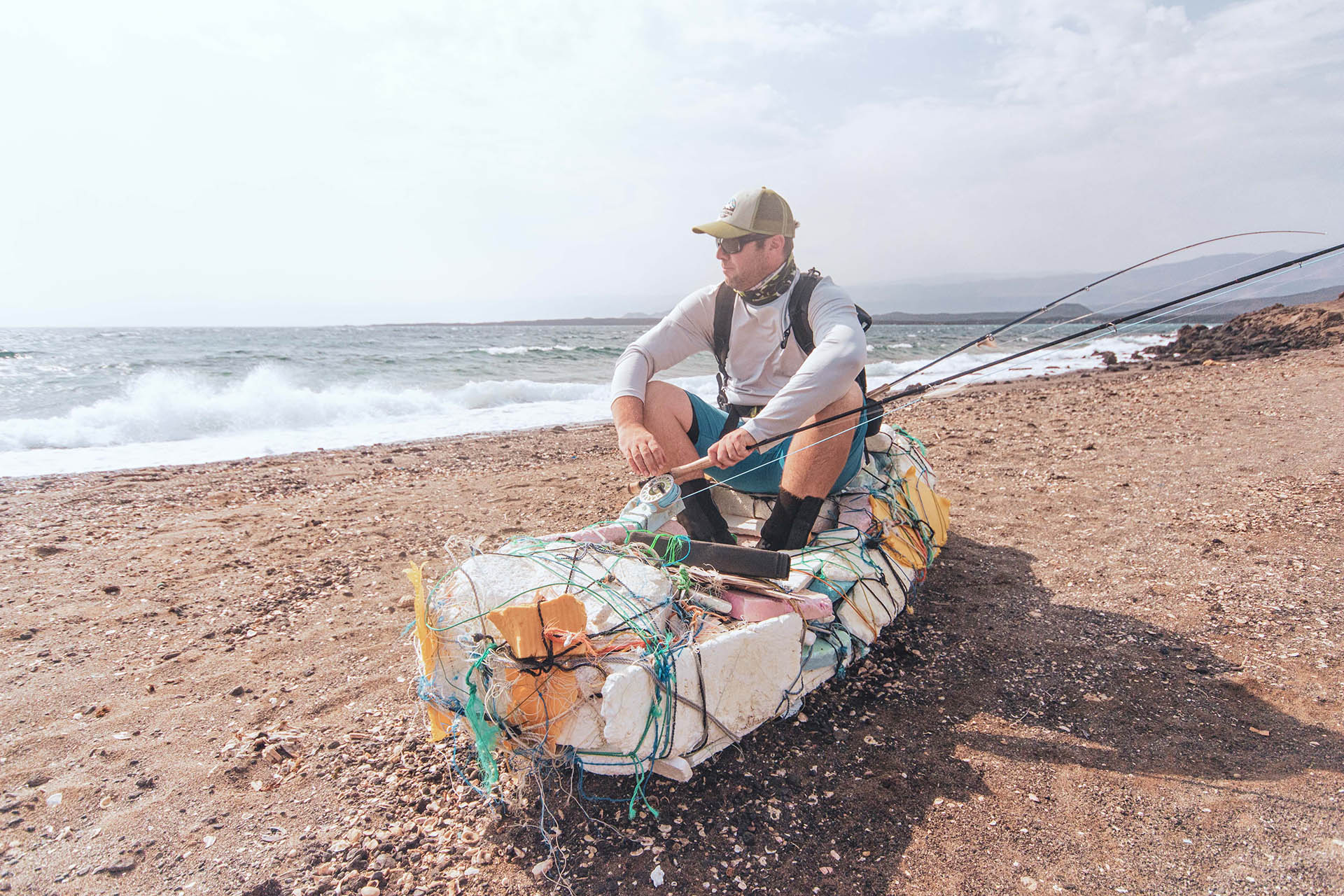 John giving the “floatsom” a test 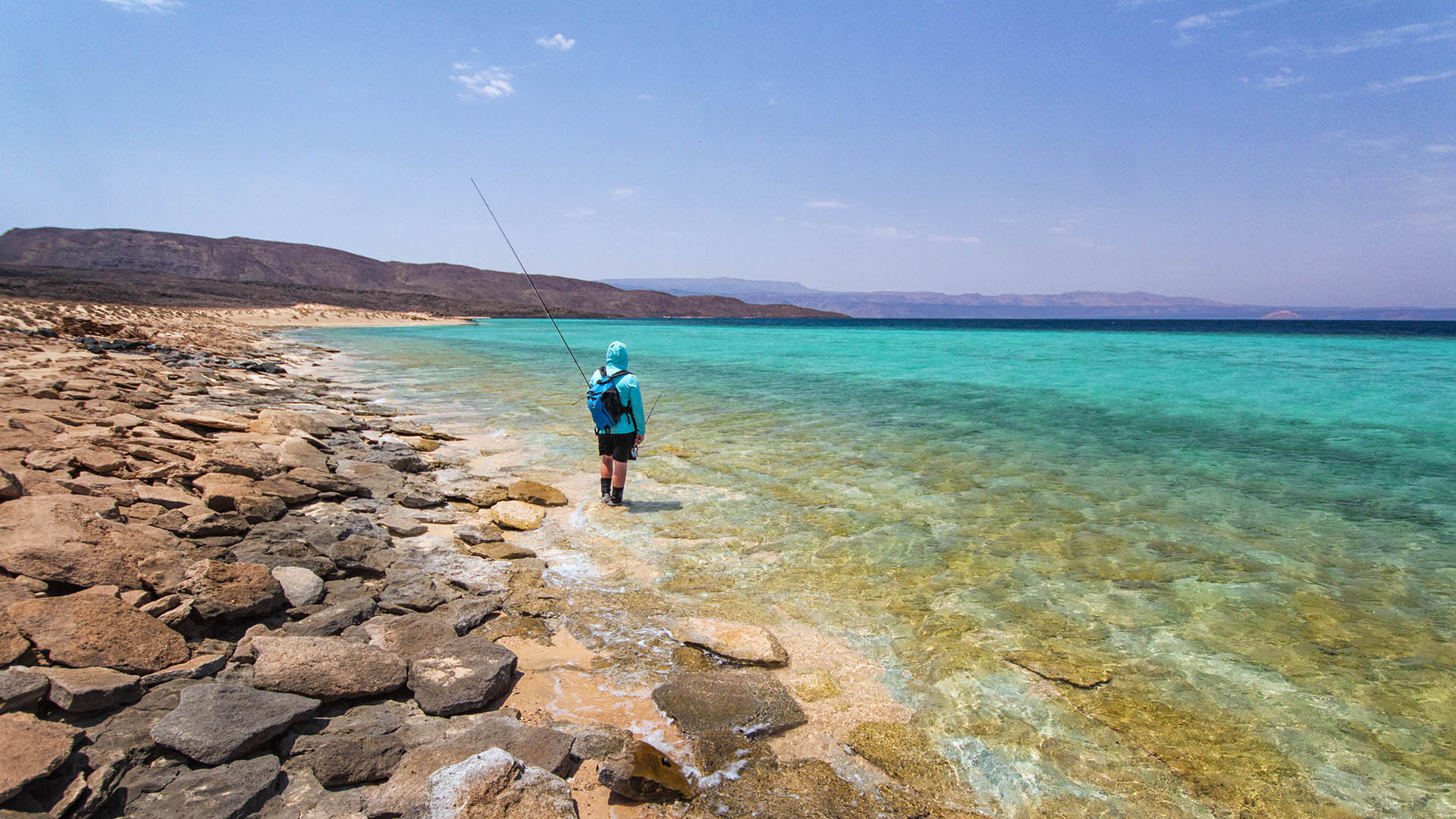 The scenery was something else 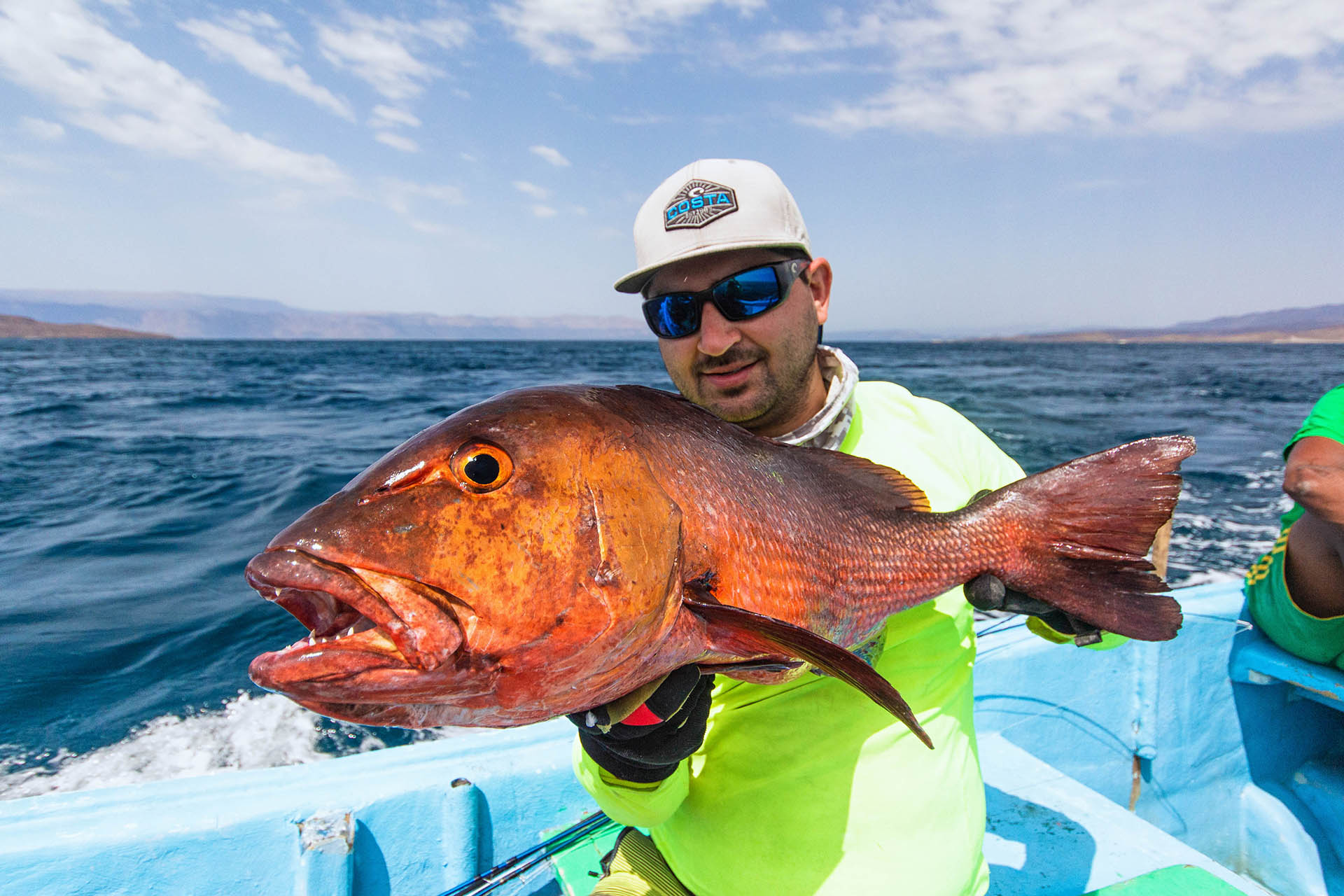