This is an exceptional fish, by any standards, but there is a lot more to this fish than its size. Estimated at 45 kilos, this is the biggest cubera that we have landed in Gabon on lure, off the beach.

The reason that this fish is so special is because of the story that it tells. To understand this story, we have to look back 8 years, when we first started seriously fishing the waters of Gabon and Sette Cama in particular. In these early days, we thought the fishing was nothing short of amazing. We caught a huge number of fish – jacks, tarpon, cubera, threadfin, barracuda, kob. The fishing blew all our expectations away of what was possible to do fishing with your feet off terra firma.

However, in these early days, although we caught a good number of cubera and threadfin, the very vast majority of cases these fish were in the smaller 5 to 10 kilo range. Looking specifically at the cubera, in those early days if we got a fish over 20 kilos it was something to get excited about. If we got one over 25 kilos, we would drink a load of beers to celebrate and waste money on the sat phone telling the team in the office. On top of this, very few of these “bigger” fish came out on lures and were almost always caught on bait.

Then a few things transpired in Gabon, that meant that this fishery and amazing ecosystem was given the chance it needed to recover. 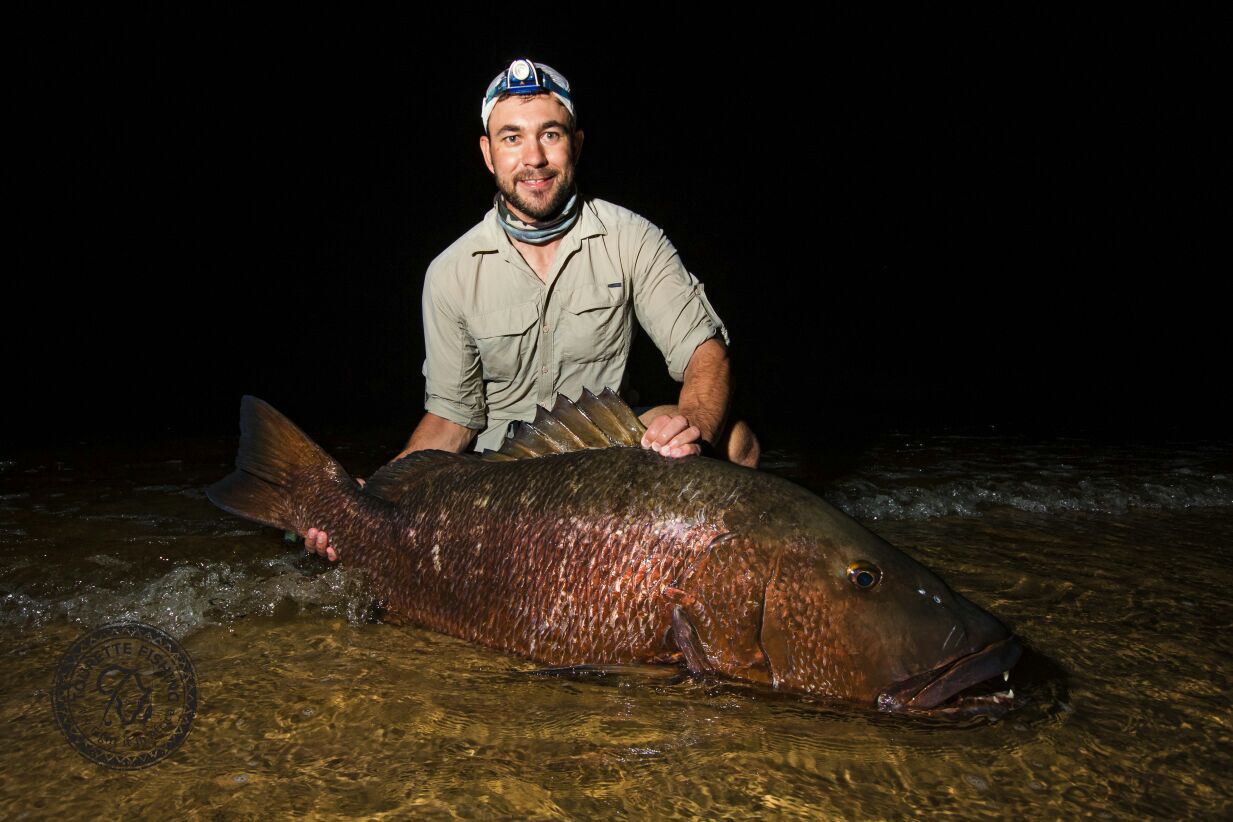 A fish fo a lifetime from Gabon 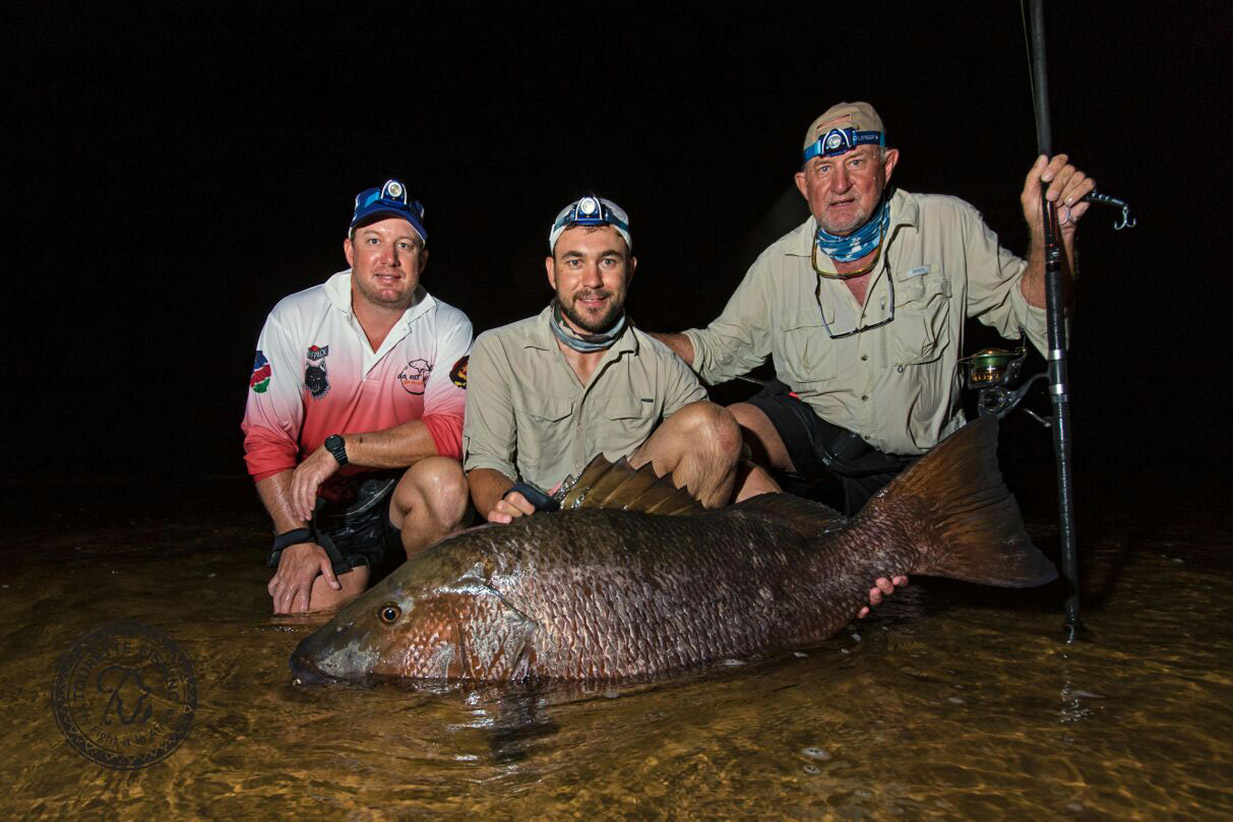 What an incrediblle fish – cubera snapper in Gabon

In these early days, and for the last few decades in fact, recreational anglers have done a huge amount of damage in Gabon. Killing fish for photographs was common place, and even when the fish were released they were given little to zero regard for their well being. Fish were lifted by the kills, dragged over dry sand, hung on boga grips – all in order to get a hero picture. Unfortunately, besides the cubera, most the fish in Gabon are very fragile, and any bad treatment, would have almost always resulted in the fish dying.

On top of this, fisheries around Gabon collapsed. Places like Ghana and Senegal, which had large populations reliant on fishing for income, were left with no fish. This forced a huge amount of migrant fishermen into Gabon waters in search of fertile, healthy fish populations. This placed immense pressure on the inshore fisheries of Gabon.

In any other case in Africa, one would have read the above intro and one would predict that the fishery within Gabon would soon collapse from over utilization and abuse. However, Gabon thankfully does not belong in that category.

Gabons government is extremely proactive in addressing the challenges its wild places, and ecosystems face. They have put into law no kills zones, and buffer areas along the coast. Not only have they put in place vital laws to protect these fragile areas, they are putting the man power and resources into enforcing these.

Mike Fey and his team at Gabon Parcs are doing an incredible job and making a very real difference. If what they are achieving could be replicated in other parts of the continent, we would enjoy a world that is very different to the one that we are leaving for our children. Their work is thankless and unrelenting, but they are creating miracles every day.

On our side, we have been working hard to address the bad practices that recreational fisherman made the fishery endure for all those years. To ensure that our presence has a very positive effect on the fishery we have implemented our own code of conduct, that ensures that the recreational fishing that we undertake has as a little effect on the fish as possible. There is absolutely no doubt that this has had a massive positive influence on decreasing fish mortality.

On top of that we have become the eyes and ears on the ground, and are proud to be able to provide a presence for monitoring of illegal fishing and poaching activities. This has allowed Gabon Parcs to respond when illegal activities are taking place.

Going back to the average size fish from earlier in this article. Over the last couple years, we have really started to see a massive jump, both in the size and number of fish. Today, an average cubera is 7 to 15 kilos. Fish around the 25 kilo mark are a lot more common, and now an exceptional fish is one over 35 kilos. This fish pictured in this blog post are going to become a more regular feature, and I am sure that we will be breaking the 50kilo mark soon.

So, this cubera snapper tells a story to be very proud of, and it is only the tip of the iceberg. This is conservation in action and we couldn’t be more proud to be an ongoing part of this story.