For the 7th week of the Nubian Flats season-2015, we were joined by a group of 8 anglers all the way from Germany, led by Lutz Schepers.

The wind from the previous week seemed to settle down, and the forecast for the week looked really great. The prediction showed calm winds for most of the week with stiffer breezes towards end. Most of the guys had never really fished for triggerfish before, so were all super amped and really keen for the week that lay ahead.

On the first day, both boats headed for the Big Island for the day. One group to the north, while the other headed down south. The flats had a good current flowing (all things relative on the Nubian Flats) and it did not take long before the first provocative trigger fish tails showed themselves. The calm conditions made approaching these fish quite tricky, but a good stalk and well presented fly was accepted with gusto, with the fish eating hard (more like destroying) the flies we put in front of them. It is not often you get days where the triggers want to almost ‘kill’ anything that moves, but when you do, you certainly make the most of it! The guys fished really well and despite loosing many a trigger to coral and hooks being bitten in half, we managed to get 4 really nice fish to the net. Special mention goes out to Ben, who got absolutely man handled by a massive GT on the right before the end of the day. 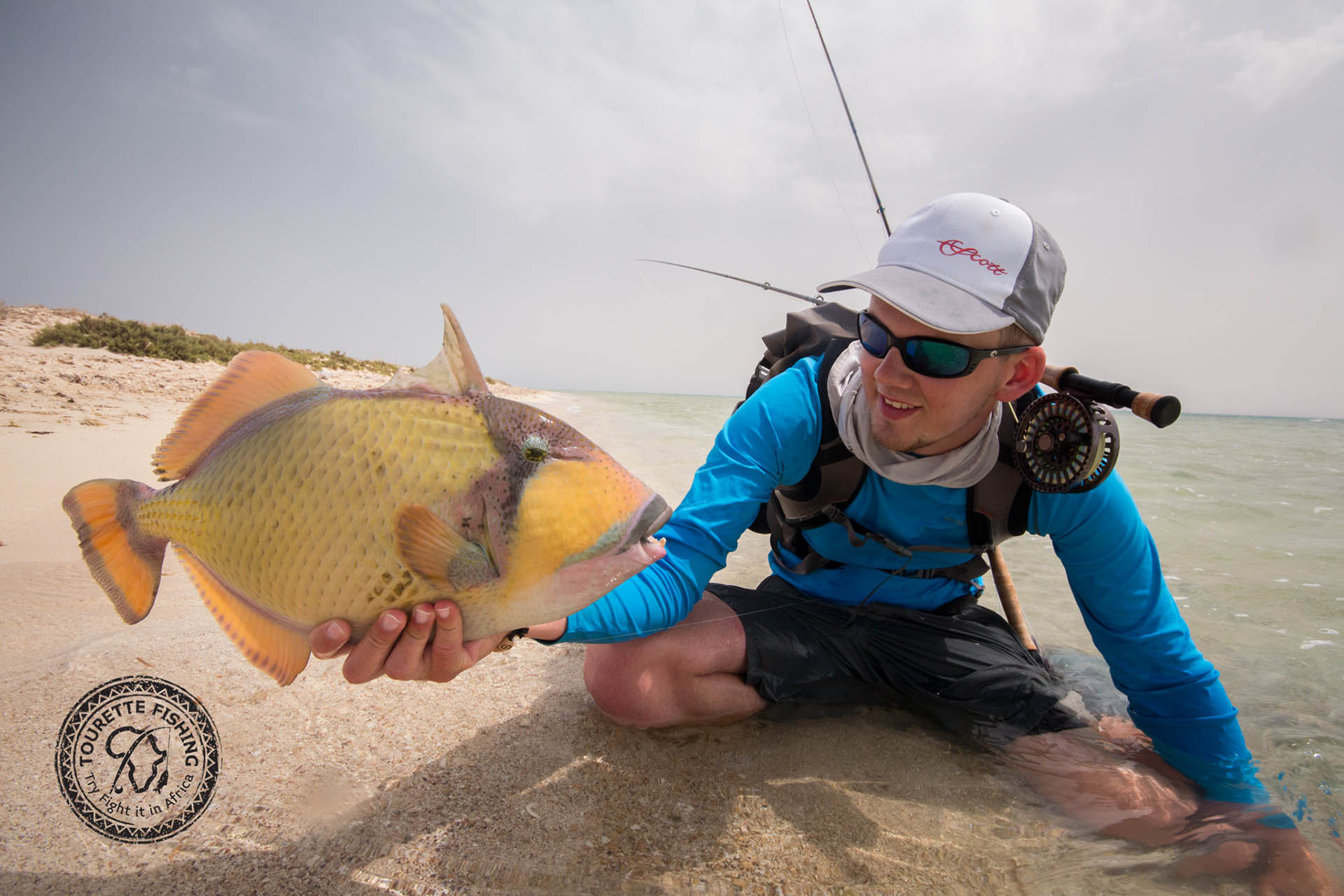 With the good weather still hanging around we decided to do a half day at the Playstation before making our way even more north. The morning session was productive, we saw some triggers, landed one, and also got a nice bluefin trevally on the flat. The afternoon session however, really fired! The flat was completely flooded with triggerfish, and they were in a really bullish mood, showing a real preference to very light tan coloured crabs. The triggers were destroying flies wholesale!!!!! You see a tail, you put the fly down (sometimes as far as 1 – 2m away), trigger darts over, tails hard on the fly and eats. This has then results in a few different scenarios:

In the case of point 4 and the hook finds purchase, guests are quickly shown what their backing knot looks like before the guide is left to chase the fish over the flat in an attempt to land the fish before it comes off, or finds a piece of coral to hide in. If the latter, then the guide dons his mask to try and fetch the menace from his hole underwater. Trigger fishing at its best. The group had a real ball with these fish and by the end of the day, managed to land a solid handful of triggerfish. 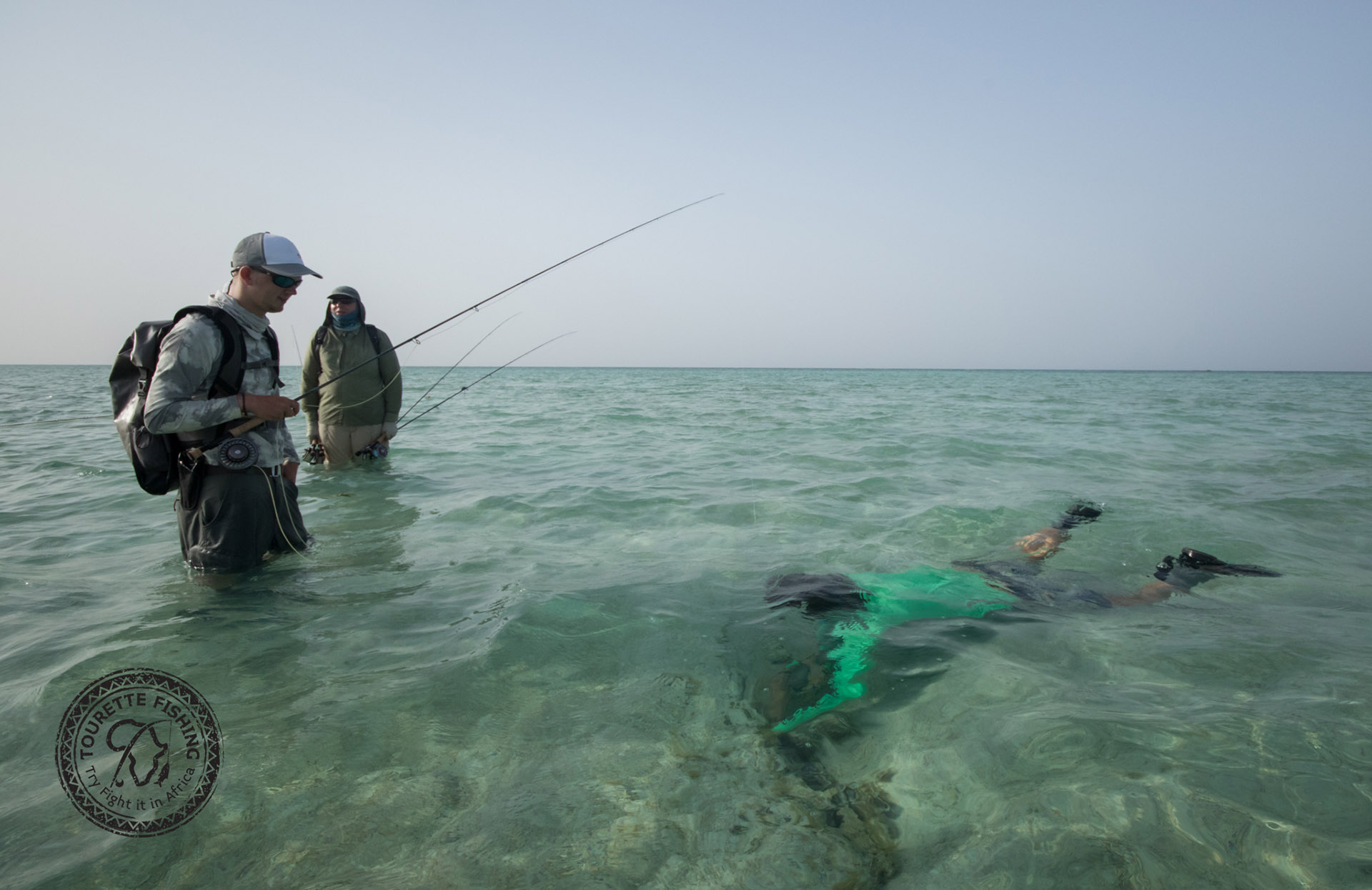 This great trigger fishing continued over the next couple days and the guys continued to land some really nice triggers. In between all the trigger mayhem, we ran into some solid sized milkfish, a couple bonefish and some really good sized trevally as well. Both bluefin and giant.

Special mention goes out to Joern who landed a brute 100cm GT on the flat. After eating the fly, the fish took off at the speed of light, heading straight for the coral edge. Joern thankfuly brought his A-game to the Nubian flats and dominated this GT it in spectacular fashion. 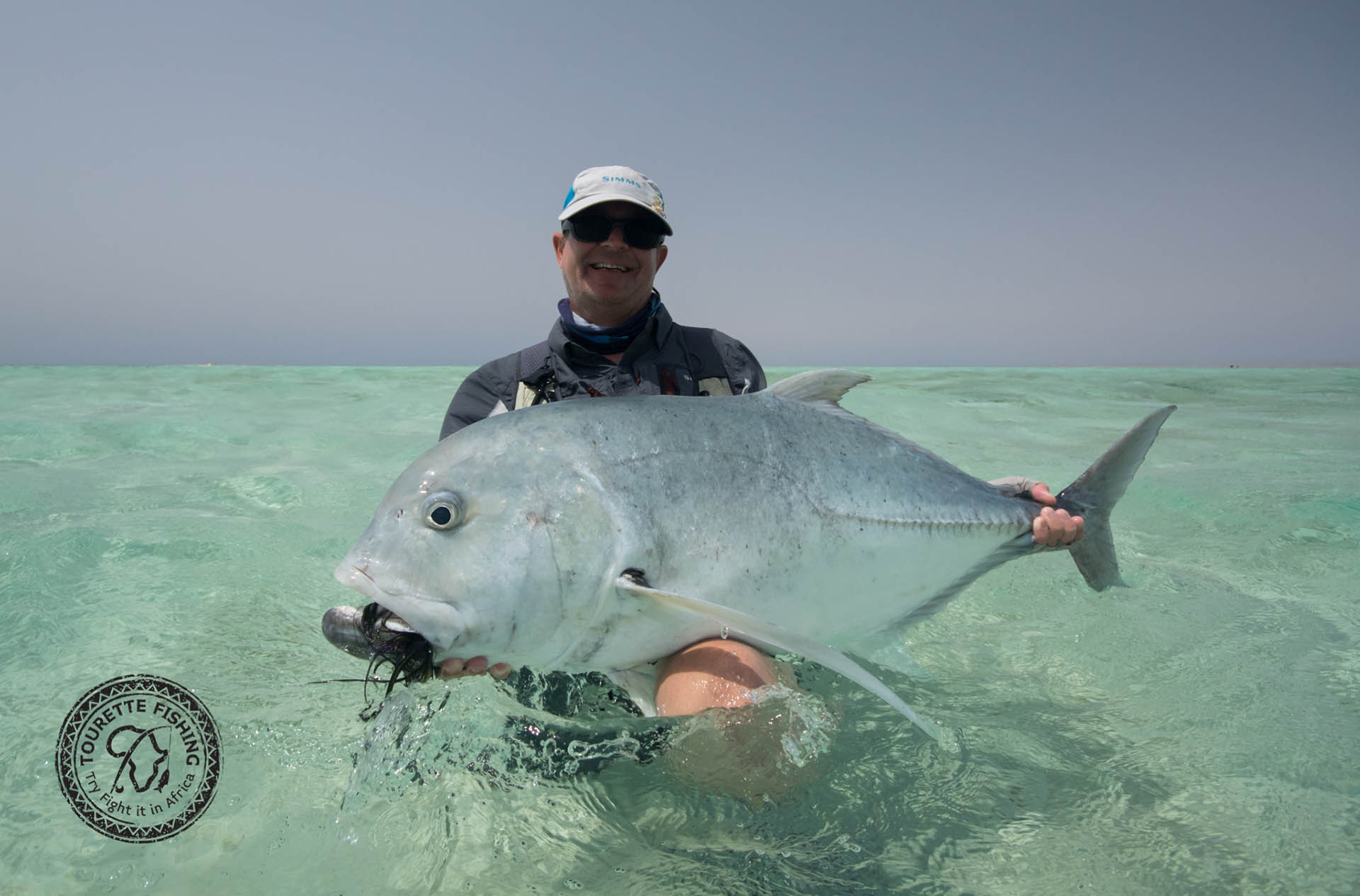 There was some serious current in the area as well, and made the teasing sessions exceptionally good. Some session were so wild that we spent more time re-doing leaders and tying on new flies than actual fishing. Shoals of trevally would come in on the tease, all three guys would go tight, then chaos! We landed some really good fish and got smoked by even bigger fish in access of 100cm. The guys landed several GT’s and bluefin trevally with Lutz taking the honours by landing a superb 90cm GT in one of the most tricky and rocky areas. 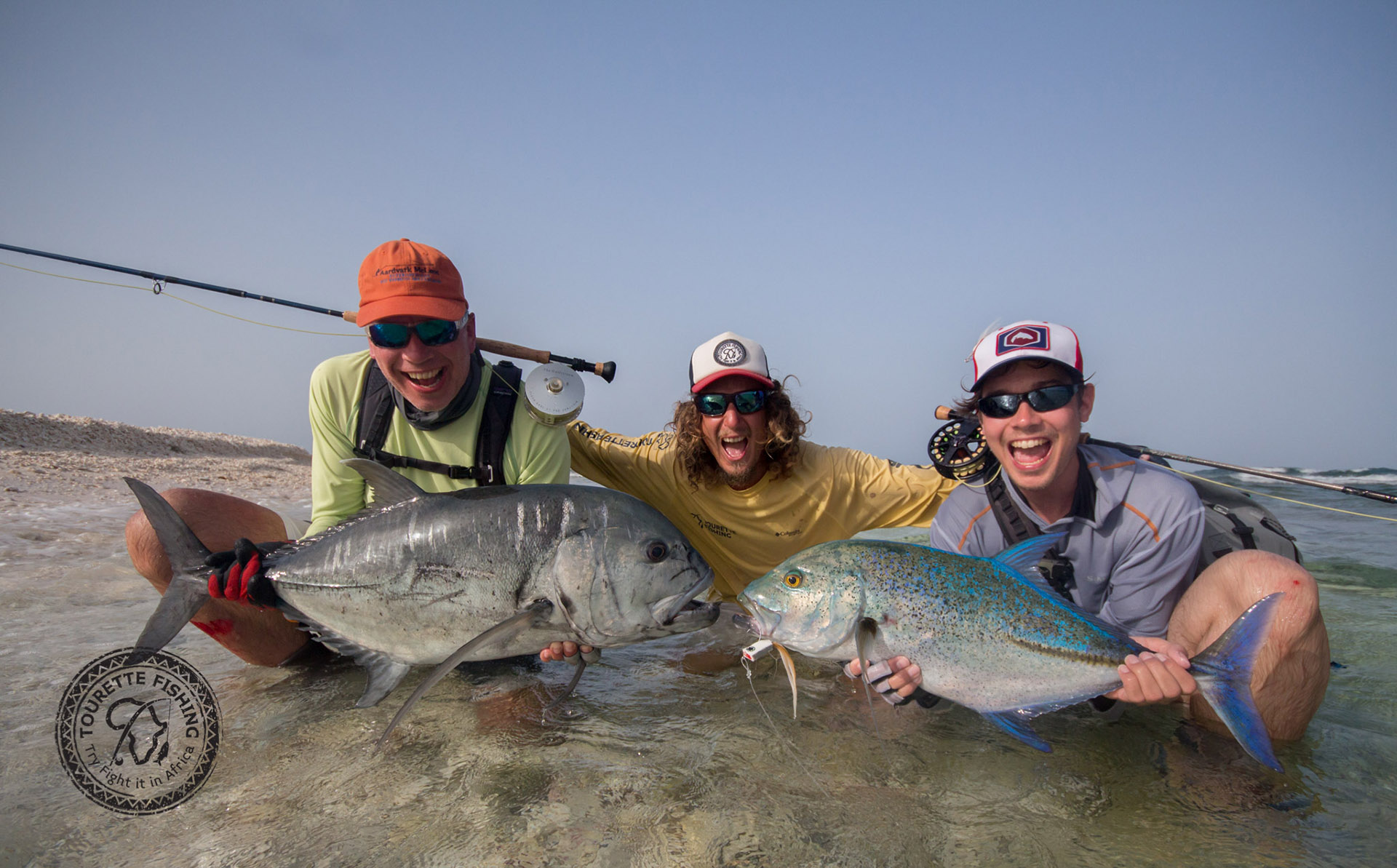 Lutz(left) and Ben(right) with guide Fede, cashing in on the aggressive fish on the tease with this great GT and Bluefin double

On the final day the wind started to pick up again and we were back fishing in the sheltered areas of the Big Island. The triggers were still out in good numbers but this time round, even more aggressive than earlier in the week. In complete contrast to the rest of the season proceeding this week, they were showing a real liking in hot orange crabs, fished fast. On any given day the triggers of the Nubian Flats avoid orange like the plague, but when they do change their minds, it’s crazy how aggressive they become to this colour. Again our flies got destroyed one after the other, but by the end of the day, we managed to bag 4 really big triggerfish bringing a very successful week, to an end. 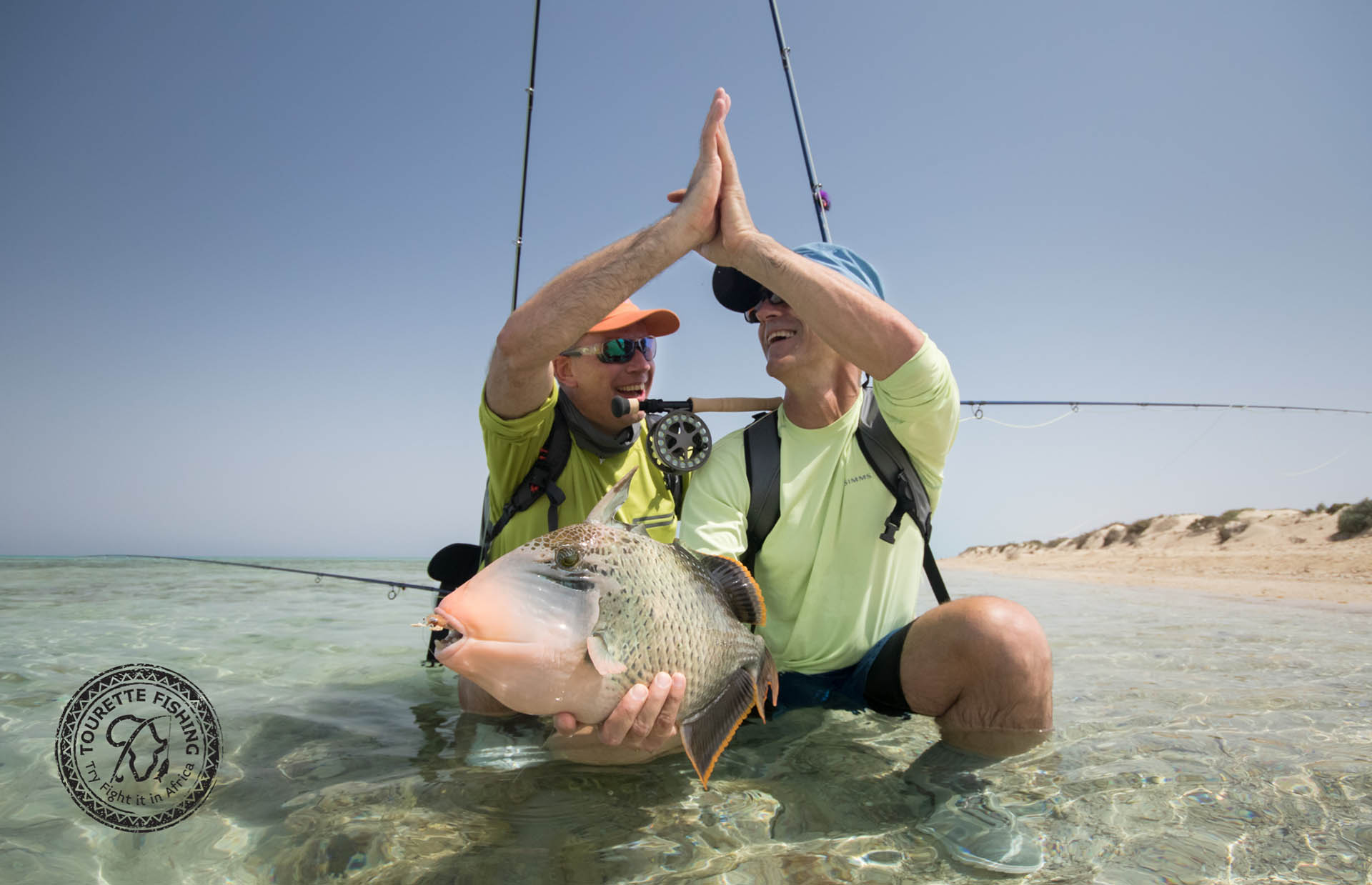 Nothing beats sharing a wonderful fly fishing experience with your buddy. This yellow margin trigger was reason to celebrate

A big thanks to the wonderful group of fly fishermen from Germany. It was a pleasure having you with us, and we look forward to having you back in the future.

That’s it for now but be sure to check in again next week for another update. If the conditions continue, we are in for another cracker week! 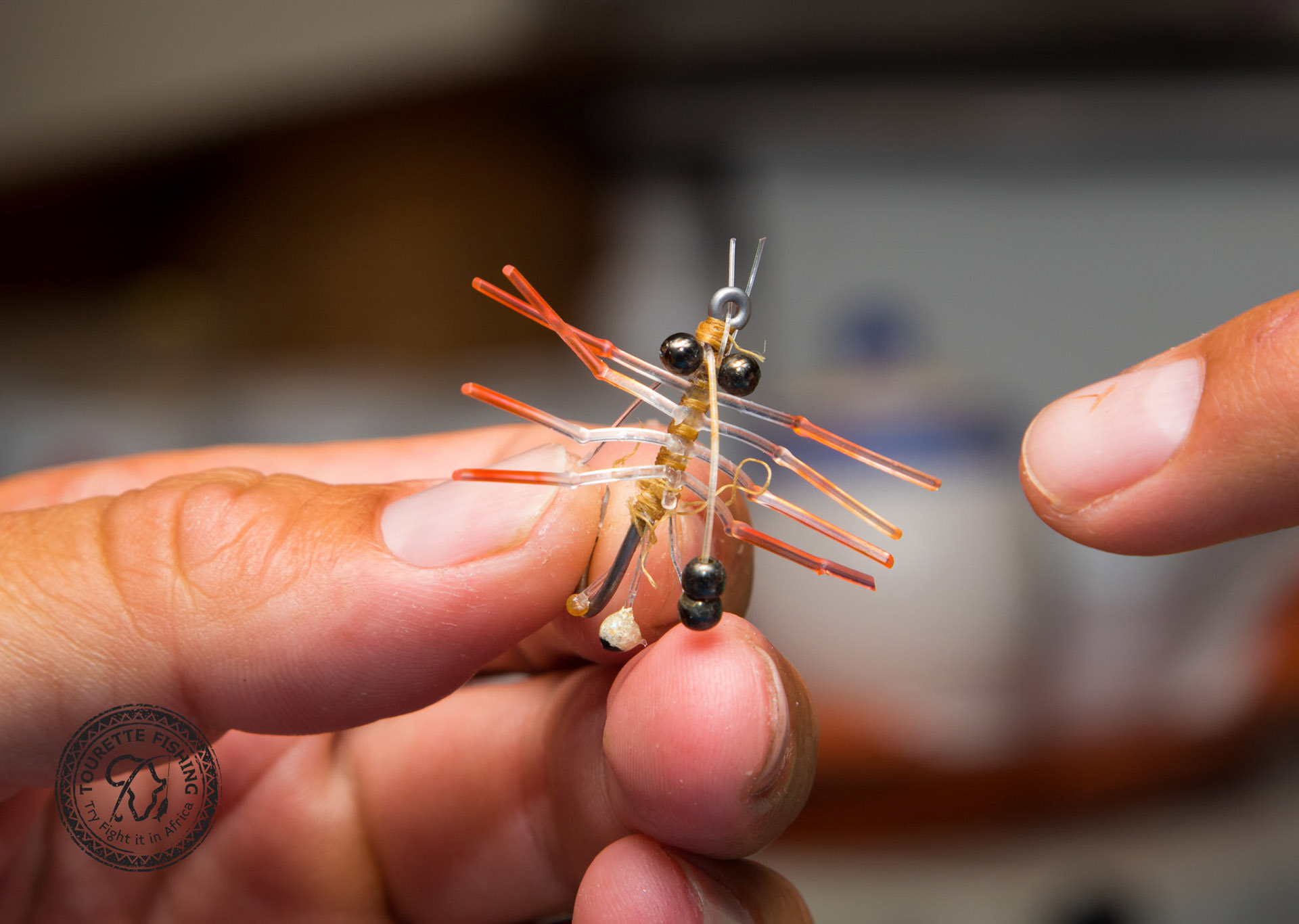